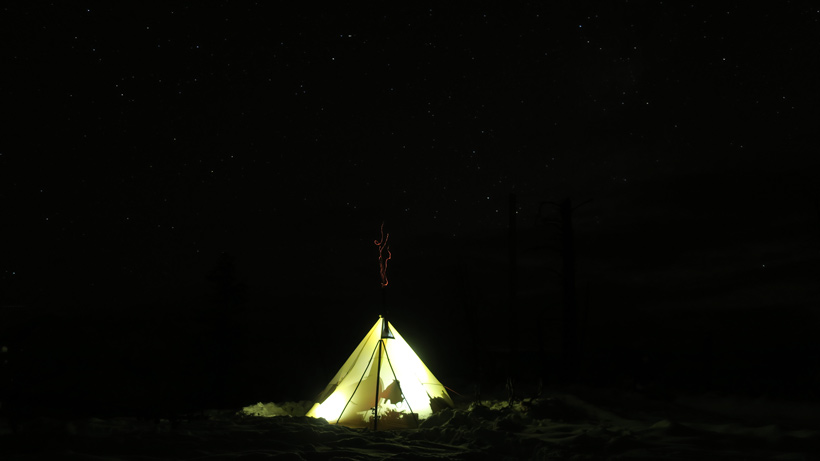 The forecast for the week in early November was in the teens at night and around freezing during the day. Although the weather would make it tough to keep warm and prevent water from freezing, our anticipation for the hunt was high. The cold temperatures and snow that had already blanketed the upper elevations would be the perfect recipe for prime mule deer hunting.

We started on the trail from our drop location in the wilderness of Central Idaho mid-day to chase rutting mule deer for a week. We had a vertical climb of over 3,000 feet during our five-mile trek to reach our camp spot. We navigated nervously in frigid waters, crossing a river at the beginning of the hike. The trail was clear of snow at the river then, gradually, amounted to over a foot by the time we arrived at camp. We used headlamps to guide ourselves through the snow over the last half-mile as darkness fell. Once at camp, we cleared a spot with our boots to set up our tent and backpacking stove. After setting up camp, we enjoyed a meal and prepared our packs for the upcoming day. 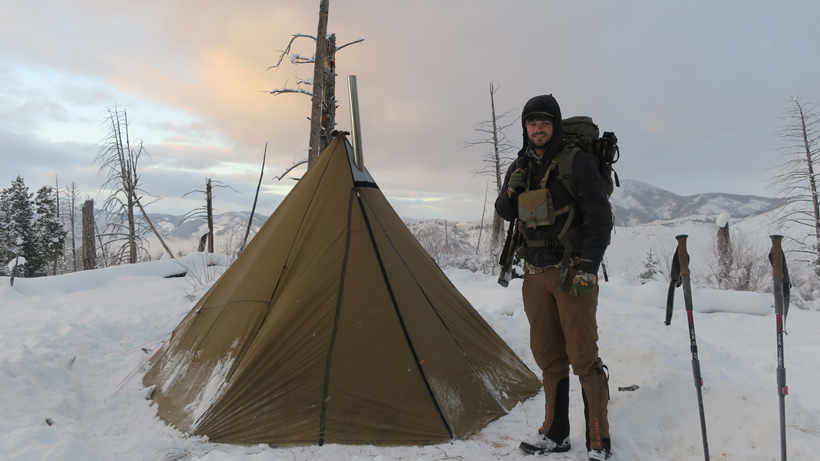 Waking up to the sound of the alarm clock and the bite of the cold temperatures, we slowly crawled out of the warmth of our sleeping bags to begin our hunt. The water in our bottles for the day was slushy but drinkable. We had hunted the same area the year before so we were familiar with it and knew where each of us would be sitting on the first morning. We glassed from our vantage points for most of the morning and afternoon. I instantly put on my insulated down pants and top to keep my body warm, but there was no hope for my frozen feet. Deer were moving from first light to mid-afternoon with bucks chasing does. The rut seemed to be in full swing.

I looked over a dozen bucks, but nothing had sparked my interest. Then, on the top of a finger ridge that ran through the drainage below me, I saw a solid framed 4-point that had a split G3 and eye guards making him a 5x4. He was high on my list. It was mid-afternoon at this point and the buck was a mile away and would require a descent of 1,000 feet to get in position to shoot. While trying to decide whether to go after him or not, he made the decision for me as he disappeared chasing a doe over the ridge into thick timber.

I returned back to camp to grab a bite to eat and found my hunting partner for the trip, Clint Vetsch, catching up on some lost sleep from the comforts of his warm sleeping bag. He awoke as I approached the camp, and we both spoke of the same split G3 deer we had seen. We had a friendly disagreement on who saw the buck first as he was much bigger than anything we had seen the year before. We broke from camp to glass together from where I had been sitting in the morning; we saw more bucks of a lesser caliber throughout the evening. Upon returning to camp for the night, we enjoyed a warm dehydrated meal and came up with a game plan for the morning. His glassing spot was the closest to where we had both last seen the buck. We decided to both go there in the morning.

We awoke to cold temperatures and half frozen waters, but bundled up and sprung out of bed in excitement at chasing the split G3 buck we had both seen the day before. After arriving at the glassing spot, we quickly threw up our binoculars and glassed, trying to be the first to spot him. There were a silence and intensity in our eyes behind the glass. Once we had completed a quick scan, nothing had shown up other than a couple does and no bucks. However, moments later with the binoculars glued to our eyes, I spotted what I thought was him on a small hillside about 800 yards below us. I didn’t bother to take a glance at him in the spotting scope as I saw through my binoculars he was a big framed 4 point. 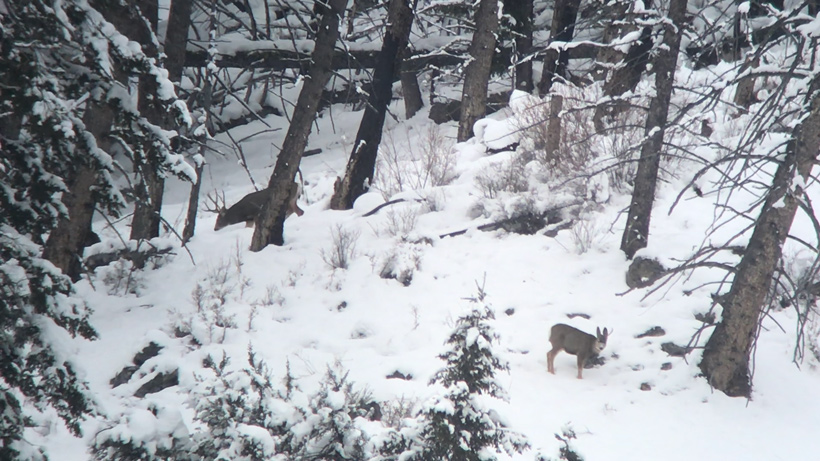 The buck was chasing a doe and there were many other does in the area. Knowing he would be focused on rutting, I told Clint I was going to move into position to get a shot. I slid my way down the snowy hillside, which was littered with deadfalls, and got into position. I pulled my pack over a downed log and steadied for the shot as the buck moved towards the top of a small hill. I took the shot and we were both sure that I had made a bad shot and missed. We decided to go over there and take a look for blood to be certain. When we arrived, we confirmed our feeling of the miss as we followed the tracks and were unable to see any blood.

While milling around disappointed in the miss, Clint stopped me and said, “Wait, do you hear that?” A split second later I glanced at a nearby hillside across from where I missed and saw the buck grunting repeatedly and pushing a doe up the hill. I was in range and dropped to the ground and positioned my gun over the pack and pulled the trigger. The shot sounded like a hit, but the buck was still on his feet. I loaded another shell and shot again to have the buck drop in his tracks with a fatal hit. We high-fived and were elated to have taken a respectable buck in the beautiful Idaho backcountry. 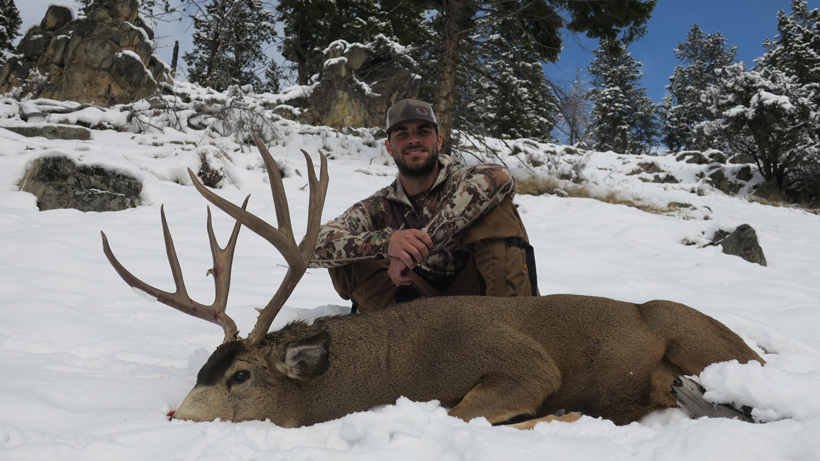 We both thought it was the buck we had seen the day before and headed over to begin breaking him down and packing him out. Walking only a couple hundred yards from where I shot, I saw the silhouette of a quality buck’s antlers against the snow on the same hillside my buck lay dead. I put my binoculars on him and was surprised to see what I thought was the split G3 buck we had thought I had killed.

Clint got into position to make the shot while I dug my spotting scope out of my pack. Once I had the spotting scope on him, I confirmed he was the split G3 buck and Clint knew it was the buck he wanted. He was able to lay prone and make a perfect shot to take down the buck in his bed. 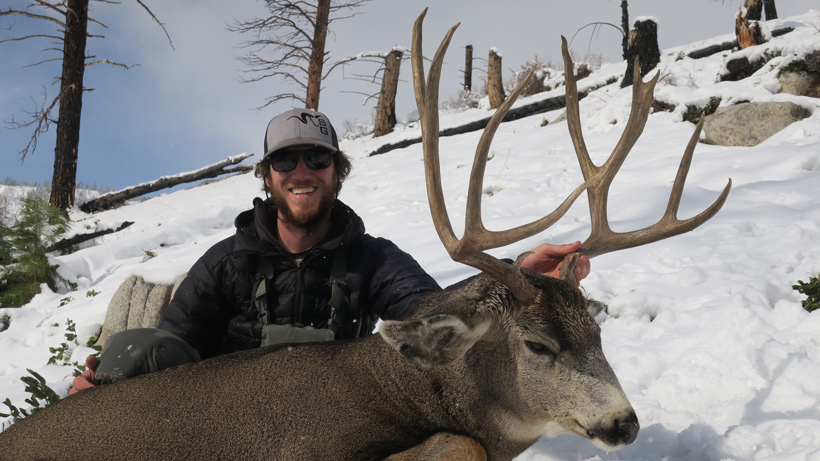 The bucks were both bigger deer than we had ever taken and we shot them on the same day, moments apart and only a few hundred yards away from each other. We were both on Cloud 9 and excited for each other’s success, but also knew we had a lot of work ahead of ourselves.

Arriving at the bucks’ mid-morning, we broke them down and boned them out one at a time and loaded them up in our packs. Clint’s buck was the split G3 buck with a 25” outside spread. Mine turned out to be a main framed 4-point with a 3” kicker off the right G3 and had an outside spread of 23.5” with large front forks. 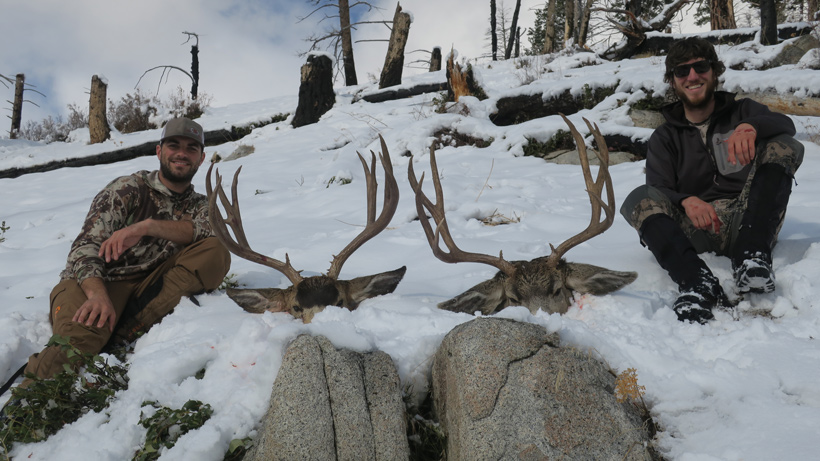 We had to drop down the hillside we were on and travel up a steep climb to get back to camp. Making it to the bottom while skiing on our boot soles and staring at the nearly vertical hill to come seemed like a daunting task. We tried to make it up the knee-deep snowy north slope in one trip, but we soon realized about halfway up that two trips would be necessary. Arriving with half of each deer that night, we lit the woodstove to warm up and tipped our cups of victory juice in cheers to one of the best days of hunting we have had. The next morning, we went down and packed the rest of the meat up to camp with grins from ear to ear.