Bowhunter's journal: Memories made on the mountain 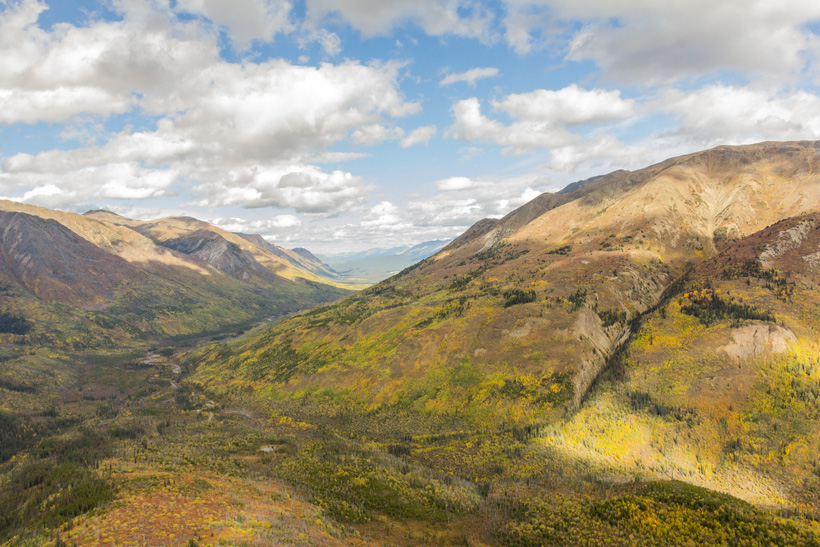 It was now day four of my British Columbia hunt with my dad. We were hunting with Folding Mountain Outfitters in the Northeast portion of BC. Even though we were having unseasonable warm weather, the first three days were action packed. 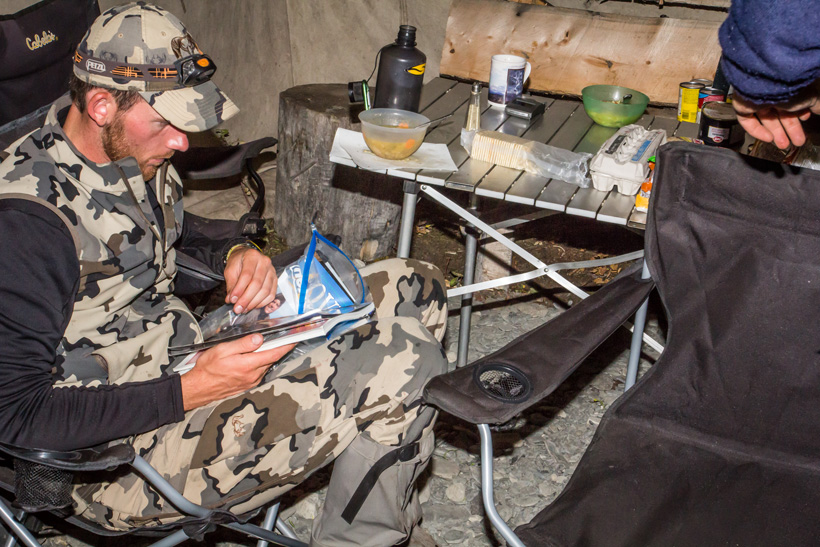 We started the morning with another hearty breakfast, but much to our disappointment, the rain and fog settled into the valley and we were stuck at camp all day. We tried going out several times, but the wind and rain made it tough for our calls to carry the distance. So out came the hunting magazines and books to pass the time. 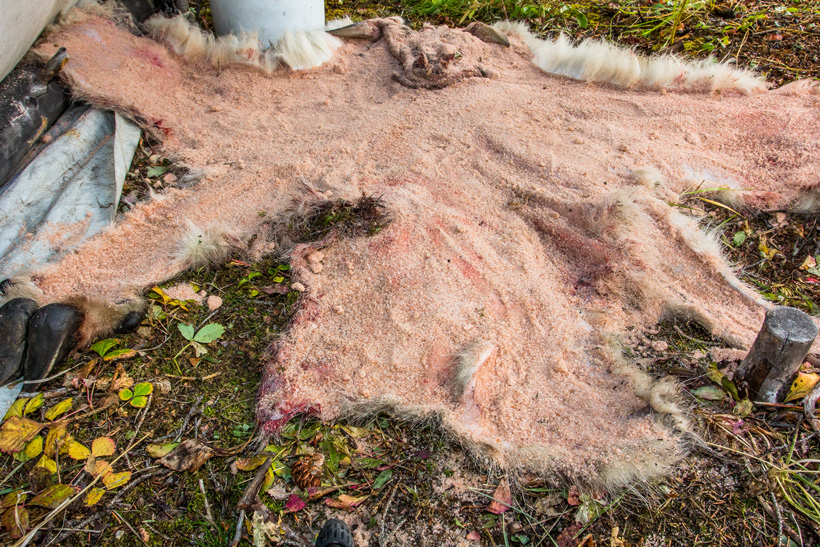 We also took some time to prepare and salt my mountain goat hide. 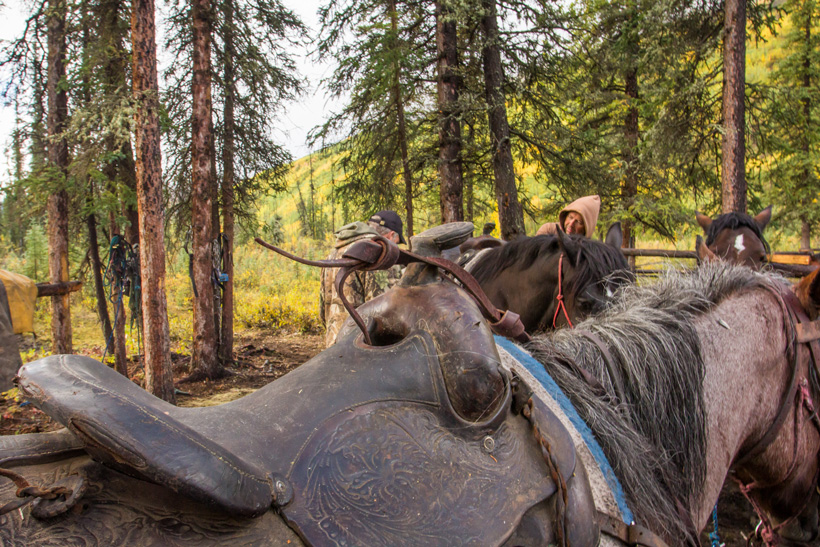 In the early morning light we rode the horses toward the famous “moose knob.” We glassed all morning and only turned up a small bull I put a stalk on during the first day of the hunt. Later in the afternoon we glassed up a phenomenal bull moose! We spotted it to the north of us about a mile away, so the stalk was on. We grabbed the horses and started the ride down through the thick alders. 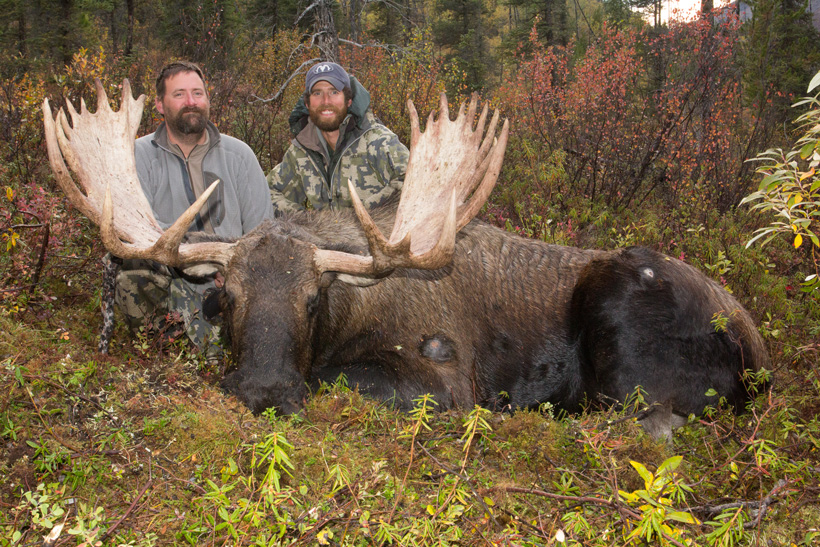 We only made it a quarter mile when we heard a shot then lost sight of the bull. The other hunter in camp, Dan, must have been hunting the same bull. We continued down the trail and worked our way to the location of the bull. Sure enough, it was who Dan took the massive bull. We helped take some photos and then headed back out to locate another bull. 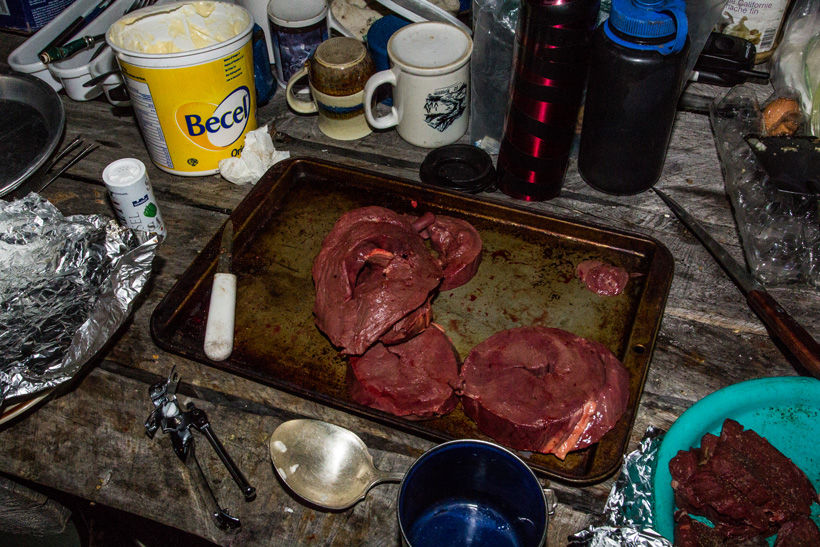 Dinner that night was fresh moose heart cooked on the cast iron skillet. I was blown away by the taste of moose heart. I can’t wait to enjoy heart in the backcountry again someday. 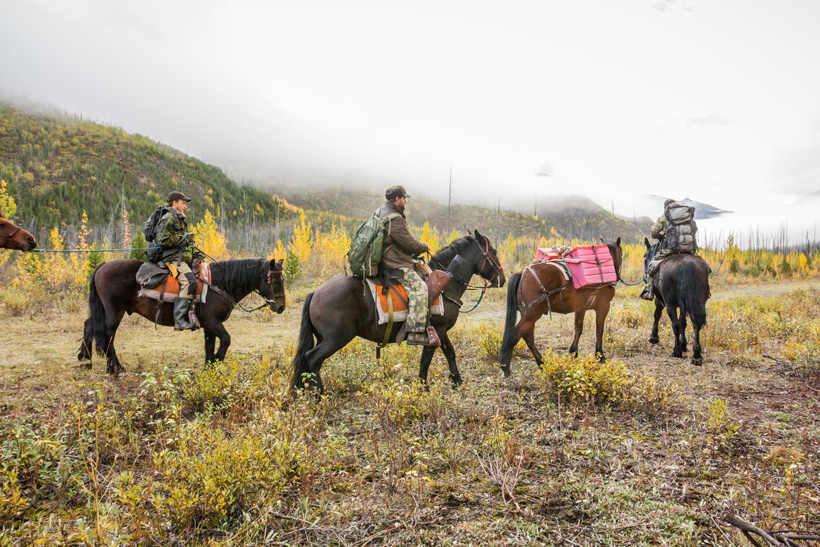 After the excitement yesterday, we hoped the bulls were starting to move and locate cows. Dan and his guide, James, headed out to pack out their bull moose. We cow-called and raked brush in the low country in hopes of getting a rutting bull to make some noise. 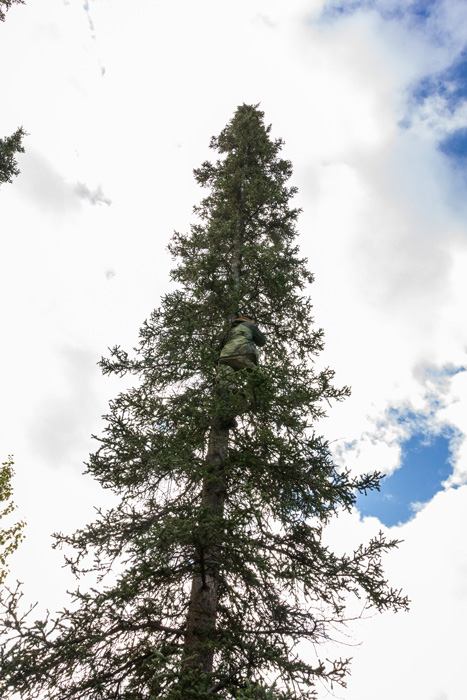 Our guide, Barrett, even climbed up a tree in hopes of finding a bull heading our way in silence. 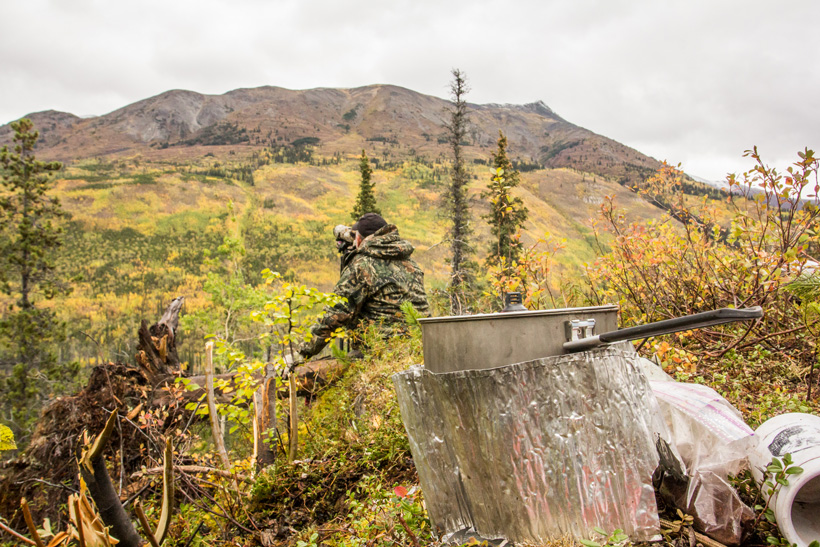 This morning we rode the horses to the area where Dan shot his bull, which was called Skunk Knob. 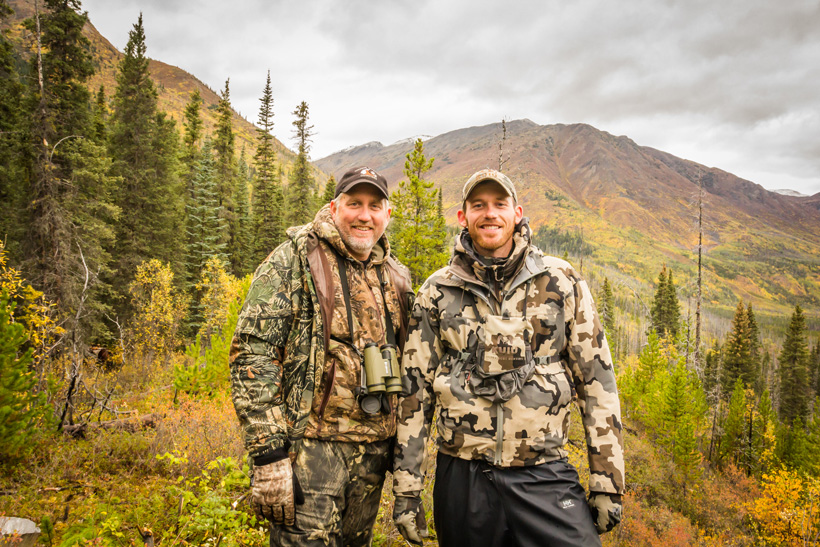 We spent the day glassing, drinking coffee and making food on the mountain. In total, we only glassed up two cows, a bunch of black bears and two grizzly bears. 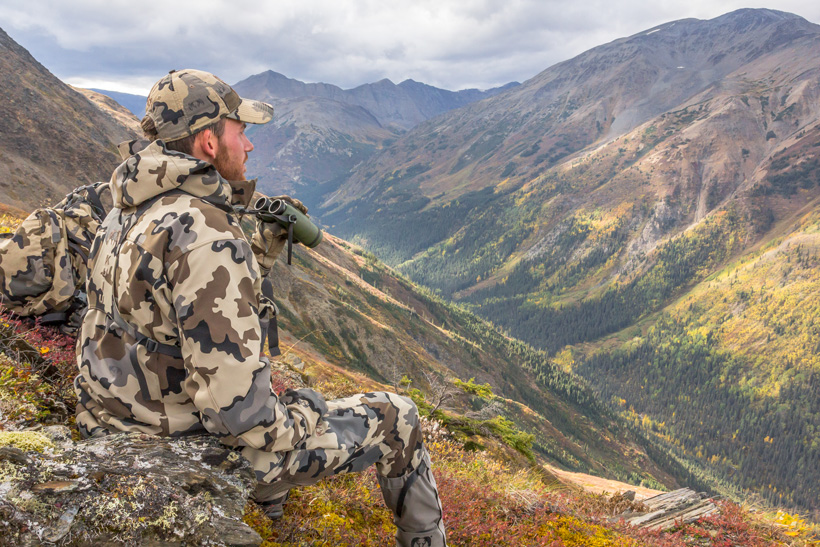 After the morning of calling and glassing from the bottom, we hiked up Moose Knob to glass for the rest of the day. 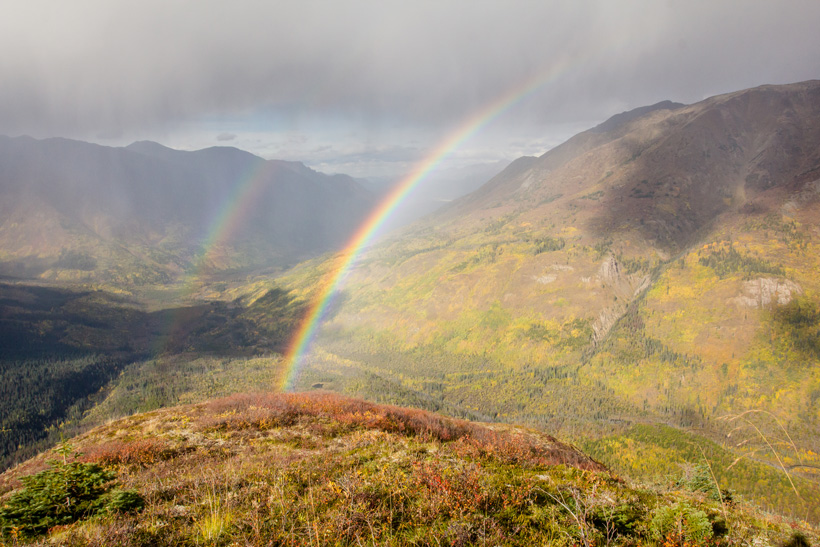 We only managed to glass up four mountain goats and two cows. The action was slower than expected and we were desperately in need of a weather change. 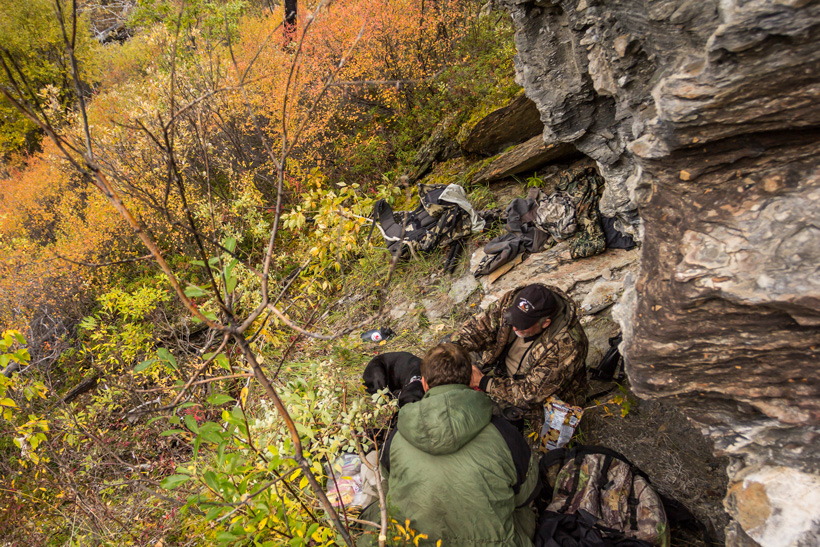 We got up earlier this morning and started the long two-hour ride to a new location. Although the area looked promising, we didn’t find a moose the entire day. We had times of heavy rain and spent most of the day glassing next to a rock cliff to block us from the wind and rain. 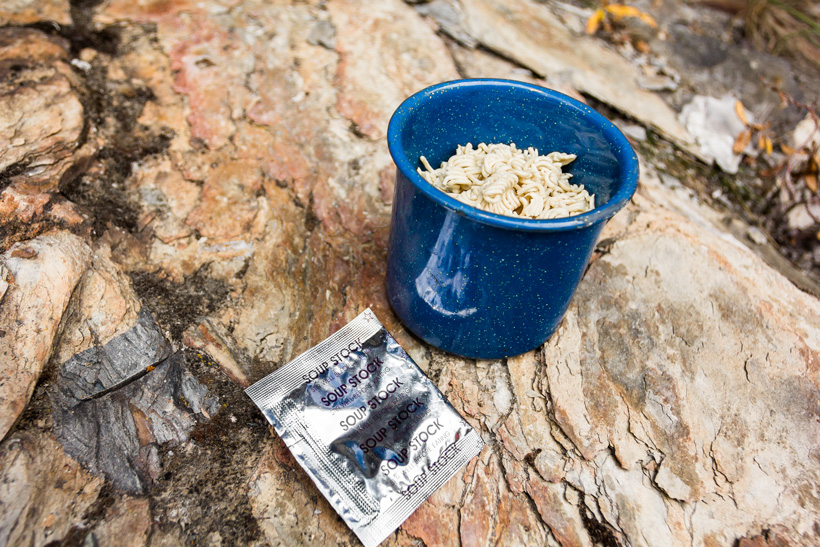 Lots of coffee and ramen noodles were consumed this day. 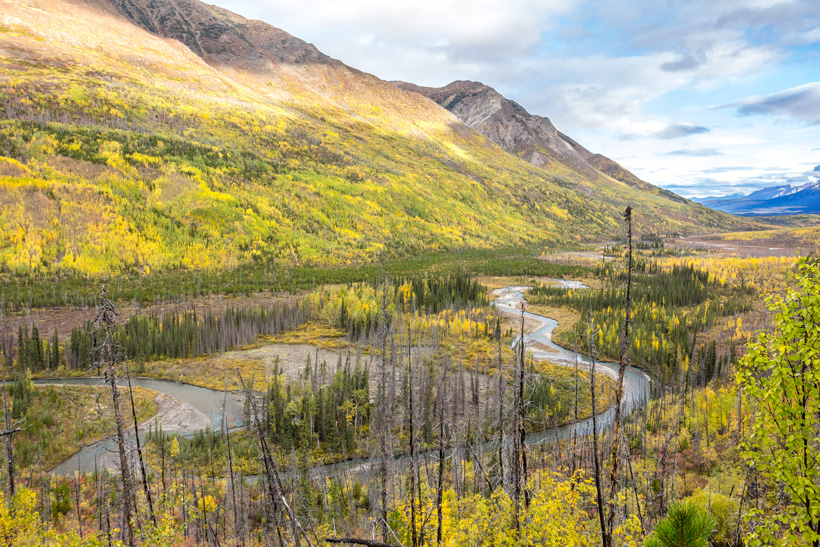 We decided to switch it up today and make a new glassing knob to the northeast of Moose Knob. We hiked up the steep face of the mountain to a small rock point and started to clear some deadfall to have a 300-degree glassing point.

This glassing knob gave us great views of the surrounding valley floor. We were able to glass down into the river bottoms and we decided to sit here all day if needed. 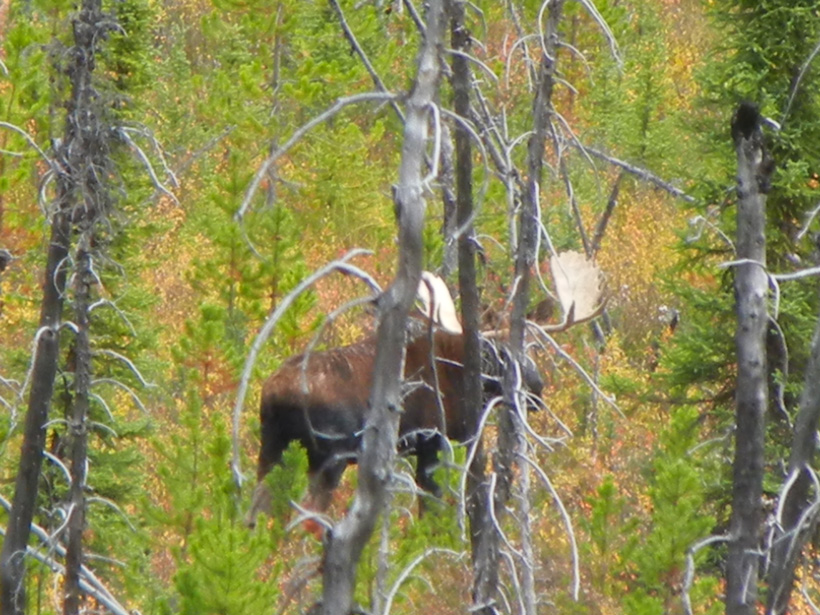 Finally around noon we glassed up a great old bull. We had the spotting scope on him, but needed a closer look. We saddled the horses and rode across the river. After tying up the horses we started our climb to get above the moose. 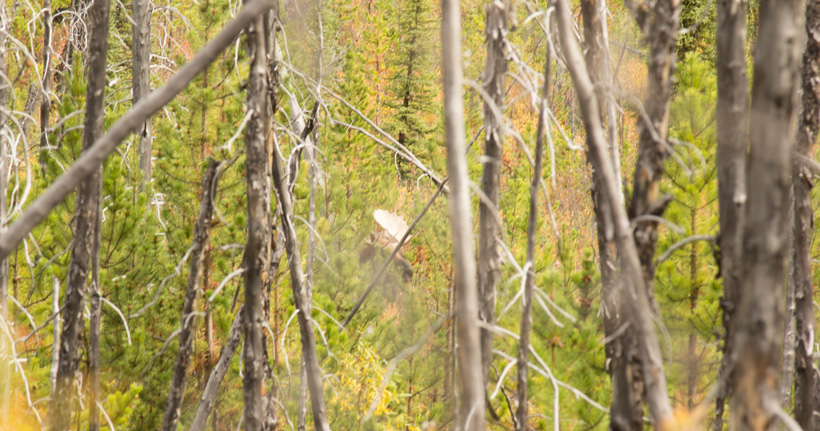 After getting into position, we noticed that the bull was very old with giant palms. Unfortunately, the bull was all rubbed off on the palms and and did not meet the 10 points or 3-brow-tine- minimum on one side. There was nothing we could do but watch this bull walk out of our lives. Later that night we called in another small bull to 40 yards, from all the way across the river. Calling bull moose is such an adrenaline rush! 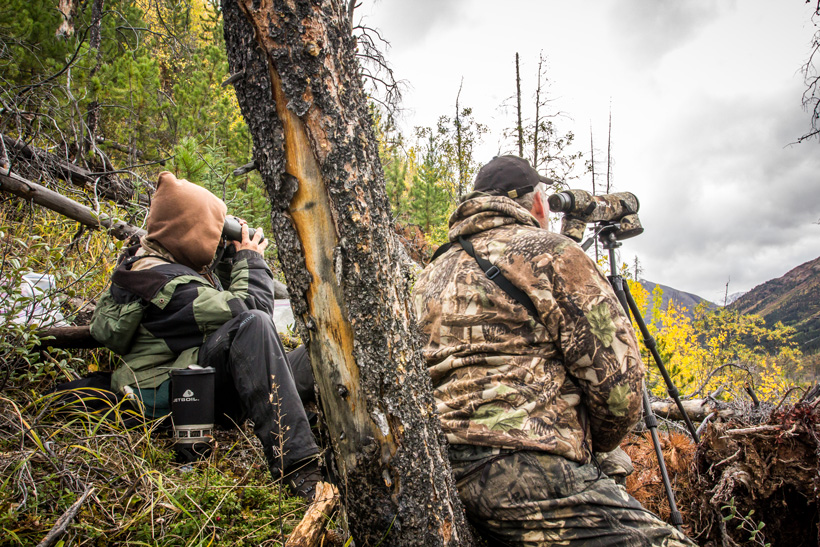 We were back at it on the new classing knob we created. After a short period of time we glassed the same old bull with the rubbed palms and his three cows. 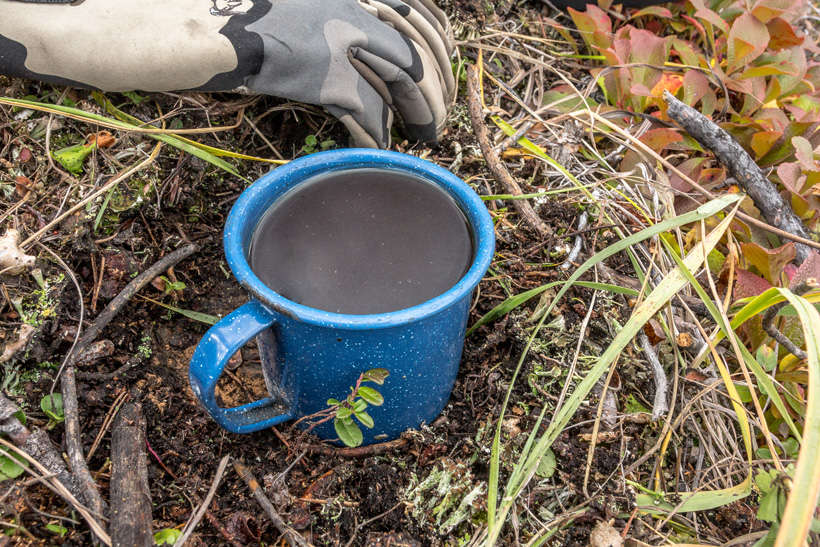 Lots of coffee was consumed this day as we battled some rainstorms. 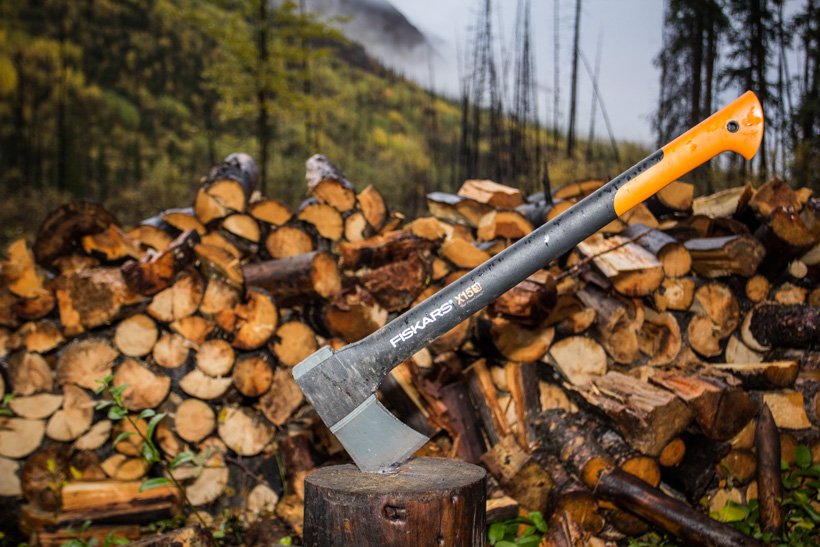 Another day, and the same story as the day before. We were starting to get down to the wire on hunting days. Tomorrow was our last full day of hunting. 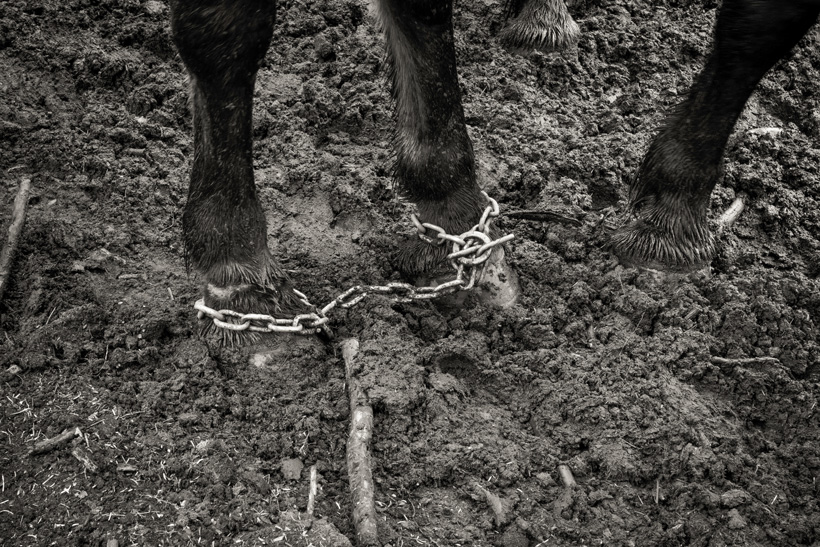 This was our last day of hunting. We saddled the horses in the early morning light and started our long ride back to Moose Knob where we would spend the rest of the day glassing. We almost made it to the top of Moose Knob when the horses started to act a little strange. Shortly after, we heard a bull moose grunting nearby. 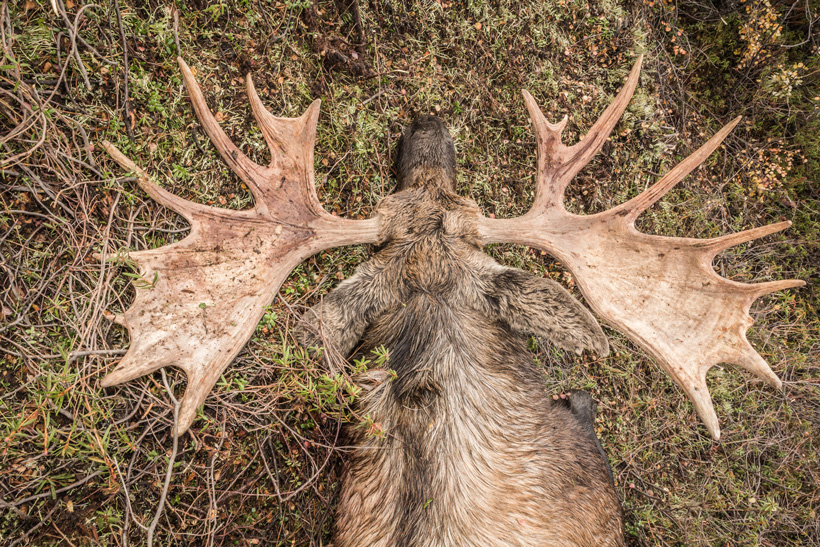 After quickly tying off the horses, Barrett started to call back at the bull and had the bull coming in on a string. 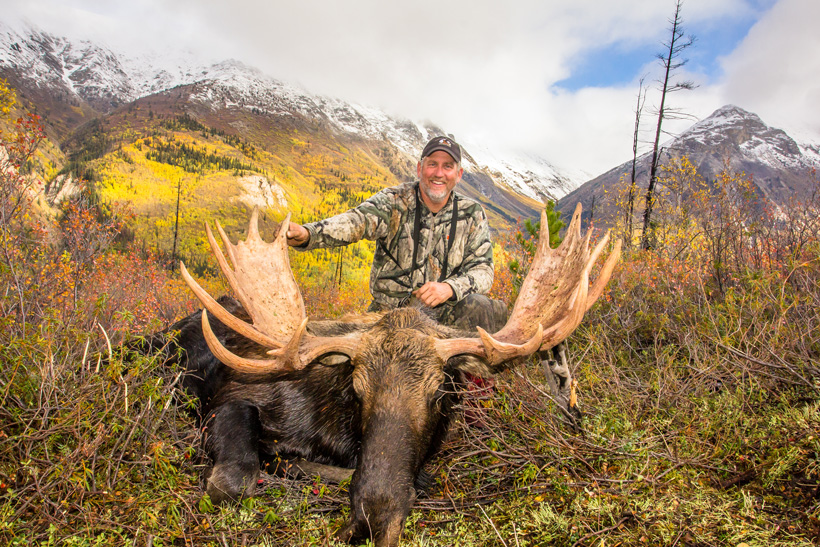 The action happened fast, and at a very close range. The bull was grunting and swaying his massive set of antlers back and forth with each step. Soon enough, the bull was under 30 yards. I kept telling my dad to take the shot because this was the last day. 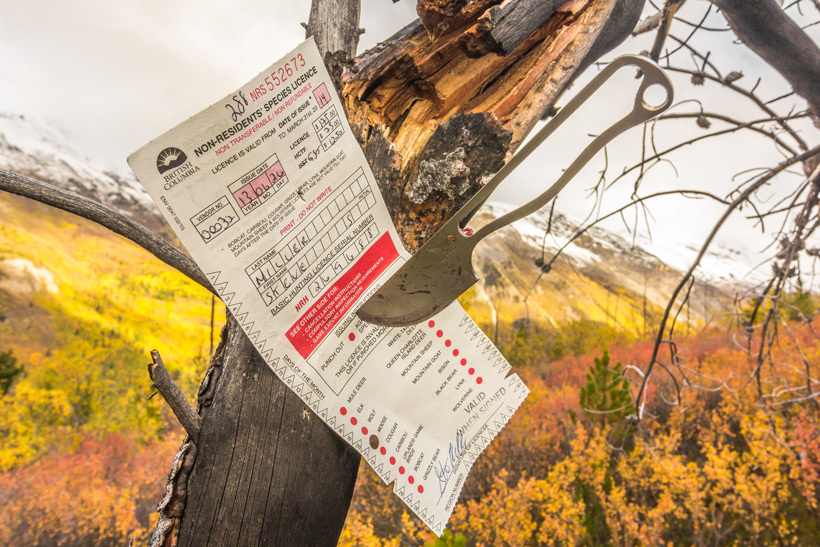 My dad and I took a few steps toward the bull when he was at 20 yards to get him to turn broadside. The shot rang out of my dad’s rifle, dropping the bull in his tracks. 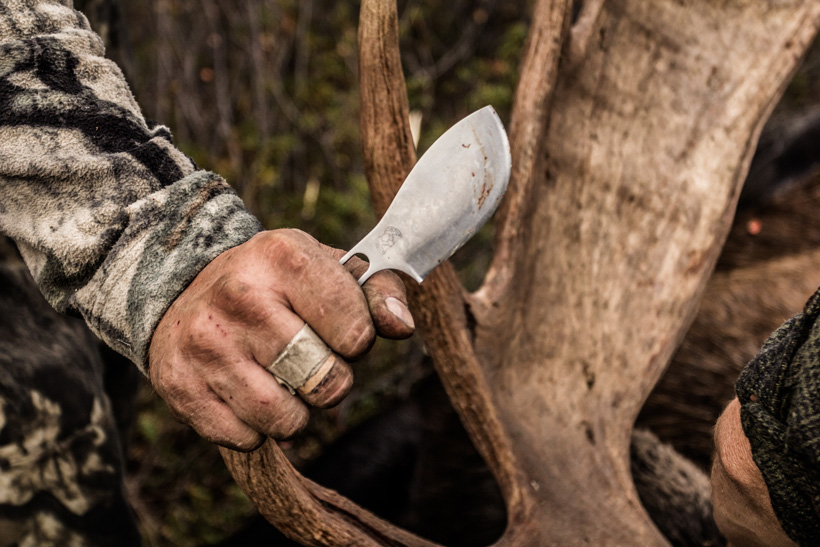 Just like that, the two weeks of hunting came to an end. 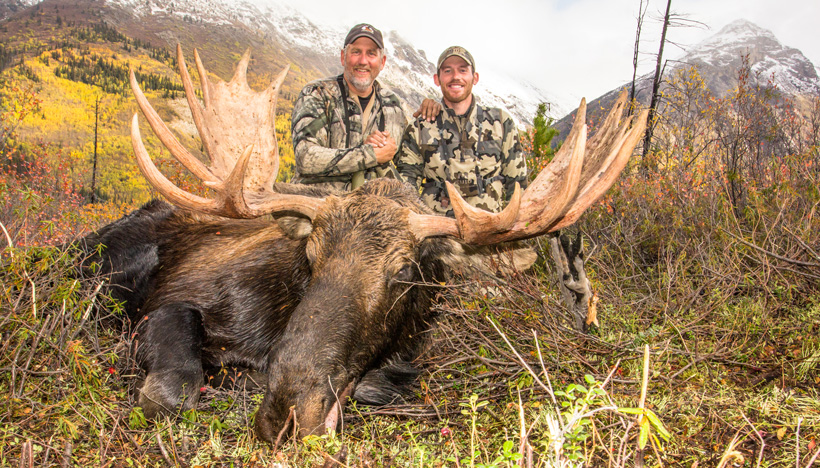 Hunting is truly the ultimate adventure. Being by my dad’s side for two weeks of mountain hunting is something I will never forget. 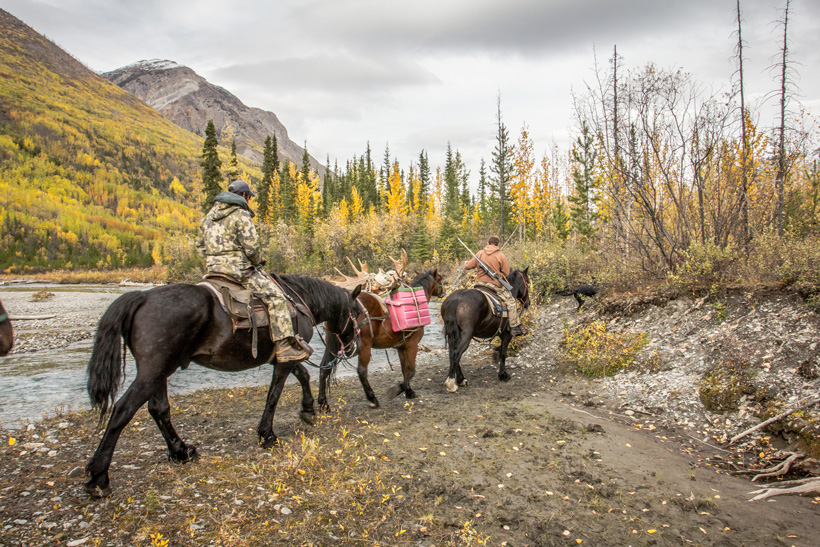 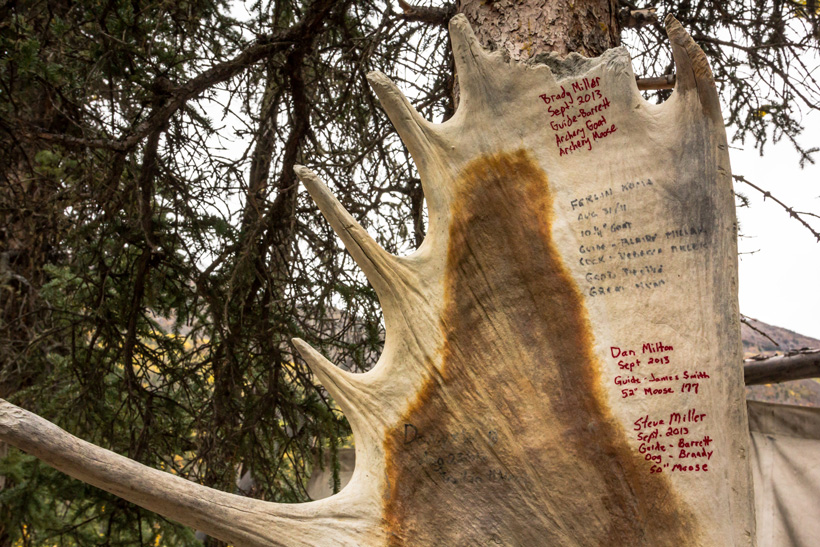 The backcountry means so much to me, and having it end like this is truly bittersweet.