Beating the odds on a Montana bighorn sheep hunt 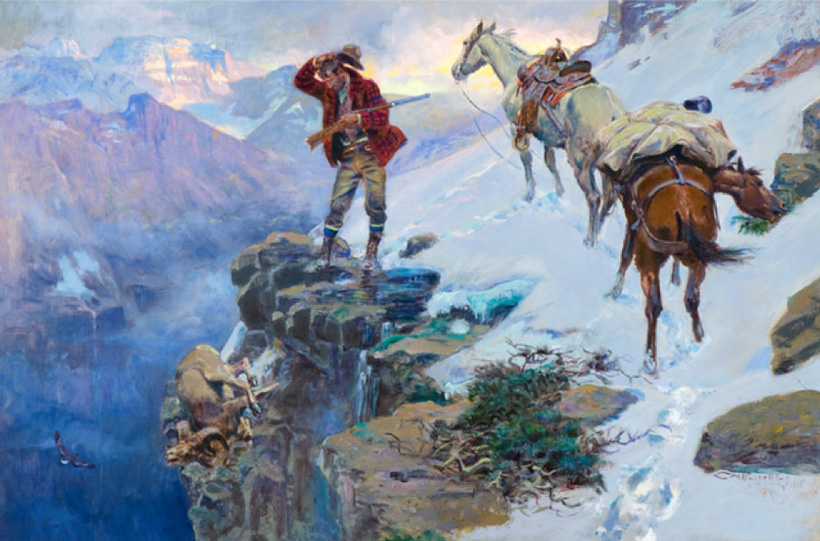 As the stalk began Bill mentioned a few words of wisdom from a Charlie Russell painting: “Meat isn’t meat until it is in the pot.” He couldn’t have been more right. As with any hunt there are plenty of things that can unravel at any time. By the time we got within rifle range, it seemed like what was once a sure thing was now up to luck as the band of rams were on the move and fast.

This story is written about a day full of memories shared with a brother and a father on a sheep hunt in Montana. Bill has battled with multiple sclerosis for years and was able to finally draw a glory tag in his home state of Montana. He was thankful that his legs had enough gunpowder in them to see him through the hunt.

As with any hunting expedition, the alarm clock gets set pretty early. The day was going to begin with a boat ride upriver in search of a quality bighorn sheep. We were going to be running the river fraught with boulders and hidden gravel bars. To add to the difficulty level, the river is chocolate milk, which makes “reading the river” nearly impossible. To add to our good fortune, the morning fog had rolled in and now had taken the river from a black diamond to a double black. Having quite a bit of jet boat driving experience, I wasn’t overly concerned. I just didn’t want to get welded to the bottom on rocks before making it to our hunting spot. I have heard plenty of stories with guys stranded for days on gravel bars as well as plenty of others with guys tearing out their impellers. Everyone has a boat story if they have hunted that country long enough. 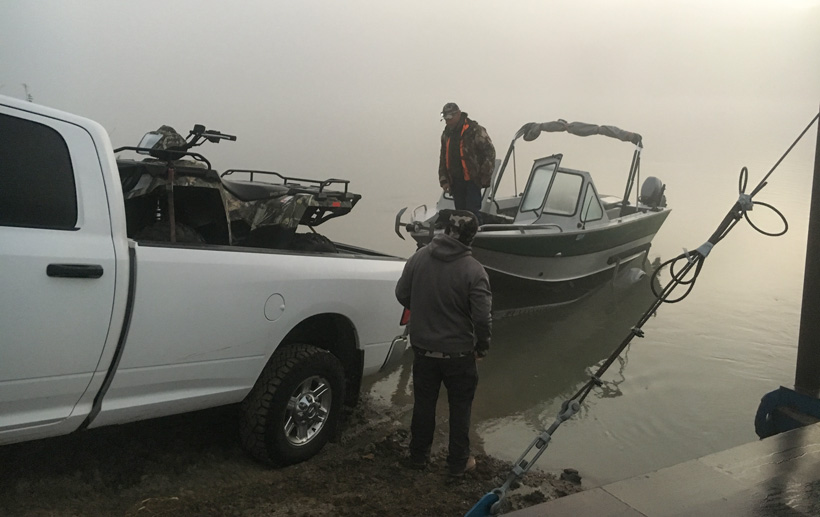 Launching the boat in the dark, shrouded in fog was a chore. You couldn’t see anything—not to mention it isn’t a boat ramp; it’s just a shallow bank on the river. After having my truck backed out to the bumper and shaking the boat off the trailer, we were in business. 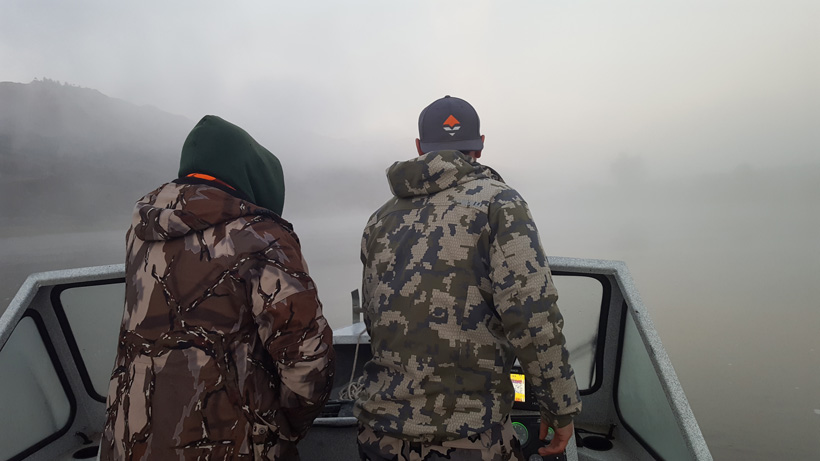 The adventure began once we got it all loaded. It was time to blast up river by braille. “Hang on to something so you don’t lose your teeth,” I told the guys. If we were to hit something, it would be violent. After an uneventful boat ride, we arrived at the beachhead. It was time to make landfall and begin the ascent out of the soup. 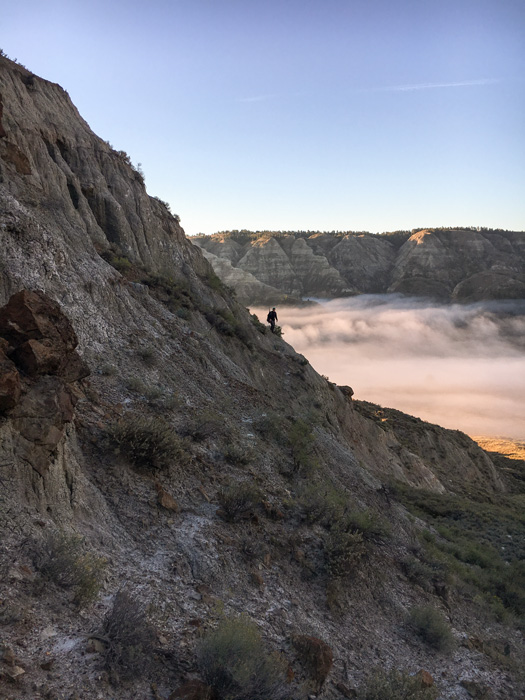 In the back of my mind, I was wondering if Bill had enough power in his legs to get up to where I wanted to glass. After about 45 minutes of hiking, we had split up; my brother, Jeff, and I went one way and my dad and Bill went another. Shortly after separating, I turned around and asked Jeff, “Do you think dad can make it up this way?” to which he just smiled and shook his head no. We were on a near vertical face with about a 60’ vertical drop right below us. 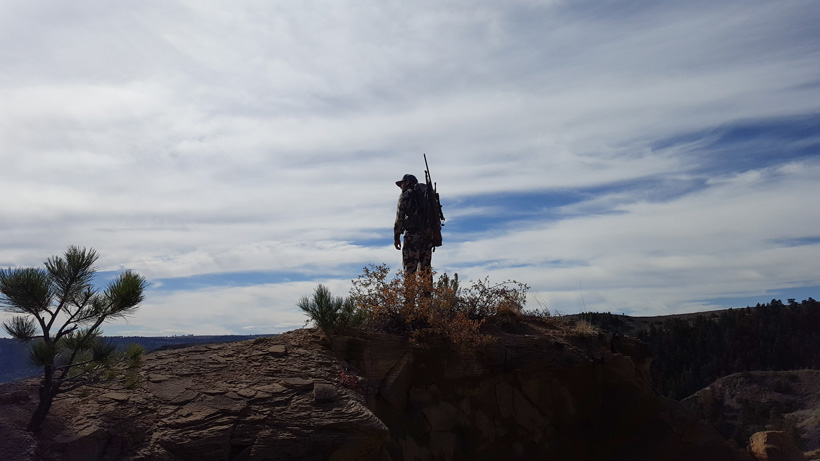 Once Jeff and I made it to the top of the ridge, we began to climb out of the fog. We spotted about 15 sheep on the opposite side of the river. That was out of our hunting district, but it’s always good to get the sheep count up. Once on the ridge we began walking out onto every finger, glassing into the hundreds of hiding spots for rams. There are countless places for sheep to hide. It only takes one step for the animals to disappear. 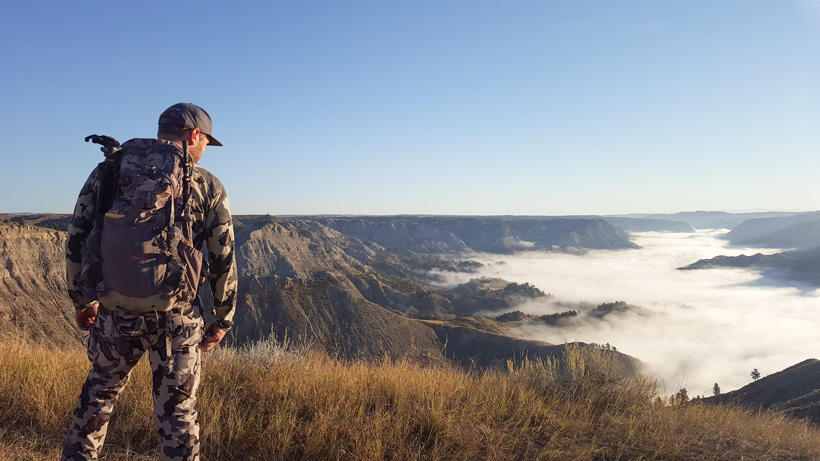 We began working our way up to the ridge. As we were almost to the end of the drainage we began talking about going back and meeting up with our dad. As most guys say to themselves, “Well, we’re already here. Let's hit that next ridge.” Then, once we got there it was, “Well, let's hit that next one.” Intuition tends to work out. We had almost reached where we were going to call it a day. Having not seen anything, Jeff and I were standing there talking and, since the day was warming up, I decided to take off my long johns. As I had my pants around my ankles, Jeff looked over my shoulder and 100 yards away there was a ram looking right at us.

I told Jeff to hold tight; that sheep wasn’t by himself. Once he makes his way over the ridge, I told Jeff we’d hustle over there and see who he is with. After a five minute stare down, he finally disappeared.

We trotted over to where he was, splitting up on the way over to cover his escape route. As it just so happened we spotted bighorns at 600 yards away and leaving the country. The ram we saw was with five other rams and one was worth a second look. I quickly got the spotting scope set up and began trying to get an idea of how big this ram was. I had a bittersweet feeling as I knew he was a good one, but these rams were looking like they were headed for the next county. We watched them for another 10 minutes until it looked like they were slowing down. They were on the opposite side of the drainage and a couple of the rams slowed down and started to feed. Knowing they were calming down, I finally had time to get a good look at the group. There were three nice rams in the group with one that was exceptional. 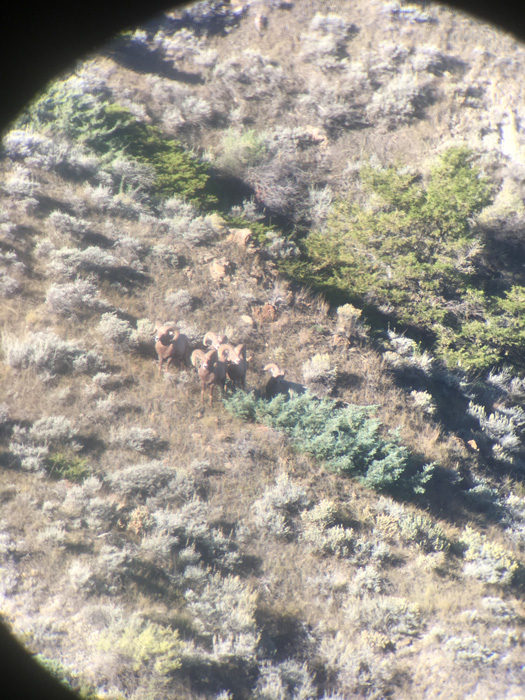 We watched them for about another 45 minutes and made the determination that they looked like they weren’t going anywhere. I decided to leave Jeff there to keep a bead on these things while I went back to get my dad. Where we split up from Bill was quite a ways away and at least an hour hike. But this sheep was a shooter so some extra miles were needed to be made. Once I got back to where I could see the river I was a little surprised to see Bill on top of the ridge. He had made it to the top, which shortened my hike by quite a bit.

Once I met up with him there was a short discussion about what we had seen. We made our way back up the ridge, trying to stay out of sight of the rams. Once we returned, the rams happened to be in the same spot as when I left.

Bill took a quick look through the spotting scope and realized it was a good sheep and quite a bit better than a few of the rams that we had already passed on—all of which were already book rams. Because we were well out of rifle range, we made a plan to get up the ridge to where we thought we could tap the trigger.

We worked up our way on the back side of the ridge to stay out of sight, periodically checking on the rams to see if they were holding position. Everything was looking good and it seemed like things were going to come together. This is when Bill busted out the Charlie Russell quote.

As we dropped down into the draw to get within range I wanted to do one final check to make sure the rams were still in the same location. Well, as things go, they were nowhere to be seen. Just then Jeff spotted one of the smaller rams going into a draw. We only saw him for two seconds, I did a quick scan and couldn’t spot another ram. It looked as if as the smaller ram was bringing up the rear, which told me the other sheep should be coming out of the top. I told Bill, “Get ready. Something is going to happen and it’s going to happen fast.”

Just as I said that a ram popped out the top and headed out. In another 25 yards, he would have been gone for good. The first ram began to trot and within seconds he was going to disappear. Bill was on the gun, but now the hard part was going to be determining which ram was which within a few critical seconds. We weren’t going to have the luxury to look at all of the rams at once. We had to decide which one was the one we wanted as they came out. The leaders in the herd would be gone by the time we had the opportunity to look at all of them. Yet, it was crucial to pull the trigger on the right sheep since this tag wasn’t exactly easy to come by.

All of this happened within a few short seconds. I quickly scanned the two rams I could see, then made the call that the second sheep was the one to aim for. After I said, “Shoot the second one,” I gave a whistle across the canyon and got the ram to put the brakes on for a second. Pow!

The ram dropped in his tracks at over 450 yards. We were all pretty excited since it seemed surreal that everything just happened as it did. As with experience, Bill didn’t take his eyes off the ram. The ram was back on his feet and Bill made one final shot and I was able to watch the vapor trail and the hit through the spotting scope. Now the question became, did we shoot the right ram. The guys had me second guessing myself, but I was damn sure it was him. We began making our way over there, but it wasn’t so easy. We were cliffed out. It took about 45 minutes to get over to the ram. 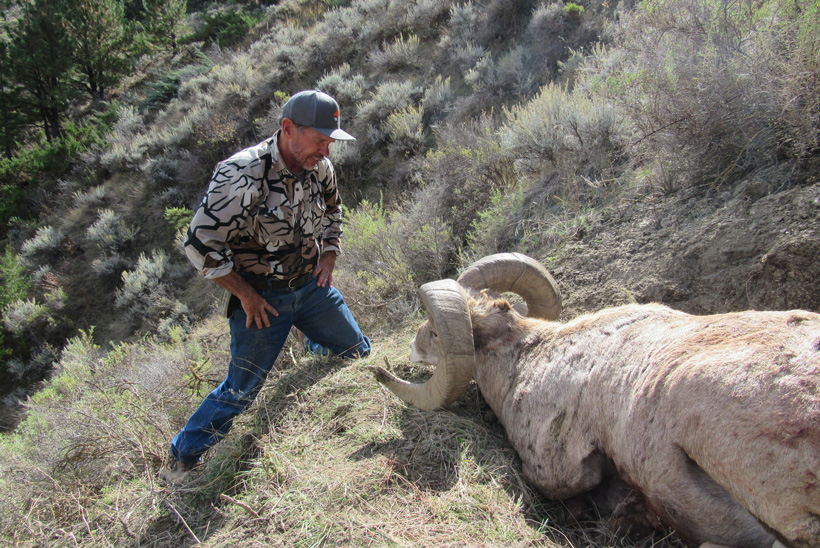 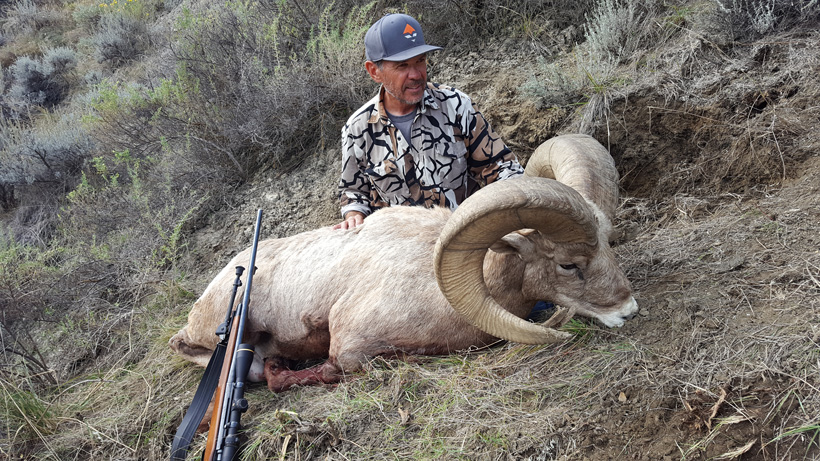 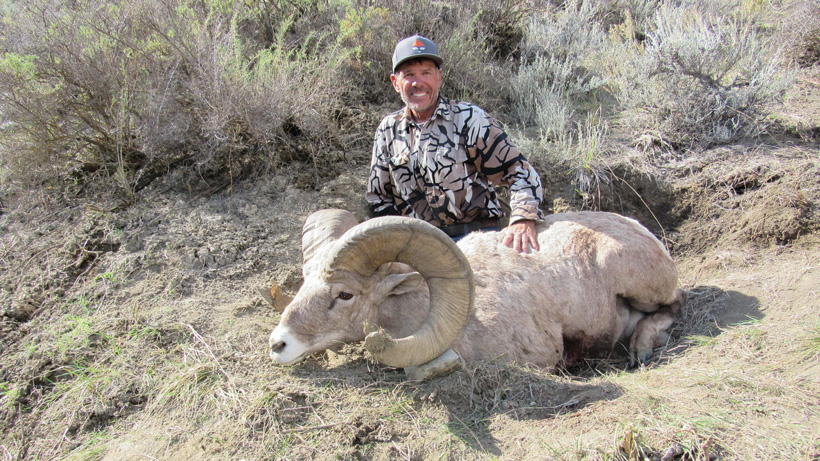 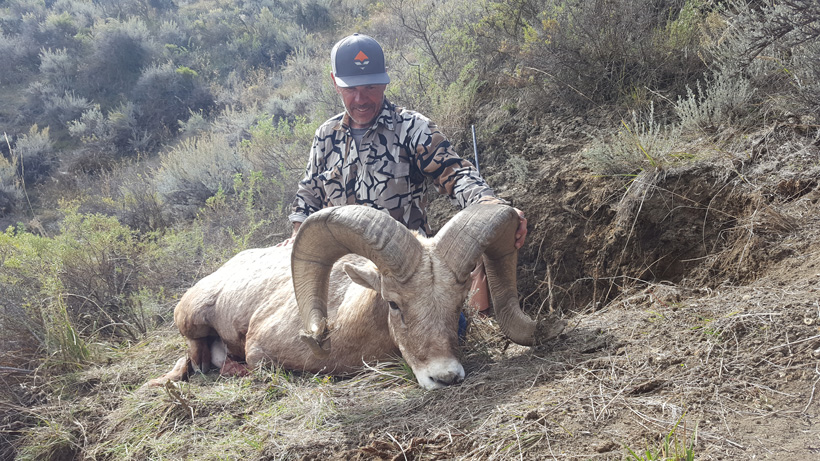 Then, suddenly, Jeff and I were now looking at this beautiful animal up close. It was indeed the ram we were after. The ram ended up scoring just over 191” after the official 60 day drying time. Bill couldn’t be happier with his trophy. 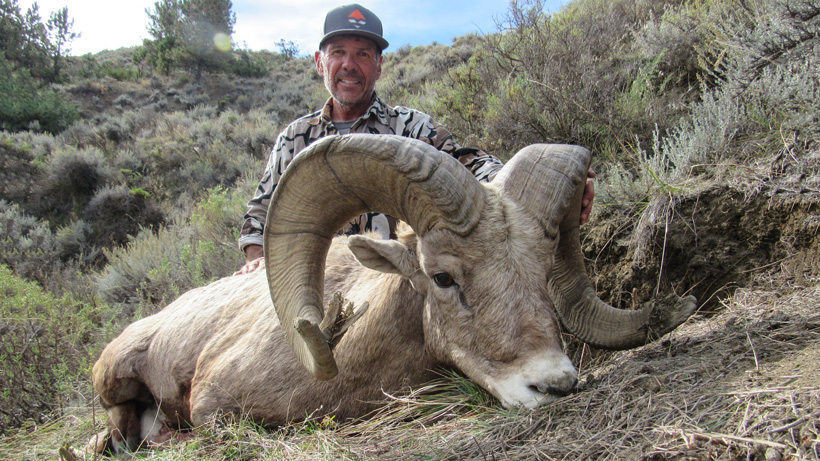 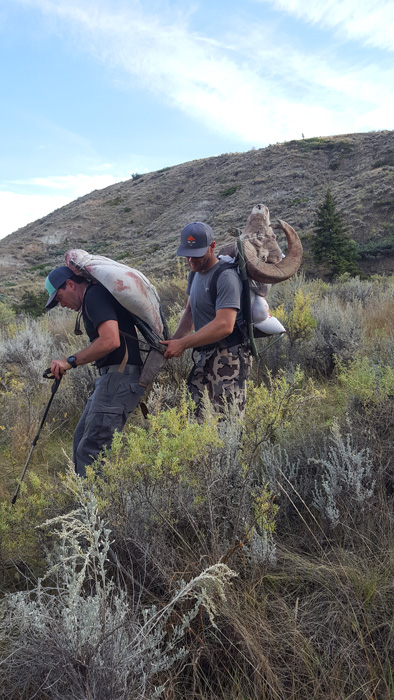