This year I was lucky enough to draw a Utah early rifle Limited Entry elk tag. Because I only had five points and the majority of those who draw this tag have anywhere from 13 to 17 bonus points, I didn't get my hopes up, but when I saw that my bank account had been hit for a Limited Entry elk tag I was ecstatic! 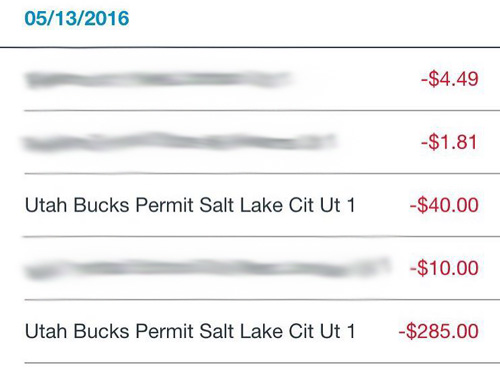 Being a hardcore archery hunter I expected this rifle hunt to be one of the easiest hunts of my life, but, boy, was I wrong! This hunt ended up being the hardest hunt I've ever been on; it was almost as if my luck had ran out.

The full moon kept the elk up all night and the hot weather had them quiet during the day. For the first couple of days, the weather was abnormally hot for September, which caused the elk to be quiet and unresponsive. Then, the weather quickly changed from abnormally hot to cold and wet! This made it very difficult for us to pattern the elk and get within shooting range.

On the morning of day three, we were able to make our way down the mountain and get on a smaller bull. We got this bull to respond to a couple of our cow calls and he quickly came running to less than 3’ from us. Once I passed him up, he slowly fed away.

You can check out a video clip from that close encounter below.

That evening, I was able to get a shot at a smaller 5x6 and shot just over his back at 420 yards. After missing that bull, my moral was at an all time low. Going into the third night we received flash flood warnings on our phones and were told that they were expecting snow at 8,000’. Fortunately, we were camped at about 9,200’, which meant that we were going to get a decent amount of snow that evening. 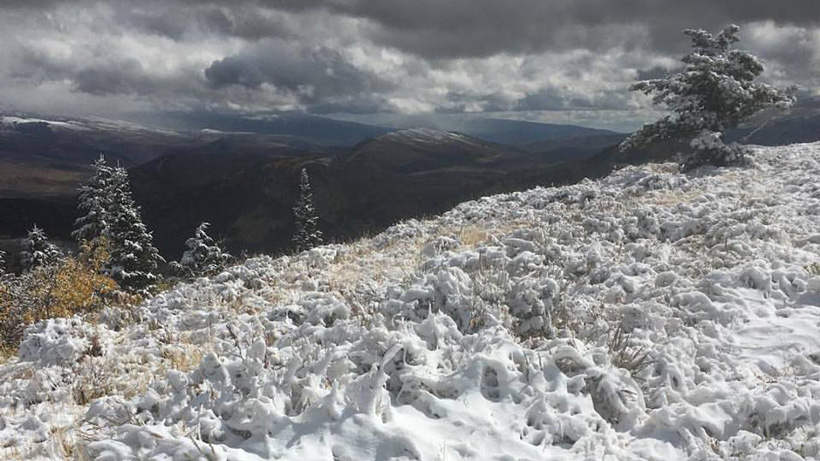 The next morning, we woke up to about 6” to 8” of snow and a thick blanket of fog, which made it nearly impossible to see. Finally, there was a break in the weather. We went to see if we could find anything moving around now that the storm seemed to stop, but, once again, came back empty-handed. Just before going to bed we received another flash flood warning, this time telling us we should expect another 6” to 10” of snow.

After four days of bad weather I was starting to accept the fact that I might be eating my tag. We woke up at 5 a.m. to a complete blizzard so we hit the snooze button and went back to bed, hoping the storm would clear up by daylight. Finally, around 8 a.m. the storm passed and the fog cleared.

We quickly gathered up our gear and my dad, his cousin, Matt, and I made our way down the canyon to one of our glassing spots. Right away I was able to spot two smaller bulls that were a couple canyons over. Matt decided that he would try to make a move on them. He made his way over toward them with hopes of getting a shot. Once Matt left, I spotted another bull bedded in a large sage flat three canyons over and about a mile away. I was so confident that this bull was a shooter that I didn't even glass him through the spotter. I dropped all of my nonessential gear with my dad and made my way down the canyon. About three minutes into my stalk, I realized that I left the rangefinder with my dad. I radioed him and asked him to meet me halfway up the canyon. Once I got down into the thick canyon floor, I tried radioing my dad to make sure the elk hadn't moved, but, because of the thick trees, I wasn't able to get ahold of him.

I was completely alone and was now without a rangefinder and had to find the animals by myself. I eventually made it over to the third canyon and still wasn't able to get ahold of my dad. Not knowing if the elk was north or south of me, I could see that my dad was glassing down the canyon so I headed down toward where he was looking.

With my frustration building, I was finally able to get my dad on the radio. I told him where I was and he was able to find me in the spotting scope. Once my dad spotted me in the scope I told him I went down the canyon because that's where I could see he was glassing, but he told me that the elk were still at the top of canyon. He’d spotted a small raghorn farther down the canyon, which was why he was looking that way. My dad told me to make my way back up the canyon along the treeline until I arrived at a big patch of red scrub oak. He said that the elk were still about 600 yards away bedded in the same area.

I made my way around the knob to the north side. With the wind in my face, I dropped my pack, setup my shooting sticks, and slowly started moving toward the top of the opening. Now, out of the trees and without cover, I slowly hiked to where I last remembered seeing the bull. Staying low and trying to stay below the sagebrush, I looked up and spotted about 15 cow elk bedded along the tree line. I quickly set my shooting sticks up and began looking for the bull as I glassed the tree line. Trying to find the bull, I heard raking off to my left and spotted him less than 50 yards away. 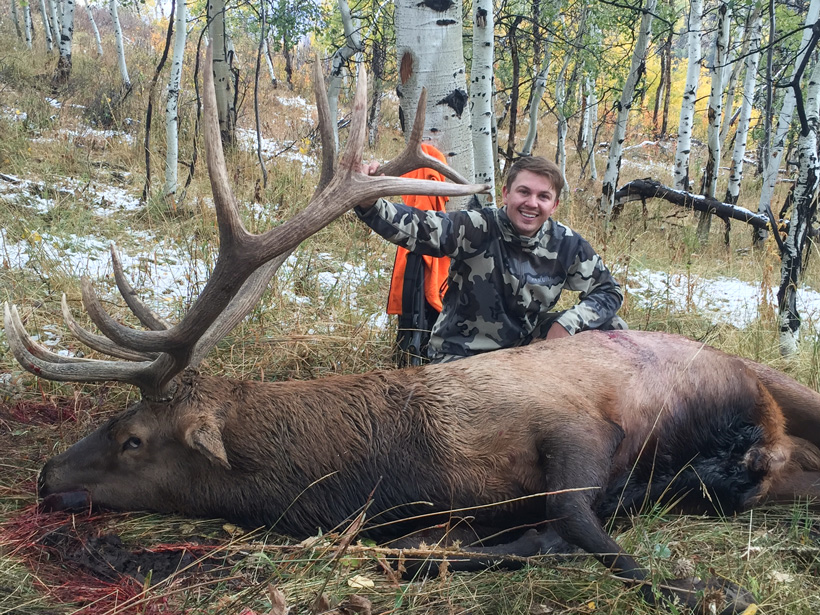 I ducked down below the sagebrush and slowly made my way to him. Finally, I arrived where I could see his whole body in order to make an ethical shot. I set the gun on the shooting sticks, took the safety off and pulled the trigger. Instantly, the bull arched his back before running down the canyon. He fell down and tried to get back up and I knew the farther this elk ran the farther I'd have to pack him out. I chambered another round and shot at him as he was getting up. The bull then ran another 10’ before finally falling down and expired. Once the elk expired, I radioed my dad. 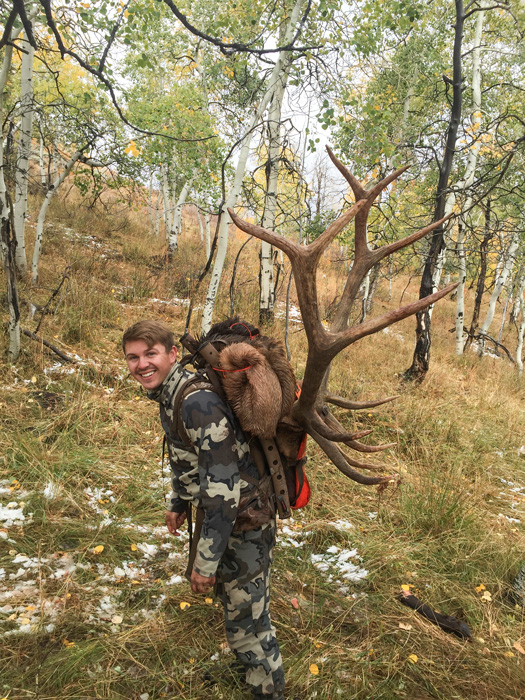 Like typical Utah, the weather changed in the blink of an eye and the snow quickly started to melt. I was very lucky to get this bull because later that night we received an even larger snow storm that caused us to leave our trucks at camp. 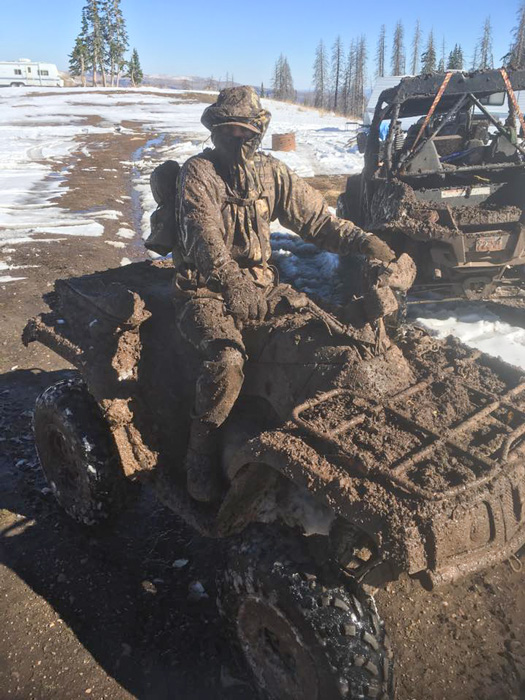 We ended up riding the four wheelers to the closest town and then got a ride back to the trucks. Special thanks to my dad, Jeff Mecham, Chris Perkins, Tyson Mackay, Brett Bowels, Porter Mecham, Matt Thomas, and Jim Thomas. 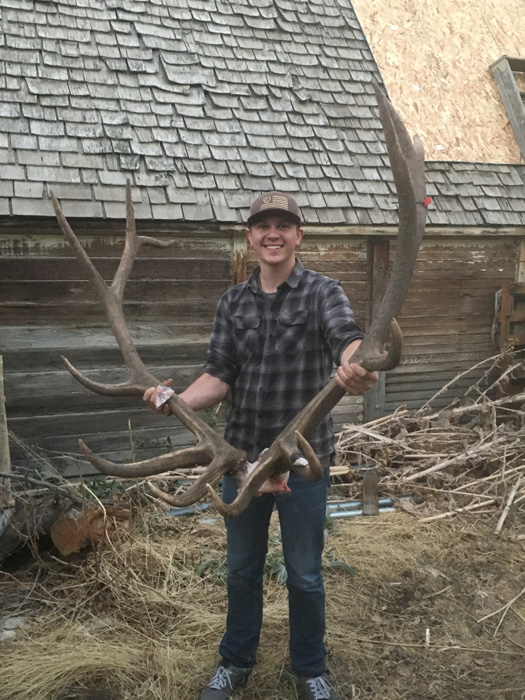