An unforgettable bowhunt with my grandpa

Growing up, I was introduced to hunting at a very young age. Each night, I sat for hours beside my grandpa in his old chair while he read the hunting ethics handbook out loud. This was the start of my hunting heritage and I passed the Oregon Hunter Safety test at only eight years old.

Every fall everyone in my hometown of Baker City, Oregon eagerly anticipates the hunting season. As the years progressed, hunting was constantly on my mind and I couldn’t help but think of ways to extend my season.

Four years ago, a family friend introduced me to archery hunting. I will never forget that first elk we called into range! It was a cow and I didn’t even have a bow, but I was shaking like I had a tag in my pocket. After that season following my family friend around in the woods on their archery hunts, I was hooked. I immediately went into the bow shop and purchased a bow for the next archery season. Being the first in my family to archery hunt, it was a completely new sport. During the off season I shot my bow regularly in hopes to let an arrow fly during my first bow season. Well, as any archer would know, that didn’t happen. It took me three years to be able to harvest a deer with my bow. Yet, when I let that arrow fly and saw my deer fall, the emotions that came upon me were like something I have never felt, which only fueled my passion more for archery hunting. 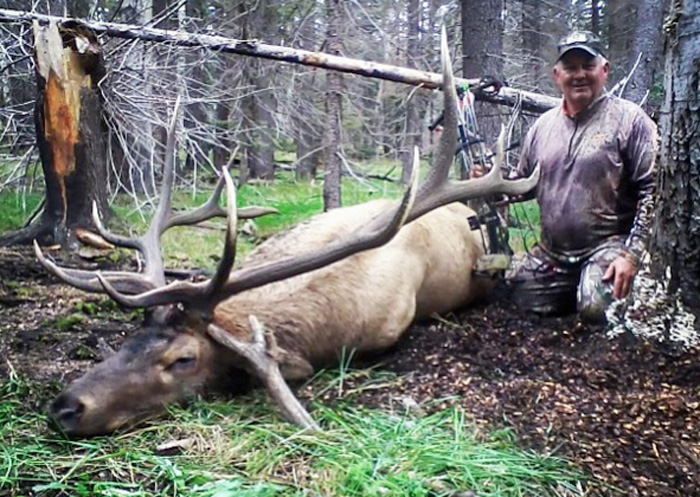 My 2015 archery season was by far my most memorable; it was truly a hunt that I will never forget. My grandpa, Joe Spellman, is the reason I have grown up craving hunting. We have hunted all over the world together, from Africa to Arizona to Montana. But, since I’ve switched to archery equipment, he hasn’t been able to go on those long back country adventures because of his age. 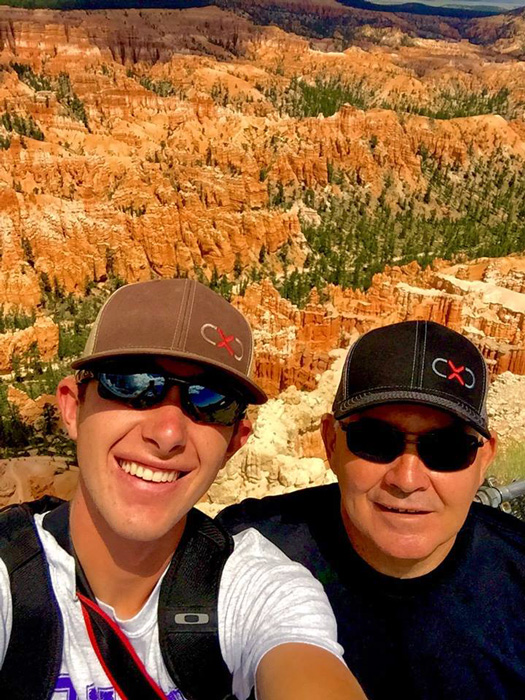 Austin with his grandpa.

As my senior year of high school came to a close, my grandparents gave me a card. Inside that card was a trip to Arizona to archery hunt Coues deer with my grandpa! I was speechless. My grandma, Rhonda Spellman, said something to me that day that I took to heart, “Your grandpa only has so many years left to hunt, make those memories while you can.” 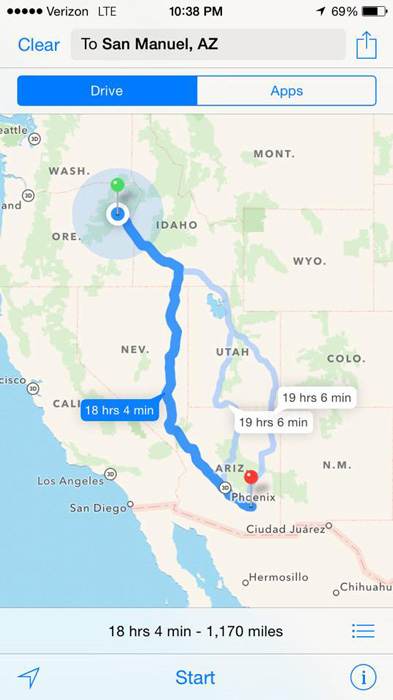 That summer was full of hard work. Shooting daily, scouting for deer season in Oregon, and also working at our family business. My grandpa was doing the same, shooting daily, planning the trip to Arizona, and, most importantly, actively getting prepared for the trip by losing 40 lbs! With the truck packed and gear ready to go we headed to San Manuel, Arizona for our Coues deer hunt. 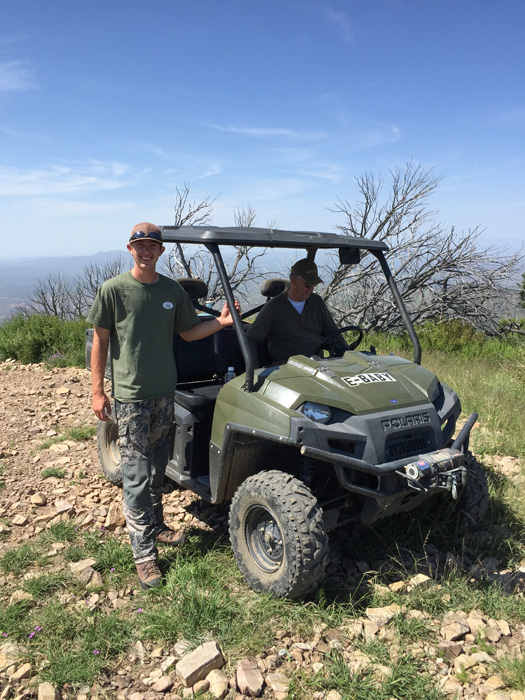 The Arizona trip didn’t go as planned. It was a ten day hunt, sitting in ground blinds over a water source. The weather for the next ten days did not look promising. The rainfall in Arizona that accumulated in the month of August was 9.44 inches, which was highly unusual for that time of year. 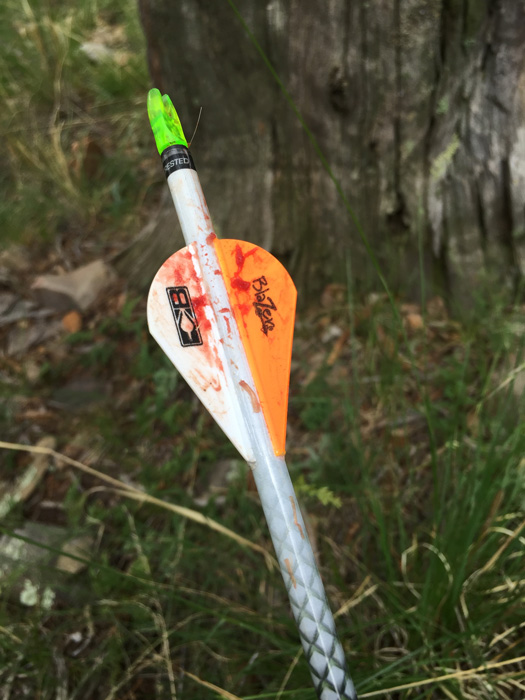 On opening morning, a monster Coues deer stepped out of the thick green brush. I drew back and settled my pin right on the front shoulder of this buck. He started to walk to my right so I decided to make a small noise to try and stop him. He stopped, but was very alert. As I squeezed the trigger I launched an arrow right through the top of his back. I was devastated knowing that it wasn’t a fatal shot. Archery can bring the highest of highs and the lowest of lows in a matter of seconds. I let about thirty minutes go by and went to retrieve my arrow, finding nothing but hair and muscle tissue.

Over the next nine days, the rain really started to fall. On day nine, with both tags unpunched, we decided to pack up due to the extended forecast for the next couple of days. Oregon archery season was just two days away so we decided to make the 23-hour drive straight back home to Oregon in hopes of arrowing an archery mule deer. This hunt left a bitter taste in my mouth, but I am planning on returning in the late summer of 2016 in pursuit of one of these elusive Coues deer. 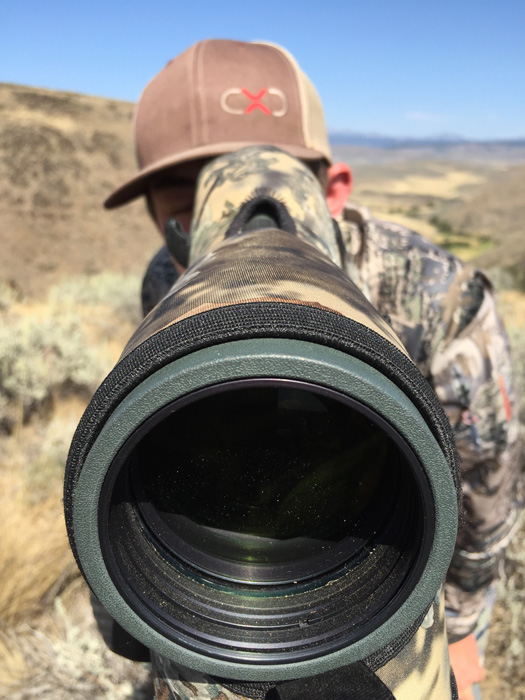 Rolling into Oregon with just one day before the archery opener, I had a limited amount of time to regroup, make sure my bow was still tuned, and scout for desert mule deer. My goal was to find a group of mule deer that wouldn’t be a long hike from the truck so I could take my grandpa. After scouting and finding a couple of nice bucks before the opening day we decided to focus our attention on a specific canyon. A couple of days passed, with some more missed opportunities. It was like my bad luck followed me to Oregon. 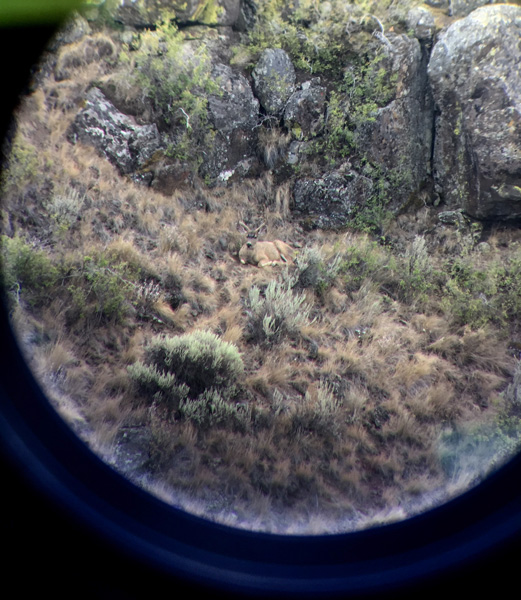 On Sept. 1, 2015, my grandpa and I hiked back into the sage brush canyon. It wasn’t long and I glassed up a nice velvet mule deer buck across the opposite side. As the buck bedded down for the afternoon right underneath a 15’ rock cliff, my grandpa and I made a game plan for the stalk. I set him up with my Phone Skope adapter connected to my Swarovski spotting scope. The buck was about 900 yards across the canyon so my grandpa was going to stay and watch it unfold while videoing the entire stalk.

I made a big loop around to the backside of the hill where the buck was bedded and stripped off my boots and pack. I had 200 yards to close while making the stalk in my socks, trying not to step on cactus. The entire stalk took roughly three hours in 90 degree heat, but I found myself just 22 yards away from the bedded buck. As I peeked over the rock ledge, the buck moved further into the rock cliff so all I could see was his backend. 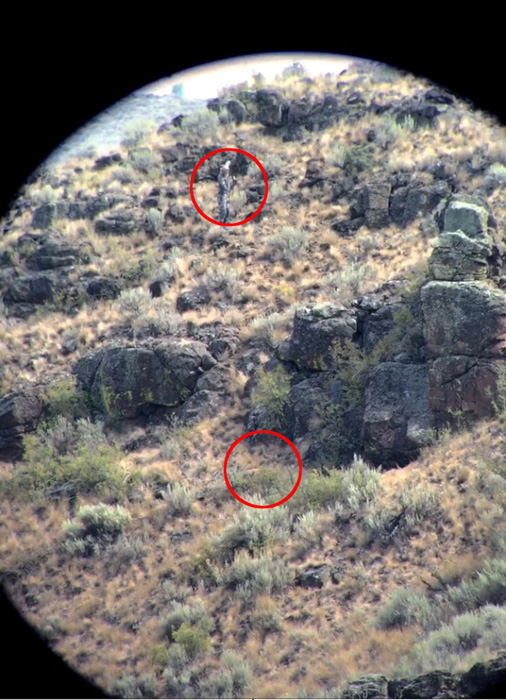 I knew I had to get closer so I moved up about 10 more yards. This time, I knew the buck would be in position for a shot. I drew back and peeked over, putting my entire sight right between his shoulder blades and letting the arrow fly! 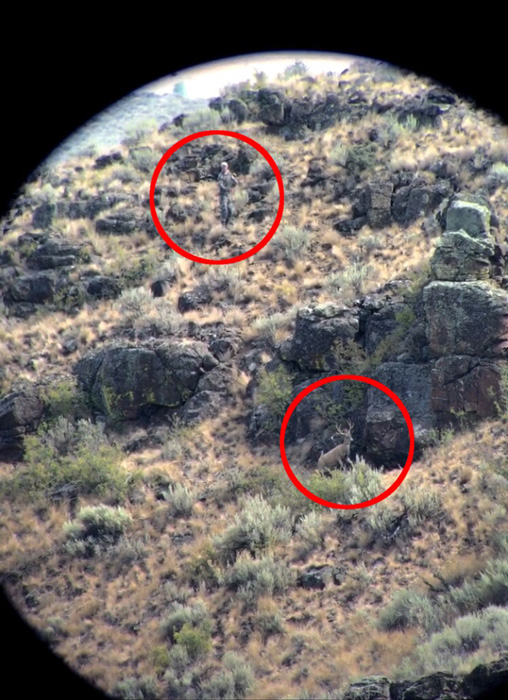 It hit perfectly as the buck jumped out of his bed, ran about 100 yards down the canyon and piled up. 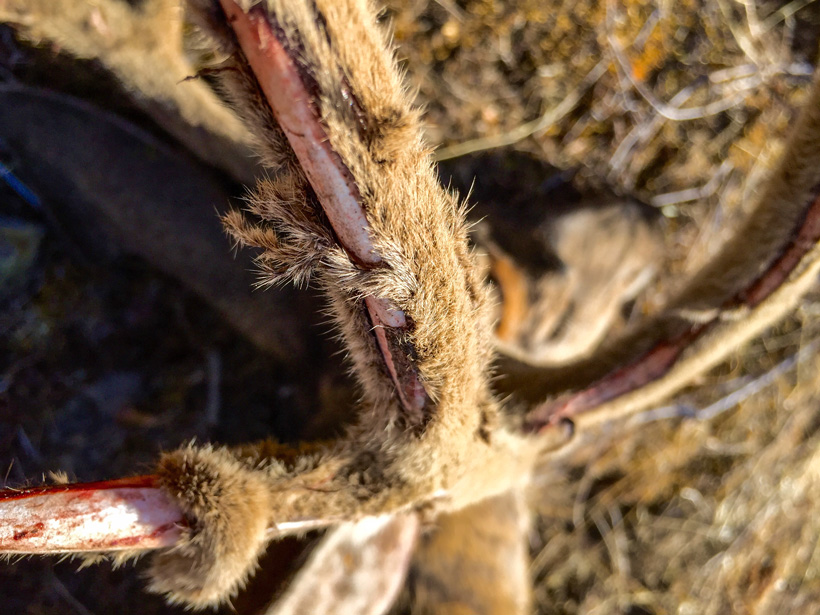 I threw my hands up in celebration, grabbed my binos and looked over across the canyon to see my grandpa just as excited as I was. Then, I sat down and the emotions rushed over me. 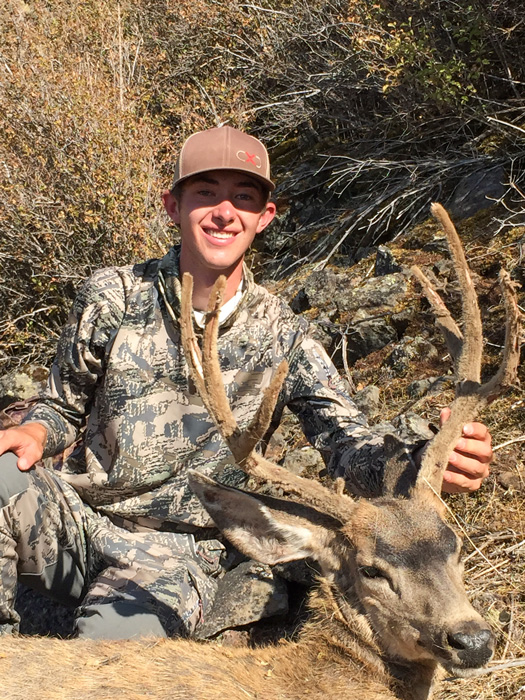 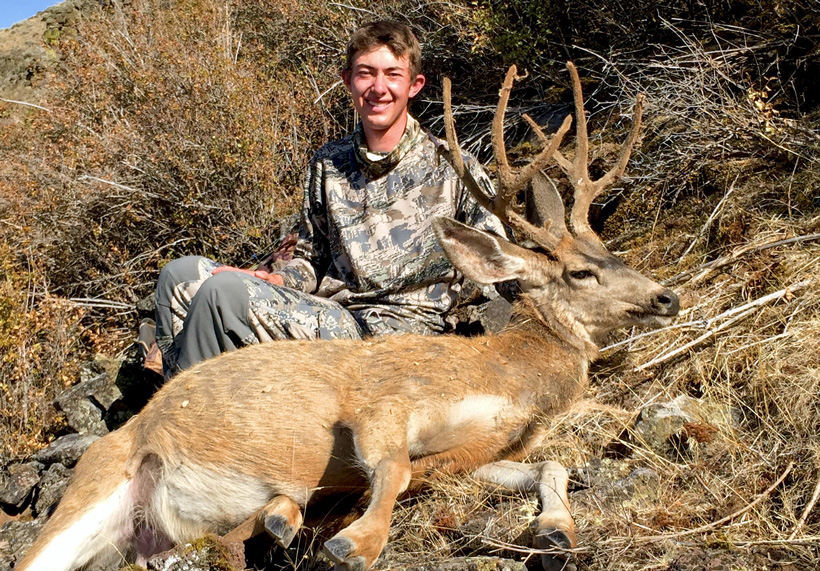 After the rollercoaster of emotions I endured during this archery season and to be able to harvest a buck with my grandpa watching the entire stalk go down was very special to me. 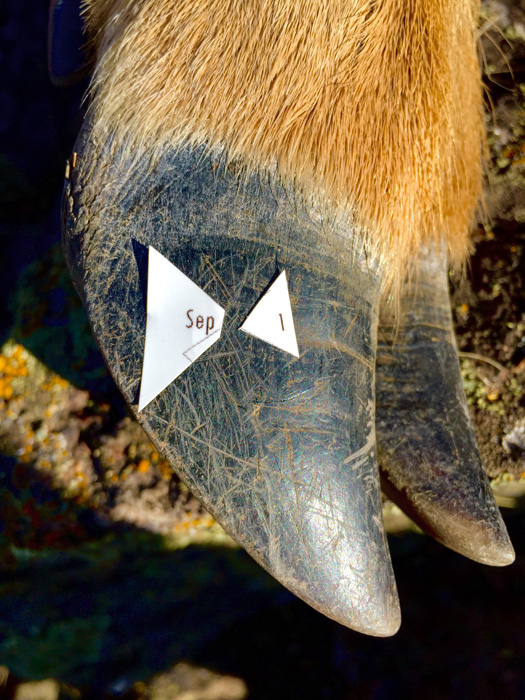 To me, this buck wasn’t about the trophy, it was about the hunt and the great memories made that day. 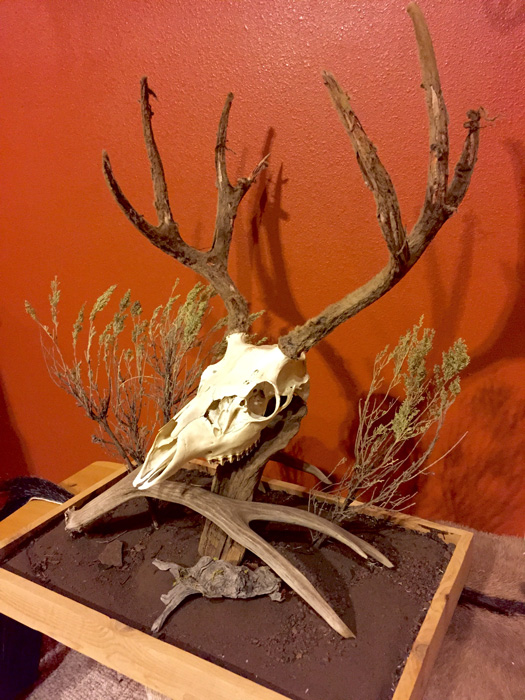 Meeting back up with my grandpa, I sprinted down the hillside to give him a huge hug in celebration. He said to me, “I am very proud of your persistence, this hunt will be something I’ll never forget.”