An elk hunting season to remember 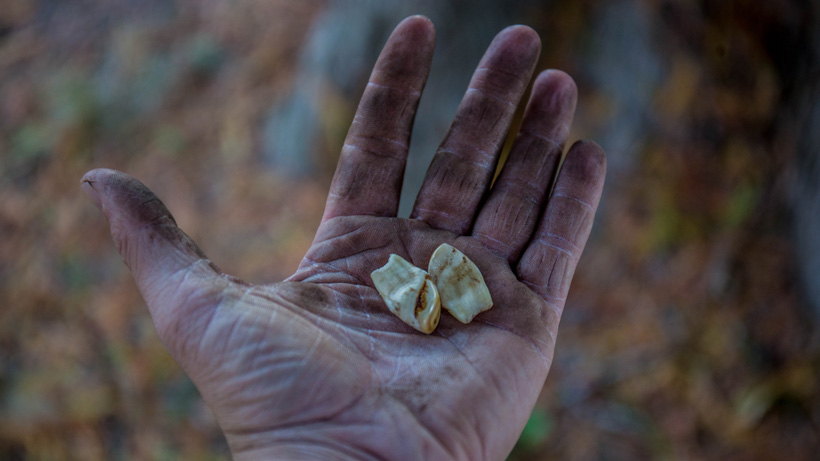 Selected! I was excited when I saw that word next to my 2016 Washington Quality Elk Special Draw application and that's where this story starts. 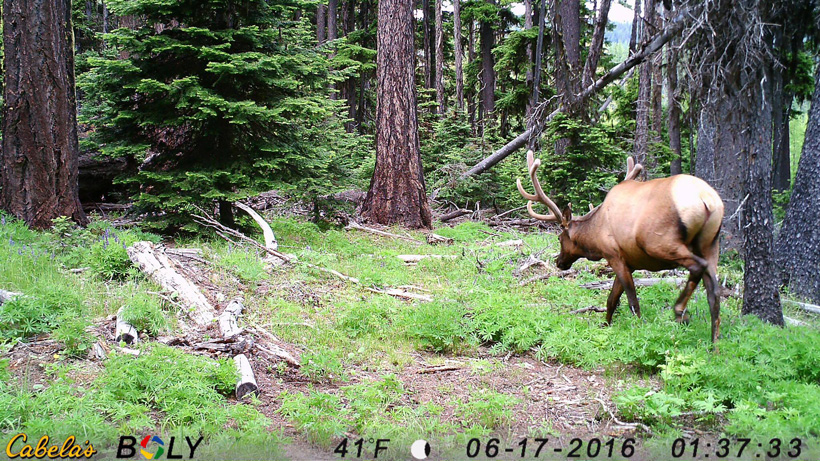 As we crested the pass and entered the east side of the mountain range the excitement really hit. I was finally in the elk woods knowing I’d be hunting screaming bull elk for the first time and it was an amazing feeling. 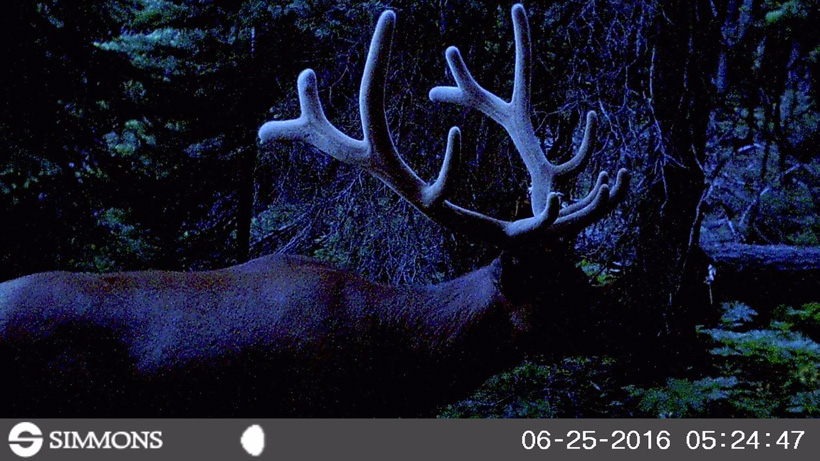 The first camera check yielded a handful of cows and one really nice bull.

This time I was out scouting with a new friend of mine, Zack. Zack and I had talked about checking some different areas out just to be more familiar with our unit. On Friday night, we checked the first set of cameras before dark and became really excited: 300 pictures of elk with several bulls and tons of cows and calves! Now we were wondering if we even needed to scout other areas out, but decided to anyway. 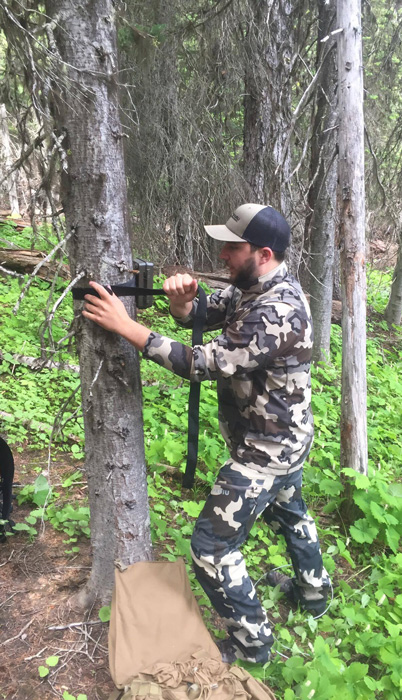 We turned up some amazing country and hung some cameras in that area, but the one camera I was most excited about was set up in this giant old heavily used wallow in the middle of a huge meadow.

Zack and I headed to check cameras and scout for a final time before the season opened. On Friday afternoon, we headed into the first set of cameras and as we checked them we realize that it was a bust—2,500 pictures of shadows and trees—and the other two cameras turned out to be duds, too, with nothing on them but a few photos of cows and a handful of deer. With spirits low we headed to our plan B area. 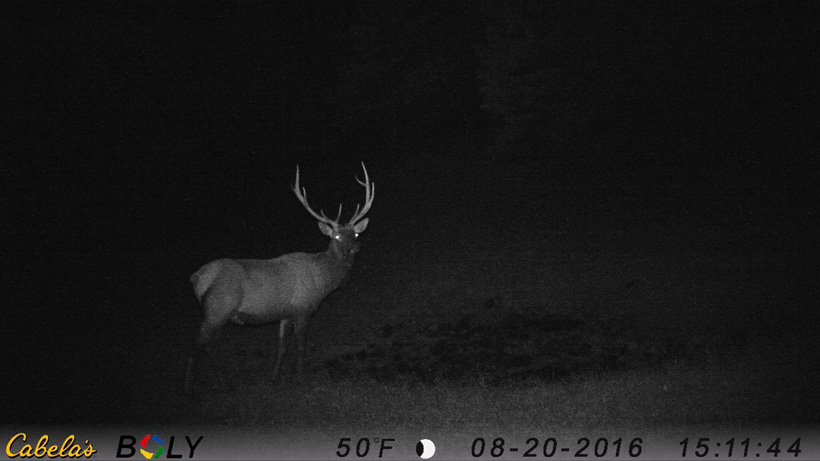 We parked at the plan B trailhead on Friday evening and slept in the truck. On Saturday morning, we hiked in and set up camp. Then, we continued hiking toward the cameras and were extremely pleased with the results of the first one, but nothing was going to prepare us for the wallow camera’s results. 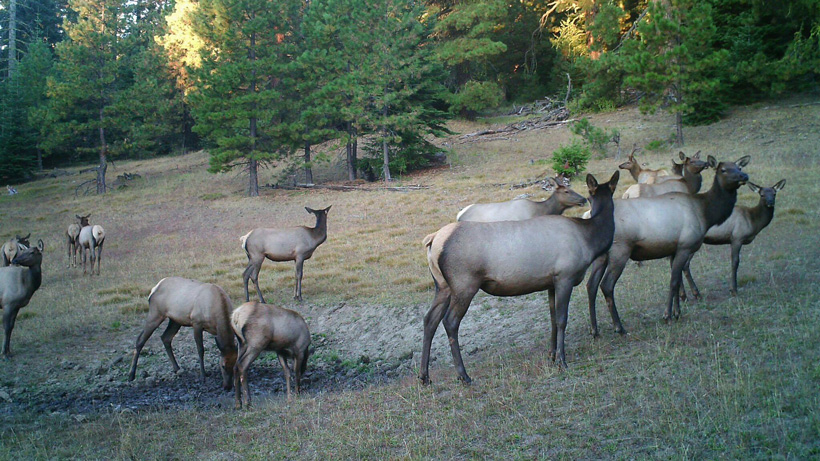 As we checked the wallow camera, we became overwhelmed with 500 photos of elk—yet not a single photo of a bull. I was nervous but Zack assured me with the rut closing in the bulls would be showing up very soon. After we checked the camera, Zack and I started digging up our dried up wallow to see if we could hit water and make it nice and muddy—a trick we learned from our buddy, Paul Servey... thanks again Pauly! 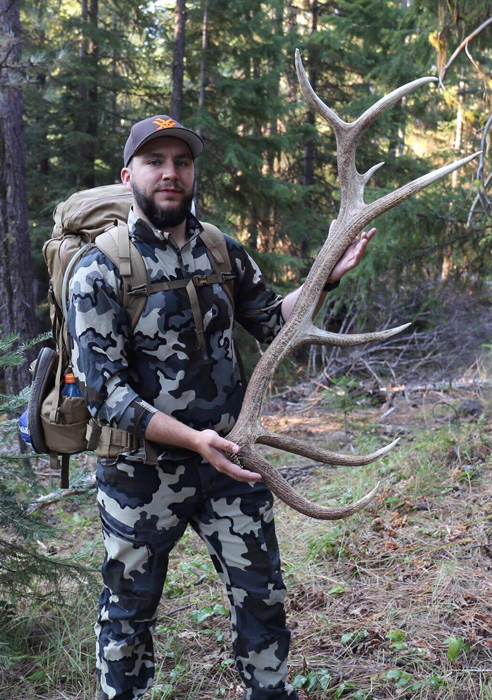 We left the elk woods with a few sheds and a final plan for the season; we were going to hit the wallow area on opening morning.

September 9 — The day before opener

My two hunting partners and I met at the trailhead at 5 p.m. and started the three hour hike into our camp. We were about 10 minutes from our campsite when Bobby spotted an elk and it was looking right at us. Our first elk of the trip and it's a bull—talk about exciting! That night we set up camp and fell asleep to that bull barking and bugling occasionally. To say it was hard to sleep was an understatement. 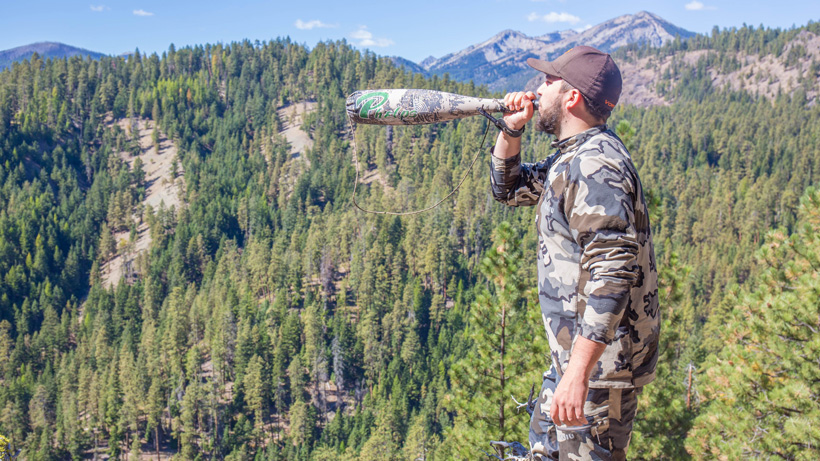 We’re up and on a bugle at first light, but, with our lack of experience, the bull never came into the open. With a meadow dividing us, he stayed on his side and we stayed on ours, trying to pull him into the meadow. He soon took off toward the mountain behind him without letting us even see him. Our plan was to hunt our way toward the wallow and check the camera to see what had been in the area over the past three weeks. But before we arrived, we decided to bugle from a ridge that Zack and I had located during one of our scouting trips. I let out a bugle and almost immediately got a response.

We discussed a game plan and began to act on it, circling around to get the wind in our faces. I let out another bugle and received another reply in the same spot. We continued to head silently in that direction. Me and my cameraman set up on a game trail with Zack, our caller, behind us about 60 yards. Zack let out a cow call and the bull fired back. Zack hammered him again with a bugle and that was enough to get the bull to come. I could hear twigs snapping as he walked toward us with Zack cow calling behind me. Then, the bull stepped into view. I drew my bow at 17 yards perfectly broadside. The bull stopped and I released my arrow. Only four hours into opening morning and I had just arrowed my first ever bull elk. It wasn't until I checked the footage and saw my arrow that I realized it was not a good shot. Due to all of the emotion and excitement and, most definitely, bull fever I made a bad shot and hit high and far back. As a hunter it's probably the worst feeling in the world and an extremely tough pill to swallow. Knowing it was a bad shot we all backed out and headed to camp.

With very little sleep we headed back in to try and find my bull the following morning. All day we crawled around looking for blood. Our small trail of flagging tape didn’t have us feeling too good about the chances of recovery, but we continued the search in the bee infested deadfall and, after being stung numerous times, I asked myself, “When do I continue to hunt?” and Zack replied, “Whenever you feel it’s right.” We left with a sick feeling, but we were confident that the bull was still alive based on the footage. 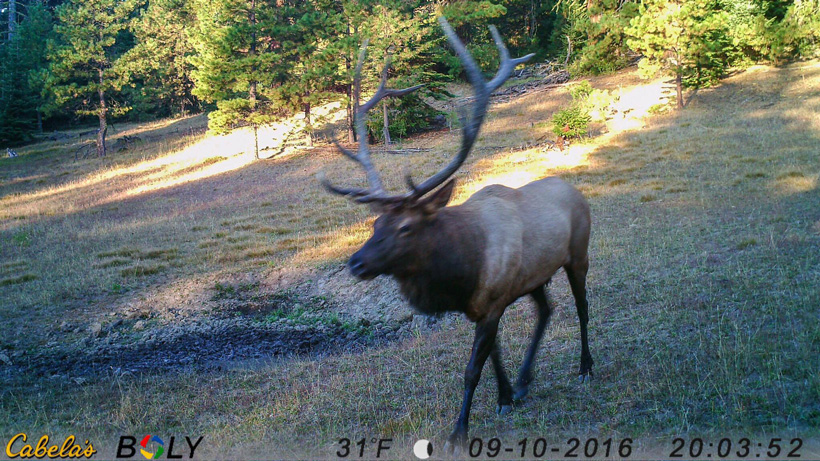 Trail camera photo of a large bull from earlier in the season.

We were back at it and this morning was turning out to be a good one. Before daylight, we have three bulls bugling in the drainage below us. Once daylight finally arrived, we dropped into the drainage with the wind in our favor. After eight minutes of playing with a bull, trying to get him to come in, he decided that he wasn't interested. We moved in another 100 yards or so and found the bull, but he has us busted—45 yards straight down hill from us. He took off into the brush as we stood there, whispering, trying to figure out our next move. Then, we heard a twig snap right beneath us. Zack and I both have our bows in hand, waiting to see what it is. As it steps into our view, we see that it's a spike. 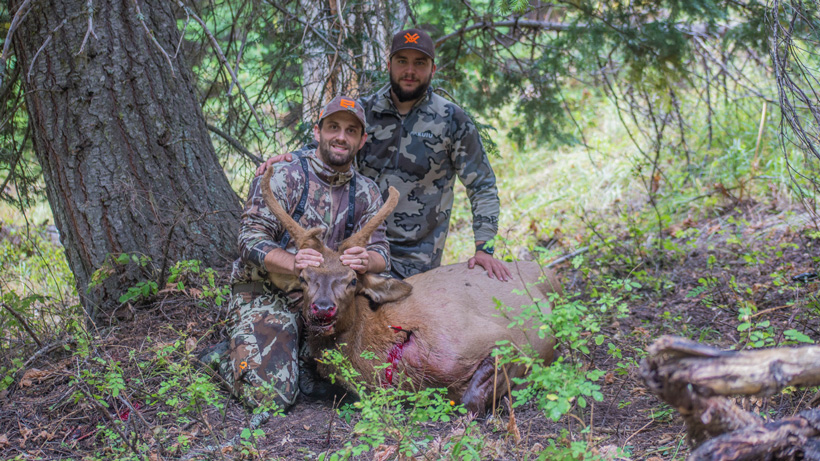 I set down my bow and grabbed the camera. The spike didn’t even know we were there. He stepped into Zack’s shooting lane and...schwack! Only 45 yards away and Zack has his first ever elk! 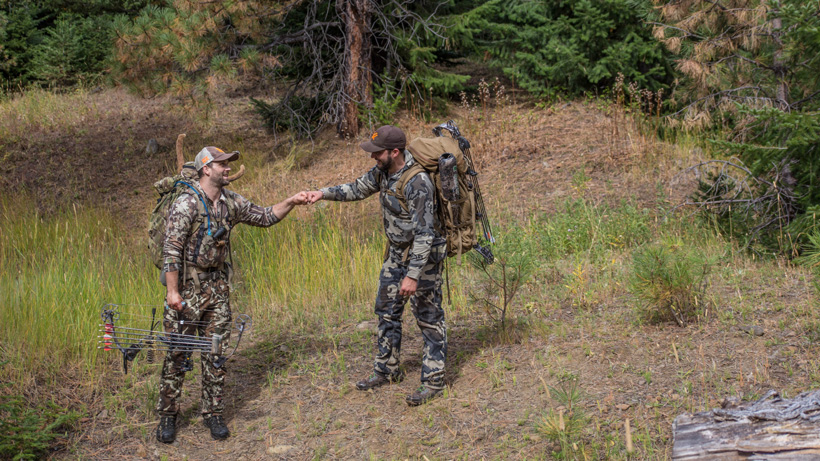 Later that afternoon, we packed Zack’s spike back to camp. We ate a big brunch before heading back out. There’s a big storm rolling in so we decided to head toward the wallow meadow and the ridge bordering the meadow. We reached the ridge top and let out a bugle with no reply. So we continued to work our way down the ridge and bugled a few more times with the same results. After the fourth attempt, I suggested that maybe my bugle wasn't reaching down into the drainage since the wind was ripping in our face. I motioned that maybe we should drop into the drainage 500 yards or so and try again. We headed deep into the drainage and into really thick elk sign before I let out a bugle. Still, no reply.

The storm started to pick up. At 4:30 p.m., Zack suggested that we start hunting our way back toward camp. I agreed but, first, I wanted to bugle one more time. The last bugle finally got a response and it’s close! We ran toward the bugling bull and, as we got about 150 yards from where we think he is, I let out a cow mew. The bull was lazy with his response, but now we have him pinpointed! I dropped down into the blown down tree infested drainage to the bottom where the bull was hanging out. Zack was behind me about 50 yards with the camera and began to cow call. My other buddy, Junior, was with us, too, and, as the bull bugles, fired right back with a challenge call! The bull was coming in and he was hot! I could see legs coming through the brush but no view at his headgear yet.

By 5:48 p.m., I have a lane ranged at 19 yards. I nocked an arrow and got ready to draw as I peeked, kneeling down and moving my head slowly to try to see how big the bull was. Finally, I got a glimpse. He had a kicker on his right side, which made him a seven on his right side. I like character! I drew my bow and readied myself as he stepped into my lane. Then, I froze. I couldn't make any sound; my mouth was dry as a bone and he blew right through my first lane! Now what? 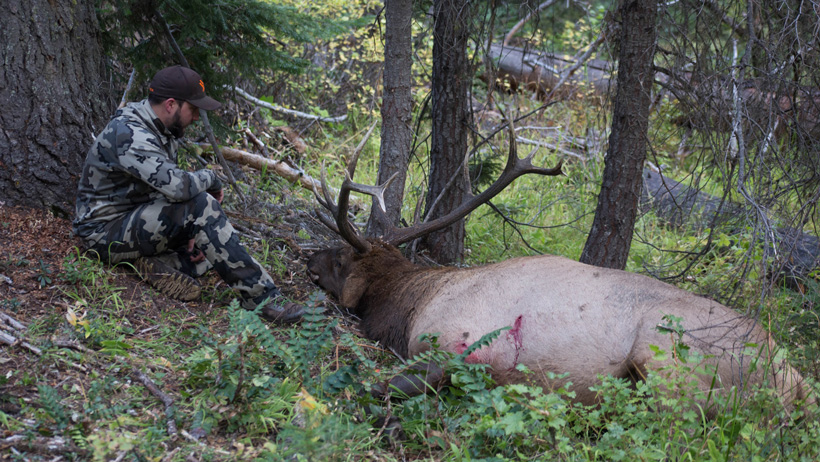 I calmed my nerves and spotted another lane even closer to me. Just as he reached it I made some freakish monster noise and he stopped, looking right at me! I let the arrow go with my pin glued to his vitals at 12 yards. He took off running uphill right toward Zack. He stopped and, as he stared at Zack and his cow mews, I nocked another arrow and drew my bow. I settled my 40 yard pin right behind the quartering away shoulder and let it go. 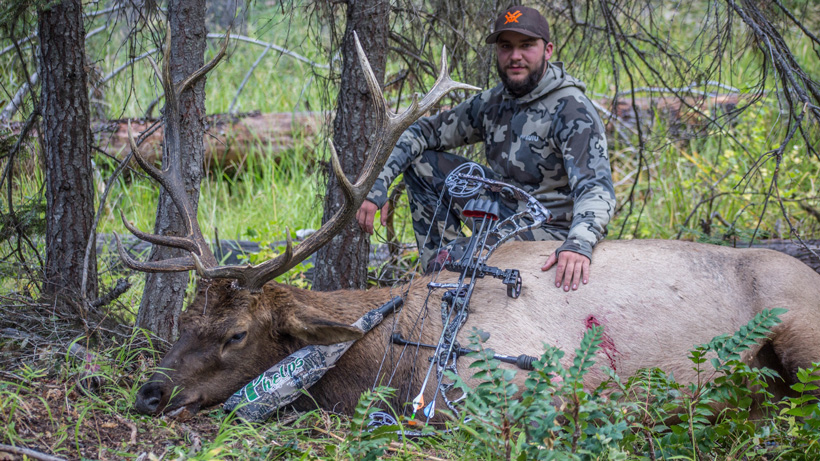 I scrambled to get my eyes on the bull as he stepped into a tiny break in the trees and his legs gave out on him. He went down 10’ from my second shot. It was an emotional 10 minutes filled with hugs and high fives and a even a few tears. All the ups and downs of this season made this journey what it was and I wouldn't change a second of my elk hunt. 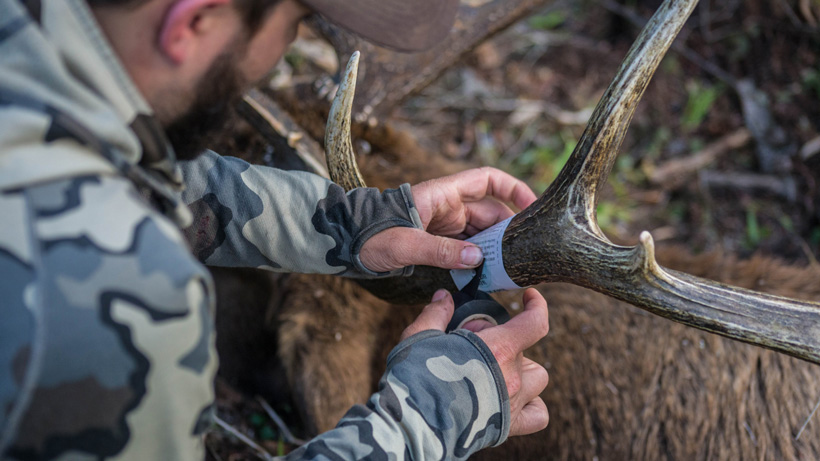 The bull ended up being a 7x7 with matching kickers on each side. While he may not be the king of the mountain, he's my bull and I couldn't be more proud to harvest that bull with my buddies that night. 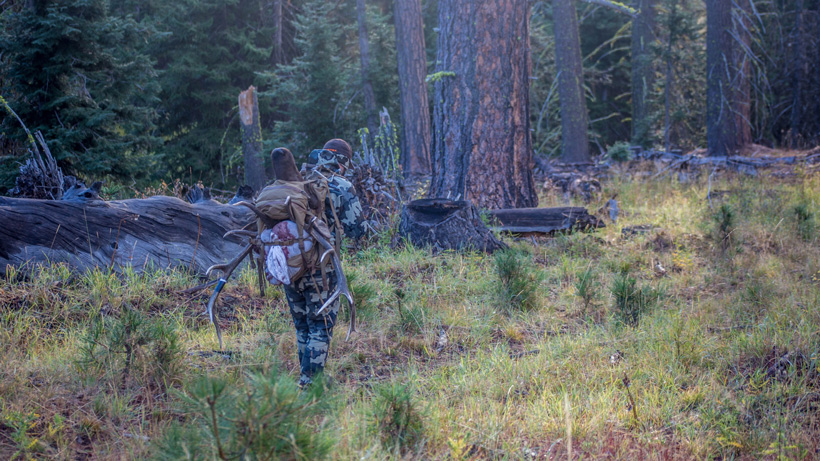 The packout was an experience I will never forget.