An adventure north of the Arctic Circle for caribou

About 15 years ago, I was given the opportunity to go on a caribou hunt to Alaska. I was ecstatic! My dad was one of the lucky few that won the hunt at a local dinner banquet. As the day of the hunt drew near, anticipation grew stronger. We checked off our gear lists and prepared for the hunt of a lifetime — we were ready to go! Unfortunately, luck was not on our side. The day before we were to fly out, my dad received a shocking phone call. The outfitter had to cancel the trip. We were devastated! After all of the years that we’d spent dreaming about hunting in Alaska, the “last frontier,” our big plans were swept away right before our eyes.

As time — and many hunting trips — have passed, the could-have-been caribou hunt in Alaska has always been on our minds. While we thought that the opportunity had passed us by all those years ago, we recently discovered that luck was again on our side.

Recently, a good friend had moved to Fairbanks, Alaska, to start his career. I was envious of his move to the great state of Alaska and immediately started researching how I could make it up there for the much-anticipated caribou hunt that had been taken away from us. After a lot of research and plenty of phone calls, I contacted a bush pilot and we were on our way! 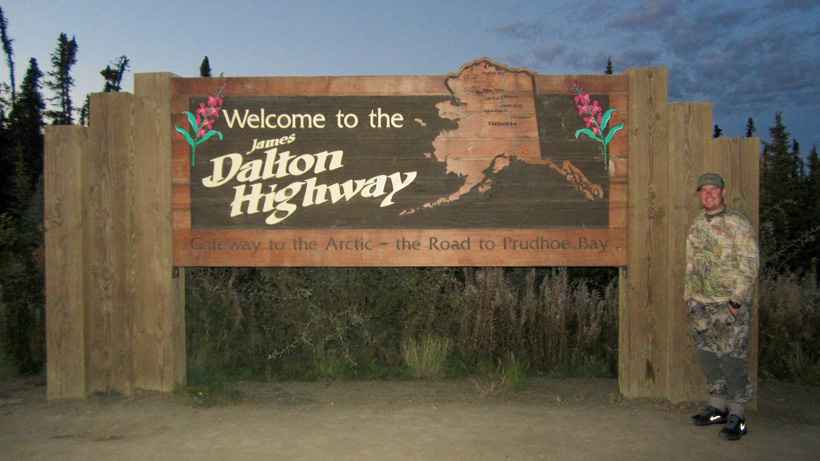 Before we knew it, we were flying out of Salt Lake City toward Fairbanks, Alaska! Once we arrived, we had a nine hour drive north, traveling along the Dalton Highway or, as the locals call it, the “Haul Road.” 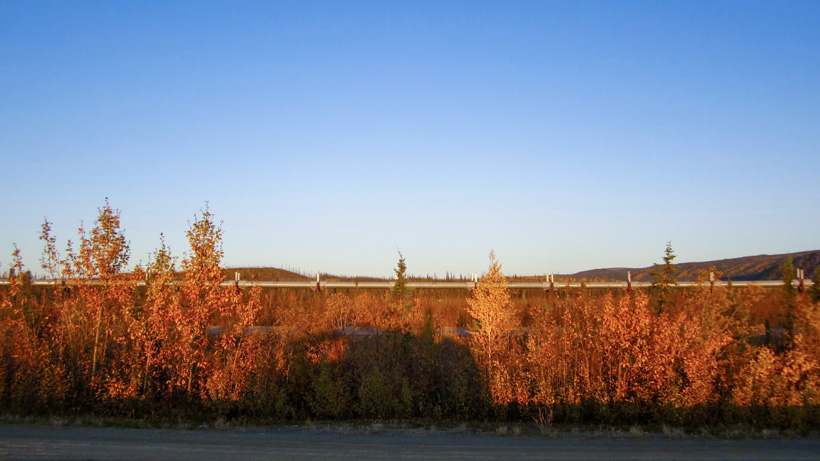 In this area of Alaska, one thing you will always see is the Valdez Pipeline. In our travels, this was a constant sight to the north. 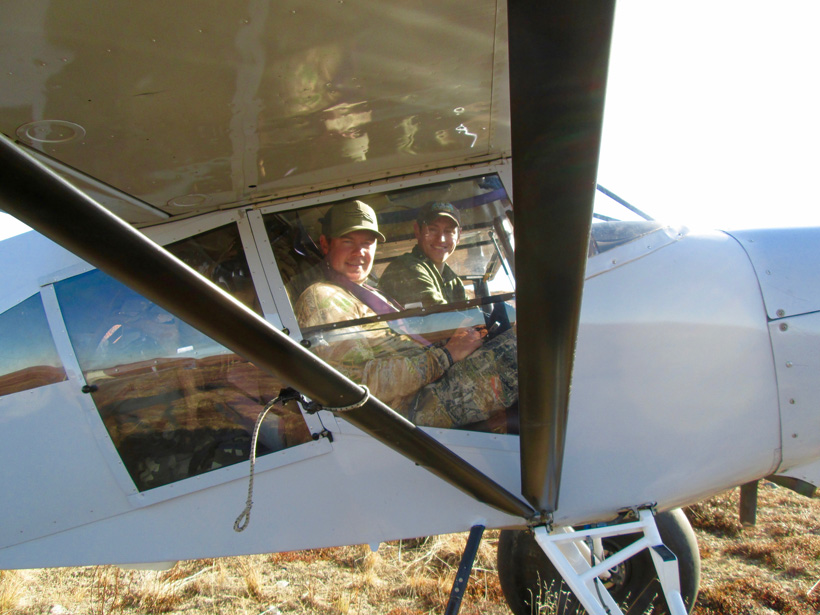 Once we arrived at the local airstrip, we met our drop camp pilots, loaded our gear, and prepared for an early morning departure. Due to restricted weight limits, each person was allowed only 70 lbs. of gear for the entire hunting trip. This was quite a challenge as there were four men in our group and 70 lbs. had to include food, shelter, and clothing/gear for an entire week. Fortunately, we were able to pass weight checks. It was truly a minimalist adventure we were about to embark on. 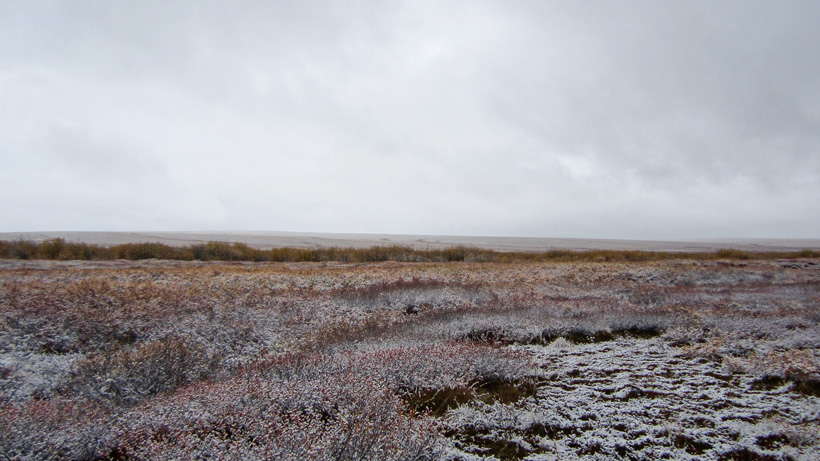 After getting camp set up, we waited until the following day to hunt, hoping for good weather conditions. Unfortunately, we woke up to snow and rainy weather. 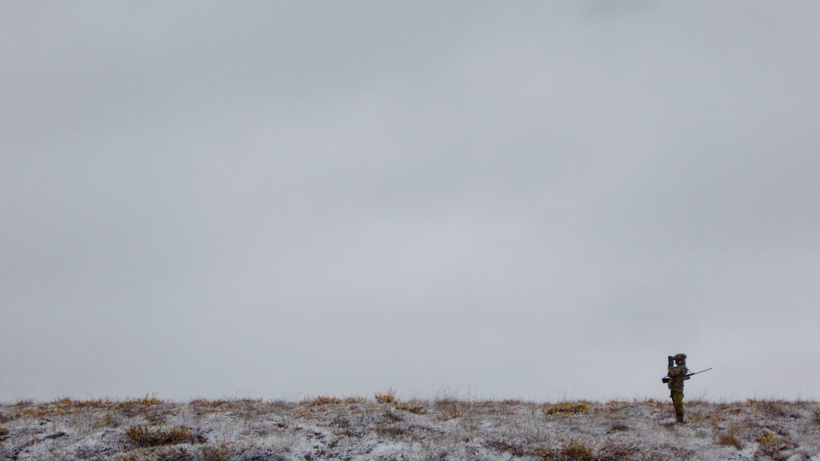 Although it was wet, foggy and cold during the first few days of the hunt, we did our very best to glass the tundra in search of mature bulls. 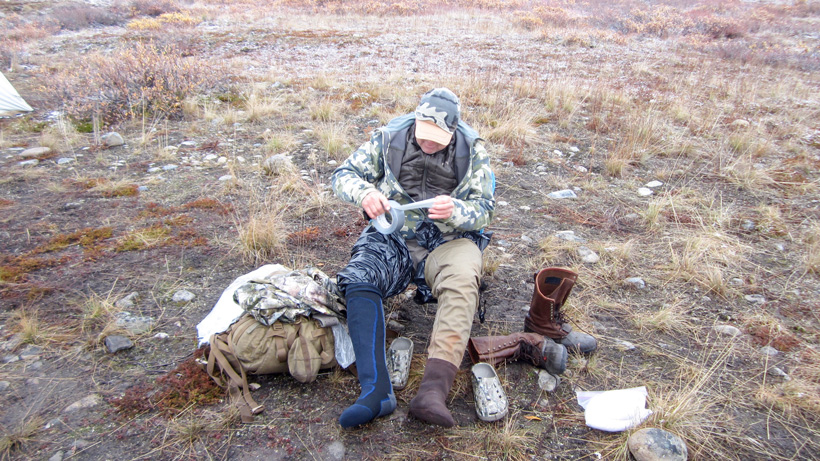 When I say it was wet, I mean sopping wet. I lucked out and came prepared with waders and lace-up fishing boots. My dad did not have these items and had to try a method called “garbage bags!” 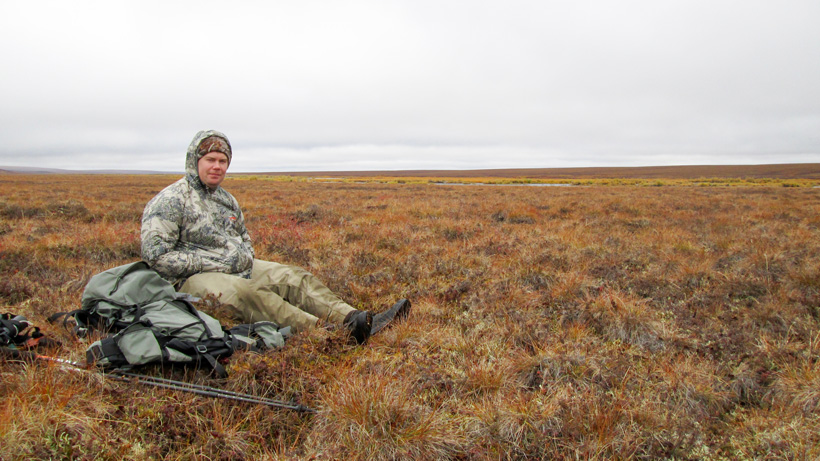 After spending the first few days in cold and wet conditions, we decided to start getting serious about shooting bulls. Each person in the hunting party had two caribou tags so we knew that we better get after it if we were going to return home with caribou. 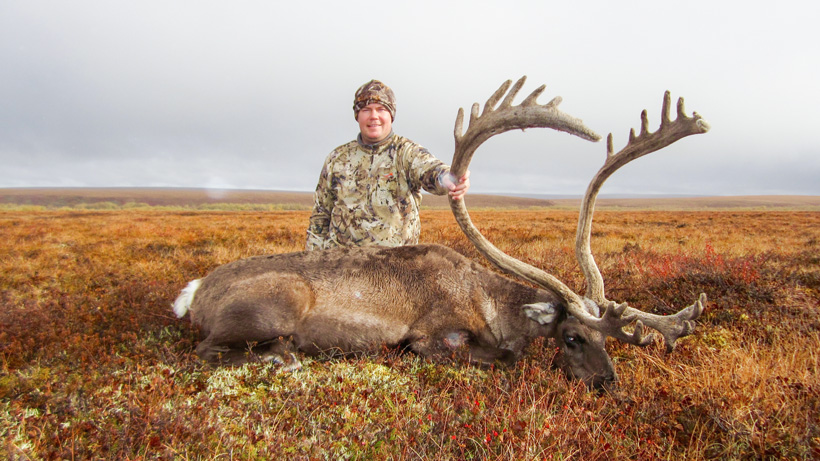 On the third day of the hunt, I took this nice bull. We didn’t notice that he didn’t have front shovels on either side until we approached him. 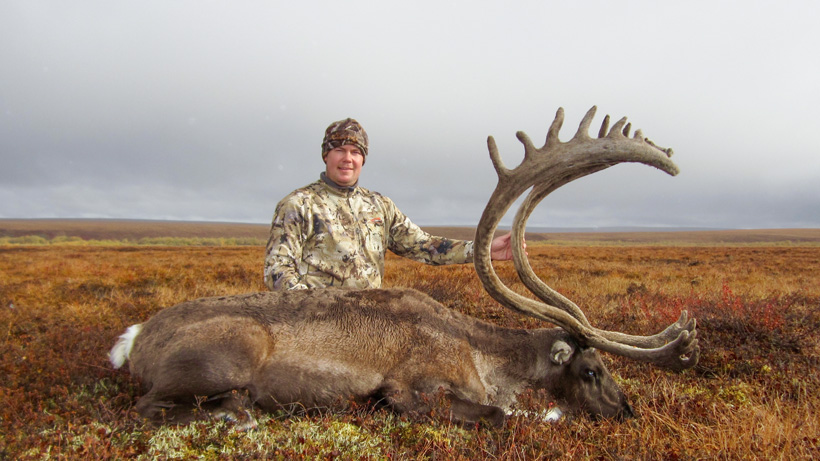 Another look at my caribou bull that I have been dreaming about hunting for years. 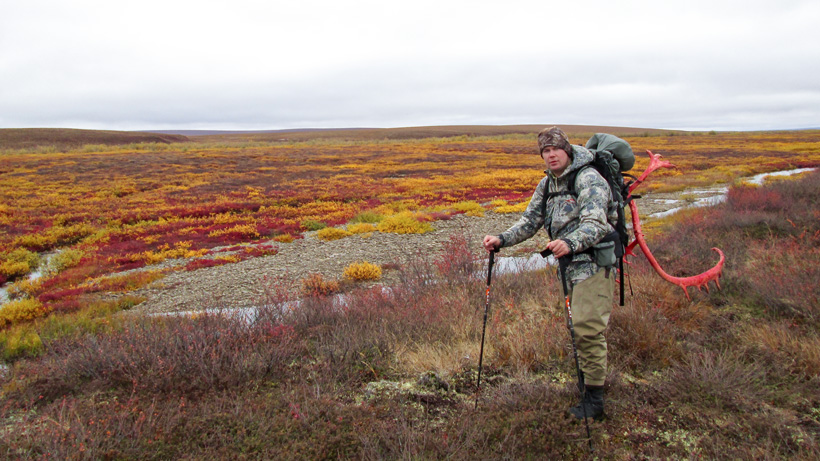 I shot my bull on Aug. 29 and this is when they were just starting to rub their antlers. Unfortunately, there was no way to save the velvet on my bull so I peeled it off. 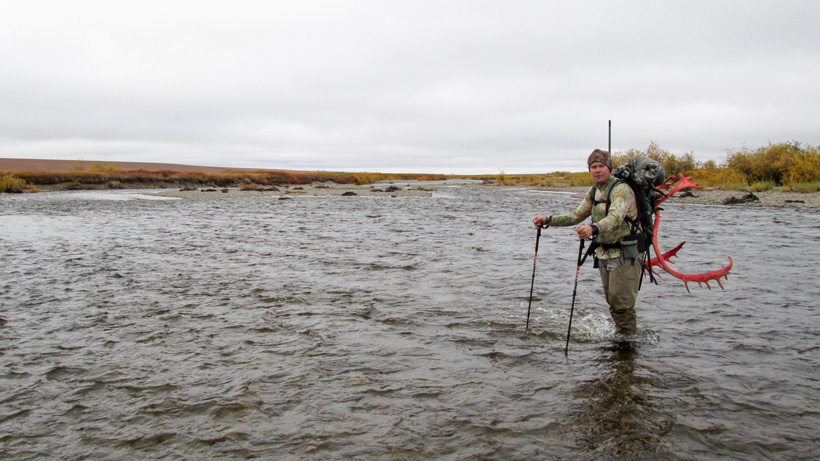 Trekking back to camp with a full load, across the tundra and rivers, was a memorable (and exhausting!) experience. 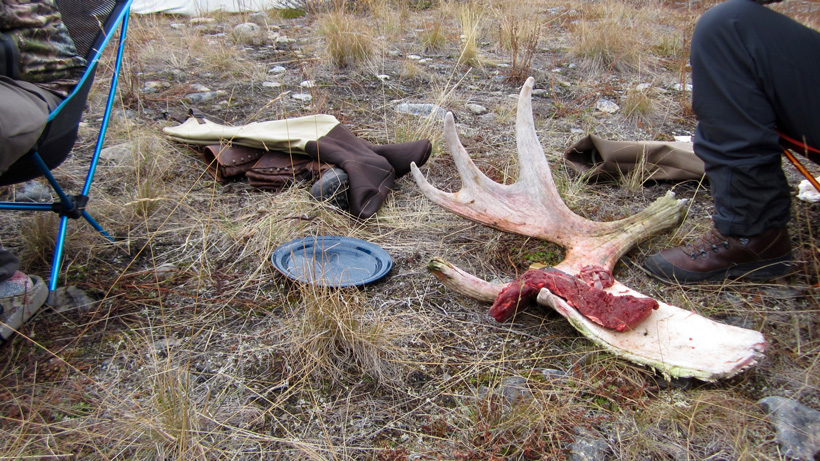 Once we returned to camp, it was time for dinner. We fried up the tenderloins and the backstraps. It was delicious! 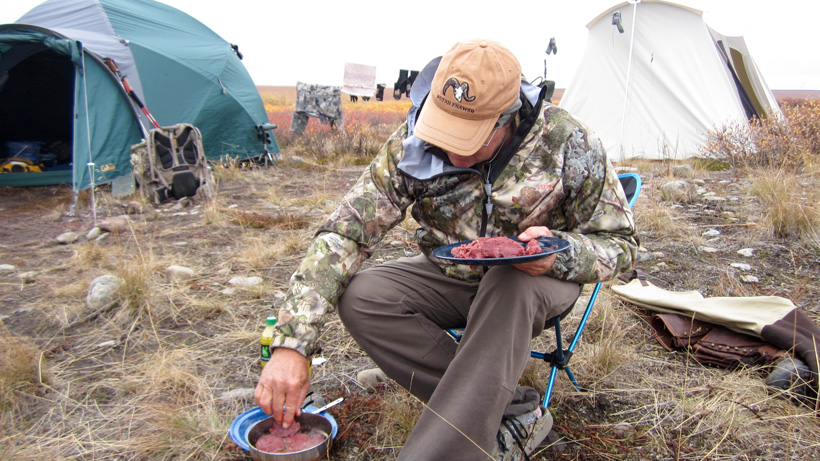 Anytime I go hunting with my dad, I always let him cook the meat. This was cooked to perfection. 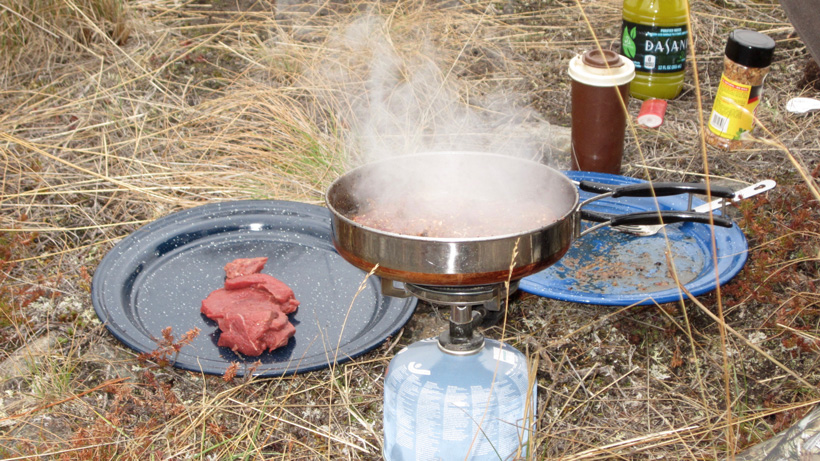 Our cooking set up at camp. 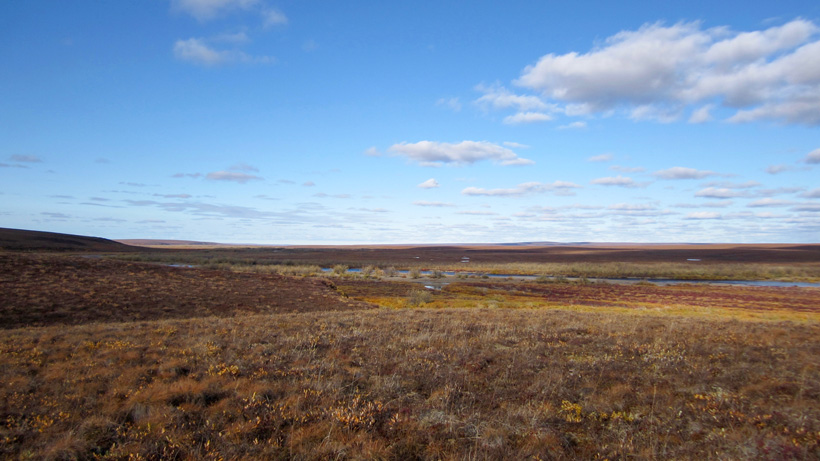 After a few more days of bad weather and not being able to spot more trophy bulls, the weather finally cleared up. 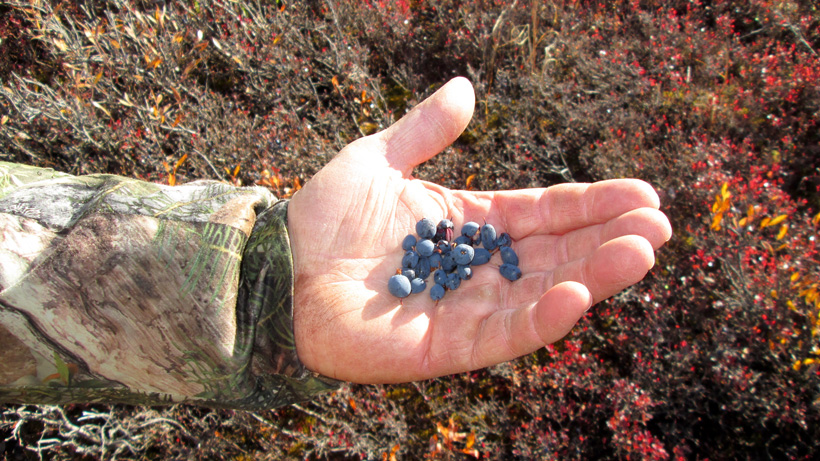 While trekking through the tundra it was always nice to pick a few blueberries. 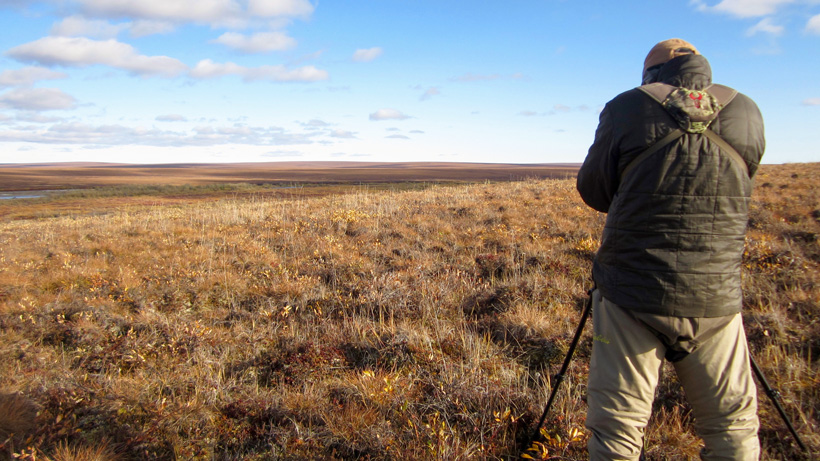 Glassing on our last night of the hunt finally turned up a trophy bull for my dad. 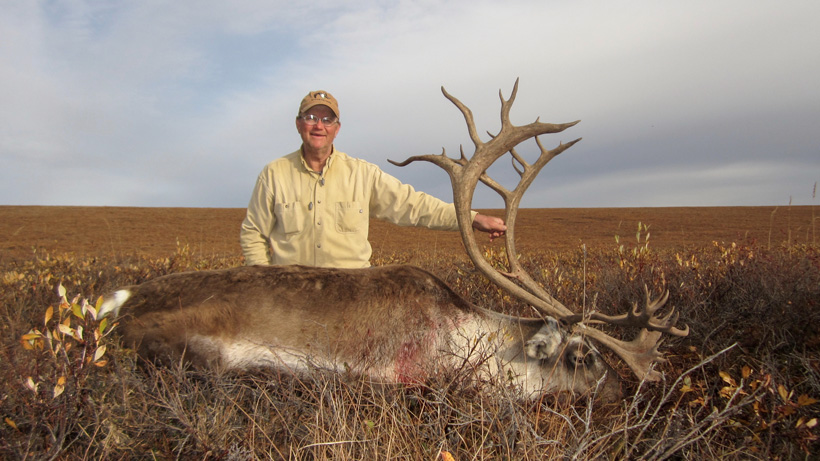 After a great stalk and a great shot, my dad was able to take this bull on our last night of the hunt. 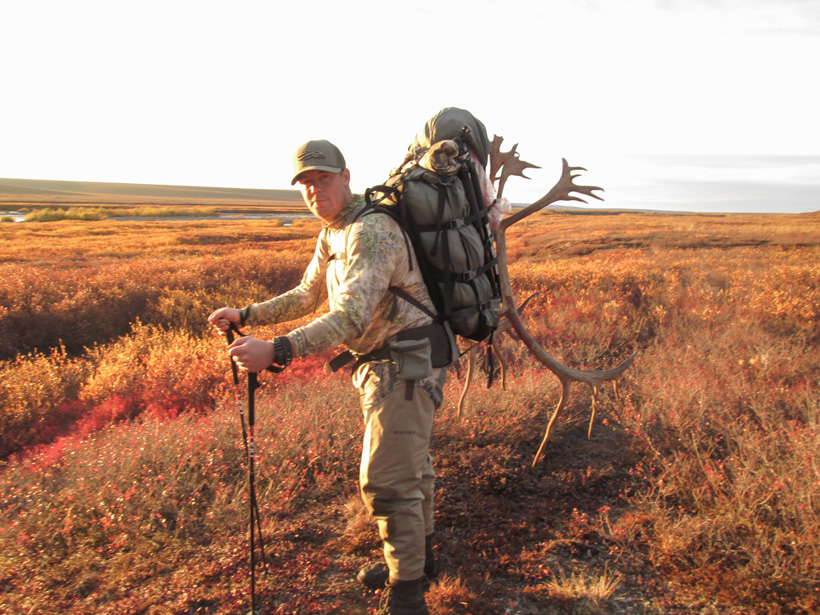 I’m loaded up with my dad’s bull. Now starts the four-mile trek back to camp. 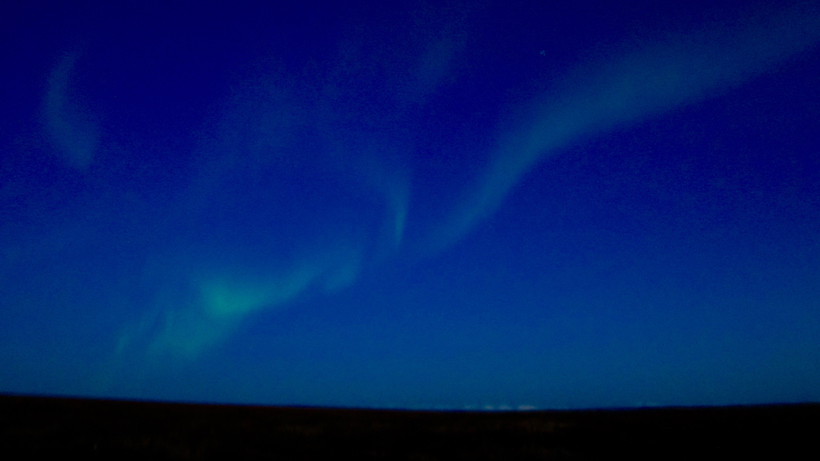 Once we made it back to camp we fried some caribou tenderloins and backstraps, and sat around the campfire reminiscing about the hunt and all our adventures. Suddenly, an amazing sight occurred. As the sun was setting in the west and the moon was rising in the east, the northern lights were dancing right above us! This picture doesn’t even do it justice. It felt so close, like we could touch it. It was an unforgettable experience to cap off a great hunt in the “last frontier.”