A lifetime of hunting dreams ends in 72 hours 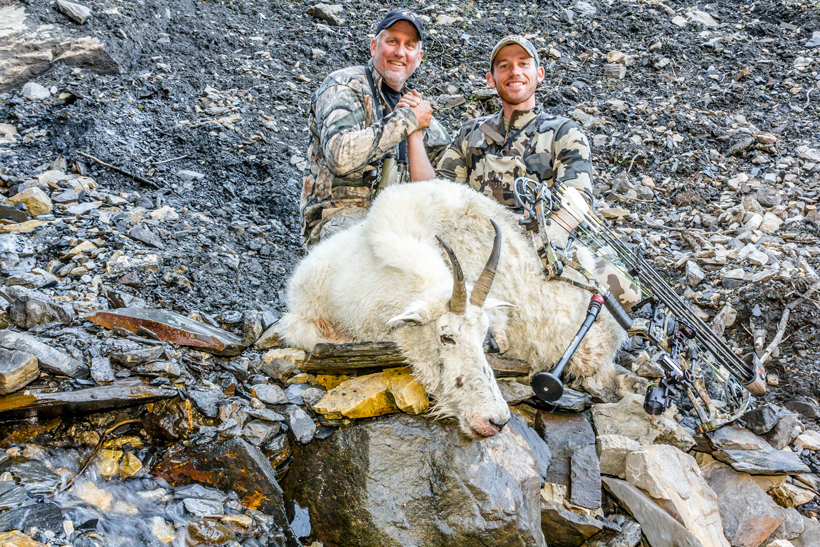 It was a long ordeal packing my archery mountain goat for the long trek down the mountain. I had shot the goat on the edge of a steep cliff and, in the process, the goat tumbled down into a narrow canyon. It was only the second day of my 15 day moose and mountain goat combo hunt in British Columbia. I was smiling from ear to ear. Read the full story on the mountain goat here. 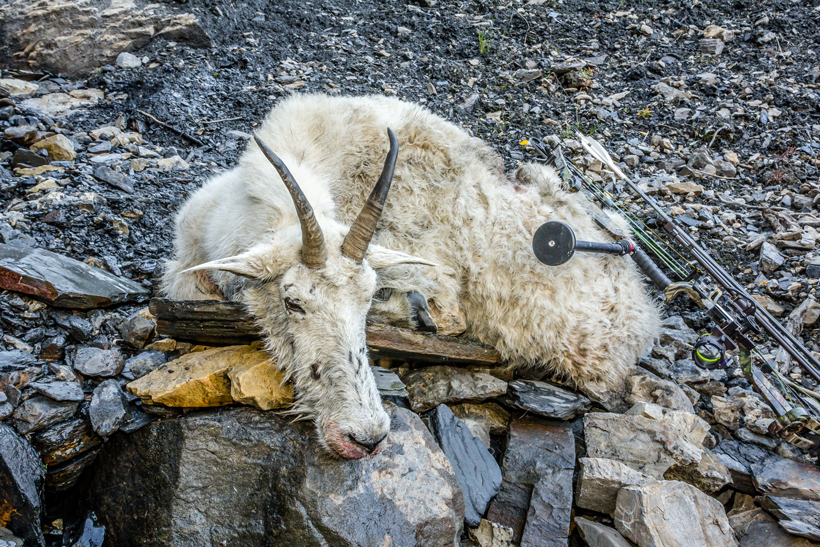 We climbed our way out of the narrow canyon with heavy loads of meat and the mountain goat hide and horns strapped to my pack. The entire time I kept reliving that amazing stalk in my head. I am very used to long drawn out hunts. This was the first stalk I put on a mountain goat. Talk about luck! I shared a lot of laughs with my dad as we made our way back to camp. 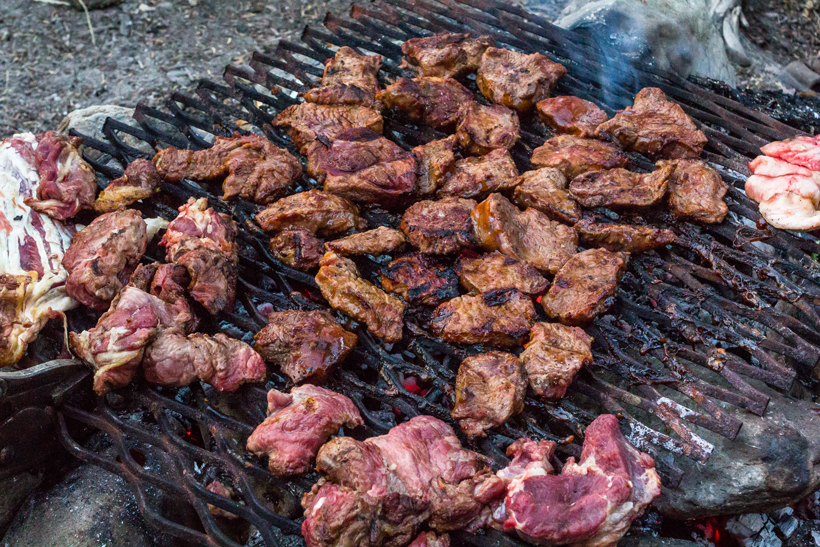 At camp, we unloaded the mountain goat into the meat cache and grabbed some of the tenderloins and backstraps to cook over the open fire for dinner. 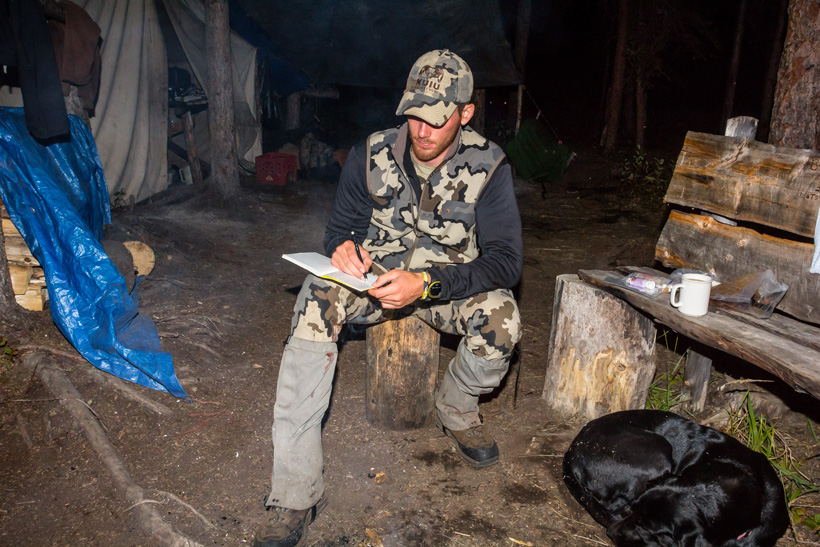 As we sat there, I told everyone the intricate details of the stalk and soaked up the campfire by spending a little time to write down information from the day in my hunting journal while enjoying a late night cup of coffee.

Tomorrow meant another day bowhunting this gorgeous place. My dad and I both had moose tags in our pockets. I was anxious to see what the next 13 days had in store for us. 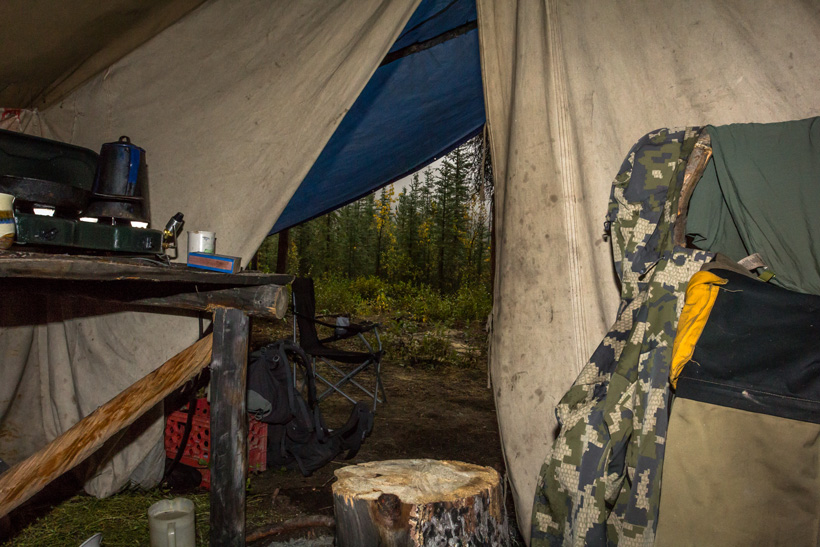 We woke up on day three to a cold and frosty morning. It was the first bone-chilling morning we experienced of this trip and it was a welcome sign. The mountain coffee tastes that much better when you looking out a wall tent with lanterns glowing with the anticipation of the morning’s hunt. We ate a hearty breakfast of pancakes and sausage and headed out, eager to start the day. 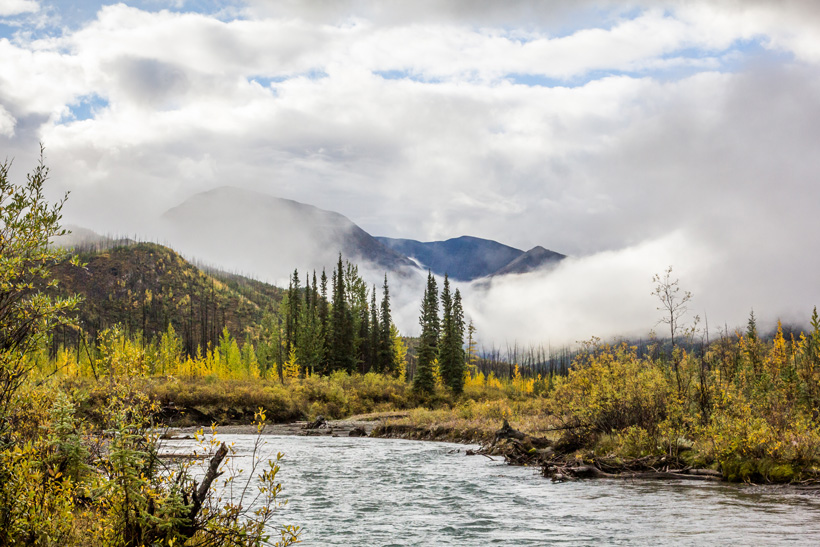 We decided to hike a short distance up the mountain behind camp to get a better look at the valley floor. Since we were literally camped in moose habitat, it was a great option after the previous day of packing meat. We had only hiked a quarter of a mile from camp when we spotted three moose in a meadow. Two cows and the bull with the “elk like” brow tines and droptine stood before us — the same ones from the day before.

My dad decided to pass on the opportunity, so I decided to make a try at the bull. My guide, Barrett, headed to the east to try to call at the bull to get his attention while I closed the distance with my bow. Getting close was tough due to the loud brush and the crunching of the frozen pockets of water.

At one point I was 57 yards from the bull, but I did not have a shot because of the thick brush in the meadow. Barrett kept calling while I kept working my way toward the bull. At one point I thought I was busted. The bull must have caught my movement and started to walk away. At that point, I heard Barrett change his call to a new tone. The bull instantly started to tear apart a tree with his massive antlers. Being this close to a rutting bull was the ultimate adrenaline rush.

All I needed was another 15 to 20 yards and I would have a shot. The bull finally had enough and started to walk away. I knew I had to act quickly so I opted for the classic Jim Shockey move (I knew my dad would be proud) and placed my bow on the top of my head with an arrow nocked. I tried to simulate a bull by swaying my head back and forth while grunting. Surprisingly, I made it another 30 yards closer to the bull across the open boggy swamp, but the bull had other plans, gathered his cows and went into the timber. 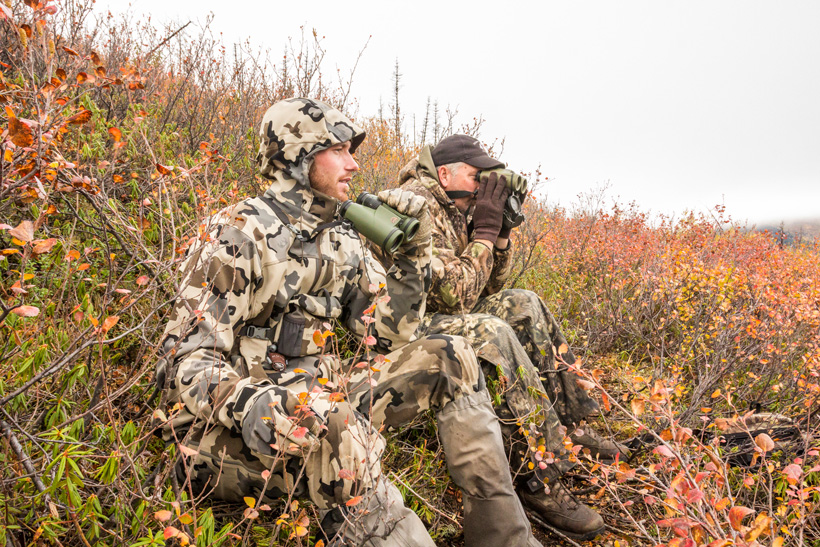 After the herd walked off, we hiked up the mountain to a small rock outcropping so we could glass across the valley. As soon as we started glassing, I found the same bull just standing in the timber off to my left. Barrett laughed and knew that I was going to go after him again. I left my pack with my dad and carried only the essentials on the stalk.

Everyone wished me luck and stayed on this glassing point to watch my stalk. I decided to stay high above the herd and work toward them like I was stalking a mule deer buck since they were right below the steep mountain. 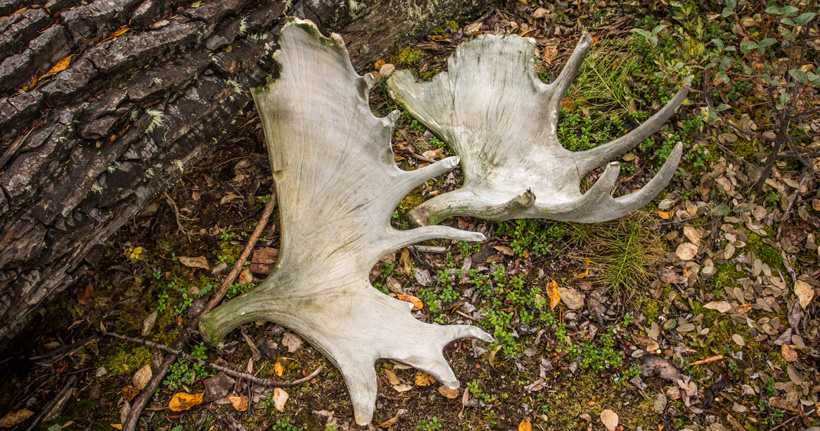 Silently, I inched my way closer to the bull and cows. I had to move incredibly slowly because of the noisy brush. Soon the rising sun would cause them to seek refuge in the dark timber and I knew I needed to get closer before I lost sight of them. 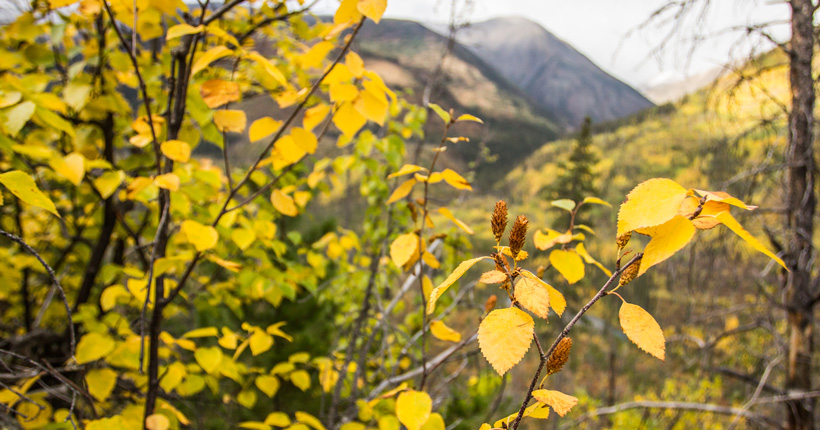 I kept close tabs on the bull. Whenever he would walk away or rake his antlers, I would move closer. Seeing and hearing this rutting action was amazing! After a long game of cat and mouse, I was closing in on them. Several times I thought I lost them, but then I would hear the reassuring sound of the bull grunting. 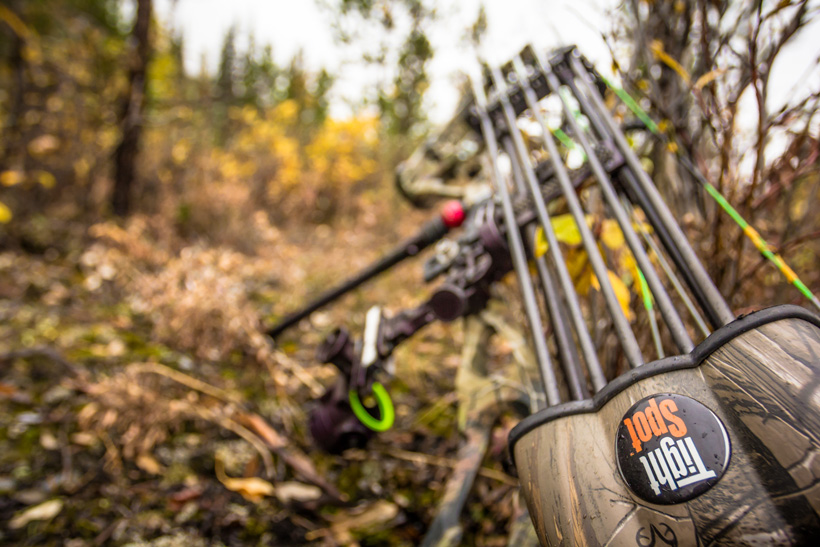 Soon, I was within 150 yards which made keeping an eye on his massive rack much easier. The hard part was keeping track of the cows because I did not want them to ruin my stalk. In the distance, I saw the bull walk off. I decided to cow call and rake the brush with a tree limb. The bull started to grunt and head my way. I got a little closer to him as he was raking another tree. One of the cows was feeding her way to me and eventually got within 45 yards, but the bull did not follow the same path. He worked his way to the other cow and was 53 yards away, but I did not have a clear shot. If only I was five yards to my left... then I would have a clear shot. The bull decided to walk off and bed down 80 yards away. One of the cows walked to his right and I ranged her at 65 yards.

Carefully I tried to get closer to the bedded bull. I only made it five yards before the second cow spotted me. I froze and tried my hardest to stand still. The cow seemed to look right through me. Ten minutes went by and the cow bedded back down. I checked the wind and continued my stalk.

Once again the cow heard my approach, but this time I had made it 15 yards. I slowly sat on the ground and waited her out again. Luck was on my side.

After she bedded, I tried everything I could think of to get the bull to stand back up. I raked a tree with a small log. I grunted and cow called. I even beat up the brush around me with the log. The bull would not budge. Finally, after what seemed like forever, I saw the bull’s rack start to move. He rose to his feet and, simultaneously, I came to full draw after setting my sight yardage. He took a few steps forward into my shooting lane and stopped broadside. My arrow was on its way and punched through both sides of the bull with the broadhead just exciting out the other side of his chest. 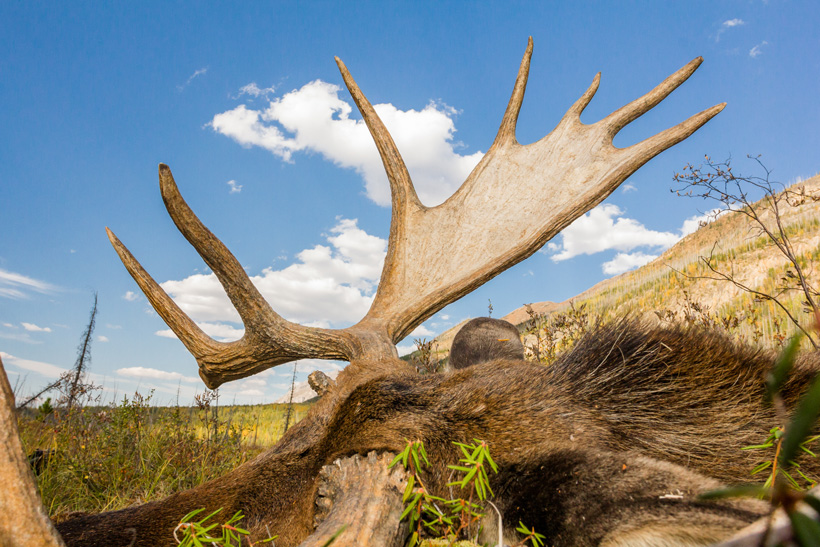 The bull went 40 yards and bedded down. 45 minutes went by when I saw him try to stand up and with weak legs he walked another 40 yards before falling over. I could not stop shaking and I had to lay on the ground to collect myself. 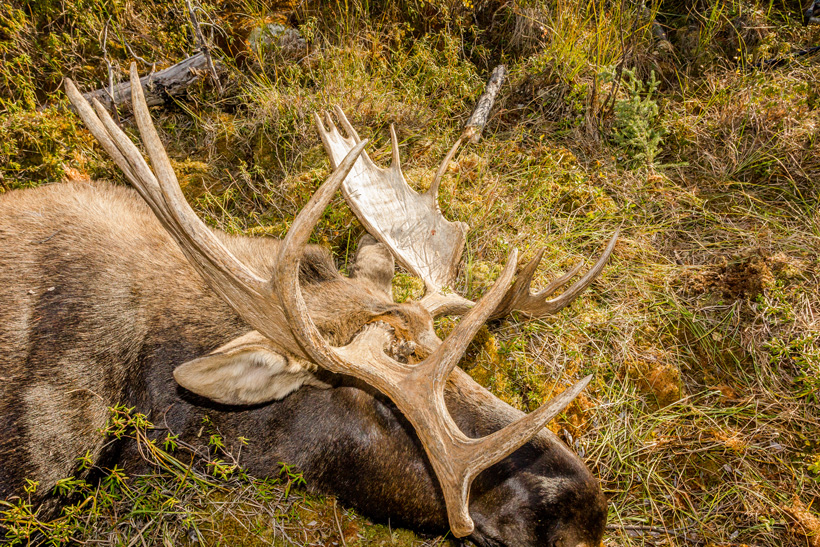 Here I laid amongst some of the most gorgeous scenery imaginable on the third day of my hunt and I had just arrowed a bull moose and also a mountain goat less than 24 hours before. 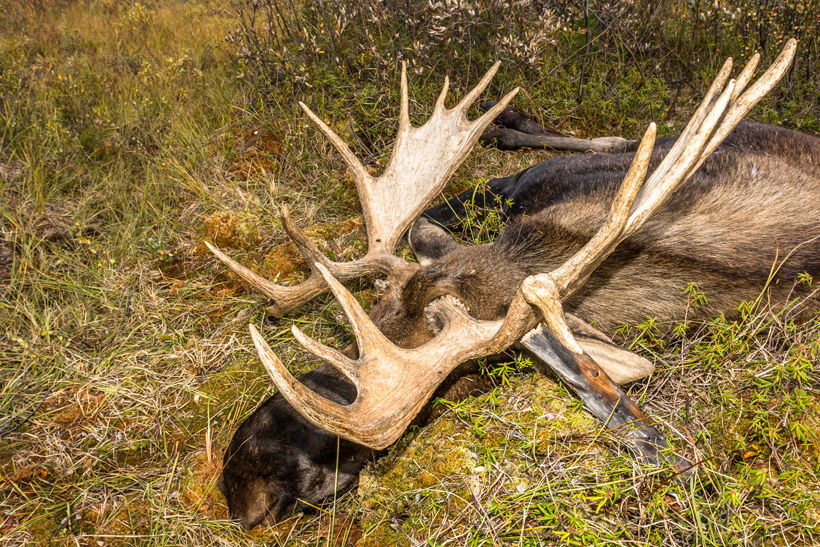 I slowly made my way back to my dad and Barrett. As I got closer, they could tell something was up. I threw my bow into the air and said, “I got the bull!” My dad came running over to me and gave me a giant hug. 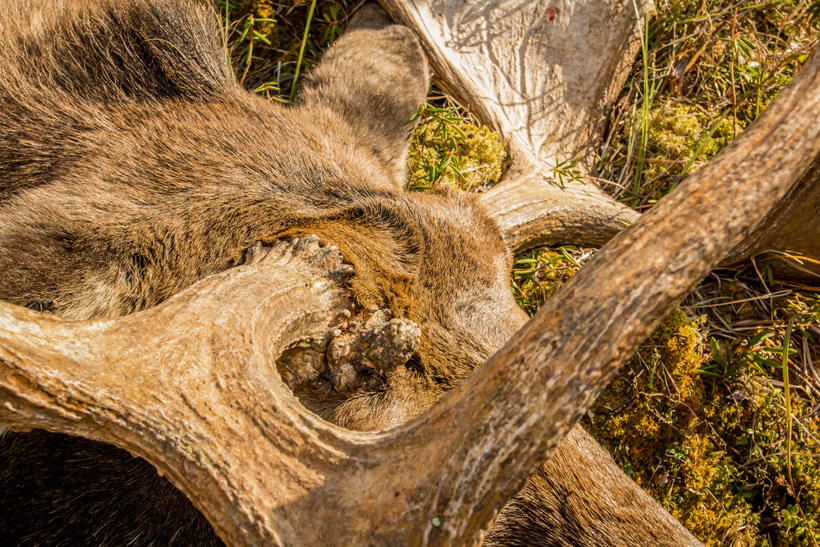 The bull was very unique. He had browtines on the right side that were similar to the shape of elk antlers and he also had a third horn growing from his skull. 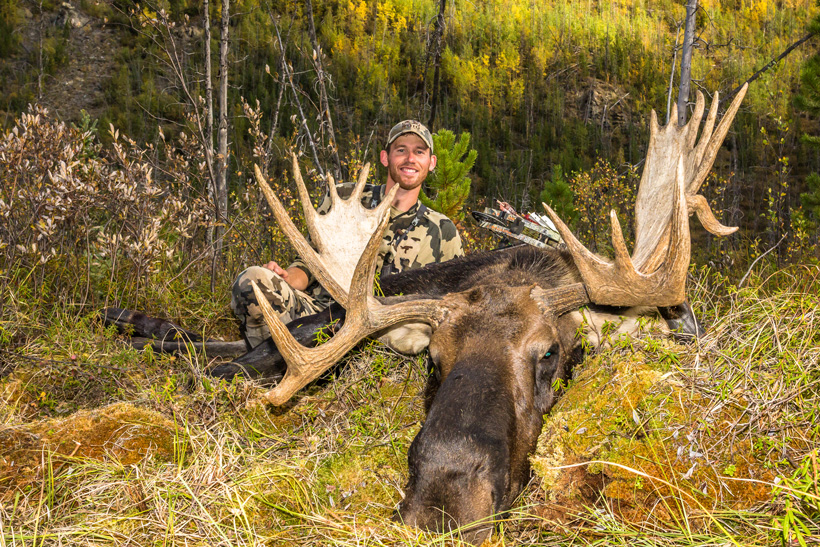 We took a bunch of photos and started to remove the giant sections of meat while chatting about this amazing place. This hunt will always have a special place in my hunting memories. 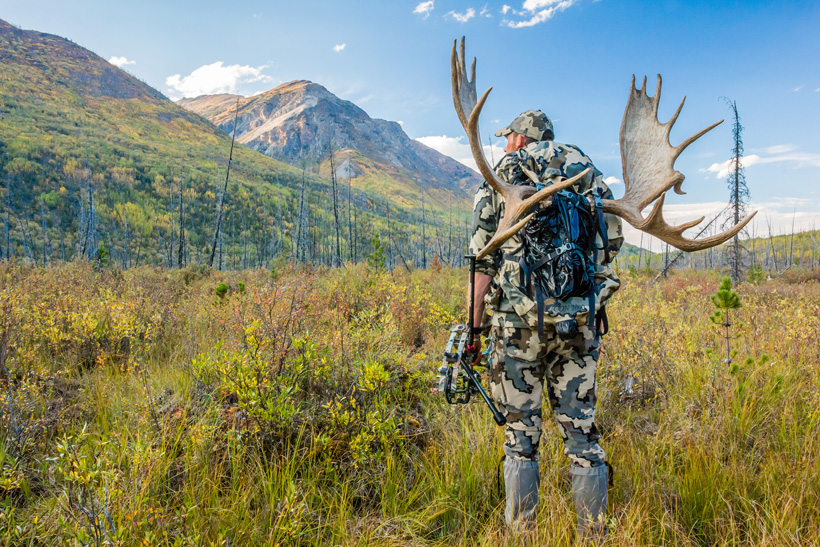 I would have never thought that in less than 72 hours I would take a mountain goat and a moose with my bow. 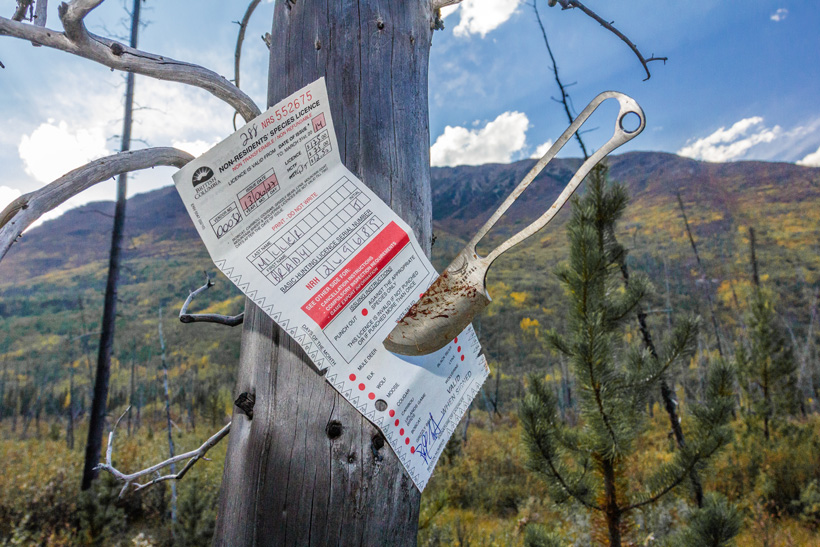 With my tags out of the way my dad had 12 days to locate a bull moose. It was now time to switch gears. I could not wait to see how the rest of the hunt would unfold. 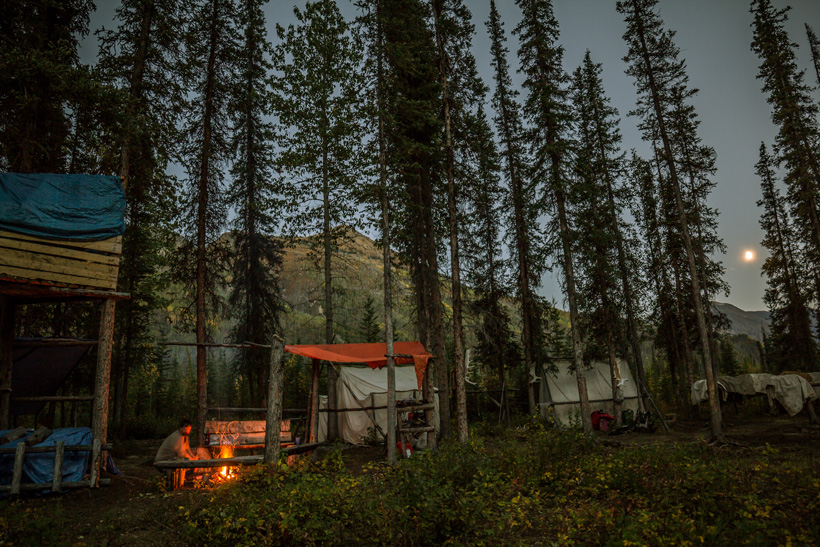