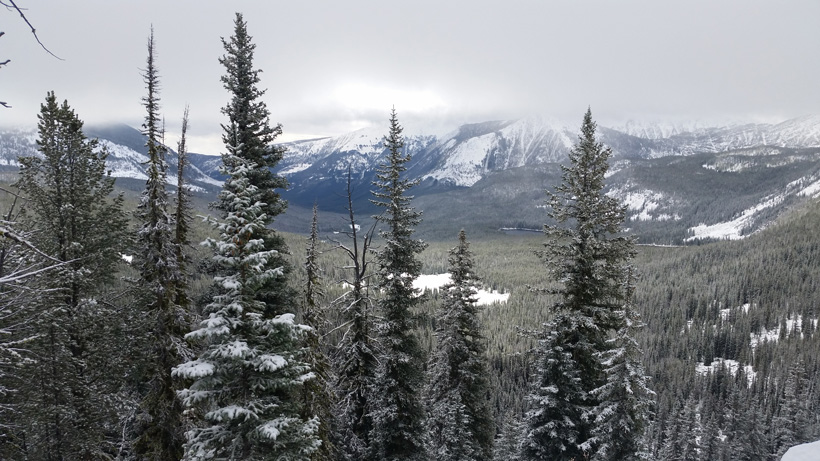 Mid-March was the start of a six-month preparation for what turned out to be one of the most epic adventures of my life. Morning runs followed by afternoon research and evening practice turned into a daily routine. Countless texts, Snapchats, and phone calls discussing the preparation for our upcoming 2017 archery hunt filled the downtime. All of that weighed on us as we entered camp this year.

Wildfires had hit the state of Montana hard in July. The smoke was so thick and widespread we knew we were in for a rough go all the way back in North Dakota where the smoke from those fires lingered.

...and like a Hail Mary pass, a September snowstorm hit the mountains just as we were heading west. The snowstorm not only cleared the smoke from the air, it helped put out multiple fires still raging across Montana. When you have six months of preparation riding on your trip, a September snowstorm turns out to be a surefire way to get our four-man group of Midwest flatlanders pumped up for elk hunting. 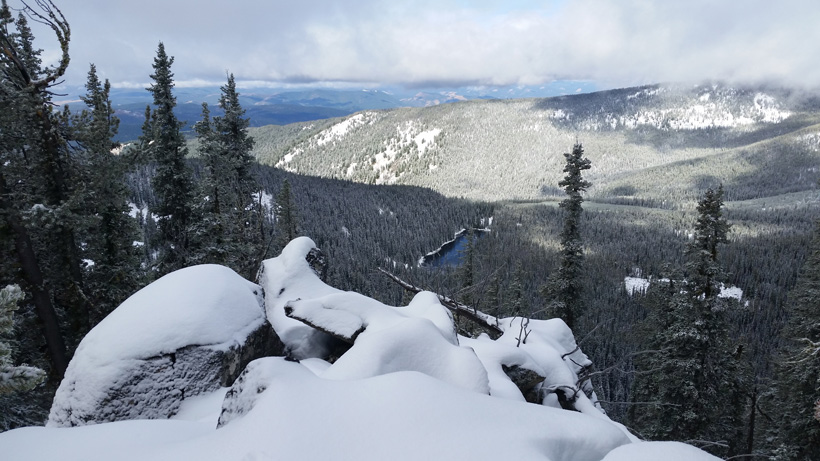 The Montana mountains ended up welcoming us to camp with 12” of snow. The scenery was incredible. We felt on top of the world. Our spirits were a force to be reckoned with...for approximately 12 hours. Once we were out in the snow—our Hail Mary—we realized what we were in for. Clearing trees from the road proved to be about as unenjoyable as you would think it to be. The boots that I owned for less than a year had already lost their waterproofing and the awning of our camper collapsed from the weight of the snow. 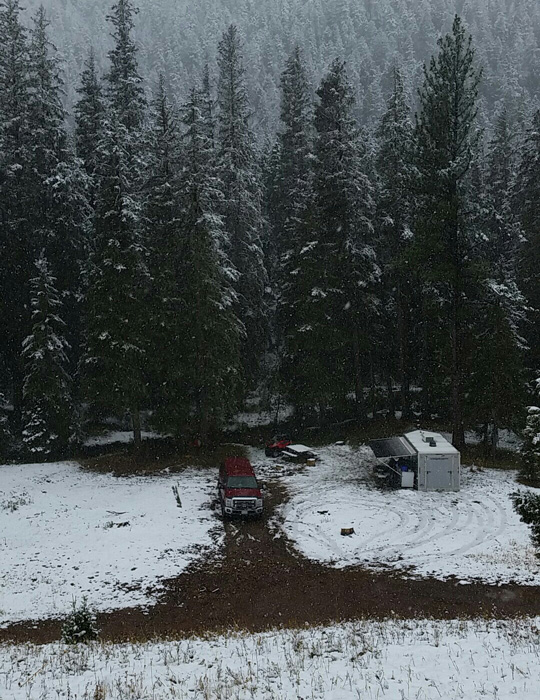 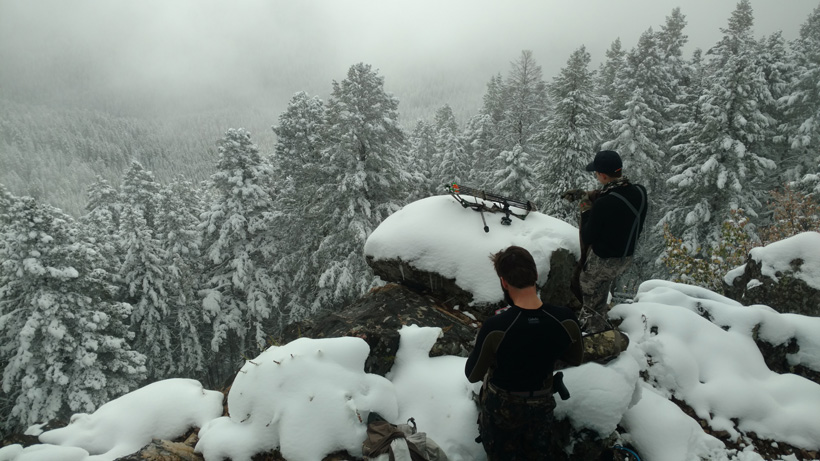 Rick, Travis, Alex and I mostly worked in two-man groups the first five days, putting many miles on the truck, ATV, and our feet. We didn’t see or hear a single elk during that timeframe. 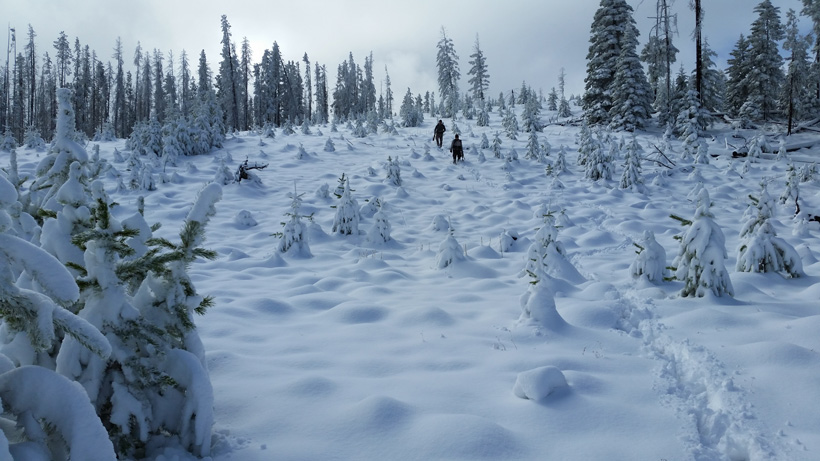 In those five days of scouting, we did manage to cut a few tracks at least. Snow continued to fall periodically throughout each day and night so, generally, we were working with a fresh layer of powder each day. At the start of day five, Alex and I set off on a 45 minute ATV ride and drove as far up the mountain as the snow would let us. We wanted to drop over the top into a drainage we hadn’t hunted yet so we started the rest of the ascent on foot. After two hours we were 400 yards from the top and we cut a fresh cow track. The cow track ended up crossing paths with a much larger elk that we dubbed “Bigfoot.” 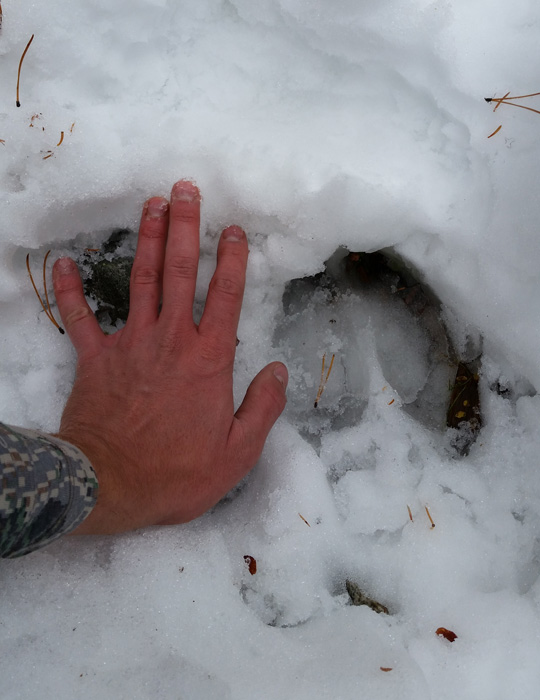 Our go-to tactics up to this point hadn’t yielded much success so Alex and I decided to follow Bigfoot’s tracks knowing the odds of us catching up to him were likely slim at best. Bigfoot’s tracks were nothing more than a leisurely pace though. Finally, the first adrenaline rush. We came across two of his beds, a raked tree, and fresh droppings. 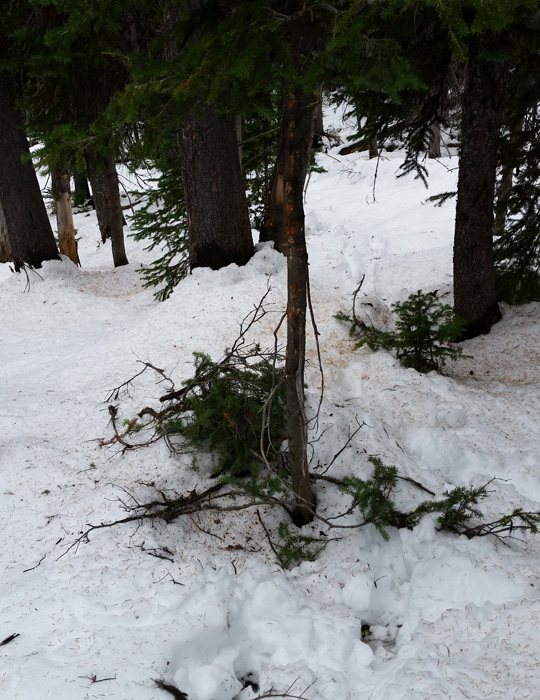 I knocked my arrow multiple times when we thought his presence was imminent. After his second bed, we noticed he had cut a cow's track and he followed it for a couple hundred yards. I began to wonder if he knew her tracks were headed the opposite direction. Shortly after that, I realized we had now spent the majority of our day searching for Bigfoot with just as much success as every other person. Alex and I started to wonder how many hours and mountains we were behind him. Bigfoot really threw us for a loop later that afternoon when his yet unhurried tracks crossed over the ATV tracks we made from our ride up the mountain that morning. We never did catch up to Bigfoot that day, but we gained some invaluable knowledge about the day in the life of a bull elk.

Five hard-fought days without seeing an elk. Our high spirits were basically a history book at that point. Luckily, as Midwesterners, we know there’s nothing a good whiskey and coke can’t fix. So we headed out to the local watering hole one night (perhaps to drown our sorrows) and it turned out to be the best decision we had made during that trip. We came across some locals who gave us a tip on a good hunting spot. We took the locals’ advice and started hunting a new unit 2,000 feet lower in elevation that was filled with bugling bulls!

The day after we had our lucky encounter with the locals, we heard a bull bugling and were able to close the distance to 85 yards that evening. We were set up for two hours trying to call him in, surrounded by the eyes of his harem. The chance to slip in closer never came as daylight slipped away, but what a relief it was to see (and hear) a bull.

We went out the next morning. Our high spirits had returned. We heard two bulls bugling almost immediately after getting to our predetermined ridge. It turned out one of them was on private land so we had to abandon hope of getting him. The other one was a bit call shy. We tried getting aggressive with him perhaps a bit too early. We challenged him and raked some trees, which appeared to only quiet him down. We stuck to cow calls and found that he was quite responsive, but also noticed that he started working away from us—up the mountain—to his bedding area.

So we ghosted his herd up the mountain. We let him settle in for about an hour. Right as we were about to get into position, we noticed some cows were up and feeding. The woods at this point were open enough and we were unable to move without being spotted. The cows eventually worked their way into our scent cone and the jig was up (there goes our spirits again). We had two days left of hunting and no other bulls responded that afternoon; it was time to get drastic. We decided to head to a clear-cut close to where we had heard elk the prior evening and set up an ambush in hopes that one would walk by us.

Two spikes came out into the clear-cut we were sitting in. We could hear elk in the timber heading down the mountain. Time was running short so I decided to move closer and cut the distance. I knew I only had about 15 minutes of shooting time left. I spotted a cow at 72 yards. I told myself if I could get 10 yards closer, I would take the shot. The end of our trip was drawing near and my freezer back at home was running low. I made it 5 feet and next thing I see is a set of antlers cresting the hill straight ahead of me. He was pushing a cow over the crest of the hill, right to me. The bull and another cow joined the cow I was closing in on and all of a sudden I have a bull and two cows stopped at 40 yards in front of me.

As they were closing in I had ranged the lead cow at 45 yards. The bull was facing me head on so I couldn’t take my shot. The bull bugled as I got my release nocked. From where I was, I could see his breath as he bugled in my direction. He stood there for a brief moment staring downhill right through me. The cows were far more aware of their surroundings and seemed to hold their focus on me much longer than the bull. The bull turned to his right to tend to his cow, I knew this was my moment.

I drew back as he turned to his right and both cows snapped their focus on me. I let out a soft cow call with my mouth reed and the bull stopped broadside. I settled my 40-yard pin on his vitals. I touched off my blood red nockturnal and all of a sudden, the woods became dead silent. My arrow entered his chest and he started running away. I let out a series of cow calls to calm him down. He slowed his sprint to a jog and eventually a walk. He stopped in a dry creek bottom about 100 yards away and his back legs became unstable. Seconds later, he was on the ground. My brain was spinning. How did we go from six days of what felt like a failure after failure to a dead bull elk in front of me with just minutes left of shooting time? 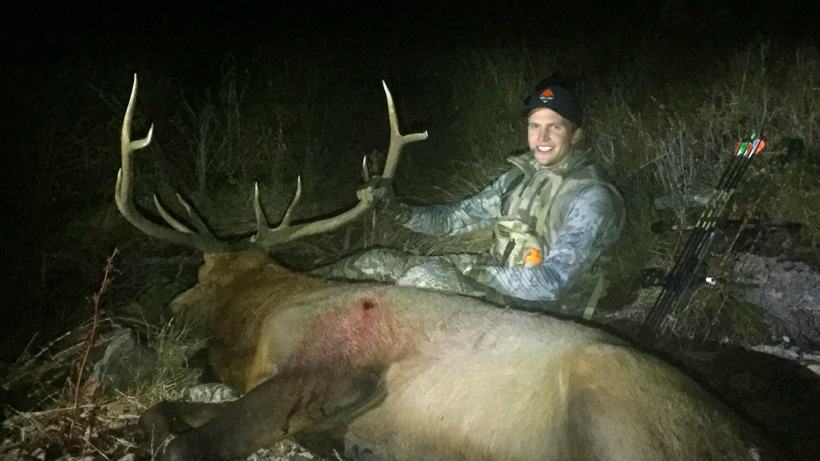 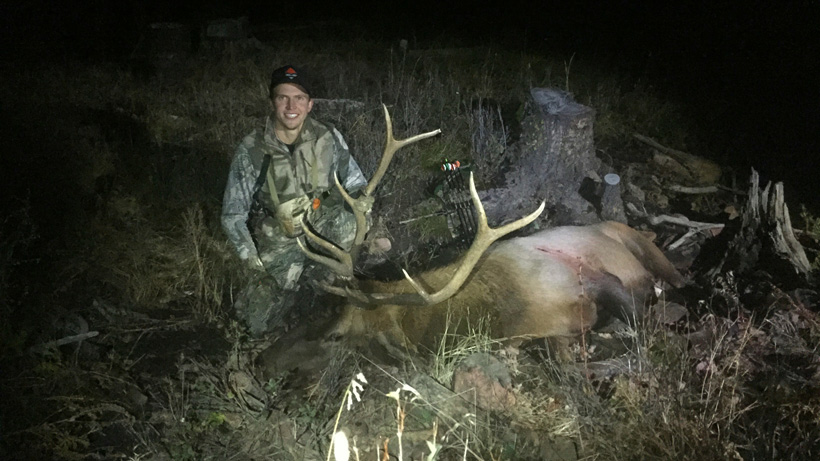 My first elk was a beautiful 5x5 bull. Taking him was an incredible experience and I’m blessed to have shared the hunt with some great friends. I’ll be eating like a king this winter! 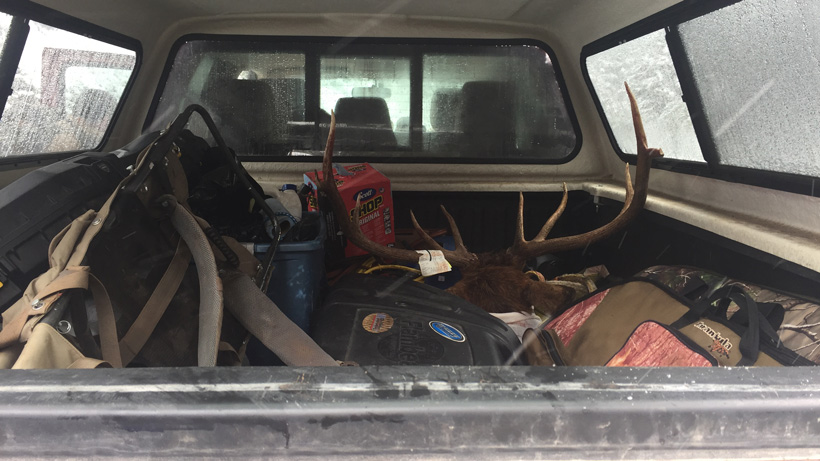 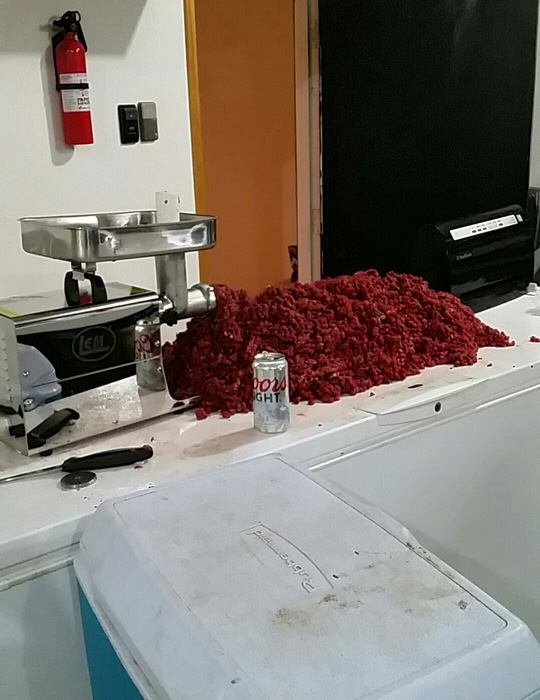