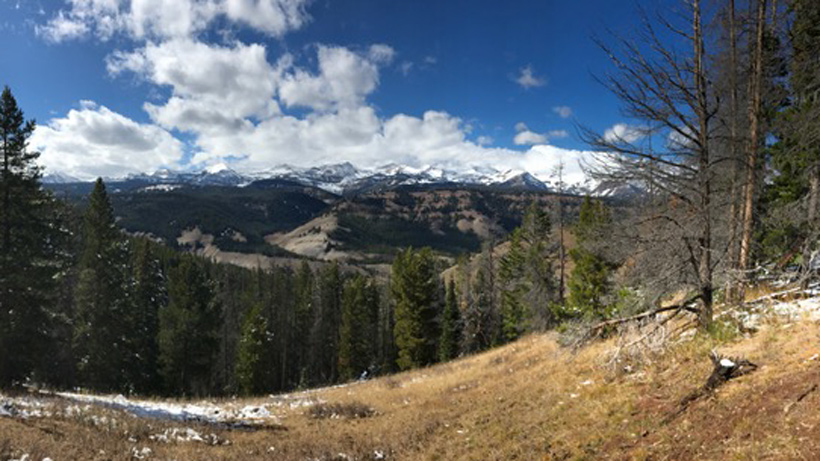 In a society that does not always prioritize selfless behavior, a recent hunting trip reminded me why giving back has so much value, especially when the recipient is your own father and the destination is the high mountains of Wyoming. To provide some perspective, as of last year, my dad, age 63, had never shot a bull elk in his 40+ years of hunting. He harvested many other elk (spikes and cows), but, for a rancher living in Wyoming with the Rocky Mountains out his back door, you would expect a beautiful trophy mount over his fireplace. Somehow, something always prevented it. For example, at age 25, after a grueling hike, he and a friend came upon a terrific 6x6 standing broadside at 150 yards. The bull was oblivious, providing a great opportunity. My dad lowered his Winchester .30-30 lever action rifle with iron sights and let loose a miss. Confused and unable to locate my dad, the old bull simply stood broadside while my dad emptied the gun. His friend started feeding him single rounds while he kept trying to hit the elk. After 10 rounds and what must have seemed an eternity, the bull finally located them and ran off.  My dad was dejected, made no better by his friend exclaiming, “I was sure he would drop with every shot.”

It happened again, 15 years later. I was with him and my siblings on my first elk hunt. I was nine years old and obviously thrilled. We had no luck in the morning so we regrouped at noon to have lunch. While munching on sandwiches, Pringles and V8 juice (a family tradition), we heard something behind us. We brushed it off, especially since we were not especially quiet. When we heard it again, we turned around and stood face-to-face with a nice 6x6 and two spikes flanking him not more than 10 yards away. To say we were shocked is an understatement! My dad yelled, perhaps, the most obvious statement possible, “You’re a bull!” at which the elk predictably scattered! He grabbed his .30-06 and leveled it at the bull, which immediately ran downhill in a small draw before heading for timber. I still remember vividly the dust cloud under the bull’s stomach just before he disappeared from our lives.

These missed opportunities combined with years of ensuring my success instead of his own prevented my dad from ever getting a bull. Indeed, it was my dad who offered to check a high ridge years later, producing my first trophy class bull. These thoughts lingered with me, bothering me for some time. While I was in a rigorous graduate study program I couldn’t do much about it, but that changed in 2016 when I could finally devote time to helping him. I fully expected to find him a bull that year but the curse continued. On the third day of the hunt, we separated because I wanted to check out a new area after seeing few elk during the first two days. Predictably, when I arrived at the top of my ridge, there was a nice 6x6 feeding in a small meadow. My dad was a mile away and out of communication range. We never saw that bull again.

I refocused for 2017, making my dad’s success one of my top goals. Even though I live in a different state, I traveled back home for several scouting trips throughout the summer and fall. It was an especially dry summer so the elk were not in the normal areas. I was frustrated. Without warning, my dad’s health declined. He received a diagnosis of diabetes and his gallbladder began failing. At his age, there simply were not many opportunities left. In late August, my dad had a gallbladder attack requiring emergency surgery. When it rains it pours and I won’t deny I started doubting whether this was possible, but I had counted on him for my whole life so he could count on me to find him a bull. 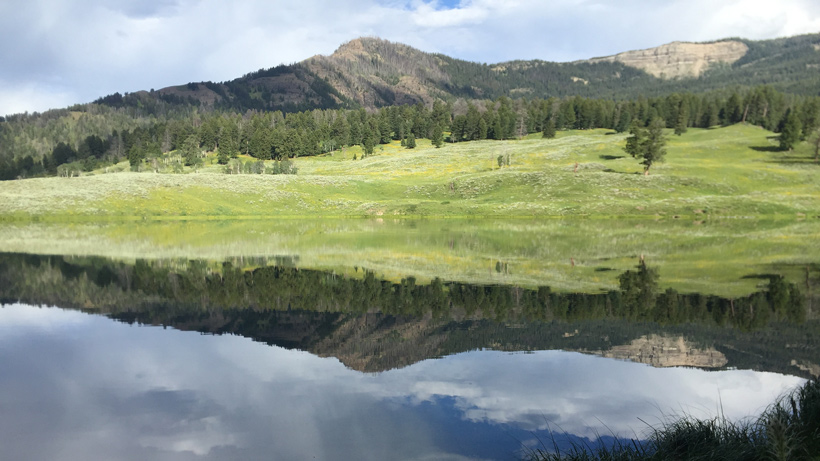 I doubled my efforts by scouting new areas, contacted any person that might have relevant information and performed hours of research on goHUNT INSIDER and Google Earth. It seriously helped me a ton, and was also absolutely critical in helping me get my bison tag and Wyoming elk tag this year. Props to you guys for having a great product.. With only several weeks before opening day and my dad feeling much better, I checked an area I previously wrote off because it didn’t seem like ideal elk habitat. My brother, Mark, came with me for additional safety after a run-in I had with a black bear the previous week. An hour into our hike, we were already excited. Elk sign was plentiful and fresh with everything from fresh beds to scrapes to scat to wallows and easy access to food and water. Suddenly, we spotted four bulls and a spike on an adjacent ridge, with one of the bulls a mature 6x6. We scouted the rest of the day and found more elk, including a raghorn bull we chanced upon feeding 15 yards away. We knew it was a solid area and decided on the spots to hit opening day. We were especially excited about a small meadow we thought ideal for first light. We quietly slipped away so as not to spook the elk.

I arrived several days before the opening to pack all necessary supplies, set up camp, and get feed for the horses. Unfortunately, the forecast portended rainy weather with a full moon. My dad and I refused to let that dampen our spirits and took a nice horseback ride up a nearby canyon the afternoon before opening day to simply enjoy the beautiful views and time together. 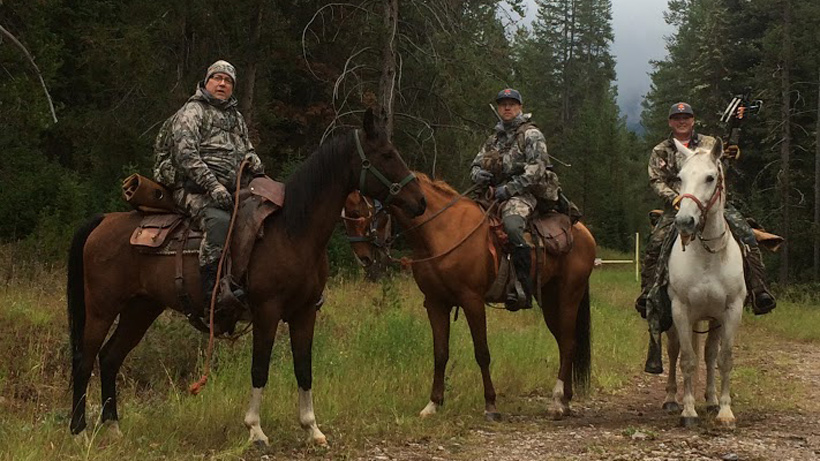 Alarms sounded bright and early at 5 a.m. It rained all night and was still falling and luck was finally on our side when the storm suddenly stopped. We quickly loaded our gear and set off down the trail with the horses. After two miles, we hit a point I previously selected as a good dismount location roughly half a mile from the meadow. First light was only minutes away and I wanted us in position. The previous night’s rain provided us with a quiet approach so we made good time. I was in the lead when the meadow came into view. I immediately saw 10 elk feeding close to the timber. I instructed my dad to proceed to the left of the trail, staying hidden in the trees. I then took his gear and mine to stash while I grabbed the monopod and camera to hopefully catch the action on video. 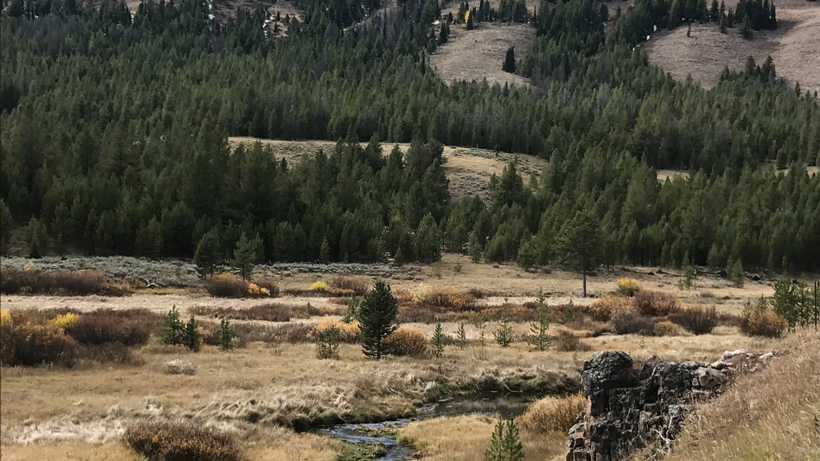 As I made my way towards him, I found him kneeling 30 yards in front of me on the opposite side of the trail. He was exposed, but there was no time to change; several elk were already looking at him. My dad spotted the biggest bull right next to the trees. I couldn’t make him out well but knew he had ivory tips with a beautiful light coat and he was standing broadside. My dad made the most out of the situation and quickly set up in a kneeling position. Without warning, my dad’s custom RMEF edition .325 WSM reported. I saw the bull and other elk immediately turn and head for the safety of heavy timber. Likely remembering his prior experience, my dad also squeezed off another round just before the bull vanished into the trees. It all happened so fast I didn’t really have time to process it. I ran up to him and with excitement asked how he felt about the shot. “Not good… I think I missed,” he replied.

Not again. Everything had gone so well that morning and I did not want to hear that reply. I literally felt sick to my stomach. I also felt incredibly bad for my dad. I felt slightly angry he didn’t follow my instructions and wait for me. I felt disappointed we may not have an opportunity like that again. We did our best to remain positive and went to inspect the area where the bull stood when my dad took his first shot. We found tracks and slowly followed them hoping and praying and wishing for some red on the wet green grass. Nothing. We went to the location we thought he entered the trees. Nothing.

Understandably, my dad was disappointed and, despite some additional questions to assist in our search, it was clear he did not want to talk. He decided to look in the trees while I went back for our gear. It was a tough pill to swallow, but there are no guarantees in hunting and I knew we had some other positive areas to check that day. When I arrived back at the meadow, I joined my dad to begin hiking up the ridge. I told him to stay positive and that we could check one more time on our way as it grew lighter. Twice we thought we saw blood, but both times it was simply a trick of the eye. We both wanted so badly to see something.

Then, just as we were leaving the meadow and were walking closer to the trees than I previously had, I suddenly saw a large red raindrop on a blade of grass. I leaned down, not wanting to get my hopes too high and knew it was elk blood! I quickly called my dad over. He did not believe me. I grabbed the blade of grass and held it up for him to see. Realization dawned on his face immediately accompanied by a large smile! We followed the trail and found a large clot 20 yards further. The blood trail grew in size as it entered the trees, but we still could not see the elk. We began zigzagging up the ridge when suddenly my dad stopped. There, nestled in a quiet grove, was his first bull elk. 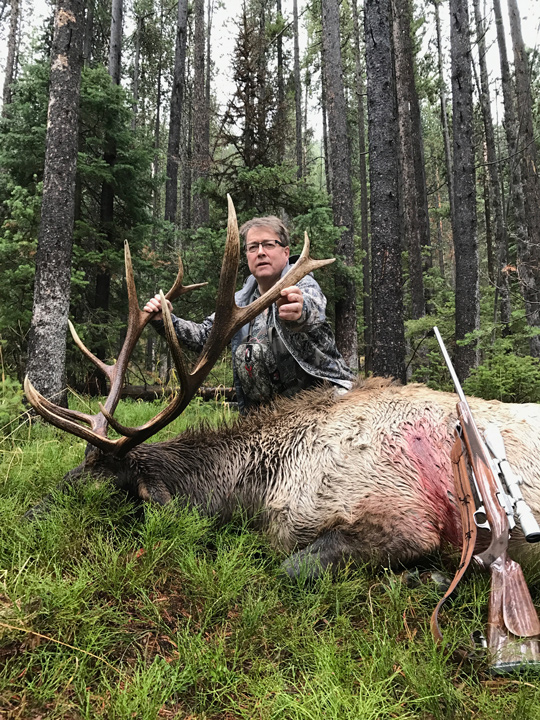 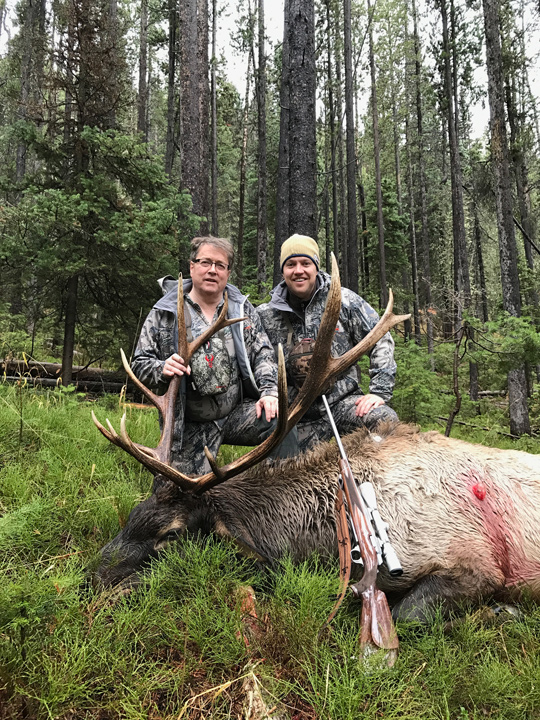 I went from the lowest of lows I have ever experienced on a hunt to literally my highest high. Truly, Booker T. Washington said it best when he declared, “Those who are happiest are those who do the most for others.” Elated, we couldn’t wait to share the story with the rest of our family along with 200 pounds of meat from a monster elk! 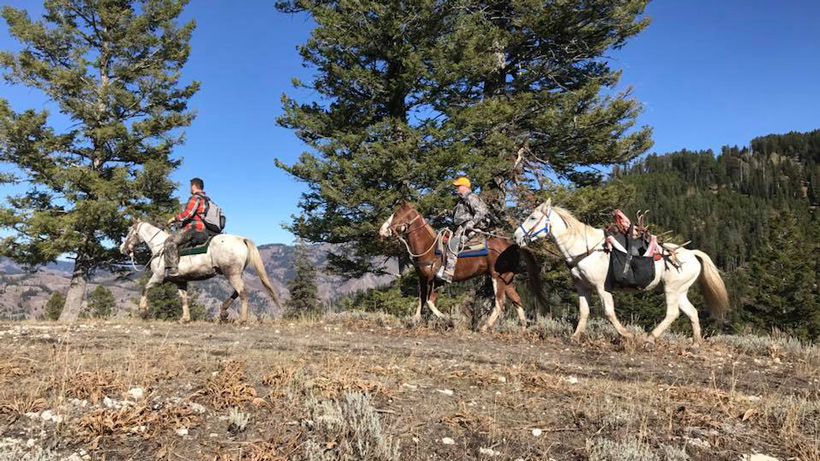 With my dad’s previously stated health concerns it was a beast dressing, loading and packing that elk off the mountain, but I felt it a privilege to share such a great memory with him. After all, he has given our family and me, I was incredibly grateful to give something back to him. 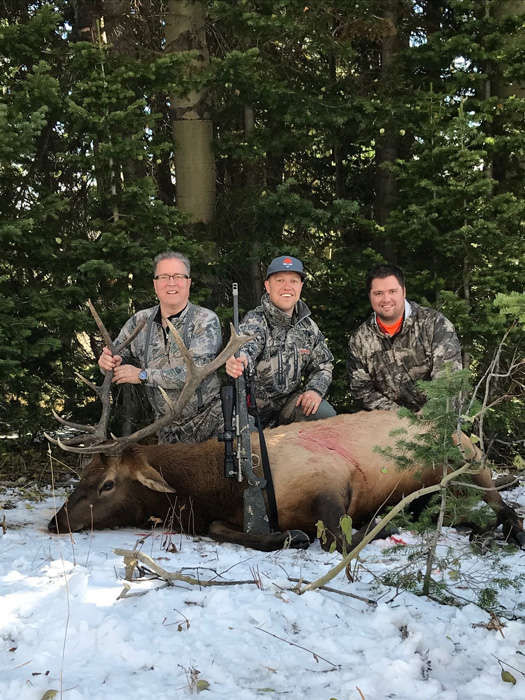 We also managed to have more success on a different hunt. But that is a story for another day. 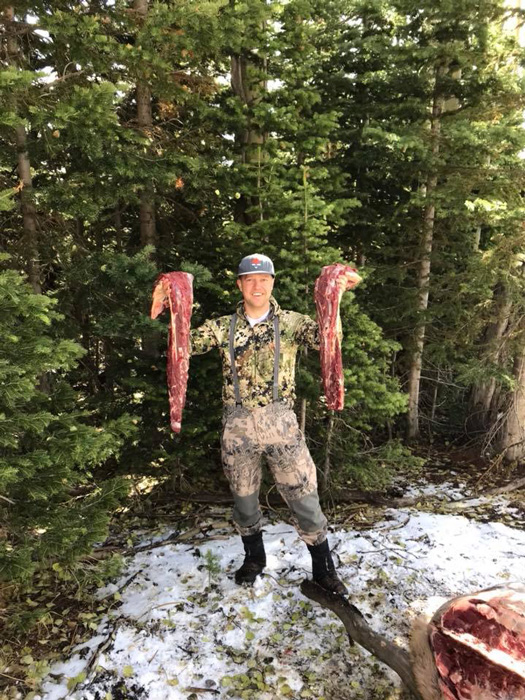