14 day elk hunt comes down to the last day

I thought this would be the best year to draw an archery elk tag in Utah since the season ran until Sept. 16 which allows for better rut dates. So before the application deadline I decided to use goHUNT’s Filtering 2.0 tool on INSIDER to help me find a unit that I could draw this year. With 15 bonus points, the draw odds said I had a 52% chance of a drawing in the Book Cliffs, Bitter Creek/ South so I went for it and got it! 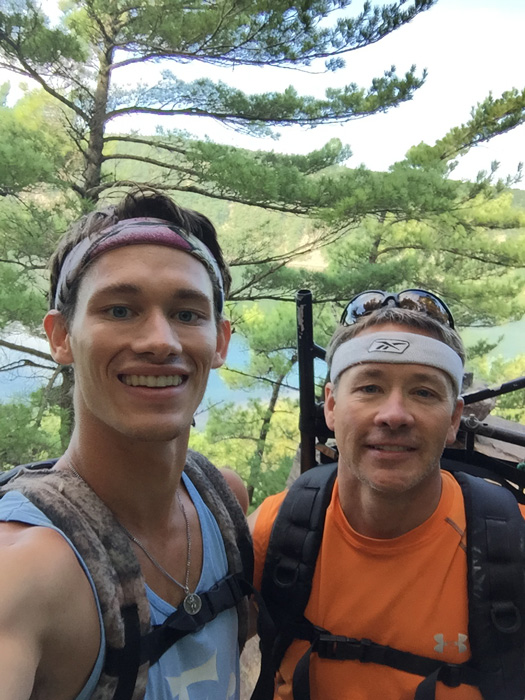 My son and I getting into "hiking" shape.

In anticipation of drawing a tag, I started working out and shooting my bow five to six days per week. As September approached, I felt great about my physical fitness and shooting. My son, Patrick, a 2016 graduate of the University of Wisconsin-Milwaukee, and decided to come with me. As a Division I soccer player I didn’t have to worry about him being in shape. 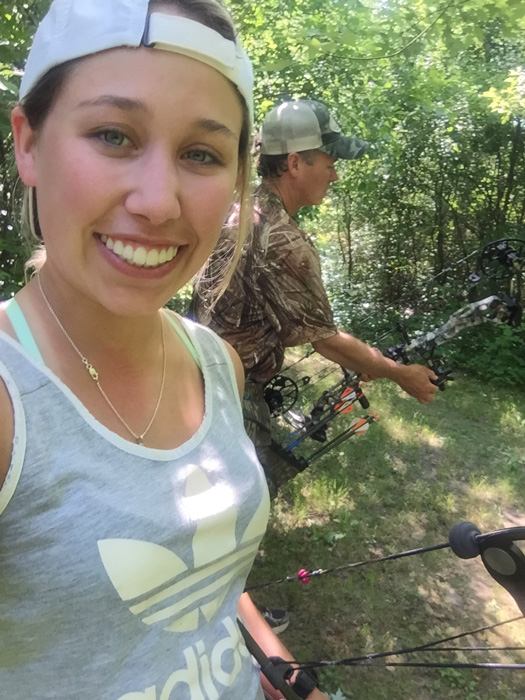 M y daughter, Anna, and I are practicing at a local 3D shoot.

I contacted Shawn Labrum at Wild Mountain Outfitters. I told Shawn we wanted someone to just show us around. We wanted to bring all of our own gear and food and do most of the trip on our own. Shawn agreed to show us around the first day and then leave us on our own until the tenth day. Then, he would come back and help if we hadn’t made a harvest. 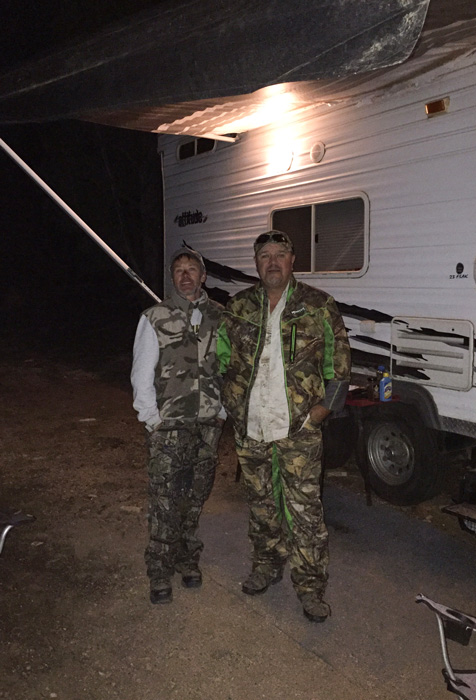 Shawn Labrum and I back at camp for the night.

We left Sept. 1 and arrived the next day, quickly setting camp up that afternoon. After that it was off to learn some of the areas with Shawn. 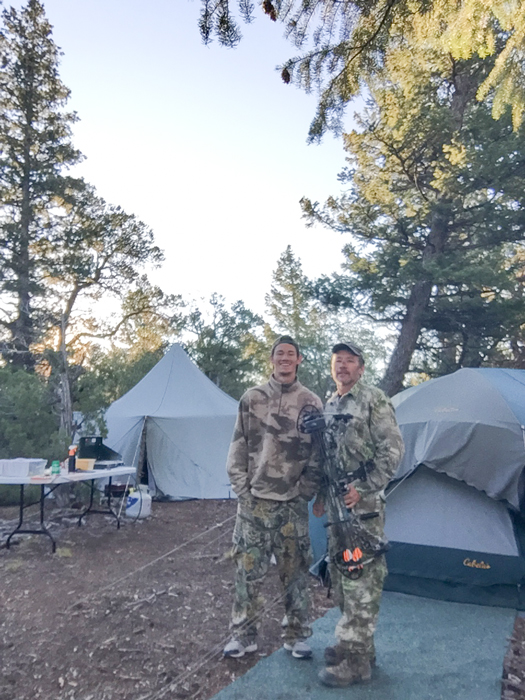 Father and son back at camp.

Early stages of the hunt 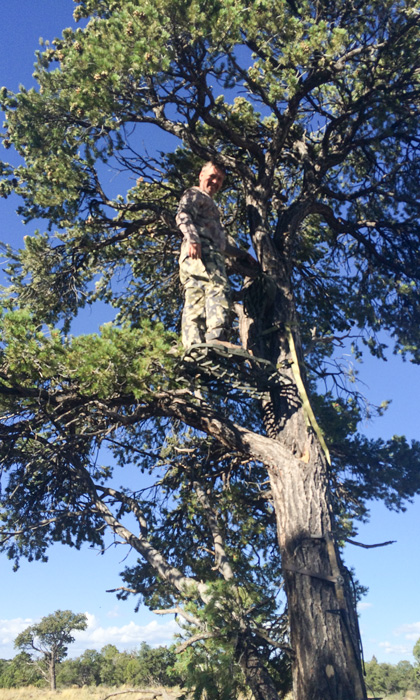 Setting up a treestand for the bowhunt.

Things started pretty slow. It was hot and dry and we didn’t hear a bugle for the first four days. On day four, we glassed our first decent bull in the morning along with 12 cows and decided to make a move on him. We circled around them, managed to get the wind right, and, soon, the whole herd was coming toward us. As the cows approached us, the fourth cow turned and walked right toward us. About 10 yards away, the bull then popped into view. I could tell the lead cow was getting nervous so I tried to draw and got caught. They all bolted and that chance was gone. 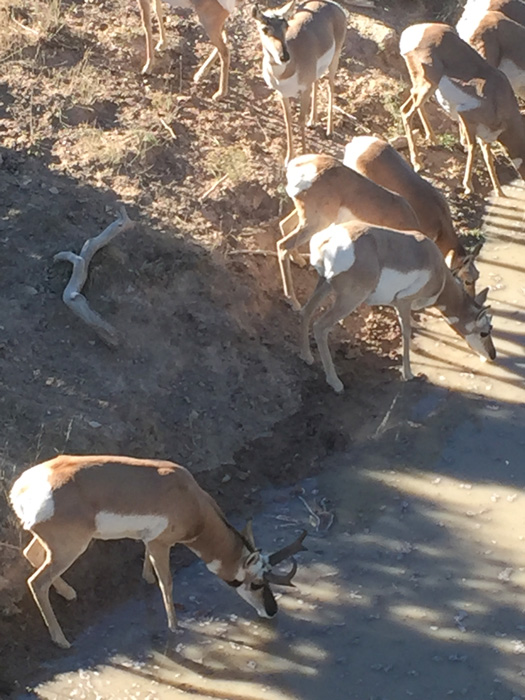 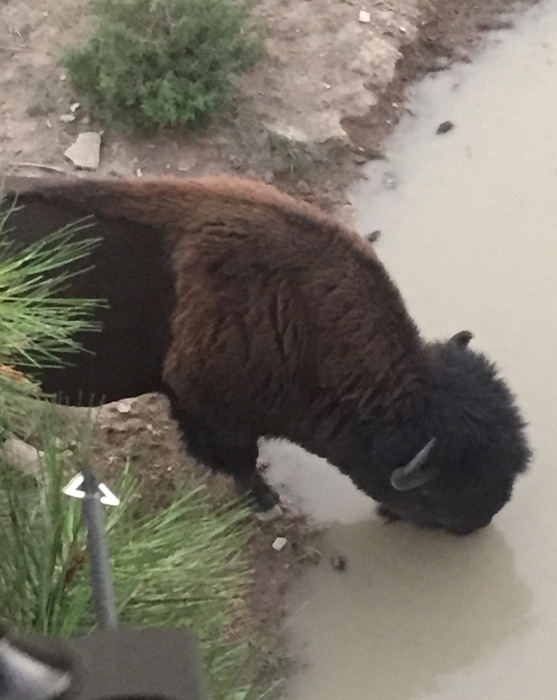 On some of the warmer evenings, I sat by water. One fun night in particular I saw antelope, buffalo, and a cow elk. 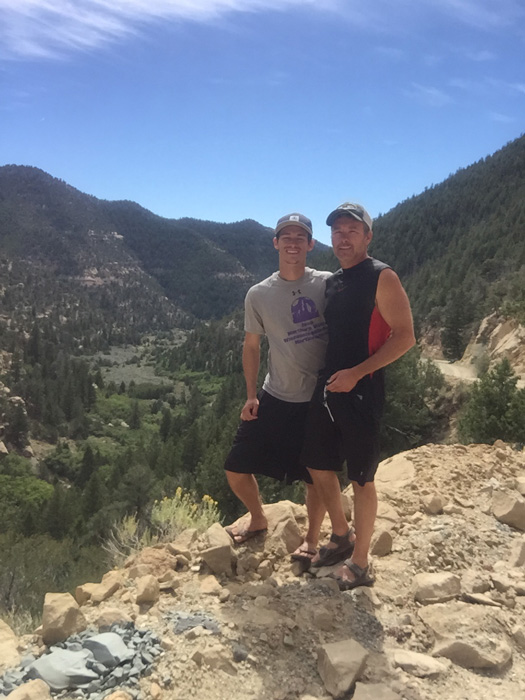 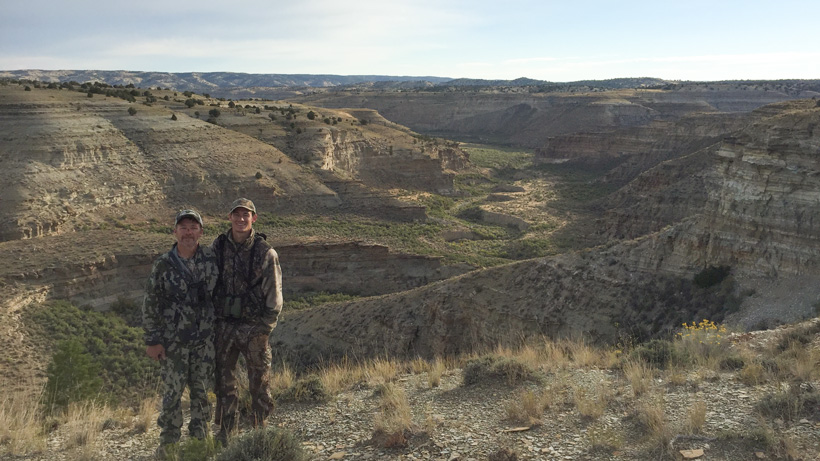 During mid-day downtime, Patrick and I took time to check out some of the beautiful scenery in the Book Cliffs. 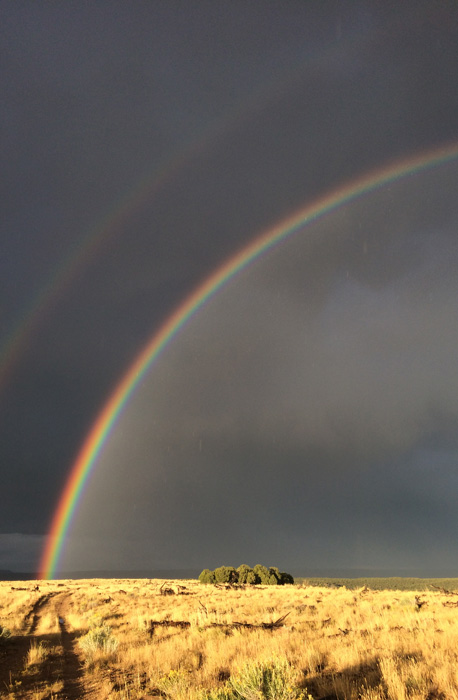 One of the many storms that occured on the hunt.

While taking a break during a morning hunt, I looked at my GPS. Yet, about an hour after that break, when I reached for my GPS, I realized that I didn’t have it. We backed tracked and looked hard for it and we never were able to find it. The next day my iPhone fell out of the truck without me knowing it and, when we backed up, we ran over it, crushing it. Feeling down from those costly mistakes, I tried to stay positive. 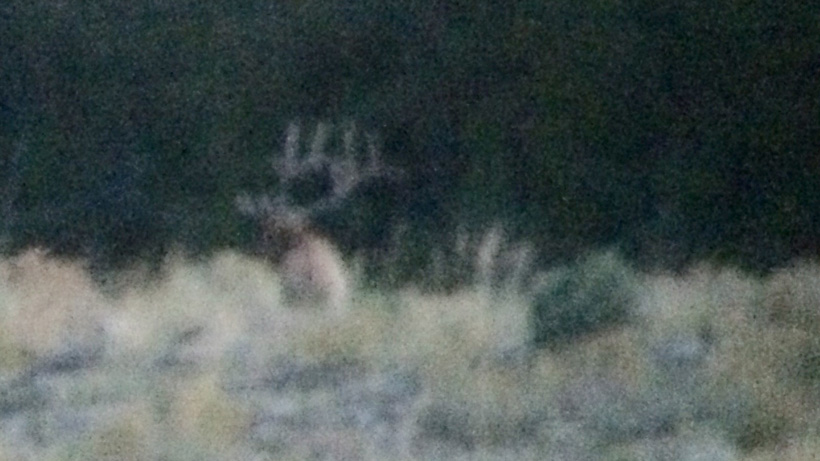 Photo taken of a large bull from a long ways away one evening.

Over the next four days, Shawn was back in camp and we started to see some quality bulls, but we were never able to get into bow range.

Patrick and I were back on our own for the final day of the archery season on Sept. 16 as Shawn had antelope hunters to take care of. We decided to hunt a clear cut area where we spotted a big bull. With only two faint bugles and no elk spotted, we decided to leave and head to an area where we had seen a good bull the day before.

This area had good glassing points and we immediately spotted five cows feeding in the draw. Then, we heard a bugle, but we couldn’t see the bull. We moved to another point and he bugled again, but we still couldn’t find him. He bugled just enough for us to move one more time before we finally found him. The bull was bedded down at the bottom of the north facing slope looking out into the sagebrush draw with thick timber at his back.

Patrick stayed on point while I began my stalk. With a slight breeze from the west, I circled around the bull and came in from the east. The ground was very rocky and noisy. As I was getting closer I remembered what Randy Ulmer said at the bowhunter convention in Phoenix and again on the Jay Scott Outdoors Podcast: he never shoots anything with shoes on. I took my boots off and what a difference that made. I couldn’t even hear myself walk.

Every three steps, I glassed through the trees. Finally, I spotted an elk about 50 yards away, but wasn’t sure if it was the bull or cow; I froze for roughly five minutes. Then, I saw a flash of antler move and I knew the bull had moved toward the sage brush draw. I knew I had to get to the edge of the tree line and see if he was still there. As I moved down the hill I spotted another elk; thankfully. her head was behind some trees and she didn’t see me.

As I reached the edge of the tree line he was still there, nervous and walking away from me. The bull then turned broadside looking back in my direction and that’s when I drew my bow, realizing I still had no shot. I proceeded to take three more steps to find an opening through a deadfall. With only one pin set at 30 yards and no time to range him, my instinct told me he was farther than 30 yards so I held my pin a quarter of the way down from his back and the arrow was gone. 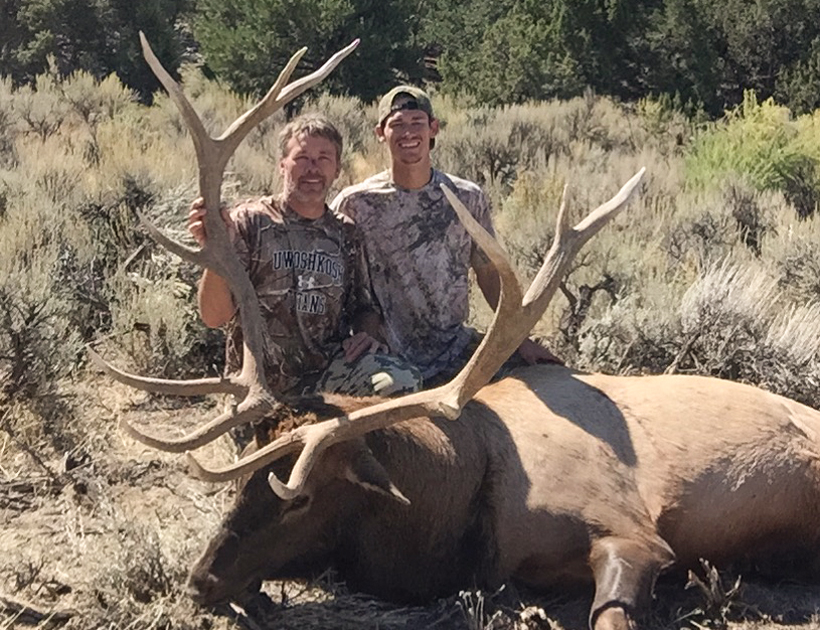 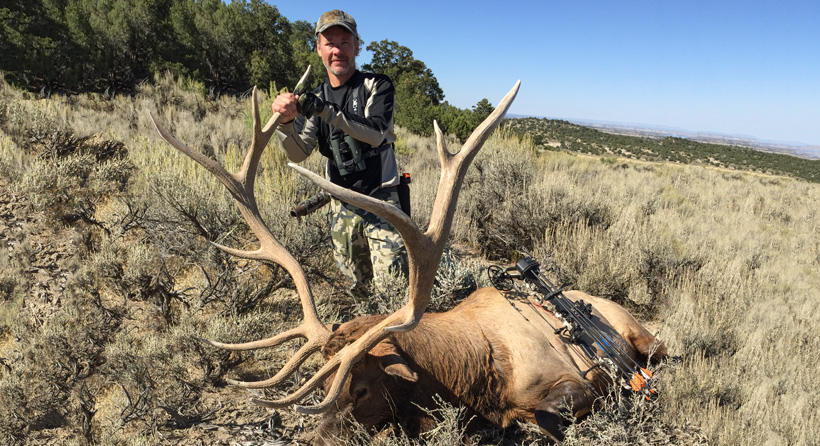 I heard the arrow hit and when the elk spun to take off I saw blood shoot out both sides as he ran about 100 yards, stopped and tipped over right there in the sage brush draw. He was dead in less than 15 seconds. With bow and arms raised in the air I yelled with excitement and, then, realizing what I had just done, fell to my knees and cried. 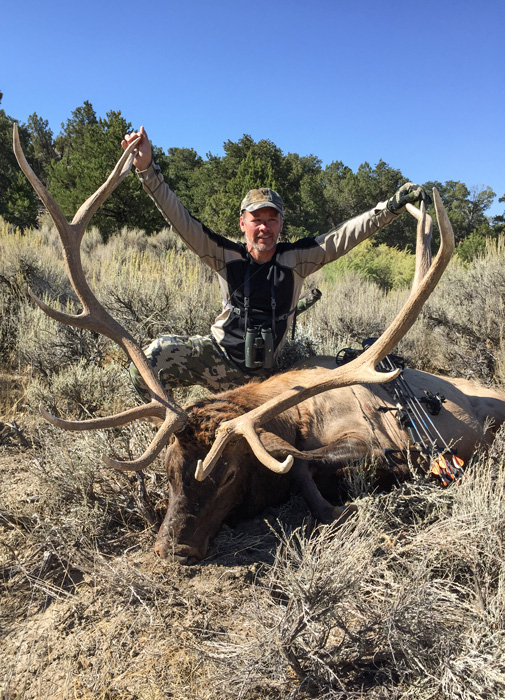 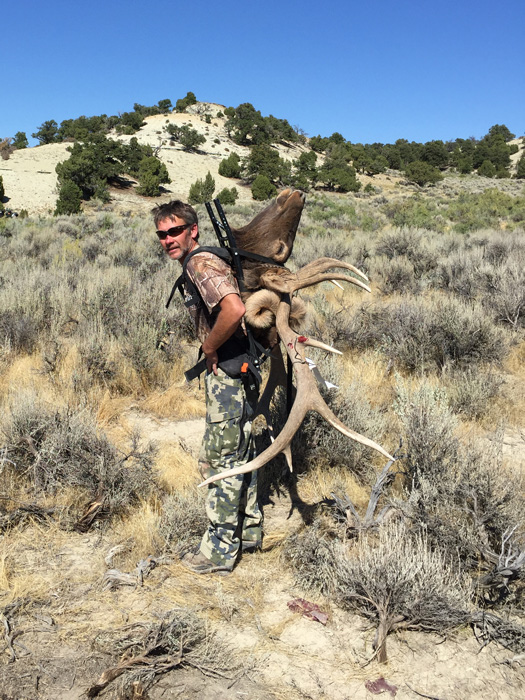 Before we could get the elk off the mountain, we had to pack all the meat and the rack back to our ATV. 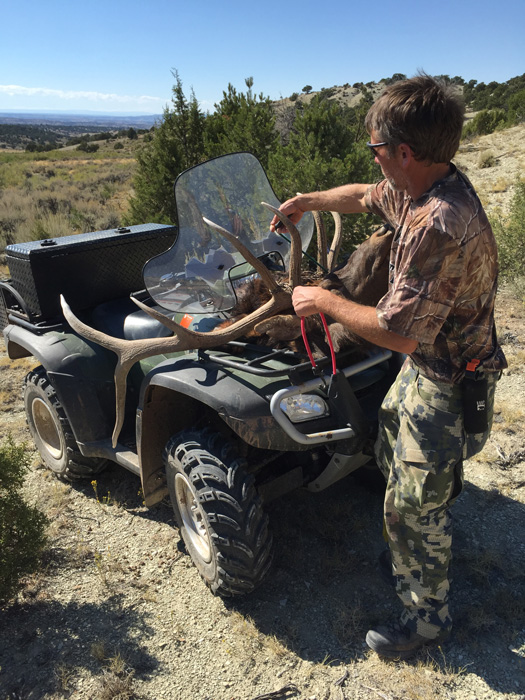 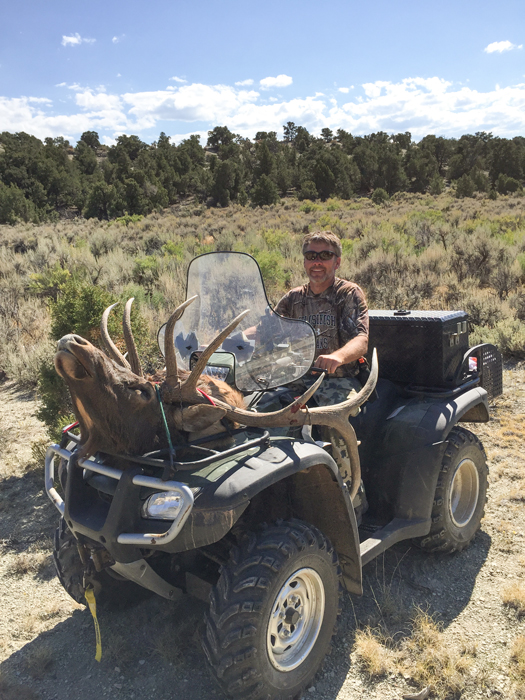 We celebrated and then got to work. We had the bull back to the locker plant in Vernal, UT that afternoon.

It was a 14 day grind. We hunted hard every day and never gave up. To have it end that way with my son watching from across that draw as I made a long stalk and put a perfect double lung shot on that bull. It was a dream come true and something I will never forget. 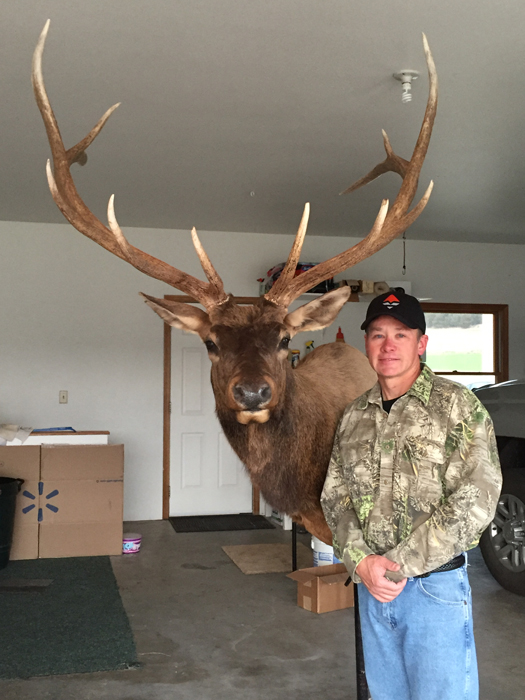 Being a part-time taxidermist, I was able to get busy right away on my elk and had him ready for the wall for me to enjoy for years to come.

Somewhere under a tree about three draws south of Indian Ridge Road is a Garmin Montana 600 with a Utah chip in it. If you read this and find it I would love to hear from you. You never know, stay positive.