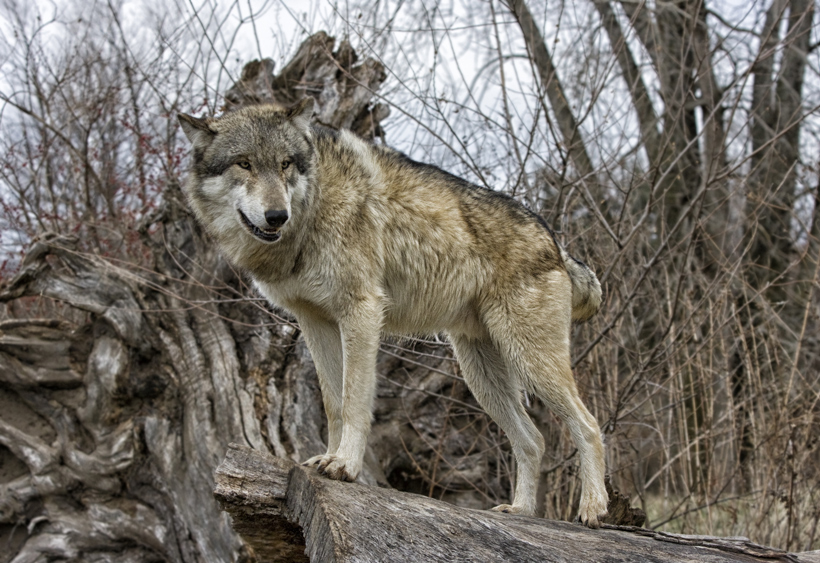 A DNA test has confirmed that the animal seen roaming Arizona, just north of the Grand Canyon, is in fact a gray wolf that originated from the northern Rockies.

The wolf had been repeatedly spotted and photographed near the north rim of the Grand Canyon since early October. In order to verify that the creature was indeed a wolf, the U.S. Fish and Wildlife Service (FWS) collected a sample of the animal’s feces to run a DNA test.

The sample was sent to the University of Idaho’s Laboratory for Ecological, Evolutionary and Conservation Genetics. The results proved that the animal is a female gray wolf from the northern Rocky Mountains population, meaning that it traveled more than 450 miles to get to northern Arizona.

The news has sent conservationists reeling, giving those fighting to bring wolves back to the American landscape a welcome boost of encouragement. With protection and tolerance, conservationists believe, wolves will be able to regain their footing in many of the places they were driven out of nearly a century ago. This wolf is a perfect example of how it works.

As wolves establish packs in places like Yellowstone, lone wolves will set off in search of uninhabited territories with the hope of establishing their own pack.

“Wolves, particularly young wolves, can be quite nomadic, dispersing great distances across the landscape,” said Benjamin Tuggle, FWS director for the southwest region. “Such behavior is not unusual for juveniles as they travel to find food or another mate.”

Over the past 30 years, there have been more than 50 cases where wolves have ventured out of their core recovery areas and into uncharted habitats in Colorado, Utah, New York and Maine. In many cases, the wolves are killed. Yet in others, they have flourished. Such was the case with OR-7, the Oregon wolf who, in 2011, became the first documented wild wolf in California since the 1920s.

Gray wolves had largely disappeared in the continental United States by the early 20th century, largely due to hunting and predator-eradication campaigns. In the 1970s, however, the animals were listed under the Endangered Species Act. Federal protection and diligent conservation efforts helped bolster wolf populations substantially, and today, there are more than 5,000 gray wolves living across several states, including Michigan, Minnesota, Wisconsin, Idaho, Montana, Wyoming, Oregon and Washington.

Today, gray wolves are no longer considered endangered species in many of those aforementioned states. In fact, in some places, such as Montana, wolf-hunting seasons have been established to help control the wolf population. Yet the species still remains on the federal Endangered Species List.

Last year, the FWS put forth a controversial plan to take the gray wolf off the federal Endangered Species List. The plan is expected to be finalized in the coming weeks or months. This means that wandering wolves, such as the gray wolf in the Grand Canyon, could be shot on sight or subjected to some kind of hunting or trapping season.

Advocacy groups, such as the Defenders of Wildlife and the Center for Biological Diversity, argue that without federal protections, gray wolves would have a hard time recolonizing their former habitats in states like Arizona.

“Because gray wolves are still federally protected in the majority of the continental United States, this wolf was able to safely migrate over 450 miles through states like Colorado to seek out some of her ancestors’ most favored habitat,” Eva Sargent, director of Southwest programs for the Defenders of Wildlife, said in a statement.

“With patchwork state protection for the species at best, and overt persecution of wolves at worst, journeys like this brave wolf’s would be extremely difficult if not impossible,” Sargent continued.