Flying solo on a blacktail hunt

On the day of November 20, 2013, I was up well before the sun and full of anticipation, especially since the weather was cooperating perfectly on the opener of late muzzleloader season. I had drawn the multi-season deer tag in Washington and passed on more decent Blacktails than I should have, knowing my odds were much better in the late season on a mature buck. 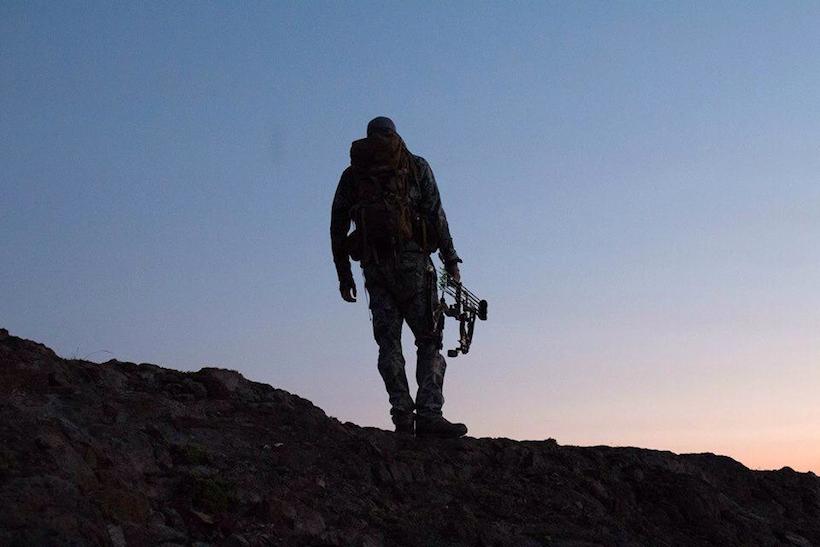 Muzzleloading was entirely new to me, as I normally hunt archery, so as soon as I drew the tag I informed my uncle, who is an avid black powder hunter, and he gave me his old .50 caliber Knight Bighorn! After my good friend cleaned up the gun, he helped me out, letting me know what loads work with my muzzleloader. 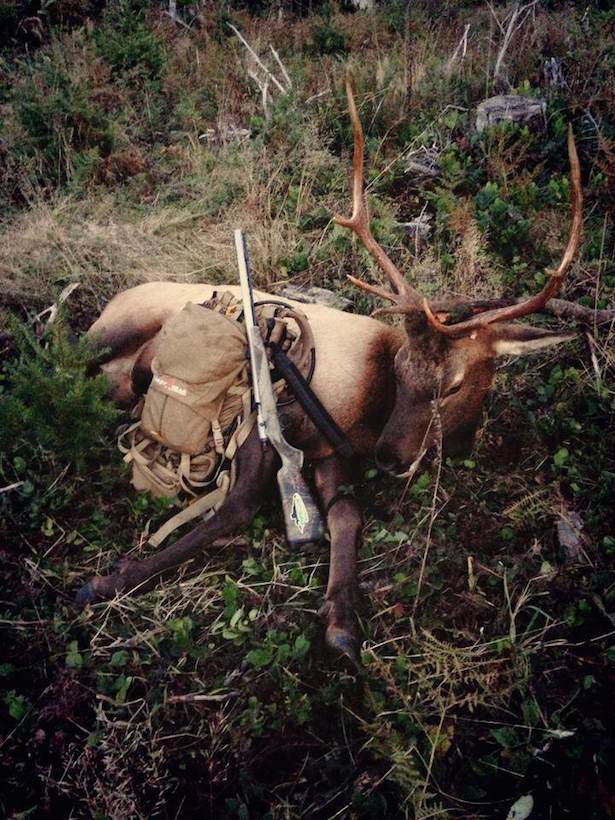 I had shot this gun twice before heading out on this hunt. The first time was at a target 50 yards away, and I put it exactly where I wanted it, the second was at this bull I killed in October, making a clean kill-shot at 40 yards away. Today I was hoping to take the third shot with it at a mature Blacktail buck.

As I loaded my truck that morning I noticed that the thermometer read in the teens, and I smiled to myself. This was going to be the day! The opener fell on a weekday, and with all of my hunting partners at work, I was in this alone. After making the 3-hour drive to a new piece of ground I recently scouted with my onXHunt map app on my iPhone, I started up the hill just as the sun was starting to rise. 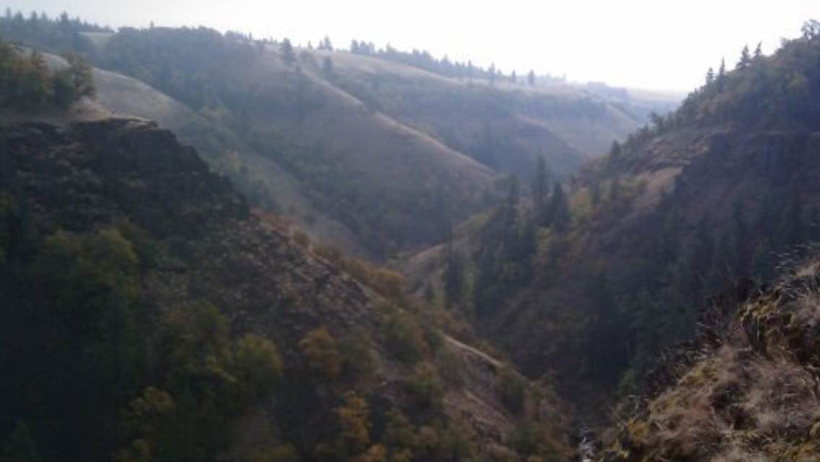 It was a perfect morning. I found deer as soon as I left the road and reached a good glassing point on top of a nob and looking into bigger ravines that I knew were going to hold deer. My Leupolds were really starting to pick up good light, and deer began to appear all over. While they were everywhere, I couldn’t spot a single buck. I counted over 30 deer until I laid eyes on the first set of head gear, forked horn. For some reason I had turned into somewhat of a trophy hunter when it came to deer, but I knew better. I could have killed that forked horn a hundred times. 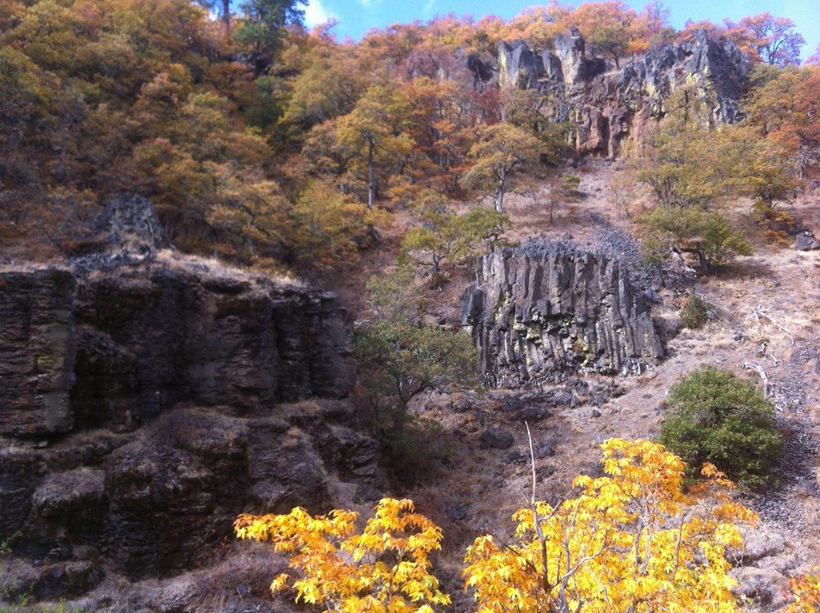 Making my way further up the hill, the terrain transitioned from grass to rock and became extremely steep. This is where I wanted to be, continuing to glass the open hillsides after looking at the area on Google Earth. Finally, after glassing the morning out, I spotted a buck in his bed that looked worthy. The thermals were working perfectly heading up the hill and the buck was bedded just right for a good stalk, below some cover I could slip through. I put myself in the adjacent ravine and used the ridgeline as cover to gain all of the ground I needed to get above him and the 30 does milling around below him. 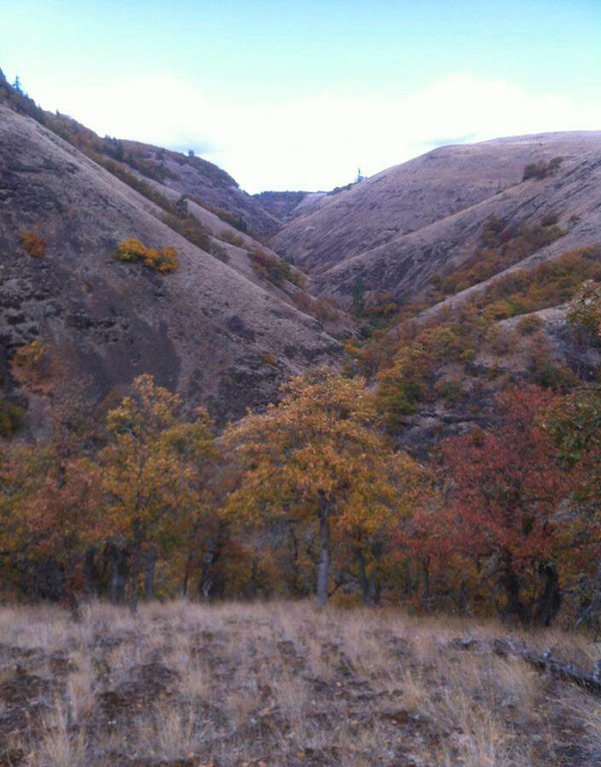 However, I made the age-old mistake of not taking my time when gaining ground out of view from the animal I’m stalking. As I headed up, I kicked myself for not being more disciplined. Luckily, the deer I spooked had no effect on the buck I was pursuing. 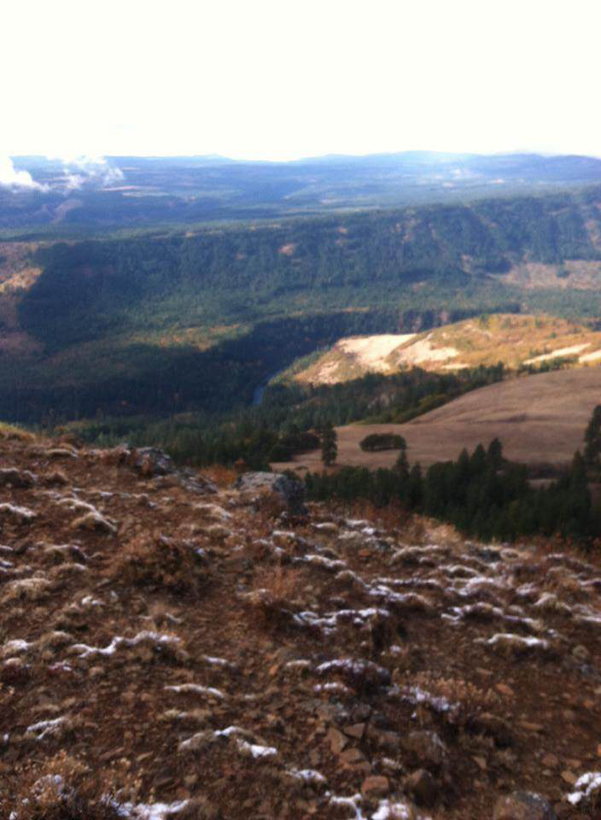 When I reached the landmark I wanted to be at, I poked my head over the ridge to take a look down onto him. I dropped my pack, bringing only my binoculars and muzzleloader. Not wanting to be skylined for these deer for very long, I put the Optifade to work and laid down on the opposite side of the ravine from the deer. I crested the ridgetop a good 200 yards above him and had about 75 yards of minimal cover I needed to get through and take the shot. 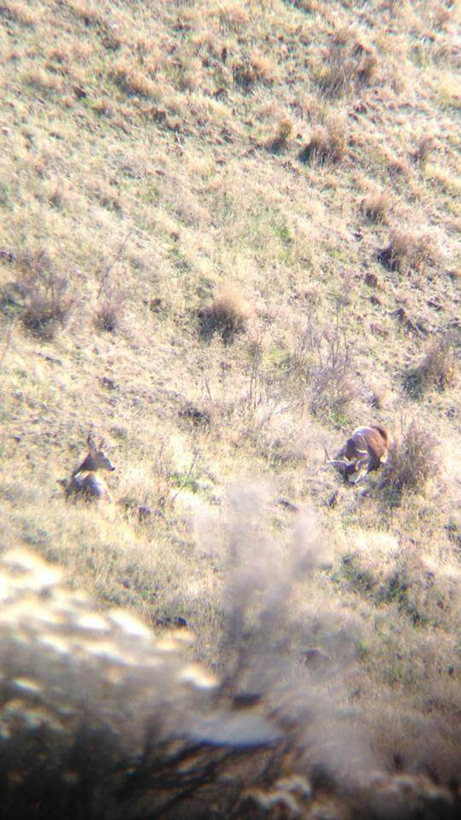 I am particularly proud of this stalk as I was almost in the wide open, and as soon as I started crawling my way down through the cover I noticed the four other bucks that were bedded with the one I had made the stalk for. One of these bucks was a massive forked horn, and his body had every sign of an old buck. I wanted him, but I had to find eyeguards on him, and he was also sleeping, so I knew it was going to be tough. This buck was out cold, sleeping! The monster fork was bedded 20 yards below the smaller 4-point I was stalking, making the shot I had planned even farther with a gun that I didn’t have much confidence in. So far, none of the bucks had noticed me inching closer and closer to them, as I was getting jabbed in the back by thorns and anything else that decided to irritate me on the ground.

I reached my last bit of cover before I broke into the complete wide open, where I knew I would be busted. This is where I was going to have to shoot from. Rolling over from my back to a prone position, I laid my glasses on the giant fork and glassed. I couldn’t put an eyeguard on him to save my life. I decided I was going to sit him out until he got up to get a better look. After sitting on him for nearly an hour, he got up, and his eye guards were plain as day! I remember reaching down for my rangefinder and realizing I had left it in my pack, and qucikly felt that this was it — now or never. I figured he was 130 yards straight downhill, which I knew the gun was capable of, but I was still nervous. 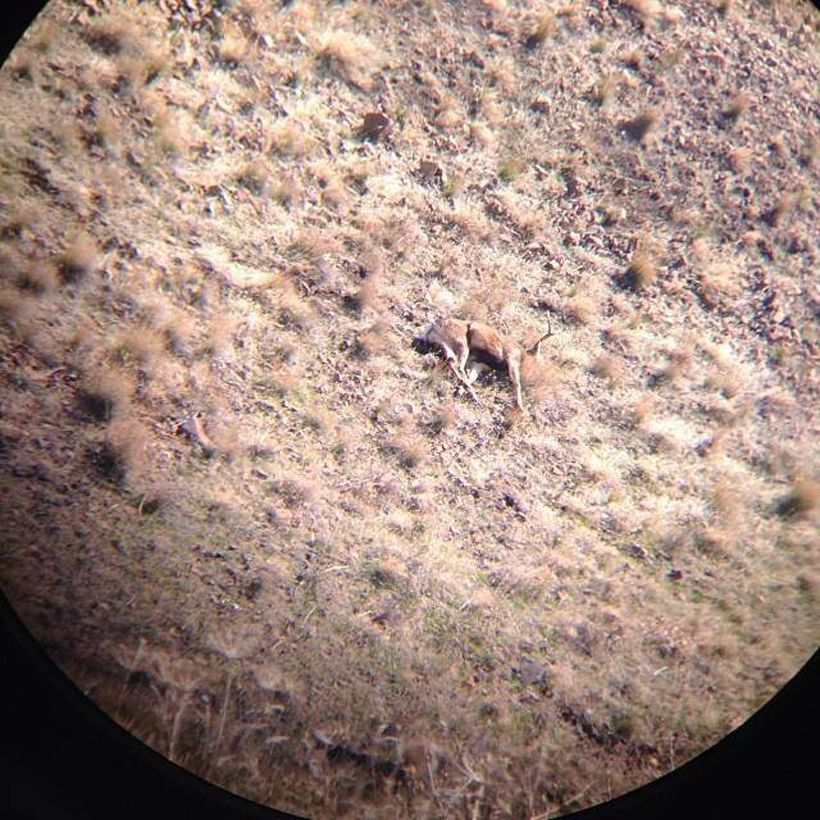 As I pulled my fiber optic open sights on him, my center bead covered his entire body, so I let down and let him get perfectly broadside. I pulled back up on him, clicked off my safety, covered his body and let down just enough to see mid shoulder over the top of my bead. My smoke pole barked, and my giant buck started tumbling down the hill. I was beyond excited to get down to him and take it all in. I literally ran back up the hill to get my pack and noticed most of the deer milling around. They didn’t seem too interested in the fact I was there until I started making my way down to where my buck landed. The descent down to where he laid was trickier and took a lot longer to get down to him than I had anticipated. 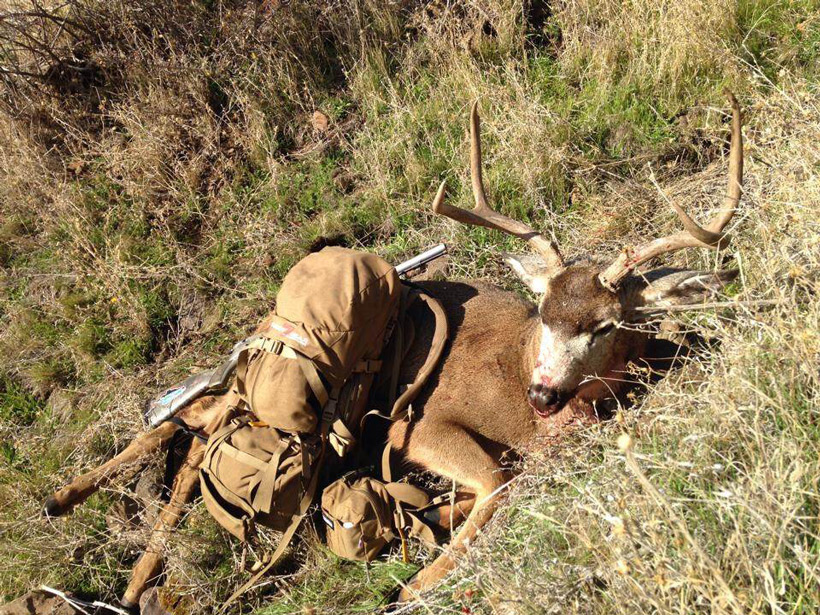 Coming up on this buck, I experienced a very mixed bag of emotions. Three weeks prior, I had lost my father-in-law, who lived to hunt, in a plane crash flying into his mule deer location in Idaho. I would be lying to you if I said I didn’t sit down right next to this buck and start sobbing uncontrollably thinking about it. I always believe it helps the healing process to let it out sometimes. 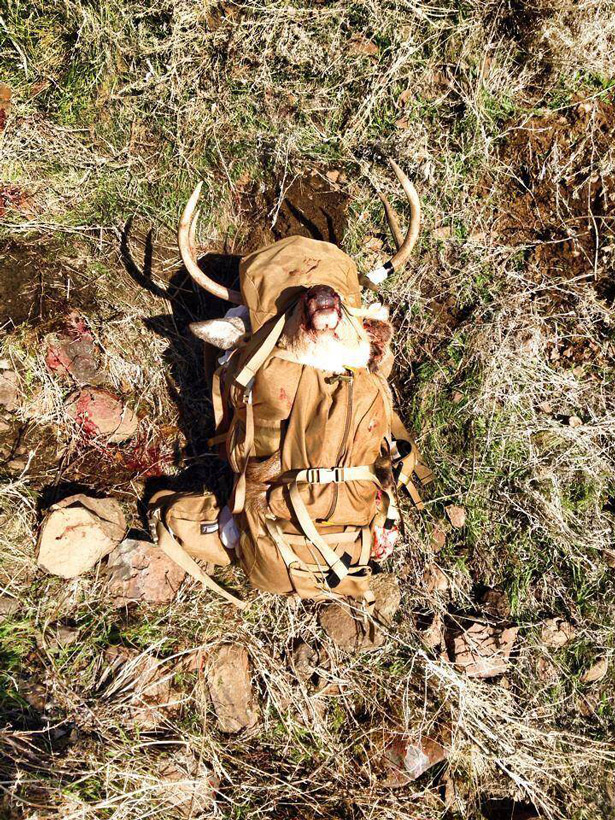 Afterward, I felt overwhelmed with joy knowing I took a mature buck for the first time, by myself. Having only my phone to take pictures, I took plenty of photos with my buck, since I was somewhat limited as to what kind of shots I could get. After a couple of celebration phone calls, I started in on boning this deer, knowing I couldn’t drag it the three miles back to the truck. 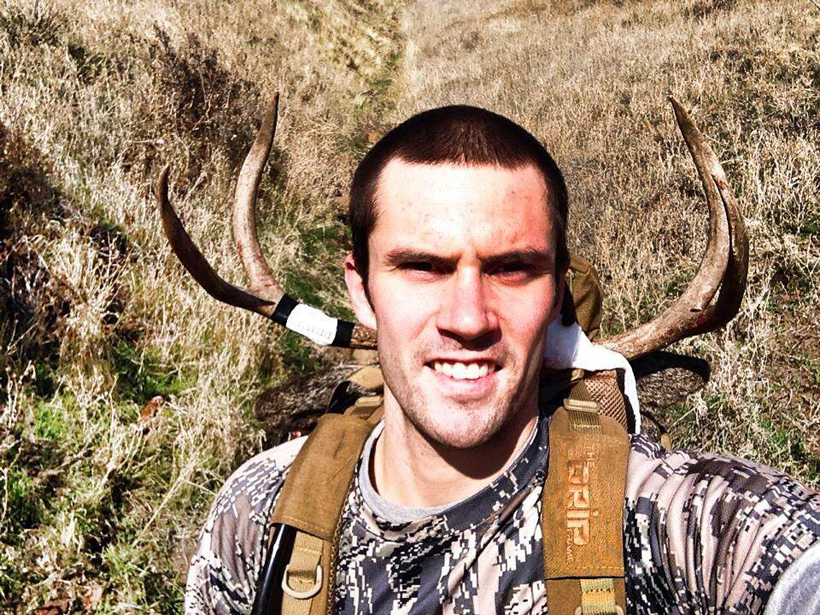 It was so steep I had to set rocks up to hold my buck in place to work on him. I loaded the entire deer, boned out, onto my Blacks Creek pack and headed back up the hill to get around the rocky chute that I did not want to navigate with such a heavy load. 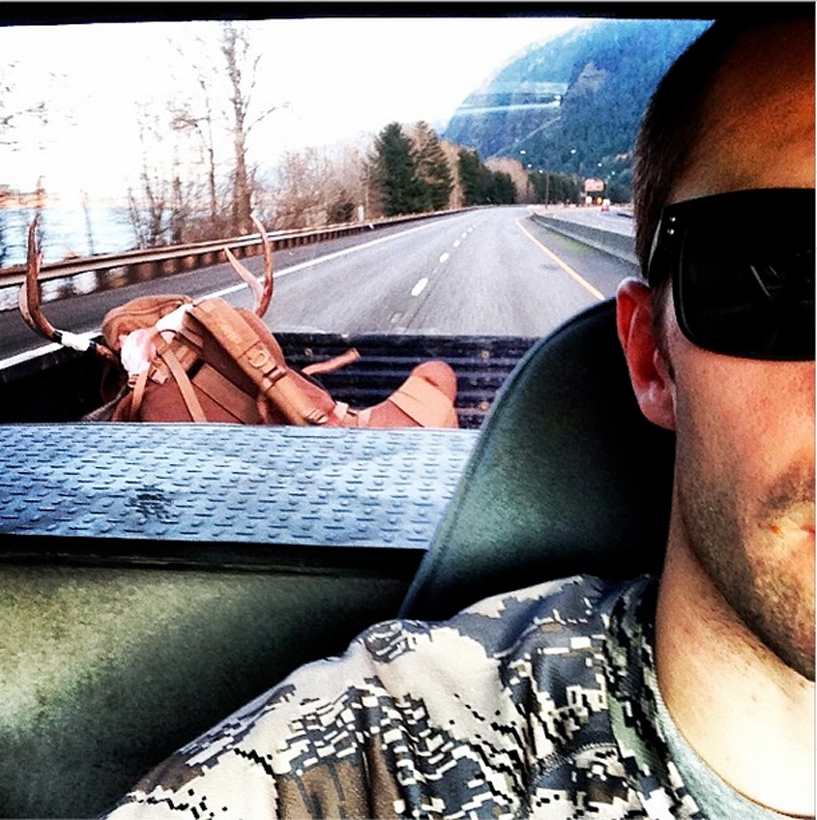 I was on the phone the entire way out calling my wife and friends, telling them about my buck. I got him all the way down the hill to my truck and dropped my pack onto my tailgate. I love the feeling of dropping a heavy pack, since it usually means you were successful!

My big fork ended up being 23” wide and is the oldest deer I have taken. I will always try to outdo myself by shooting a bigger one, but this will always be special to me, knowing that it was my first solo buck in an area that I found on my own.