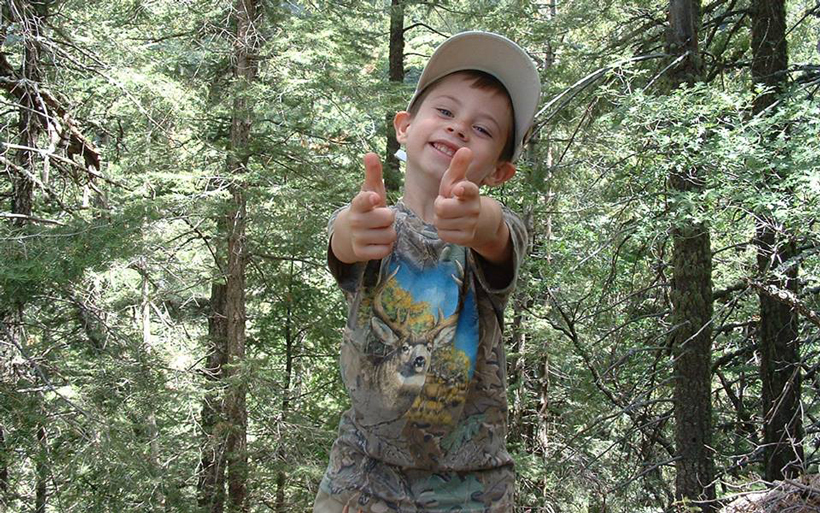 My son, Colton Choate, became a hunter at a young age and was eager to get into the woods. As you can tell from his ear-to-ear smile, while scouting for Coues whitetail in Southern Arizona. From the time he could walk, he wanted nothing more than to go with me on my scouting and hunting adventures. Together, we hunted antlers, deer, elk and anything else that was in season. Throughout the years, he has followed in my footsteps, learning from me and teaching me as well. 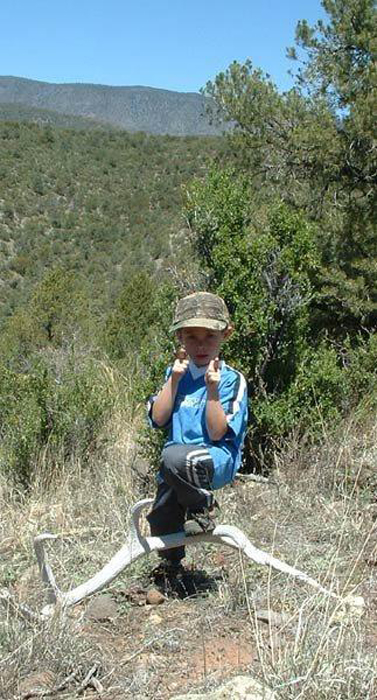 When he was just 4 years old, Colton ventured with me several miles into the Blue Primitive Area in Eastern Arizona in search of elk antlers. He never complained once about the steep, rugged terrain or the cat claw that was taller than he was. 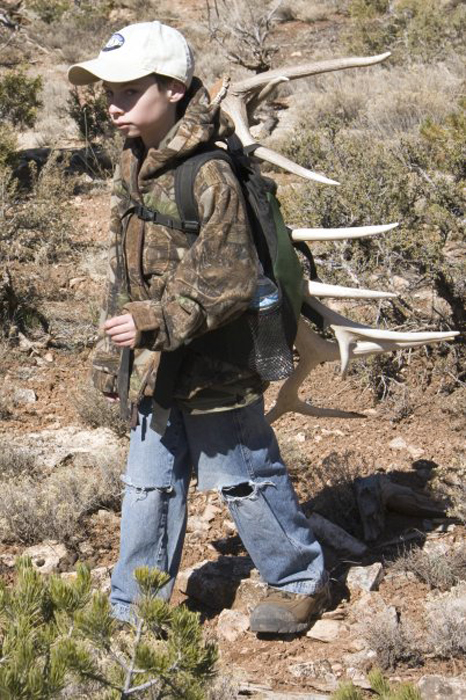 By the time he was 8 or 9 years old, Colton was already quite the shed hunter, going with me every weekend in the spring. 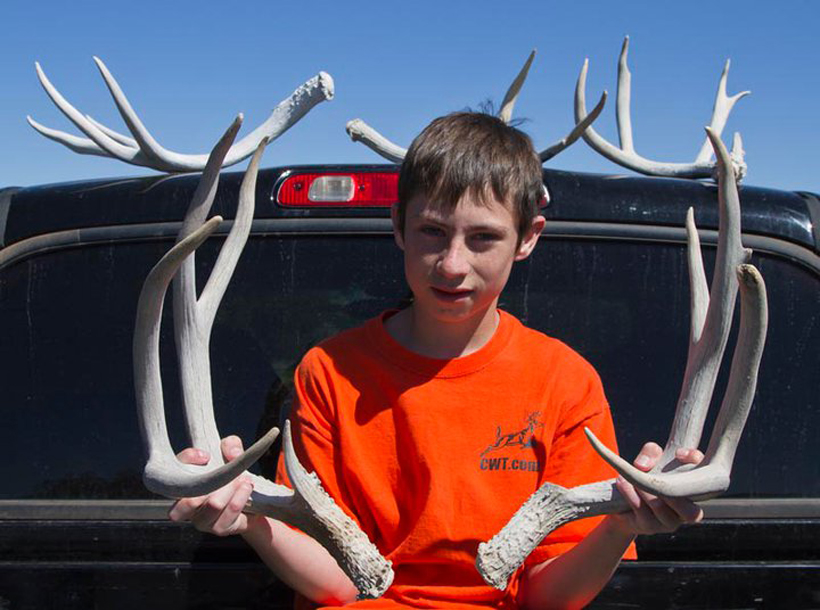 Before he was a teenager, Colton found an 81” mule deer antler (the other side was broken and scored in the 70s, which is still his largest to date). 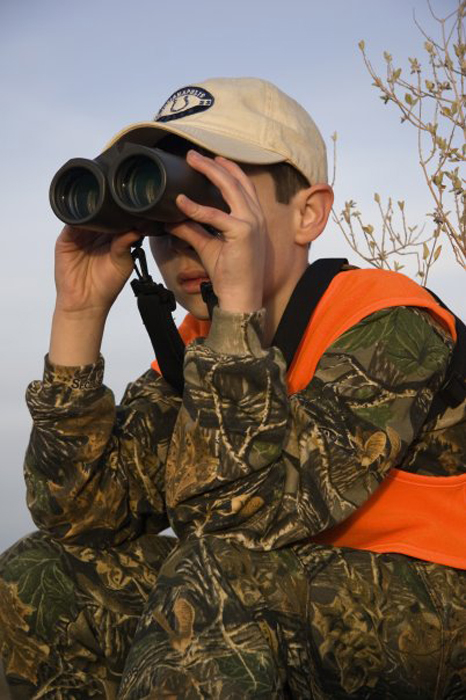 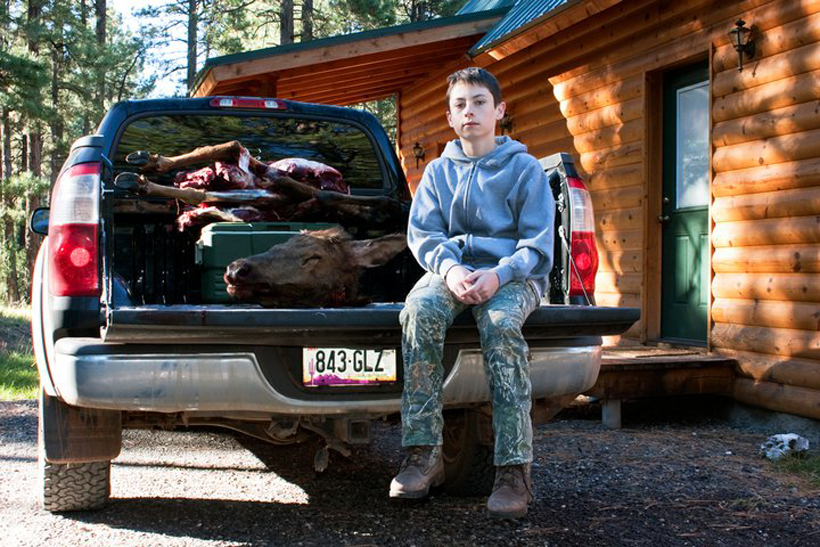 While hunting with his uncle and grandfather, Colton harvested his first big game animal, a cow elk. 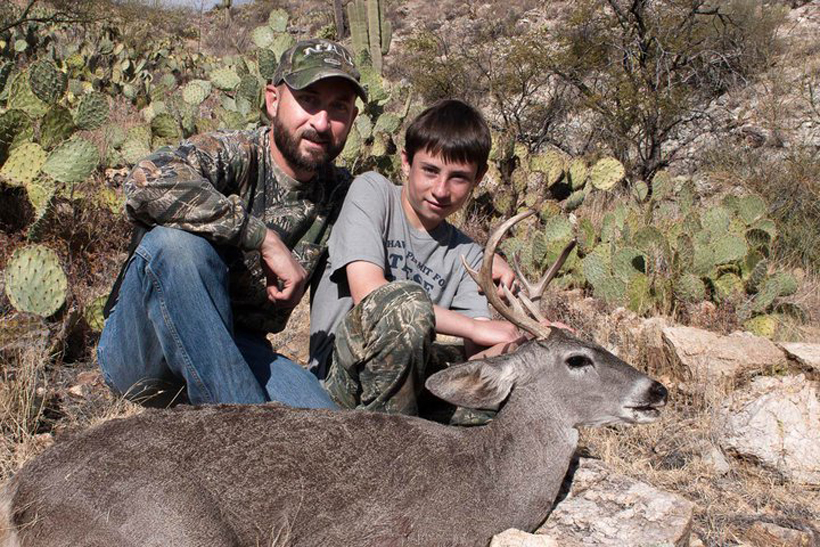 A year later was when Colton took his first deer, a nice little Coues whitetail buck. He took the buck from an outcropping of rocks where I had missed a buck a few years prior. 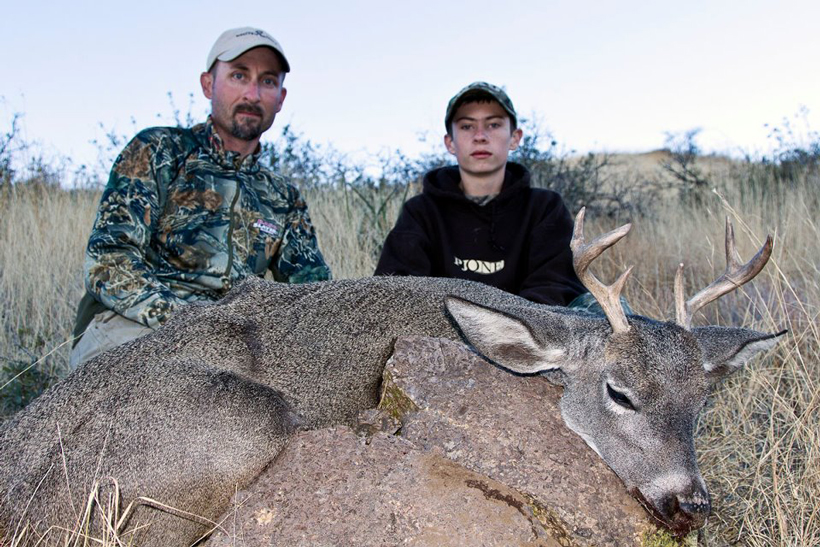 It wasn't long before Colton was hunting for his second Coues buck in Arizona’s Unit 31, and his passion for hunting Coues whitetail — like me — was beginning to show.

On his first bull elk hunt, fog rolled in during the first four days of the hunt. With anticipation, we waited for the fog to lift, but it never did. We hunted as much as we could in the poor conditions, until Colton had to return to school. 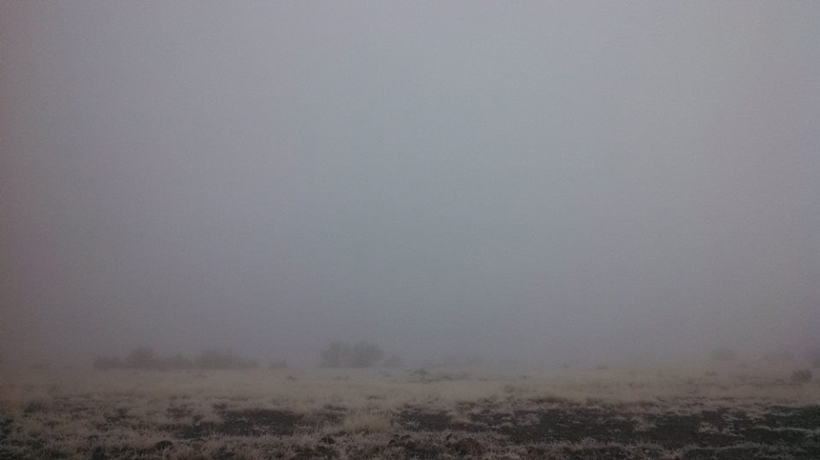 The fog made it impossible to glass for elk, let alone see 100 feet in front of us! 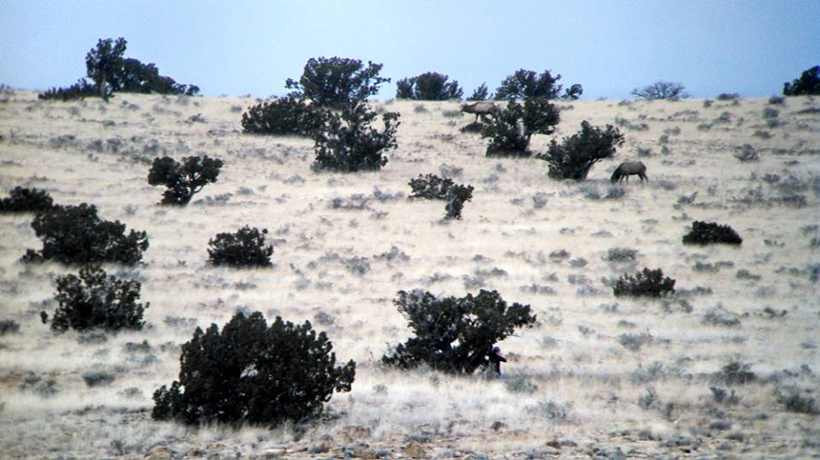 One afternoon, the fog lifted just enough for us to make a stalk on an elk herd with several spike bulls. Colton closed the distance to 150 yards on his own, while I waited from a distance, behind the binos. However, he elected to pass on the opportunity because he felt the bulls were sky-lined, and he did not want to chance the shot, especially in the foggy conditions.

Finally, the fog lifted and I allowed Colton to miss school on the last day of the hunt for one more chance. The change in weather was both a blessing and a metaphoric curtain pull on what would turn out to be his dream season. That morning, Colton and I glassed a herd of elk in the distance. We moved in on the herd, which included several spike bulls. While stalking for a shot at one of the spikes, we spotted a mature, branched-antlered bull and quickly changed our course. 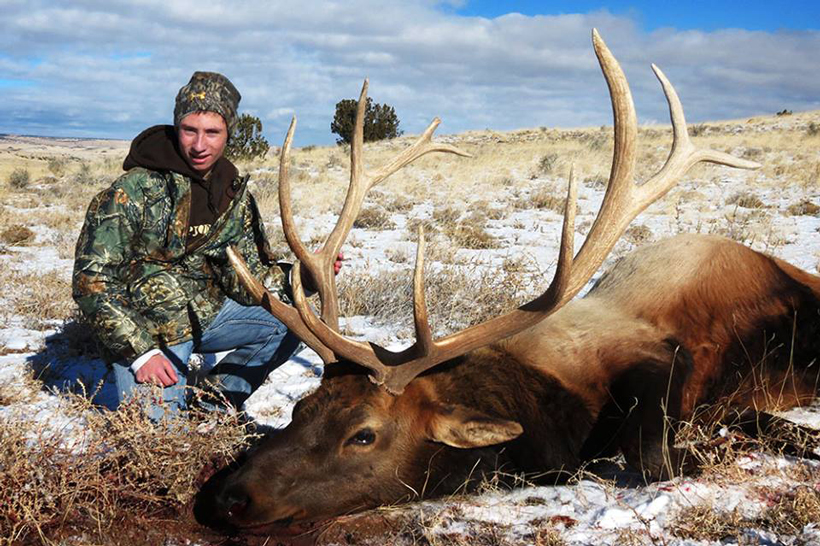 Colton made a 500-yard shot and a finishing off-hand, running shot at 100-yards to harvest his first bull, which gross scored approximately 330”.

A Turkey on his own

Colton has a set of good friends, and a “second family” that he spends a lot of time with. The Boggess family has always included Colton as one of their own, and they too are die hard hunters. During the spring, Colton, and his best friend, Bennett Boggess, decided to hunt turkeys on their own during the youth season. 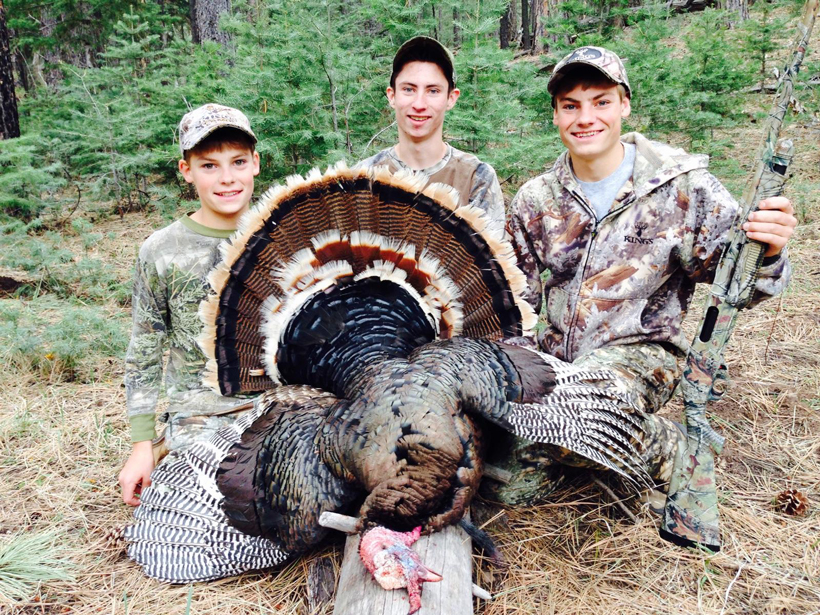 Hunting with his good friends, Davis (left) and Bennett (right) Boggess, the trio called in a 8” bearded Tom into shotgun range and Colton took his first bird. 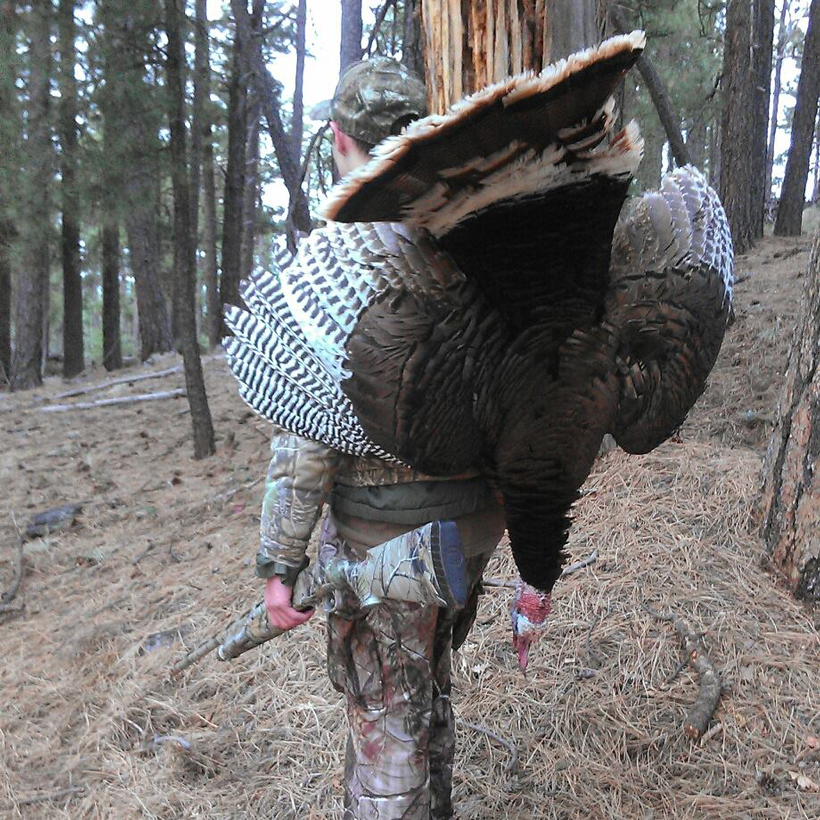 The proud hunter shoulders his harvest and heads to the truck.

While scouting for deer, Colton and I spotted a big black bear one afternoon. Bear season was open, but we had intentionally left our rifles home, so that we did not get distracted from the task at hand, finding a shooter buck. 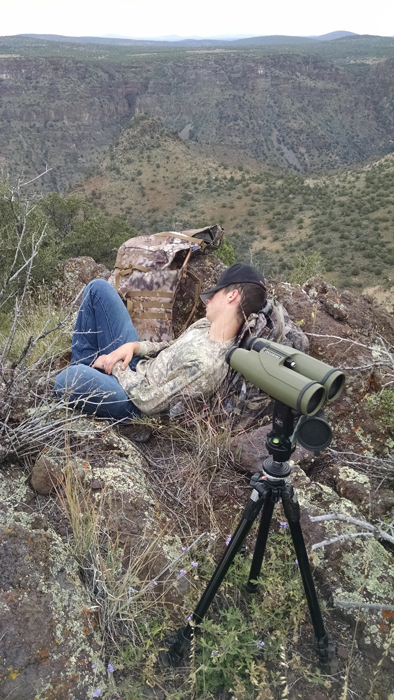 Scouting for Coues whitetail can tire a person out, so Colton takes a much-needed nap during the mid-day hours. 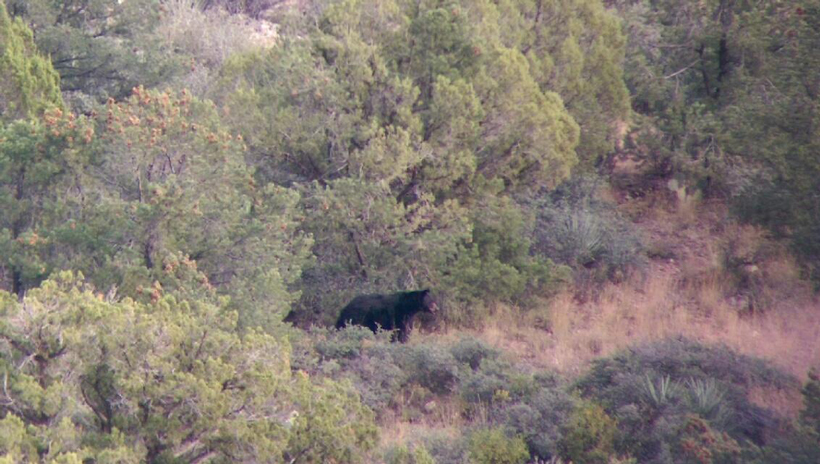 Unexpectedly, we glassed up a big black bear, while looking for a good Coues buck. 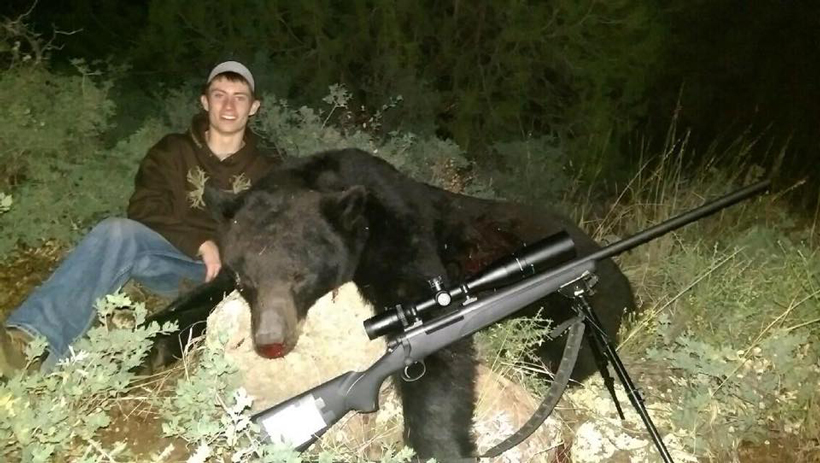 Colton and his friend, Hunter Weems, went back a couple of days later to find the big bear. After glassing all afternoon, they finally found the boar just a few hundred yards from where we had seen it earlier that week. After a couple of well-placed shots, Colton had taken his first bear, and third big game animal of the year. 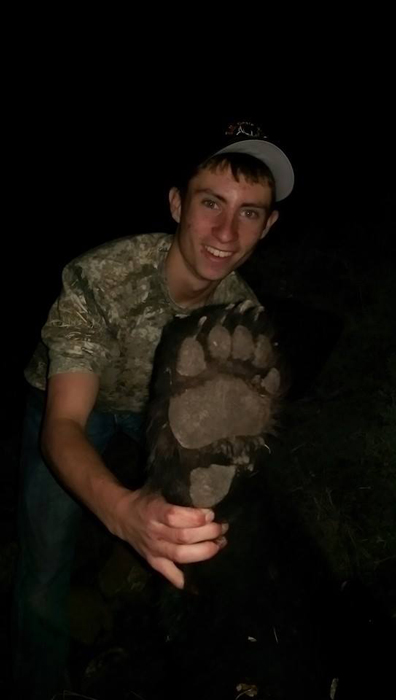 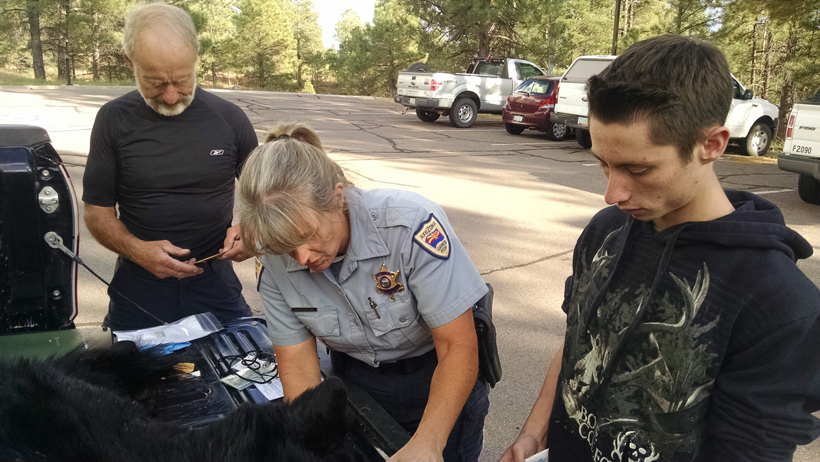 Colton getting his black bear checked by the Arizona Game and Fish Department.

Unfortunately, Colton was not successful in the deer draw, but I was willing to sign down my tag to him (a provision Arizona has for tag holders wishing to give their tag to a child or grandchild). So, a week later, Colton and I returned to hunt deer. In the early hours of the morning, we packed in 1 mile and sat down to glass. As the first hint of light shown over the horizon, Colton spotted two bucks. Even at the great distance, we could tell one of the bucks was a good one, so the stalk began. 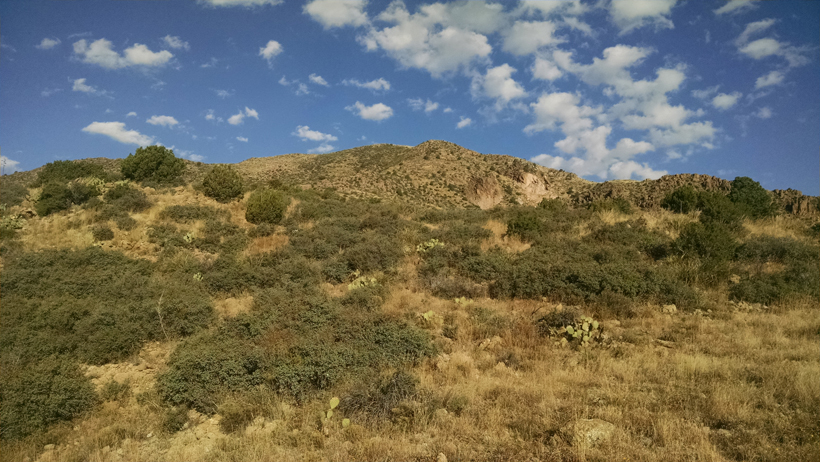 Colton and I stalked another ¾-mile in, and then gained 1,200 feet in elevation to work in for a shot. We worked in to 150 yards, but could not find where the bucks were bedded. 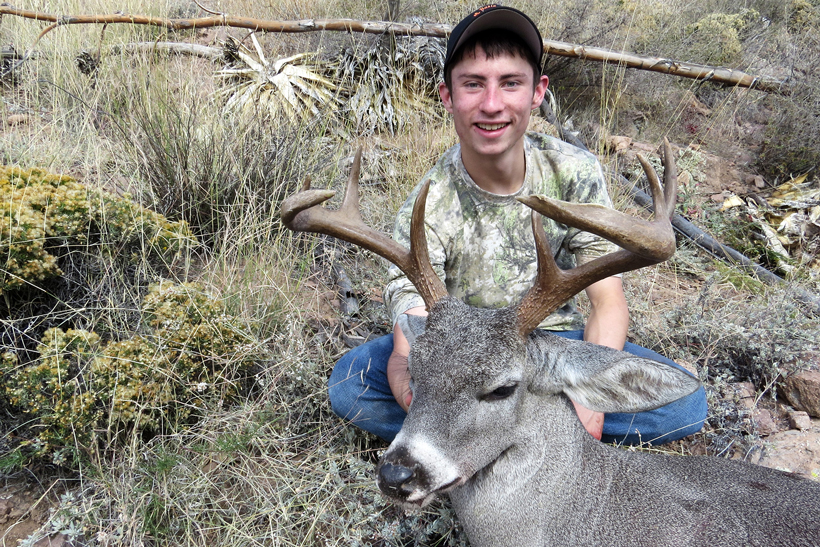 After a few minutes, I stood up and walked to our left. When I did, the bucks came out like a rocket, straight up the hill. I whistled and stopped the bucks at about 200 yards, and Colton made the shot.

While driving home from Colton’s deer hunt, his accomplishment dawned on me. While I hunted as a child — beginning as early as he did — I did not harvest my first big game animal until I was 19. Colton was just 17 now, and in just 10 months, Colton harvested a 300”+ bull elk, an 8” bearded turkey, a giant bear by anyone’s standards and a milestone, a 100” Coues whitetail. I have to say, I was an exceptionally proud father, and not just because of Colton’s accomplishment, but because of the path he took to get there too. 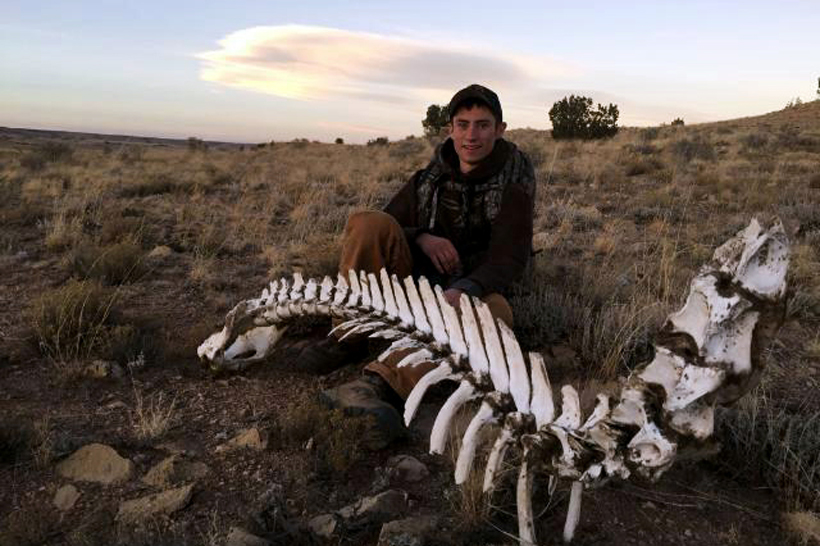 A year after taking his first bull elk, Colton was hunting elk again — this time helping a few others in the same unit where he had taken his bull. One afternoon, Colton returned to the location where he took his bull. All that was left were a few bones, and a bunch of memories worth reminiscing over.

Bradley, start with AZGFD's website, but also consider goHUNT's Insider too. Whatever, you decide, bring some good "glass" and have fun. I have found Jan. 3-7 to be best for the Coues rut, but this can depend on weather--like it did this year.

Congrats Colton, sure looks like you had awesome training, been steered in the right direction and know what it takes to become a hunter.Quite a successful one at that. Well done!

Congrats to colton. Im considering coming out to AZ for the late archery deer season for coues. Any idea where to start? Helpful hints?