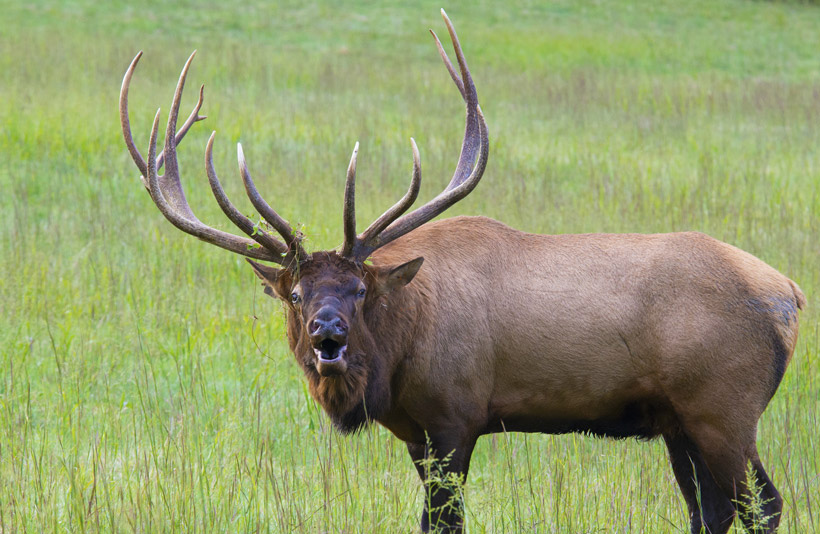 Before European settlement, there were an estimated ten million elk roaming the North American continent. The species had the largest range of any deer species, spreading throughout every part of the continent except for the Great Basin Desert and the Southern coastal plains. But with unregulated hunting, grazing competition from domestic livestock, and habitat destruction by urbanization and westward expansion, American elk populations dwindled to less than 100,000 by the early 1890s.

Fortunately, wildlife management efforts throughout the 20th century helped the elk populations to rebound. By 1984, there were an estimated 715,000 elk in North America. And by 2009, elk numbers grew to 1,031,000. Though today’s elk population is still about one-tenth of the historic level, the numbers have stabilized and, in some areas, have even grown.

At one time, elk were thinly dispersed throughout Arizona from the White and Blue mountains westward along the Mogollon Rim to near the San Francisco Peaks. These native elk were eliminated before the 20th century. In 1913, 83 elk were translocated from Yellow National Park into Cabin Draw near Chevelon Creek. Two other translocations of elk followed in the 1920s. These transplants were great successes, enabling Arizona’s elk population to grow to approximately 30,000 to 35,000 post-hunt adults.

Colorado is home to the largest elk population in the world. Currently, the majority of elk herds in the state are either at or near target levels. Though it is important to recognize that over the last two decades, many elk herds in Colorado have changed their habits due to the continuing destruction of habitat through development and the increasing disturbance by humans in their natural habitats. Many elk herds have moved to winter ranges on private lands early in the season. The shift from public to private lands during the hunting season may be adding to below objective harvest, ultimately allowing elk numbers to increase above target levels.

While elk numbers are considerably down in some areas that have particularly high wolf densities, like the upper Gallatin, Blackfoot Valley and Gardiner regions, elk numbers remain at or above target levels in 81% of the state’s hunting districts. Elk are especially thriving in northeastern and north-central Montana.

The Nevada Department of Wildlife issued a record number of elk tags this season. The decision was made in response to a rapid increase in the statewide elk population. In the last decade alone, elk numbers have more than doubled. Today’s population is estimated to be 17,500.

Based upon the most recent surveys, the New Mexico Department of Game and Fish estimate that there are approximately 70,000 elk in the state. Elk typically occupy the mountainous regions of New Mexico. Primary elk habitats include the north-central portion of the state along the Sangre de Cristo and Jemez Mountain ranges, the southwest region, and the southcentral portion of the State along the Sacramento Mountains.

Over the last 30 years, the elk population in Utah has grown substantially. From 1975 to 1990, elk numbers jumped from an estimated 18,000 to 58,000. This rapid increase was primarily due to low population levels and an abundance of available habitat. Since that time, population growth has stabilized through the use of antlerless harvest designed to maintain populations at established target levels as well as reduce populations in regions with poor habitat conditions. The current statewide population is estimated to be around 68,000 animals, making elk the second most abundant big game species in the state, just behind mule deer.

Interested in elk, but like mule deer more? Read the first in this series, Mule deer numbers across 6 states.