Elk lessons from the Jarbidge 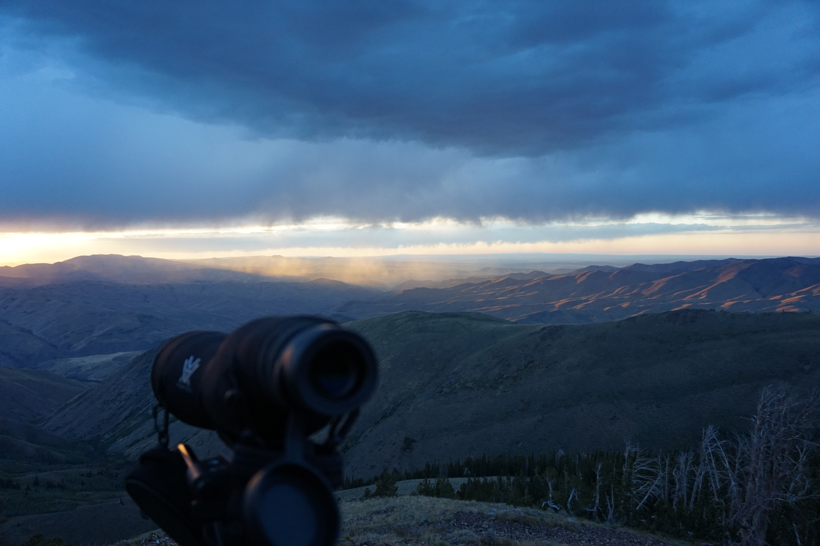 “A journey of a million miles begins with a single step.” This is a quote that all hunters should know well, since we know that an adventure typically begins in the quiet solitude of our homes. Or maybe in the hustle and bustle of our prospective offices as we sneak in our applications in various states in hopes of drawing a coveted tag. My trip to Nevada this fall did not begin successfully, as we all cross our fingers for the draw results each spring. My trip began with disappointment. The application season of 2014 produced unsuccessful results for an elk tag in Arizona, Nevada, Utah, New Mexico and Colorado. This is where my hunt really began. 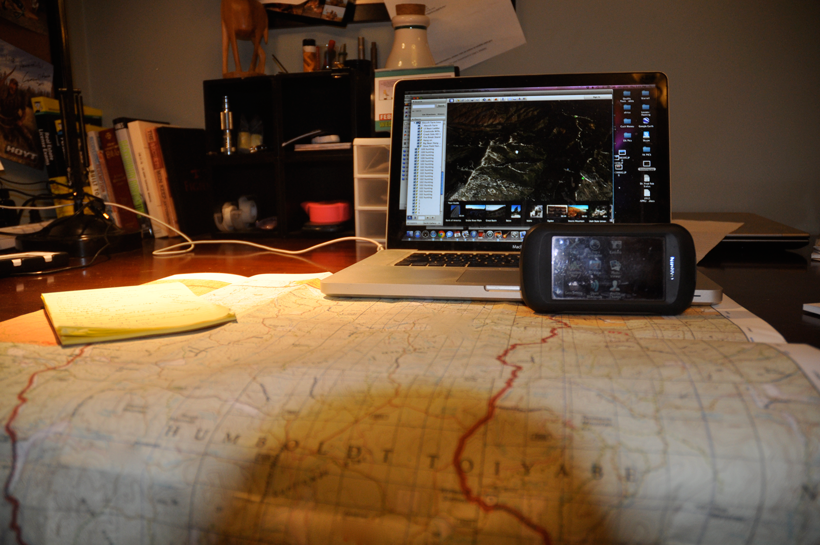 With no success in the draw, I began researching landowner tag options in New Mexico, Nevada and Colorado. As options began to pile up, I narrowed my search based on the following criteria:

Trophy quality: I selected units that I felt I had a good chance at a 350” bull.
Effective glassing area: Glassing is my preferred hunting method. I sorted through units looking at the vegetation throughout the mountainsides and elevation levels to determine how easy or difficult glassing might be for each unit.
Season dates and flexibility: I opted for units that offered good pre rut dates. I always threw out any seasons that would not allow at least 10 days of hunting. Learning new country takes time, and sometimes on a 5-day hunt there simply is not enough time to locate, pattern and harvest a quality animal.
Price: I do not list this priority first since there are typically some deals out there to be found. I try to be open to as many options as possible. Once I looked at all available tags I looked at success rates/size versus price.
Access: Being an Eastern hunter, access is always a major concern for me. I took into account my limited backpacking experience when finalizing my unit choice. I like units that offer some road access since it is much easier to cover multiple areas in the unit each day.

New Mexico: New Mexico offers a multitude of excellent landowner tag-sponsored, elk- hunting opportunities. Vouchers in New Mexico are sold in two forms: Ranch-only tags (valid only on the ranch in which they are assigned), and unit-wide tags (offer access to public land in the unit and any other private ranch that receives unit-wide vouchers). There are some great tags in New Mexico. I typically look for tags in the Gila (Units 15, any of the 16s (16A, 16B, 16C, 16D, 16E), 17, 34, or 36). Some ranch-only tags can be found in these units, along with some of the northern New Mexico units.

Nevada: Nevada is the Wild West of Western landowner vouchers. Expect high tag prices and highly competitive markets. Why? Nevada has great elk hunting opportunities across the state. Some deals can be found, but do not expect many. Nevada is experiencing a spike in overall number of elk tags. Landowner tag pricing may not accurately reflect these increases in tag quotas (which has lowered quality in some units). Landowner tag numbers in Nevada are also based on yearly counts that are subject to change each year depending on weather conditions, etc. I generally like to look for tags in the northern section of the state. Units 075, 076, 077, 078, 079, 081 and 061 through 071. There are a lot of vouchers issued in these units and extremely high elk densities with good quality bulls. Vouchers in the premier units (111-115 and 221) are extremely expensive and hard to come by!

Colorado: Colorado’s landowner tag system is currently going through some changes. The methods in which tags can be legally transferred are changing. Third party tag brokering (buying a tag from a third party not directly from the landowner) is being regulated more and more. In the past, some excellent options have been available for elk across the state. With these current changes, it is likely that prices are going to go up and tags will become harder to find. That being said, there are some great elk opportunities in Colorado. In my opinion, the premium units in Colorado are overpriced for the bulls available. With that being said, Colorado offers some excellent deals for tags that offer a lot of 300” bulls. Some good units in Colorado to check out are: 61, 40 and 76. There are a ton of good opportunity tags to be found in Colorado. 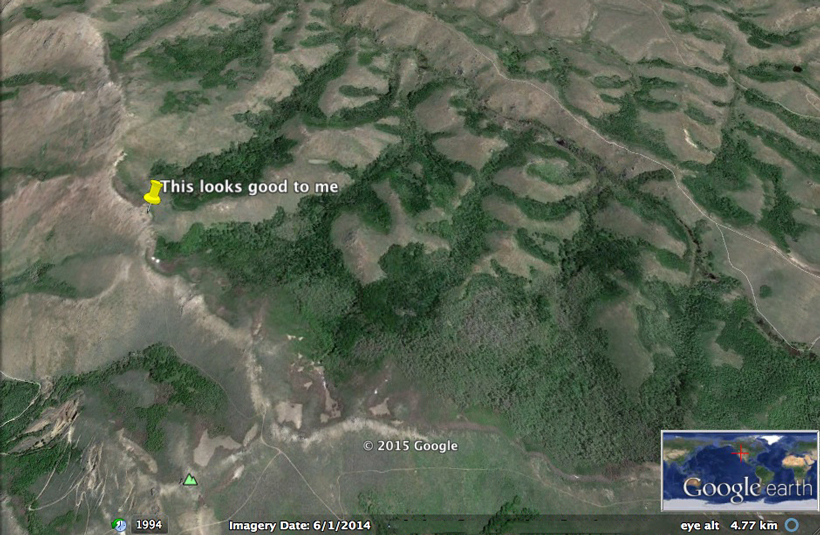 Once a unit was chosen, and a tag was purchased, I ordered maps and started my research. I got my hands on any call list of hunters that previously hunted the unit I could find and inspected every Internet forum looking for information. With this information in hand, I began putting together areas to scout when I arrived in the unit. I went as far as to plan my first four days of scouting using Google Earth and Forest Service maps to identify which areas to camp.

My dates for the hunt were September 1-17. I ended up having some luck in drawing a general season Wyoming elk tag. The Wyoming hunt was scheduled to begin September 11, which gave me 10 days to fill in Nevada. With this in mind, I made plans to arrive on August 25 (6 days before season started). 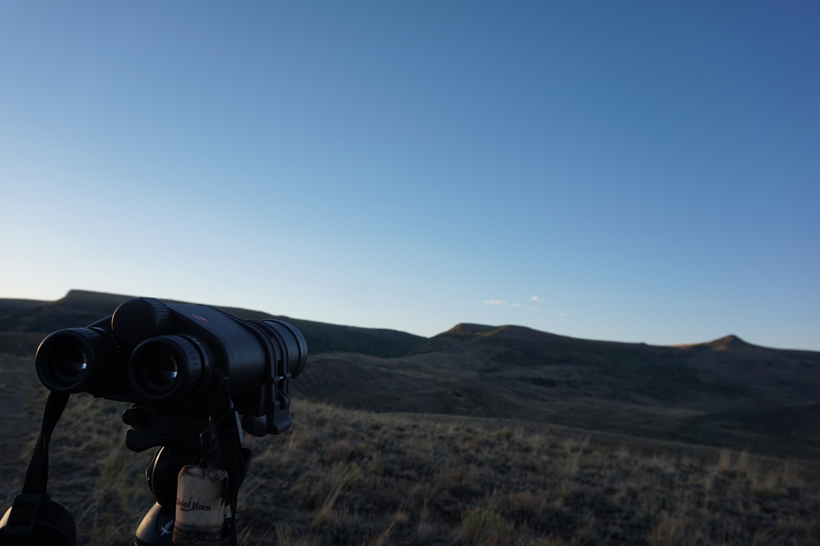 Arriving in the unit on August 25, I found that most of my research paid off. I found decent bulls very quickly. I spent the first few days of scouting based out of the small town of Jarbidge. 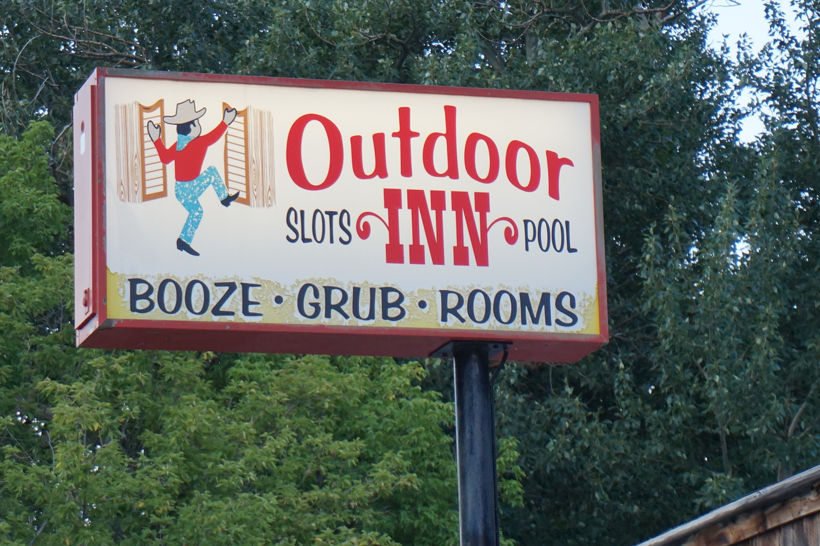 I did however find that I made a critical error in assuming I would be able to cover all areas of the unit. Poor road conditions made going from area to area slow. It quickly became apparent that I needed to pick a few centrally-located areas. 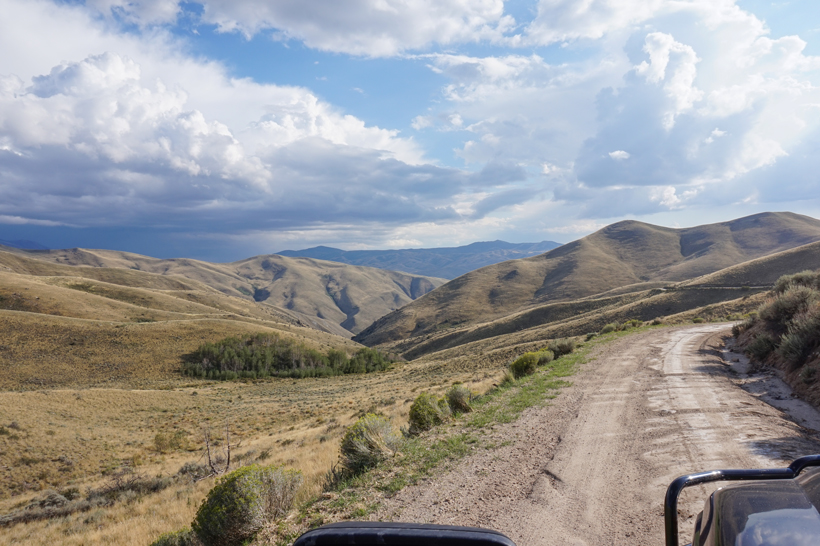 The F-250 simply was not getting to all the areas I wanted to scout and scouting on foot required considerably more time and effort. I sorted through my notes and picked three areas that appeared to be the best of the best. 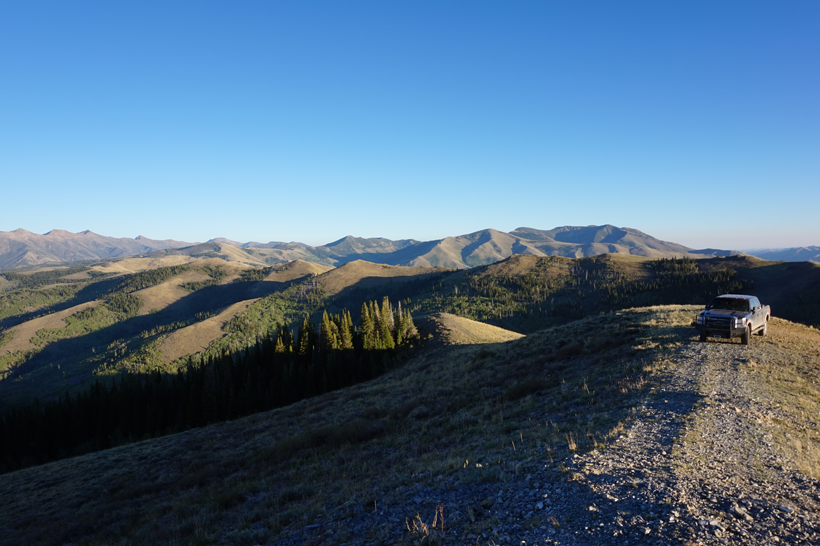 With this in mind, I would have to say that in the future I am going to pick a unit to hunt, and then a specific area to focus on. Covering an entire unit is not feasible for a guy like me that lives 1,000 miles from elk country. 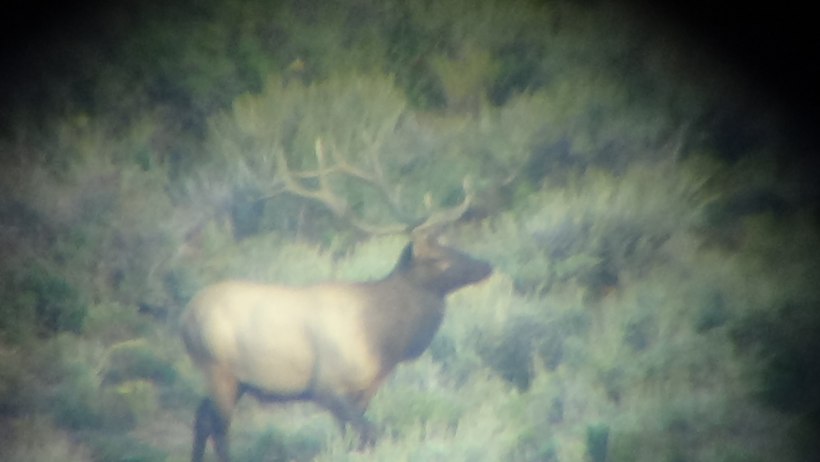 On my fourth day of scouting I found a beautiful 6x6 in a secluded canyon. He worked between three different drainages each day. All the research had paid off. 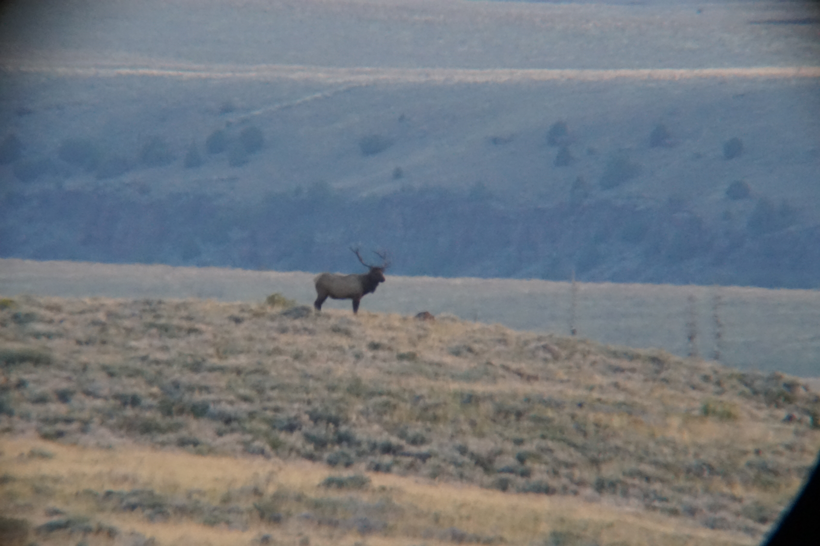 He was in the drainage my at-home research suggested would be the best. At this point, I committed to hunting him and moved camp to a location that offered easier access to the glassing points he was visible from each day. I did not even want to find a back up bull. This was my guy! 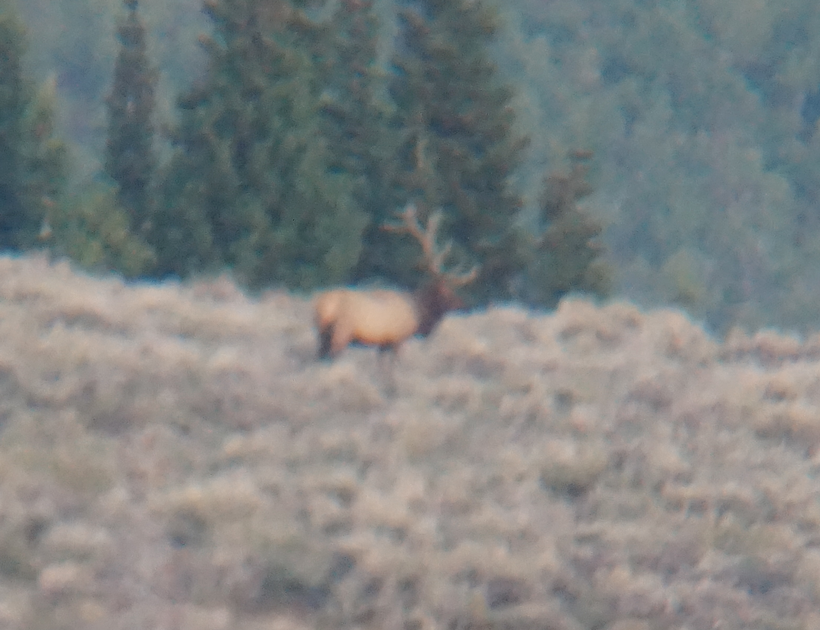 Day 1: Opening day of season arrived with a excellent weather. I watched my bull feed in a secluded canyon with 20-30 cows the night before opener. Opening morning found me slowly working toward the bulls bugle in the cover of darkness. As the sun rose, I found the bull in the same area I left the night before. Another bull had joined the group overnight. Just as I closed the distance to 300 yards the two bulls locked up in a knock down drag out fight. There were too many cows between us for me to work in for a shot. As the bulls parted from their fight I slipped along the edge of the timber in an effort to cut the larger bull off. He passed by me in the open at 156 yards. I shot all summer at this distance, but did not want to push my luck on opening day. As he passed by in the timber I made a plan to get closer that evening. The evening came with another encounter. This time 115 yards with no opportunity to work closer. As the sun set, I felt certain I would take him the next morning.

Day 2: The morning came and went with no sightings of my bull. He switched drainages overnight. Warm temperatures put all the elk back into the timber earlier than the previous morning. 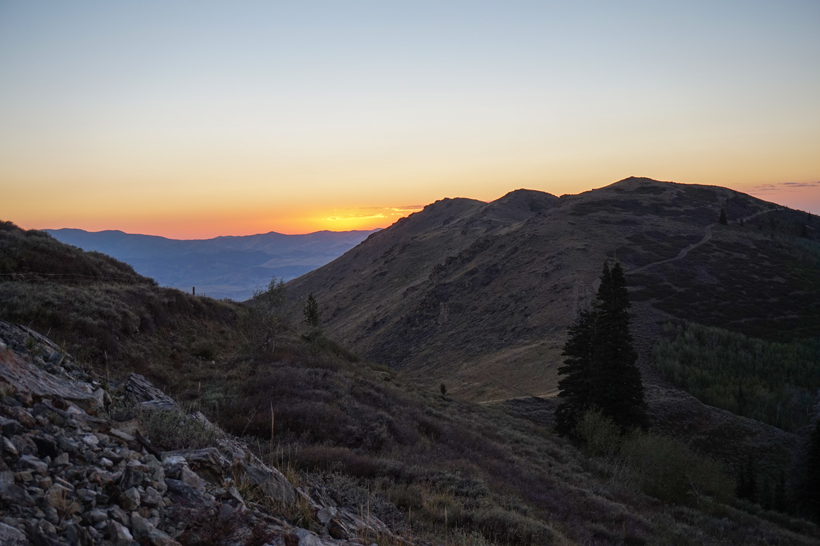 The evening of day two started slowly with warm temperatures. Thirty minutes before dark, I switched glassing points and relocated my bull. With little light remaining and the bull over 2 miles away, I decided to take some time to get some good photos and enjoy the show. As I clicked photos, I took a moment to admire the sunset. As I watched the sun go down, several shots rang out from the canyon below. Readjusting my spotting scope I found my bull only to watch his knees weaken as he fell to two well-placed shots from hunters below that I had not spotted. Five minutes before the shots rang out I took this photo of the bull. 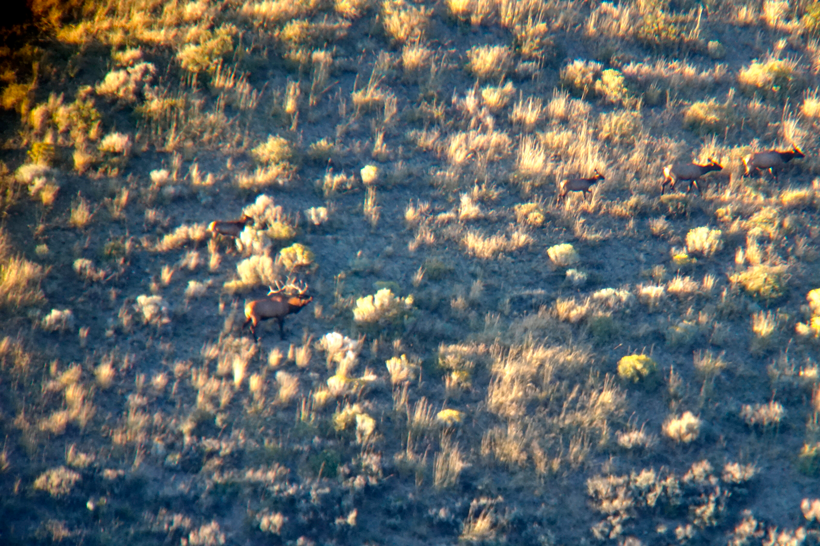 Day 3: Sadness. That was the overwhelming emotion as I broke camp on the morning of day three and struck out for new country. The 6x6 was gone. Strapped to the top of a Jeep Cherokee and headed for parts unknown. In my excitement in locating this bull I had not found a backup. Reviewing my notes from before the hunt, I decided to try an area that I had to yet to scout. Maneuvering the truck through the narrow mountain two tracks, I left memory of the 6x6 behind and found myself on a glassing point overlooking an old burn. 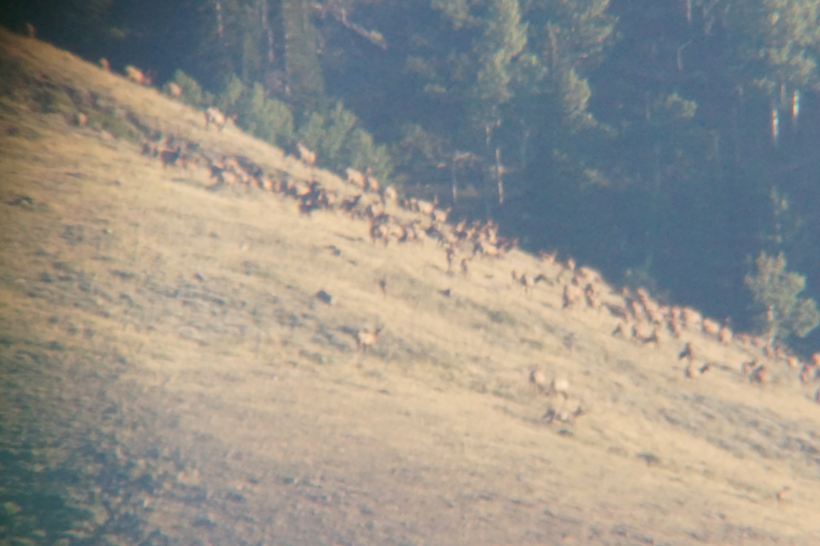 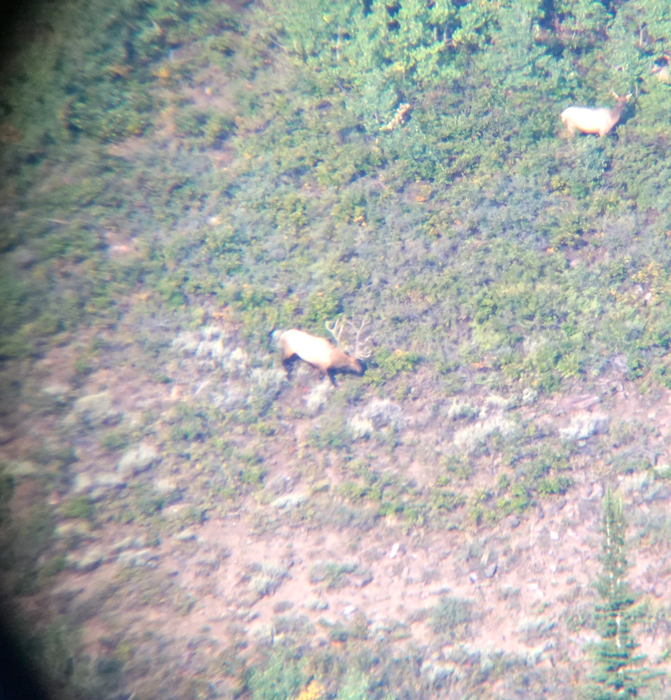 The morning passed and it became apparent that I found the area I needed to focus on. From my vantage point I was not sure which one was best, so a closer look was needed. That evening I found myself amongst both bulls. Overlooking both from 800 yards that evening, I made the determination that either would fit the bill. The forecast was turning for the worst. Warm weather was heading my way. Things needed to happen on day four.

Day 4: I was back in the burn where I located the two bulls the day before. I quickly found both with the glass as light rose. It quickly became apparent that approaching these bulls in the morning was going to be difficult. I watched carefully as the two bulls headed into the timber. I was delighted to find both bulls ease into the same patch of quakies with 30-40 cows in tow. As temperatures began to drop, I gauged the wind and slipped downhill toward the patch. I was met with bugles and chirping cows everywhere. 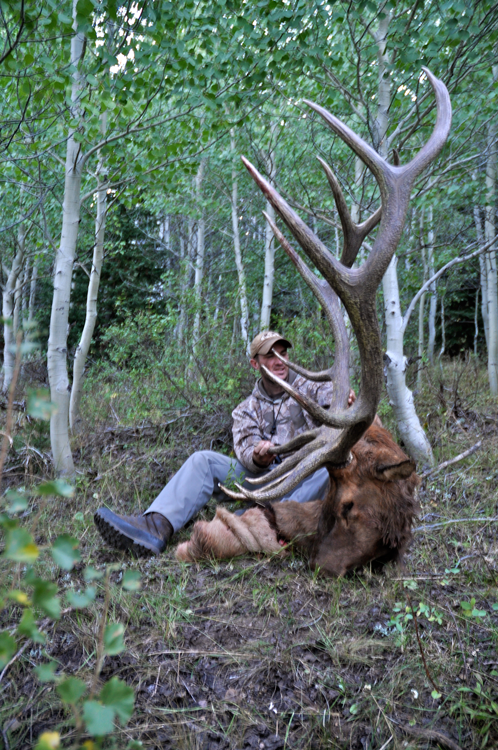 Slowly working through the patch I came upon my bull in the timber and anchored him with two shots, the first at 26 yards and the second at 65. 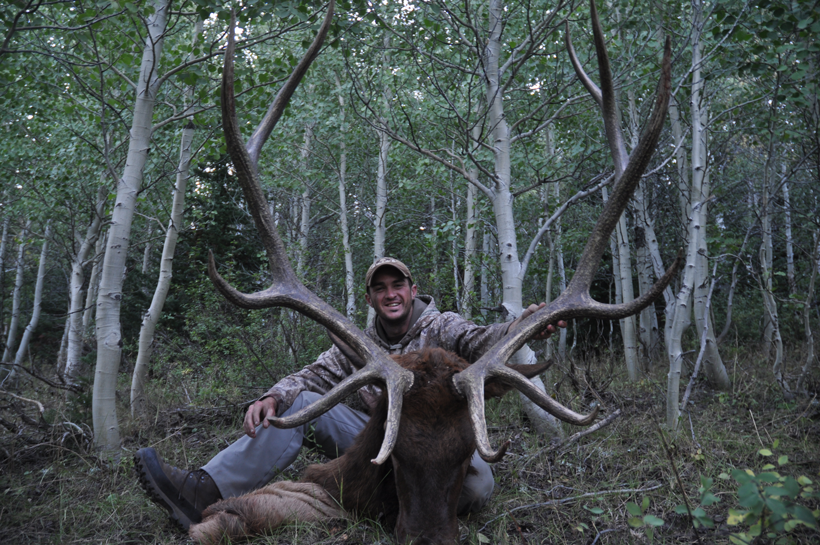 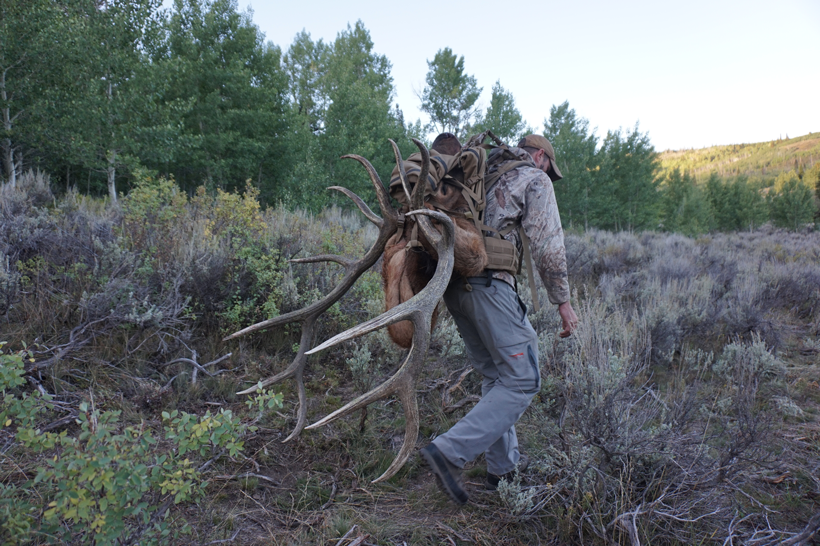 After a relatively short pack out, my Nevada hunt was over. With the pressure off, I spent the next four days glassing for a friend of mine that had a tag in the unit. 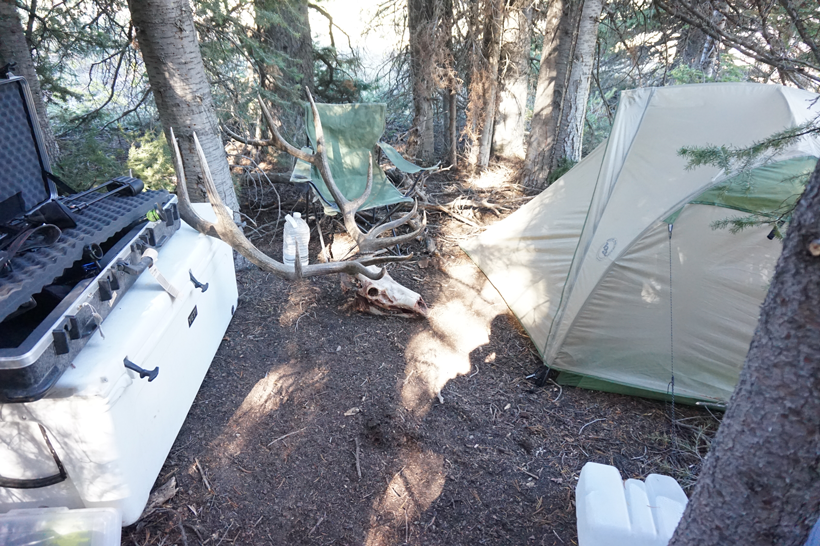 As I look back at the 16 days I spent in Nevada, a couple important thoughts come to mind. First, success in the draw is not always necessary for a great hunt. There are other options out there and I encourage everyone to explore them. 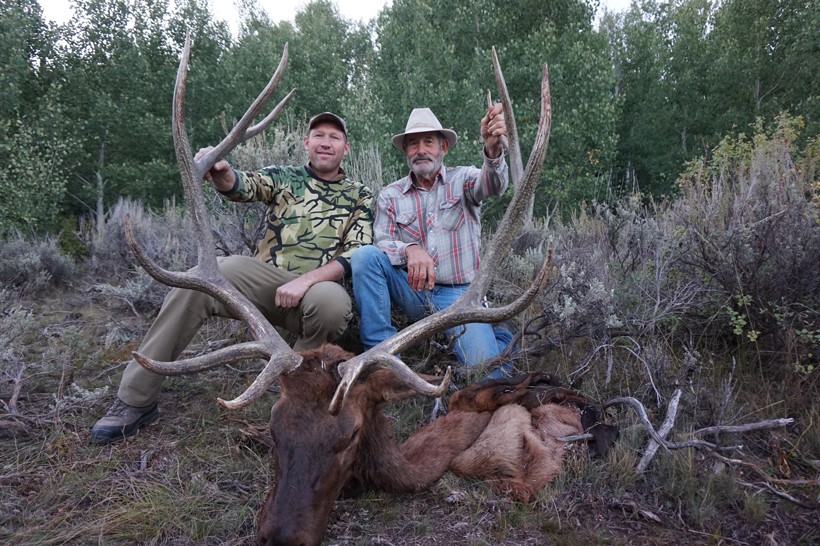 Secondly, we all hope that all hunts end with a trophy, but in hindsight, the bull I have sitting in my office from this hunt offers little compared to the friendships made and the overall experience of seeing new country. As a friend of mine is fond of saying, “if you wanna know you gotta go,” and that certainly holds true for great elk hunts. The best part is always the country.