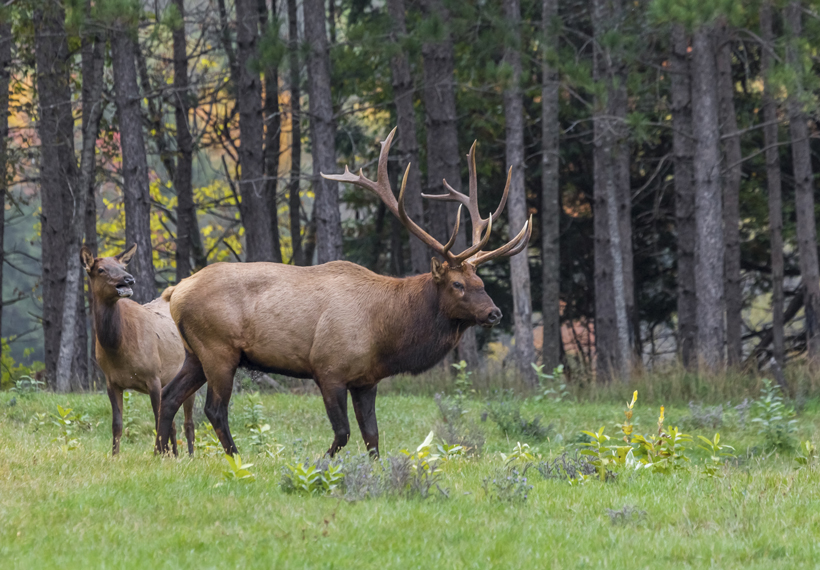 Wyoming Game and Fish biologists are investigating the impact of the mountain pine beetle on elk and hunter movement in the Sierra Madre range on the Medicine Bow National Forest.

One of the most common bark beetles native to North America, the mountain pine beetle was first discovered in the Black Hills of Wyoming and South Dakota in the 19th century. These beetles typically inhabit ponderosa, whitebark, lodgepole, Scotch, Jack Pine and limber pine trees, and normally play a crucial role ensuring the health of a forest: The beetles will take down old or weak trees, helping to expedite the development of a younger, more fertile forest.

The extended drought in the late 1990s and early 2000s, however, led to an unprecedented epidemic. The beetles swept across North America, infesting forests and attacking healthy trees.

Since the outbreak, more than 4 million acres of forest in Colorado and Wyoming have been impacted by the mountain pine beetle. In Medicine Bow alone, more than half of the forest’s 1.3 million acres had been harmed by the beetle as of 2013.

Though the epidemic has slowed, in the aftermath, forests are left with thousands of acres of trees that are dead and falling.

Several years ago, Wyoming Game and Fish wildlife biologist, Tony Mong, began to notice that certain parts of the Medicine Bow forest were completely clogged with deadfall, and found it increasingly difficult to make his way through. Mong began to think, if this was causing him problems, then what sort of challenges was it posing to the elk?

He also began to consider the challenges it posed to hunters, who help manage the elk population. How could hunters make their way to their favorite spots or haul their harvest out with so many obstacles standing in their way?

To shed some light on these questions, agency biologists collared 26 elk in the Sierra Madre range of the Medicine Bow forest, hoping that the data collected from the collars would reveal just how and where the elk are moving in relation to the downed trees.

Last year, researchers collared another 17 elk and plan to collar more in the coming years.

In addition to collaring elk, researchers are also asking hunters to carry GPS units with them so they can record how the hunters move. In the last several years, roughly 250 hunters have recorded data as they hunted.

The agency reports that hunters have been overwhelmingly supportive of the study. Bryan Lamont, a graduate student at the University of Wyoming who is working on the project, admits he was worried that the hunters wouldn’t want their movements tracked as they headed out to their favorite spots. Yet hunters, he said, wanted to help, saying they hoped the research would direct land management plans that will help restore areas they have hunted for years.

Lamont also noted that many hunters spoke of how the landscape has in fact changed the way they hunt. Because it is more difficult to recover and remove animals in the deadfall, many hunters choose to stay on the fringe of deadfall areas, or move to places with more aspen.

The data Mong and Lamont collect will ultimately provide baseline information to compare in upcoming years as more trees fall and biologists collar more elk. They will be able to determine if movement patterns have altered significantly. The data, they believe, will also help guide wildlife and landscape management strategies across the West.

“Nobody is looking at ungulate or large mammal responses (to beetle-killed forests) and it’s obviously a big issue,” said Mong.

“If we can’t manage the elk herd, if the numbers get too high, it suppresses the forest’s ability to regenerate,” Mong continued. “We want to know how the elk use the forest, but more importantly, how we continue to manage the population at a level that is sustainable and allows for proper regeneration of the forest.”

Since the study began, it has attracted attention from several funding partners, including the Rocky Mountain Elk Foundation and the U.S. Forest Service.

It should be interesting to see the results of this study. Right now it is the end of July in Colorado and typically herds of elk are above tree line foraging on abundant alpine grasses and mountain willows. The high country winds also help keep the flies away. But this year is a drought year. The alpine is already brown except for the bottom of draws and seeps. However all that beetle kill understory is lush and green with forbs and grasses. Not many elk in the alpine areas. It will be interesting to see if this is just due to the drought or if Colorado is going to be more of a timber elk state until succession diminishes the current understory found in all this beetle kill.