My 2014 season started the same as most of my seasons do — looking at the different draw systems in the western states to see where I stood with preference points and figuring out what hunts I could swing. With my dad all but guaranteed a limited entry elk tag in our home state of Utah, and only having a couple weeks of vacation, I elected to only build points in Utah, and in the other western states I applied for hard to draw hunts betting that I would build points there as well.

With the draw results posted, unsuccessful was the theme for my entire family including that “guaranteed” elk tag that my dad should have drawn. The only hunts on the table were general archery deer tags that my wife and I had drawn. Another option was trying to find a landowner tag that would work with my budget. After some searching, I found a high country muzzleloader deer tag for Colorado. With the tag secured, the next step was getting into shape to hunt the steep mountain country. 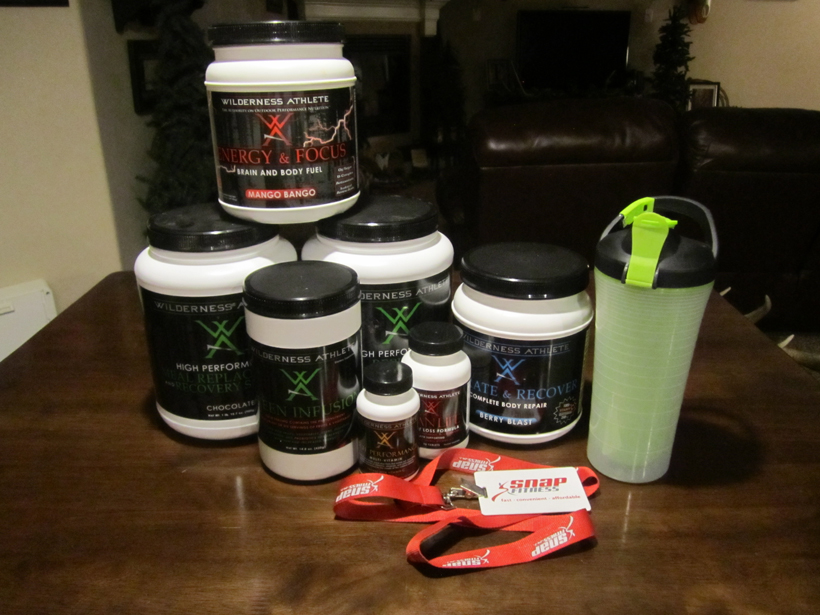 Already a member of a gym, I ordered the 28-day challenge from Wilderness Athlete. Not having the greatest self-control when it comes to food, this program kept me on track. After a few months, I felt I was well on my way to achieve my goal of being in the best shape possible. 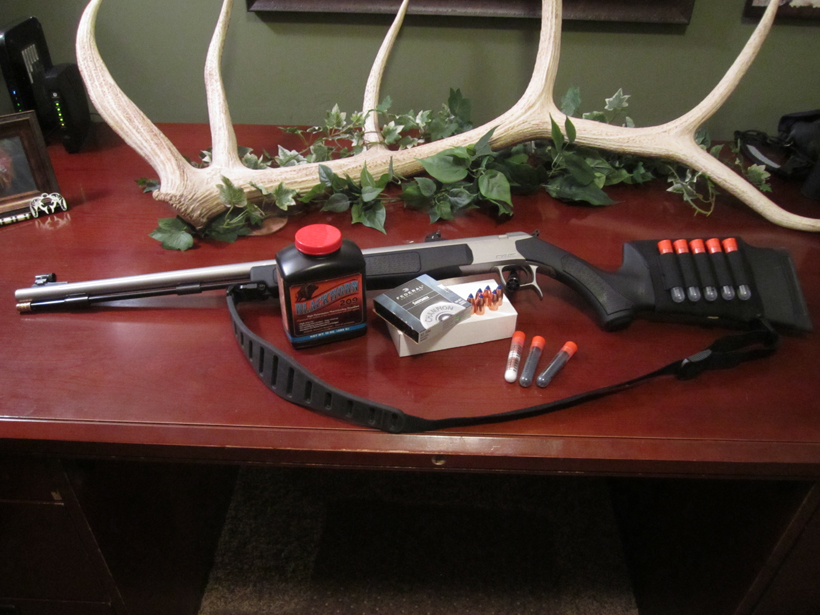 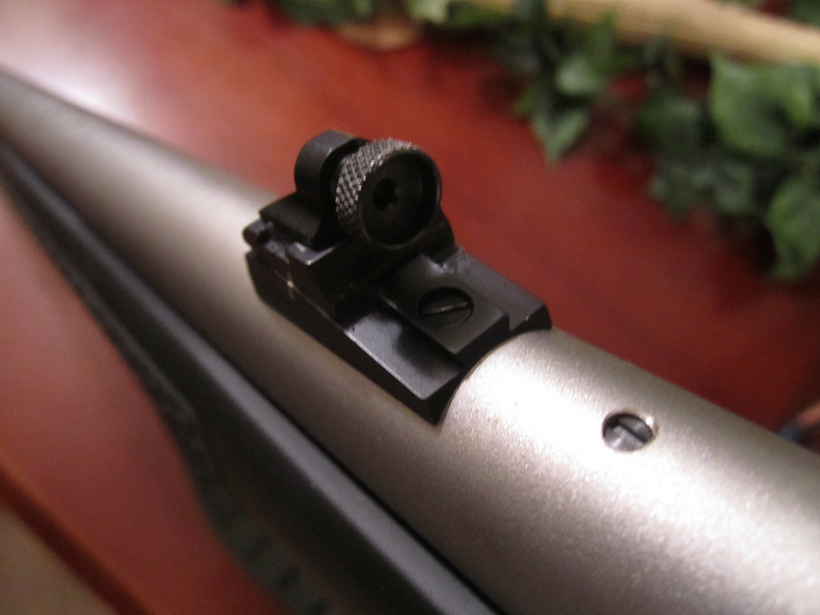 I had chosen a CVA Accura V2, shooting 110 grains of Blackhorn 209 torched off by a Federal 209a primer, all trying to throw a 250 grain accurately down range. To aid with aiming, a Williams peep sight was installed. Thinking that I might need more than the one shot, I used pre measured powder holders, bullets, and primers in a shotgun shell holder on the stock. With the gun setup, sighted in and ready to go, I felt comfortable out to 150 yards. 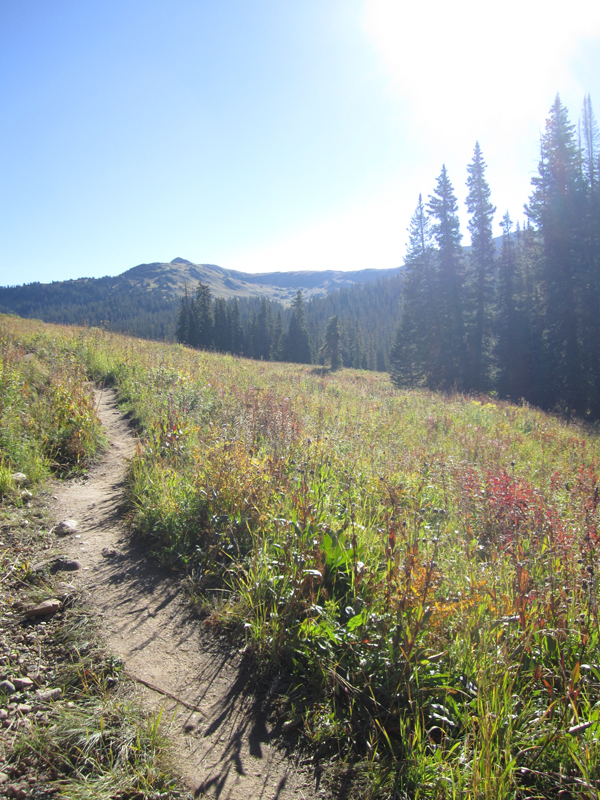 After driving 10 hours, drinking two Red Bulls, snacking on sunflower seeds, Kit Kats, and Red Vines, I was ready to hit the trail. The trail in was just shy of 6 miles, but worth every step. 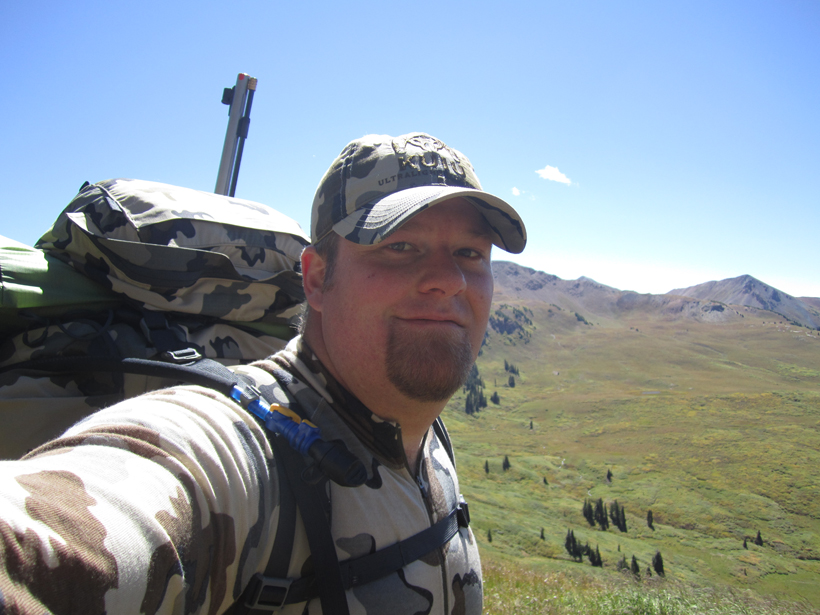 The pack in went better than expected, since I was sleep deprived, and coming down from an energy drink high while carrying a 55-pound pack. After backpacking for archery hunts, which are typically earlier in the year, and only carrying light clothes and a recurve for a hunting weapon, this heavier weapon, and the thicker clothing was more than I was used to. 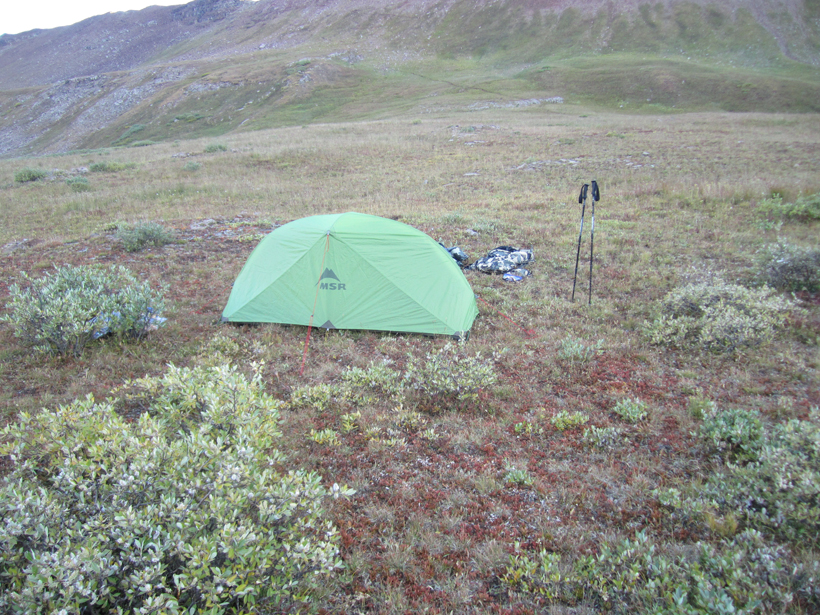 After stopping a few times to glass different parts of the mountain, I made it to where I planned to camp. With the tent pitched, and camp set up, it was time to get behind the glass and find something to hunt. 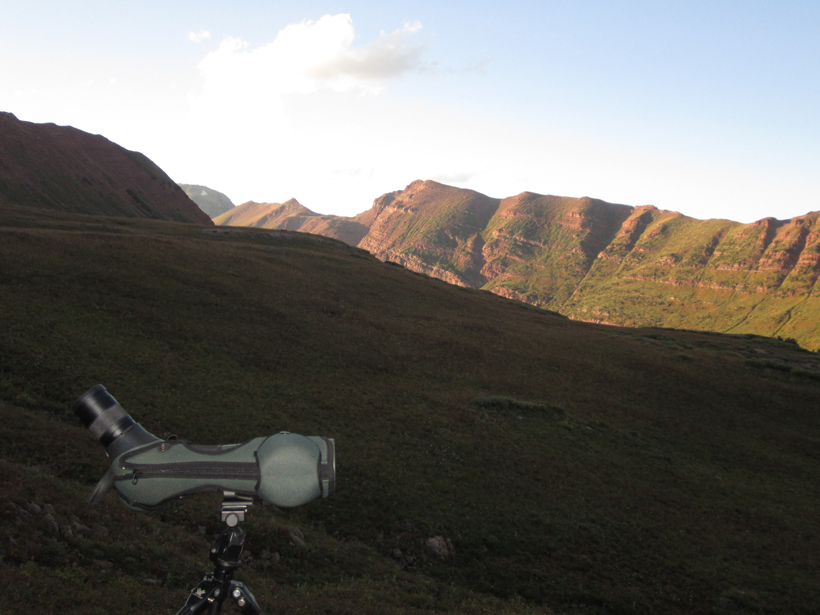 Call me crazy, but the combination I love best for high country hunts are a pair of 15x56 binoculars on a tripod, and a spotting scope. The combination is a little heavier, but you can’t hunt what you can’t see. 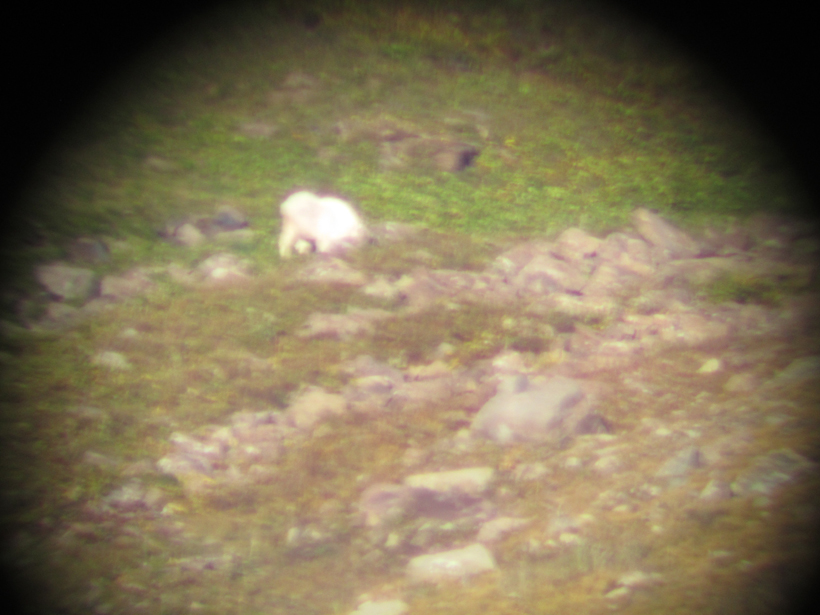 The first animal of the evening was this billy, he was separated and lower than the other goats in the basin, but looked like he was getting fat on the grass and willows. Throughout the evening, I found quite a few deer scattered in the basin with a couple bucks that I kept tabs on as they fed. 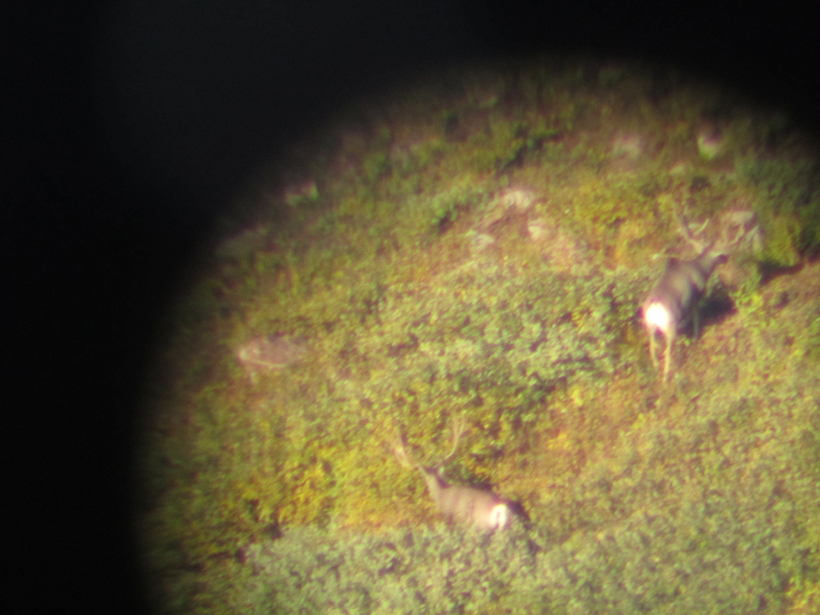 With about a half hour of light left, I turned up two bucks that were together and at the top of the basin. With the spotting scope on them, I could tell that both were ones I would gladly take, given the chance. One buck was still in full velvet and had giant front forks. The other buck was slick horned, with a couple of cheaters off of the right G2, but didn’t have the deep forks that the other buck had. The frames of the bucks were about the same, but I knew if I had to choose, I would take the buck with the big front forks. I watched the two bucks until light was gone, and then it was time to hit the sack. 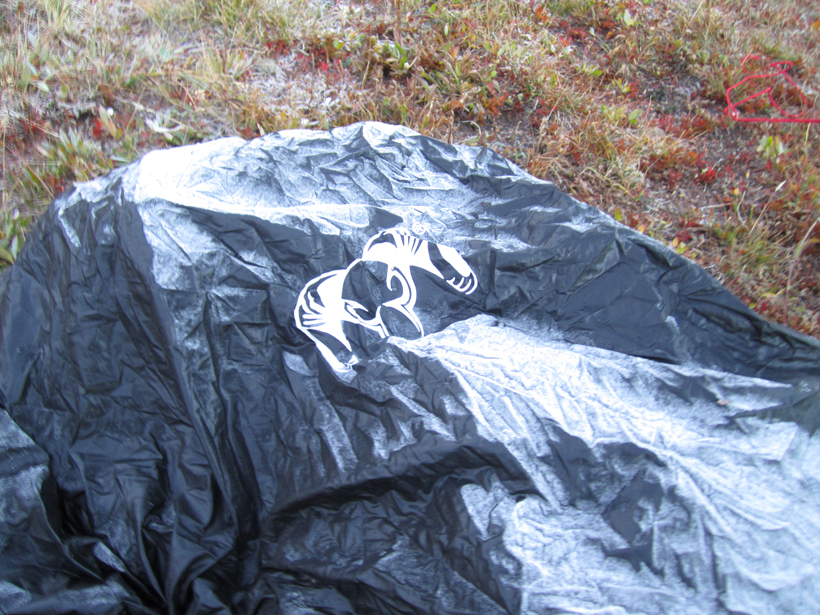 I was glad that I chose to throw in an extra base layer to sleep in. The temperatures dropped lower than I  expected. I slept plenty warm, but it wasn’t a great surprise to wake up to a thick layer of frost covering everything. Making the most out of it, I set anything that I thought I would need out where the sun would hit it at first light, and hopefully melt the frost off. 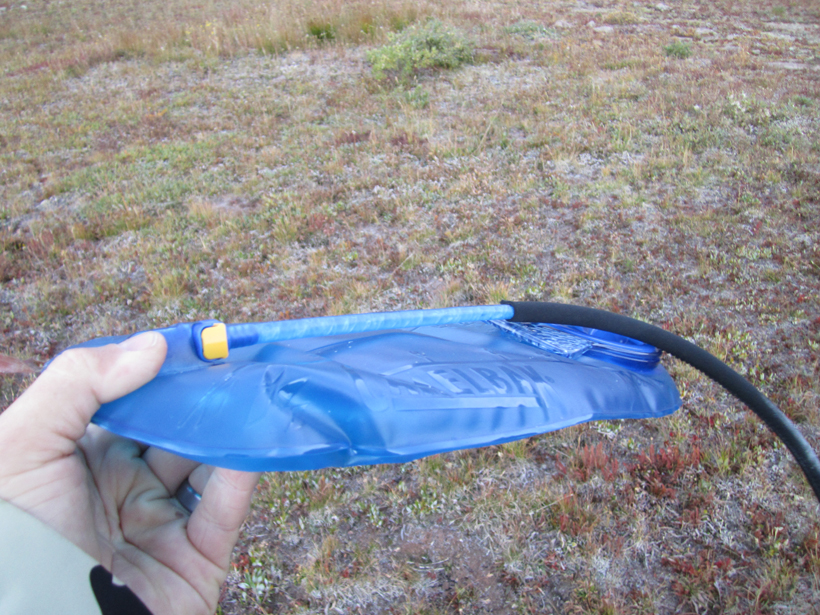 There was one thing that didn’t melt right away, my water bladder, it was frozen solid. Fortunately, I had some water bottles that only got a little slushy, so I had grape slush and Pop-Tarts for breakfast while I started to glass and tried to turn up the bucks from the night before. 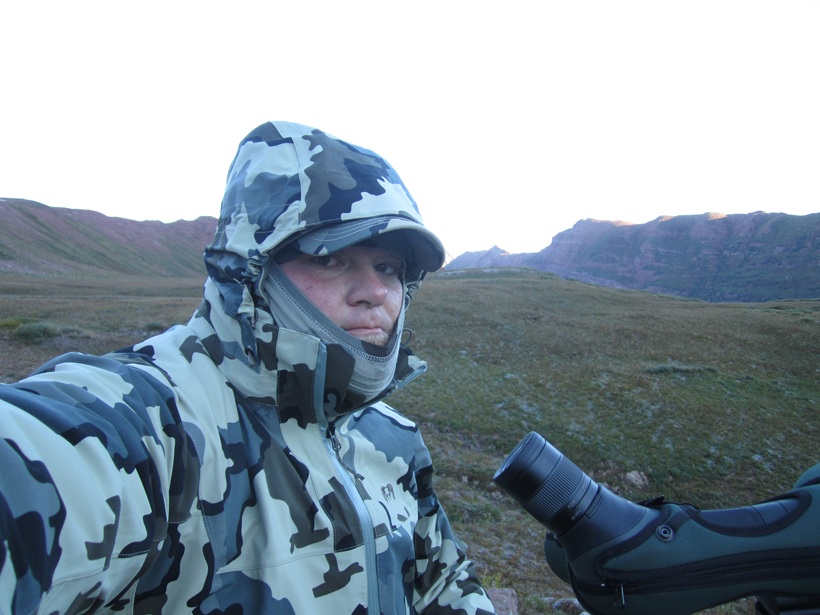 It was cold with a slight breeze blowing, but it didn’t take long to warm up after I turned up the bucks. The excitement started to get real, I was the only one in the basin with a great buck spotted. All I had to do now was keep eyes on him and put him to bed. 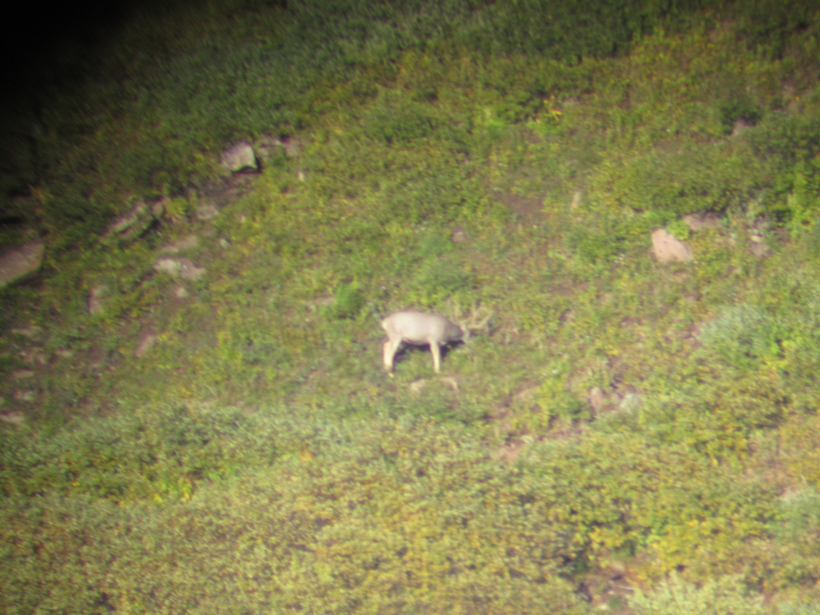 The bucks fed and milled around for a little over an hour before they found their beds. Once they did, it was game on. I double checked the gun, made sure I had food for the day, a water filter, and then strapped on the pack. I figured it would take 3 to 4 hours to get into position on the deer, and hoped I would have a good wind once I got over to them. 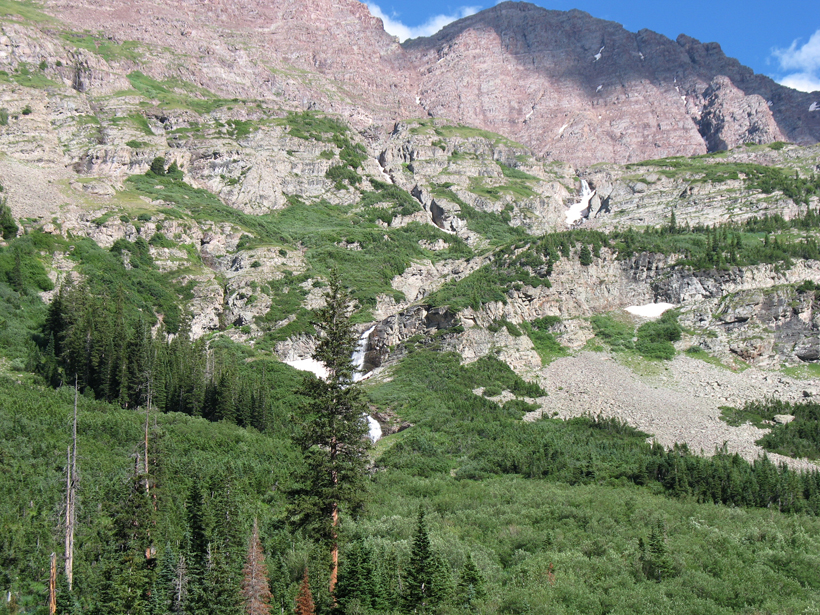 Once on my way, all I had to do was climb a mountain. It was slow going trying to navigate the different sets of cliffs that lined the basin. One benefit was the alpine willows —  with cotton-looking seed packs that kept blowing around, it was like having a constant wind indicator blowing the entire stalk.

After stopping for water once, and making about a three-mile loop around the basin I was finally in the spot I had picked to drop my pack. After a bite to eat and an attempt to calm myself down, I was moving down, at a snail’s pace, above where I left the bucks that morning. After a few steps, I would stop and peek up above a rim of willows, glassing the new ground that I could see trying to turn up the bucks. The fifth time was the charm, bedded facing away from me was the velvet covered buck, with the slick horned buck just beyond. I ranged the velvet buck and it read 113 yards, and was slightly downhill and well within my comfortable range. There was a rim of rocks just down and to my right that would clear me of the willows and cut a few more yards off. Being as quiet as I could I slid down to the opening, keeping an eye on the bucks through the willows. After 25 minutes, I finally reached the rim rocks and the rangefinder read 76 yards, which was way closer than I planned. I set up and began to wait, and wait, and wait. It crossed my mind to throw something, maybe make some noise or move just a little to try and get them out of their beds so that I would have a shot. But I finally figured that I had worked so hard to get here, I wasn’t going to blow it on not having enough patience. After 50 minutes of sitting in the sun, the velvet buck stood, I was still in position, placed the sight right behind the shoulder and touched it off. The shot echoed throughout the entire basin as the buck hunched and took a step back then bedded back down. The slick-horned buck bolted at the shot and ran down the steep slope. Trying to load another round in the muzzleloader, I watched in disbelief as my buck flopped over the edge of a 20 to 25 foot cliff and out of sight. All I could hear was the crashing of the buck tumbling down through the brush, rocks, and off of more cliffs. The only thing I could hope for was that I could get down to him and get him taken care of. 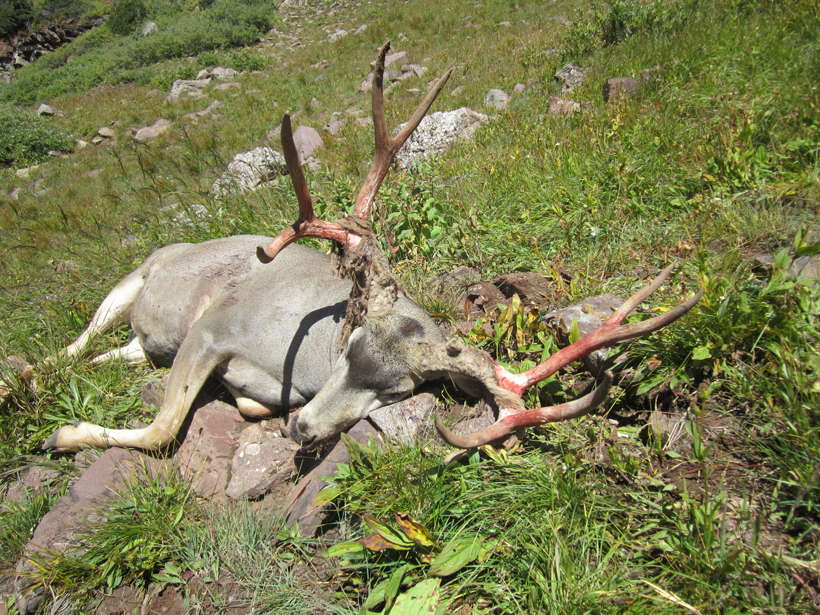 After weaving my way back and forth through the willows and rows of cliffs I found my buck resting at the base of the chute he rolled down, nearly 700 vertical feet. I was in awe as I walked up to him, I knew that he had a good frame and had big fronts but had no idea that he was that good of a buck. He had striped the velvet on the fall down the mountain, but I was happy to find that was all that happened. 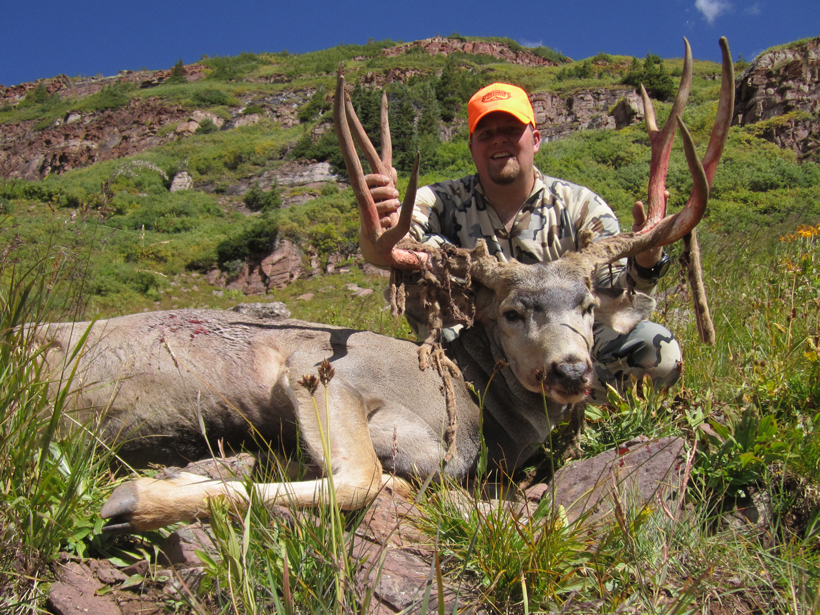 After a few photos, I got busy getting him broken down and loaded in the pack for the trip back to camp. After a 6-hour hike back to camp, I was ready for bed. I laid the meat out to cool (or freeze as it would turn out), made dinner, and hit the sack. The next morning, I waited for the sun to be out before I rolled out of bed. After breakfast, I loaded up camp, the meat, and the head all on my backpack and prayed it wouldn’t bust at the seams. Once on my way, I could tell it was going to be slow going, after 9 hours I have never been so happy to see the truck. This hunt tested me, mentally and physically. It was also one of the most challenging hunts I have been on.

I’m thankful for a family that got me into hunting, and for good friends that share my same passion. Most importantly, I’m grateful for a beautiful wife that supports my hunting addiction, even if she thinks that I’m crazy for going solo into the backcountry.

Thanks for sharing your experience! I guess you were hunting the September muzzleloader season in Colorado? What unit if you are willing to say?

Thanks Tammy, this was by far one of the most memorable hunts I have had.

Great job on a beautiful buck.