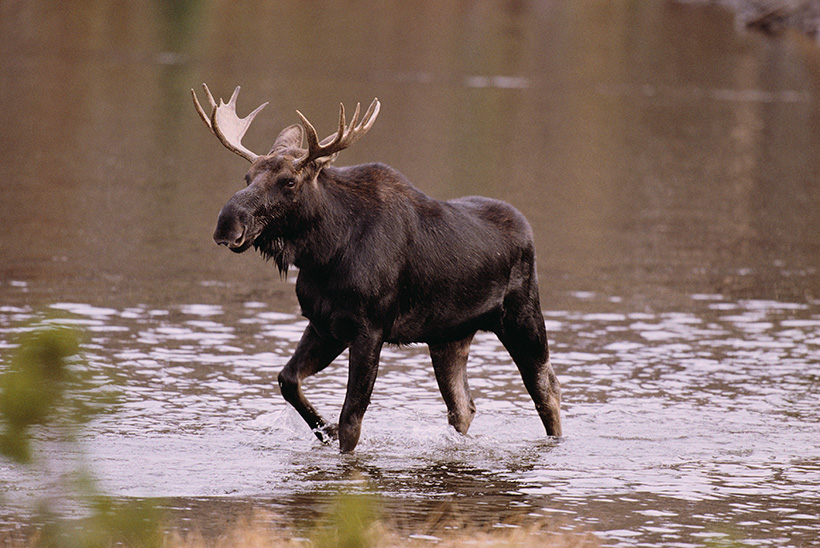 A bowhunter shot and killed a bull moose over the weekend within feet of several wildlife watchers. Though the hunter had the proper tags, and it was a legal and clean kill, some are enraged over the animal’s death.

The incident took place near Brainard Lake in the Roosevelt National Forest, nearby the town of Ward, Colorado. The recreation area is well-known for its gorgeous views of the mountains and its abundant wildlife, including several large bull moose. Wildlife watchers say that the moose have become so accustomed to people that they tolerate photographers and allow people to get relatively close without shying away.

"These are basically pets," said Kim Lehman, a campground host near Brainard Lake. "They're tame. They're not afraid of humans at all.”

Thus, when one of the moose was killed by a bowhunter just feet from the road, it set off a maelstrom of controversy.

The one-month archery season runs through the end of September. The hunter had a proper license and permit, and the area was open to hunting. But while this was legal, many are saying that is was far from responsible, ethical and safe.

"There's no hunt in that kind of kill," said Lehman.

"This was a trophy hunt," said Virginia Miller who is also a campground host.

After the moose was shot, the wounded, 1200+ pound animal bellowed in pain and ran through a willow brush before eventually dropped near several wildlife watchers.

"It definitely upset a lot of people," said William Clark, of Colorado Springs, who witnessed the incident and noted there were children in the vicinity who also saw the moose die. "I'm sure some of them came up there just to see the moose. And then the first one they see is one that got killed.

"That could stick with the kids for some time.”

The panic also set off the other moose in the area, who began running around an area with dozens of spectators, photographers and families.

"I don't think it was the gentleman's intention to have the animal go in the direction of where the wildlife watchers were," said Jennifer Churchill, spokeswoman for the northeast region of Colorado Parks and Wildlife. " Forest service land is hunt-able. And this was a clean and legal kill.”

Yet the wildlife watchers are not saying the hunt was illegal, they are more upset over the nature of the hunt.

"Nothing illegal at all," said Miller. "Totally unethical and immoral.”

"It's like going into a zoo and saying, 'Wow, I like that lion. I'm going to kill him,'" said Lehman.

Lehman herself hunts and fishes.

"That's not hunting," she said. "Hunting is when you go out and sit in the woods and wait for them, or track them or be part of their environment and take them down.”

"He was 10 feet away when he shot him," said Miller. “The sport was taken out completely.”

Despite the fact that the setting of the kill was less than ideal, Churchill maintains that the hunter did everything by the book. In fact, the hunt was arguably well-executed.

"If he had waited, he may not have had another opportunity to take this moose," said Churchill. "We are talking about, kind of, a hunt of a lifetime.”

Churchill also says that the hunt could be used as a “teaching moment” about the crucial role hunters play in helping to manage wildlife populations and paying fees that support conservation efforts.

"Moose have no natural predators in Colorado," said Churchill. "Hunters help manage wildlife populations. We would not have wildlife in Colorado were it not for hunters.”