Beating the odds in the Colorado high country

I am a high country mule deer addict. It consumes my summers, winters and falls. I constantly research for that next hunt all winter, then spend the summer doing as much scouting as I possibly can in order to locate that special buck that really trips my trigger.

Going into the 2014 application season I was ready to change it up a little. I love chasing muleys in September so much that I will use any weapon that gives me the opportunity to do so. Up until 2014, that had meant chasing them in the Colorado high country with a muzzleloader or with my bow but this year was different. I was ready to cash in my preference points and put my name in the hat for an early season rifle tag. From my research, I knew that I had a slim chance of actually drawing, but somebody from my point pool would likely draw a tag. As it turned out I beat the odds and it was meant to be. 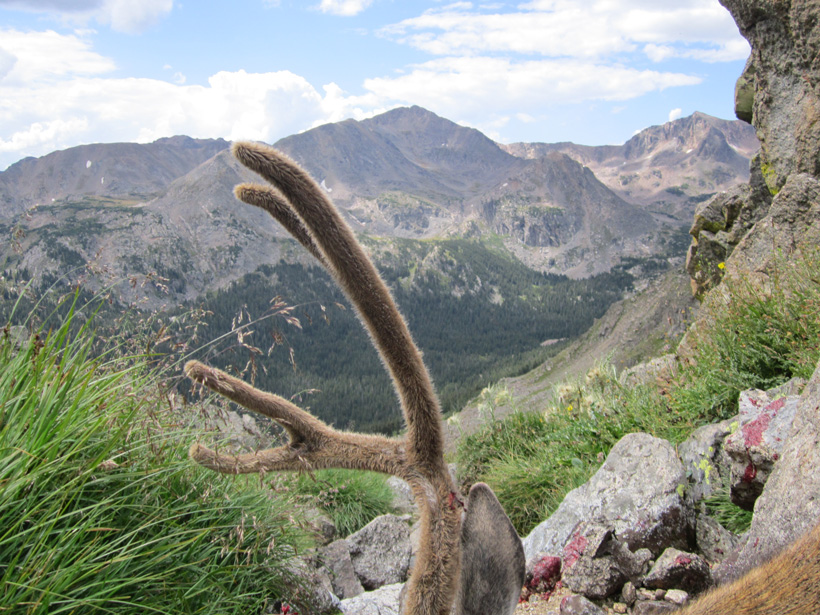 My 2013 archery buck that I was able to harvest on a tag that I drew as a second choice. I had been hunting second choice units and using landowner vouchers to save my points for an early rifle tag. 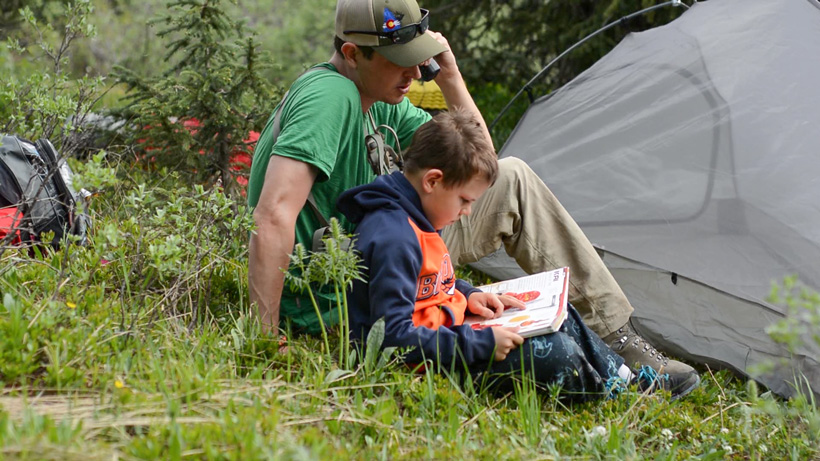 Finally, it was early July and I was able to make my first scouting trip. The first scouting trip of the year is always a special event for me, but this one was even more special as my seven-year-old was able to join me for his first backpacking trip. We found a few mature bucks, but the best part for me was spending time with my son in the remote back country. 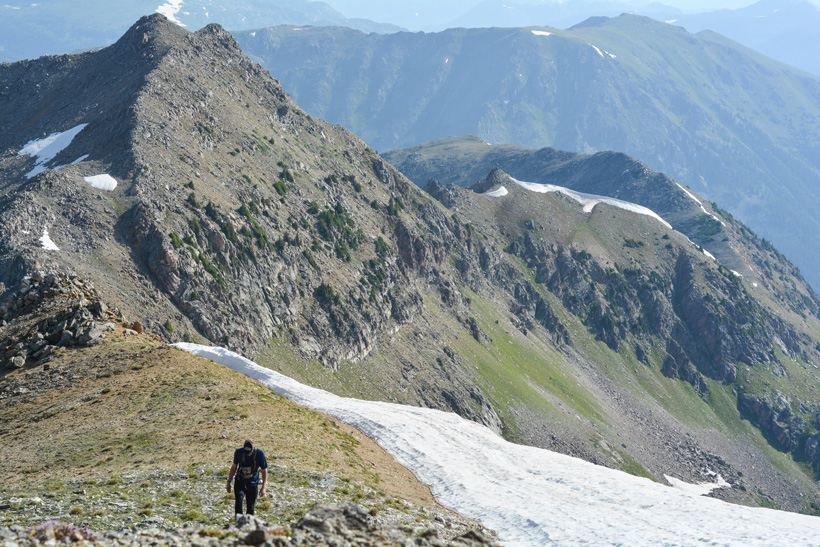 I continued to scout at least every other weekend. There’s no doubt this was rugged and steep country which keeps people out. I enjoyed not being overrun by hikers on most of our scouting trips. 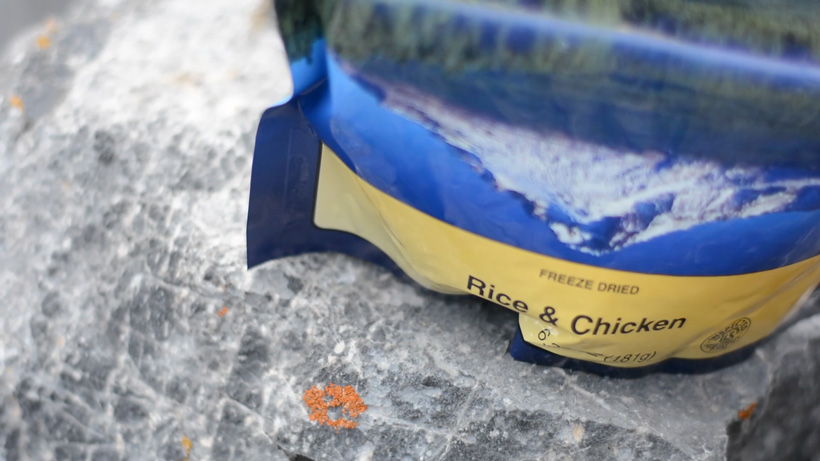 In addition to being a mule deer nut, I’m a gear junky as well. I use my scouting trips to keep dialing in my system before I really need it on the hunt. I always seem to come back to good old Mountain House for my dinners in the high country. 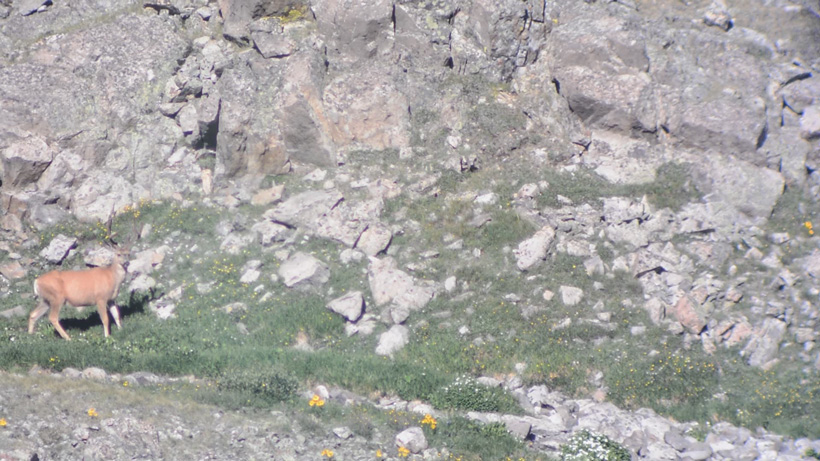 I was turning up mature bucks on every trip, but I was struggling to find one that was a no doubt shooter. 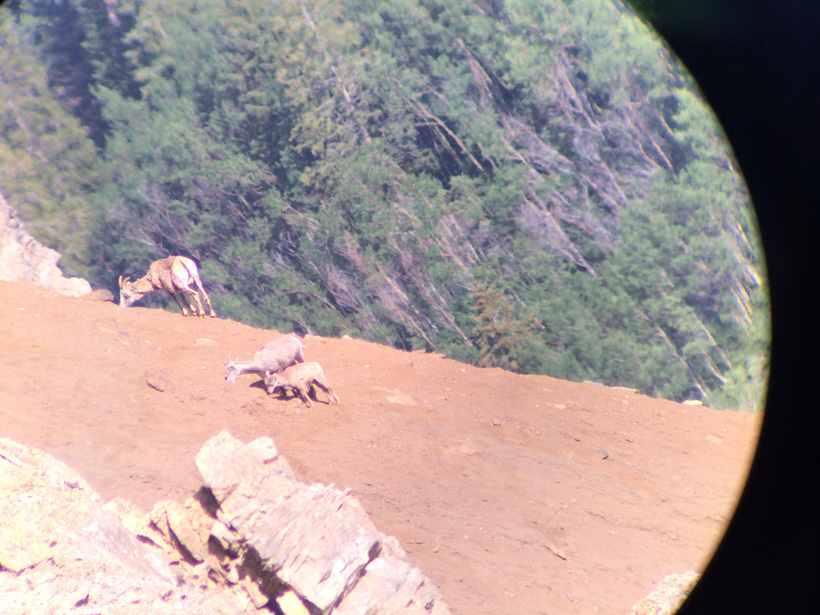 In addition to deer, I was seeing plenty of bighorn sheep, an occasional mountain goat, and a plethora of elk. 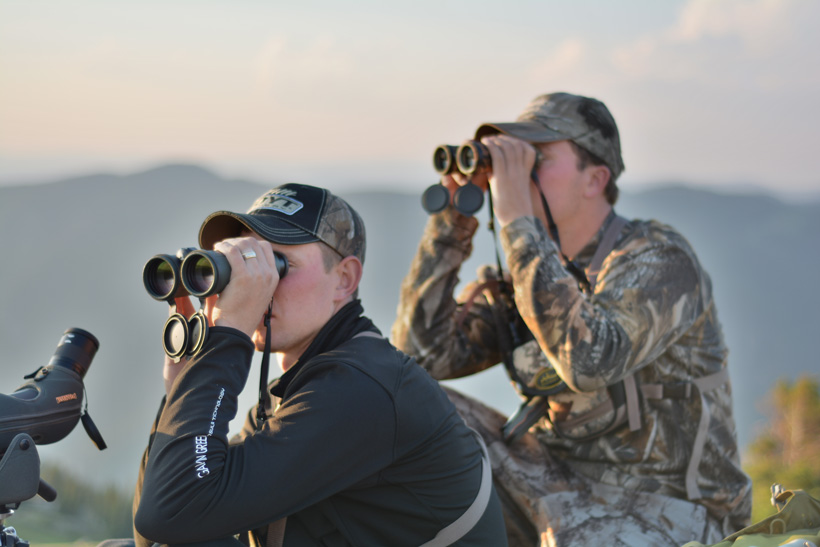 While most of my scouting trips were solo. I was joined by a couple of good friends on one particularly memorable weekend. Mike Neal and BJ Smith came up and helped me check out a new area, hoping to turn up a bruiser. 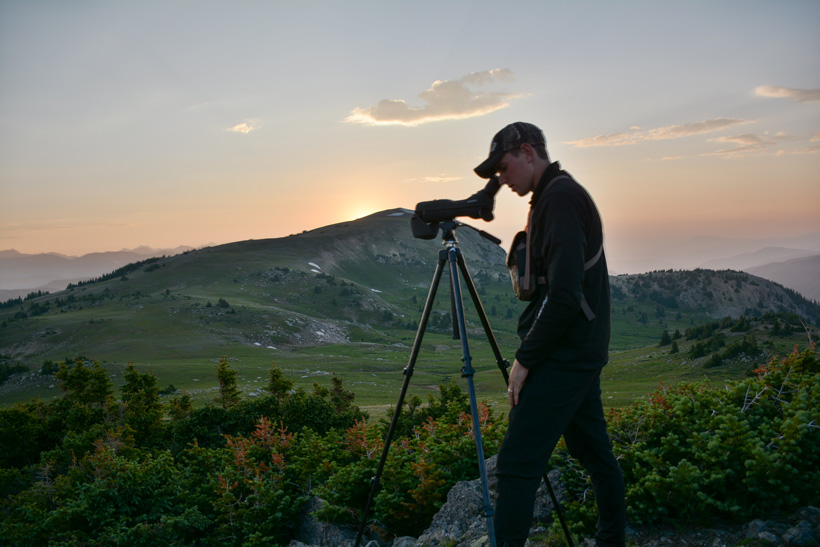 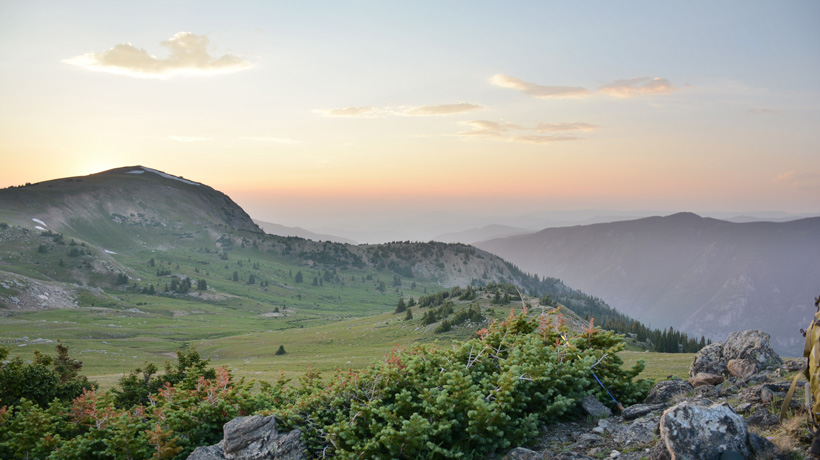 Having good friends on the glass really motivates me to get creative and take some pictures since I don’t feel that I have to focus all of my energy on finding animals. Mike is a great hunting partner and really pushes me to keep hiking over that next ridge to seek out that hidden hidey hole. 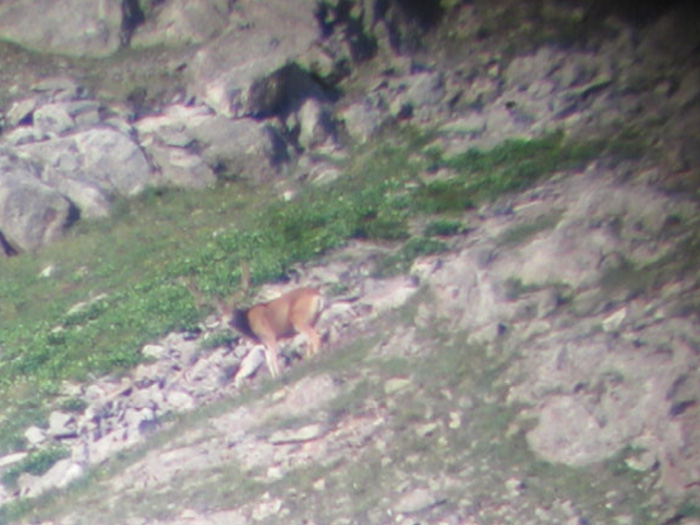 Toward the end of August, my buddy, Scott Peonio, checked on a bachelor herd I had found a couple weeks earlier only to discover that a big droptine buck had joined them since I last checked on them. I was going to get one more scouting trip in before the season and if I didn’t find a monster I was going after this buck that Scott had dubbed “Fourth Down” because of his G4 droptine on the right side. 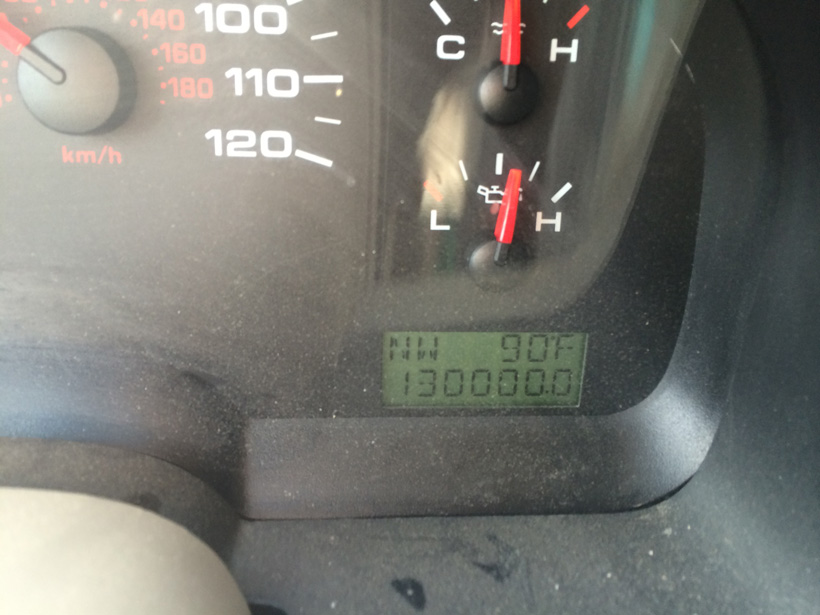 I made that last trip, which resulted in a few mature bucks, but nothing that I wanted to chase more than Fourth Down. As I headed home to hot and dusty Utah, I was excited and nervous about what the season opener would bring in two weeks. I had put over 3,000 miles on my scouting trips and I hoped all of that effort would pay off. 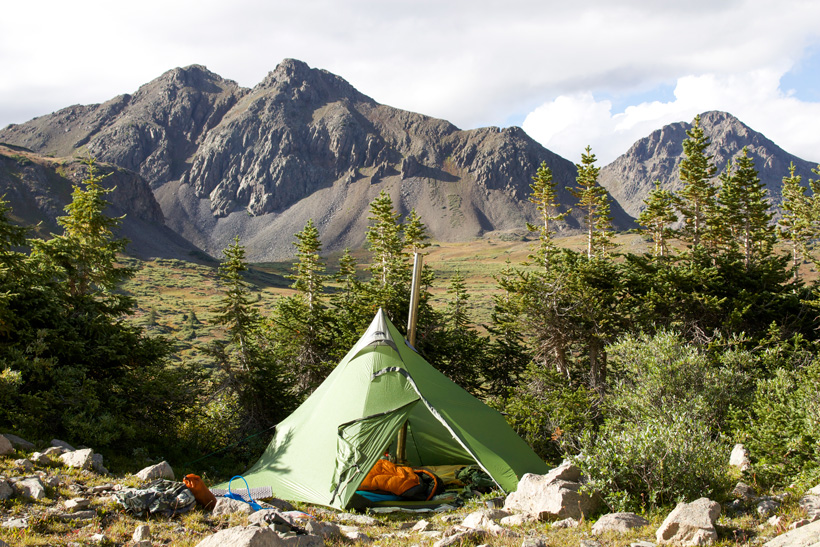 On the morning before the season, my friend, John Bielak, and I headed up the hill to set camp in the basin adjacent to the one that the big buck called home. As we crested the knife ridge that afternoon I was excited to see if we could relocate him. 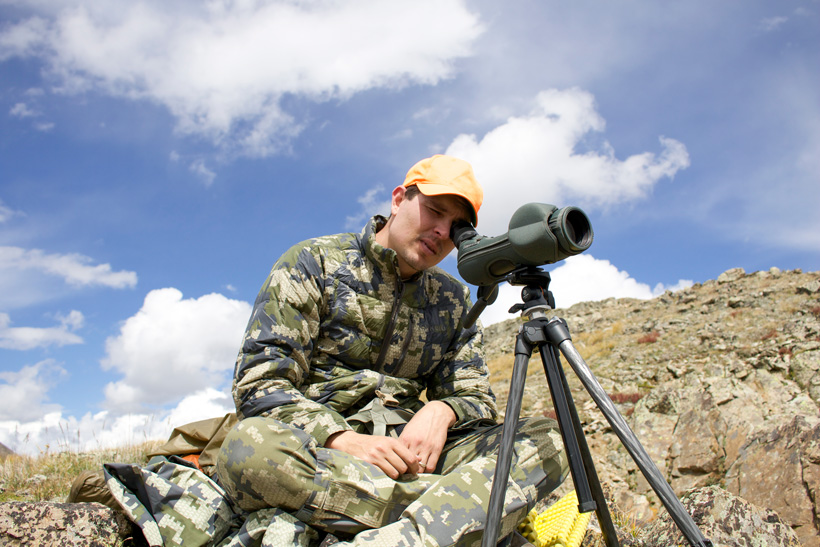 After a short time glassing, I picked up a buck high on the ridge in my binos. He was just 600 to 700 yards from the ridgeline, which would mean safety for him as the adjacent unit did not have an early rifle season. As I studied the buck I saw it was, in fact, Fourth Down. As I watched him my excitement turned to confusion. There was a small white spot that seemed to move around with him just off his neck. Finally, I was able to get a good angle and see that there was an arrow solidly embed in his neck midway between his shoulder and his head. My mind was racing with all kinds of thoughts and questions. Was there still a hunter after him? Would we have company in the morning? Is he going to be OK if I don’t harvest him? Things got worse as a large thunderstorm rolled in and pushed us the thousand vertical feet back to our camp to ride it out and worry about what the morning would bring. 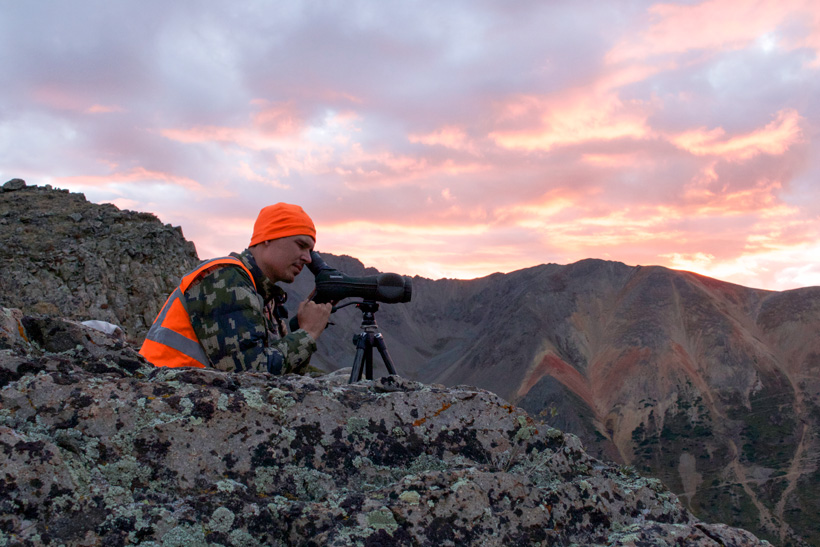 We made our way back up the ridge in the dark and got in position to relocate Fourth Down. I was beginning to get concerned when we hadn’t found him after close to an hour of glassing, but then I located a forked horn buck way across the basin moving through the willows. I looked for other bucks and was able to pick out a couple more, but there was no sign of Fourth Down. I made a mental note of their location and continued to scour the basin. Several minutes later I came back to the group with the spotting scope and spotted a new huge bodied buck in the field of view. I studied him for just a second and I knew it was Fourth Down feeding along through the willows, arrow and all. To my surprise he had moved over a mile across the basin to join his old buddies for a night of devouring willows in preparation for the long winter ahead.

As we watched all of the bucks bed down, we marked the location where the buck we were after bedded about 75 yards below his buddies with a commanding view of the basin. This was going to be a long stalk and I wanted to be patient, but I was also worried there may be other hunters in the basin pursuing him, too. We made our way down to the ridge directly across from him in good time, but this is where we ran out of topography and cover to hide our approach.

Our only option was to get in a creek bottom that bordered on being a waterfall at times, and slowly pick our way down to the bottom of the basin. After what seemed like forever we finally made it down to the bottom. We left Nick about halfway up the hill to keep an eye on the buck and give us hand signals as the stalk progressed. We belly crawled through the willows until we made it to the base of the hill that the buck was bedded down on with some relief to cover us. We quickly made our way from 500 yards out to a small opening where we stashed our packs and got ready to close the last 100 yards to get a shot. 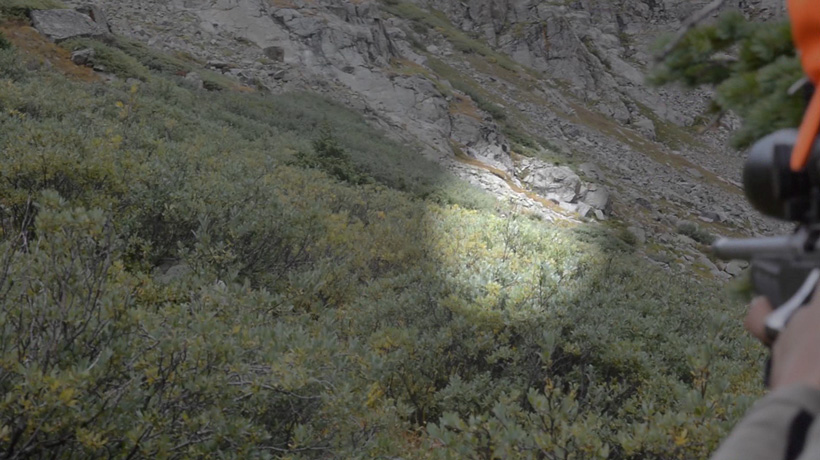 As we got to our predetermined shooting location on a small pine, I instantly located the huge buck staring right at us above the willows. He had us pegged just 98 yards away. I was in such a hurry that I put the crosshairs on him and jerked the trigger. Luckily for me the safety was on and this mistake gave me a second chance to compose myself and make a perfect shot that dropped him in his tracks. 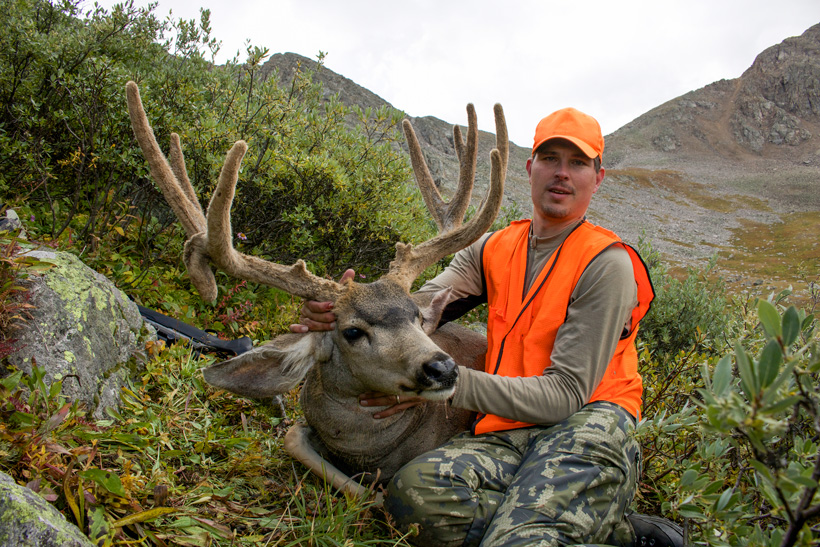 As I walked up to this buck I felt all of the normal emotions I feel when I walk up to a majestic muley and a couple of new ones as well. I was thankful that I had been able to get this great buck and thankful that the he wasn’t going to go to waste on the winter range from an infection in his neck. I also wondered how many other hunters these bucks evade on a yearly basis to get to be 5+ year old monarchs. I was extremely thankful to have an awesome wife and children that support me in my passion for chasing high country muleys as well as awesome friends that help get me through the long winter and summer with constant discussions on draw strategy and hunt planning who then help out with the scouting, filming and, hopefully successful pack outs after these hunts. I am specifically appreciative of Scott Peonio, John Bielak and Nick Bosley for their help in 2014. 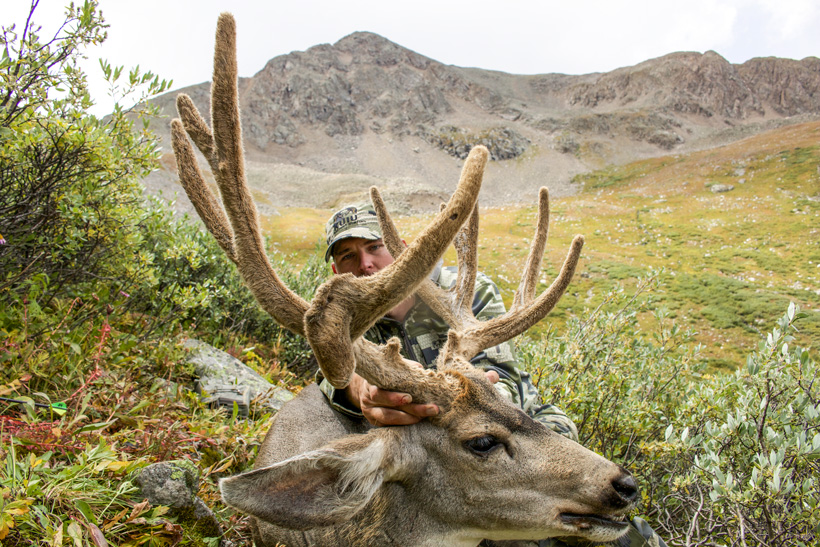 This was a beautiful 30” wide buck with inlines and a drop tine for a G4. 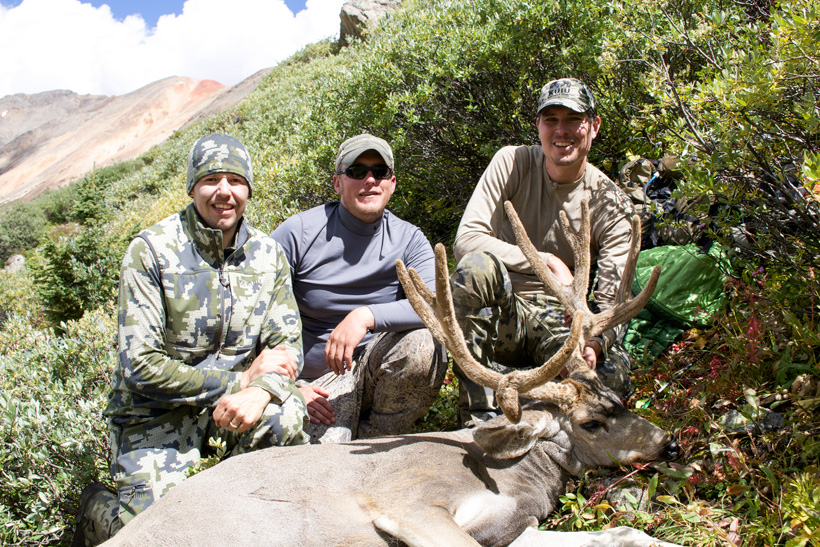 I had a great time with my good buddies John Bielak and Nick Bosley. 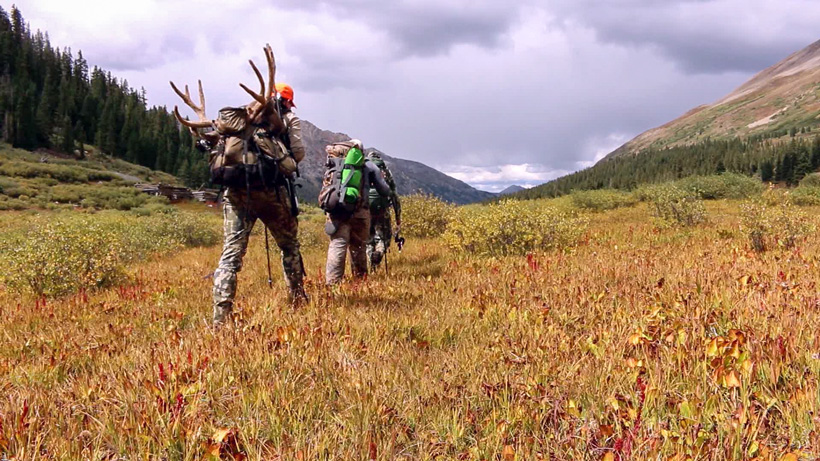 With three guys we made short work of the pack out. 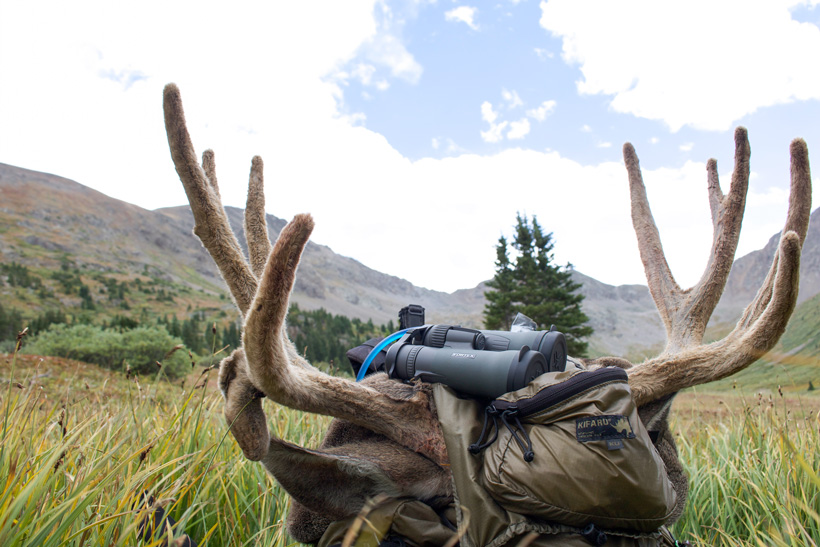 As I admired the beautiful velvet rack I commented to Nick that I was sad the hunt was over so quick. Nick didn’t even hesitate when he put it in perspective for me that the hunt was all of the time and the hard work before the season; today was just the icing on the cake.

Video of the hunt and scouting efforts: