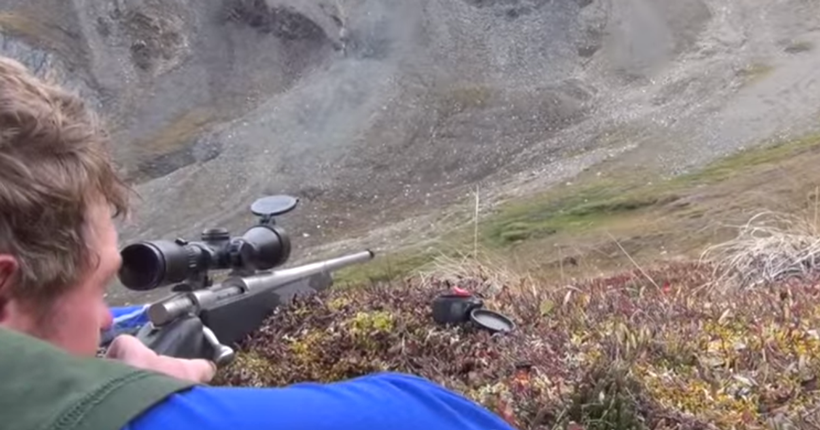 The rush of blood pumping, my heart bouncing against my chest, I laid prone with my rifle steadied, waiting for the perfect shot. All of the excitement lead up to this exact moment passed through my mind, but with the flick of the safety and a last settling breath, everything paused. 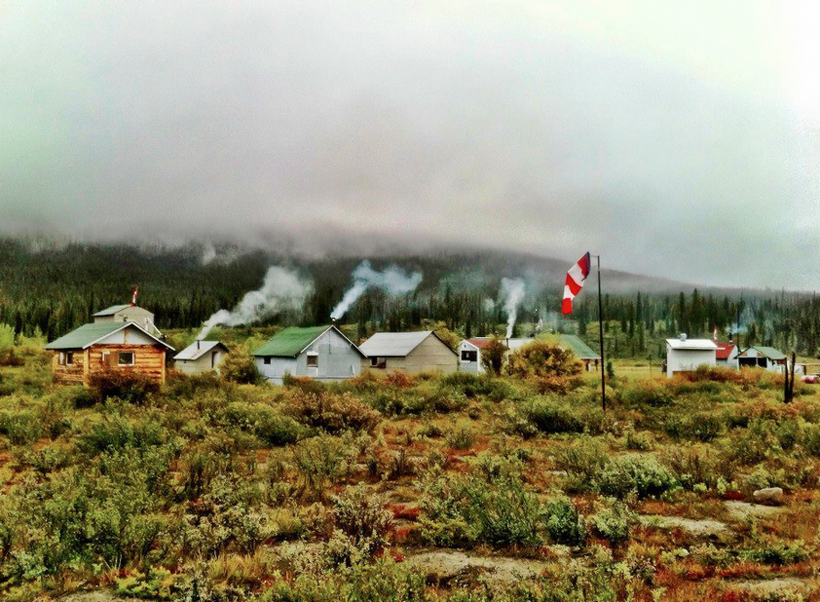 Two weeks before, during one of those cold damp September evenings at Ram Head Outfitters base camp, Michael, Tee, Johnny and me sat in the guides’ cabin, talking away another night solving the world's problems and telling tall tales.

Someone mentioned our Stone sheep hunt and the excitement in the room grew since just a few days before, Johnny invited me to come along with his friends, Omer and Garrick, on a hunt in British Columbia. Over the years, I have not been able to find the time to pursue Stone sheep. As a guide in the Yukon, the season went well into October and, by the time we wrapped up, I was lucky to get out without old man winter forcing me to take refuge. 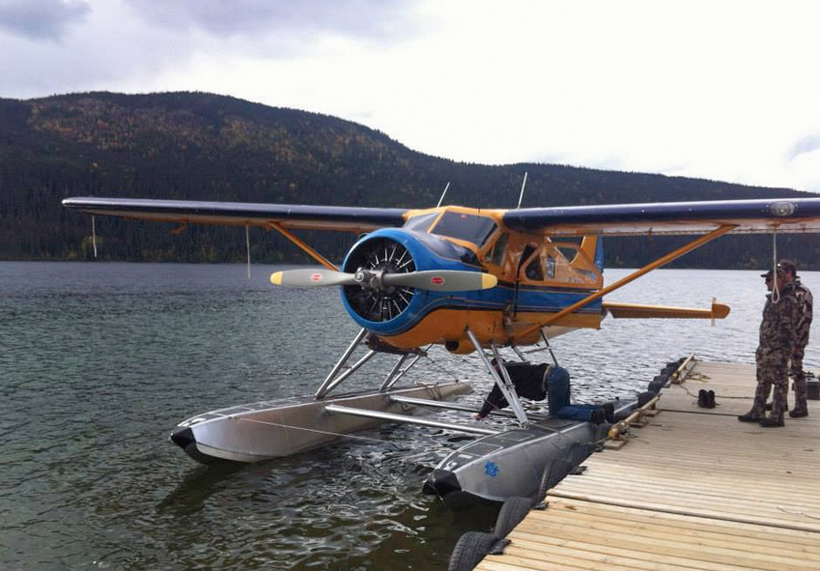 September 18, 2013 - The day finally arrived and reality set in. The float plane dropped us off with our gear, turned around and throttled off the lake, echoing into the distance and leaving us with a chilling silence. Johnny and I made passing eye contact and didn’t say any words. I'm sure you could come up with a thousand words to describe our one expressions.

We knew what this meant and we quickly started the task of making camp and organizing gear. The evening consisted of planning and strategizing for the upcoming days. I was going to head south with Omer while Johnny and Garrick would head north. SInce both groups would have a satellite phone, we planned to call every night to see how each group was doing and what we were seeing. 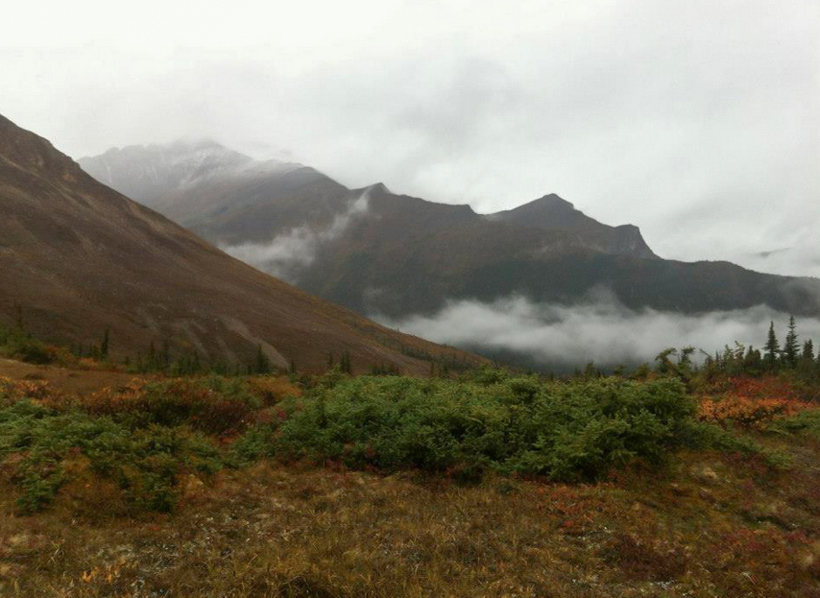 September 19, 2013 - With the crunching of falling leaves under hiking boots and silly songs running through my head, Omer and I were heading up an old game trail to higher ground and hopeful sights. Several hours later, peeking out of the trees into rugged alpine bowls, we were greeted by rain and foggy shaped mountains. Taking it as a deserved rest, we sat out the fog and rain and glassed hillsides as best we could. 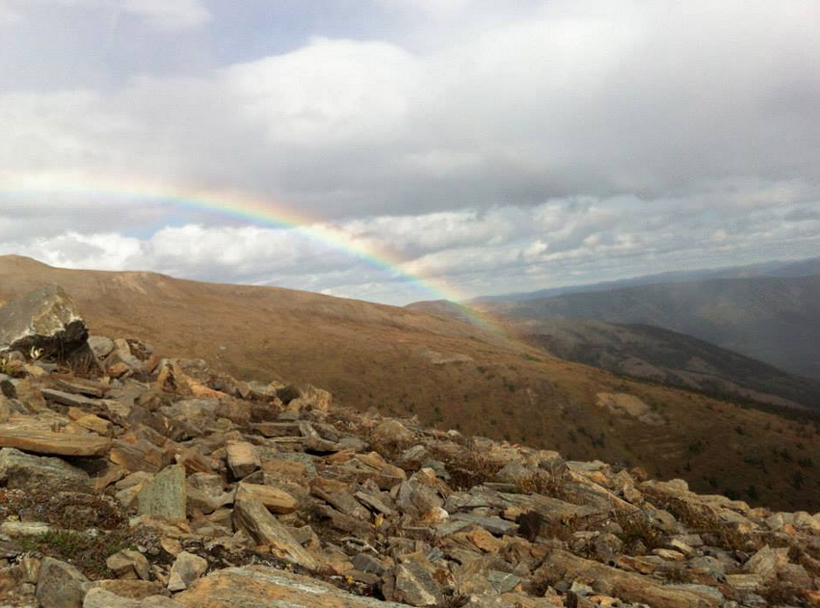 As all mountain hunters know, when one weather system leaves, another always comes running into greet you. This time we were plagued by high winds. Pushing on, we continued up a high plateau, trying to find cover and a decent spot to camp for the evening. To this day I don't know how it worked...it didn't matter what way you stood, the wind was in your face. The wind was so forceful and aggressive that it tried to suck the air right out of your lungs. It was late, we were tired and both of us were windburned. We managed to find a mediocre spot for the night and, without much discussion, we setup the tent and unpacked our camp.

With the night’s last remaining light, we walked over to a rock outcropping and glassed for rams. We spotted a young ram and watched as he looked for a sleepy hollow to bed down in for the night. 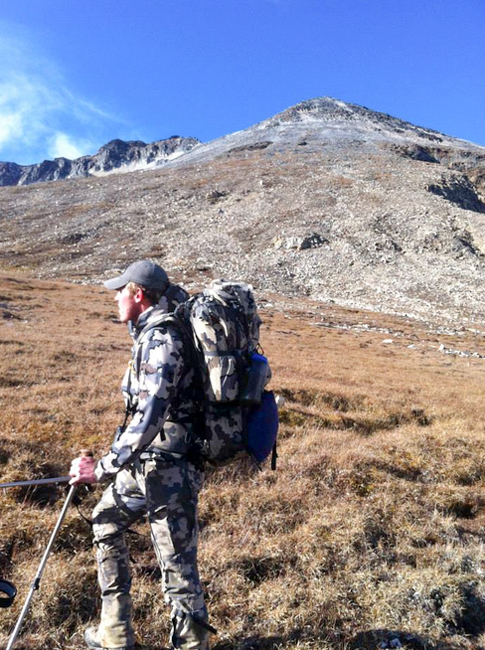 September 20, 2013 - The winds were back. We were once again barely able to breath and stand. Exhausted, we packed up camp and continued on, heading south. The next few hours became more of a struggle, and we found ourselves at times asking the famous question, "Why am I here?" But we decided to press on even though each step was more painful than the last. We were here for a reason. 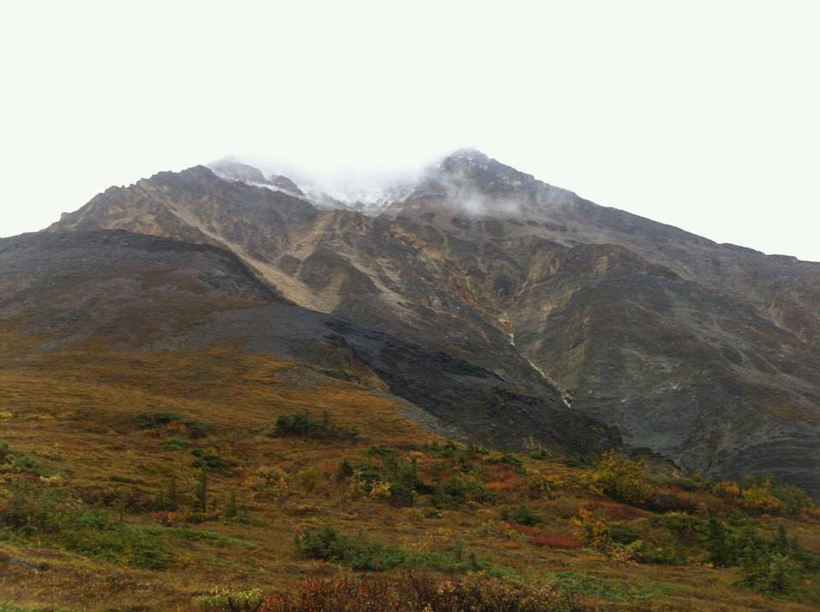 By mid afternoon, we came to a large deep valley. High above it, we decided to take the next few hours and glass for potential sheep even though the wind made this extremely hard and frustrating. Hiding behind a rock, I was able to keep the spotter somewhat stable so I could scan across the valley. Omer also scanned the valley, suddenly saying one of the best words we know: “Sheep!” There were two of them to be exact. I quickly turned my attention to him and locked my spotting scope onto where he was peering, locating the sheep that he saw. They were two young rams — a very good sign!

Minutes later I said, “Three!” Not a second later, “There’s one higher!”

Trying to focus the scope for a ram over two miles away with winds can be a frustrating challenge. I think hours passed until finally I saw what I wanted to see. “HORN! That was some HORN. Omer that deserves a closer look!”

Scrambling down the steep mountainside, I was taking strides fit for a long jumper. It felt like minutes before we were almost down at the creek bottom. Omer and I decided to dump the whole camp and go light and fast. 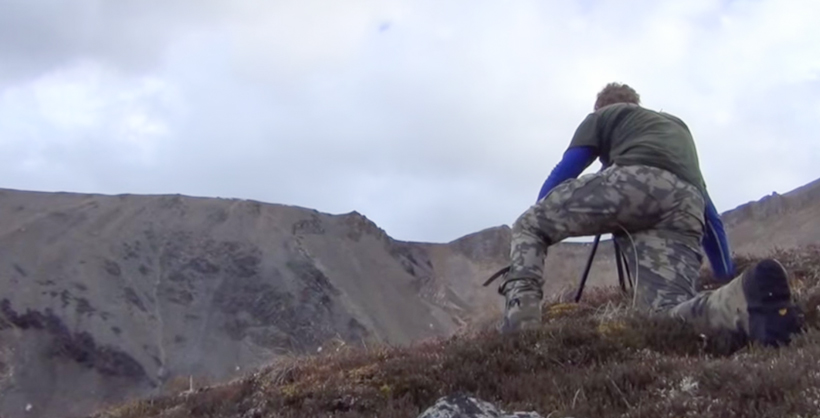 Making it to a high ridge that looked down into the bowl, I crawled up and peered in. There, 250 yards below us, stood the ram. Settling my spotting scope on him, I began trying to judge him in order to see if he was legal. It only took me a few seconds of counting the rings on the horn before I said, “... 1,2,3,6,7,8 ... Omer, he’s old!” 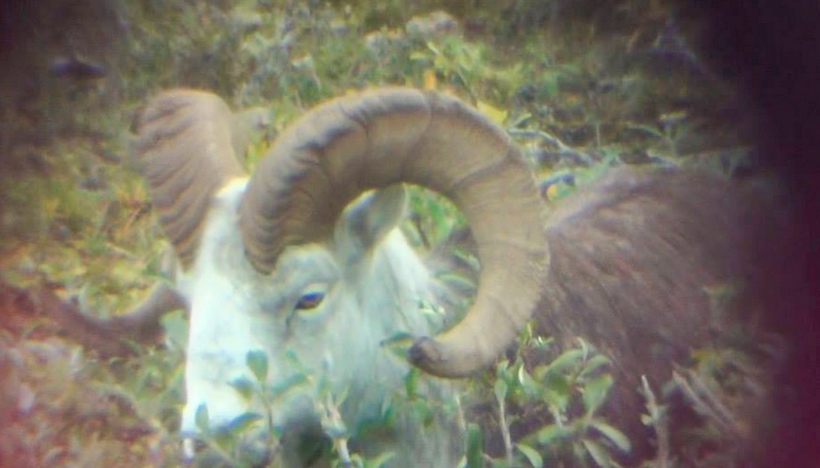 That moment....the rush of blood pumping, my heart bouncing against my chest, I laid prone with my rifle steadied, ready for the perfect shot. The thoughts that lead up to this exact moment pass through my mind, but with the flick of the safety and a last settling breath, everything paused. 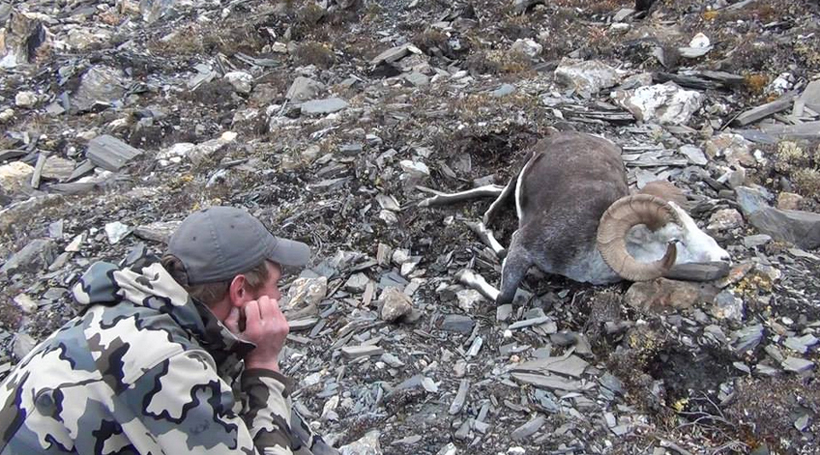 With the crack of the rifle and bullet in flight, the making of a dream became a reality. The ram did not go more than 100 feet before he collapsed to the ground. Not knowing what to do with myself, the emotions began to take control. I was elated. I dog piled on top of Omer and then started jumping for joy. A monarch of a ram lay in the rocks below me. After a few minutes to take it all in, Omer and I finally made the walk down to the ram. With every step closer, the ram got larger and larger. Finally kneeling down next to it, I grasped his horns and finally claimed my prize! 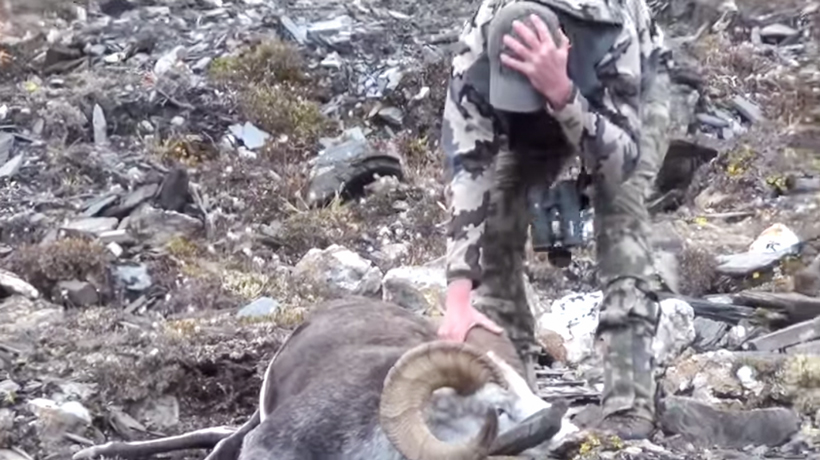 I could not believe taking the ram was true for the longest time. Everything I had ever dreamt about in a ram was laying next to me. He was an old, and heavy broomed, ram. 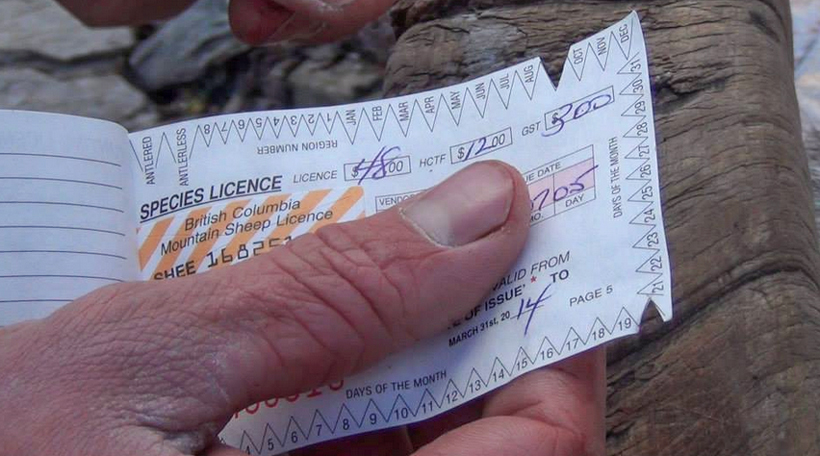 After counting age rings, I estimated him to be eleven and a half years old. Nothing gets me more pumped than harvesting an old mature ram. 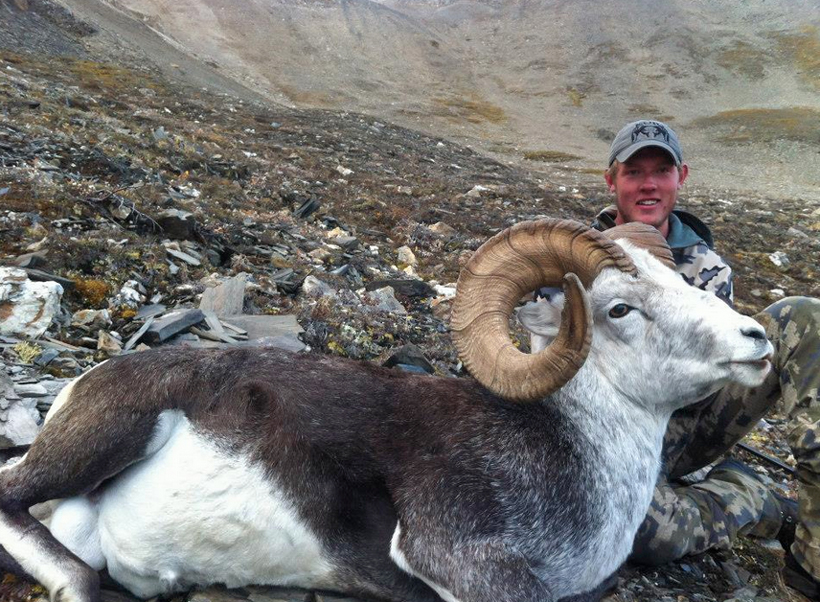 After many pictures and video, Omer and I made short work of the caping and butchering before starting our descent to the valley below to make camp for the night and rest easy after the day’s events. 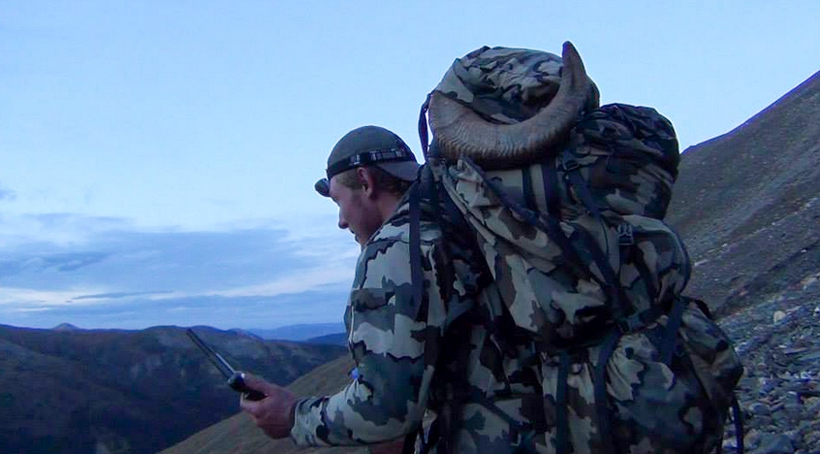 Everyone who has sheep hunted understands what happens next. Keeping it quick and simple, it involved one heavy pack for each of us and one heck of a long climb out of the valley, over the plateau and down towards the lake we first landed on. A long and exhausting 11 miles later, Omer and I crawled into camp, our legs absolutely destroyed. We laid motionless for minutes before we made any effort to unpack the packs and make camp for the night. 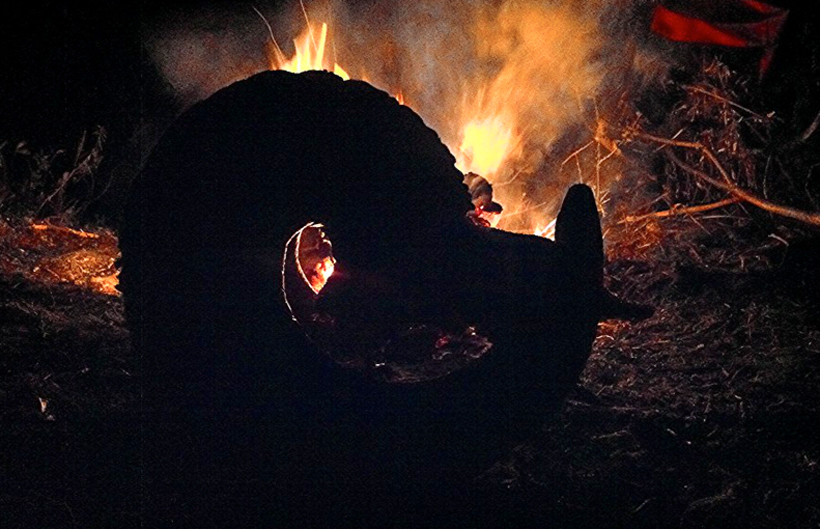 I do not think that I got much sleep that night. I woke up some close friends when I called them with the satellite phone, reliving the thrill of the day. 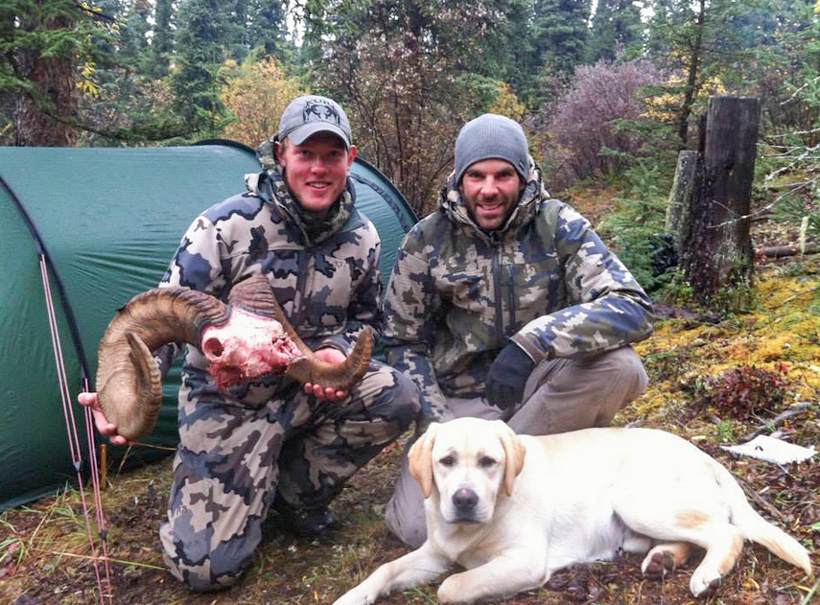 This will be a hunt that will stay with me for as long as I live. Every minute shared, every ounce of pain and every shout for joy will be remembered. There will never be a price that I can put on the memories shared in the backcountry. 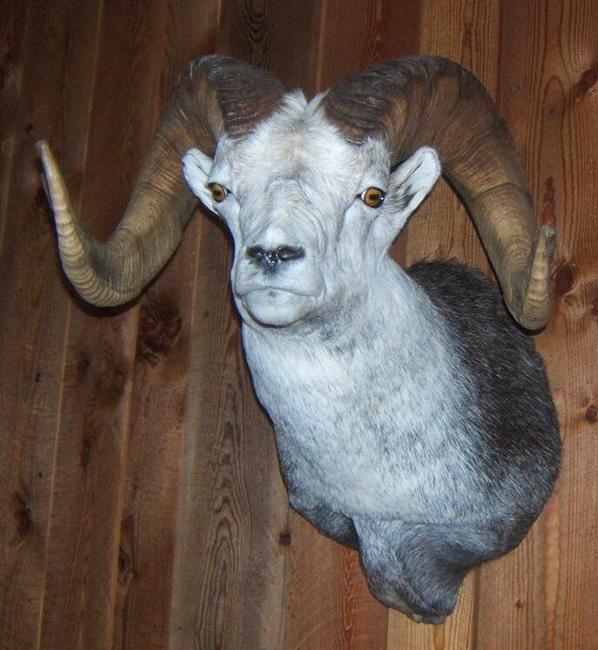 My deepest thanks to the guys who shared this hunt with me: Omer, Johnny and Garrick. Thank you! It was one to remember!

You can check out a self filmed video of Nathan's hunt below: