The power of Filtering 2.0 to find draw only bear hunts

Spring bear hunts are coming up fast! And there’s honestly no better way to kick off the dust that’s been collecting on your hunting gear than by going on a spring black bear hunt.

While there are a plethora of OTC options out there when it comes to black bear hunting, there are also some great draw opportunities. And most of the time, if you're already buying a hunting license to participate in the draw for other species, it's probably worth it to look into some bear draw hunts too. This article is a kick-off to a series on some black bear application strategy information. 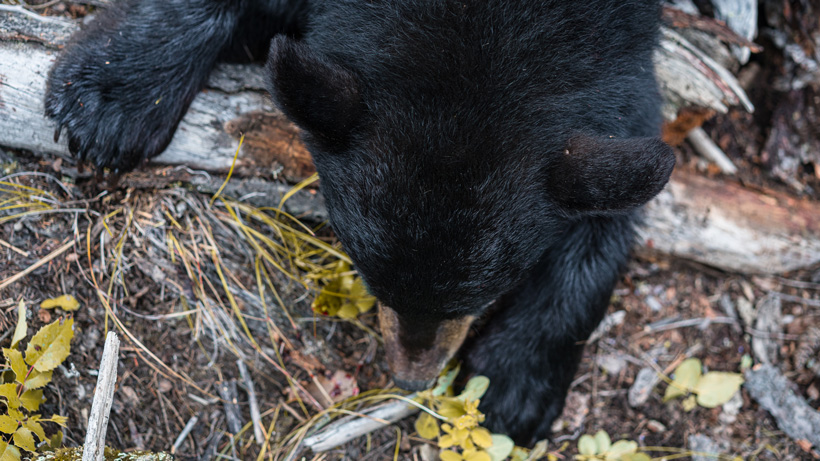 What follows are several ways to use this tool to your advantage.

Jump over to Filtering 2.0 and then select the state you're interested in, and then finally click on black bear. For this example, I'm going to use Oregon. 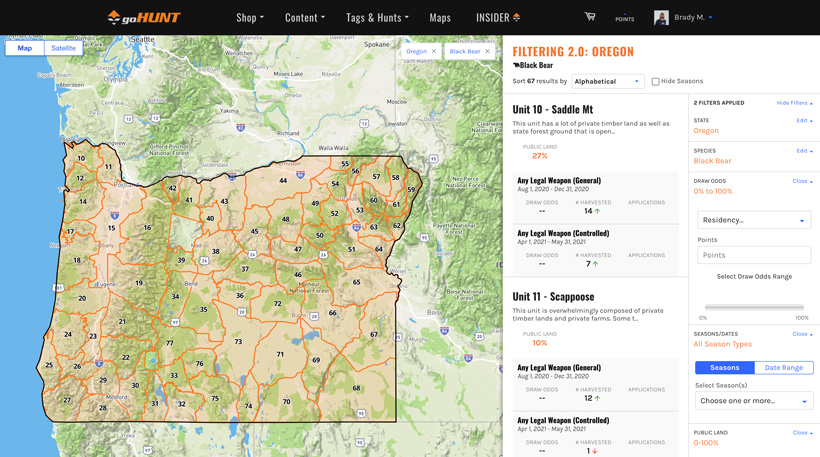 So now you'll see what have 67 total units. But if you're just starting out and trying to find a spot to hunt, that can be a little intimidating to sort through so many options. But luckily, Filtering 2.0 makes this process a breeze.

Since we are talking about draw hunts, we need to select our residency under the "Draw Odds" filter. I'll go with nonresident and then enter my points. I do have black bear points in Oregon, but I'll just enter a random number of points rather than give you my number. I entered in 1 point. I also kept the draw choice at "First Choice." 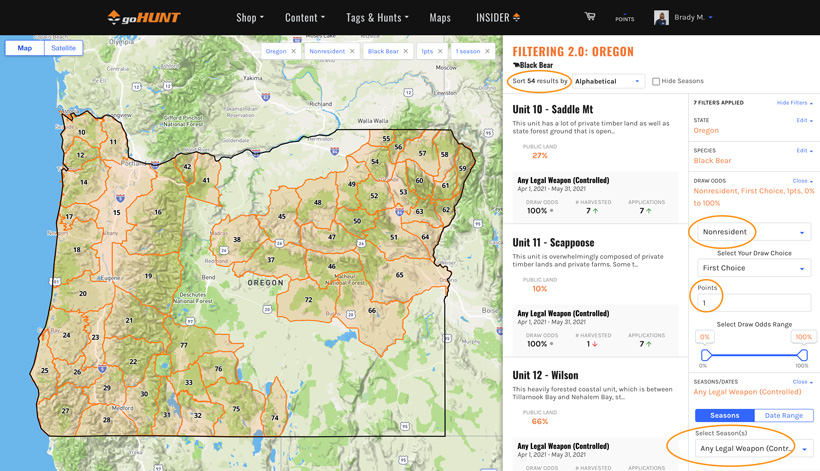 So in the above screenshot, I highlighted several things. You'll see have selected nonresident at one point and chose an any legal weapon controlled hunt season.

Breaking things down even further

From here is where you'll really dive in and start to narrow down some units.

There are several ways to do this. If you just want to see what units have the highest number of bears shot each year, then you can go up to the top of the page and where it says "Alphabetical" if you click that a dropdown menu will appear and you can select to sort by "# harvested." It's also worth noting that there are several other "sort by" options in this dropdown too.

Find hunts to draw this year

We all want to hunt. So using the "Select Draw Odds Range" filter is a great tool. This way we can quickly weed out hunts that we don't have a great chance to draw. I adjusted the slider to 50% and now we have narrowed down our results to 40 units. And if you decided to switch the unit list back to alphabetical, this could also be a great time to sort by some other options to see where the units shake out. 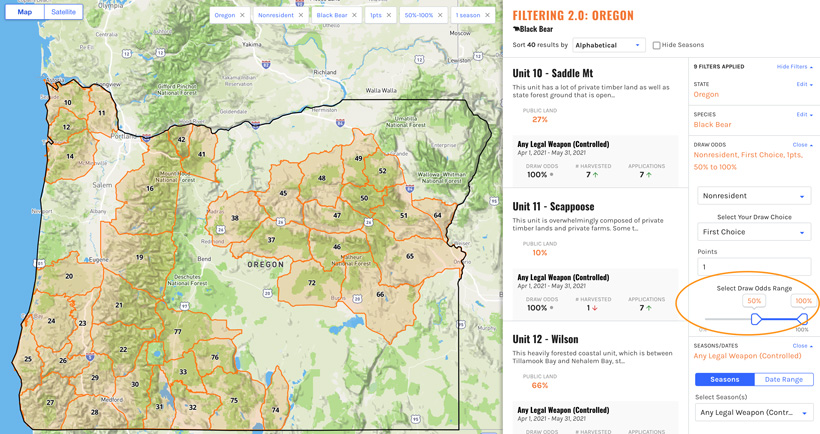 What to do with the 40 units we have left?

At this point, here is where I'd start to play around with several different filters. I might just go straight to the public land filter or I'll use the "Animals harvested" slider. 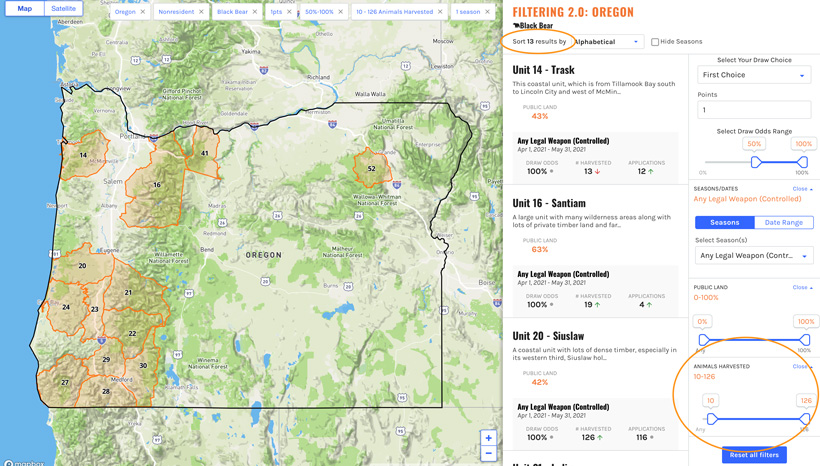 Using the animals harvested slider can paint a picture of where more bears are taken in the state, that being said, it could also just mean that there are a ton of hunters in the unit as well. I adjusted the number of bears harvested to 10 and the list of units went from 40 all the way down to 13.

This struck me as pretty interesting so I went back and clicked on several of the controlled units that fell off the list. The majority of those units fell off after the slider went about 4.

This is when checking out more data on Unit Profiles can come into play and is when I like to look at the bigger picture as a unit with somewhat low harvest success might not be that bad if there was a small number of hunters surveyed/tags allocated. So the harvest success could be higher. For example: on one of the units I clicked on, in 2019 there were 751 residents and 19 nonresidents who hunted Units 37, 38, 45, 46, 47, 48, 50, 51, 65, 66, and 72. And for the unit I selected, there were only three bears killed in 2019 (2020 harvest survey data isn't out yet). And if I considered all the low amount of bears killed in the surrounding units... it definitely seemed a chance of taking a bear in one of those units would be very difficult, unless you were a resident who was able to scout/hunt it a bunch or had some really great local intel.

Now what to do with the 10 units we have left?

You'll notice some red and green arrows on Filtering 2.0 next to certain numbers.

From here you could also filter by Public Land percent and again, sort by the number of bears taken.

Moving on to maps

Finally, once I have found a few units I like, now would be the time when I'll jump over to goHUNT Maps and really hone in on where exactly the public land is located. Is that public land in terrain that looks like it could hold a bear? Or does the terrain in the unit look like it could be conducive to glassing? All of these questions need to be thought of when deciding what unit to apply for. A unit might have a bunch of public land, but a good chunk of it could be terrain that isn't worth your time.

Or on the flip side, a unit can still be phenomenal even with a low public land percentage. Even with a low percentage of public land, that could just mean there is a bunch of farmland down below or a city that skews that number, but the public land could be phenomenal. Then one more scenario, for example in Oregon beyond the true public land, there is also a lot of private timber companies that are open to hunting. Just some things to consider when you look at all the data in front of you.

While on the subject of maps, you can't fully research for a spring bear hunt without the use of 3D maps! It would be crazy to add up how many hours I pour over 3D maps when looking for a unit to apply for or even to do some digital scouting.

While it might seem like a daunting task when trying to find a unit to apply for when it comes to spring black bear, with the tools on INSIDER, this process is a lot easier! Filtering 2.0 is going to be the powerhouse research tool that will allow you to quickly narrow down your options for draw or over the counter bear hunts. Jump over the Filtering 2.0 and start your black bear research today.