The question everyone’s thinking… what Colorado season to apply for in 2021 for mule deer? 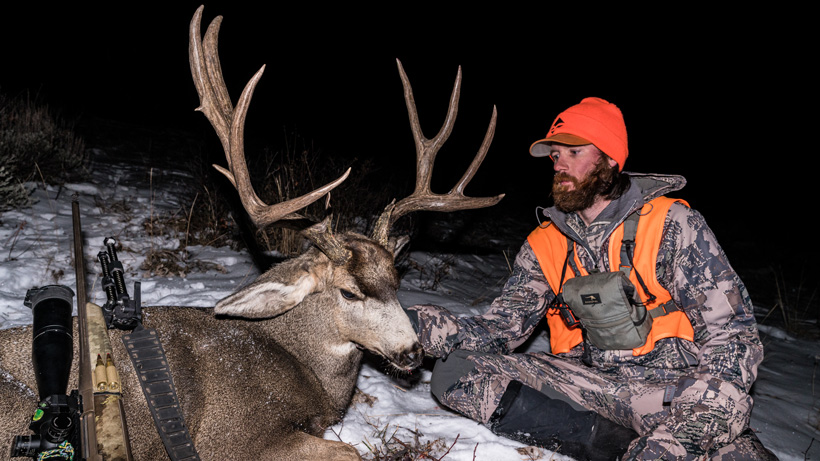 The highly anticipated 2021 season dates in Colorado for mule deer are upon us. What makes this year a “highly anticipated" season is these are going to be the latest rifle season dates that have been offered, with the dates pushed deeper into November. As you might recall, back in July of 2019 I wrote an article outlining these season date changes.

The application deadline for all Colorado species is 8:00 p.m. MST on April 6, 2021. You can apply online here.

Everyone wants to know how the 2021 Colorado deer draw will unfold and almost most importantly how the hunts will go. What will happen to draw odds? How will point creep come into play? Will people who have been building up points for so many years jump into the draw? Will high point holders switch units or even switch seasons? And ultimately, the biggest question is how will these late-season dates impact the actual hunts?

These later rifle season dates are pushing into prime rut dates in 2021, these dates could tip the scales and allow an old mature buck to drop his defenses in search of a doe to breed. And if Colorado experiences cold weather and some snow, it could be a banner year for mule deer in this state.

We’ve had a lot of discussions about this at the office and through talks I've had with Trail, he agrees that the dates will never be better for a late season mule deer hunt in Colorado.

If you haven't had a chance to check out the 2021 Colorado mule deer application strategy article, Trail outlined a very important section that lines up exactly with my thoughts too.

Below is the excerpt from the application strategy article:

Going into this draw, we anticipate that point creep will be magnified for most second and third rifle hunts, but the primary focus is going to be on the third rifle season.

Here’s an example: for a nonresident, the third rifle season in Unit 15 had 30% odds as a second choice. The fourth rifle hunt in Unit 15 required four to five points. With third season dates being what has historically been fourth season dates and third season running eight days instead of five days (like fourth season), we anticipate that what has been a guarantee draw with no points will very likely take two or three points in 2021.

Our best estimate is that there will be a significant amount of transition from fourth season applicants into third season. There is also probably going to be a good number of “point bankers” jumping into the draw this year. I believe that most third season hunts that have 200 to 300 licenses available could jump two to three points and possibly more. If you are set on a third season hunt, I would look for hunts where, at a minimum, you have two points more than required.

The second rifle seasons are also going to creep, but how much is more of a guess. A good number of applicants with one to three points who may have been looking at a third season hunt normally will now be applying for second season. In a similar manner, most second season rifle hunts are going to creep one to two points. The second season dates are still good and those hunters will get a chance at bucks earlier in the season.

The fourth rifle season hunts are intriguing. We anticipate a lot of movement from fourth season applicants to third season. It’s possible some hunts may not creep and odds actually could get slightly better. It’s very hard to say, applying for a fourth hunt is going to be more of a gamble this year and, the reality is, there are going to be a significant number of bucks killed already during the second and third season. Even still, fourth season will occur very late during what is the heart of the rut. Undoubtedly, there will be some true giants that slip out and slip up on fourth season hunts; however, it’s a gamble both in terms of odds and opportunity.

The muzzleloader and archery hunt odds are probably not going to be impacted and trends should be much more predictable. Archery and muzzleloader hunters tend to be more specialized in the experience they are looking for. If you are an archery or muzzleloader hunter, the detailed draw odds page for the hunts you are considering are still going to be really valuable for you.

What you have just read, lines up exactly with my thoughts with these late season rifle dates. This season is for sure going to change the way people apply. While we don’t know the exact quota’s for this year, but if we assume they will be the same as last year, that would mean a great number of people hunting later season dates in the rut. More late season tags could equal potentially more deer killed. Trail and I also agree that with the season structure changes, the next several years has the potential to negatively impact the buck:doe ratios and the likelihood of killing a trophy buck. But that just means that those that want to be successful will continue to put in the required work.

The time is now to dive in and check out your mule deer options. Utilize the tools on INSIDER to help find a unit and season you'd be happy hunting.

A quick overview of the season dates and thoughts

For 2021, you have a second rifle season, that will take place a full week later than in years past. These dates are very close to what the previous year's 3rd season dates have been. And while tag numbers are not set yet, if they continue to offer the typical second season number of tags, you’ll have a lot more people in great season dates than what was offered on these dates when they were “3rd season dates.”

What I also find interesting, the second season now has an increased chance of potentially being impacted by weather. This can be a good or a bad thing depending on how you look at it. As you now have a better chance at some heavy rut action.

The third season did get shortened from a nine day season to a seven day season in 2020. And for 2021, 3rd season will also be pushed later into November on what was historically a fourth season date.

I definitely believe that a lot of high point holders could switch things up and apply for a 3rd season tag because they might be tired of waiting for a 4th season tag, and with the late dates, they will jump around and potentially look for that opportunity they were always chasing. Plus, with a seven day season on these dates, that gives you extra days to find a giant buck over the fourth season hunts they might have been trying to draw in years past!

There is the possibility of significant point creep in the third season mule deer hunts, which is pretty much a given considering the hunt dates. The third rifle season has the potential to be phenomenal; however, if you are considering applying for one of those hunts, it might be worth giving yourself a couple points buffer when looking at units. A unit that took one point in 2020, might take two or three in 2021. Some quality hunts could be found by expanding your search into lesser known units.

With the fourth season rifle hunt occurring during the core of the rut, it could be the hunt of a lifetime and it might be worth high point holders to continue on their path and apply for this coveted hunt!

What will the season dates do to draw odds?

In all honestly, it’s a crapshoot. People have been saving up points for many, many years. And since the 5-year season date structure was approved in July of 2019, people might have changed their application strategy back then and could have started to bank points. And all those people who have been waiting and waiting… might finally decide now is the time to apply or even change what season they apply for.

What you can see in the table above is the trends in people who haven't really been impacting the draw, but could jump in this year and impact odds by applying for a unit at their point level.

Again, if you're considering a hunt that has typically taken a few points to draw, the people who have been banking points are most likely the people who could sway the draw if they decide to enter the draw this year as they will probably be chasing some easier to draw units.

One thought I’ve had recently is if some units will experience more crowding due to these late season hunts. Even if tag numbers are the same, it is very possible that the later we get into November, you could have more deer migrating out of the mountains, doing so puts them closer to private property. This push to lower elevations might mean that more and more hunters have to hunt the lower zones. This will be especially true if some of these late season hunts experience more snow which also limits how much people can get around. And with bucks and does closer or locked up in private, it could be difficult to find places to get away from pressure easily as these season dates push into November.

After all that said, it’s about time to toss my application in the mix and for us all to see how the draws play out. It will be a very exciting season! It’s always interesting to talk with a bunch of people about their thoughts on these changes. I’m interested in seeing how the next years pan out with these very late season dates in Colorado as we will still be on the approved 5 years season structure.

Overall, I definitely think that people are dumping their points this year. Also, would the thought of more people applying for a 2nd, 3rd or 4th season tag, make it a little better chance to pull a decent muzzleloader tag?

At the end of the day, all we can do is hope for the best and plan/research for the worst. It also might not be a bad idea to examine the harvest success values of different seasons to sort of gauge what you might experience in a particular unit due to all the season dates getting pushed later into November. Before you apply this year, dive into goHUNT's standalone Draw Odds, utilize the filters to find a hunt on Filtering 2.0, analyze the data on Unit Profile and then switch over to goHUNT's 3D Maps to really hone in on the terrain and public land to find a unit that might be a hidden gem!

Best of luck in the draws.