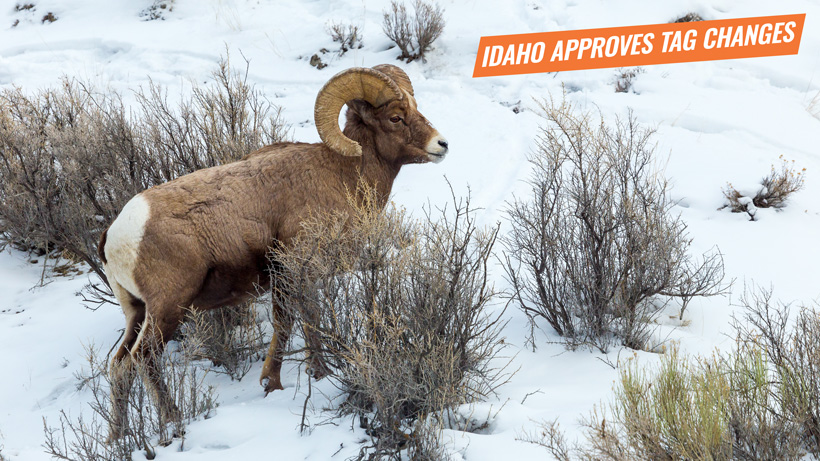 Back in December, we covered the proposed changes Idaho was making to for the 2019/2020 season. You can check out that article here. Recently, during Idaho Fish and Game's (IDFG) annual meeting on January 24, IDFG approved changes to the moose, bighorn sheep and mountain goats hunts for the 2019-2020 season.

In summary, there will be a reduction in the number of moose tags, increase in bighorn sheep tags, and a decrease of mountain goat tags.

The following tag changes will be reflected in their new regulation booklet that will be available mid-March (available online prior to that timeframe). The application period for moose, bighorn sheep and mountain goat controlled hunts is from April 1 through April 30 and is entirely online. A 2019 Idaho hunting license is required to apply. New fees for application are $16.75 for residents and $41.75 for nonresidents.

As always, any time there are changes to tag quotas, this will impact Draw Odds. A lot of the decrease in hunting opportunity stems from big game populations changes, decreased harvest success, and disease.

According to IDFG, statewide, there will be 99 bighorn sheep tags available each year in 2019-20, two more than in 2018. The statewide net increases in Rocky Mountain bighorn ram tags were offset by a decrease in California bighorn ram tags.

If that's the case, I'd imagine there will be some unclaimed tags from successful applicants. Any plans on how Idaho will distribute those?

The odds for non-residents are less than a high-school football player being drafted into the NFL (no, this is not an exaggeration): https://blog.eastmans.com/what-are-your-odds-really/

I'm glad I dont apply for those.