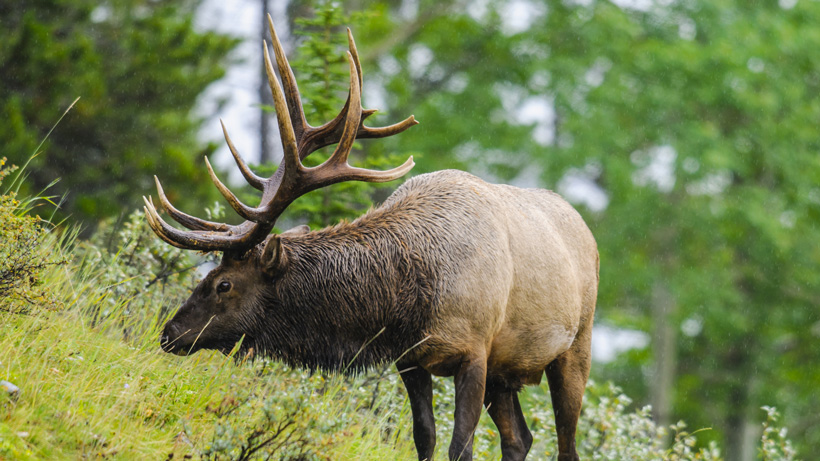 When you think about elk hunting — especially trophy elk hunting — your mind instantly goes to Colorado, Montana, New Mexico, Arizona or one of the other prime Rocky Mountain elk states in the West. These states have massive herds of elk and a major allotment of tags for hunters, which provides unreal opportunity. Yet, many hunters would rather go on a hunt with less people, high harvest statistics, high trophy potential and a chance to hunt elk in the east coast. So I will ask: for a small annual investment, would you enter an elk lottery for only $11.90 for the chance? Would you be interested in hunting a unit east of the Mississippi river where you could potentially harvest a 350” bull? Would it spark your interest if I told you that, if you drew a tag in this eastern unit, your harvest success rate would be over 98% for a bull elk? Would you be interested in looking into and applying for that unit? For hunters who have figured it out — all of these speculations are true for hunters who draw an elk tag in the Appalachian Mountains of central Pennsylvania. While goHUNT is a Western hunting company, I thought it would be fun to take a quick look at other options when it comes to elk.

Note: The application deadline for Pennsylvania elk is July 31, 2020. You can apply online here.

As of 2019, Pennsylvania now has three elk seasons which are archery, general and a late antlerless season. Since 2003, there has been a lottery with a bonus system in place, meaning that for each year you apply and are unsuccessful you will have another name in the electronic “hat” and, every year, you have a chance. All of these seasons are drawn separately and, if drawn, you only reset your points for the single season. Prior to 2019, there was only one general draw in Pennsylvania so if this is your first year applying you would have an extremely limited chance to draw; however, you still have a chance. If there was ever a time to start putting your name in for an archery or late season hunt now is the time. I say this because applicants who archery hunt or are interested in the late season tags will be at the top of the draw odds for these seasons since 2019 was the first year allowing applicants. Essentially, your odds would be much higher for archery or late season if this is your first year applying for all licenses.

This year, the Pennsylvania elk draw requires you to submit your application between mid-June and July 31. They will then draw licenses for the three seasons in August 15 during a live elk festival in Benezette. Hunters can apply for antlered only, antlerless only, either-sex or point only. If you are just looking for an elk experience, then the antlerless only has the highest chance to draw a tag. Overall, the cost to apply for the elk draw is way less than other states. The Pennsylvania Game Commission allows hunters to apply for an elk license with or without a hunting license, which only costs around $102 for nonresidents. The application for each of the three seasons is $11.90 per season. Essentially, for around $35.70, you can get in the lottery for all three of the elk seasons, which, compared to most western states, is a steal. Where can you find a better deal than that nowadays? Though your odds of drawing a bull elk tag are low, you still have a chance so why not take a risk?

Pennsylvania elk encompasses 11 hunting units and, unless you are familiar with one over another, they all have elk and good opportunity. If the allotment of tags is gone for the unit you chose, you will be given the next unit available so there is really no wrong choice. The terrain is mountainous with elevations ranging from 700’ to 2,500’ in elevation. The forests are thick with open pipelines, food plots and fields, allowing plenty of forage for these large animals. There are also many guides available who usually have some of the biggest bulls patterned by the time the season starts. If you are lucky enough to draw, hiring a guide might be your best bet.

Though you may not think of elk in the East, in states such as Pennsylvania, they are there and in good numbers. And, if you draw, your odds of harvesting a mature bull are the best out of any state I have seen. Considering the small monetary investment to apply and the high trophy potential, it seems like an easy decision to apply annually. This summer why not try your luck and see if you can draw an elk tag in Pennsylvania? You never know — you may be headed east instead of west for elk season after your first year applying.