21 elk drown after falling through ice 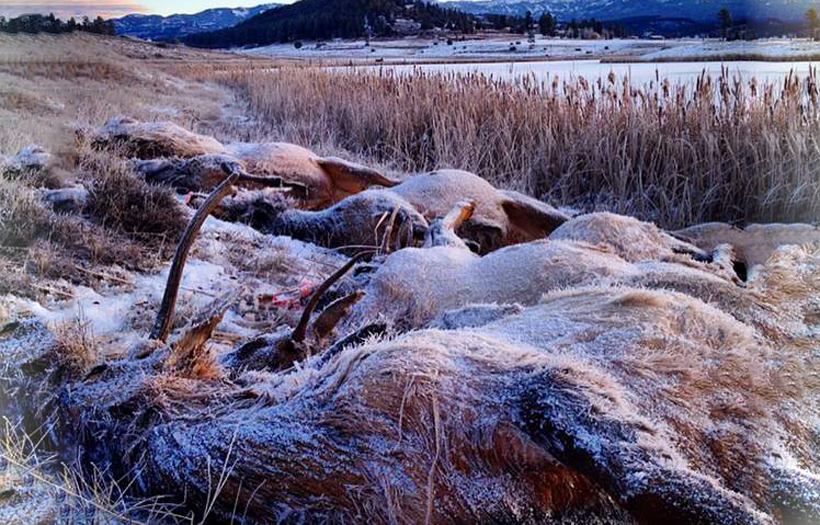 Twenty one elk drowned after the ice broke under their weight last weekend, plunging the entire herd into the icy water only 50 feet from the shore. Officials believe that the incident, which happened in Echo Canyon Reservoir about five miles south of Pagosa Springs, Colorado, occurred Sunday night.

Residents alerted authorities early Monday morning and Colorado Parks and Wildlife officers worked into the evening to remove the elk carcasses from the water before it froze. The carcasses were taken to a landfill Tuesday.

“It’s kind of surprising none of them got out,” says Joe Lewandowski, a spokesman for Colorado Parks and Wildlife. “That’s what happens when you get several thousand pounds on the ice.”

While drownings like these are not a common occurrence, there have been other incidences in recent years. In 2011, officials had to remove three cow elk that had fallen through the ice at a private pond near Pagosa Springs and one elk died in that incident; in 2008, 19 elk drowned when they fell through the ice in Paonia Reservoir in Delta County.

"It doesn't happen all the time or very often, but it is a natural occurrence," says Matt Robbins, a spokesman for Colorado Parks & Wildlife. "There were just too many of them for the ice to hold."

The combined weight of the animals compromised the ice, causing it to splinter which resulted in this unfortunate drowning. Officials warn that elk are large animals and can weigh anywhere between 300 to 1,000 lbs. No one should ever attempt a rescue of big game on ice or water.