Fred has been involved in archery since he was a young man. He has successfully harvested numerous trophies with his bow from all over the world. He has also completed the Super Slam taking all 29 North American Species with his recurve bow. His past work experience includes working for Bear Archery, managing Arrow Dynamics one of the largest archery pro shops in Colorado, and working as field operations manager of Dart International (the video hunting simulator). Currently, as a full-time outfitter/guide, Fred's other interests include hunting, writing, photography, and videography. He has had articles and/or pictures published in Bowhunter, Bowhunting World, Traditional Bowhunter, Outdoor Life and North American Hunter magazines and has released Traditional Harvests I , II and III, IV and Traditional Harvest V. These DVD's highlight traditional hunts for antelope, bear, deer, mountain lion, boar, sharks and stingrays, caribou, elk, javelina, bison, muskox, grizzly, polar bear and turkey. Look for Fred on the Sportsman Channel on Easton Bowhunting TV with Host Fred Eichler and Predator Nation. Michele Eichler was the CEO of Muzzy Products Corp and has worked in the archery industry since 1984. She has been the longest standing board member of the Archery Trade Association and currently the only women elected to the board and voted Chairman of the Board. Michele is also a member of various bowhunting organizations including the Pope and Young Club, Colorado Bowhunters Association and other state organizations. Michele has been been hunting since she was 12 years old and has taken 11 different North American big game species and 6 African species with her bow. 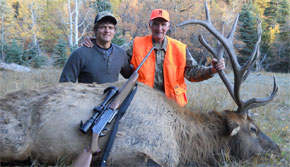