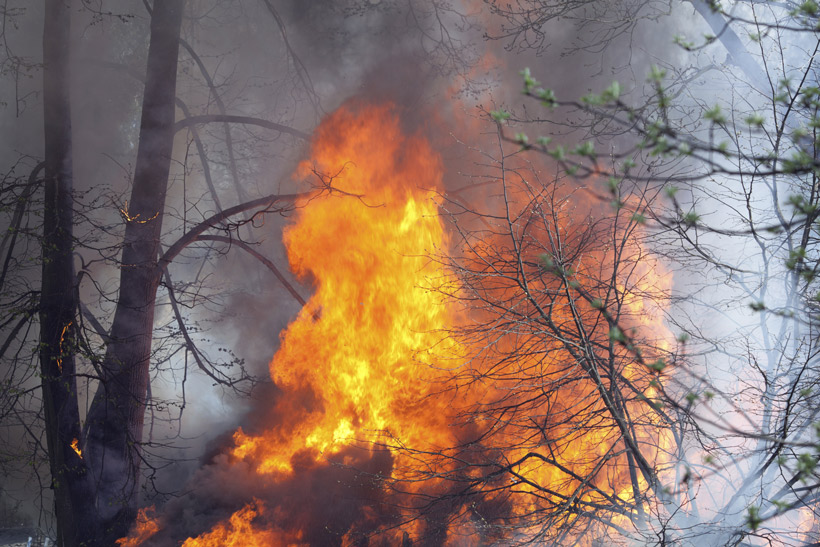 Wildfires often portray images of death and destruction — roaring flames, billowing smoke, blowing ash. They tear across the land, wreck hunting season, blaze through containment lines and force both people and animals to flee their homes.

Yet amidst such devastation, there's hope. As much as it would seem that wildfires have catastrophic impacts on wildlife, scientific studies and anecdotal evidence indicate quite the opposite. As it turns out, fire does not always negatively impact wildlife populations. Wild animals respond and adapt to fire in a number of ways, and it's well known that many species actually benefit from wildfires.

Are wildfires impacting big game movements in your area?

Wildfire's hit when you least expect them. You might have finally drawn a tag after 15 years of applying and then a wildfire hits your unit. Below you will find ways to track wildfires in Google Earth and some information on their impact to big game populations. 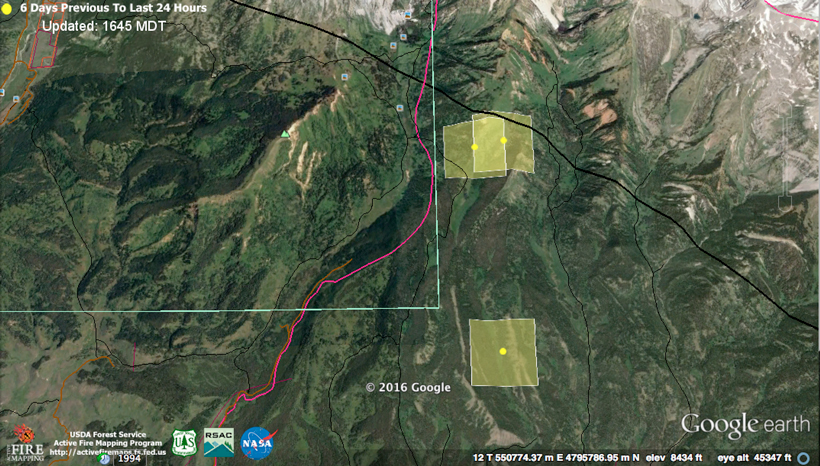 This year we have seen another round of destruction from wildfires. Recently, wildlife officials in California are weighing in on the impacts these have on mule deer and their habitat. We've also seen major wildfires in Wyoming's Region H, Colorado's Unit 161, Montana wildfire in HD 122, Idaho's Unit 33 and Unit 39 to name a few.

Wildfires have been a major factor shaping landscapes and influencing productivity throughout North America for thousands of years. And wildlife communities have evolved accordingly, developing various ways of avoiding or escaping fire and adapting to the post-fire environment. Animals, like people, know all the ways in and out of their homes and react accordingly to a fire. Luckily, most animals escape wildfires. You also need to use fire data to plan for your hunt if a wildfire breaks out near your hunting area. 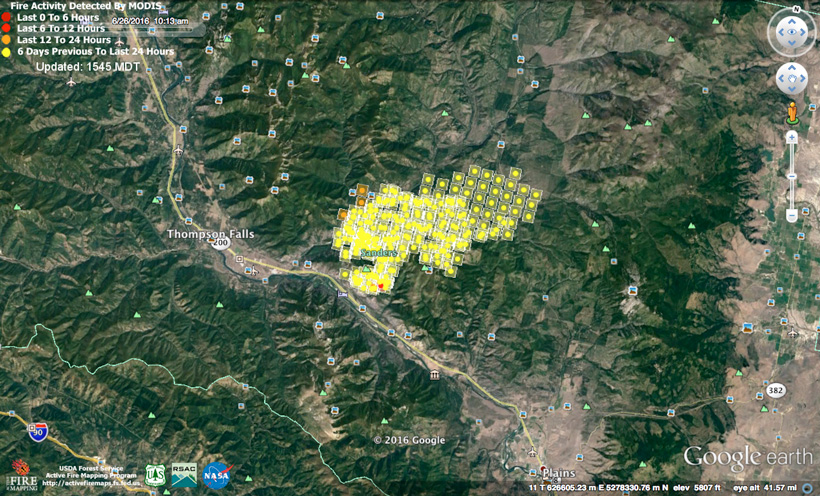 Screenshot of a Google Earth layer for tracking wildfires in your hunting area.

Nothing's worse than a fire in your hunting area or arriving at your trailhead only to find out that your hunting area is still closed due to past fire dangers. If there is or was a fire in your hunting unit... you'll need to do some additional research before the season opens. I'm always on Google Earth scouting before my hunting season and one of the best resources for a hunter looking to get a fire update before their hunt is to download Google Earth KML fire layers. These KML layer show active wildfires all across the US and all KML layers for wildfires from the Forest Service are automatically updated to ensure availability of the best and latest information. You can zoom in on the highlighted layer and see when the previous update was made and where the fire is spreading. These layers are available from the Forest Service or GeoMac. 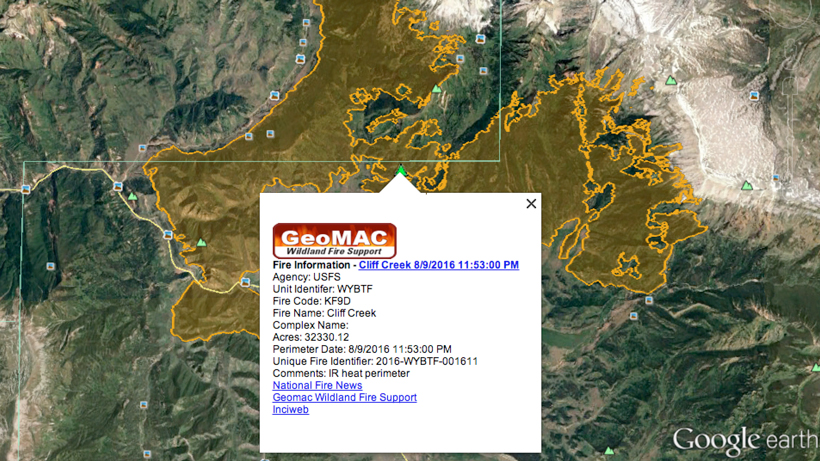 I really like GeoMac's version because of the Polygon layers and the additional information that can be found about the wildfire.

Another tool would be to use Incident Information System. I use this more for detailed information on the fires in the West and to figure out fire closures. It really doesn't help much in mapping out the fires, especially since I do all of my scouting on Google Earth.

Hunting near fires and the dangers of smoke

Back when I lived in Montana a few wildfires were near my hunting area. I honestly didn't think much of it at the time. While the fires were not going to have a negative impact on my hunt and were not posing a safety risk... I was at risk due to smoke. I woke up one morning to my basin socked in with smoke. The smoke was so bad that I experienced some periods where it seemed to be hard to catch my breath and I was starting to cough. I used an extra shirt around my mouth to hopefully filter out the smoke particles. Luckily for me, the wind eventually changed and I wasn't blasted with smoke, but I have a feeling like I probably would have needed to switch locations soon or deal with consequences to my health.

Exposure to smoke can quickly result in sore eyes, and coughing and can cause more serious lung problems the longer you are exposed. 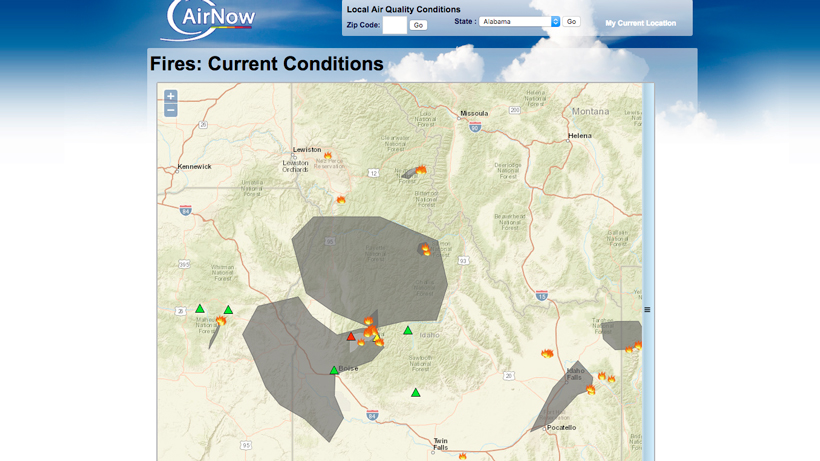 If I'm hunting near a wildfire, I now check out the Air Quality Index. You can view real-time smoke monitoring here and air quality information here.

Impacts of wildfires on big game 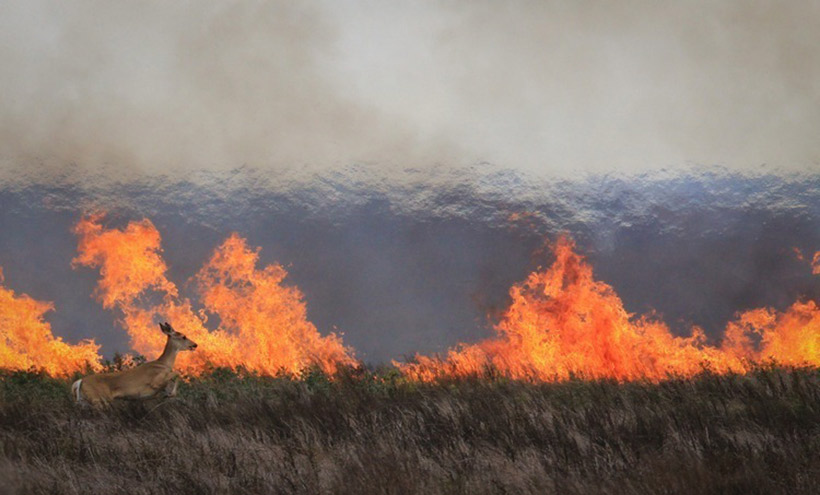 A deer makes a quick escape to avoid the flames of a local wildfire. Photo credit: Jeff Adams

Since large mammals, such as deer and elk, depend on vegetation for forage, bedding, cover, and thermal protection, they are forced to abandon burned areas if the fire removes many of the habitat features they need. One problem that arises with displaced wildlife is that population densities increase in areas with proper habitat features. This leads to increased competition for available food and water, often forcing animals to seek refuge in communities and subdivisions, creating conflict with people. 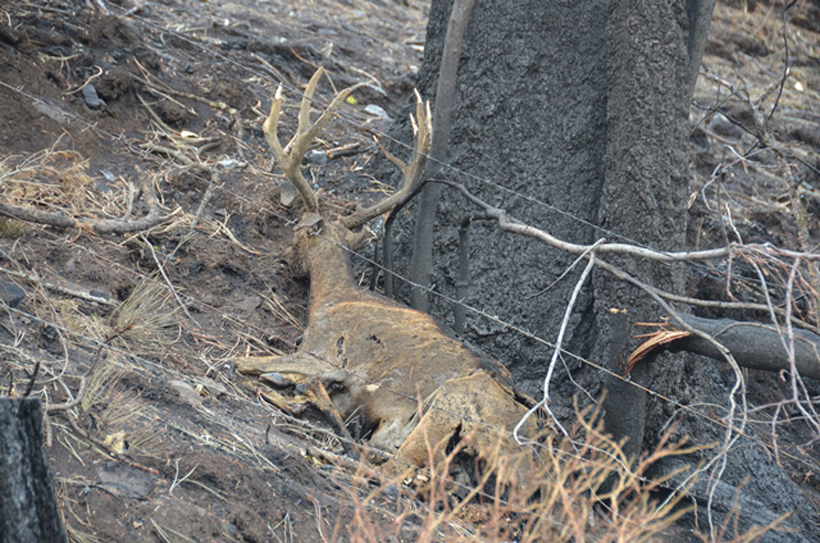 When there is not ample range for the animals to migrate to, mortality increases. A great article can be ready by Wyatt Betchel about the 2015 Canyon Creek Complex Fire in Oregon. In August of 2014, the Carlton Complex fires — the largest recorded wildfire in Washington state history — nearly 100,000 acres of winter range deer habitat was lost. This area is critical to the local deer and the 10,000 mule deer that migrate from the Cascades. Without enough cover or food to survive the winter months, and without anywhere to migrate, the deer are likely to perish during the hard winter weather. To prevent massive dieoffs, the Washington Department of Fish and Wildlife Department was forced to take steps to reduce the size of the herd. One such measure was the increase in antlerless deer permits during that hunting season. 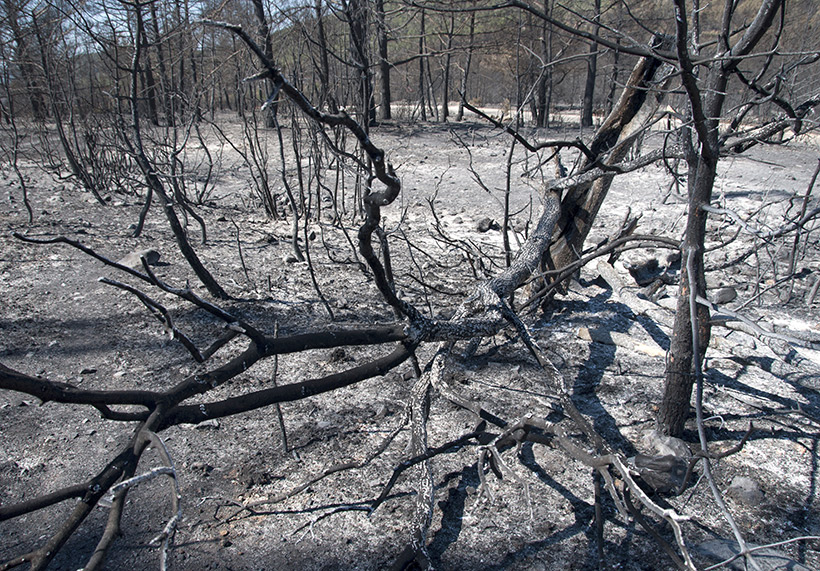 However, if a recent burn provides some, but not all, habitat requirements for a species, the animals may stay near the edges of a burn. The scorched land often becomes a perfect new home for animals. A cycle begins, perhaps lasting decades or even centuries, until the forest grows back and the burned-out animals return. Generally speaking, plants and animals that prefer open fields, nutrient-rich soils and sunlight will benefit soon after wildfires. While animals that prefer deep, dark, damp forests must move on or remain on the fringes. Mule deer and elk will often take advantage of the fresh vegetation. The nutrient-rich ash acts as fertilizer for the new plants. The new plants often have more flavor because of the nutrients; because of that, the plants absorb more water and become more filling. 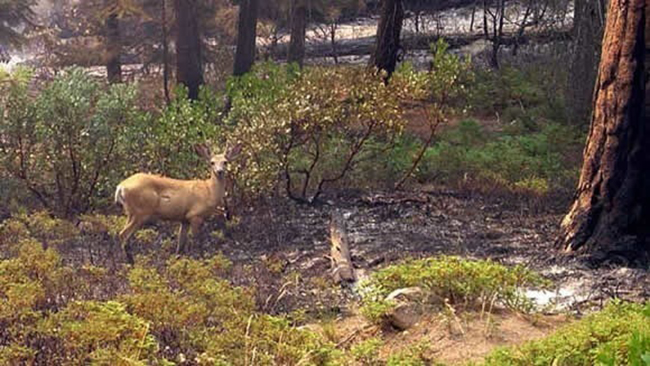 Keep in mind that the return of animals to post-fire areas also attracts predators. Predators take advantage of post-fire environments in which their prey do not have the usual coverage to hide and become easy targets. This is especially true in areas of Idaho, Montana and Wyoming where wolves are present.

In the long-run, wildfires can have many benefits for the overall forest as well. Most fires will leave islands of trees, can sterilize the soil, and even open up some areas for sun and moisture to help the re-growth. Mule deer populations in chaparral burned by stand-replacing fire often increase, benefiting from the increased availability of browse. Fawn production also tends to increase in the following years. Most other ungulates, such as elk, whitetail deer, and moose, either respond neutrally or positively to post-fire changes in habitat.

The population of large carnivores changes little in response to fire, but generally speaking, these animals tend to thrive in the long-term. Fire has even been recommended for improving black bear and grizzly bear habitat.

Many scientists also believe that fires may indirectly reduce disease rates in large mammal populations. Following a stand-replacing fire in spruce/lodgepole, pine and bunchgrass mosaic in Glacier National Park, Montana, bighorn sheep were shown to disperse, which may have helped reduce lung-worm infections in the population.

In the end, some animals will invariably perish from the flames. For the most part, though, direct and indirect mortality due to a wildfire is rare. Fire is part of the natural cycle in the world of wildlife and animals are resilient, well-equipped for survival. They adjust, rebuild, and in many cases, thrive.

The next time you see a wildfire and are inclined to think of only death and destruction, remember that new (and sometimes stronger) life emerges from it. Don't get discouraged if a wildfire tears through your hunting unit, all is not lost and most of the time animals will be back in the general area before the hunting season. If a fire is in your unit, keep tabs on the fire status through the Forest Service or other resources mentioned above. Sometimes re-growth can happen the same season.