Tick awareness and prevention for hunters 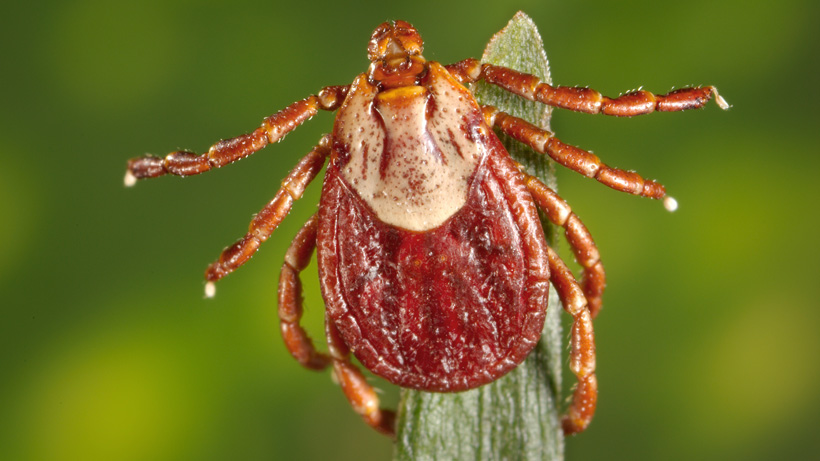 With an estimated 899 species of ticks world-wide—and over 90 different types within the U.S. —the odds of coming across one of these pesky parasites during a hunt are pretty high. While certain ticks are incredibly problematic for large ungulates—and have led to a massive decline in moose within New England and British Columbia—only a handful of tick species actually harm humans.

“There's many species of ticks that hunters will never come across or they may come across extremely accidentally, depending on what species they're hunting, but they're not problems for people,” says Erika Machtinger, an assistant professor in the Department of Veterinary Entomology at Penn State University. “Those that do cause problems for people include seven specific types.”

(See the chart below for a breakdown of type of tick, where they are most commonly found and the type of disease they transmit.)

Because ticks are active year-round –especially if you live in a warmer climate—it’s important to know where ticks tend to congregate. They are most often found in places where long grasses tend to grow. This is because they like to crawl up vertical surfaces and wait for either an animal (or human) to walk by.

“They do something called ‘questing,’ which is kind of adorable because they kind of sit there with their legs outstretched hoping that something comes by,” says Machtinger.

She points out that more mature ticks tend to climb higher to target larger animals like deer while younger ticks quest on shorter grasses more suitable for attaching to mice or chipmunks. While the likelihood of coming across a tick in brushy, long grass is higher than if you’re in a forest with no understory and a high canopy, that doesn’t mean you are entirely in the clear.

“The lone star tick is what we call an ambush tick,” says Machtinger. “They take cover under leaf litter because that way they can stay humid and moist and cannot dry out really fast. If you stand there long enough, they will move towards you and actually crawl up your legs from there. Even if you're not aware that you're in a tick habitat, you may be.”

What types of tick-borne diseases do you need to know about?

Tick-borne diseases are transmitted to humans when a person is bit by an infected tick. While Lyme disease is by far one of the most commonly reported tick-borne diseases in the U.S. with more than 25,000 confirmed cases and 8,000 probable cases in 2016, Machtinger points out that alpha-gal and Rocky Mountain Spotted Fever are other big ones that hunters could come across while in the field. Other common U.S. tick-borne diseases include babesiosis, ehrlichiosis, Southern Tick-Associated Rash Illness, Tick-Borne Relapsing Fever and tularemia, according to the Centers for Disease Control and Prevention (CDC).

Symptoms can range from a low-grade fever to body ache to a rash. If you suspect you’ve been bitten by a tick, you should get to a doctor immediately. All tick-borne diseases require immediate treatment upon diagnosis as the bacteria, viruses or parasites that cause these diseases can severely impact whomever is infected.

“I don’t think it’s really known whether these tick diseases are curable or if they go into remission,” says Machtinger.

What is known is that not all tick bites are created equal. Just ask these three hunters who have all experienced three different tick-borne diseases. 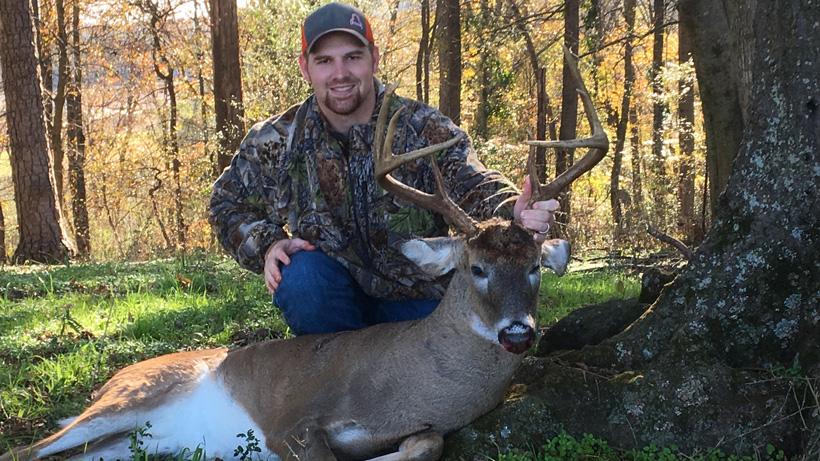 “A few years ago, while I was hog trapping in Georgia, I noticed that I started having reactions when I’d eat hamburgers,” says Josh Gamblin, “but I didn’t know why because the reactions were delayed by four to six hours after I’d eat.”

“I went into anaphylactic shock several hours after dinner,” says Gamblin. “When I got out of the hospital, I went to see an allergist in Athens, GA. He ended up diagnosing me with alpha-gal.”

Alpha-gal – better known as the mammal meat allergy – is caused by the bite of an infected lone star tick. According to the Mayo Clinic, the tick’s bite “transmits a sugar molecule called alpha-gal into the body,” which can trigger “an immune system reaction that later produces mile to severe reactions” if the infected person eats red meat. While Gamblin can’t pinpoint when he came across a lone star tick, his wildlife and conservation-based job keeps him in various types of brush throughout the day as did his enthusiasm for deer hunting.

Since his diagnosis, he’s managed to avoid red meat, but has to be careful about cross-contamination. For instance, since he developed the allergy, he can’t wear leather.

“Even with socks on, leather boots will cause a skin reaction,” says Gamblin. “I can’t wear a real leather belt anymore…it will make my stomach break out in hives.”

Alpha-gal has changed Gamblin’s hunting preferences. “I still deer hunt…but I just give the meat away. It’s a bit harder to justify spending money when I can’t even eat the meat. I definitely do spend more time turkey and dove hunting now than I used to.”

Fortunately, for Gamblin, who loves to trap, he can still set meat traps without any issue. Of course, that doesn’t mean someone else with alpha-gal could. Each person reacts differently to the disease; however, all those infected have one similar trait in common: they cannot eat red (mammal) meat without having an allergic reaction. 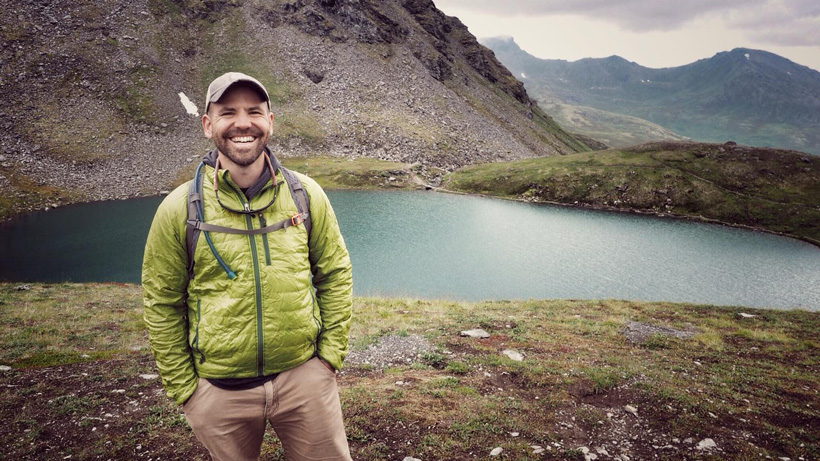 “I started to feel like I had a virus: fever, fatigue, minor joint pain,” says D’Angelo. “But, honestly, it was mostly just annoying.”

Still feeling a bit run-down, D’Angelo decided to head out bowhunting for elk on Montana’s opening day, but, by the third day, he started to feel sick again. He packed it up and drove home. Only this time, D’Angelo experienced more than just fever and fatigue. He had a rash that he says wasn’t the typical bullseye associated with Lyme Disease. His pulse also became erratic.

“I was having strange panic attacks at weird hours and I noticed that my resting pulse had increased to 80 to 90 beats per minute rather than the usual 60,” says D’Angelo. “I was also having some random heart palpitations that seemed to be increasing in frequency.”

D’Angelo had already gone through a series of tests as doctor’s tried to figure out what was causing his issues. After doing a bit of his own internet research, he asked to be tested for Lyme Disease. However, while he waited for his test results to come back, he experienced another episode that nearly killed him.

“The day after I was tested for Lyme, I was driving to work and started to feel like I was going to faint,” says D’Angelo. “I literally almost passed out at the wheel. Luckily, I was able to pull over and check my pulse. My heartbeat was all over the place and there were these long pauses between beats that caused me to nearly black out.”

D’Angelo called his parents who were able to take him to the ER. Once there, the doctors agreed with his self-diagnosis of Lyme and started him on antibiotics. Unfortunately, the delay in his diagnosis caused him to experience Lyme carditis, an inflammation of the heart due to the bacterial infection. The doctors had to install a temporary pacemaker to regulate his heartbeat.

Lyme Disease is caused by blacklegged tick bites. Fever and fatigue are usually accompanied by a bullseye-like rash. Left untreated, according to the CDC, Lyme Disease can “spread to joints, the heart, and the nervous system” and can lead to what D’Angelo experienced: Lyme carditis.

D’Angelo, a fisheries biologist, says he’s still weak despite completing four weeks of IV antibiotics and, for the time being, has been working in an office rather than out in the field. He also says he’s not planning to go on any solo hunts any time soon, that is, once he feels well enough to head back out.

“Lyme has made me incredibly fatigued still,” says D’Angelo. “And, apparently, I might feel that way for quite a while longer.” 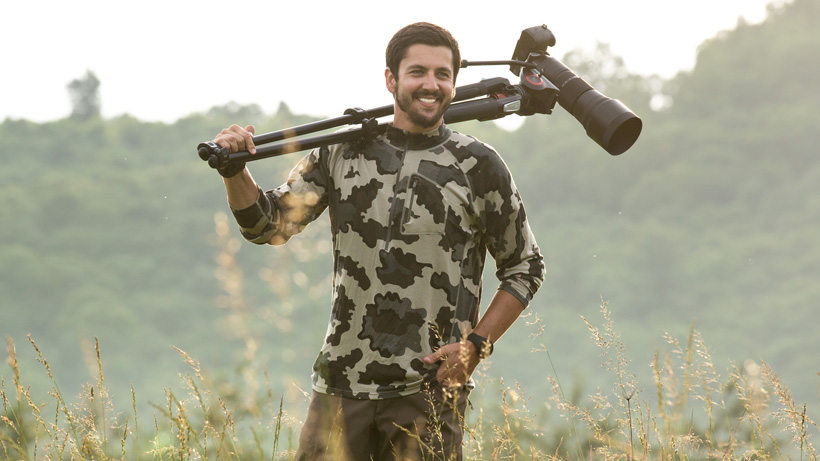 Last May, Cody Altizer was removing non-native invasive plants and bushes on his family’s farm in Virginia. It was something he helped out with every spring, but this time, things ended up a little differently.

“A week or so after I was done, I started feeling really really bad,” says Altizer, who immediately went to the doctor.

Because he had symptoms similar to Lyme (fever, fatigue and rash), doctors initially diagnosed him with Lyme and put him on a course of antibiotics. However, the rash—a spotty red mess that traveled across his shoulder—became worse and he found himself back in the ER, where he soon received a different diagnosis: Rocky Mountain Spotted Fever.

According to the CDC, if left untreated, symptoms can escalate and the disease “can rapidly progress to a serious and life-threatening illness.” It’s transmitted by several different ticks: the American dog tick, Rocky Mountain wood tick and the brown dog tick. Because Altizer never saw a tick on him, it’s impossible to know which type of tick bit him while he worked on the farm. Fortunately, the antibiotics he was already on to treat his supposed Lyme Disease worked for Rocky Mountain Spotted Fever, too.

“I believe it’s more of a one-time thing,” says Altizer. “And, from what I researched, it’s not a common disease to get.”

In fact, according to CDC, the number of “spotted fever rickettsiosis” has increased from 495 cases in 2000 to over 4,269 cases in 2016; however, not all of these reported cases are actually Rocky Mountain Spotted Fever.

Yet, Altizer doesn’t plan to change his hunting or outdoor habits aside from taking a few extra precautions.

“For my career, I’m always outside filming or photographing wildlife,” says Altizer. “While this disease definitely made me more aware of what can happen, it’s not going to keep me from doing what I enjoy.”

Tick prevention during and after the hunt

Permethrin-treated clothing is one of the biggest deterrents to ticks. A recent study completed by the CDC tested permethrin’s effect on blacklegged ticks, American dog ticks and lone star ticks after only a minute of contact with permethrin-treated clothing. What they discovered was that the treated fabric appeared to be toxic to the ticks, which is why it's highly advisable to treat clothing (and tents and sleeping bags) with permethrin before you head out on a hunt.

“Permethrin works both as a repellant to ticks and also as a toxicant so once they come in contact with it, they have a neuro-response and it actually kills them,” says Machtinger. “It's not like DEET, which is mostly a repellant. Permethrin will actually kill the ticks when they get on the material.”

Of course, with most hunters, scent can come into play, which may make some wary about using permethrin on their hunting clothing. However, Machtinger says hunters shouldn’t worry too much as permethrin is not a scent deer should even pick up on.

“It's not a human scent or mixed in with a predator scent,” says Machtinger. “And the level that you're using with permethrin-treated clothing is pretty minimal so the chances of that being an aggressive scent to deer is probably pretty low.”

After the hunt, it’s important to do a tick check and, if you can, immediately take a shower and put your clothes in the dryer. While the heat doesn’t kill ticks, the dryness does; ticks need moisture to survive.

Click here for a guide on how to perform a tick check and how to remove a tick if you find one on you.