theBULLET - Top 31 responses: One state to hunt the rest of your life 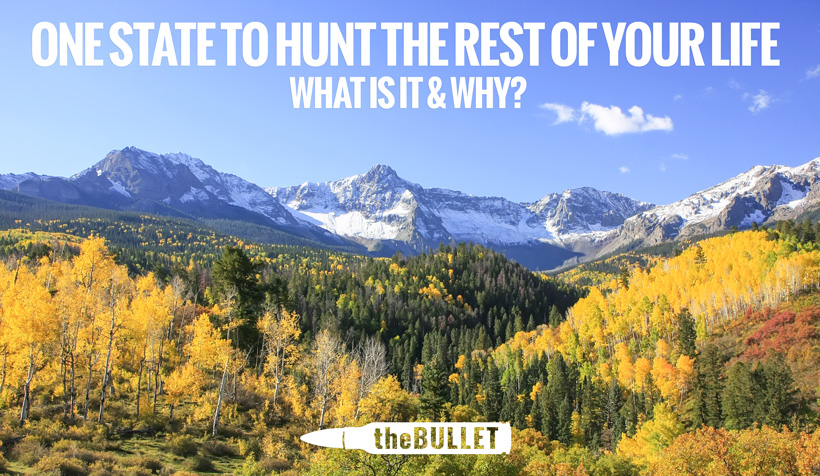 Last week we asked hunters on Facebook, Instagram and Twitter to answer a very important question: One state to hunt the rest of your life - What is it and why? This is what they had to say and a breakdown of the responses.

Percentage breakdown of the responses we received.

Here are our favorite 31 responses:

Oregon hands down. Such a vast array of terrain and big game from the coastal buck, Roosevelt elk, and spring bear to the upland birds, giant muleys, and sheep of cent and eastern Oregon. That's not even mentioning the fishing. — @mcgrath525 (Instagram)

Michigan - It's home, we have lots of public land and opportunity to hunt, and if that doesn't continue for the rest of my life and beyond then I haven't done my job as a hunter-conservationist. — Drew YoungeDyke (Facebook)

Nevada. Nevada is not only a great western state with many big game options, but there is still true western feel to it. It's rich in history like the Pony Express and historical mining (which still occurs), but with its remoteness it's not uncommon to find yourself not only isolated (which is not a terrible thing), but you can still encounter the western lifestyle found in the ranching communities that call Nevada home. To me, it's still the "Wild West". — Scott Harris (Facebook)

I would say Colorado ABSOLUTELY beautiful part of the country. A lot of game animals of various types to hunt, and of trophy quality, the magic is alive there and fills your dreams in many ways. — Randall Jess Schopper Sr. (Facebook)

Montana has it all, mule deer, whitetail, elk, antelope, cats, wolves, big horn, mtn. goat, moose, black bear, grizzly, yotes, birds, I think there are few other states on the continent that can boast almost every big game species in North America. Montana, they don't call it the last best place and big sky country for nothing. Enough said! — @secondhandgrenades (Instagram)

I would choose Idaho. It's where I grew up. There is such a variance in hunting environments; you can go from arid desert to 10,000 ft peaks to heavy timber. Plus they have an incredible variety of big game animals to hunt. Too many in fact to list here. And one final bonus you can still purchase tags over the counter. — Joshua Kamplin (Facebook)

Arizona - first off, it's my home state and I love it's diverse terrain and unique beauty. I love that within a 2-hour drive I can hunt world-class elk, desert bighorns and Coues deer. Another couple hours north and I can be on the Kaibab plateau or the Arizona Strip. While some tags can take a lifetime to draw, there are great over-the-counter opportunities every year. Not many states can compete with Arizona when it comes to trophy-class animals. I'll always hunt my home state and wouldn't be disappointed if it were the only state I could hunt for the rest of my life. — JD Darner (Facebook)

Alaska without a doubt. As a resident you have access to more tags, country and species than any other state. And you won't even see another hunter. — @huntarchive (Instagram)

I hunt Montana! I hunt elk above timberline in September (bring your fly rod)! I hunt deer in the late fall, I hunt waterfowl in the winter, I hunt black bear in the spring (while collecting elk sheds), and I float the rivers with my fly rod during the summer! When you're field dressing your elk, watch your back for Grizzlies... — Greg Leitner (Facebook)

Montana: small in human population, huge in animal diversity, I believe that Montana is the best place to spend your life hunting. The vast amounts of public land are abundant in small game, large game, and birds, it's never a wasted trip when you go out. Also, the small towns and locals make staying in MT very hospitable, not to mention its beauty during the hunting season. — Patrick White (Facebook)

As a western hunter there are a half dozen different states that would fit the criteria of a home state. Idaho is my home state it is represented and managed in such a way that monsters are present and there are general tags for most of the state for deer and elk. sheep, goat, and moose tags aren't impossible to draw and there is plenty of public ground to hunt. Seasons are short enough to keep a reasonable amount of game on public ground which is arguable. Wolves have taken a toll however there is still plenty of game and dozens of different retain styles to hunt from open hillsides to sage flats and river bottoms. it there is never not enough terrain to hunt and there is always a different way to hunt it. — Kyle Huebner (Facebook)

Nevada lived here my whole life and you get such a variety to hunt and I'm comfortable here and have many ranching roots. Nothing beats riding right up on a big ol' muley on horseback. — Clark Phillips (Facebook)

ARIZONA WITHOUT HESITATION!!!! We have a wide variety of big game options and seasons to keep any hunter busy! The grey ghost being one species that I hold near to my heart, I can't imagine moving away from the opportunity to hunt them! Our peaks only units have alpine meadows and transcends the different vegetation all the way to the desert floor. — Kenneth Meyers (Facebook)

Colorado! With the help of GoHunt I could kill huge mule deer every year with Over the Counter tags too. — @bcoop27 (Instagram)

Montana- There's over 30 million acres of public land not including private land enrolled in Block Management. You can hunt from August 15 through till June 15 of the next year. The unlimited Bighorn units. The largest bighorn sheep in the country in the Breaks. Great mountain goat hunting. Nonresident elk and deer tags don't sell out until August and sometimes later and the pronghorn are coming back. Mountain Lion, Wolf, Black Bear, and hopefully a Griz season soon. Wide range of wildlife. There are still ranchers who you just ask to hunt and they show you exactly where they last saw the big one. If it's the 2 months with no hunting season go fish the blue ribbon trout streams that cover the state. Plus we've got RMEF, Rocky Mountain Goat Alliance, and soon the Wild Sheep Foundation. Its Big Sky Country. Happy hunting this year and be safe. — Cody Abbott (Facebook)

Colorado for sure. We have such a variety of big game species, from speed goats to bighorn sheep, whitetail deer to mountain lions and of course all the great elk hunting. And in all the small game fishing along with all the public land access you can get just about anything you want here. — Jake Burrows (Facebook)

Alright I'll say Utah. Through the dedicated hunter program and general draw you can hunt units holding big deer pretty much every year. You can also purchase OTC elk tags and if you do the work you can kill elk every year. Premium deer, elk, sheep, goats, antelope, moose and buffalo are all very tough to draw but it's one of few states where you have a legitimate chance at a 400 inch elk and a 200 inch muley. — Ben Detta (Facebook)

Wyoming. Awesome elk, deer and antelope. Lots of different types of country. Lots of variety in tag types. Beautiful country to go along with it. — Joseph Ewing (Facebook)

Colorado because it is absolutely beautiful during hunting season. Colorado has a wide variety of animals with Elk, Mule Deer, Whitetail Deer, Antelope, Black Bear, Mountain Lion, Mountain Goat, Moose, Buffalo, Bighorn Sheep, and Desert Bighorn Sheep. Also, the Turkey hunting is great. There's nothing better than being a resident of Colorado and being able to hunt all of these animals within a couple hours of each other! — @filthyrich845 (Instagram)

Alaska. Literally everything I would ever need to hunt & close to no LIBERALS & ANTIS! So tired of living in Western Washington. — Brady Hollis (Facebook)

Definitely Nuevo Mexico. For the Big Game Hunter we have draw Elk, Deer and Antelope. Great representations of each species available. Then add in Oryx, Barbary Sheep, Ibex, Javelina, Coues Deer, Whitetail, and even a few feral hogs. I have taken all except Ibex, but I'm not dead yet! For the bird hunter we've got turkey, pheasant, bobwhite, Gambels, and blue quail, as well as dove and ducks. How about some coyotes and prairie dogs? Oh yeah, there's blue grouse, squirrels, and rattlesnakes too. I've even seen porcupines in the desert, coons in Ruidoso, and wolverines near Dulce. I know I've missed something, but you get the point. — Wesley M Moore (Facebook)

Colorado. Lots of great hunting and all the rich and famous come to our state to ski! But hopefully with proper management and all the public lands we should be able to hunt for a very long time. — Corky Chinery (Facebook)

If it has to be a state and not a country or continent, I would say my home state of Co. because of all the varieties of game we have. The one thing I wish we had but don't is grizzly bears. — @tsanchez25 (Instagram)

N.E.V.A.D.A. - There is something special about hunting your home state. It has every type of terrain to hunt and holds some incredible animals. — Lorenzo Sartini

Colorado. Nothing beats their high country and archery opportunities for mule deer. Plus the state tends to hold some giants! — Brady Miller

Arizona is my clear choice. The overall trophy quality among all the species offered in Arizona is as good as it gets. Winter kill is also never an issue in the Grand Canyon state. — Dave Loescher

Utah. It produces some of the best animals from across the west. It also holds a wide variety of species to hunt. — Brandon Evans