theBULLET - 33 great responses: Bulls vs bucks and why? 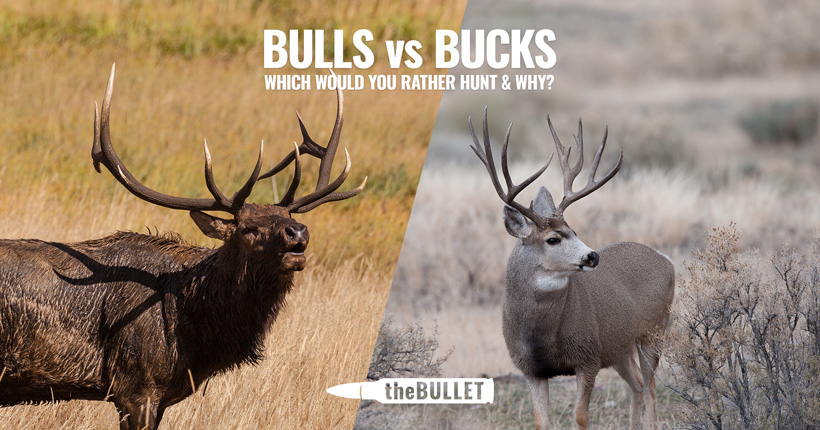 Last week we asked hunters on Facebook, Instagram and Twitter to answer a very important question: Bulls vs Bucks: Which would you rather hunt and why? This is what they had to say and a breakdown of the responses.

Here are our favorite 33 responses:

Why don't you just ask me to choose between my kids next time! — @jdheinerblog (Instagram)

Bulls, without a doubt. When you have the king of the mountain at 54 yards screaming his lungs out, it's the most exhilarating thing ever. It's the side of nature not many people get to see up close and personal. I experienced it for the first time this year and now I will only rut hunt. — Nathan Gruenhaupt (Facebook)

Bulls all day, until you've gotten out and chased some elk up in the high mountains in the most beautiful country and listen to how vocal they are, you'll never understand. — Shawn Mayfield (Facebook)

I started out hunting mule deer with my father & uncles it's just something special to me watching mule deer in there habitat. I love elk hunting too but it's been tough the last 5 years just need to find better areas. — Ricky Amezcua (Facebook)

Why choose one or the other. I hunt both!!! — Sean Moore (Facebook)

Bulls. Deer are awesome but they never taste as good as elk do and ultimately that is why I hunt. The antlers are awesome and I love to display them but they don't feed my family. — Joseph Lambert (Facebook)

Bulls definitely being an archery hunter nothing can compare to the first bugle of the season and the last bugle right before you arrow that big bull. — @high_altitude_outfitter (Instagram)

I love to hunt both, if I had make a choice it would be elk. Happiness is hunting with my best friend, my son. — Art Stenzel (Facebook)

Bulls, I can only imagine the adrenaline rush I would get just getting to listen to a big bull and cow in full rut. There is no drug or drink that could ever match that HIGH. The only thing better would be after I squeezed off a round from my .300 RUM and watched a giant bull go down. Talk about a celebration but as awesome as that would be. An even better experience would be to watch my older brother take the bull. — Johnny Waters (Facebook)

Big ol' muley bucks. Why cause there harder to kill I believe and I love the habitat they live in. To me there's nothing like an old smart muley. — Brock Maynard (Facebook)

Hands down the mule deer. This elusive creature has escaped me a multiple number of times, hence the term "Grey Ghost". Don't get me wrong, calling in a big bull at 30 yards and have him scream a bugle to you at that distance is a huge adrenaline rush, but to me finding a monster muley and trying to put a stalk on him for an opportunity to harvest, is at the top of my list. Has always been my favorite species and always will! — Joey Faigl (Facebook)

Bulls, no, bucks, wait bulls, no, no bucks, bulls, what was the question? — Buzz Izard (Facebook)

I hunt mule deer because I can pack the whole thing in a load or two by myself. Not to mention the tags cost less and they are much easier to load on a plane. A good Muley buck is a hard customer too.— Christopher Gearhart (Facebook)

Bulls! Archery... Can you imagine being so close to a giant bull elk he can hear your heart pound, all while slowly trying to pull back as quietly as possible? THATS MY DREAM!! Nothing tastes as good as something you killed yourself. Plus elk is like meat candy. — Amber Dennis (Facebook)

There are deer hunters and there are elk hunters. Depending on which one you are,one will drive you more than the other. Myself it's elk. Don't think for a minute I wouldn't love having a 30 inch wide buck on the wall. But for me there is nothing like chasing big bulls in the rut when they are screaming all around you. — @billsease (Instagram)

Bucks. The thrill,skill and tactics to actually get close enough to shoot a one of kind is unexplainable. — Marc Carfora (Facebook)

Either one it's meat in the freezer. — Doug Fogle (Facebook)

Elk is my preferred hunt for three reasons: 1. It puts more meat in the freezer 2. It tastes a whole lot better 3. I've never had the opportunity to hunt elk myself. — David Hale (Facebook)

I have hunted for 37 yrs and have got my share, I started hunting elk in Wyoming in 2008 and saw an elk at 300 yards and was at ahwww and I was hooked it's such a majestic animal, and so beautiful and you can see and tell a good bull and tell if it has lived a life and be proud to have let it live a life and enjoy what God has given us to hunt. Thank you Lord Amen — Rudolph Floreno (Facebook)

Bulls! There is just something about being close to one of these giants, and just think about all that meat. — Jason Scudder (Facebook)

Bulls for sure i got one two years ago and that feelin was better than both my deer combined and I can't wait till December for my next bull! — @copenhagen_cowboy1822 (Instagram)

Bulls because there's nothing like stalking a herd of elk and hearing that bugle, gives me life when I hear it haha! — Canaan Salido (Facebook)

There is no bigger adrenaline rush than a mad, screaming elk at 10 yards. And there's nothing cooler than watching a first-timer hear it! Bulls, no question. — @4dubsmom (Instagram)

Bulls. The thrill of bugle! Not to mention a heavier pack is a better pack! — Brad Hoffman (Facebook)

Bulls all the way.. Nothing like the memories of running Heath, Blake and Tiberti over with bugling rutting Bulls.. Which one to shoot while to majestic Bulls are fighting.. Father son teams and videoing my own son at seven years old calling a 6x7, 360 bull within 12 feet from him. And the best gutter Jeff.. Thanks for all the wonderful memories. #huntingmemories #oldhuntersnow — @tmtebbs (Instagram)

Tracking a crafty old large Mule deer. The fall colors the smell of the sage, the damp earth, the peace I have as I become one with nature and my predator instinct kicks in. — Sam Nesi​ (Facebook)

Bull elk hands down. The early morning frost ,a trickling stream and out of nowhere the big mature bull elk bugles, the hair raises on your neck as the bull steps up out of the willows. I can't imagine anything that is more exciting to hunt then those bull elk!! — Roger Sauve​ (Facebook)

I hunt both, but prefer bulls. There just bigger and there's no feeling like fooling one and getting him to come in on a call, especially moose. — Gord Nuttall​ (Facebook)

Love hunting both but if I had to pick one it would be bulls. A bugling bull screaming his head off really gets your blood pumping!!! — Chris Marx​ (Facebook)

Bucks - There is something special about mule deer to me. The way they sneak through the low desert and can disappear at a moments notice amazes me. But, more than anything I love how each buck looks completely unique and can stand out on its own. — Lorenzo Sartini

Mule deer all the way. They are incredible animals. It amazes me how they adapt to their environment. They can live in the hot desert or the freezing cold mountains. — Chris Porter

I will take which ever one I have a tag for. Each animal provides a unique challenge as a hunter and I am addicted to the challenge and the game of hunting. — Kody Smith

Bucks all day. In my opinion, mule deer are the true monarchs of the mountains. There is nothing like slowly stalking in on a wise old mule deer.  — Brady Miller

Mule deer will always be my favorite. Although trophy bull elk present a definite challenge to any hunter and demand respect, a mature mule deer buck will always epitomize hunting the West. — Dave Loescher

Mule deer, there is just something about where they live and how you have to hunt them. Not that I would ever turn down the chance to hunt a giant screaming bull. — Brandon Evans