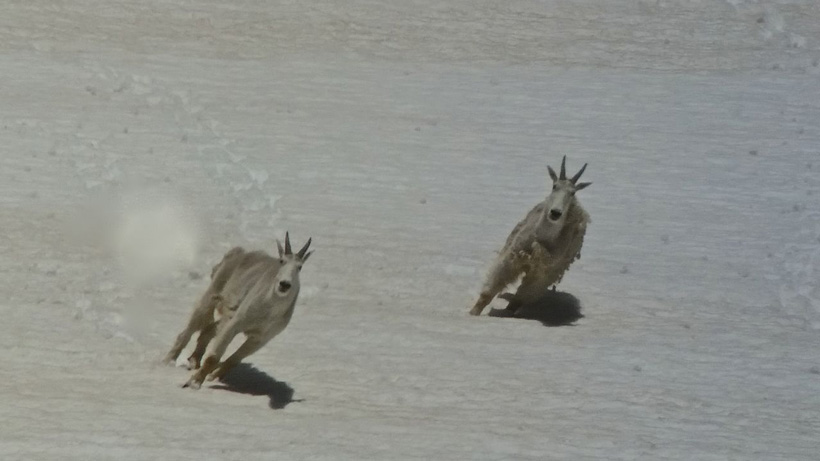 Drenched in sweat after a nearly vertical 1,500’ climb up through some gnarly, inspiring cliffs in Utah’s majestic Tushar Mountains (Beaver unit), I didn’t have time to worry about the biting October cold. Time was precious! I had to get my hunter, who was starting to struggle physically from the thin high altitude air, into a high mountain saddle where he could get a shot at a great once-in-a-lifetime trophy mountain goat! Taking a breather just below the saddle, I crawled up to where I could take a look at the other side while my hunter rested. Slowly poking my head up over a lichen-covered boulder, I quickly located the pure white billy bedded comfortably below us on a windswept spear ridge that angled sharply downward to the rim of some purple, sheer cliffs. The billy was looking away. I ranged the white mountain warrior at 425 yards. Quickly placing my backpack into a natural crevice between a graveyard of sharp, weathered boulders, I motioned for my client, Pat, to cautiously creep up beside me. An accomplished hunter, he confidently laid his rifle across my pack. Unable to get into a prone shooting position, I had to readjust the pack to an upright position so he could rest his rifle on top from a semi-sitting position. He nodded at me, feeling comfortable enough to make the shot. Locating the massive shouldered billy in the crosshairs of his scope. 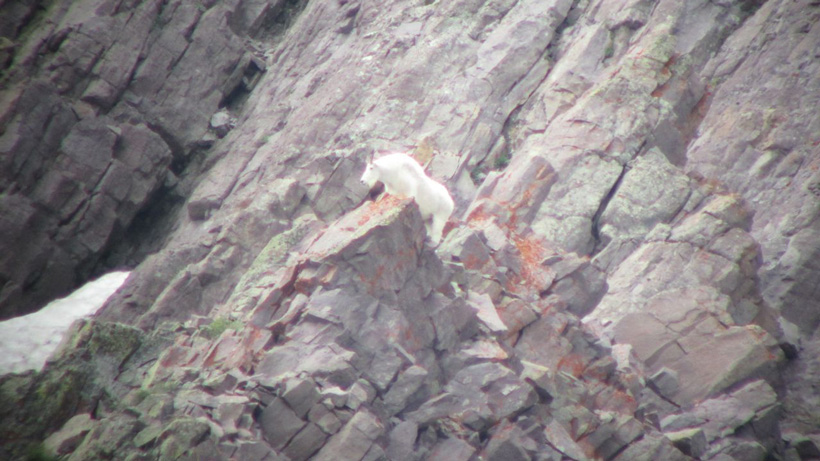 Pat adjusted the turrets to the correct yardage, noting the extreme downward trajectory. The goat continued to contently chew on his cud, surveying the vast mountain kingdom that stretched for miles below him. My biggest concern at that moment was whether or not the billy would roll off the cliffs when shot! I wanted a retrievable trophy that was not damaged since mountain goats are famous for taking a final cliff death dive after the shot.

Although I had never had a billy that I couldn’t retrieve whose cape and horns were damaged beyond taxidermy repair I was worried. Surveying the terrain below the billy very carefully once again, I felt confident that the goat would catch in some jagged boulders before free-falling over the cliff if Pat made a successful kill shot. I whispered for him to go ahead. It seemed like an eternity as time stood still before Pat slowly exhaled, then gently squeezed the trigger of his Blauser 7mm. My earplugs muffled the roar of the rifle. Watching through my binos, I saw the impact of the bullet as it slammed into its target just above the massive front shoulder right where the heart and lungs were located. Hesitantly, the bruiser of a billy slowly toppled onto his side, then slowly began to roll, end over end, quickly gaining momentum as gravity pulled it downward. I swore, spitting out a few expletives before holding my breath, willing the trophy goat to stop! Although it was only a few seconds, to us, it seemed like forever before the big bulldozer finally caught on a boulder at the edge of the precipitous cliff, halting its death plunge! I let out a yell of success as I knew that this billy would book! That memory and picture in time will forever be etched into our minds. 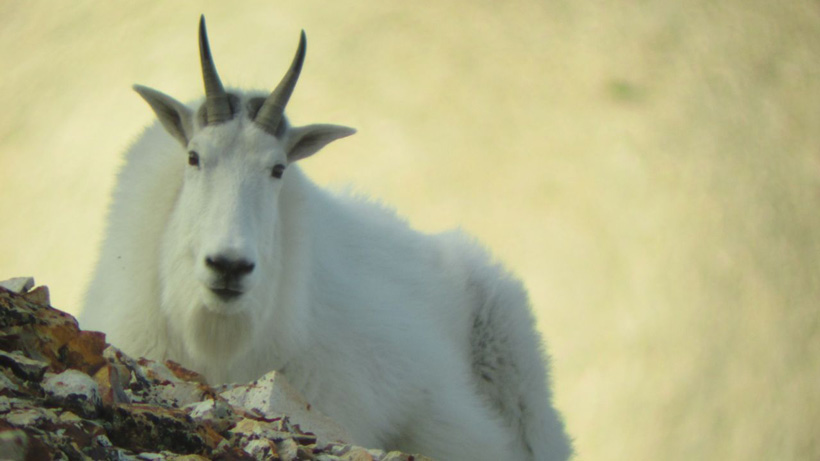 These incredible big game animals are not only as tough as it gets but they also live in some of the most amazing high alpine ecosystems on the continent! Rocky Mountain goats, in my mind, are true mountain warriors who survive in high elevation basins, imposing granite crags and formidable cliffs. Through my spotting scope, I’ve been captivated by these intimidating mountaineers as I’ve studied and watched their behavior from miles away. They treat dangerous, menacing, challenging terrain as if it were a playground for children. Built like a bulky tank, mountain goats are quite the contrary! They are extremely acrobatic, nimble, athletic, powerfully built animals that live where few other animals dare venture. Mountain goats survive on snow swept ridges in high elevation environments where they eat lichen and moss off rocks swept bare of snow in the winter. Predators won’t climb to where mountain goats venture. Displaying large, splayed hooves, goats are able to navigate and cling to cliffs as if they were wearing suction cups! Their hooves, dew claws, muscular shoulders and powerful hindquarters are designed to give them the additional traction they need to climb cliffs. 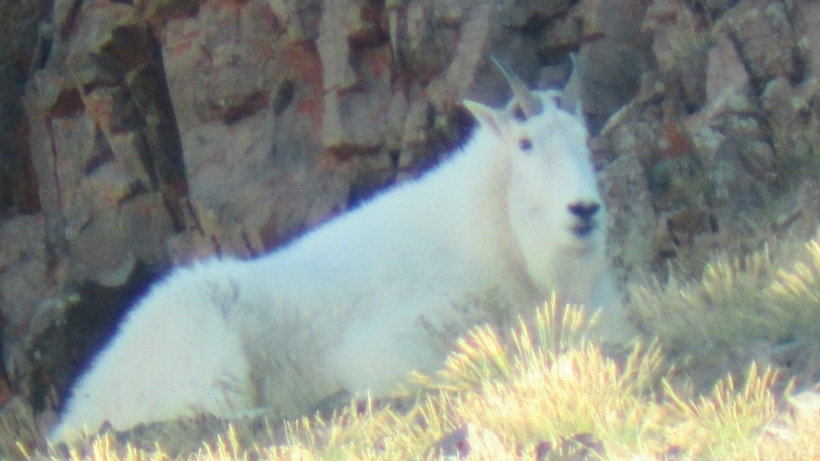 Billies and nannies both feature long beards, short stubby tails, and long black horns, highlighted by yearly growth rings. Many hunters find it difficult to distinguish the difference. A billy, however, is larger in size than a nanny and is characterized by a more prominent shoulder hump and longer, more pronounced “pantaloons” on the legs. Its horns will be thicker throughout the length and display greater mass at the base. A billy's horns have a gradual curve, and features enlarged black scent glands behind the base of its horns. At closer distances, sex organs may be visible. A billy will also stretch out to urinate while nannies squat close to the ground. In many instances, billies like to be off by themselves or in small solitary groups of two to three animals. Known for their unbelievably thick coats of thick pelage or hair, mountain goats are resistant to wind and cold temperatures, etching out a living on razor-thin ridges and in high mountain bowls on the top of peaks that eagles survey from high above. Caping a mountain goat is always interesting as the outer hair is long and thick covering a base layer of fine, extremely dense wool that insulates their bodies from the cold. Mountain goats make incredibly beautiful mounts! 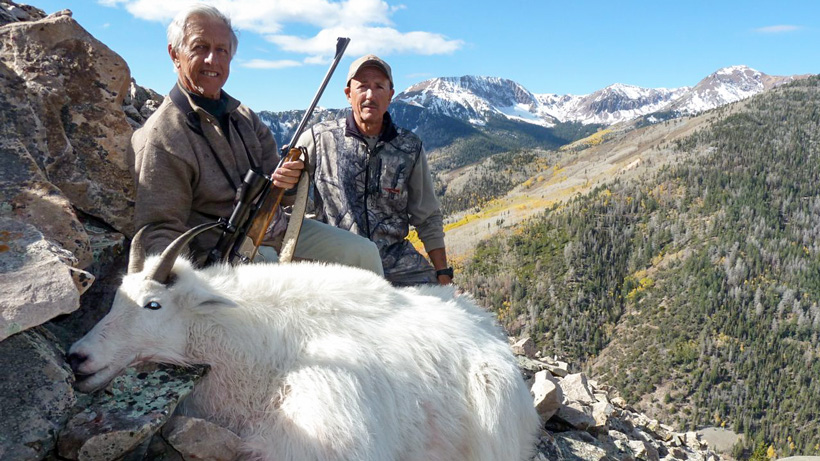 If you are fortunate enough to draw a tag to hunt one of these magnificent animals then you better prepare for a very physical, lung scorching, high mountain backcountry hunting experience like no other! Many hunters prefer late season goat hunts as they are then “haired up with luxurious coats” for the cold of winter. However, you better be prepared to deal with snow and very cold conditions that can make a late season hunt much more difficult and challenging. Getting up into the high elevation mountainous terrain where the big trophy billies are located during the late season can be treacherous. In many instances, harvesting a mountain goat during this time can be very demanding as heavy snowfall in this type of terrain can make the retrieving of your trophy extremely difficult. However, those types of challenges are exactly what many hunters dream of. Please note that I’ve also had hunters harvest some outstanding early season (September) Utah goats whose pelage was thick and beautiful. These decisions for hunters are always difficult. First and foremost, they should take into consideration their physical condition, the expensive cutting edge gear required for a late season hunt and how much time they can spend out in the field. The final mitigating factor would be to look closely at which season offers the best drawing odds of securing a once-in-a-lifetime tag. 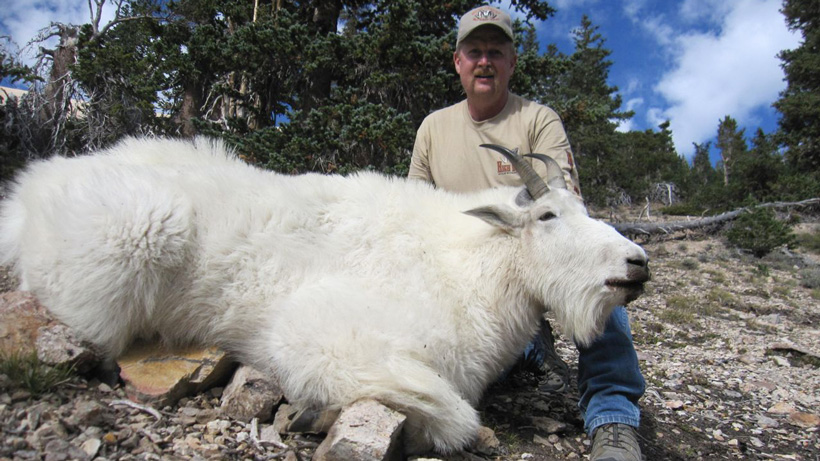 Another mountain goat guided by Randy.

Chasing one of Utah’s white mountain warriors with me in the Tushar Mountains that are right in of my backyard where I have spent a lifetime exploring, learning trails, access routes, etc, offers an incredible hunt. However, I also believe it is extremely important to make such a hunt an epic, encompassing experience! Etched in Utah folklore for their gold, silver and alunite mines during the late 1800s and early 1900s, the Tushar’s awe-inspiring peaks are a treasure trove of long-forgotten miner’s cabins, old ghost towns, and some great elk and deer hunting. 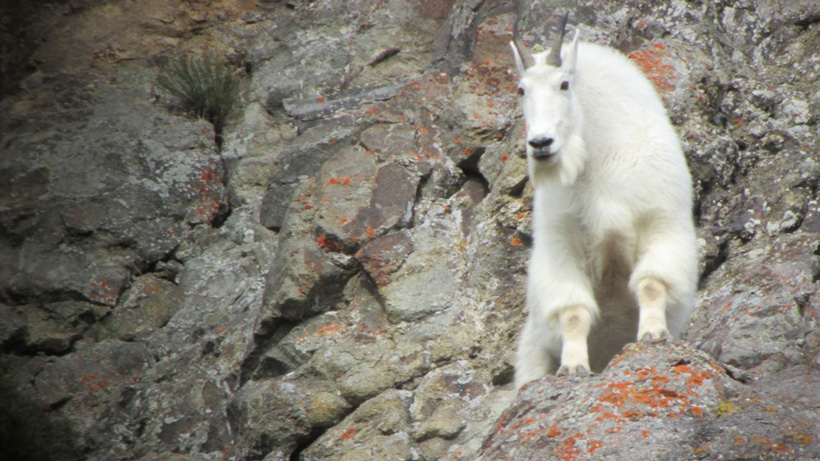 “As I reflect back on my Tushar mountain goat hunt I sincerely believe that success and satisfaction lies in the culmination of being able to experience such legendary country, spending time with quality people, and harvesting a trophy mature billy, all while staying safe. I’d be a liar if I didn’t admit that the harvest wasn’t important to some degree for me, but the trophy also lies in the sum of the entire experience. I’ve been on successful hunts with outfitters I’d rather not share a drink with and with nice guys that called themselves guides that had no business outfitting, but Randy Johnson and his team are AS GOOD AS IT GETS. Thank you for taking me on the road less traveled, sharing stories, the mountain’s history and showing me remote sights to ensure that my OVERALL EXPERIENCE WAS BREATHTAKING.” 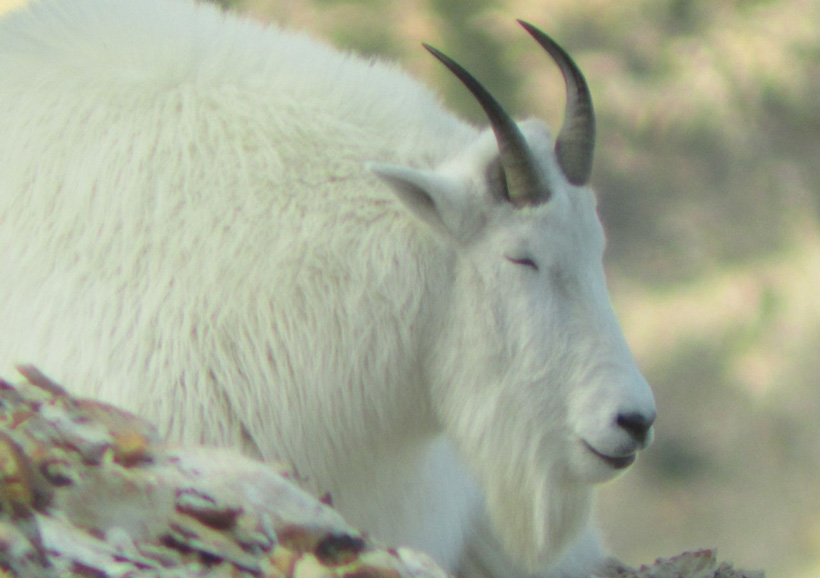 Successful mountain goat hunting requires meticulous planning, research, physical conditioning, passion and a pure love of hunting. It is about personal sacrifice, unrelenting family support, unforeseen obstacles and unbreakable character. It is about backbreaking work stained with the sweat and toil of your dreams! Yes, it is an unprecedented adrenaline high to have the opportunity to hunt one of these true mountain warriors. Good luck in drawing that coveted tag in future years!