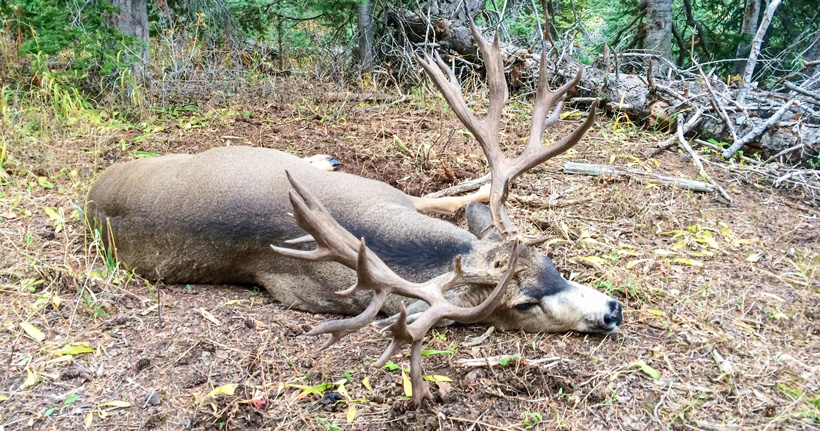 Since yesterday was the one year anniversary of Brett Ross' giant Colorado mule deer... we thought it would be a great time to share some additional questions about Brett's life one year later and show a few short outtakes from our Colorado's Deer documentary.

Outtakes from the documentary

How has your life changed since taking the buck?

Honestly not a whole lot has changed. I've met a lot of really great people and had a lot of really neat opportunities, but life is still pretty much back to normal now.

What tags did you draw this year?

I didn't draw a darn thing! I put in for a doe tag and didn't draw, so I'm counting on my family and friends to feed me this year. I get to go on a lot of great hunts this year with some friends and family, so I'll still get to scratch my hunting itch.

How many times have people asked you about Colorado’s deer?

I couldn't tell you how many times I've told the story. But I'm more than happy to do it. I know if I hadn't shot Trashy I would be asking the hunter who did about his story.

Did you hunt for a trophy or try to fill the freezer this year?

Like I said I couldn't even draw my doe tag this year. I'm hoping to be able to squeeze an over the counter cow elk tag in so I can have some backstrap and eggs! Nothing has changed with the way I hunt. If you get out among them either as a meat hunter or a trophy hunter, you have the chance of harvesting a quality animal.

What was the worst thing about shooting a 300 inch mule deer?

There aren't too many downfalls to having a smile that won't go away. But like everything it has its ups and its downs. There has been a few people who've said "he's ruined hunting for Western Colorado", "a real hunter deserved to take that buck", "he paid for that deer", and my personal favorite... "He's just a strung out rig rat!"

It's comical to me and I just brush it off. I only saw three points and took my shot with the intent to fill the freezer. I would be willing to bet some of them never would've pulled the trigger if they only saw three points but all of them would have if they saw 36 points. I'm not sure if it's jealousy or misery, but either way it doesn't affect me. And truth be told I catch more crap from my friends and family than anyone else. The jokes never stop.

We are in the final stages of buying a house right now and although it would be nice for it to be free... but I have a deer to hang in my new man cave.

Does your wife forgive you for giving up the money?

I honestly never heard about it again from her. I have an incredibly supportive wife. I don't know what I did right in my life to deserve her and Trashy.

Would you take back that decision?

Are you concerned that this year, off the success of last years hunt, that the hunting ground will be encroached on?

I was a little concerned about it at first until I spoke with a few guys who have had similar experiences. When a big animal gets shot the area is flooded for a couple years and then goes back to normal. I really hope this statement stays true because I can't wait to raise my kids hunting on the same mountain their dad and grand pops was raised on. But if you ask my buddies... they all think it's my fault that them and their ladies didn't draw buck tags this year. Like I said before... they're always giving me grief!