Social media, modern technology, and the commercialization of our wildlife 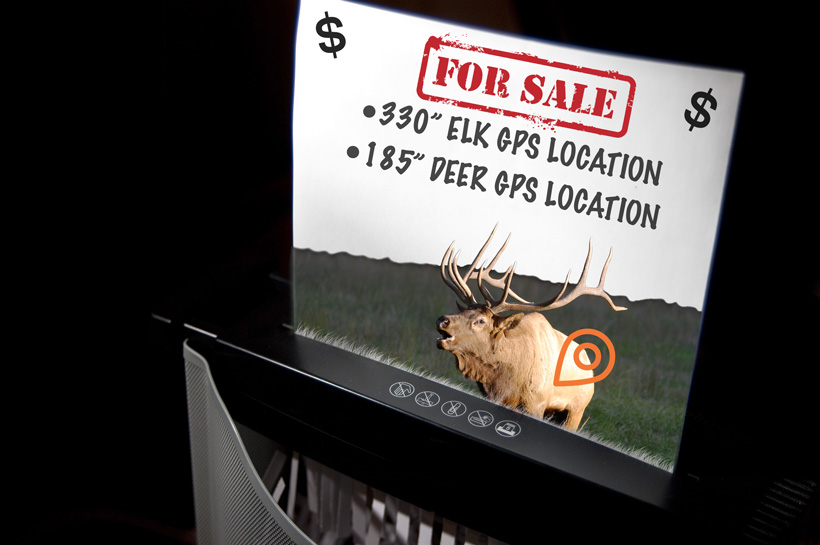 The slow shredding of our wildlife?

It’s no complicated fact that without social media much of our hunting community or companionship wouldn’t be where it is at today. Heck, without social media 90% of you would likely have never even been exposed to this article. No matter what your own personal participation level is, it is undeniable that social media is here to stay. While the use of social media platforms can be a great way to share our adventures with loved ones and friends, it can also be a feeding ground for anti-hunting organizations. Self-policing on our own personal level is a given, but what about when a business or organization begins pushing ideas that paint hunters in a negative light?

If you’ve spent any time on social media in the past month you may have seen the latest “insta-scandal” of companies now using phone apps to sell the location of trophy animals on public land. If not, here’s a basic rundown: Within these phone apps anyone who locates an animal, sign of an animal, or otherwise any indicator that a trophy animal may be present in an area can actually sell the GPS coordinates of the location to other users! What's more, it’s impossible to police this information, which leaves the opportunity for purchasers to be strung into a wild goose chase as they search for their next “wall hanger.” I'm sure I’m not alone in saying that this is incredibly alarming, infuriating, and downright wrong on many levels.

Your wildlife for sale

While the legality of these apps is even questionable to begin with it’s hard to stomach that anyone would be willing to give up any hard-won information and/or be so caught up in the killing of an animal that they would bypass the actual hunt in favor of swiping a card and punching a tag. It’s sickening, really.

The bottom line here is that anyone using this app is profiting off something that is a public resource and domain. That is to say, these profits are leveraged off of animals that are publicly owned by each and every citizen of the US! I know some of you will likely toss out the guides’ and outfitters’ arguments here, but it is important to remember that outfitters and guides pay their dues through licensing and permits to the states—not to mention the money they bring into local communities. At the other end of the spectrum, the creators of these apps are merely making a quick buck while not bringing anything to the table for the benefit of the wildlife and land. They are stealing from you, from your kids, and from your wallet.

The biggest gray area here is the exchange of money for information potentially leading to an animal being shot. This has gone on for years with finders fees made common in governor’s and auction tags. I have my opinions on the subject, but feel those should best be sorted through for yourself.

Wyoming has recently taken a stand against this with House Bill No. HB0005 Sale of wildlife information-prohibition that was pushed the 2018 Budge Session. According to The Sheridan Press, Wyoming Game and Fish Department chief game warden Brian Nesvik said the issue arose because individuals locate trophy class animals, taken photos of them, collected their GPS locations and sold the locations to scouting services, which also provide additional services to help hunters find the animals during hunting season. Back in 2016 Wyoming also banned the use of aerial scouting during the hunting season.

According to the bill:

Watching my daughter, who is now just over a year old, grow up in this world has been nothing short of spectacular. While I have to keep reminding myself to slow down and enjoy what we have now, I’d be lying if I wasn’t secretly waiting for her to turn 10 so she can participate in Montana’s mentored hunting program. I want her to come to love, appreciate, and embrace the hard work and dedication that comes with chasing animals on public lands and consistently filling tags. Apps like these seek only to cheapen the experience that is the hunt and cater to this new world where instant satisfaction is the motto of the day. This is not the hunting that I want my daughter to know. In fact, this is not hunting at all.

It kills me to think that anyone can stumble into a mature animal and sell its location while effectively robbing someone the opportunity to earn that animal through sweat equity and a pack out that is carried out well after the sun has gone down. While my style of hunting may not be favored by everyone, I do feel that animals of a given maturity level deserve a certain level of physical and/or mental commitment before a shot should be presented. The bottomline is this: It’s not my prerogative to decipher what hunting means to anyone, but I would wager to bet that the majority of you reading this would have no qualms with concluding that purchasing an animal’s locations is far from it.

Fair chase or not?

Here is another one of the gray area arguments. When it comes to fair chase, where do we draw the line? In an environment where tools such as Google Earth, trail cameras, and even research tools, where do we draw the line when discussing fair chase? Obviously, this is a subject that is up to individual interpretation, but here is how I see it: I see nothing wrong with using available published data, aerial imagery, or following a hot lead when it comes to researching a hunt. Heck, there’s a reason why I shoot a compound bow over traditional gear. In this modern era, I can choose to hunt as primitive or as tech savvy as I want with the limit falling comfortably into the lap of my consciousness.

Scouring harvest data or buck to doe ratios has never told me where animals inhabit a unit. Sure, combining that information with wildlife studies and aerial maps can narrow down good deer and elk habitat, but all of these areas still need to be ground verified. After finding a few good looking spots, I still have to hike into my favorite high country basins to glass or set trail cameras before learning a mature bull is in the area. I could save an awful lot of gas and time away from my family if I just purchased the location of a buck or bull the night before a hunt, but at what cost? I did absolutely nothing to earn that animal.

Perhaps the greatest issue I see with the apps is the public image they are creating for hunters. Think back to any anti-hunting posts where a hunter is at the center of attention. Common words you’ll run across will range from “murderer” to “psychopath” as well as a whole slew of other obscenities. It’s as important now as it ever has been to promote a positive image of hunters and how this lifestyle is so much more than simply killing animals. To put it into perspective, put yourself in the shoes of anyone in the non-hunting public and imagine how you might feel when you see hunters putting a price on an animal's head and selling it to the highest bidder. It makes it pretty easy to see why some have the strong opinions that they do.

For the most part, this is where hunting has arrived. Social media has driven the desire to kill a trophy to such an extent that people are willing to sell and buy animals in hopes that it leads to hashtag stardom. This is a pathetic fact and something that is quickly leading us down a road of irreversible damage. It’s time for a change. Fortunately, judging by a few of these companies Facebook pages, it’s fairly apparent that the hunting community has come together in force and let its voices be heard that the commercialization of our wildlife will not be tolerated.

Coming together for the greater good

If you haven’t figured it out yet I hold a lot of merit in the power of social media and truly believe that it will ultimately go down in history as one of the biggest proponents or opponents for our future. This fact was never more apparent than after Utah Congressman Jason Chaffetz introduced a bill that called for the disposal of 3.3 million acres of federal land across 10 western states. H.R. 621, as it was called, was withdrawn after just over a week after hunters across the country united under the hashtag #KeepItPublic and definitely stood up against the loss of protection for our public lands. If we can accomplish something as profound as that in a week we are capable of much more.

While I’m not saying we need to stage a protest because I haven’t drawn my bighorn sheep tag yet (I won't argue if you want to), we need to realize that while hunters occupy less than 10% of the total population of the United States, social media can serve as a megaphone. What we post on social media everyday will be open to interpretation by people from all walks of life. We need to think of ourselves as stewards of the sport and act accordingly. At the end of the day, we all need to learn to come together and fight for the greater good. Spreading positivity among our community and through the non-hunting public should be held in the highest regards.