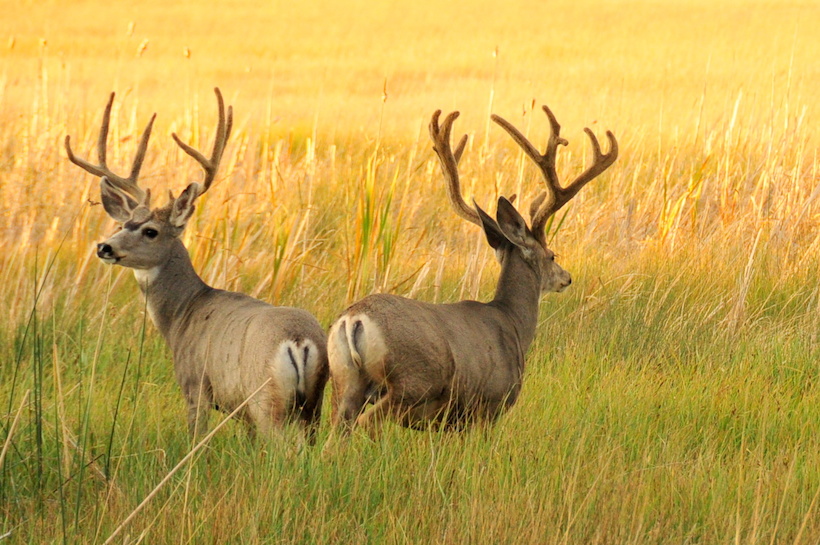 Mule deer are often regarded as an icon of the West. However, after their most recent highs in the mid-1980s, herd numbers began declining across the West. Here is the history and outlook in six states.

Mule deer populations peaked most recently in the early 1980s. Numbers declined through about 2000 and since then have likely increased by about 10%. Wildfires have created situations that are favorable to improved growth of deer populations, but limited availability of land with sufficient forage challenges numbers.

The statewide 2012 deer population estimate is 408,000, compared to 418,000 in 2011. Mule deer numbers in the far western portions of the state have declined. These declining herds are some of the largest populations in the state. The most significant factor impacting mule deer populations in Colorado is quality and quantity of habitat. Habitat effects may also be amplified by increasing elk numbers, as well as disease, predation and hunting.

Population estimates suggest a decline of approximately 18% from just over 130,000 deer between 1998 and 2001, to a more recent average population level closer to 110,000. A major decline was reported in 2002, and since then, estimates have remained relatively stable. The 2013 estimate decreased to 106,000 deer from 112,000 in 2012. Drought conditions have been the primary issue challenging mule deer populations.

A closer look at the steady decline of the mule deer population in Nevada.

The latest drought hitting New Mexico that began in the winter of 2010-2011 has continued throughout the state. Mule deer populations have declined statewide because of low recruitment. While some moisture occurred statewide during the monsoon season followed by the 2011-2012 winter, 2012-2013 was one of the driest periods in recorded history. Most of New Mexico is under extreme stress due to the sustained drought period and mule deer will continue to be impacted from poor quality habitat and limited quantity habitat as well.

The mule deer pop in Utah has been in a state of decline for over 40 years. While there are many factors contributing to this decline, the loss and degradation of habitat have likely had the most impact on mule deer numbers. It should also be noted that other factors such as predation and disease are intensified when habitat quality is reduced. Mule deer numbers remain well below objective population levels in key regions of the state. 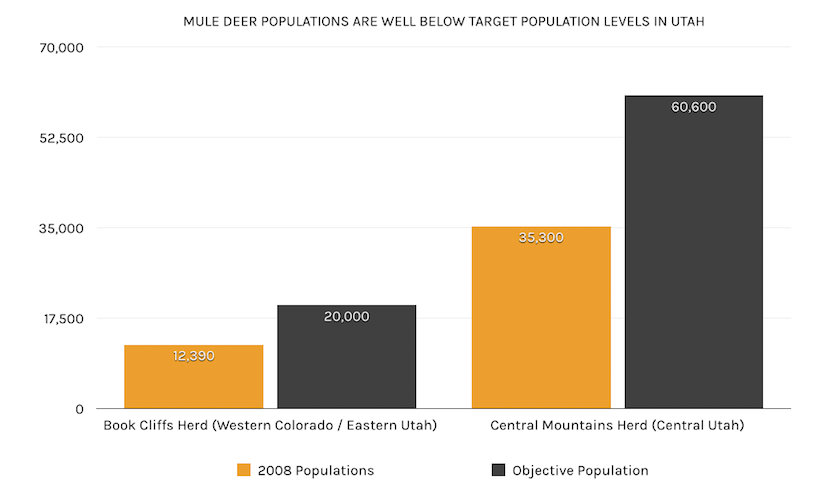 What is the reason for mule deer population decline? When it first started, many states began searching for the smoking gun. What experts have discovered, though, is that there is no single reason populations are falling. Rather, declines could be attributed to a number of factors that often vary by region. These factors include: habitat quality, habitat quantity, predators, disease and competition. Here is a closer look at these issues:

Due to the extreme drought in the American West, plant abundance, digestibility and distribution have all been impacted. Native plant communities have become less productive and more susceptible to weeds, wildfires, mortality, disease and over-utilization. This loss in quantity and quality drastically effects mule deer distribution, reproduction, survival and relative abundance.

Drought cycles have also had a profound impact on usable mule deer habitat and mule deer production. Wildfires on critical regions have reduced the amount of winter range available to mule deer. The losses of habitat is exacerbated by the fragmentation of suitable land, as mule deer struggle to find connectivity between summer and winter ranges.