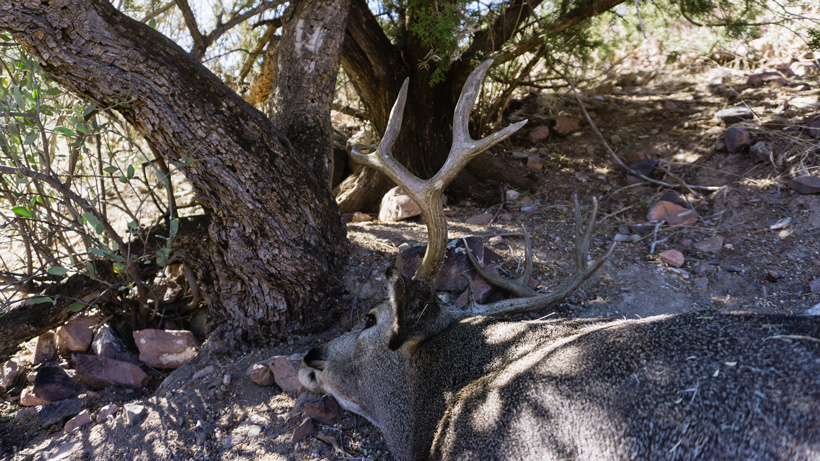 It was opening day of a November rifle Coues deer hunt here in Arizona. I’d been scouting every weekend up until this point and still had not turned up a buck. Doubt began to sink into my mind as a laid in my tent the night before.

"Was this going to be another year with an unfilled tag?"

I refused to believe that during my last morning at camp. Breakfast had been eaten, coffee was washed down, and I was ready to get this hunt started. Making my way through the dark as snow lightly fell gave me high hopes.

"Maybe this cold snap will bring out some bucks," I thought to myself.

Then, just as the sun barely illuminated the landscape before me, I watched as a group of deer trotted not 100 yards away. My presence went unnoticed and I began to raise my rifle. Through my scope I could see antlers protruding out of the deer's skull. My crosshairs settled on the buck's vitals and I slowly pulled the trigger. Not 10 seconds later, the deer lay motionless.

I was elated with my spike buck. 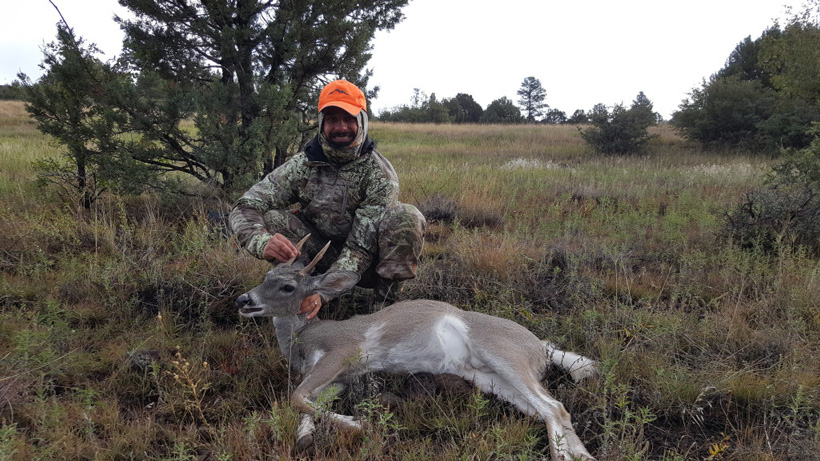 After I shot that buck, I was so pumped and as soon as I got home I started posting pictures online. Most of the feedback I received was positive, but there were a few people that were taken back by my "small" accomplishment. I couldn't believe it. Some part of me wished I had never posted the buck’s picture. Another part of me was downright angry. After all of the hard work I had put in, I finally succeeded and was met with some degree of backlash.

Since then, I started paying more attention and was appalled. Every single year, I watched hunters get bashed for shooting small bucks on social media. It didn’t matter if it was shot with a bow, crossbow, or rifle—they were excited about their accomplishment, wanted to share it with people and, inevitably, got stomped by some individuals. I saw comments like, "Oh, come on. He's still got milk on his lips." That is not how we build a strong community. Congratulate the hunter. That small buck means something big to them. It's positive reinforcement in full swing.

There is, of course, a cycle that we go through as hunters, right? Something like the evolution of a hunter. I can remember before I killed my first deer and how desperate I was to do so. Once I did, I was met with a huge burst of confidence. It let me know that I could actually do this and keep growing as a hunter. I was no longer stuck in a pit of discouragement. I was invigorated and wanted more. The next year I shot my first buck with a bow. A small forked-antlered mule deer. That was a monumental step for me and one that I'll never forget. The same thing happened with the Coues buck, too. Most of the feedback I received was positive, but there were also some that passed negative judgment my way for it. This past season, I actually felt contentment with not going after every single buck that I had seen. I wanted to stay out there longer and help out friends of mine. The same joy greeted me as I watched them stalk various bucks. It was a natural progression and I'm still in it. Towards the end of the season, I was rewarded with a beautiful mule deer buck of my own to take home. 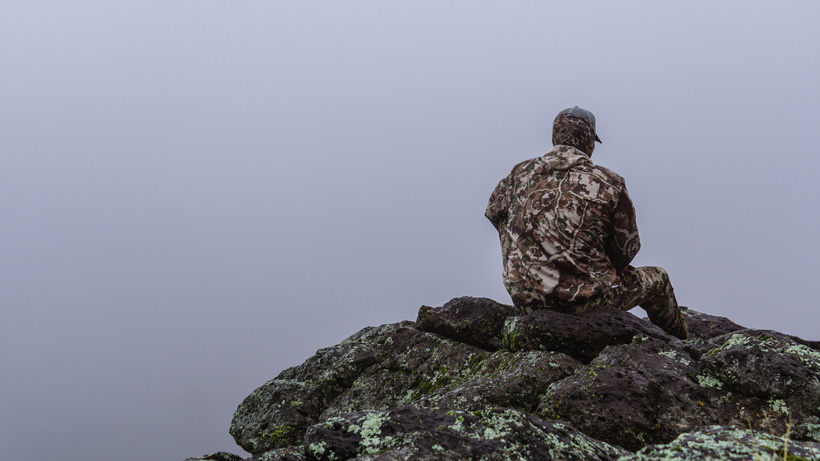 The title above shouldn't even be an idea. If you are part of hunting forums or the social networks though, you very well know that it is. It's a sad truth and one that can hopefully be rectified over time. I know that might just be wishful thinking, but a guy can hope, right? Hunters aren't just judging others for shooting small bucks either. I've seen insulting remarks based on weapon choice, camo choice, if the animal was taken near a road, etc. All of it is adolescent and not a very inviting thing for new hunters. It's also not a good image to the antis out there looking for any bit of fuel they can to bring us down. While they are doing what they can do to try to end our way of life, we are bickering over someone shooting a small buck. Is that really what is most important to us as a community? It shouldn't be. 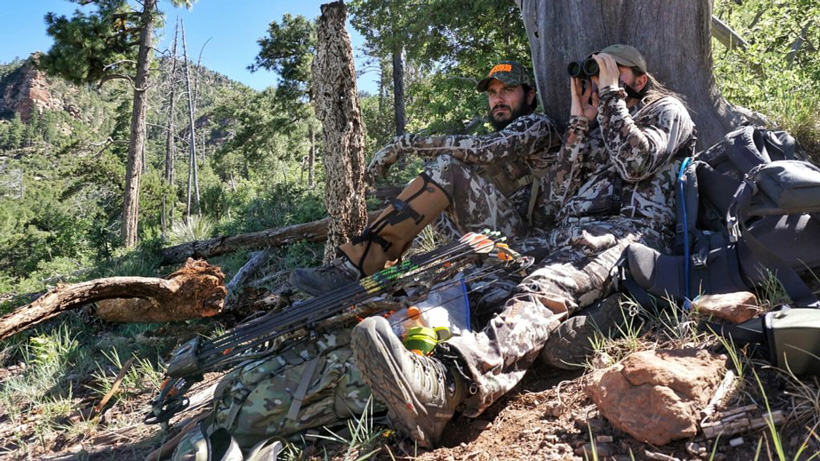 This is a big one. Hunters are not the majority in our population. We are the minority. How inviting do you think it is to someone who just shot a spike buck to have other "fellow hunters" judge him/her for doing so? That is not the recipe for gaining more like-minded individuals. We need to stick to a different recipe and welcome these folks with open arms. By gaining one new hunter, it shouldn't be looked at as only one. You just planted a seed that will grow out into other directions. Hunting can be passed down to their children and their friends. It's another voice in a crowded room. It is our responsibility to water that seed and encourage that growth. Many of us were introduced to hunting from someone else—whether it was your best friend or your dad. They, too, learned it from someone else. This is a chain and the more links we add, the more reach we will have. 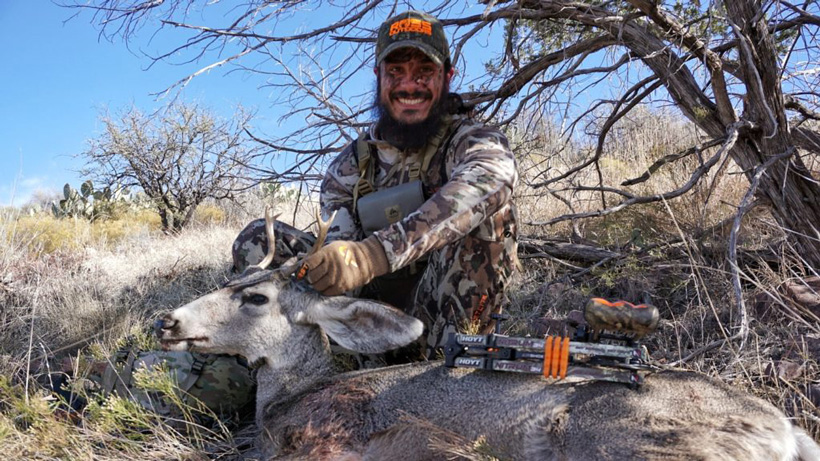 Hunting is not an easy feat. It takes a lot of time and dedication in order to be successful regularly. It takes many hours of researching and learning and even more hours and miles we put on our boots and optics. After all of that hard work, when it does pan out for you, please be proud of your accomplishment, no matter the size of antlers. You just took an animal's life. No more will that buck graze on that hillside. A part of that very landscape is coming home with you in order to nourish you and your family as well as be the topic of many future nights around a crackling fire. Hunting is more than just big antlers and thick hides. It's about reflection and hitting the reset button. It's about making the best of memories with the ones you love. It's about appreciation. Be grateful for the opportunities that we have before us and be grateful for those small bucks and bulls out there. They build big memories and die-hard hunters.