Forests — Don't love them to death 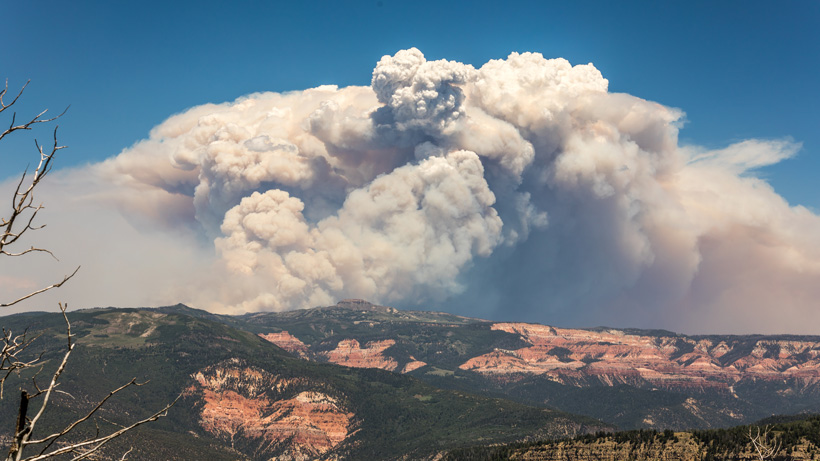 Article republished with permission from the Boone and Crockett Club.

“Love It to Death” is the third album by the Alice Cooper band, which was released in 1971. Loving it to death is how we, as a nation, seem to be treating much of our public lands, especially our national forests.

More people are engaging in and having a greater influence on natural resource issues than ever before. People want to do what is best, yet are not necessarily familiar with what that is. There is a growing belief that “letting nature take its course” with no human interference is the best philosophy for managing natural resources. Many people are mistakenly or intentionally calling this way of thinking conservation, though it is more closely aligned with preservation.

These misconceptions are helping to shift the management of wildlife and its habitat from a “hands-on” conservation approach to a “hands-off” preservation approach that has serious negative implications, such as the wildfires we are witnessing across the United States. Imagine if we approached health care for humans the same way as we approached the health of our natural resources. Our life expectancy would be cut by at least a third. Relatively simple surgeries would be no longer. So, our quality of life would suffer. Is that what we want? I certainly don’t.

Conservation was developed and nationalized by the Boone and Crockett Club and its founder, Theodore Roosevelt, beginning in the late 19th century. One of the Club’s founding members, Gifford Pinchot, also the first chief of the Forest Service, is credited with first using the term “conservation.”

One of the best-known advocates of preservation was John Muir, who founded the Sierra Club and fought for Yosemite to become a national park in 1890. He believed scenic forests and mountains were sacred, sublime places that should be used only for enjoyment and inspiration and not as a resource for goods. Muir and other early preservationists saw only one choice for saving awe-inspiring landscapes – keep people out unless they were there for appreciation and solitude. It was the beginning of a national controversy that pitted Muir’s idea of preservation against conservation. We are still having this national debate 125 years later.

Nationally acclaimed wildlife biologist, Dr. Bruce D. Leopold, once said, “Nature just can’t take its course because frankly, there is no location on Earth where humankind has not had an impact. From radioactive materials and dust in polar ice, to ever-expanding distributions of invasive species, the evidence is clear that disruption of natural processes is a global phenomenon. Humans are a significant component of natural ecosystems (contributing the good and the bad) and the notion of suddenly removing their influence is both illogical and impossible. Natural ecosystems are just too altered to be left alone.”

In August 2017, over 650,000 acres were burning in the Western U.S. Most of these fires were on public lands, particularly federal lands. By September 1, seven hundred wildfires raged in the state of Montana alone, ravaging some 1 million acres of public and private lands. The Club evacuated its own Theodore Roosevelt Memorial Ranch in Montana on September 12 as two wildfires were approaching the 6,300-acre property. Across the state, evacuations were taking place, structures were being burned, people were breathing hazardous air, federal and state resources were stretched thin and the state of Montana was out of money. Most tragic…two young firefighters lost their lives. And now, California is on fire.

What caused this wildfire phenomenon? Why, over the course of the last two decades, have wildfires intensified to the point of being natural disasters? What are the impacts on the people, landscape, wildlife, economies, and state and federal budgets and personnel? What can be done to correct this destructive situation going forward?

National forests comprise a large segment of the ecosystems in the western United States. Most have evolved with fires, insect and disease outbreaks and blow-downs to retain biodiversity and forest health. But, times have clearly changed. More people are living further out into wild-land urban interfaces. To protect lives and homes this has logically led to a forest policy of suppressing natural fires and insect outbreaks. This intolerance of fires combined with decades of relying on our forests for timber production and then dramatically scaling this back, have helped produce very “unnatural” conditions of fuel buildup ripe for the wildfires we're seeing today.

These unnatural conditions are resulting in wildfires that are destroying human lives, forests, wildlife habitat and homes and contributing to changing the climate. Wildfires emit carbon that contributes to poor air quality. Healthy forests, as well as forest products, are a carbon sink, sequestering carbon that would otherwise be emitted into the atmosphere.

More than 60 million acres of national forests are at high risk of wildfire or in need of restoration. In the past 10 years, over 65 million acres have burned. Approximately 10 million acres burned in 2015, killing 11 firefighters. Federal foresters estimate that an astounding 190 million acres of land managed by the Departments of Agriculture and the Interior are at an unnatural risk to catastrophic wildfire.

Conservation can reverse these conditions through a variety of actions, such as harvesting trees and using controlled burns to mimic natural disturbances. These disturbances reduce build-ups of forest litter (fuel) and overgrowth to encourage a variety of successional stages for wildlife, biodiversity and the prevention of larger, hotter, more devastating fires from occurring that can destroy even old-growth forests. Preservation takes the opposite approach. It seeks to halt management actions and multiple use on the mistaken assumption the forests can and will return to their former “natural” condition.

The conservation principles of sustainable use and active management has the greatest chance of producing the goods and services that people want, as well as retaining long-term ecological integrity. Conservation provides the means and knowledge to produce timber from the most productive growing areas to meet much of the demand for wood products while allowing less intensive management over the majority of the forested landscape. This enhances biodiversity while localizing the impacts of our demands for these products. We have the ability to locate and manage intensive industries (such as energy development) and urban growth so that it aids conservation — consolidating daily life and extractive industries in some places allows other places to produce the benefits of wilderness, scenery and wildlife habitat.

Using 21st-century techniques by land management professionals – and not direct mail specialists and litigators – we have the technology and know‑how to restore America’s cherished landscapes back to a healthy, natural condition. Through the use of environmentally smart thinning, prescribed burns and other scientifically validated management practices, overstocked forests can be returned to a natural balance, reducing the risks of catastrophic wildfire and insect and disease infestations along with the associated expenditure of dollars.

It is time we returned the management philosophy of Roosevelt and Pinchot – conservation that is – to our national forests. Pure preservation is not working in many places. In order to leave the next generation of Americans a national forest system that is in the best health possible, we need to make sure it has the best care possible. Right now they are running a pretty high fever from a spreading cancer because we are loving them to death. The time for treatment is NOW, not after we have lost another million acres of wild places and the wild things that live in them.

James L. Cummins is a vice president of the Boone and Crockett Club. The Club was founded in 1887 by Theodore Roosevelt. The Club, through Roosevelt and these early leaders of the conservation movement, saw a crisis in humanity’s impact on wildlife and their habitat and called people to action to change North America’s direction. The Club’s initial efforts were aimed at the development and passage of the Timberland Reserve Act in 1891, which began the national forests. The Club worked to develop the Yellowstone Park Protection Act, and played a major role in establishing Glacier National Park, Denali National Park, Holt Collier National Wildlife Refuge and the Theodore Roosevelt National Wildlife Refuge, to name a few.