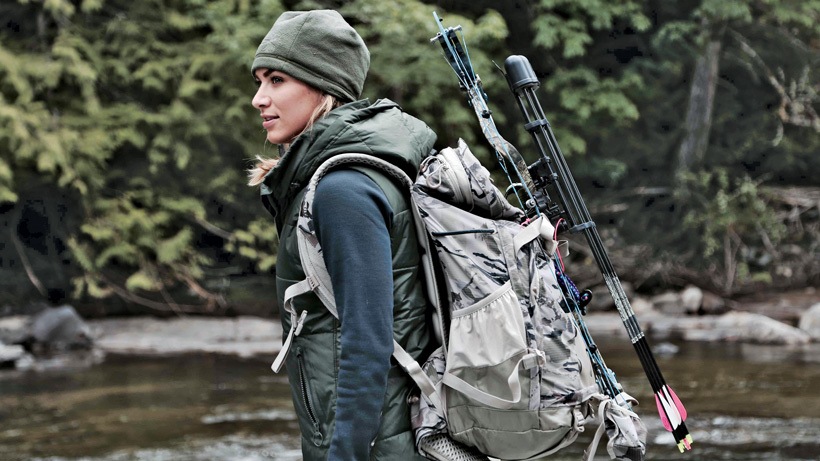 Over a landscape patterned with fields and forests, magpies and crows fly high above Saskatchewan, a Canadian province north of Montana, where whitetail deer, elk, moose and caribou roam. It’s also where Eva Shockey spends her downtime, hanging out with family at deer camp each fall, sharing her love of nature with her eight-month-old daughter, Leni Bow, and exploring the vast outdoors. Known for her charismatic charm as co-host of father Jim Shockey’s popular hunting show on the Outdoor Channel, Jim Shockey’s Hunting Adventures, Eva has evolved into a passionate hunter who is a vocal advocate for the positives of living a hunting – and outdoor-based – lifestyle. 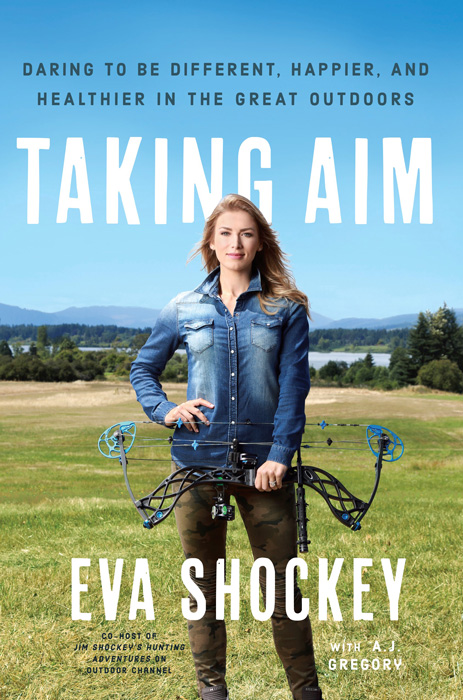 In her new memoir, Taking Aim: Daring to Be Different, Happier and Healthier in the Great Outdoors, published August 29, Eva documents her journey from non-hunter to hunter and discusses her experiences candidly, incorporating what she believes is the true meaning of hunting throughout the story: spending time with family and friends outside and honoring and respecting the animal harvested.

Recently, she put down her bow and arrows to talk with me about conservation, being a role model to so many, and how she’s adapted her hunting lifestyle to fit her growing family.

goHUNT (gH): Let’s start off with something simple. What is your favorite big game animal to hunt?

Eva Shockey (ES): I love hunting anything that's got a bit of an adventure involved. Moose up in the Yukon is one of my top favorites. I also love whitetail season in Saskatchewan. If I had to hunt one animal for the rest of my life, it would probably be whitetail deer.

gH: Do you focus primarily on trophy size or consider yourself a hunter for food-based reasons?

ES: It's definitely more related to filling the freezers, providing for myself and for my family. It's also about trying to select the oldest buck if I'm hunting whitetail. I try to get the older male because they're past breeding age. It's not necessarily about antler size.

gH: Where is your favorite place to hunt?

ES: The Yukon in Canada is my favorite. I go there every fall with my dad for moose, caribou and grizzly. Internationally, I love places that are really different from anything we have here in North America like Namibia in Africa.

gH: Do you have a weapon preference? What is your favorite gun or bow model?

ES: I grew up using a gun and, then, as I got older, I started shooting a bow more often. I love both because they're both very different: different seasons, different experiences when you're hunting. I like shooting a bow specifically because you can do it in your backyard every single day and it doesn't take a lot of space or time or effort. You can just go and shoot a couple of arrows, then hang it back up and go out the next day.

My bow that I shoot is actually the Eva Shockey Signature Series by Bowtech, which is a serious female archer's bow. As far as guns, I shoot a Daniel Defense. They're my favorite gun company and I shoot all of their guns.

gH: What is your hunting philosophy?

ES: I am always respectful of the animals and have an appreciation for them as we fill our freezer and provide for our families. At the end of the day, those animals deserve our respect. I try to keep that in mind from the beginning all the way through to the end of the hunt.

gH: Who is your favorite hunting buddy (aside from your dad)?

ES: (laughing) My husband. Now it's sort of a competition to see who the hunting buddy is because I grew up hunting and traveling with my dad on his hunting trips and when I started hunting, he was obviously my hunting buddy. Now I'm married to a hunter as well and we hunt a lot together, but it's my favorite when it's the three of us all together.

gH: Let’s switch to conservation. Obviously in your travels, you’ve come across different methods and projects and opinions about hunting and conservation. What’s your take?

ES: Conservation is the basis of why hunters do what we do. We're raising money for habitat management, wildlife management, etc. across North America and across the world, really. When people try to argue against hunting and what hunters are doing, they're not looking at the fact that, as hunters, we raise the most money for conservation of any other group on this planet. Hunters have had such an impact on wildlife. About a hundred years ago, there was half a million whitetails remaining and now there's more than 32 million. That alone shows the importance of conservation programs that have been aided by hunters.

ES: They're really not that far apart even though it seems like they should be. It's a method of bringing jobs, providing food, providing work for local people. A big part of hunting overseas is that the hunter will hunt an animal and then donate the meat to the locals, to the families and to the workers and guides and whoever else needs meat. It's a positive thing for the people and the hunters.

ES: It doesn't differ a lot actually. Hunting across the world ultimately is about camaraderie. It is about filling the freezer, providing game meat for yourself and your family. It’s about self reliance and, in general, healthy living. In my travels, everywhere I've ever gone, that seems to be what they believe in, too.

gH: You’ve been the target of anti-hunters. How do you deal with that?

ES: There's an entire chapter about this in my book. It talks about the hatred I've received doing the job that I'm doing and being in the outdoor industry, especially being a female in the outdoor and hunting industries. The actual chapter and, really, the whole book, are meant to open people's eyes up to what we're doing as hunters. If someone decides to not hunt, that is their personal choice. But there’s no reason to attack responsible hunters and make threats. If you wear fur, leather belts, shoes and jackets, carry a leather purse with a leather wallet, have a leather couch or if the interior of your car is leather, you’re not anti-hunter. You’re just misinformed. 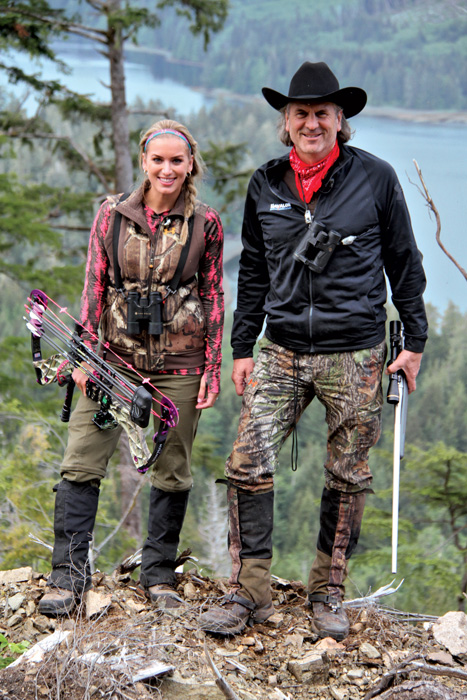 Eva and her father, Jim Shockey.

ES: To have a platform where my voice can be heard by a lot of people is pretty incredible and I feel very fortunate to have it. I take it very seriously because I know I can use that platform for good or for bad and I try my very best to take into consideration that whatever message I'm going to put out there is going to be heard by a lot of people. I know that people are watching what I'm doing with my life and the message that I try to send is one of confidence. Throughout﻿ Taking Aim﻿, I write about daring to be different, going against the grain and just being secure in who you are even though you may have to break through some obstacles. I hope that anyone that is watching me sees that message and understand where I’m coming from.

gH: What is it like balancing motherhood with hunting trips? Do you have a support system? Do you take your daughter with you?

My husband and I believe very strongly in bringing her outside and letting her experience what we love about the outdoors. Eventually, we want her to be able to understand where her meat comes from at the dinner table and not take it for granted.

gH: Do you take her out in the blind with you?

ES: She's only eight months right now so it hasn't been deer hunting season since she's been alive, but she came out to bear camp with us in May. She will be coming to Saskatchewan. I don't think she'll be coming into the blind necessarily because you sit there for long hours, but she'll be coming to camp. And I'll probably bring my mom to help out while I'm out hunting. This weekend, we're going out to hunting camp and she's coming with us. It's just a lifestyle. Hunting is so much more than just the trip itself or the week you're out hunting...it's an entire lifestyle. We're trying our very best to start her off in the very beginning so when she is two or three, it's not a shock to her. She'll already be used to going on quads, going on trips, going hiking – that’s just the lifestyle we like to live: an outdoor, healthy lifestyle.

gH: What type of advice would you give a beginner hunter?

ES: Hunting doesn't discriminate between who can be a hunter and who can't. People do and that's just a matter of ignoring people who are negative or judgmental and that goes with any life lesson. You can always ignore people like that who are trying to judge you. In the same way that I'm encouraging young girls to get out there and have the confidence to say, "I can be a hunter. I can be feminine and ladylike and classy, but I can also wear camo," it’s important to know that a hunter doesn’t have a specific look: you can be male, female, young or old and it doesn't matter – what matters is that you want to get out there and you want to try it.

The hunting community is a very welcoming group of people. We're all very passionate about we do, about hunting and living a healthy lifestyle. Anyone that comes to me that says they're interested in hunting, I will sit with them and encourage them and talk about it. If I can share any knowledge, I do that and I know others are the same way. So just get out there and try it. Go to your local outdoor retailer, go on social media and follow some hunters, go find your local archery range and tell them you're interested. That's the first step. And I guarantee they will welcome you with open arms.