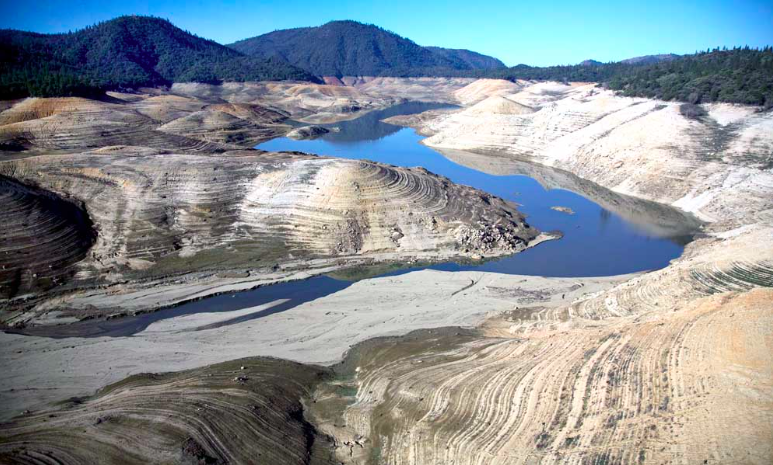 [Source: Department of Water Resources]
The south fork of the Feather River in California

Whatever word you want to use to describe the western drought, one thing is clear, it is severe. So severe that experts say 2014 is tracking to be among the driest years on record. Reservoirs are at half-capacity, the mountain snowpack is scarce, and numerous counties from Oregon to Texas have declared emergencies. Without sufficient resources, hydroelectric turbines cannot produce as much electricity, farmers are struggling to take care of their herds and crops, and states are scrambling to find alternative sources of affordable drinking water.

Yes, the economic and social impacts of the drought are undeniably dire. But humans aren't the only ones impacted by the prolonged drought. Just like us, wildlife depend on rain, rivers, streams and snow for survival. When a drought occurs, animals' food supply can shrink and their habitat can deteriorate. Sometimes the damage is only temporary and their habitat and food source can be rebuilt when the drought is over. But when the drought is as severe as it is now, the impact on the environment can last a long time.

As scary as it sounds...it could last forever.

With water resources diminishing, a "domino effect" takes place in the ecosystem. It begins with the forage. As the drought becomes increasingly severe, vegetation growth is thwarted. Without the necessary water resources, plants reduce new stem growth and previously produced stems will shrivel and die. Diminished plant production reduces food availability for herbivores like moose, elk and deer, and it also reduces populations of insects, reptiles and rodents which are the primary food sources for a number of carnivores like coyotes, bobcats and mountain lions. 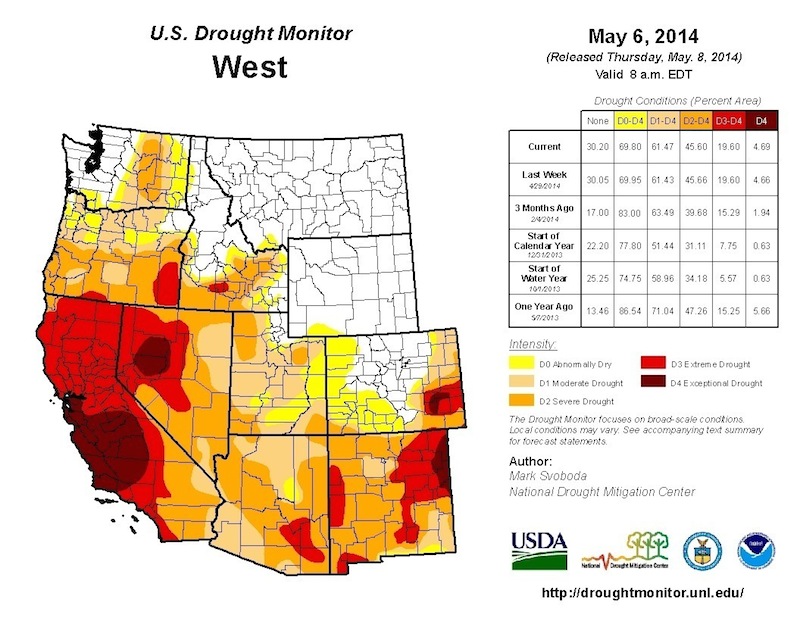 [Source: U.S. Drought Monitor]
More than 60% of the West is experiencing some level of drought in May 2014. The entire states of California, Nevada, Arizona and New Mexico are in 100% drought.

[Source: U.S. Drought Monitor]
Almost 70% of the West is still experiencing some level of drought in June 2014. The entire states of California, Nevada, Arizona and New Mexico are in 100% drought.

With less food available, animals are forced to rely on their body's fat reserves. For many animals, this is simply not enough, and their health suffers. This past December, the CDFW Wildlife Investigations Lab (WIL) began recording mortality rates of young red-tailed hawks in the central and southern regions of California. Research found deteriorated physical condition and secondary bacterial or fungal infections.

Even when animals are able to find forage during the drought, the plants they consume are generally void of nutritional value. This is a particular concern for deer and pronghorn. Without proper nourishment, mothers are not able to produce enough milk, and are therefore unable to to keep their young alive. The young that manage to survive tend to be smaller than normal, generally not putting on enough fat reserves. And if the coming winter is harsh, they are less likely to survive it, and those higher death rates can be severely damaging to the population as a whole.

Some nocturnal species like raccoons and opossums will become active during the daytime in search of sustenance. This added effort puts a strain on the animals, making them more susceptible to exhaustion, predation, and even starvation. Other animals will travel great distances in search of more favorable conditions. Not only does the journey further reduce the animals' fat reserves, but the new habitats become overcrowded and ultimately harmful to the the animals' health.

The WIL recently studied several avian cholera outbreaks throughout California. High temperatures and low rainfall has reduced the amount of habitat available for many species of wetland birds like waterfowl, forcing them to become concentrated in areas where water still remains. Under these conditions, bacteria can replicate at incredibly high rates and produce dangerous toxins. The birds ingest these toxins by feeding on organisms that feed on this decaying matter or by drinking infected water.

While it is true that wildlife populations are resilient and able to recover from drought once normal weather patterns return, scientists have recently discovered some disturbing news. According to new research looking at tree rings in the Rocky Mountains, things aren't going to get better anytime soon.

In fact, things could get much worse. 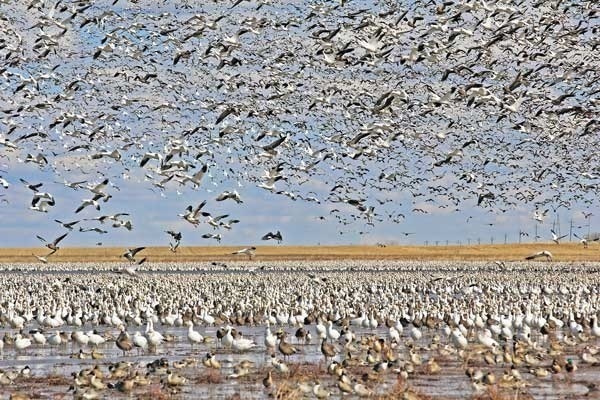 Climate and stream flow records can only provide information for the past 100 years. To place this drought in the greater context of history, Brigham Young University geography professor Matthew Bekker analyzed rings from drought-sensitive tree species in the Weber River basin. By taking samples cores from Douglas fir and pinyon pine trees, Bekker and his team were able to build a tree-ring chronology that extends back 585 years into Utah's natural history. They discovered that the year 1703 began with 16 consecutive years with a below-average stream flow, that the Web River flowed at only 13% of capacity in 1580 and fell below 20% in three other periods, and that the most severe drought in this time frame hit in 1492.

So just how important are these historical records? Very. They not only give context to the scope of the current drought, but shed light on the possibilities of how severe the drought could actually get. And with that understanding comes the opportunity to take precautionary measures.

"We're trying to work with water managers to show the different flavors of droughts this region has had," said Bekker. "These are scenarios you need to build into your models to know how to plan for the future."

Indeed, there's no telling what the future holds. But if we can learn from the past, we can better prepare ourselves for what may come. And for both humans and animals alike, that can make all the difference.