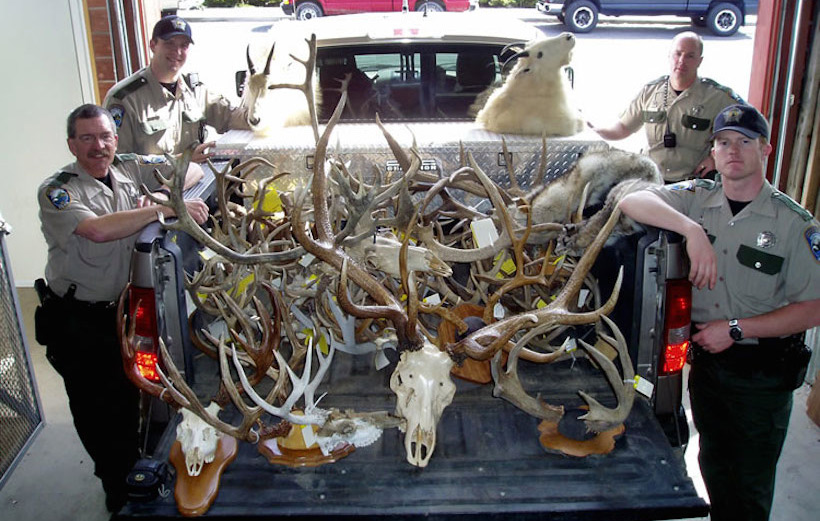 Poachers devastate wildlife by breaking laws designed to assure proper management and species survival, and sadly, it comes at the expense of the vast majority of hunters who play by the rules.

As poachers raise their level of lawlessness to new heights, judges are responding with bigger fines and longer jail times.

Here’s a look at some of the biggest poaching cases and biggest penalties in recent history. Warning: Some of these cases may make you really angry. 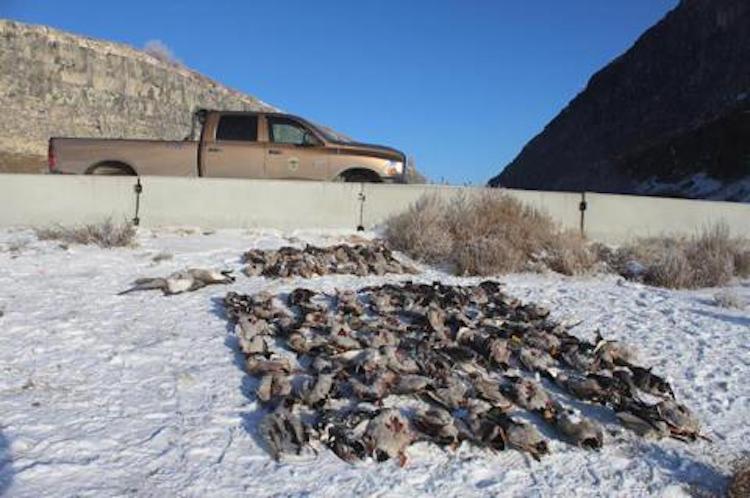 107 mallards and two geese were dumped near a road in Idaho which puts lawful sportsman in a bad light. Photo credit: Idaho Fish and Game

In 2007, the owners of North Dakota’s Sheyenne Valley Lodge — Orland Mertz and his son, Theodore — were charged with a number of federal game violations including the unlawful transportation and sale of wildlife.

The Mertz’s clients would pay between $1,600 and $2,000 for a three-day upland game and waterfowl hunt at Sheyenne Valley Lodge. The guides would take clients on morning and evening waterfowl hunts, even if the clients had shot their limits in the morning. The Mertz’s also instructed their guides to falsify harvest records to cover up the excess number of ducks and geese brought back to the lodge. Most of the clients who flew into Bismark would leave without taking their birds. The guides, then, would pitch the excess duck carcasses into dump pits, where officials found the bodies in various stages of decomposition.

The presiding judge ordered the Mertzes to pay $90,000 in restitution. He also sentenced them to two years of federal probation each, suspended their hunting privileges in North America for two years and banned them from guiding or outfitting in the United States for life. They were also ordered to surrender two shotguns. The case also involved seven guides and 94 hunters from 27 states. The total in fines and restitution amounted to a whopping $120,000.This was the most significant wildlife prosecution in North Dakota’s history. 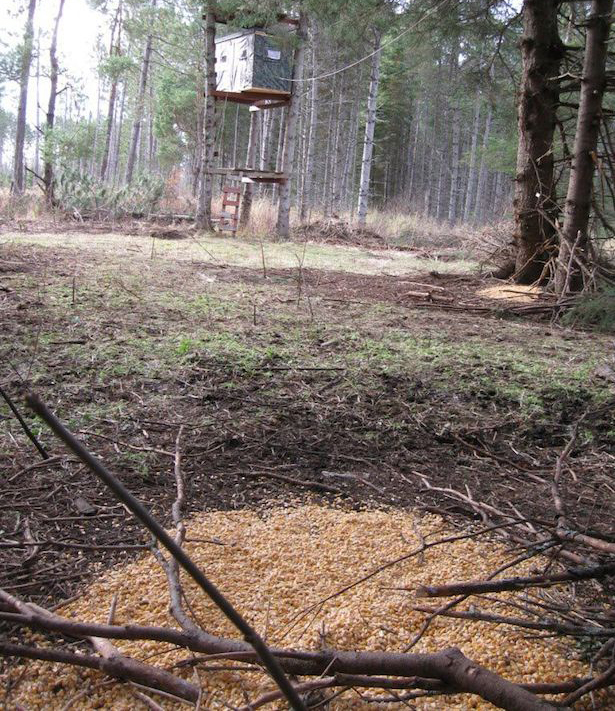 In one of Wisconsin’s largest illegal hunting probes in history, 48 people from 11 states were charged with violating state game laws.

Prosecutors alleged that between 2002 and 2005, the outfitter and guide who organized the expeditions, Adam Lee Lawinger of Blue River, Wisconsin, illegally baited deer in chronic wasting disease control zones, where baiting is prohibited; guided individuals without hunting permits to kill does in Earn-A-Buck zones, where hunters must kill antlerless deer before they can take a buck; repeatedly used female deer bodies to register multiple bucks their clients took; transported and stored illegally obtained deer and turkeys; and allowed clients to take turkeys with a .22 rifle.

Lawinger pleaded guilty and was ordered to pay $73,534 in fines and restitution and was sentenced to two years in prison. He was also banned from hunting, fishing or acting as a guide during three years of supervised release. The “hunters” were charged with violating a number of game and licensing laws, including hunting without licenses, hunting out of season and hunting over bait in Richland and Iowa counties, where baiting is illegal. 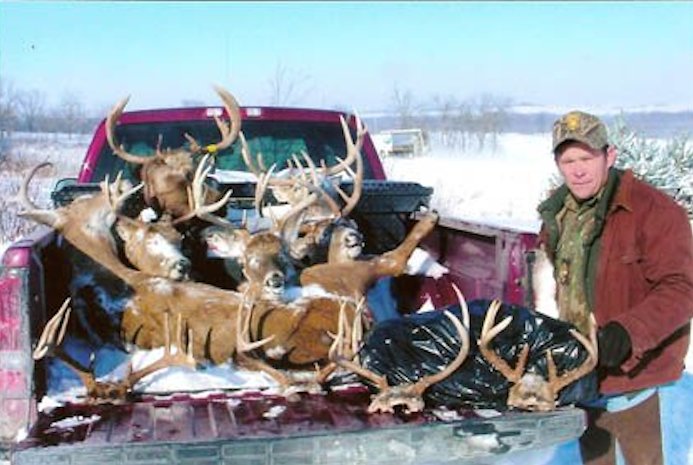 In 2005, Travis Umbdenstock of Cedar Rapids, Iowa, and Tim Hansel, Jacob Hansel and Josh Hansel of Mantel, Iowa, were charged on 23 different counts, including unlawful possession, unlawful means of taking deer, unlawful transportation of deer and not having valid deer licenses.

The four men took 12 deer — 11 bucks and one doe — illegally. Based on the size and spread of the antlers, officials said that three of the deer would be trophy bucks for someone if they had been harvested legitimately. Officers with the Iowa DNR and the Jones County Sheriff’s Department searched the Mantel residence and seized parts of the deer as well as 14 guns and one bow.

Umbdenstock and the Hansels all pleaded guilty to all charges and were ordered to pay $63,000 in fines and restitution, had their hunting privileges suspended and were listed as habitual offenders with the Iowa Department of Natural Resources. 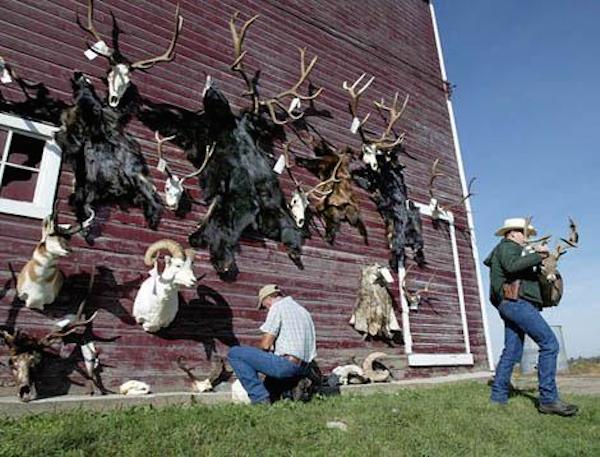 In 2010, James Mockerman of Hamilton, Montana was found guilty of running an illegal outfitting operation for almost a decade. Court records said that Mockerman would advise clients that if they encountered other hunters, they were to claim to be his wife’s relatives. They were also to keep away from roads to avoid being seen by neighbors. Mockerman would supply his clients with two-way radios, telling that while it is illegal to use a radio to pursue game, it was unlikely they would be caught. They were also told to refer to any elk they spotted or took as “Ed.”

It is estimated that Mockerman took 67 clients hunting illegally, spending at least 400 days in the field with his clients. He was ordered to pay $54,346 in fines and restitution, and was sentenced to a 20-year suspension of hunting, fishing and trapping privileges in Montana and more than 30 other states, and received deferred imposition of a jail/probation sentence for three years.

Mockerman was the first person sentenced under the relatively new law that allowed the state to charge people involved in illegal outfitting with a felony. The law had been passed by the 2007 Montana Legislature as part of what was then called the “poachers package.” The case also cited 67 clients who had used Mockerman as an outfitter. All of these individuals pleaded guilty and paid a total of $25,000 in fines. 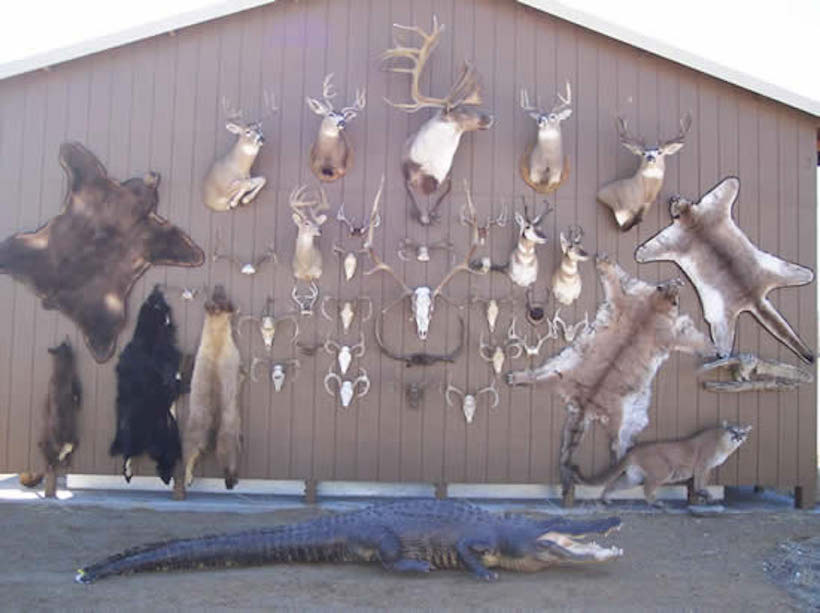 In a similar poaching case, Shawn Lar must pay roughly $15,000 in fines and restitution and 30 days in jail for poaching activities that involved 41 poached big game animals during a 14-year period in Montana and Alaska. Photo credit: Montanagamewardens.org

In one of the worst cases of poaching in Montana, Philip Mark Payton was found guilty of violating nearly every hunting law in the state. From 1990 to 2005, Payton ran a commercial poaching operation which resulted in the illegal harvest of 86 deer, pronghorn, elk, moose, black bear and mountain goats. He was ordered to pay $52,744 in fines and restitution and sentenced to 20 years probation and a lifetime suspension of hunting, fishing and trapping privileges in Montana.