Three of a kind - An Arizona elk hunt 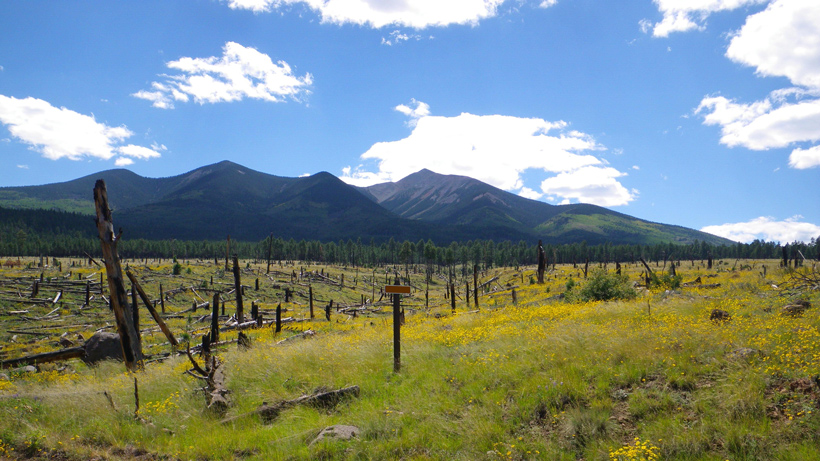 I drew an early Arizona archery elk tag in 2016 fortunate to return to a unit where I had previously filled a tag. I made a couple of scouting trips and hung some cameras in the backcountry. Spring outings revealed that dry range conditions persisted in juniper country.

Some areas of the unit were greening up faster than others and some areas had heavy elk utilization. My goal was to find areas where these favorable conditions overlapped. 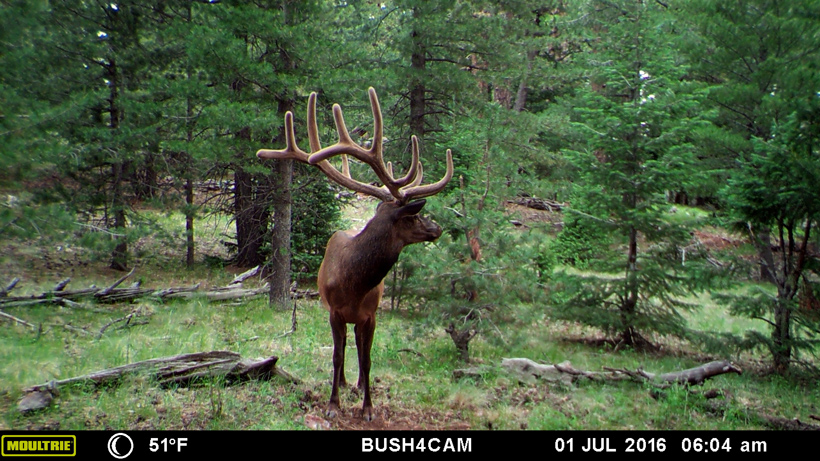 Several bulls were filling out nicely as the summer progressed. The big question became: Where will those bulls end up during the rut? 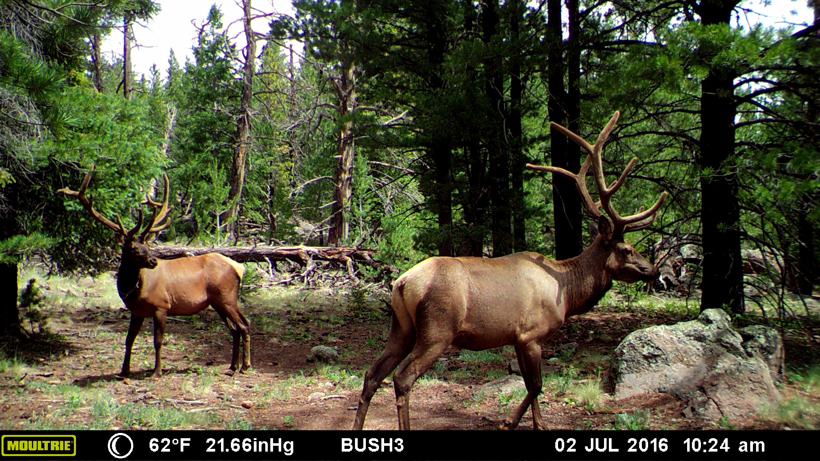 Like other western hunters I know, I judge overall hunt satisfaction by my ability to avoid hunting pressure. Typically, if I see other hunters I move onto plan B rather than compete for limited resources. My pre-season involved scouting numerous wilderness areas—everything from aspen meadows to old burn scars. I developed a plan, studied maps and aerial imagery, trained hard and practiced shooting tight groupings.

The first four days of the two-week hunt I chased distant bugles in the wilderness, gaining 1000 feet or more of elevation before daybreak. On day five, I hiked into the wilderness from camp and prepared to stay out until dark. I remained optimistic since I had been successful finding areas with fresh elk sign and without hunting pressure. I was a couple miles into the wilderness when I was surprised to see two hunters walking towards me. After nearly a week of solitude hunting the area, these guys appeared out of nowhere. I remember thinking, do I let them walk on through and not say a word? I decided, instead, to make conversation and I’m very glad I met Brad and Billy as you will learn later. Since they were a long way from their truck, we hiked to my camp and I shuttled them to their vehicle. I didn’t think much of the encounter at the time, other than my cooler contained fewer beers. 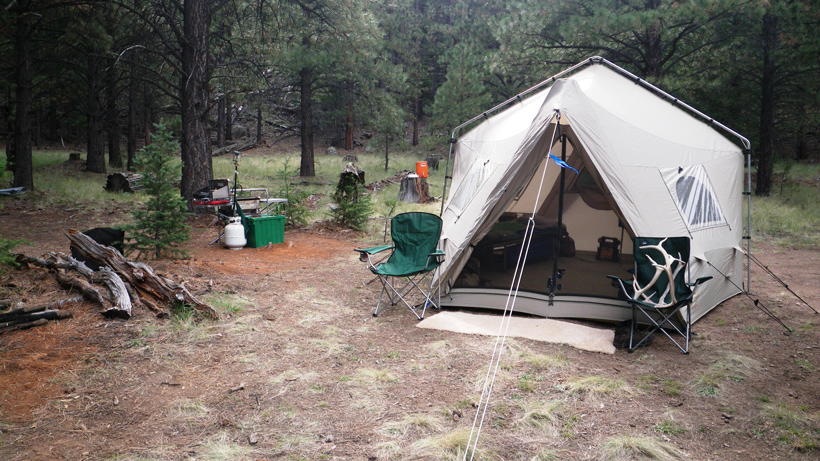 We kept in touch over the next couple of days to discuss what we were hearing and seeing. The late monsoonal moisture seemed to have the elk patchily distributed across the landscape, a pattern unfamiliar to me in that area.

On day seven, I received a text from Billy indicating he shot a nontypical 6-point. Photos and the hunt story came through late that night, and I was both discouraged and hopeful at the same time. I laid awake most of that night, dissecting the information that led to his success and how I could capitalize on the information. I learned that they remained highly mobile and had dropped several thousand feet in elevation from where we met. I started to question my steadfast strategy of hunting high elevation from a stationary base camp. 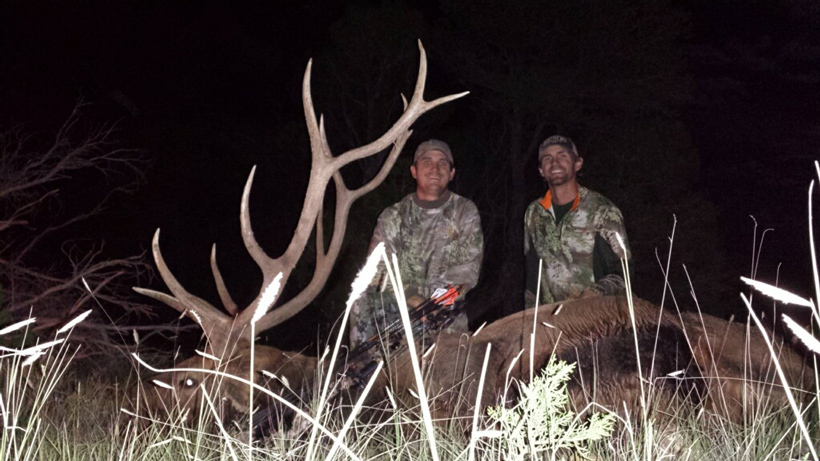 I decided that if I didn’t encounter vocal elk during my morning wilderness hunt, I would explore some new, lower-elevation areas during my evening hunt. Because I wasn’t entirely convinced that there was a better chance for success in the lower pinyon-juniper country, I decided against relocating my high-country camp.

During the next week, I chased bugles and had the occasional close encounter in the wilderness. By midday, I’d pack my truck and drive into juniper country to glass as much area as possible. I wasn’t returning to camp until well after dark. I’d drive 90 minutes or further from camp, but I was never further than 25 miles from camp due to rough roads. I managed to find an area in the junipers with recent elk sign that had greened-up from monsoon moisture more than other areas so I decided to focus my efforts there for the rest of the season. 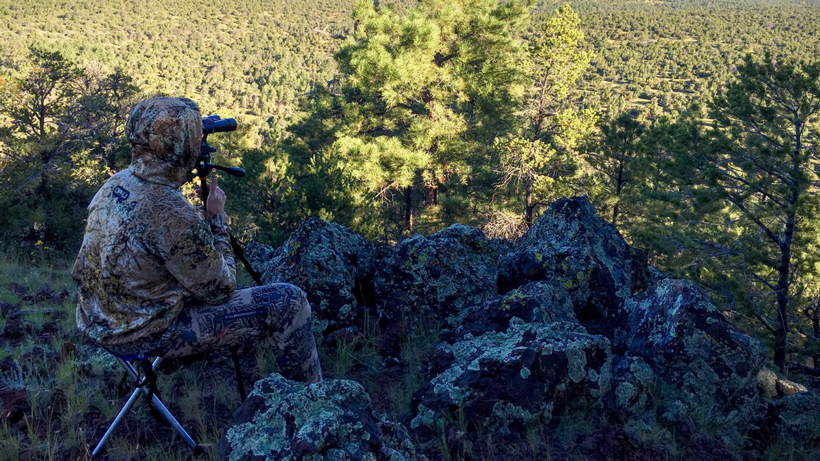 On the twelfth evening of the hunt, I spotted two spikes and a cow from about a half mile away. They cautiously traveled through the trees to the edge of a dirt tank. The group walked through the entire length of the waterbody and playfully enjoyed their cool-down swim. Even though it wasn’t my intention to fill my tag with a spike, I felt optimistic to return to the same area the following evening, owing to the lack of vigilance the elk displayed. 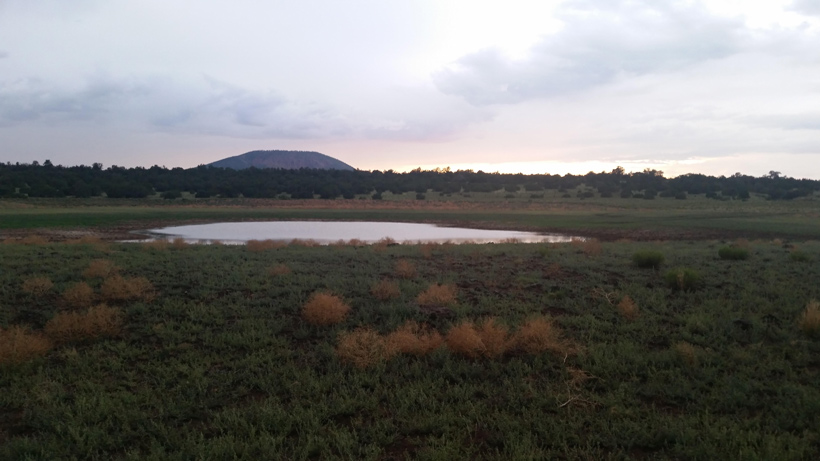 Once again, I spent my morning hunting a wilderness burn scar and was unable to get into range of some non-vocal bulls due to the steep terrain and shifting thermals.

The transition habitat between feeding and bedding areas in the wilderness was littered with new rubs. There is a line of three rubs just visible in the photo above. It was elk sign like this and enticing trail camera footage that continued to draw me back into the wilderness area. Rut activity seemed to be improving and so were my wilderness prospects! 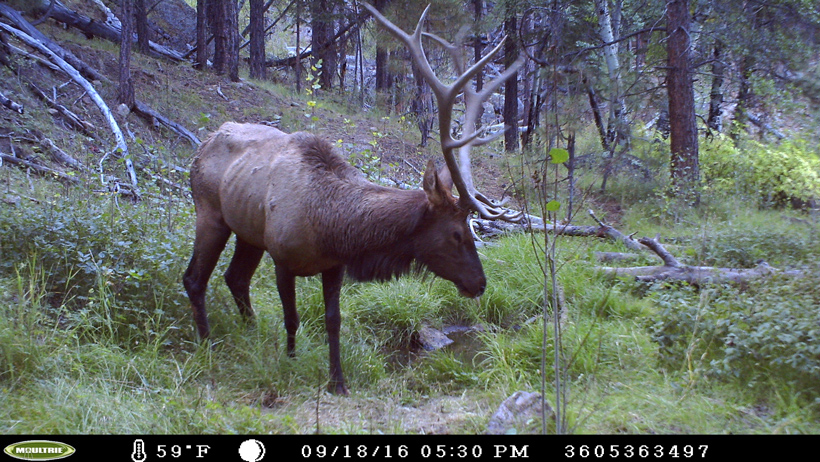 I returned to the dirt tank in the pinyon-juniper country for my evening hunt in an effort to capitalize on what I’d learned the previous evening. About an hour and a half, after I got settled into my blind, a bull silently stepped into view. He was about 60 yards away and was cautiously assessing whether the scene was safe. About the time I thought he was going to turn around and reverse out the way he came in, he committed to getting a drink. He quickly covered the 20 yards to water’s edge and loudly slurped while he kept a close watch on his surroundings. I patiently waited for him to look away before I drew my bow, but his focus never shifted from my direction while he drank. My window of opportunity to shoot at a stationary target had closed. He was headed upslope toward the trees. I quickly came to full draw and shot while he was quartering away at 45 yards.

As he stepped forward, I saw my arrow hit slightly further back than where I had aimed. After giving him some time, I followed his tracks and intermittent blood trail for less than 100 yards before I realized I needed additional light and supplies. On the hike out to the truck, I called Brad and Billy to tell them I had connected with a bull, but I was uncertain about my shot placement.

Brad and Billy showed up within the hour to help me track and butcher my animal as if they were lifelong friends. My arrow entered slightly back as I had feared, but because of the quartering away angle, I hit both lungs. The bull covered about 300 yards before he piled up. I was grateful I didn’t need to return to the kill site the following day to finish the job. I had never met two guys in the field who were more willing to provide assistance. As it turns out, hunter interaction isn’t something that should always be avoided. 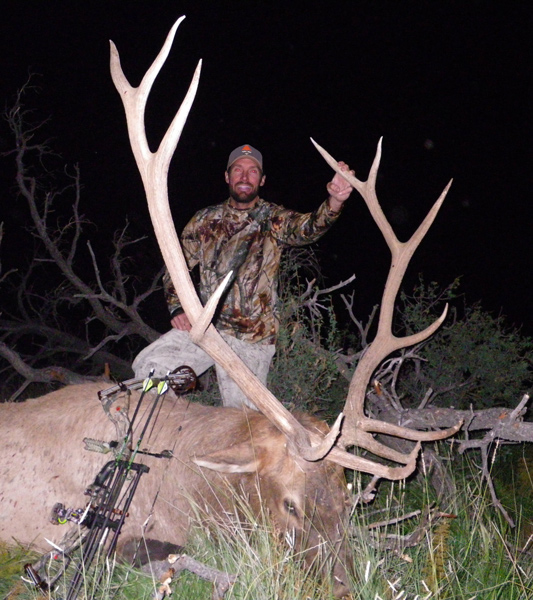 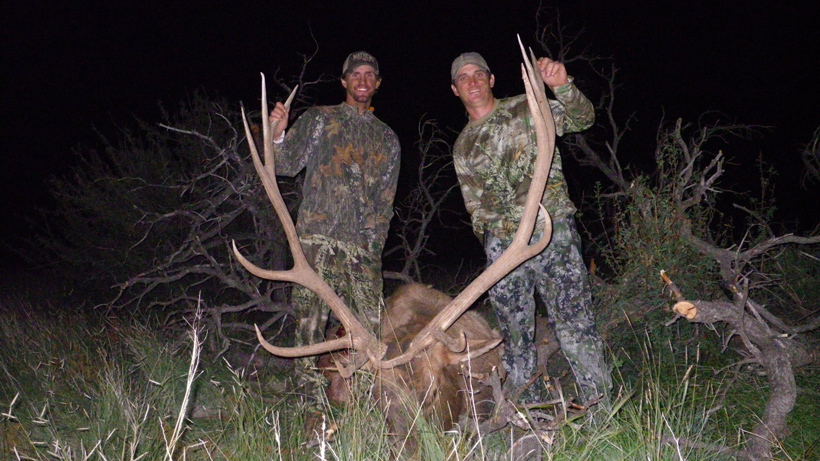 It was a long day in the field, but my motto is you can’t hunt hard if you don’t eat well. I finished off my day with a homemade pizza cooked over a campfire. The following morning I made a trip into town to drop my elk off at the butcher before breaking camp and heading home. On my way into town, I received a text from the boys. It read, “Bull down – can you help?” 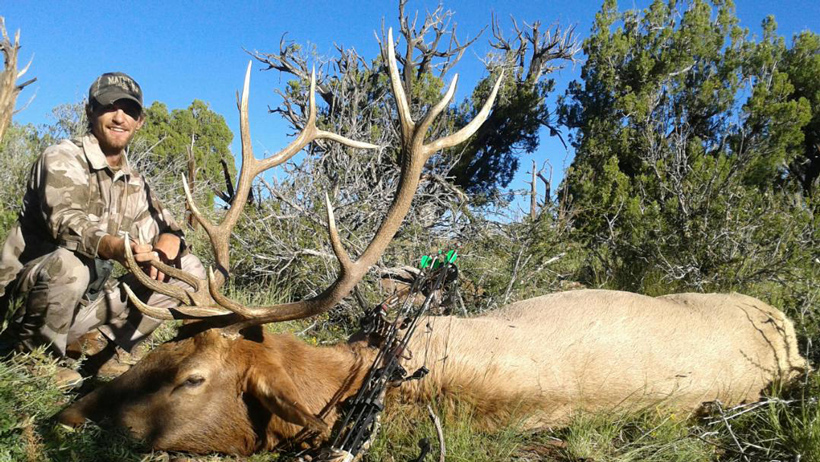 Brad and Billy had hiked into a new area that morning. They had just ridged out when they heard a not-so-distant bugle. Billy gave a series of convincing cow calls and coaxed the bull past Brad for a broadside shot at 30 yards. 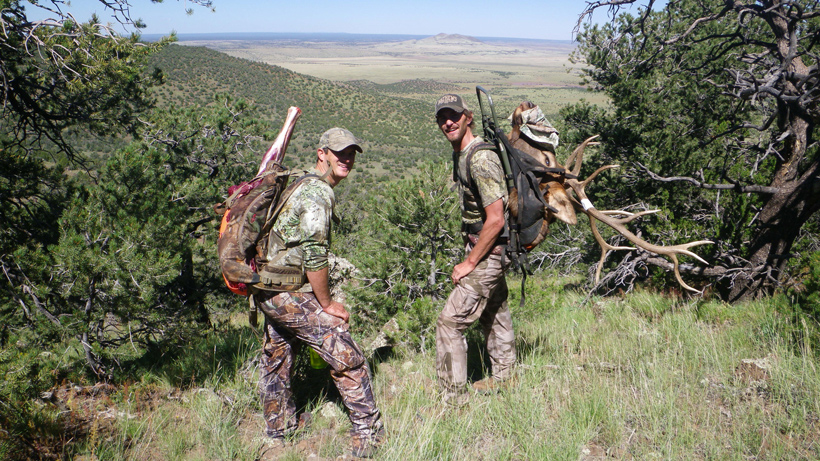 I met the guys at their truck, consumed some calories and we headed into the backcountry to do our final meat haul. For the third time in a week, the three of us made quick work of packing several hundred pounds of meat off the mountain. We were all very excited to have freezers full of prime cuts. Brad’s nontypical bull had some serious character; his left antler formed a tripod at the end of the main beam. To sweeten the deal, Brad found a pair of sheds that looked as though they may have been from his bull. 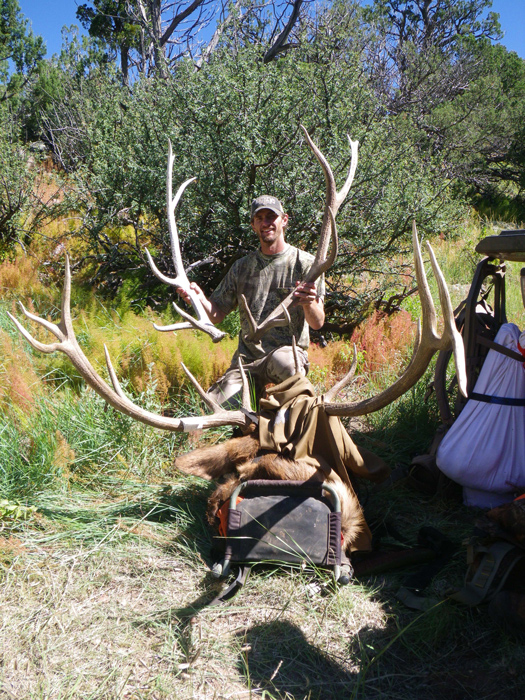 This hunt proved to be a valuable learning experience. Most notably, without our wilderness meeting, I wouldn’t have been able to detect the post-hunt pattern that became apparent once I plotted our kills on a topo map. While our animals were harvested over a vast area (up to 15 miles apart), all three bulls were harvested within 100 feet elevation of each other. While it could have been a coincidence, I now focus much less energy on hunting particular “spots” and, instead, spend much more time considering the underlying processes responsible for game distribution such as antecedent moisture patterns, feed availability, female dispersal, etc.