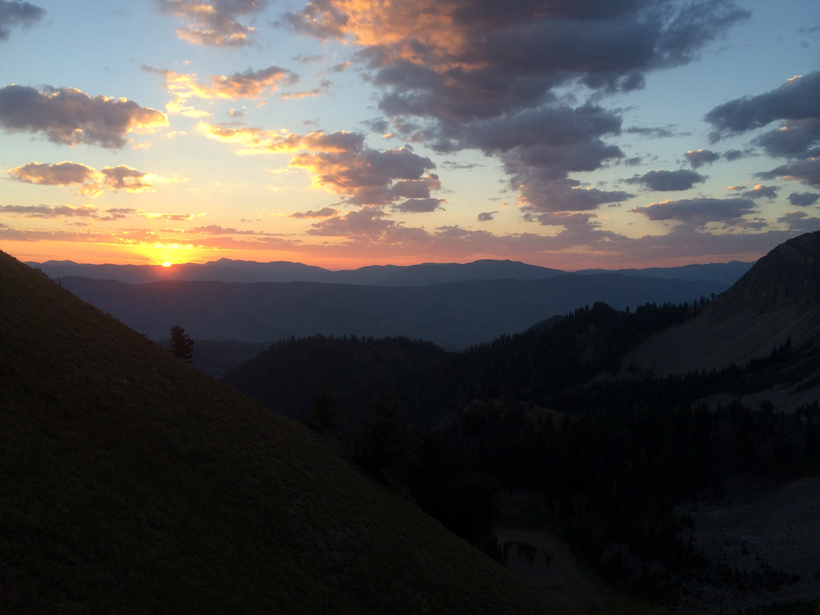 With how much I love hunting, it was hard for anyone to believe that I have never harvested any big game for myself. Although I have never tagged a deer of my own, I have had some unforgettable assists and come away with better-than-average hunting experiences. I did not mind being the spotter or the pack mule one bit because I loved hunting for everything else it meant to me. 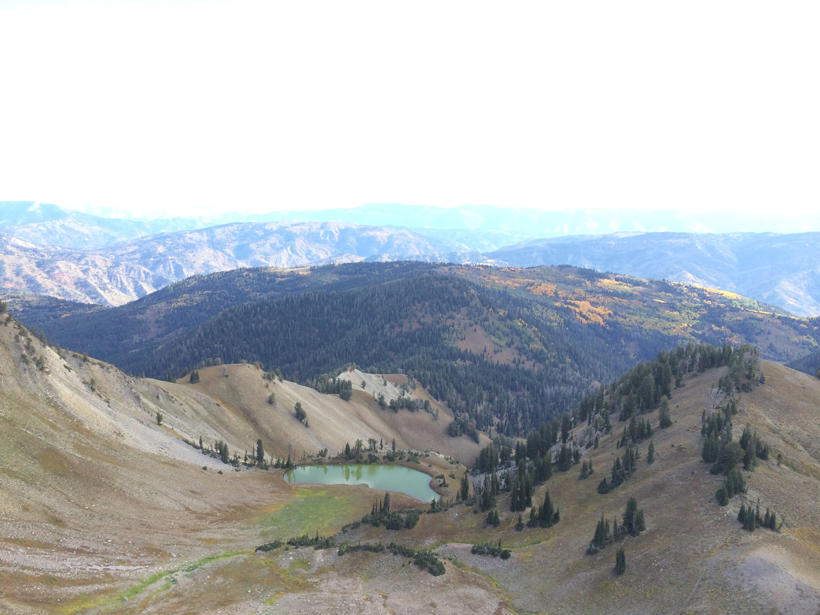 Toward the end of 2013, my family and I moved from Western Wyoming to Northern Washington for work. Being unfamiliar with this part of the country, days off were usually spent looking for new places to explore while spotting deer, shed hunting and fishing. Recreation maps and Google Earth were my everyday companions.

I drew a multi-season deer tag which meant I could bowhunt, muzzleloader hunt, and use a modern firearm as the weapon seasons progressed from September through December. I was excited to learn that in Washington, you can hunt blacktail, mule deer or whitetail. I was also fortunate enough to become friends with Gary Wood, an avid outdoorsman who grew up in this beautiful part of the country. I would often ask him about certain mountains or valleys that I explored on maps or screens. Over the summer months, Gary would take me out to set up trail cameras and scout for deer, showing me all of his honey holes. To me, that is a big gesture of a friendship that is not taken lightly. 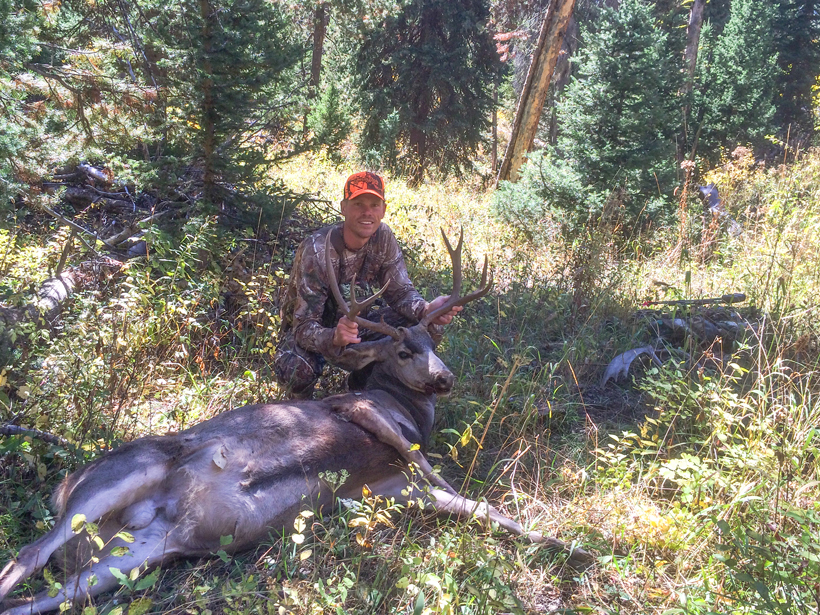 I missed some of the prime early archery hunting in Washington because I went hunting with my brother in the Wyoming backcountry. He was able to take this great buck on the hunt. 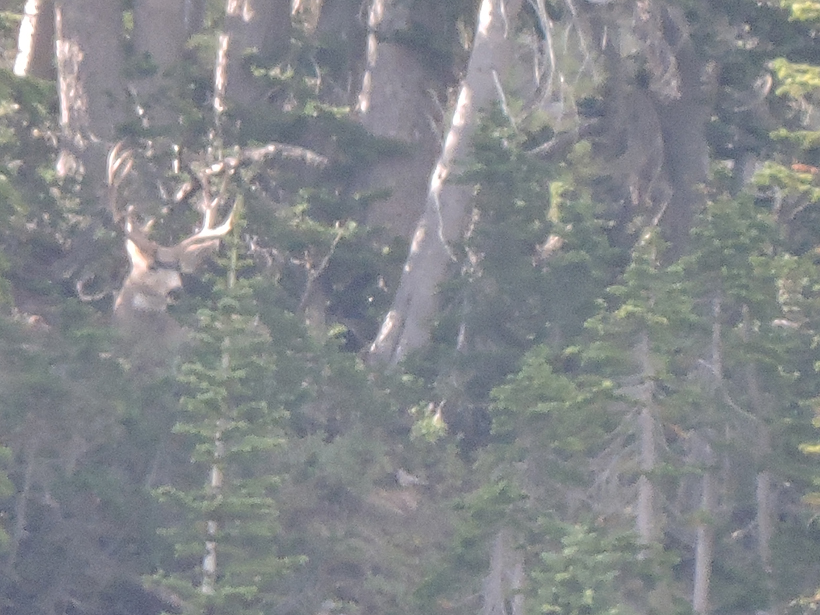 When I got back home, I had a few close calls with the bow and saw some pretty nice deer, but could never seal the deal. With the muzzleloader, I unsuccessfully attempted to find a nice mule deer that I saw earlier while bowhunting, but unfortunately work obligations did not allow me to hunt much more during the muzzleloader season. I was on-call for the weekend of the rifle opener, which meant I couldn't go anywhere outside of a 15-minute radius from the hospital. I was starting to think that I might have to wait another year to harvest my first deer.

After eight straight days, my first break from work came on Tuesday, October 14. I worked until about noon and couldn't wait to switch the call phone over and get up the mountain. My friend, Gary, asked me around that time if I wanted to head up the mountain with him and two of his kids for an afternoon hunt. Imagine my dismay when I got home and my wife was aching to make a 180-mile round trip Costco run. Reluctantly, I told Gary I would not be able to make it. I made some headway on the "honey-do" list and around 2:30 p.m., I think my wife could easily sense my misery because she decided the Costco run could wait. I immediately called Gary. They hadn't left yet! 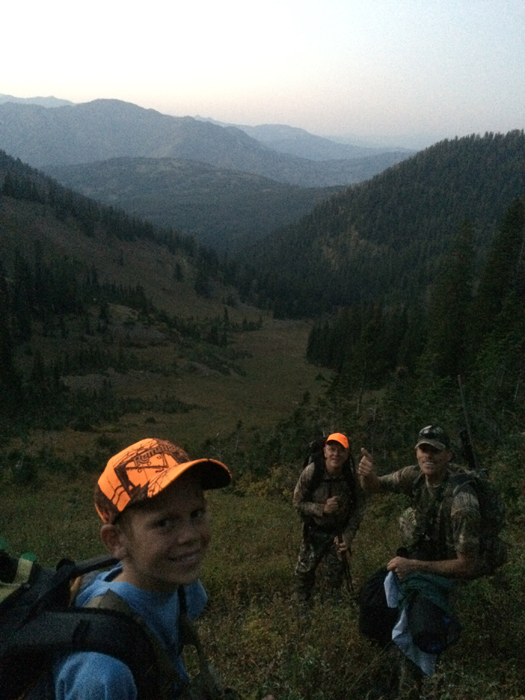 An hour later, we had gone from 900 to almost 6,000 feet in elevation. We were hiking up to a ridge that Gary was familiar with. 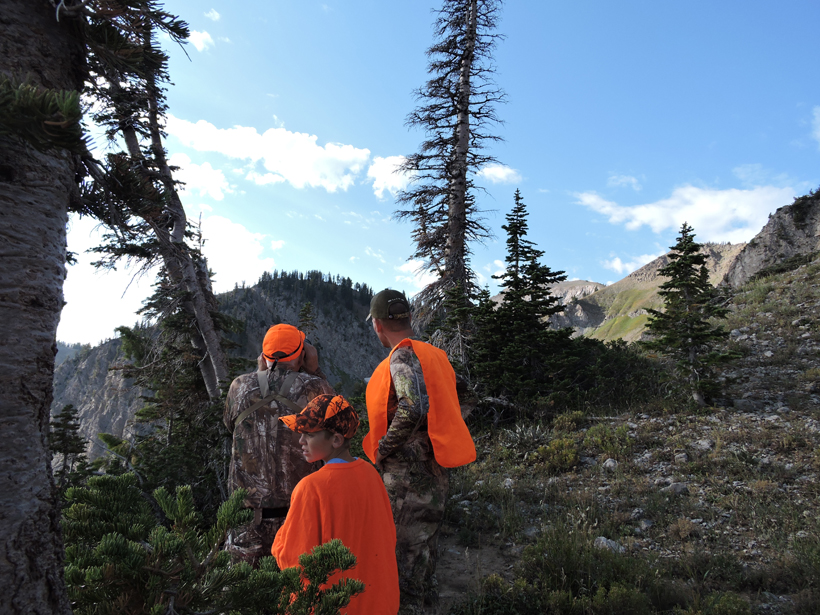 Approximately 200 yards from the top, Gary stopped and asked if we should split up. We agreed that if either of us heard a shot, we would turn on the radios. He gave me some landmarks to watch for to familiarize me to the rendezvous point and off we went. 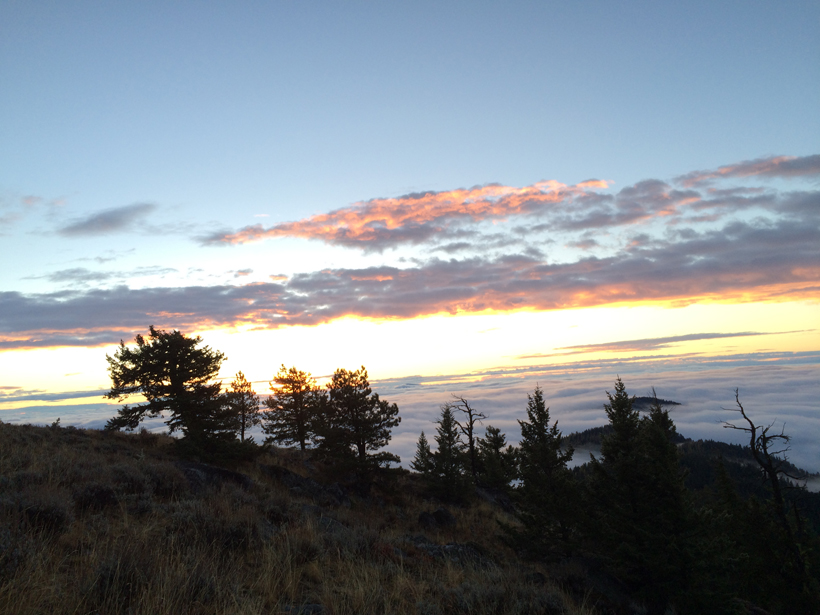 The wind was blowing about 15-20 mph. north to south, so I went deep into the timber hoping my scent would push something toward them. I was not too worried about being quiet because the wind was howling and I was trying to push the deer anyway, so I made pretty good time getting to the east point of the ridge. However, I got mixed up with the landmarks Gary had given me and ended up hiking down into a saddle that wasn't part of the plan.

I came upon a 15-foot ledge with a beautiful meadow about half the size of a football field beneath me. On the far edge of the meadow was a grove of jack pines. Hunting the high country in Wyoming taught me that big bucks love those jack pines, so I moved about 40 yards to my left to gain a better vantage point so I could glass the timber behind the jack pines. As I started to lift my Vortex Kaibabs to my eyes, I caught some movement coming from my left. His body was massive and I thought I saw four points on the right with nice forks. I went to range him, and realized I would not have time because he was moving to the edge of my only shooting lane. I pulled up my .25-06, put the crosshairs on his heart and pulled the trigger. I quickly lowered my gun to watch him run away and was suddenly overcome with excitement as I saw him take two steps and drop into the jack pines behind him! I turned on my radio and Gary was already asking if it was me that just shot. I tried to whisper back, but I was way too jacked! I finally took my first buck! 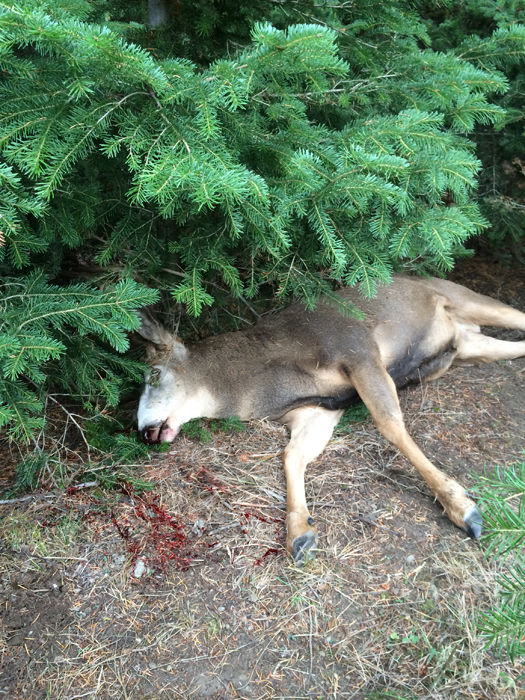 I waited about five minutes and slowly made my way down, all the while praying that he really was down where I saw him fall. I pulled him out of the pines and I could not believe my eyes! 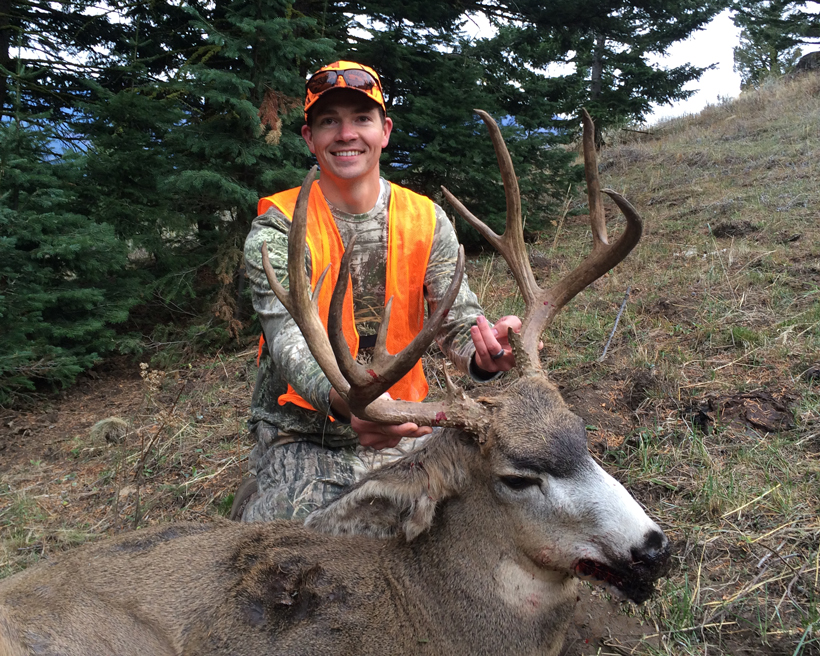 I was in awe! It was a moment of pure joy and an experience that I am beyond grateful to have had. 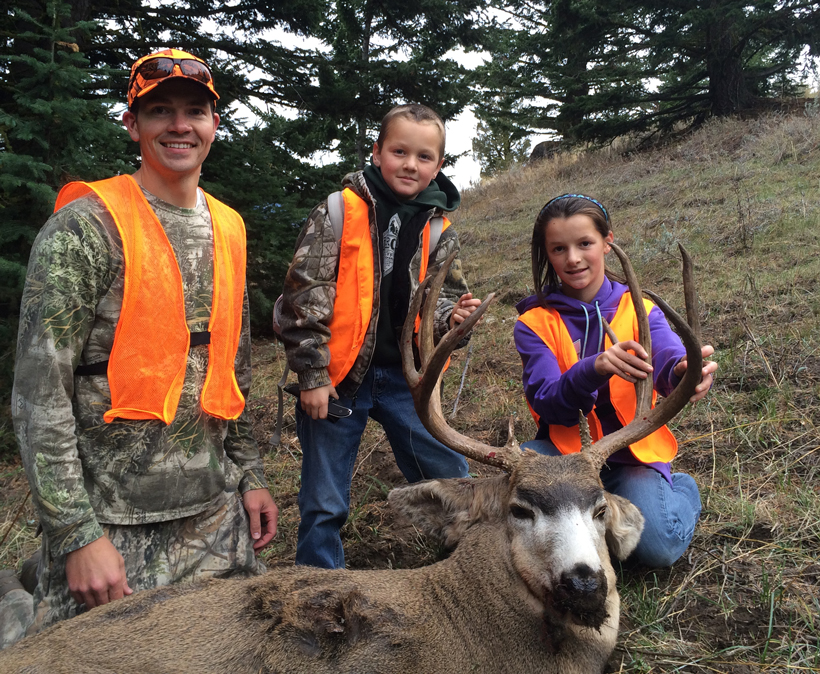 Gary, Afton, and Darton finally made it over to me, and I got to experience the excitement all over again as they laid their eyes on him. It is a tradition with the Wood family to name their bucks, so the kids asked me what I was going to name mine. The four-point crown on his right side made me think of a king, and since we were standing in the timbers, so I appropriately  named him the "Timber King." 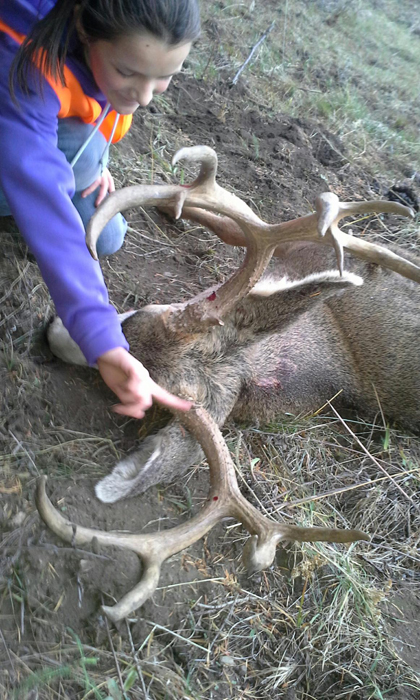 When I think about the timing of everything that happened in order for me to be on that ledge for those three seconds where this beautiful buck meandered through a meadow and across my shooting lane, I cannot help but smile! 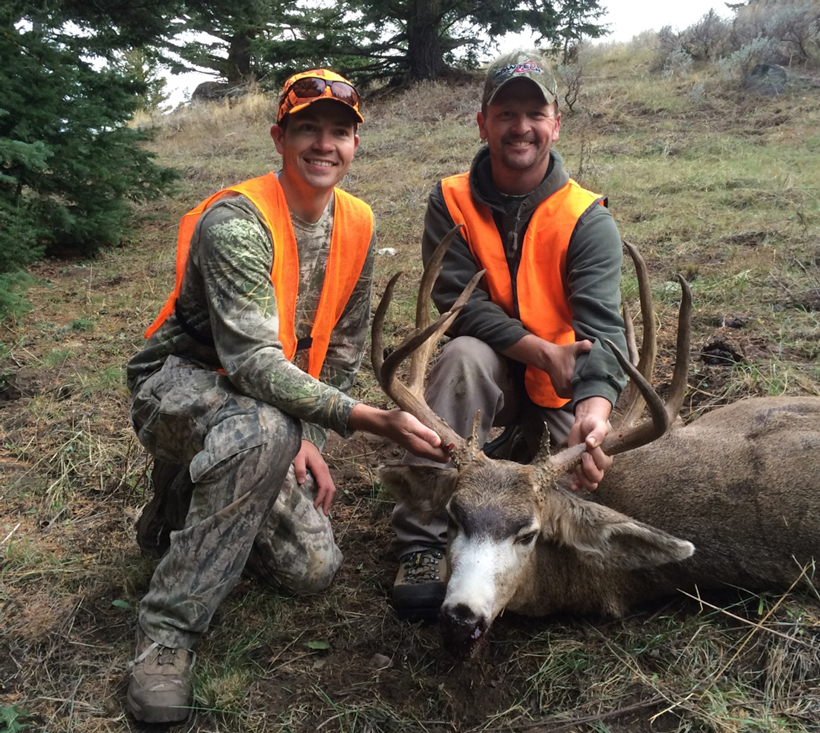 It goes to show that you never know what you might find when you get out in the mountains and hike around, even if you only have a few hours after work someday. 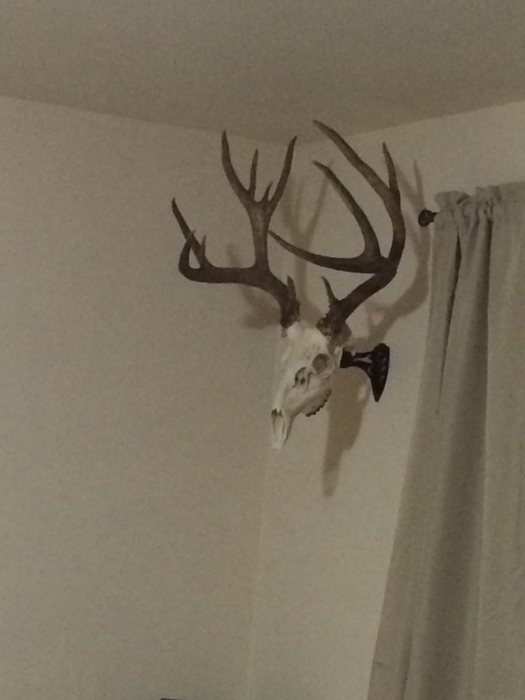 I'm looking forward to many more seasons of trying to top my first buck! 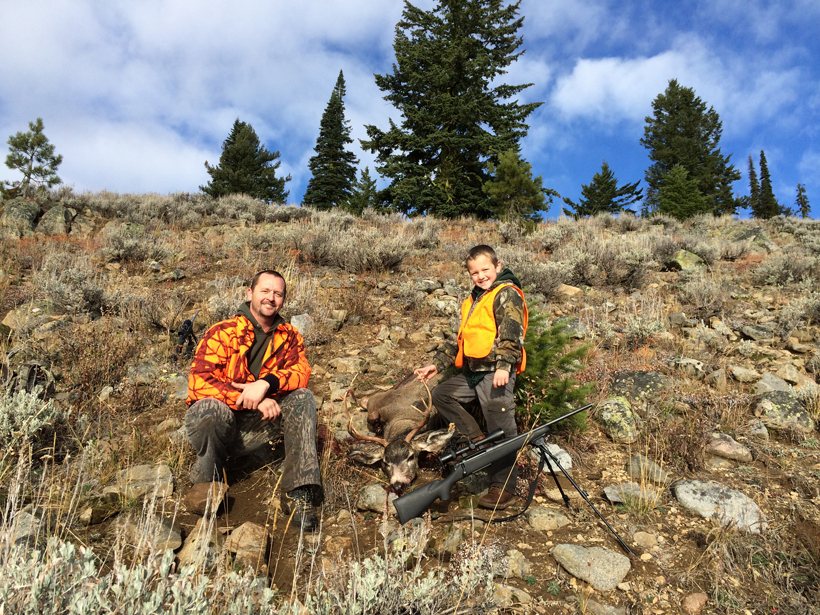 Four days later, I was able to witness Darton take his first deer that he shot not more than a few ridges away from Timber King's ridge with his son by his side. What an incredible experience that was!