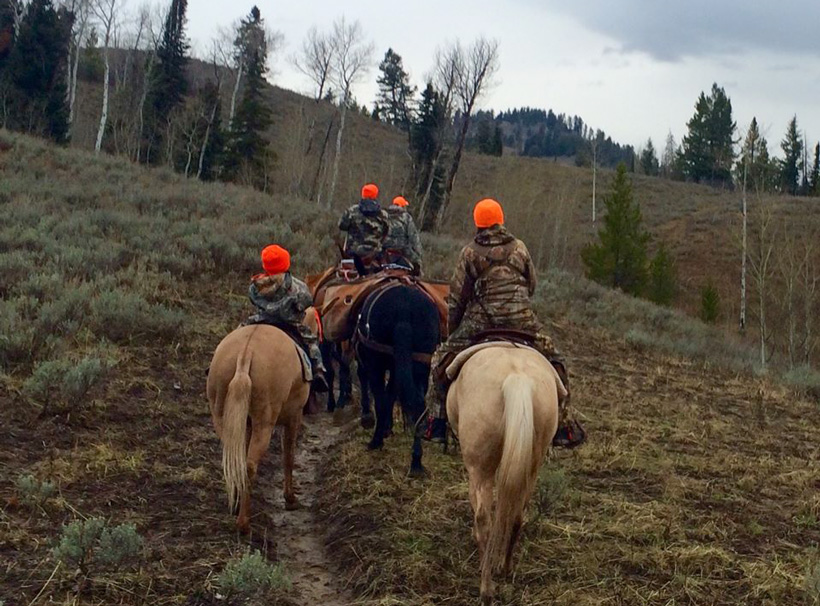 The text I had been waiting for finally came through. My brother-in-law, Taylor, asked if I wanted to join him on a moose hunt the next day. It was the last weekend of the Wyoming moose season and I had been chomping at the bit to help him with his hunt. Yet, our schedules hadn’t meshed out and he’d already put in many days with his friends. This would be day 18 of his moose hunt. I was more excited than you can imagine to join along.

My horse and I were both in good shape after a couple months of deer and elk hunting and I hoped to bring some good luck to Taylor. I started to lay out my gear for the next day and make a list so I didn’t forget anything. Ever since I forgot my helmet to an away football game in high school I have been a bit crazy about not forgetting anything important. Kayden, our just turned eight-year-old, was watching me and I could tell his wheels were turning. He had the day off of school and I knew he wasn’t looking forward to going to the babysitter since we usually hang out together on Fridays and do fun things. After a bit, he looked at me and asked if he could come hunting with me. Wow, I really wanted to say yes, but I knew we would be riding into steep country for a couple of hours before daylight and I didn’t want to be a burden to Taylor’s hunt – it was the last weekend.

I didn’t respond as I was trying to figure out what to say that wouldn’t make him feel bad. He continued, “I am ready.” Pause. “I can ride a horse, I can hike, I won’t complain.”

Wow, pretty wise for a little guy knowing my own thoughts. We had already ventured to places most grownups don’t go for years, so I couldn’t really argue. I wanted to say yes, but said, “Let me check with Mom.” Tylee didn’t hesitate, and said, “Yes, that would be awesome.”

“Oh boy,” I said. “Call your mom (Grandma Cinta) and get her thoughts.” Cinta kind of runs the family and I knew she would consider all involved in her response. I really didn’t want to overstep my invite on the moose hunt, but she had the same response, “That would be great!” Really, is this family for real? I asked Tylee to call Taylor as Kayden listened intently and began to make his own list. 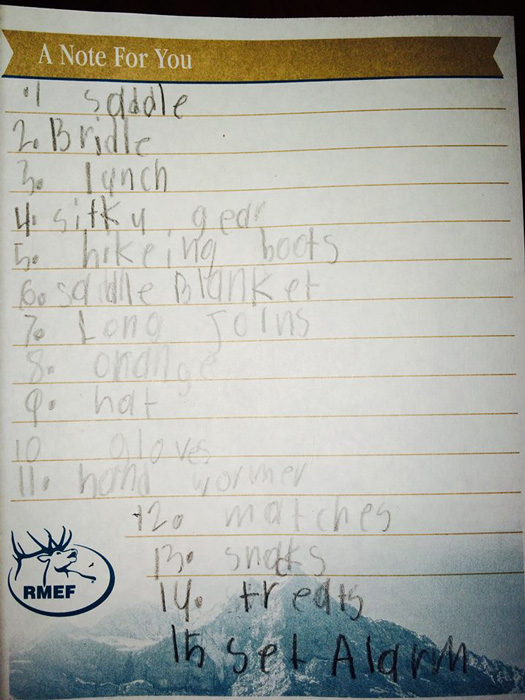 Kayden and I could both hear Taylor’s response when Tylee called her brother. I was a bit worried and didn’t want Kayden’s feeling hurt by hearing what Taylor would say.

“Hell yeah, that would be awesome!”

In reality, I’m not even sure I would have been that cool... (brought some tears to my eyes actually). Not sure who was more excited—me or Kayden! We got his list together and got him to bed quickly as 3:30 a.m. was going to come pretty fast. Kayden was as proud as could be and I was too. After I had checked our lists several times, made sure the truck had fuel, got some good treats readied, and enjoyed a Pendleton on ice, I was ready for bed, too. I’m pretty sure that I didn’t sleep. Some days are made to be remembered. I had that feeling.

Kayden jumped out of bed like a cat sprayed with water. I think he set the record getting ready and we were off once the coffee was made. We grabbed some maple sticks with bacon at the gas station and headed out to catch the horses. We were early. It was 4 a.m. and we were ready!

Catching and saddling the horses was a breeze. Kayden listened to stories told as we drove up the canyon to our chosen hunting location. Taylor had seen a decent bull in the area the weekend before and we thought others were probably in the area given the rut was in full swing. 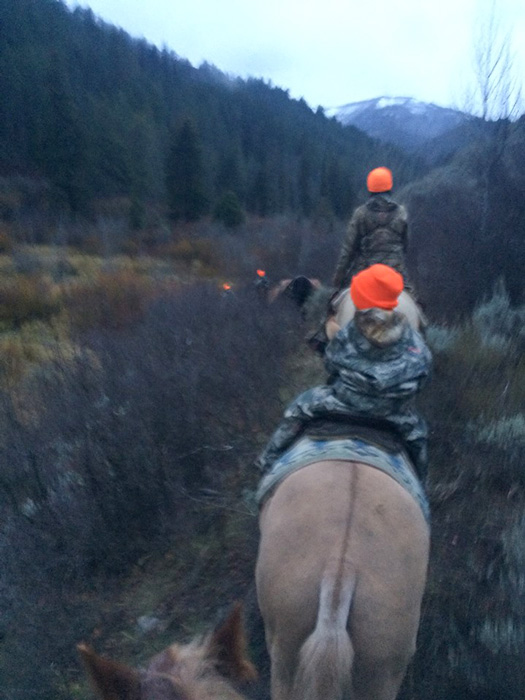 Per usual, Whompa took the lead, then Taylor and our favored pack horses, Cinta, Kaydan, and me bringing up the rear. The trail was wet and boggy and it had the feel of a good day to come as we followed Whompa’s headlight up the creek bottom. The weather report had said rain, but it was holding and just a bit foggy. Kayden was on old “Hondo.” I didn’t worry about Kayden as Hondo is as sure footed and calm as they come. The trail steepened, but Kayden just bobbed along, his feet still not reaching the stirrups. 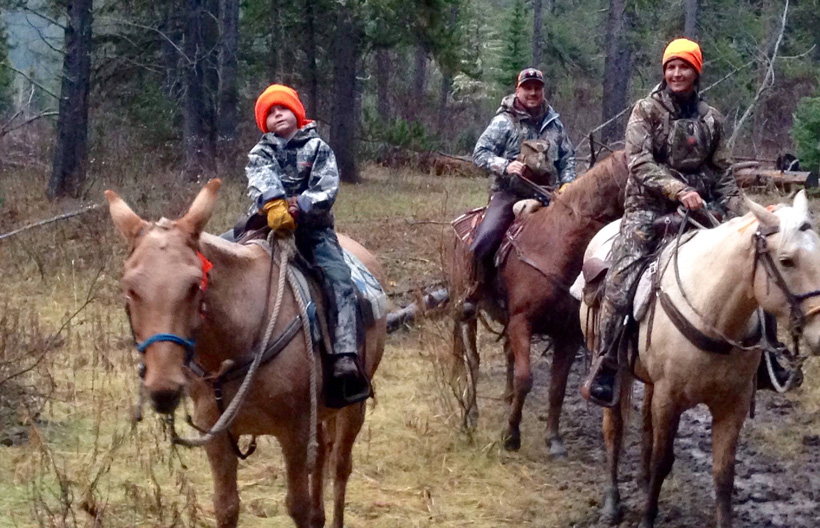 Hondo is a great mule (babysitter).

Just as dawn came to the glorious bowl we were riding through, Whompa spotted the first moose of the day. We calmly rode to a good vantage point and tied up the horses. I could barely contain the excitement; pretty sure Kayden was about ready to jump out of his pants! Confirmed bull; the hunt was on! We snuck through the trees and found a good place to glass. Whompa may only have one arm, but his spotter was set up before the rest of us were in position. 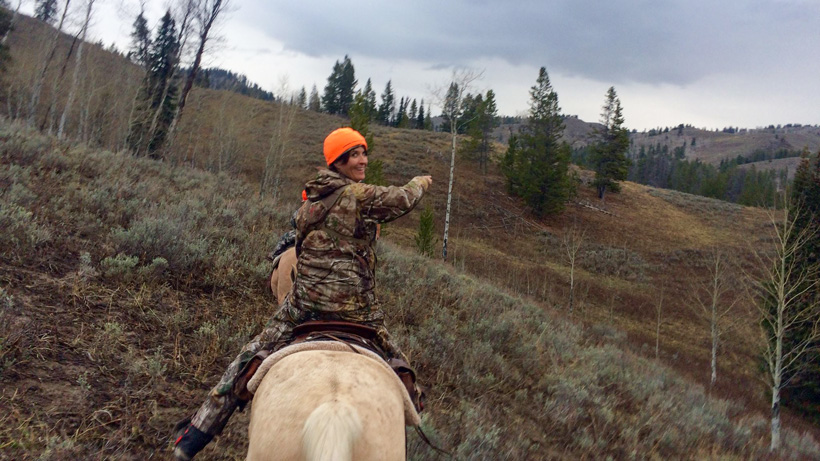 Taylor wasn’t sure what to do. It was a smaller bull, but it was the last weekend and he had the entourage to consider. He made the right decision. We re-saddled and rode on. We probably rode about half of a mile before I spotted a moose working through the trees a ways off. I saw a glimpse and it was gone. I couldn’t get Taylor’s attention, so I had to kick and whip old Rhondo to catch up. Now I am not yet a cowboy so the rodeo was on to catch Taylor and let him know about the moose. I would be lying if I wasn’t laughing at myself within as Rhondo and I galloped up across the sagebrush. Once we wheeled around and calmed the pack horses that I had running, we quickly caught another glimpse. Antlers confirmed that there was two! We got Whompa’s attention and followed Whompa down a little ravine and stopped in a perfect patch of aspen. The air was filled with excitement. I was the only one that had spotted the antlers and I thought it was a decent bull. Then again, I am known to get more than a bit excited. 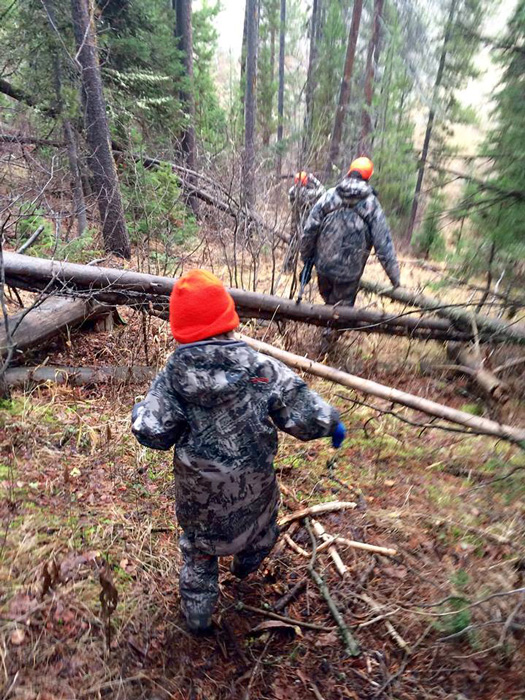 Kayden doing a great job of keeping up with the group. 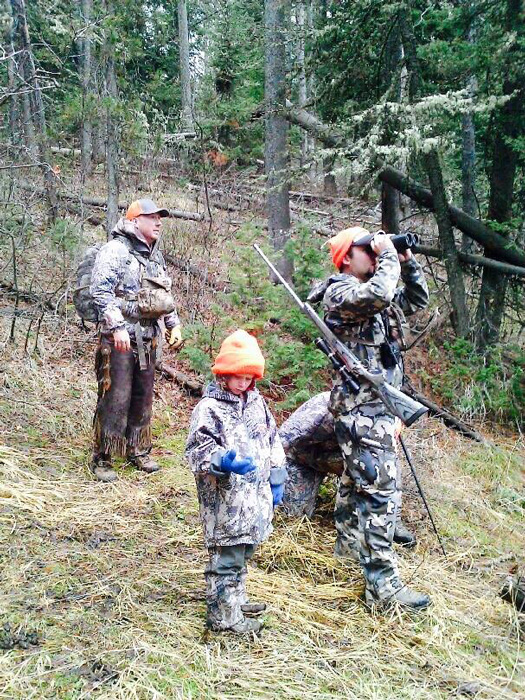 Trying to decide if we should go after the bull. It’s the last weekend after all.

Horses secured, we followed behind Taylor has he climbed to a good vantage point to hopefully get a shot. Kayden was on Taylor’s heals the whole way up the hill. Did it get any better than this? Cinta stayed behind and made sure all the horses were OK and eased up behind us. 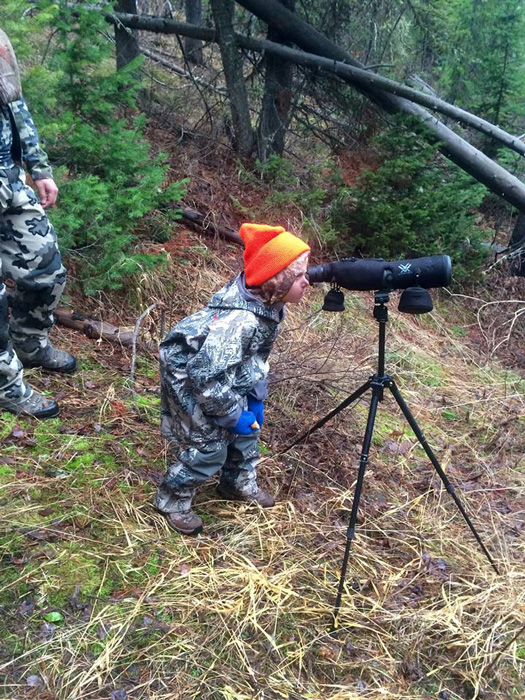 There they were! Two glorious bulls. One looked damn good from our angle. I counted at least 8 points. Taylor quickly threw down his pack and Whompa was on the rangefinder. Ol’ Whompa kept up with us young bucks. He had committed himself to get in shape and he did. I was proud of him. He ranged the moose at 458 yards. Taylor quickly steadied his rest and squeezed off a round. His gun was a gift from his Grandpa Frank and he was confident with his hold over.

We knew it was a good hit from the sound, but the moose still walked off into the trees. Taylor quickly went down and up to get into position for another shot. Kayden was still right on his uncle’s heels and this was big country. Tough little shit. I went high to get a better look. I saw the bull on its knees trying to get up and signaled to Taylor and Kayden to get going. I knew he was hit good, but moose are big animals and I didn’t want him getting away into the timber. As I watched, little Kayden was pushing his uncle to go faster. Atta kid! By now, the bull was up and started to walk toward them. Oh boy! It looked from my vantage point like we might have a nose-to-nose encounter, but then I lost sight of the moose.

Taylor and Kayden crested the plateau then hastily went into the trees. I didn’t know what was going on and hoped I didn’t cause them to spook the moose by making them push forward so fast. Moments seemed like hours. Then a shot echoed through the canyons and we knew that they had found the majestic bull. 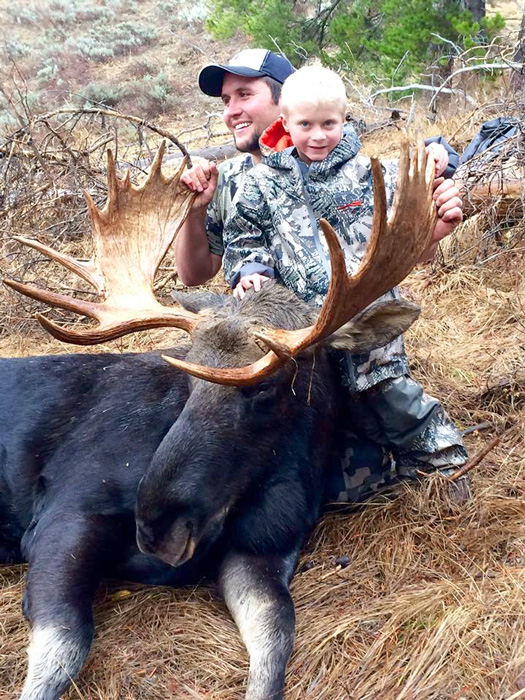 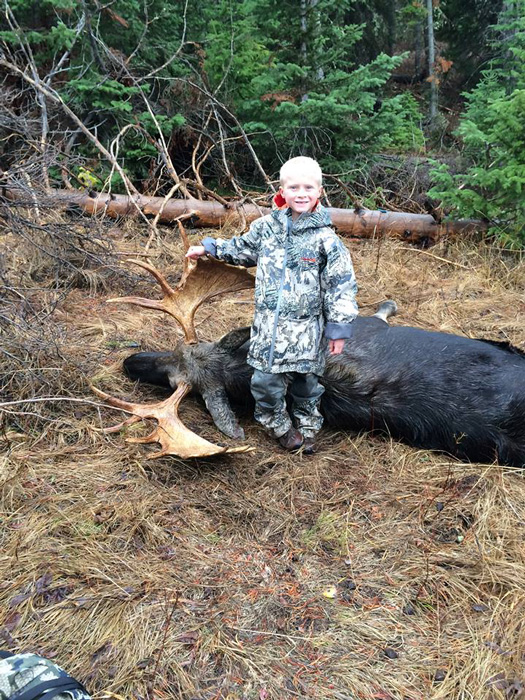 Whompa and I quickly made our way to the scene. As I topped the crest and came into view I whooped in excitement as I saw the magnificent bull lying next to Kayden and Taylor. Wow. Just wow! 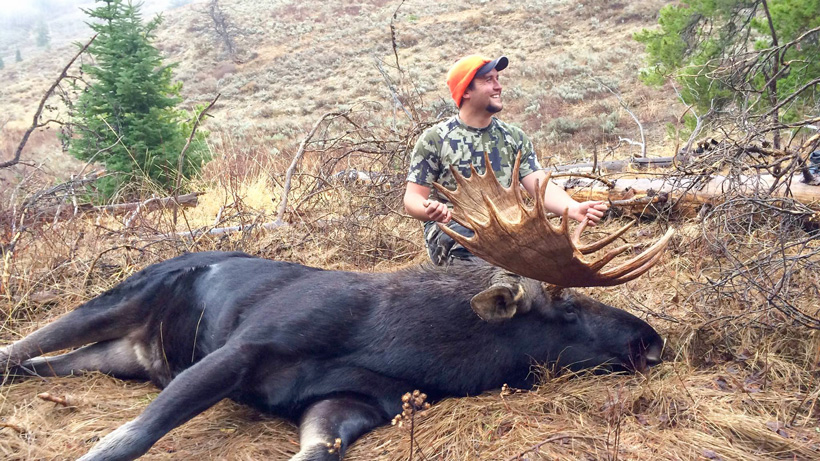 Kayden came running toward me with an excitement electrifying him like I have never seen. “Grant, I found him for Uncle Taylor!” What? Oh man. What a day! Kayden couldn’t wait to tell everyone. As they had walked through the trees together, Kayden at Uncle Taylor’s heels, they managed to walk past the wounded bull. Kayden turned and spotted the bull and the rest is history. Black and white text can’t do justice to the little guy’s excitement. I was so happy that everything came together for Taylor. It was hunting karma at its best. Good fortune to a good man! Kayden couldn’t have a better role model. Love you Taylor. 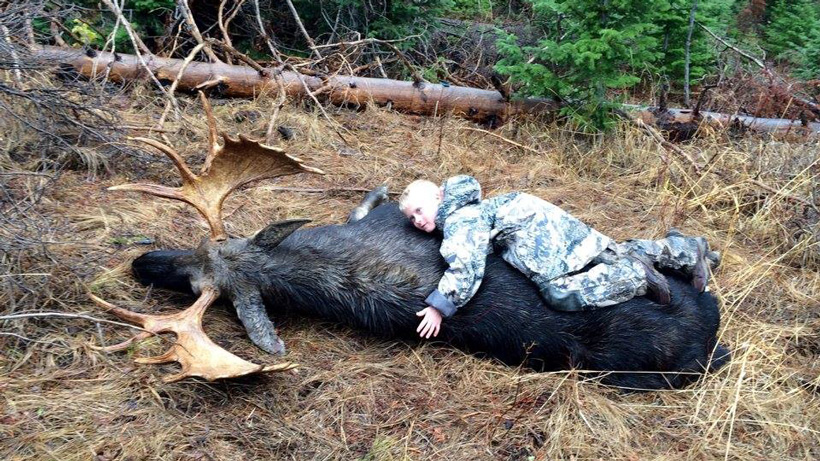 The family gathered and we enjoyed every little moment of butchering the moose and packing it out. Stories were told, laughs shared, and a few hand cramps survived. 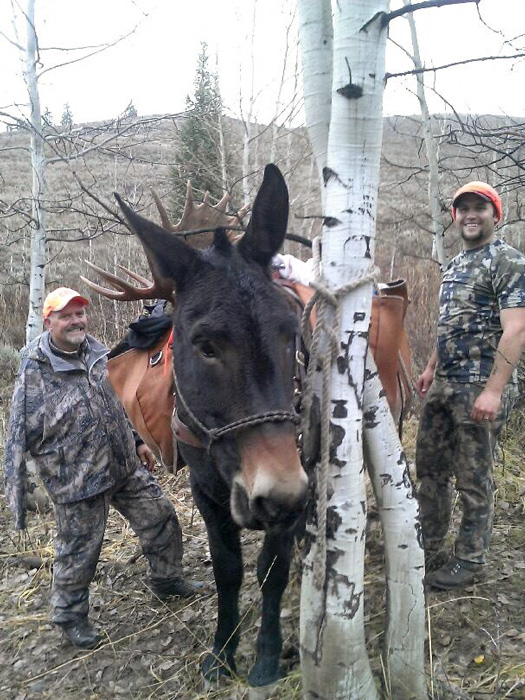 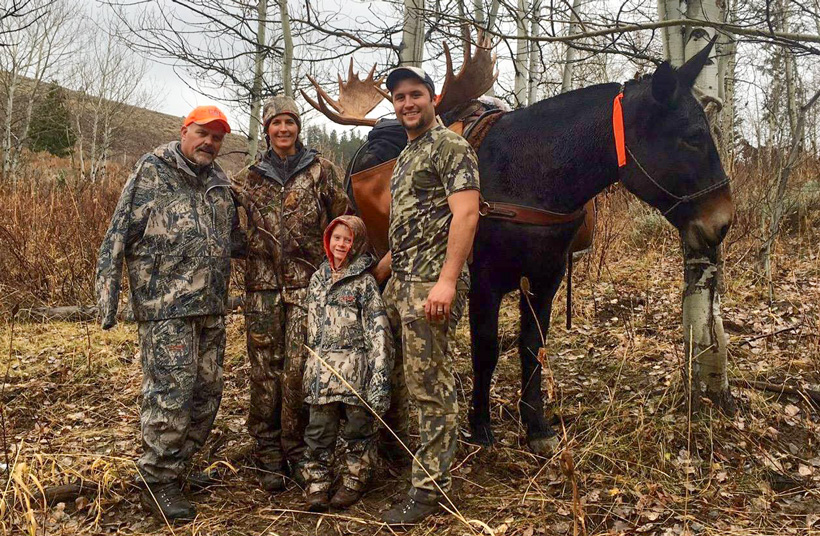 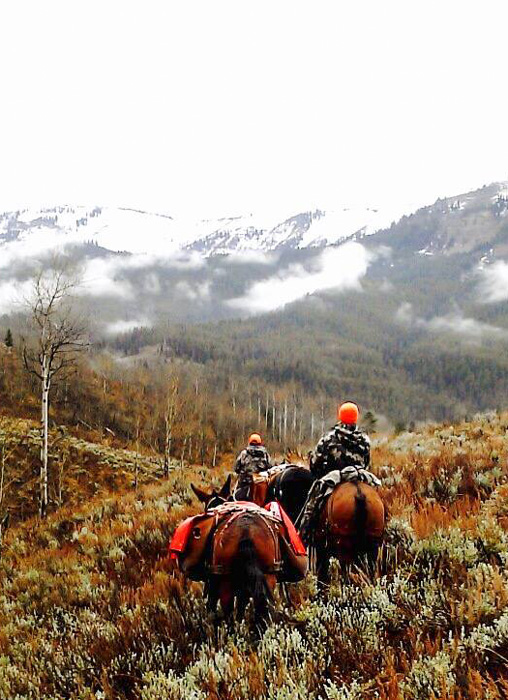 Kayden hummed Yankee Doodle the entire ride out. I smiled as he rode behind and enjoyed the moment. It was truly a day to remember!