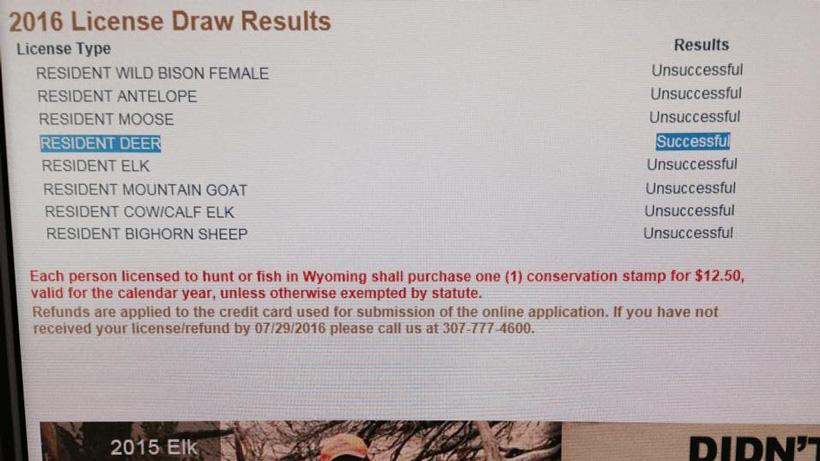 During application season, it felt like I was being pummeled by unsuccessful notices from all of the western states. Anyone who applies in multiple western states understands that feeling. Fortunately, I always have a pretty good general season hunting in Wyoming. I had all but conceded to the fact that my 2016 hunting season would consist of hunting general deer and elk in my home state. Wyoming is one of the last states to post results and, finally, in late June, the draw results were posted. I was shocked to find out that my wife and I had both drawn our first choice deer hunt. The hunt we drew had <3% resident draw odds and has the reputation of being great with some cold snowy weather. The hunt area was also known to be horrible if the weather is hot and dry.

Although I was excited about drawing the permit, I was actually a little bummed that I wouldn’t be hunting the general season. I think I have as much fun scouting and prepping for general hunts as I do actually hunting. The summer dragged on because the hunt area I drew didn’t require scouting as most of the deer migrate into the area and aren’t resident deer. We did spend a couple days in the hunt area in the early fall, learning roads, identifying potential glassing points and familiarizing ourselves with areas that were shared by hunters who previously had the tag.

The general rule of thumb with Wyoming deer hunts that occur Oct. 15 to 31 is that you are better off focusing on the latter part of the season. Yet, for some reason I found myself there on opening day. We discovered that the deer were already moving into the area—probably accelerated by the deep early snow we received in early October. We saw a lot of does and small bucks during the first couple of days. On Oct. 17, we received 8” of snow. The snow drove the migration into lightspeed. The amount of deer in the hunt area seemed to double by the day. About five days into the season we were seeing 30 to 60 bucks and 500 to 600 does per day. The problem was that the bucks were all too young and, while some of them had impressive antlers, our goal was to harvest older age class mule deer.

On day nine, we finally glassed up a really nice 175” buck. My wife had limited hunting time left and this was the first trophy deer we had laid our eyes on. She spent about five minutes studying it through the scope and told me she was going to pass. I pleaded with her and told her that this would be her biggest deer ever and she responded, “Yes, and it would also be my smallest,” as she reminded me that she had never killed a mule deer. To top it off, it was her last night that we knew she could hunt for a week or so. I conceded to the fact that she wasn’t going to kill this beautiful buck and admired her persistence.

The next day was overcast with some rain, but, by 10 a.m., I had glassed up three older age class bucks, including a beautiful 4x3 that took all of my willpower to stay off the trigger. The hunting gods had flipped the old age class switch. I watched over 60 deer move into my hunt area that morning. At 1 p.m., I was hiking out of a vantage point and took five minutes to set up my tripod-mounted binoculars to glass some big flats in the direction I had come from. Immediately, I spotted the first buck of the hunt that required no additional scrutiny. I put my spotting scope on him and my jaw hit the ground. Immediately, I started figuring out a plan. From where I spotted the deer I had a little wash and some rocks that I knew would allow me to close the distance through very open ground for a reasonable shot. Quickly, I covered the distance and peered over a large boulder. I spotted the buck bedded at 523 yards. There was a pile of rocks 130 yards closer and I figured I could get to the next rock pile for a more reasonable shot. About halfway between the two positions I spooked two does that were bedded behind the rock pile I was trying to sneak up to. They blew out and the buck jumped out of his bed. He looked like he was going to flee, but instead of running, he froze.

I was on my knees and struggled to get a rest, but the sagebrush was high and a shot with a stable rest was impossible. He started walking away from me. At first, he was walking stiff legged; he knew something wasn’t right, but he couldn’t identify the threat. I let him get about 800 yards away, slipped back into the wash and started following him. I followed him for about a mile and, eventually, he slowed and started feeding on a small ridge.

Quickly and quietly, I closed the distance to 411 yards before running out of cover. I hurriedly set my rifle up for the shot and got ready to shoot. My heart was beating out of my chest and I thought I better take a moment and collect myself. I decided to set up my spotting scope on a tripod and shot some video of this awesome deer feeding just 400 yards from me. I left my camera rolling and refocused on what I had to do. After a few more deep breaths, I settled behind the scope, squeezed the trigger until my gun barked and the shot was on the way.

The deer jumped about 6’ in the air, took two steps forward and stumbled to the ground. I had made a perfect shot through both front shoulders. 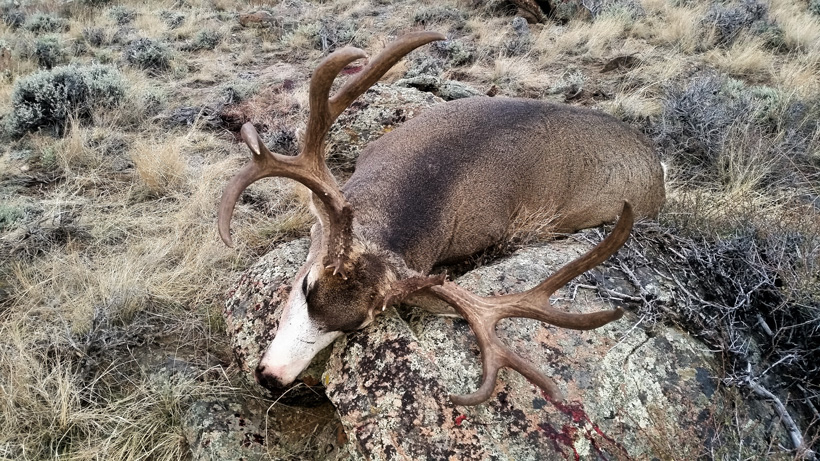 As I walked up on the deer, every 20 yards or so I stopped to admire the giant antlers sticking out of the tall sage. Every time I stopped he seemed to get bigger. 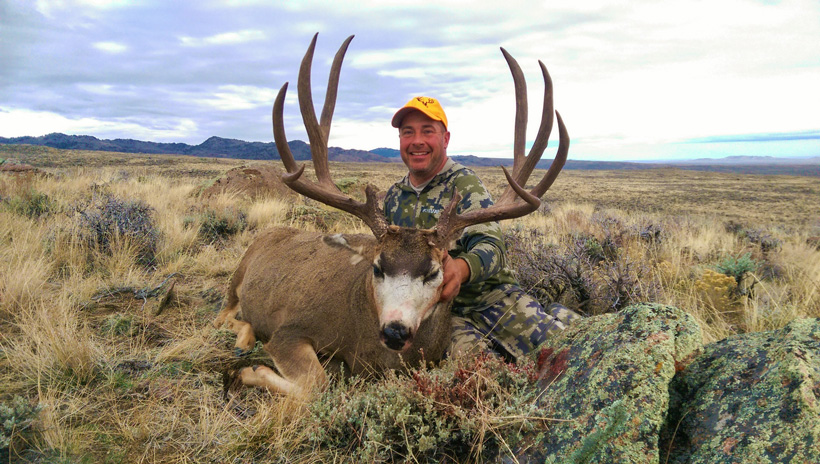 After the longest walk of my life I was standing over this beautiful buck and was beside myself. The awesome buck was the biggest typical I had ever harvested. 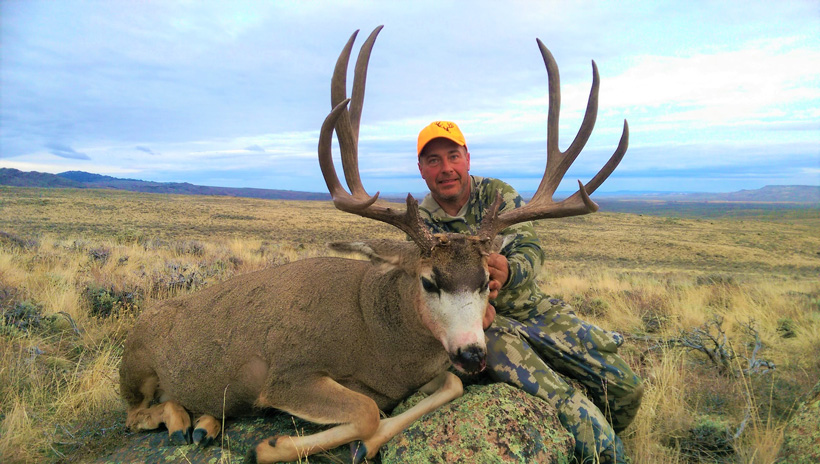 I hiked to my truck and ran into some other hunters that helped me take pictures and care for this awesome deer. What great guys and at the end of the hunt I got to help participate in their hunts, as one of those hunters took a 36” giant.

The next day, I got my buck taken care of and my wife informed me that her boss, who is an avid hunter, told her to take the rest of the week off and get up there to get her deer. Morning found us glassing a huge chunk of real estate with no mature bucks present. We had some friends also looking for my wife in another area in the unit. My friend called me and told me that he had spotted a nice mature 6x4 that he thought was in the mid 170s. I told her that our friend was generally very conservative on score and we needed to go look at the buck.

We met up with him, but the deer had walked behind a little hill and was out of sight. We approached where we should have been able to see the buck and started glassing. We glassed the small hillside for about five minutes where the deer had last been seen and were about ready to move to a different vantage when my wife excitedly let me know she had spotted the buck. He was bedded and almost invisible. He was holding tight and, until she pointed him out to me, I couldn’t find him in my spotter. She looked through the spotter and excitedly told me that was she wanted to harvest the buck. The buck was in range and we quickly got her set up on a solid rest. I videoed the deer as we waited for him to stand up. Soon, the buck stood up and she was ready. 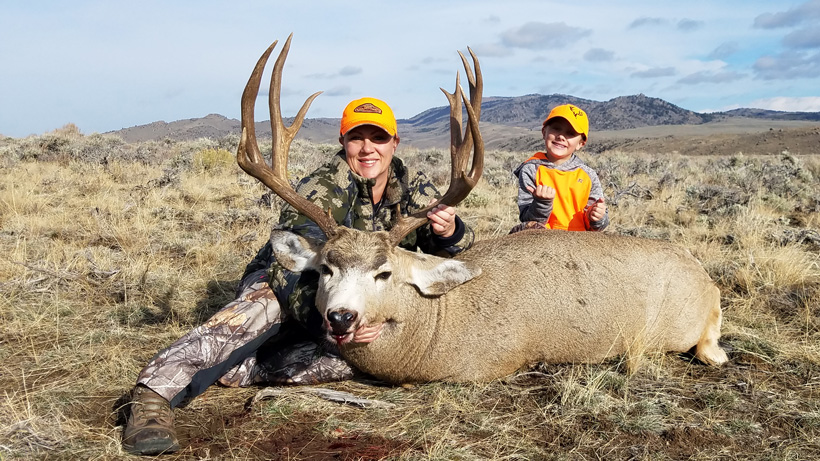 The shot was perfect and our second tag was filled. Once again, as we approached the deer, it kept getting bigger. The buck was very heavy and it became readily apparent that we had all underestimated the size of this deer. My wife’s deer ended up grossing over 190”. 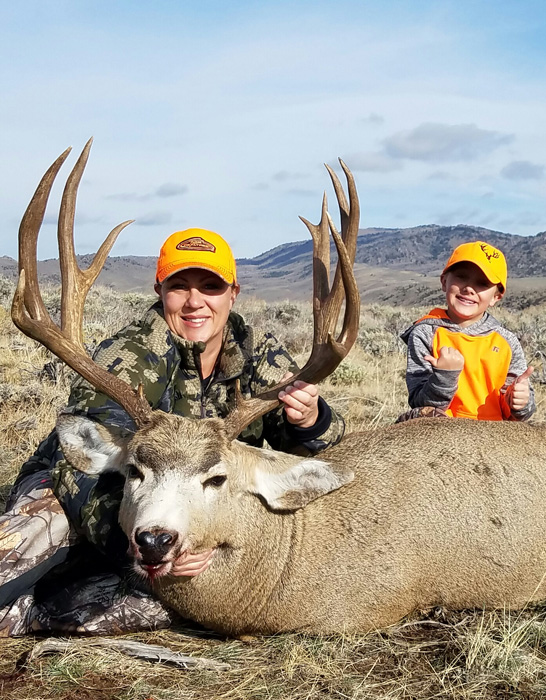 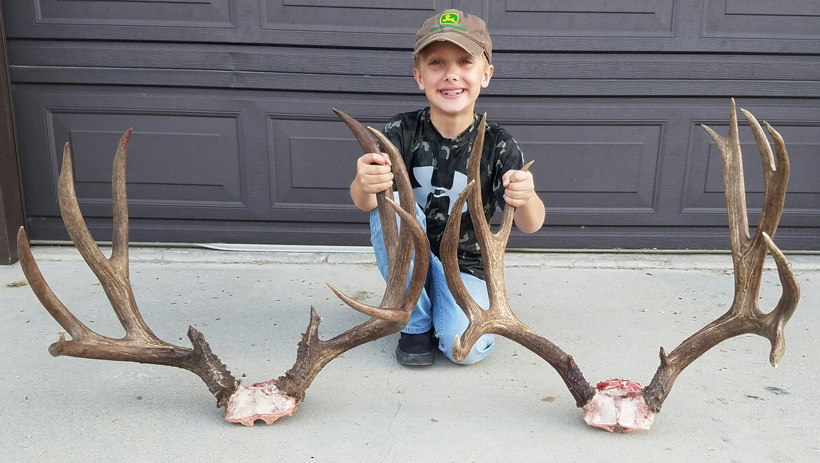 Our seven-year-old son got to watch his mom seal the deal. He hunted with us during the whole hunt. Besides harvesting two great deer and filling the freezer with some awesome meat we also solidified his passion for the outdoors, which is as important to me as killing the deer.

Like I said earlier, Wyoming’s migration hunts can be a super tough proposition. A hunter cashing in a decade of bonus points may hit it on a year with an Indian summer and leave with an unfilled tag and a lot of wishing for a redo. Hunting pressure at times can borderline on ridiculous. These factors can make migration hunts as mentally demanding as any hunt in the West. But, if you are lucky, you may be gifted the tag on a year like 2016 when the hunt could only be summed up as the “perfect storm.”