The cherry on top, a Montana hunt to remember

Well, here we go again. What started out to be an evening mule deer scouting trip on some new ground turned out to be a whole lot more than that. After being successful on my first bull elk earlier that morning, we returned to the lodge for a warm meal and a well-deserved nap after sleeping in the truck the night before. My father-in-law, Harold Davis, who was with me on this trip, decided that a nap was crucial to the remainder of the week. However, I was still pumped full of adrenaline, so our guide, Mike, and I decided to head out to a new ranch in search of mule deer, hoping to find a shooter, but also just to spend some more time outdoors in Montana. I figured I could sleep when I got home. 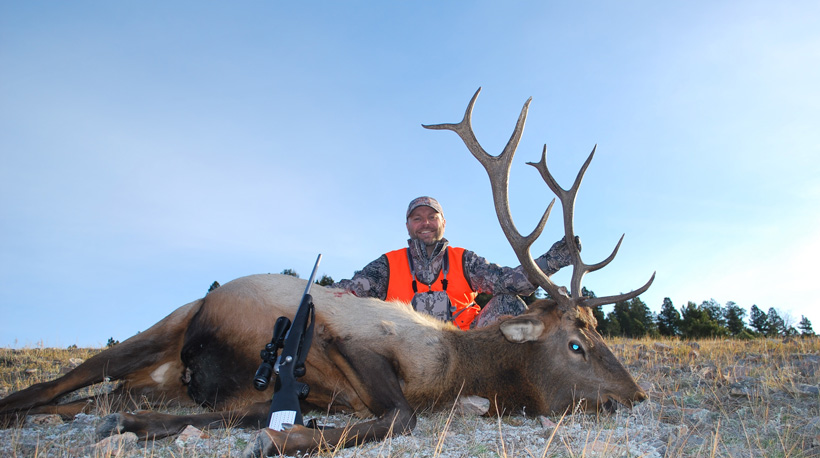 Mike and I started out on some property that they have leased from a Hutterite colony. As we made our way through a couple of gates and up on the mountain, we saw Roy and his hunters coming up toward us. They had spotted a couple of mule deer bucks while they were elk hunting and wanted to let us know about them. They had already tagged out on mule deer so the bucks were safe with them. We decided to take advantage of this information and headed back over that way. I tried calling Harold on our way with no luck. He must have been in some deep beauty sleep.

Mike said that if we were going to get on the bucks we needed to get there as quickly as possible. So we drove back to the ranch where I had killed my bull earlier that morning. We ended up spotting the bucks as they made their way around a canyon. Within in minutes of us arriving there, they decided to bed. This was actually the best-case scenario for us because it gave us plenty of time to glass the area and come up with a plan for a stalk.

As we left the truck, I couldn’t help but smile. Even if this didn’t work out, what are the chances of killing my first bull elk and mule deer on the same day? Either way, just being able to see a mule deer buck and to be able to formulate a plan to stalk within shooting distance was awesome. Mike picked out a route that would lead us to within about 150 yards of the bedded deer if everything worked out. There are a couple of big sagebrush bushes that we need to get to if we were going to have a chance. We made our way down the hill several hundred yards and side-hilled around about 200 more. We then started our ascent up to the top of a point that, once there, we would be within 200 yards of the bucks.

We got to the top and could see the sagebrush that we had picked out. It was about 30 yards away. I dropped my pack and shooting sticks because we would be crawling the remaining distance. Mike was in the lead and I was right on his tail. We were being extremely careful. Maneuvering from one small sage bush to another was painstakingly slow. We finally got to where Mike could see the bedded deer. He motioned for me to move up beside of him. I crawled up to his side and he asked if I could see them. I could not. So I eased on up ever so slowly. I finally spotted a bedded buck.

As I looked through the scope, I was a little disappointed. This buck wasn’t as big as I thought. I said, “I see him but he isn’t very big.”

Mike said look about 15 yards to the left of that deer.”

I panned my scope around and boom: there he was. This was the deer that I was planning on seeing. Now for veteran mule deer hunters, this was probably the kind of deer that most would pass, but for my first time mule deer hunting, there was no way I would pass on a deer like this. This was the kind of deer that was beyond my expectations of what I was looking for on this trip and there he was in my crosshairs.

I was still just a touch lower than I wanted to be to take a shot so I eased forward a couple more feet until the pack was at just the right height. I got settled in and double-checked the yardage—148—and let the crosshairs settle on the bedded buck’s shoulder. Mike had already given me the green light to shoot when I was ready and this was it.

With one smooth squeeze of the accutrigger, I had taken my first mule deer. The bullet had found its mark and the bedded buck never knew what happened. The other smaller buck jumped up and bounced around the hill about 25 yards and stopped not sure himself what had just occurred. It seemed like I was making a habit out of hugging and high fiving Mike today. 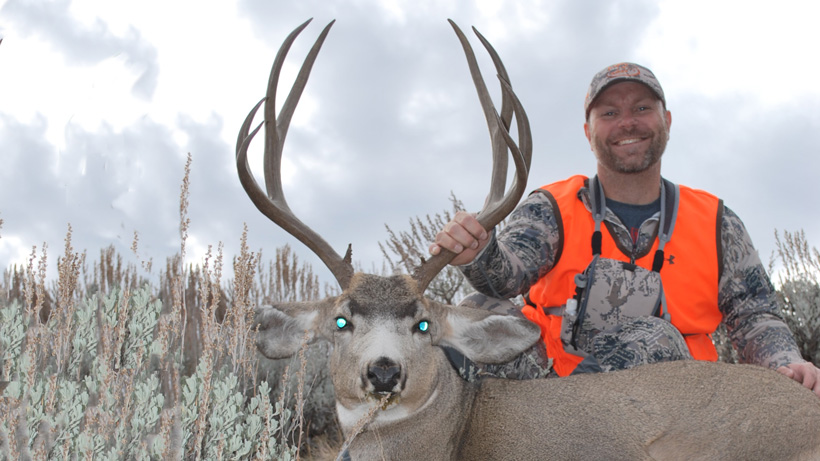 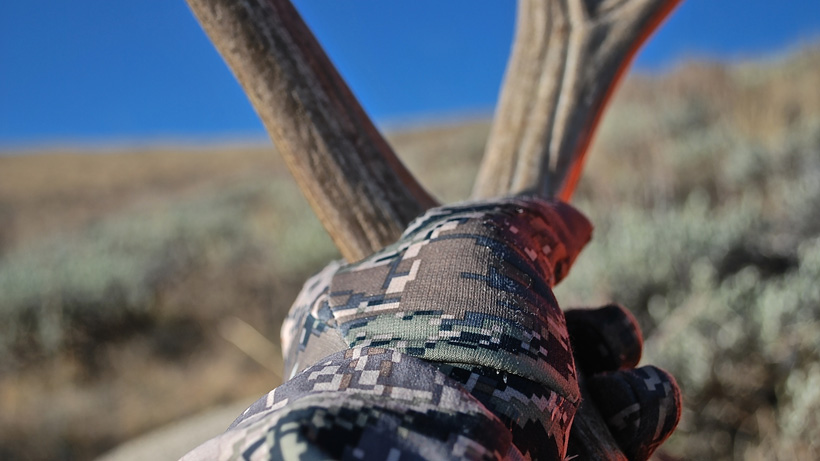 We made our way down and back up to the other side of the canyon where the buck was laying. We got on the same level as him and eased around the hillside to where he was. Wow! I was in total disbelief. There was no ground shrinkage to this buck. He was heavy and high. A solid 4x4 with eyegaurds. I had hopes of tagging out on a bull elk and a mule deer, but I surely didn’t think it would happen on the same day and with two great animals.

Again, Mike made the long trek back to the truck as I decided to sit here with my trophy and just reflect on what had happened that day. The Lord had blessed me with two great animals. Even without the kills, just to spend a day out here doing this is blessing enough. There have been days upon days where I have pictured myself in a place like this, doing something like this and now it was finally a reality. We loaded my buck up in the truck and headed back to town. After a stop at the lodge to show the buck off a bit, we made our second trip to the butcher shop that day followed by a call to my taxidermist.