Starting the year off right with the perfect father/son hunt 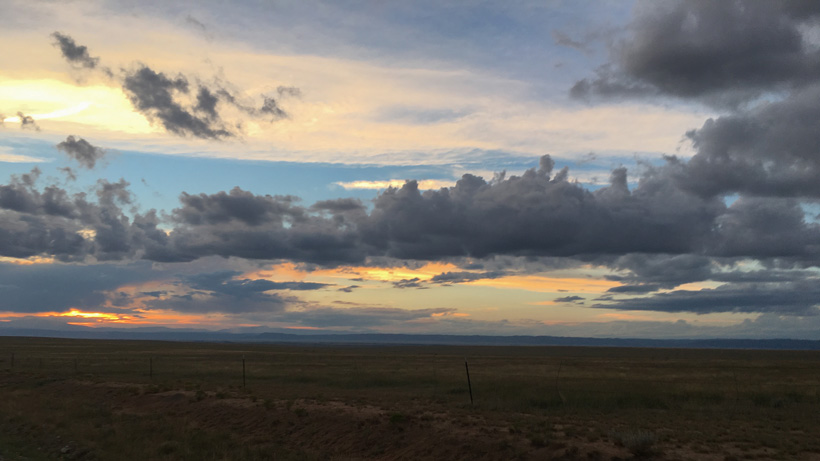 My adventure began earlier this year during the application period for the western states. As a self-taught, relatively new hunter from Long Beach, CA, I’ve only been hunting for the last three to four years and can speak from personal experience: this process can be a little intimidating. But through the Jay Scott Outdoors Podcast I learned about goHUNT’s INSIDER program and I joined early in the year so I could start preparing for the upcoming seasons. I was like a little boy with a new toy, geeking out on all the new information available to me on INSIDER. 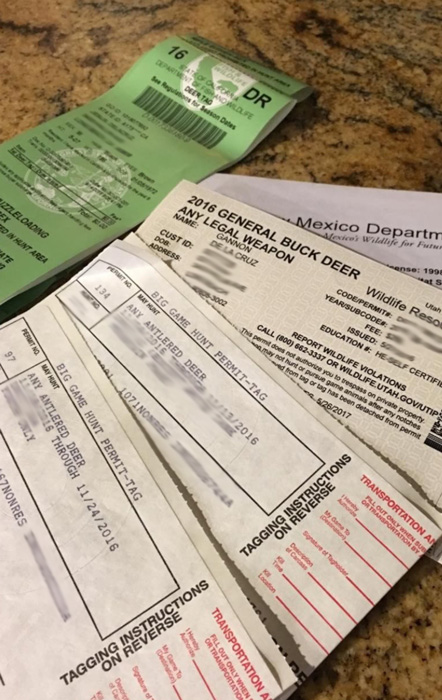 I got sticker shock after seeing how expensive the application process was going to be. After discussing it with my understanding wife, I started applying everywhere and the tags started rolling in. 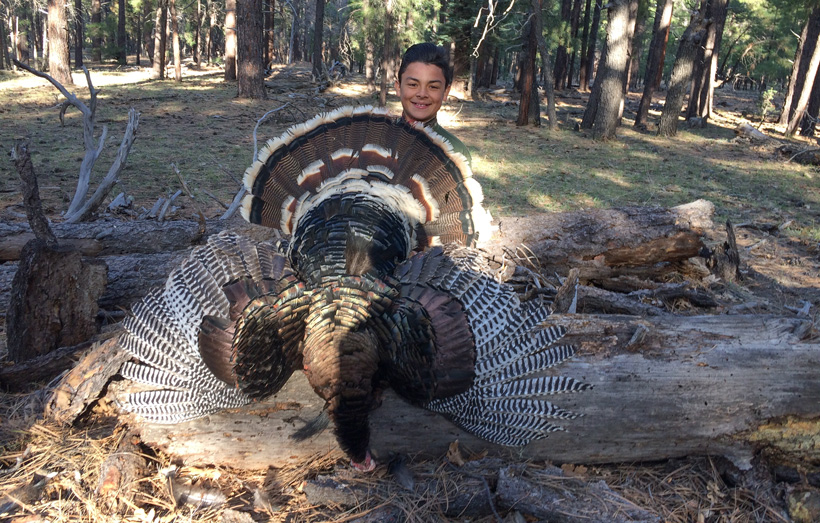 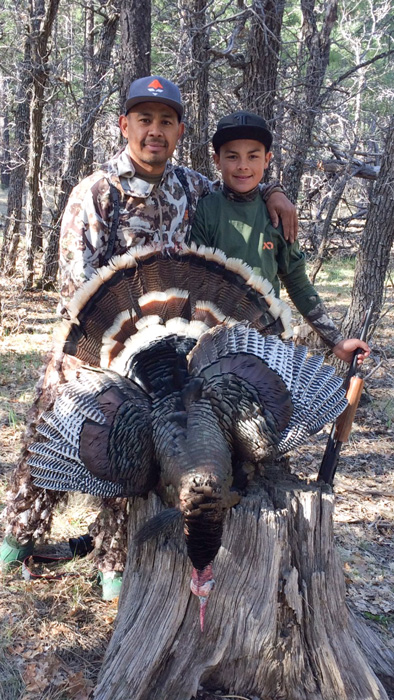 The year started off great! My 12-year-old son, Gannon, harvested a huge Merriam’s turkey in Arizona. He also drew three tags in three states with New Mexico antelope being the first one. To increase our odds in the draw, I used the goHUNT Outfitter Directory and contacted Mark Crump of Rebel Ranch Outfitters — a goHUNT Business Member. We applied in the outfitter draw and I believe it helped out quite a bit as we drew one of two tags available. 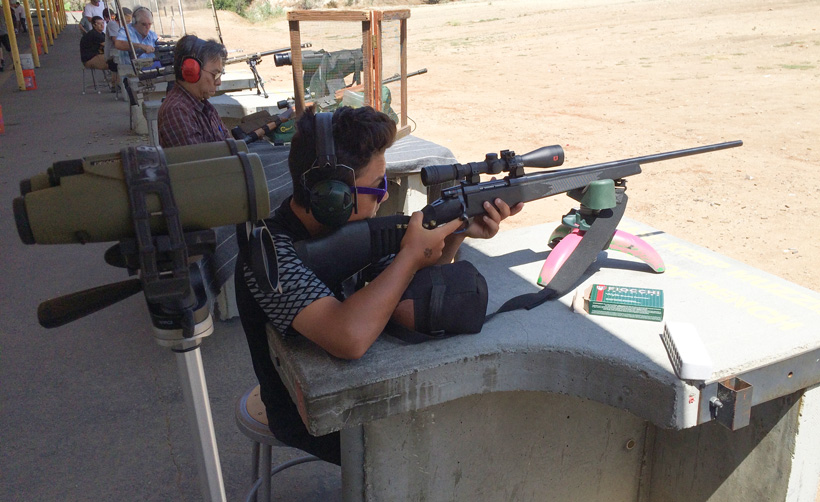 Juggling Gannon’s busy baseball schedule, we began to prepare for the hunt by going to the shooting range. Because we’d never hunted antelope before, I also started to research the species. We usually drive to our hunts, but this one would be different. We flew out of LAX due to a tight schedule as Gannon was playing baseball up at Cooperstown, NY just a few days prior to our hunt. After TSA checks and weird looks at the airport, we were off on our adventure. 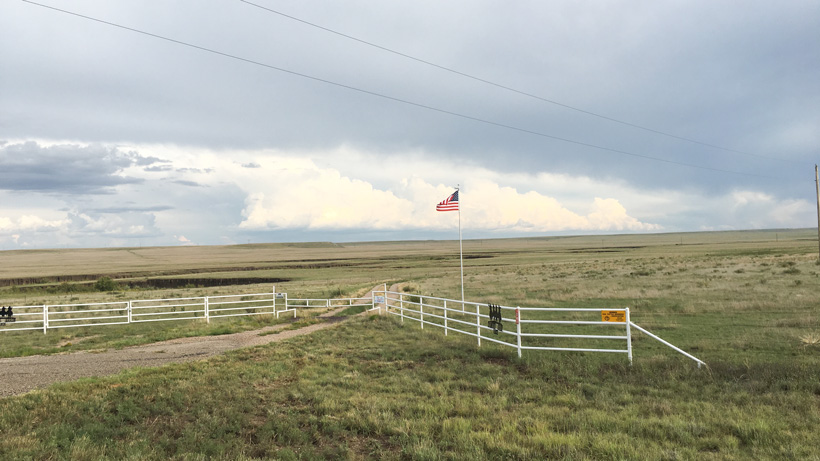 Mark Crump picked us up without delay in Albuquerque, NM and we stopped at the local Walmart to stock up on food and drinks. We arrived at the JT ranch in Unit 59 on a Thursday evening to scout, which was two days prior to opening day. 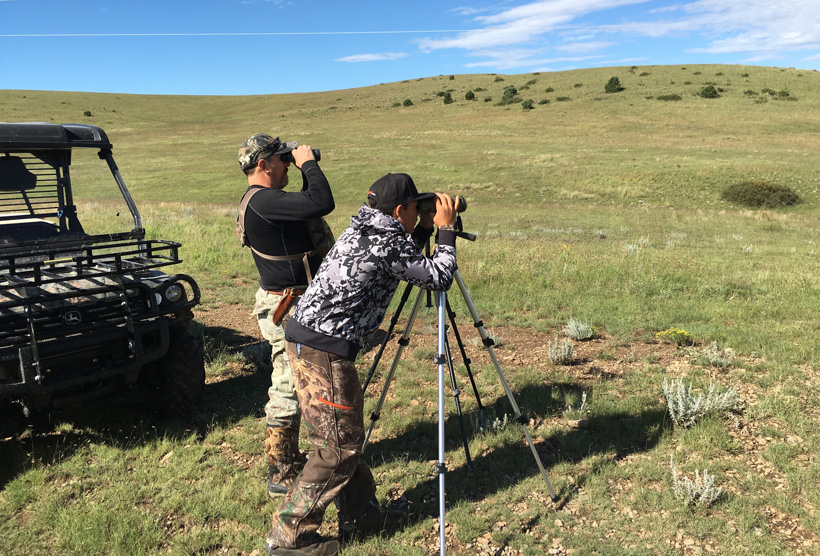 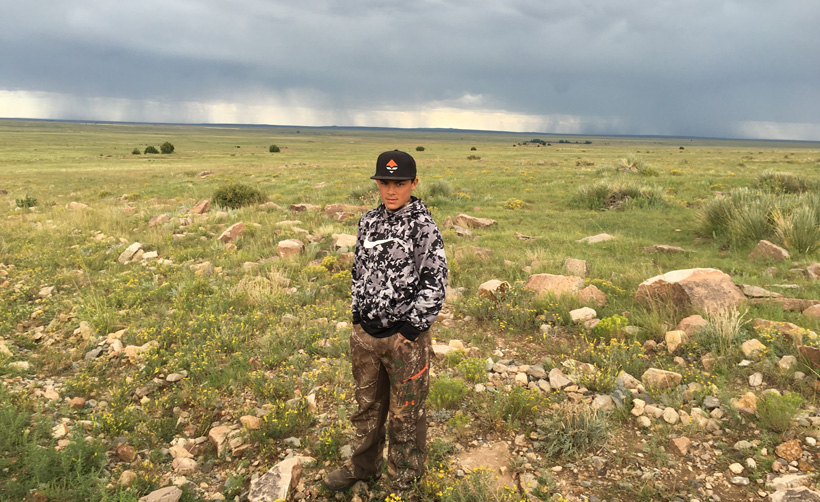 The views were amazing. The weather was sunny at times before turning stormy. We saw plenty of antelope that evening and we were stoked! The next day, we spent time learning the roads, private land boundaries and water sources. We saw a herd of elk and a very nice velvet mule deer buck as well as many does. We located multiple herds of antelope and came up with a game plan for Saturday. 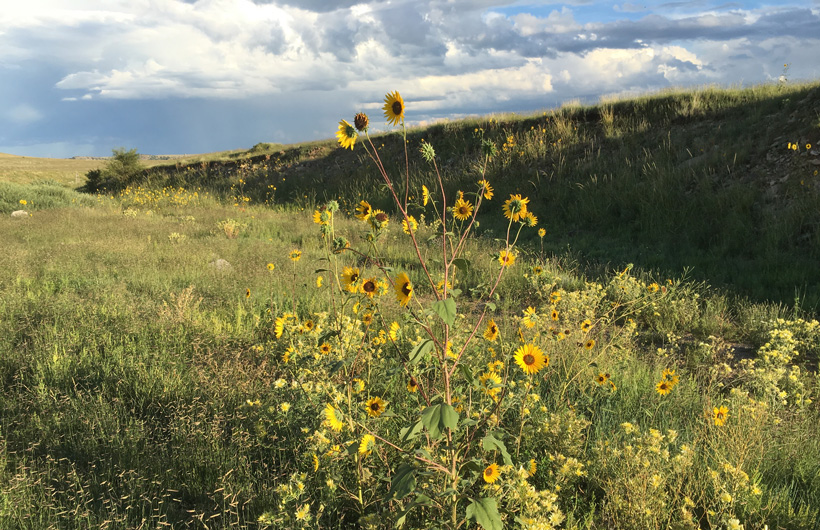 Opening day was busy and, due to the fact that we were spotting big bucks right away, we changed our game plan and immediately started hunting the bucks we were seeing. After a quick strategy session, Mark and Gannon began a long stalk about a half mile or so. After what seemed like forever a shot rang out and I began to wonder what had just taken place. More shots rang out and I was getting restless, anxious to know what was happening. As it turns out Gannon missed, which wasn’t a big deal since we were seeing lots of antelope. By mid morning, we were in for another long stalk; this time it was me and Gannon. After a few hundred yards of belly crawling, I heard some sort of coughing or snorting sounds. I didn’t realize it then but a buck was snorting at us! He gave us a perfect 100 yard broadside shot and Gannon missed again and again. I figured it had to be buck fever because he usually shoots well. Then I figured that the gun could’ve gotten banged up on the plane.

We decided to sight it in and discovered that it was a little off. Maybe that was the reason for missing. That evening we couldn’t close the distance to make any more shots. The weather started to get stormy and we got caught in a lightning storm, which was pretty scary. We decided to head back to the motel for the night. 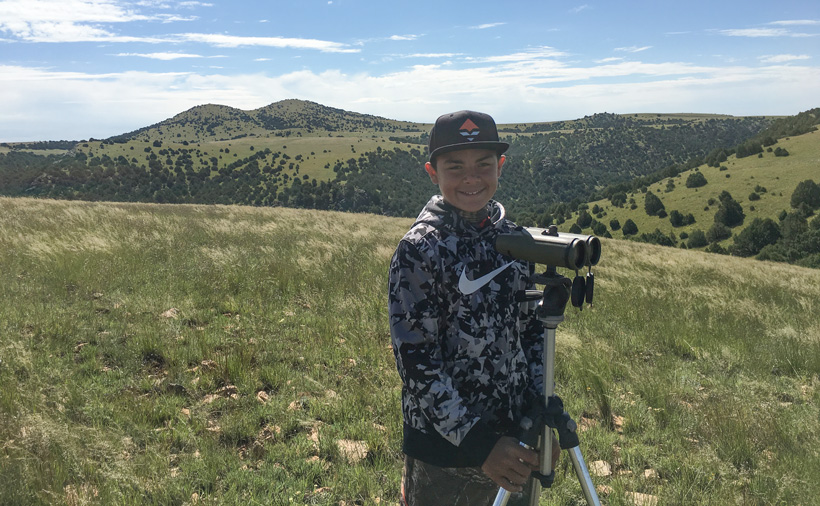 The next morning, we didn’t see any bucks. We decided to split up and glass different areas. Gannon and I went one way and Mark went the other. As soon as I set up the tripod, I spotted a buck through my glass but he was far away and running fast. I watched him as he continued up a mountain, which surprised me because I thought antelope were flatland animals. A few minutes later, I spot another antelope but I can't tell if it’s a doe or a buck. 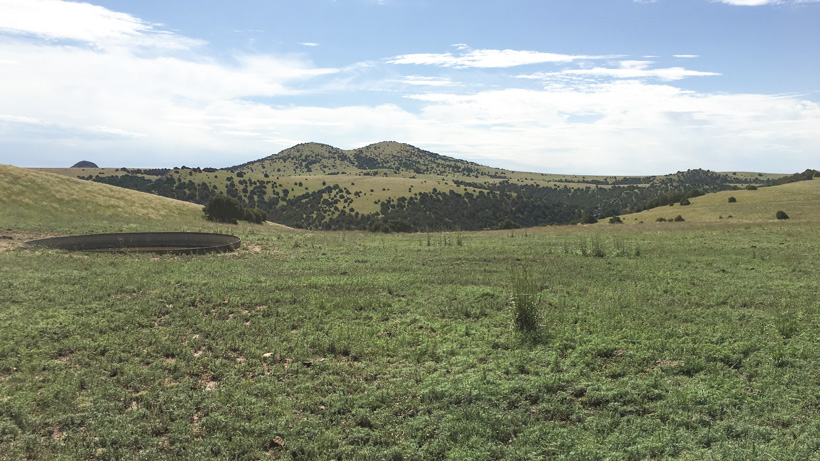 After discussing it with Gannon, we decided to sit and glass to see what would happen. Meanwhile our guide, Mark, hasn’t seen anything. After about 45 minutes, we realized that it was time to put a stalk on this antelope. It was a long stalk—about a mile—but we had a creek bottom that covered us most of the way; the last few hundred yards would be belly crawling.

The subtle depressions and rolling hills are deceivingly flat and we did not lay eyes on that antelope until we were about 80 yards away. Fortunately, for us, it was a buck! He was a little guy, but, nonetheless, a trophy for us. 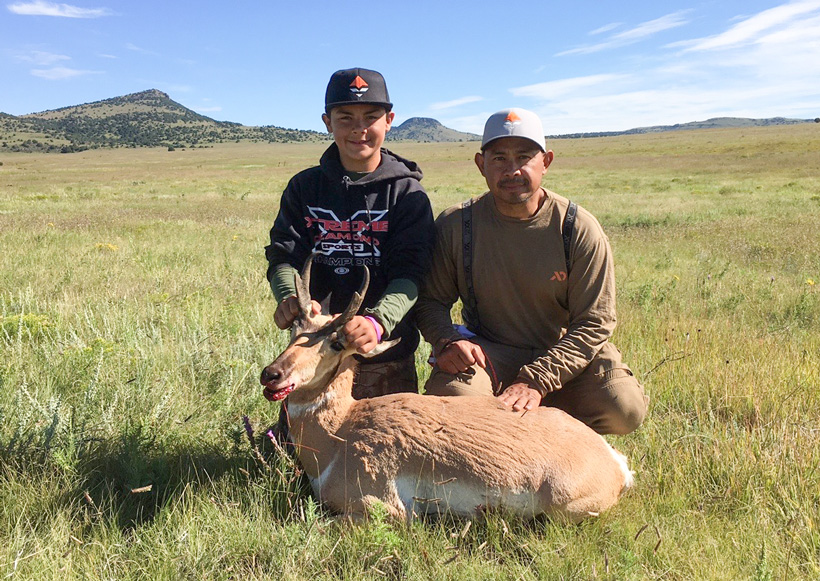 Due to the terrain, Gannon could not get a clear line of sight using the bipod on the rifle. So I got on all fours and he put the bipod on my back and made the shot; antelope down. 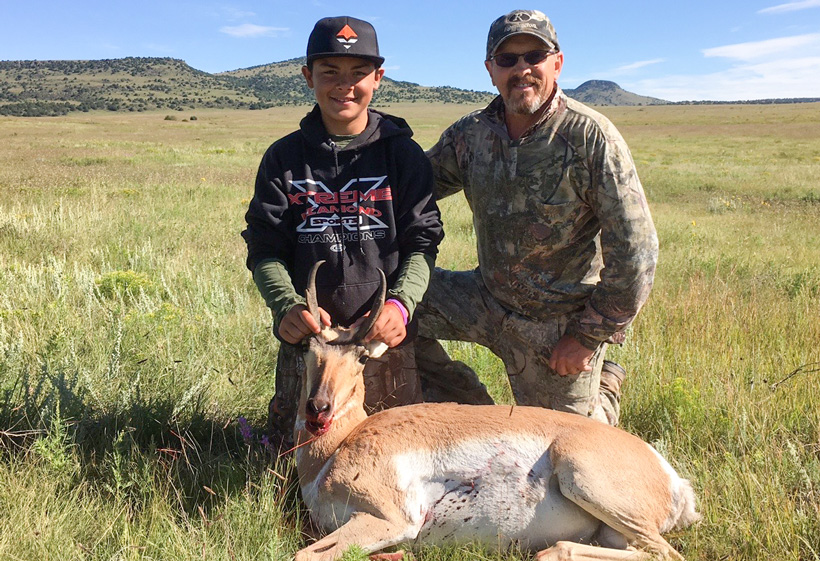 Gannon and Mark with the buck. 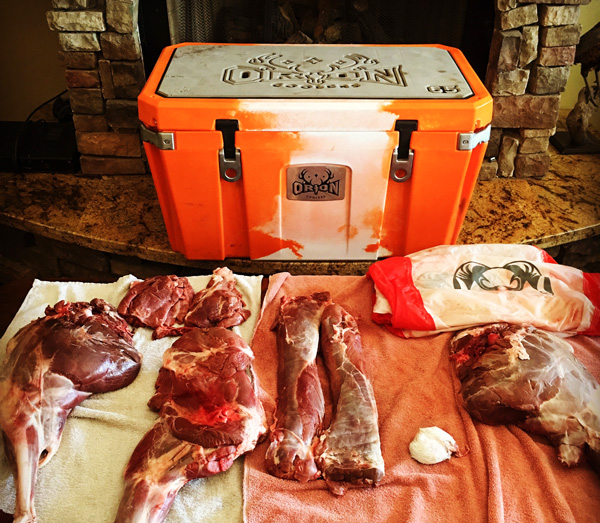 This was a great experience for all of us and will provide a great meal. A big thanks to goHUNT's INSIDER, Mark at Rebel Ranch Outfitters and especially my wife for being supportive of our hunting. 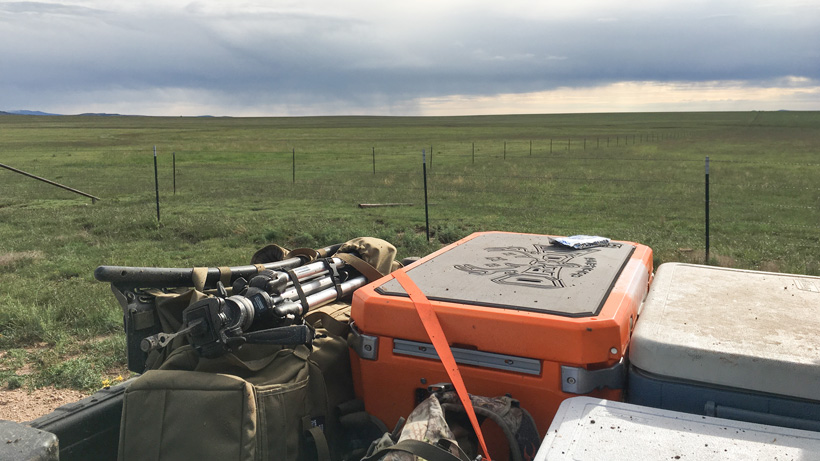 Our next stop is southern Utah for mule deer.