It was April 19, 2013. The application deadlines for the 2013 draws had passed, and the wait was on. As it happened, I was on my one-year anniversary with my wife in Costa Rica enjoying the relaxation and sun when I opened the email that would change the entire scope of my 2013 hunting season. 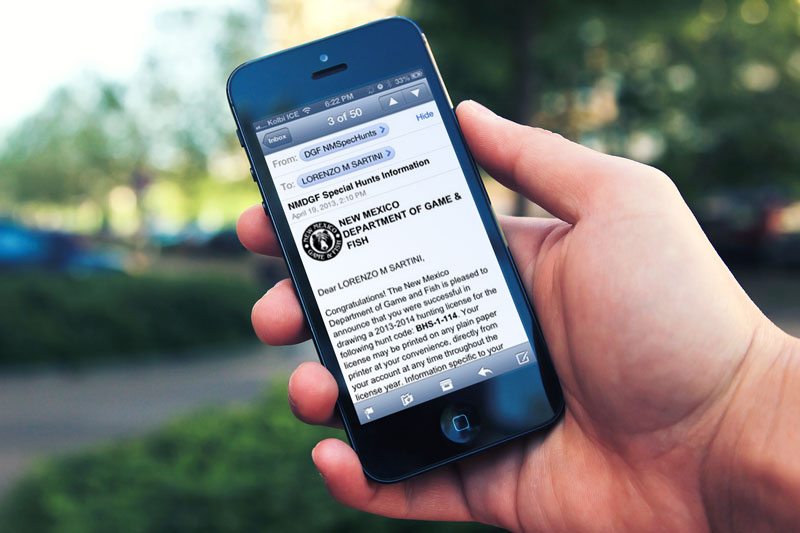 When the news actually sunk in, the rest of my vacation was preoccupied by thoughts on two things: I was officially going to start my grand slam quest, and I wasn't going to settle for a ram smaller than 170". 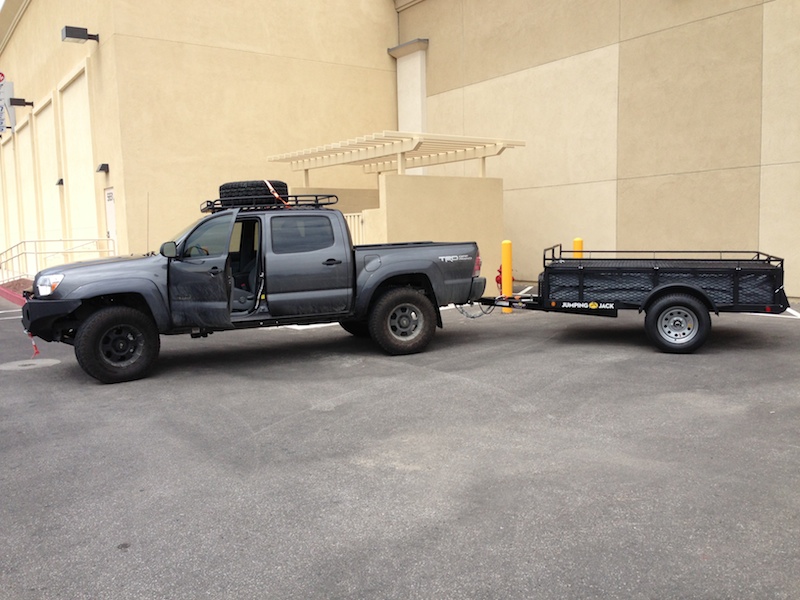 I used that summer and early fall to prepare and train for my hunt. I made sure I was ready in all categories, starting with accommodations. I had wanted a Jumping Jack Trailer for a while, and this hunt made the purchase worth the money, as there was going to be no lodging or services within a couple of hours of where I wanted to set camp. 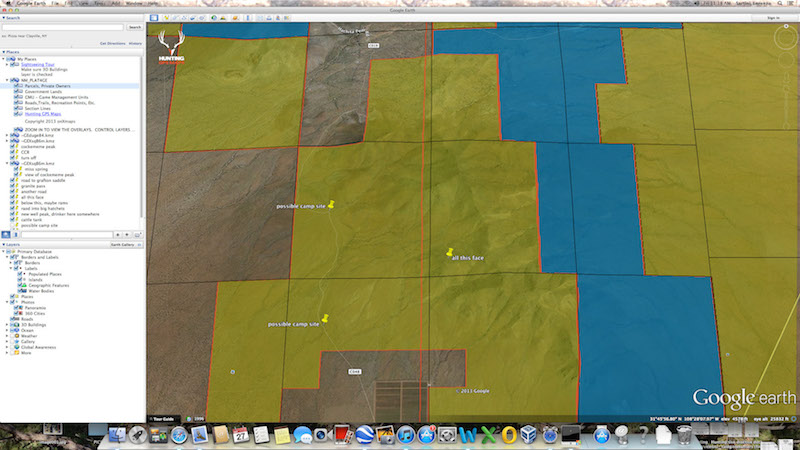 As the opening day of my hunt came closer, I was in heavy research mode of where to hunt and the logistics of the overall trip. I spent tons of time on Google Earth plotting my hunt from an aerial view. I had done all the planning necessary and spent countless hours researching where to hunt and how to hunt it. I carved out the dates of October 1st through October 5th to hunt, but with having a desert sheep tag I wasn't taking the hunt lightly. So, I planned to get to my hunting area four days early to do some scouting. 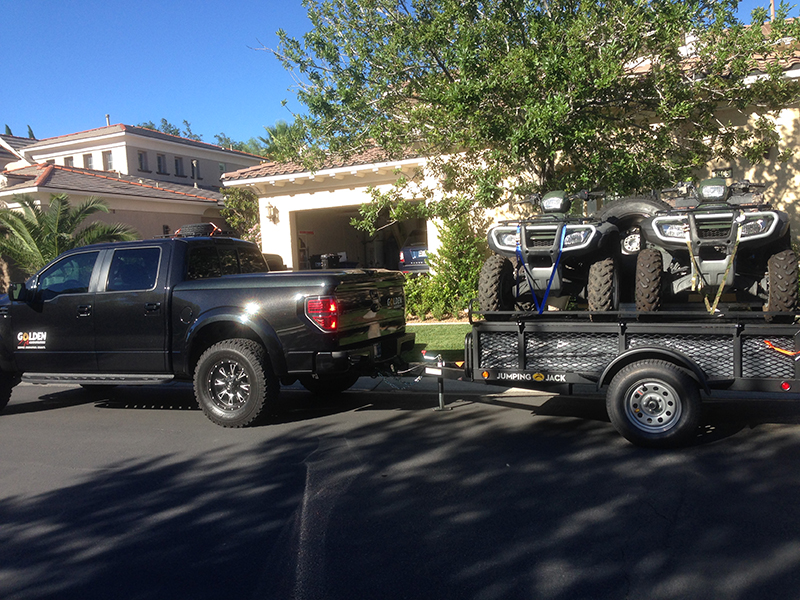 The time till my hunt flew by, and before I knew it, I was leaving my house and on my way to the airport to pick up my good friend Vince Huff. It was just him and me who were going to brave the southern New Mexico desert -- and we were ready in every way. The Jumping Jack Trailer was loaded up with sleeping arrangements, 10 days of food and water, and the ATV's that were going to get us to the places to find the rams. 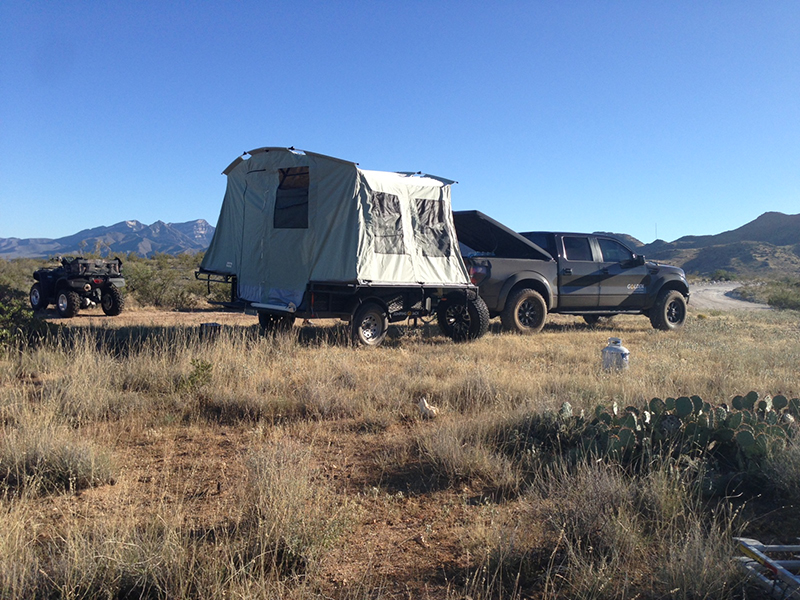 The drive from Las Vegas, NV to where we dropped camp took about 12 hours. The campsite was in a beautiful spot at the base of where Vince and I planned to hunt. We strategically chose a campsite that gave us the ability to glass a sheep drinker tucked away in the saddle of the mountain above us. 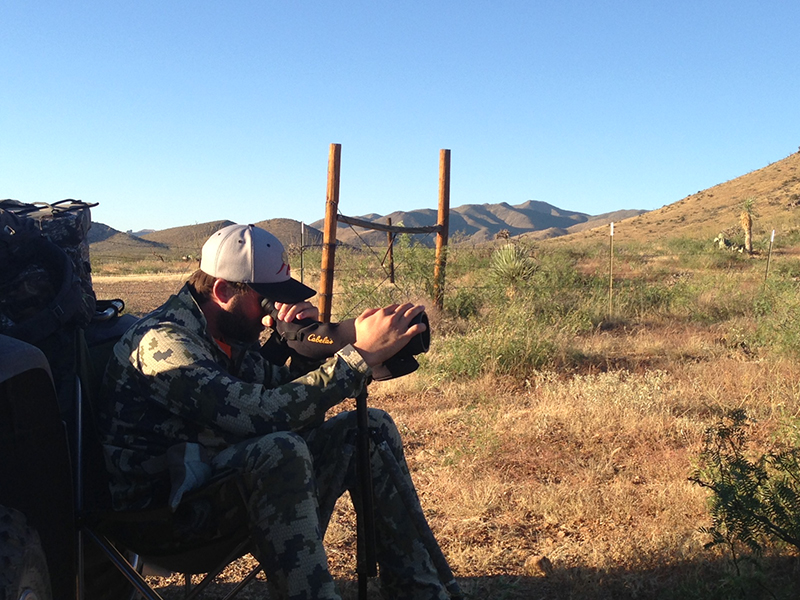 We had four days to scout, and with all of the research done for this hunt, we were able to hit the ground running and start turning up rams. 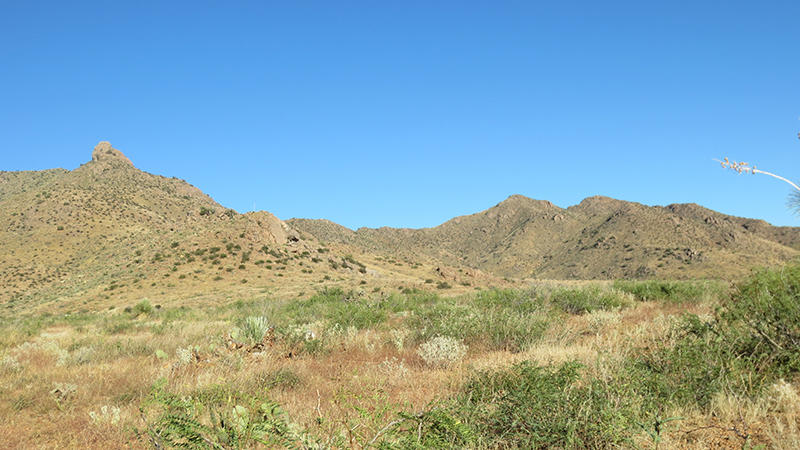 We chose to hunt a small mountain range that lay in the middle of the hunting unit. Although this mountain range was relatively small in acreage, there were plenty of cuts and canyons for the rams to hide in, and with a population of only one ram per square mile, finding them was no easy task. 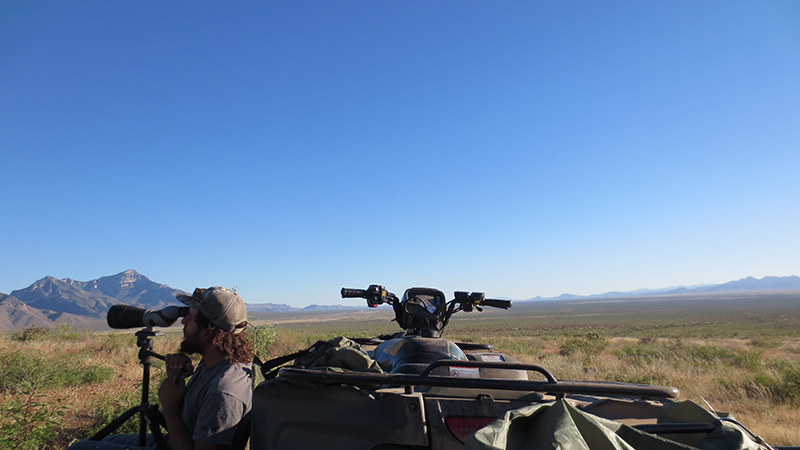 Day one of scouting was a success as we turned up two rams feeding in the bowls above us. Now, after seeing them on the hoof, the reality of being able to harvest my first ram was setting in. 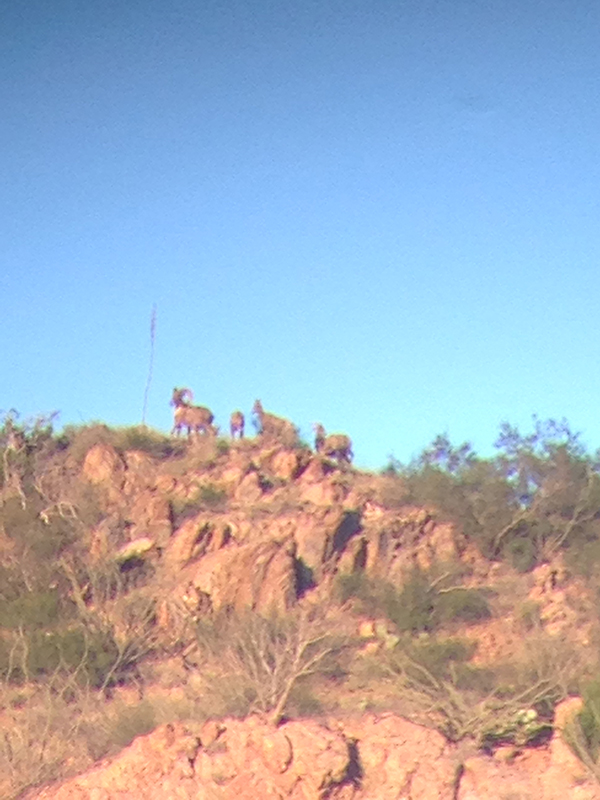 The two rams we found were fun to watch but not exactly what I was looking for. The first one was a small, young ram, gathering his ewes. 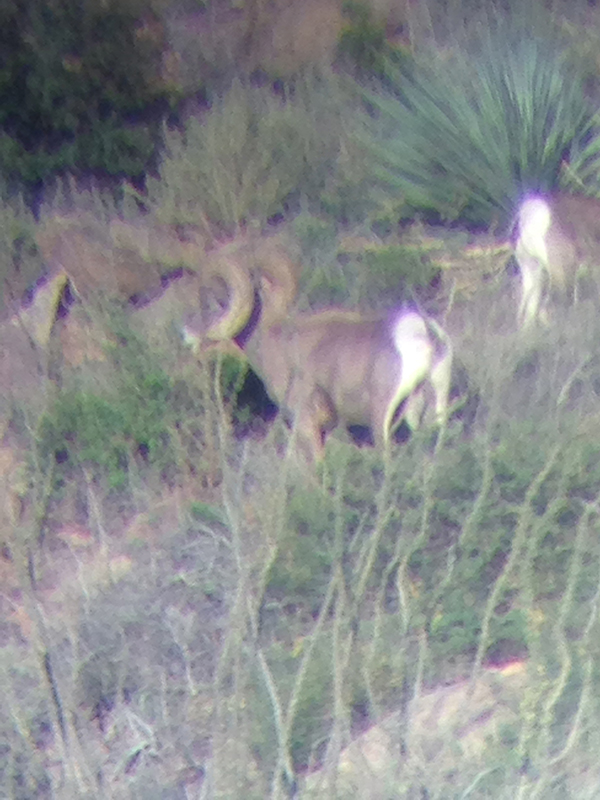 The second was a short, curled mature ram that was a nice 160" class. 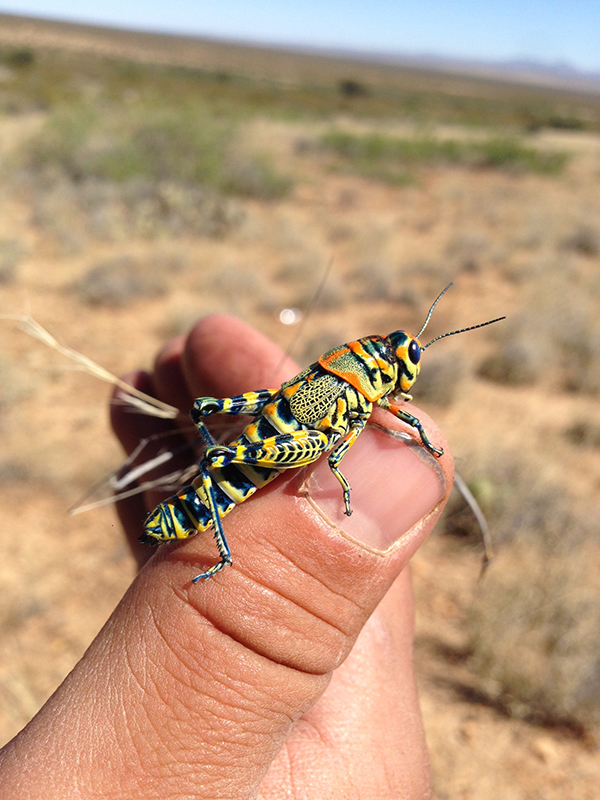 In our scouting, we also turned up some Boone & Crockett "Thunder Bugs" -- or at least that's what we named them. These monster bugs made it tough to get those afternoon naps in. That desert was the harshest environment I had ever been in, and just the bugs proved it. 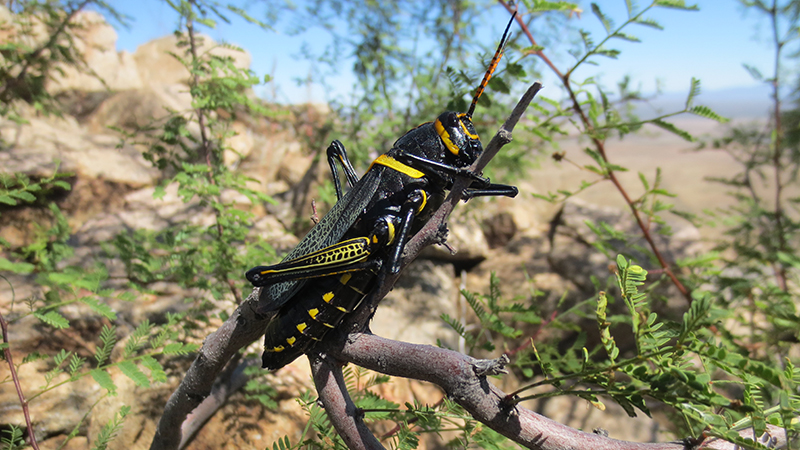 Close up of another "Thunder Bug."

With the low populations of rams, in four days of scouting we had only turned up seven, with one being another nice 160" with an ear tag. But, on the positive side, two of the seven rams were shooters and in the 170" class. 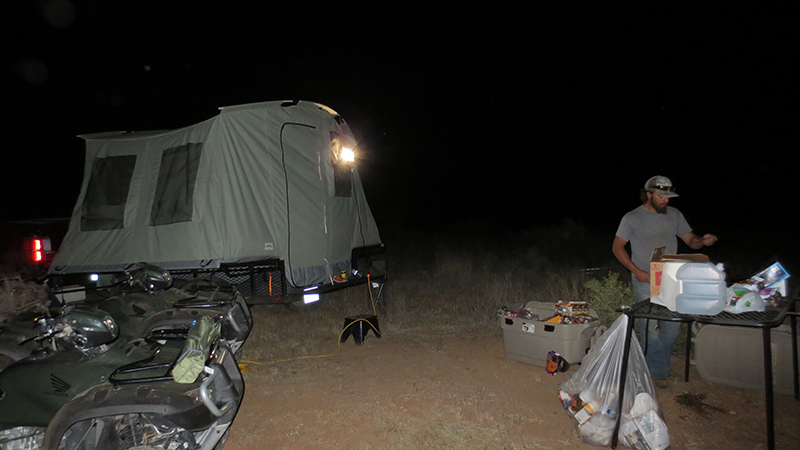 On the last night of our scouting, Vince and I talked strategy over dinner and discussed the best plan for the opening morning hunt. We decided that climbing to the peaks and being at eye level with the rams was our best chance to make something happen. 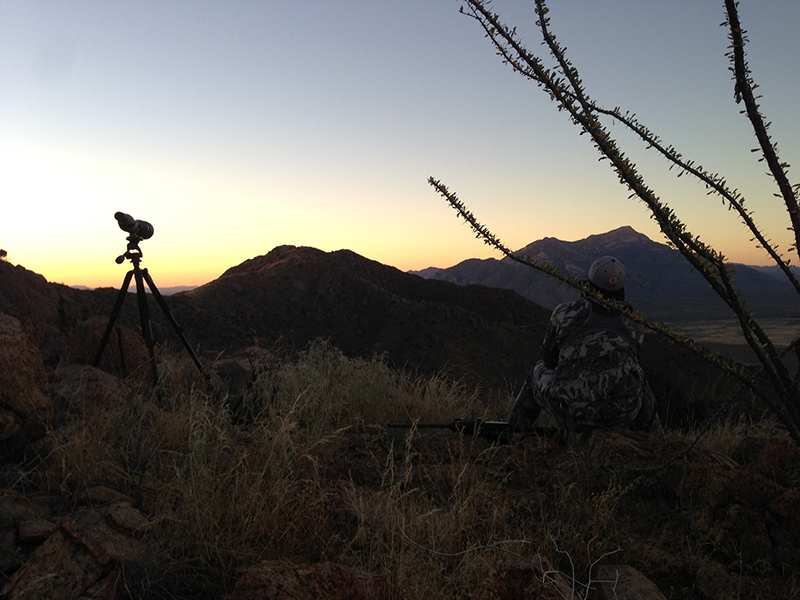 After hiking through the darkness of the early morning, we sat at the top of the highest peak on the range we were hunting, to start glassing. 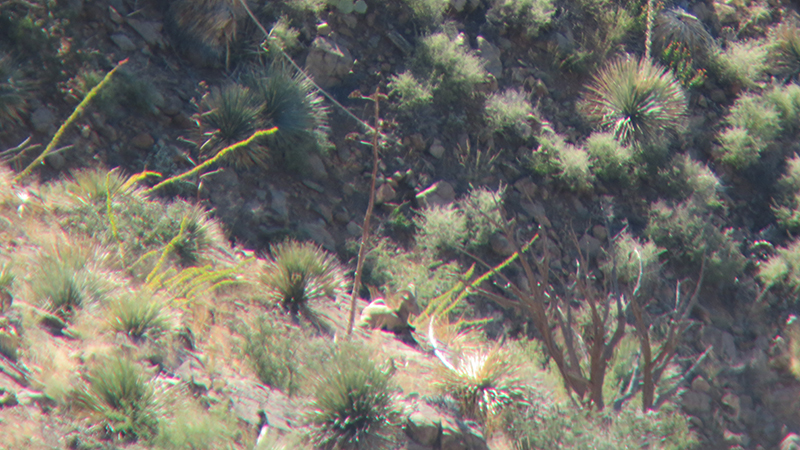 As the sun came up and started heating the desert floor, we turned up some small rams and ewes sunning themselves and enjoying the nice morning. 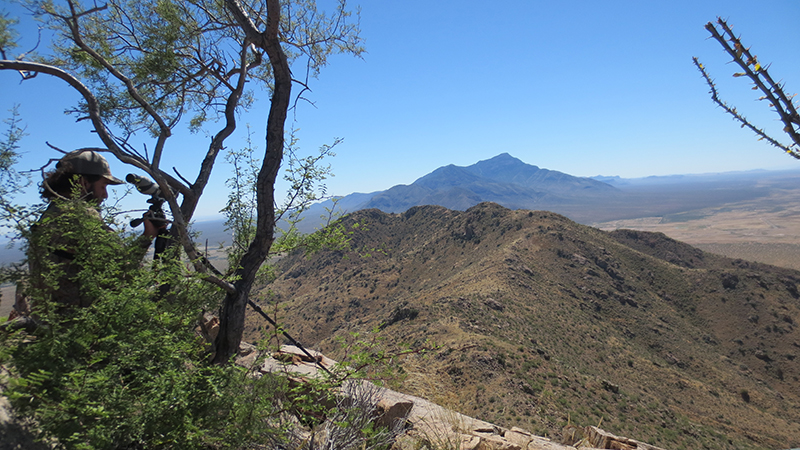 The day dragged on, and no rams were showing themselves. The desert heat was taking its toll on us. The temperature reached the mid 90's, and Vince and I tried to find any shade we could while we glassed. 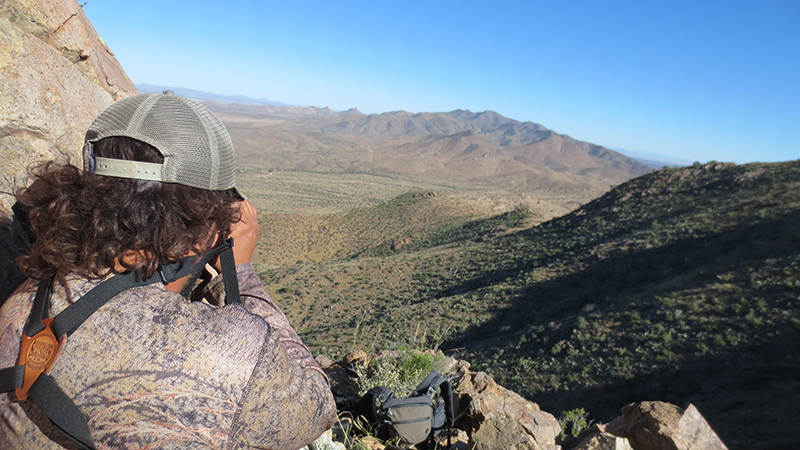 The day was coming to a close and the temperatures finally started to drop, allowing for the sheep to get out of their beds and feed. About an hour before the sun went down, Vince had found the 170"-class rams we saw while scouting. They were feeding off the backside of the peak we were glassing from, and when we realized they were "the ones" we quickly put a plan together. 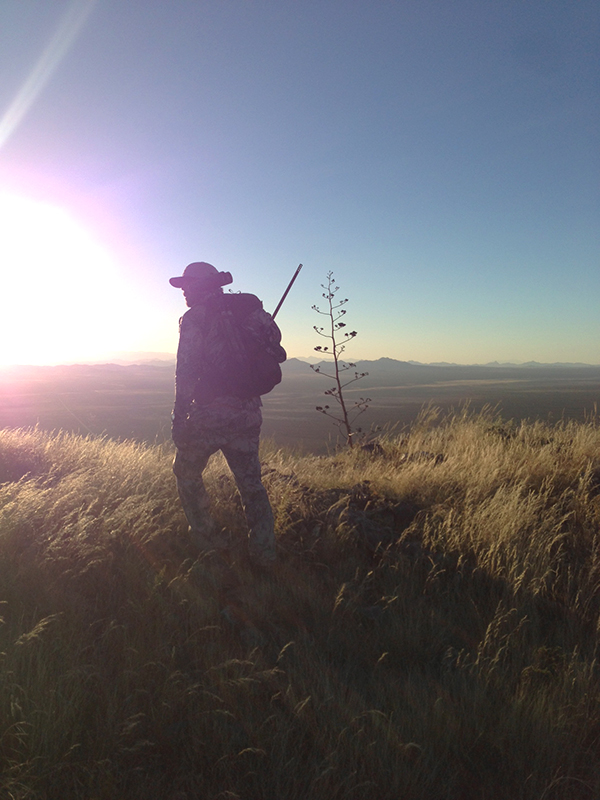 We ran down the mountain to a spot we thought I could get a shot from. Luckily the rams worked down the mountain just as we though and I was in a great position. I found my ram in the crosshairs, and I softly asked Vince the last question I needed. "I think he goes over 170" -- what do you think?" Vince quickly replied, "yeah, I agree." That's all I needed, and the shot echoed through the canyons. We heard the loud "smack" of the bullet hitting its target, but the ram was too tough to go down. With us not seeing the ram go down and the night coming in quick we decided to let the ram lay over night making for a long and restless sleep. The morning was very much welcomed to come as soon as possible. 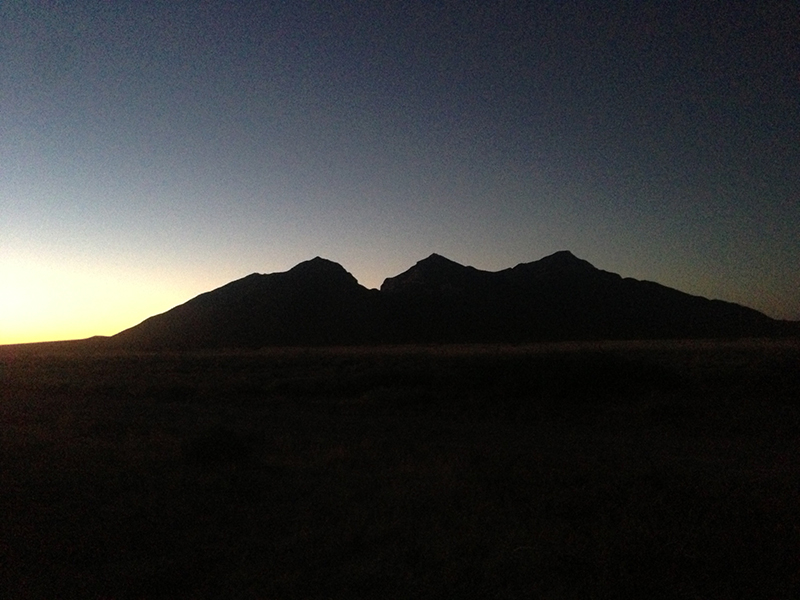 The morning arrived, and Vince and I were on a mission to find my ram. It took us no time to find the blood trail, and we were elated to find that my ram had only made it 25 yards from where he was hit. 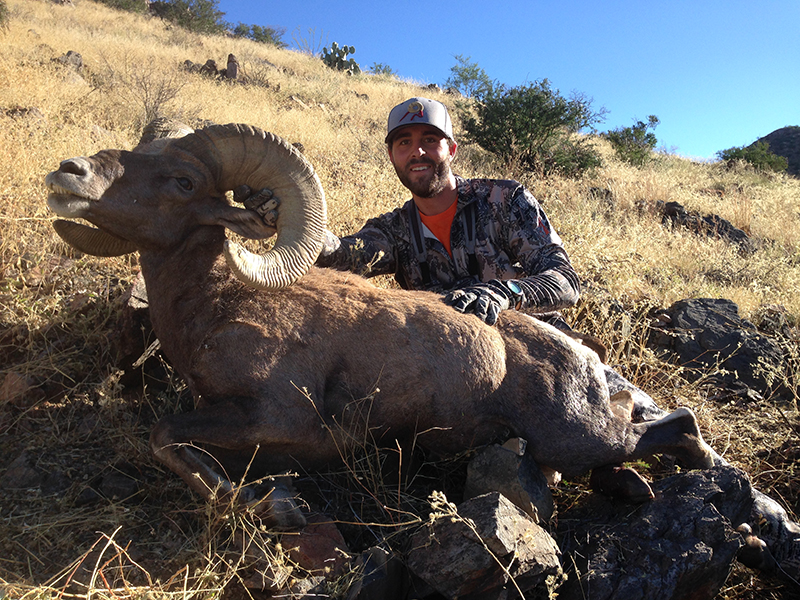 We both had huge smiles on our faces, having just harvested a desert ram, but no smile compared to mine at that moment. 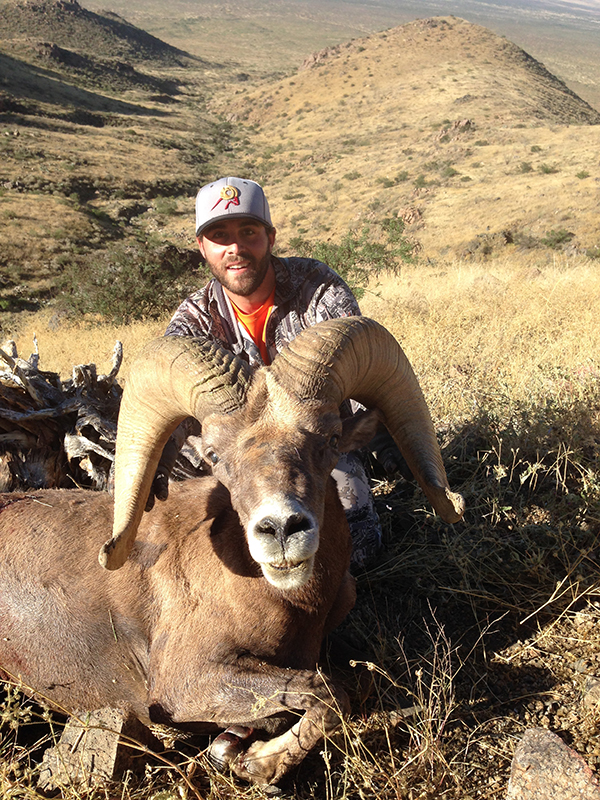 Another angle of the ram. It was surreal feeling to hold this ram in my hands. 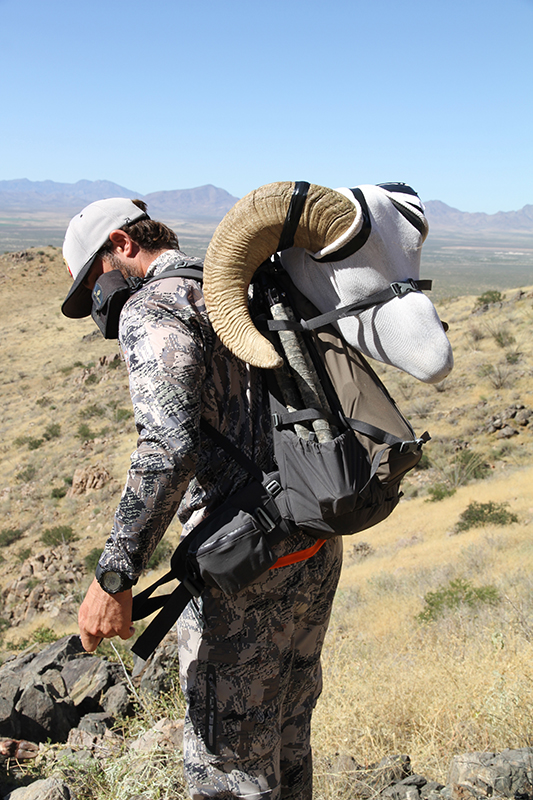 However, with the heat as bad as it was, the moment was short-lived, as we had to get my ram off the mountain and back to camp as soon as possible.

Just as fast as the hunt came, we were on our way back to town, with camp packed up and precious cargo riding with us in the truck. When we got to Las Crucas to check in my ram, we had to make a stop at Si Senior's for a celebration of we had just accomplished. 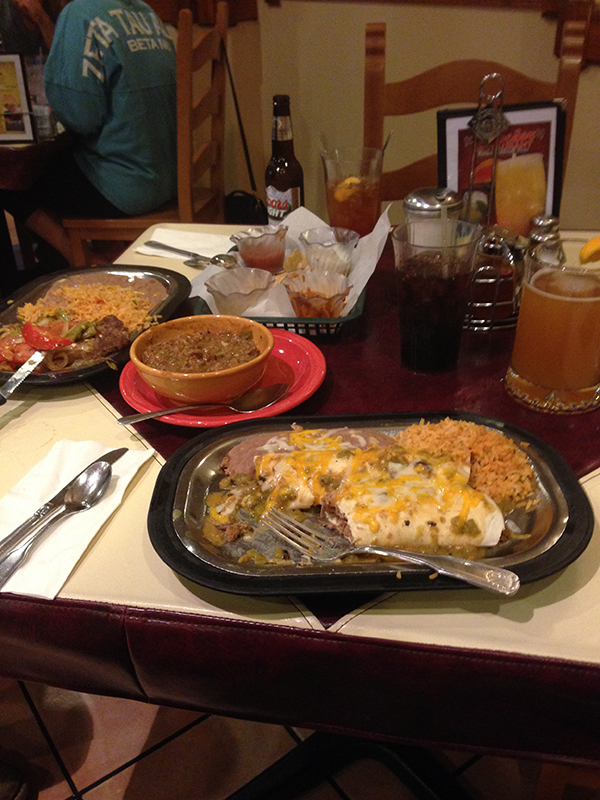 Nothing like celebrating with some great Mexican food and cold beers. It was a great way to cap off the experience we just created. 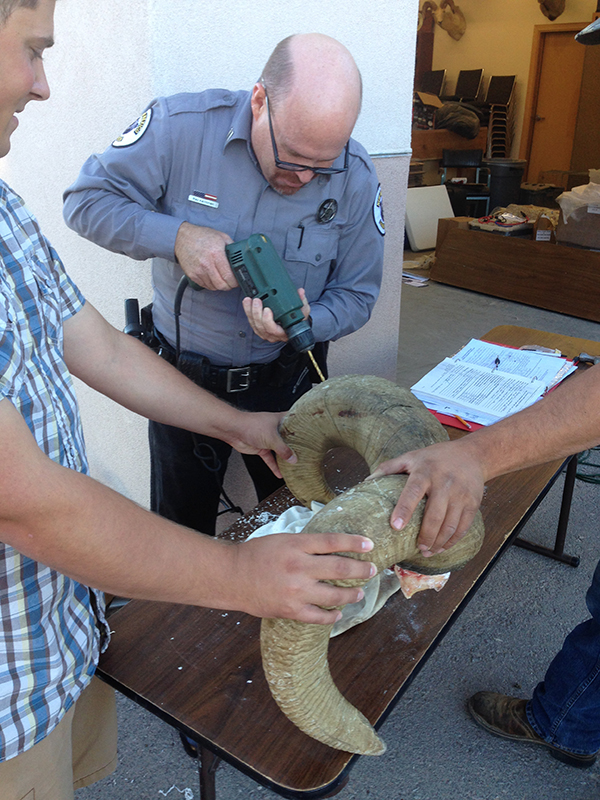 The next morning we checked my ram into the New Mexico Fish and Game office and got my ram plugged. It was official: I had started my slam quest anI i had a 170" desert. The hunt was over, and now all that was left was a 12-hour drive back home. It was all smiles for the entire drive.