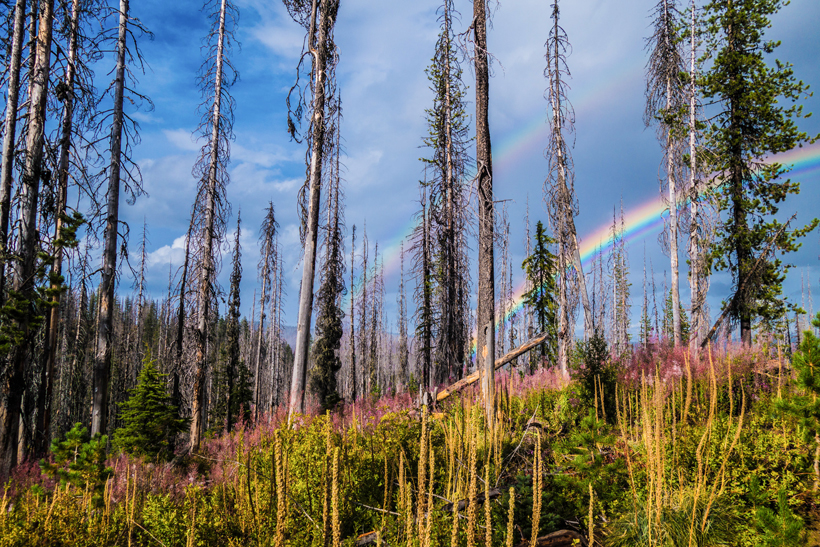 Spring is one of my favorite times of the year, particularly because it is application season! The irony is that as I logged onto the Idaho Fish and Game website to check the status of my 2014 Moose application, I was currently stuck in one of the largest concrete jungles in the country (Los Angeles) on business. Luckily, when I saw that my license number was drawn for the trophy moose hunt, it did not matter. Soon I would be wandering the backcountry in search of my prize. It was time to prepare for the biggest hunt of my life to date.

I spent the next several months pouring over data for my unit and looking at Google Earth. By now I knew that I would be hunting solo since none of my friends could take the time off to help on the hunt. The realization of doing a solo moose hunt for up to 16 days in a remote area of Idaho was starting to set in. 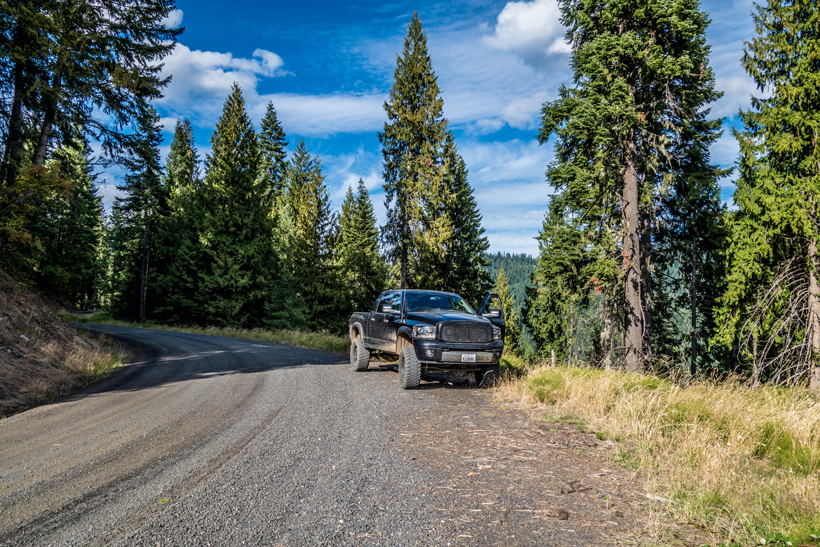 Because I live in California, it seemed unlikely that I would have the chance for a scouting trip, but at the last minute a window in my schedule opened to spend a couple days in the unit where I planned to hunt. I was curious to see how far my Google Earth judgment was off this time! The condition of the paintjob on my pickup truck after the scouting trip is a pretty good indicator of that! 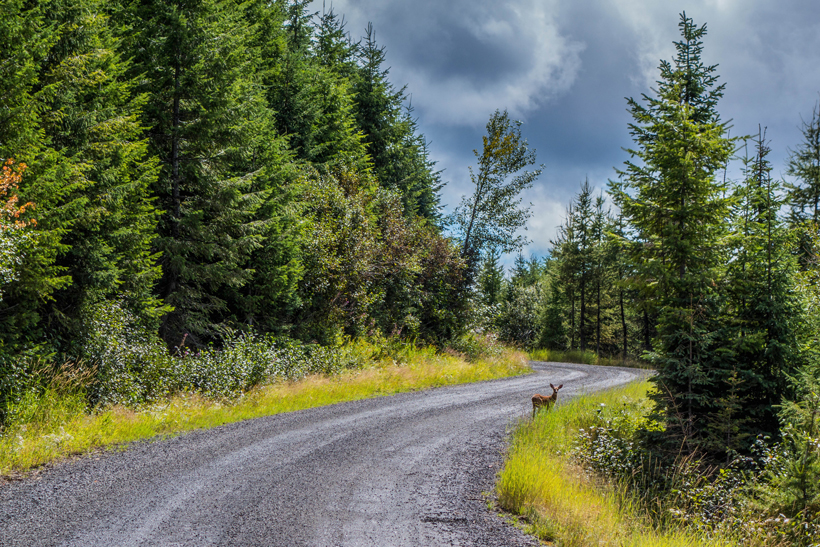 A whitetail fawn I saw on my scouting trip. Its mother had stepped off the logging road by the time I could snap a photo. 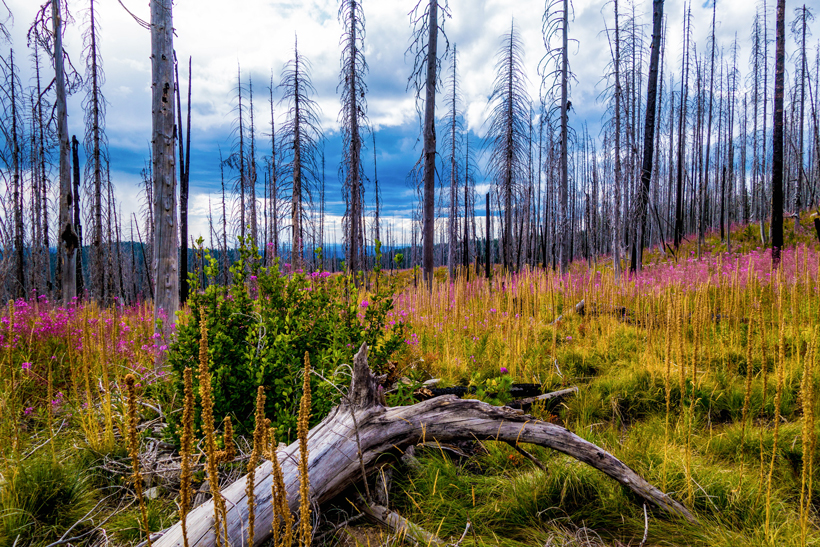 The country was beautiful and in full bloom on my initial trip to the unit. This burn was in the process of regaining the life lost in the fire years ago. 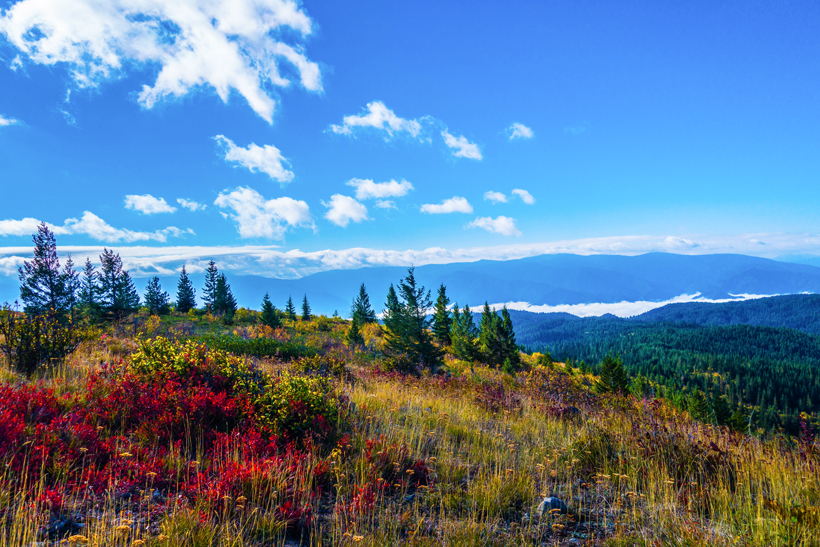 Having been able to scout the area I now had more of an idea of what I was getting into and I should have felt a lot better about the hunt than I did. It didn’t help that when I was near where I had narrowed down my hunting area via Google Earth, a guy I met chopping wood told me: “I haven’t seen a moose in here in ten years, and I’ve hunted elk here for 20.” He also told me that I better have a wolf tag, too. I also met some Idaho Fish and Game officers on a creek lower in the unit that told me that there were “not many moose in there nowadays, but we have seen a few over the past few years.” Regardless, it was too late to be worried; in just under a month I would be back, prepared to hunt for 16 days if that’s what it took to kill a moose. 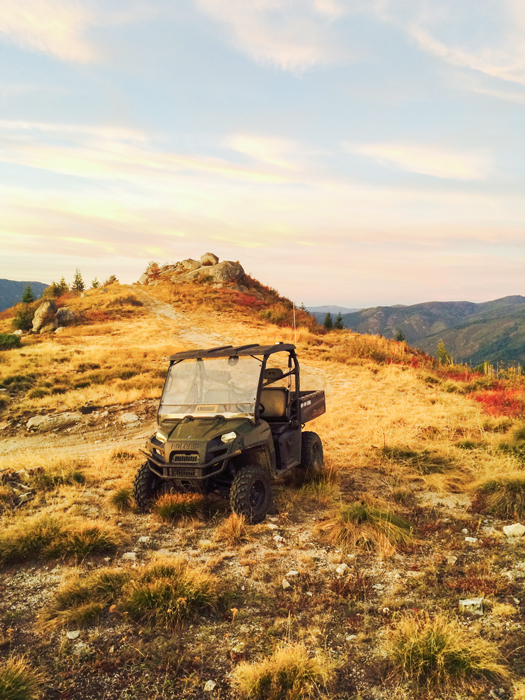 To save what was left of the paint job on my truck I rented a Polaris Ranger to get around in the hunt area. This decision turned out to pay huge dividends. 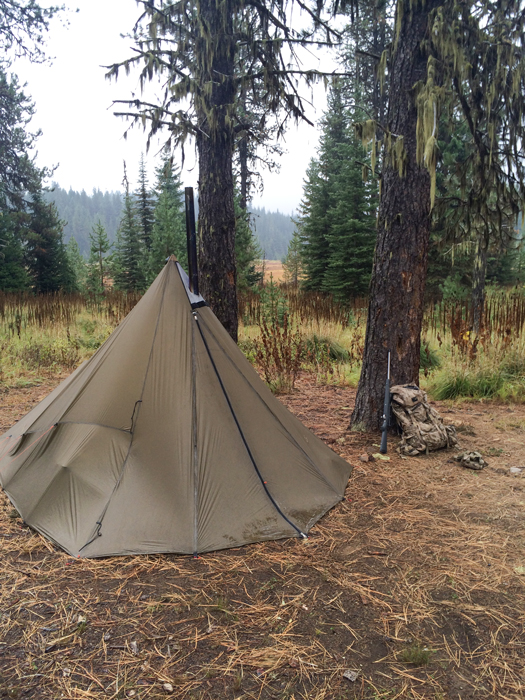 After arriving, I spent most of the day getting all my gear into the area and setting up camp so that I was ready to hunt the next morning. That first night a storm was moving in and I woke up to the sound of heavy rain pouring down on my Kifaru floorless shelter. The rain pounded through the night and at one point I awoke to a stream flowing under my cot. The next three days were very wet, but each night I was able to come back to camp, fire up the Kifaru stove, and dry my gear out for the next day of miserable weather. Moose sightings or sign were nonexistent as I covered miles and miles of ground in search of either. 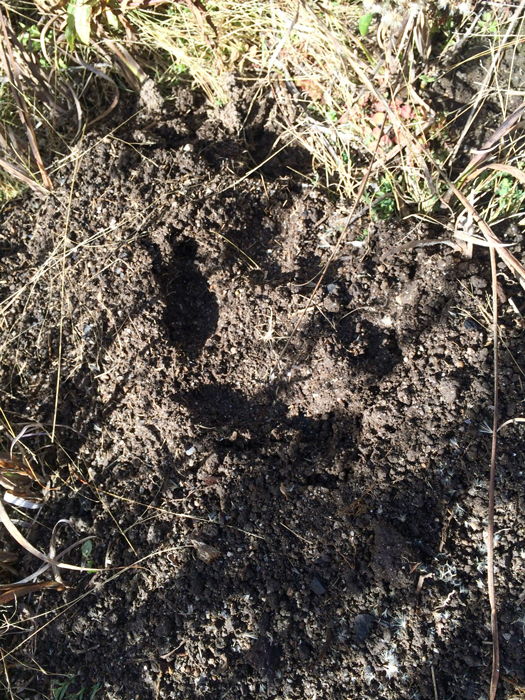 Each night I would call my brother back at home on my satellite phone for a quick weather update as I did not have cell service in the area. After days of cold and wet weather I was pleased to find out that clear skies were in the forecast. Unfortunately, I spent the next five days waking each morning to a pack of wolves near my camp. I searched the area for signs of moose with no luck. I spotted elk, deer and bear but not a single sign of moose. 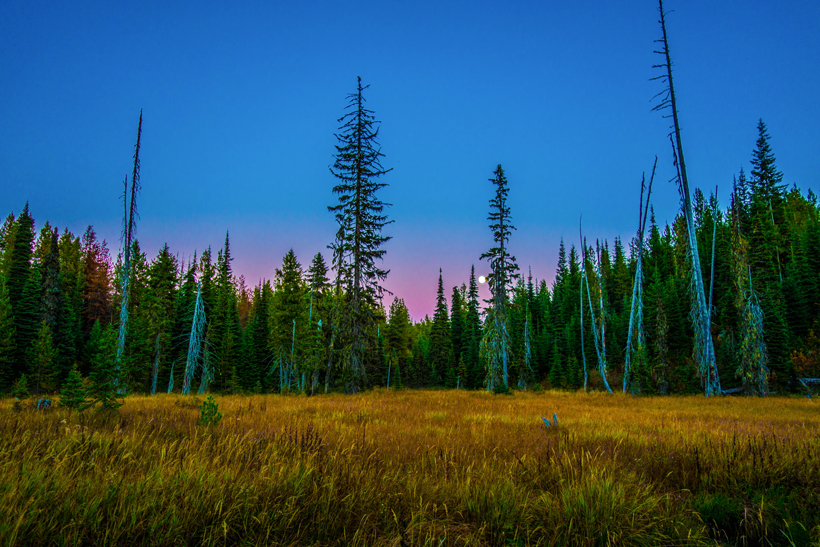 On day nine I packed up camp and moved 15 miles across the unit to another area I was aware of where moose were harvested in prior years. I had not scouted the area, but I knew I had to do something different or I would be eating tag soup! 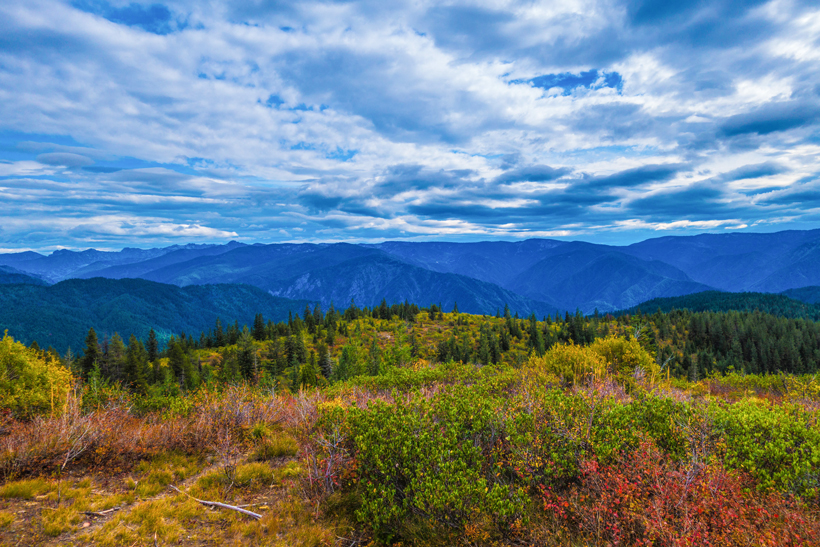 After a day wasted moving camp I was hunting again. The new area had more roads that I was able to use to my advantage. Each night and morning I would walk old skid roads in search of moose sign. It did not take long before I started finding sign from the last rain the week I arrived! 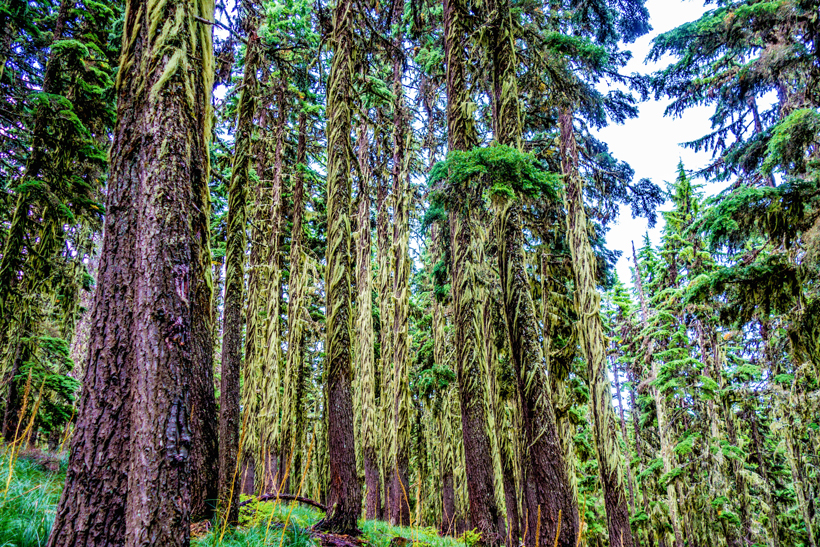 On the 12th day I found myself a couple miles down one of the only old skid roads I had yet to walk. I saw some week old bull tracks pressed into the mud on the side of the old road but with only a few days left to hunt and not seeing a single moose my spirits were getting low. 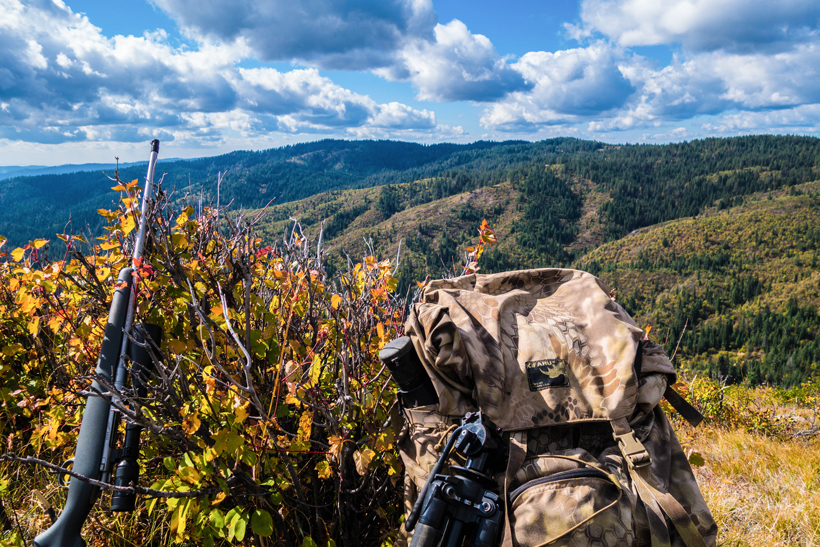 Once I reached a good vantage point, I sat down and cooked some instant oatmeal and had a drink of water. I sat there and told myself: “Keep going until it is dark. You never know what’s around the next corner.” 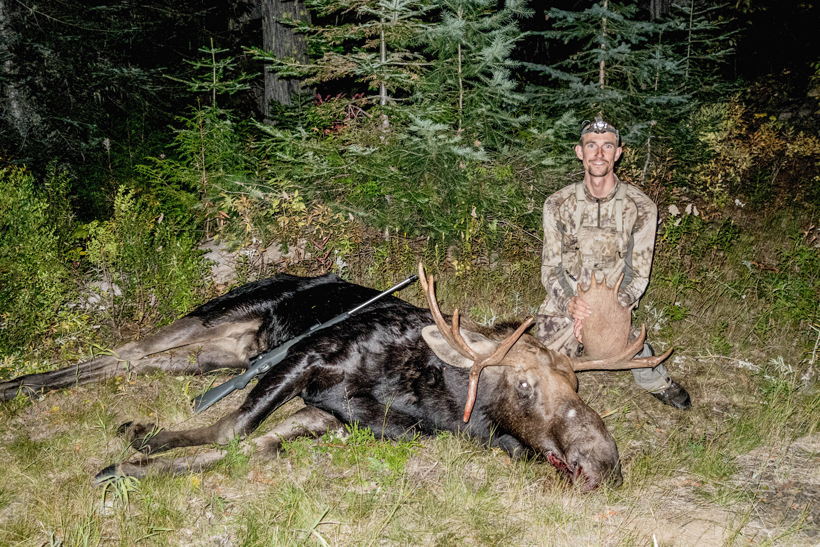 I got up and continued. No more than another half mile and two bends in the road late, I rounded the corner to spot a massive black object standing about a football field away on the side of the road feeding. We both spotted each other at the same time. He raised his head to look at me and I went down to one knee at the same moment. As I clicked my safety off on my rifle and he came into view in my scope, I knew that he was a shooter bull. Instinctively I went into autopilot. My eyes focused on the the crosshairs of my scope and the recoil jolted me back. The bull instantly dropped at the shot. He was down! 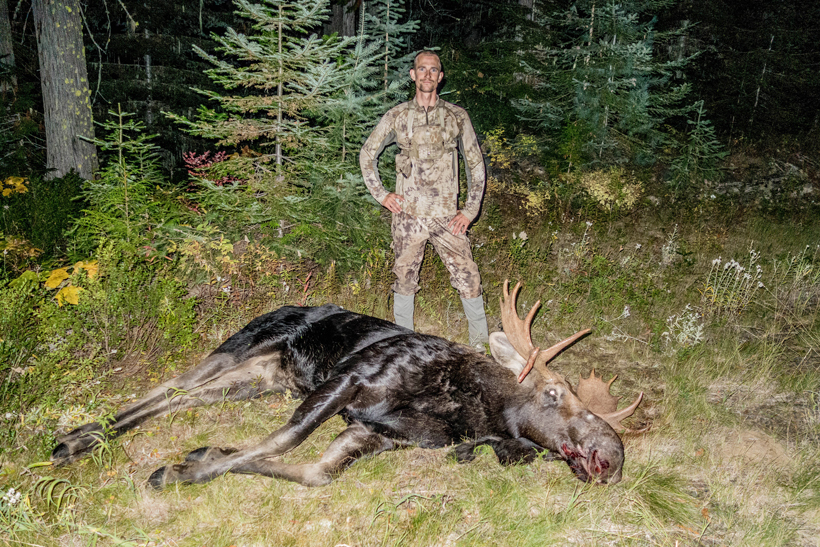 I quickly cycled another round into the chamber and started to approach the bull, ears ringing and in awe of how fast the hunt had materialized. I shot the bull one more time to finish him off when I got to him and then sat down next to him as the emotions flooded my mind. 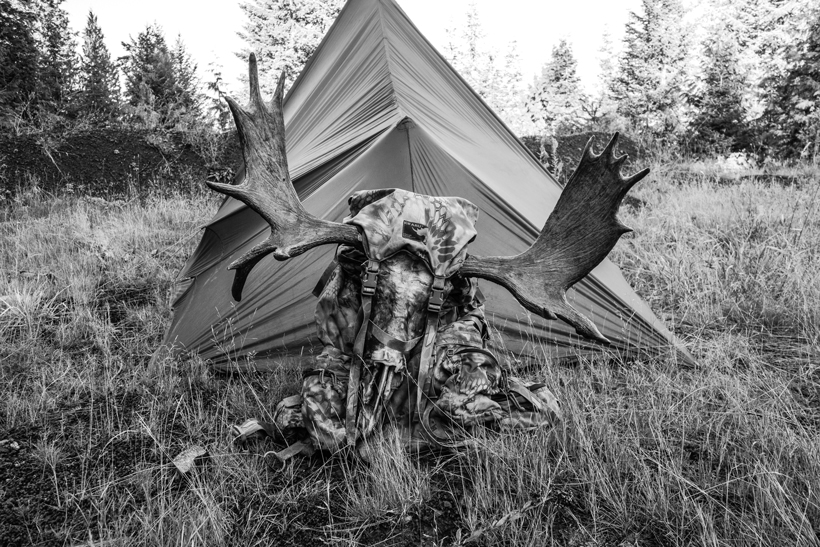 Then reality sunk in and I realized what I had ahead of me -- eight straight hours of gutting, quartering and caping a Shiras bull moose by myself! 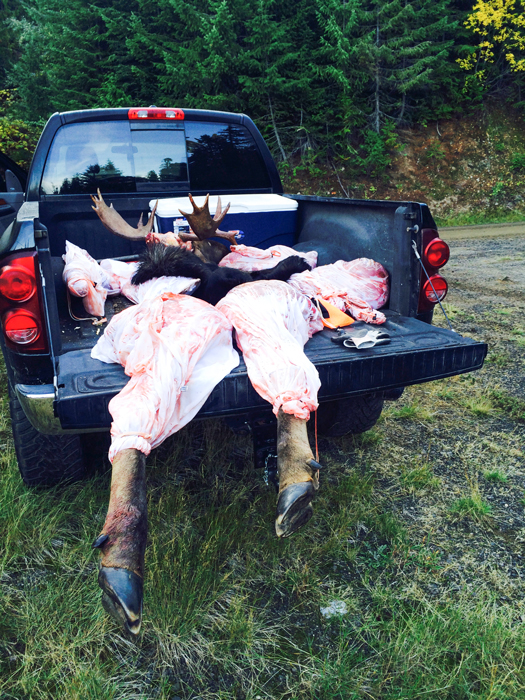 When I finally got him back to town and got a tape on him at the Idaho mandatory checkpoint, he measured right at 36” wide. At that point inches did not matter to me. This hunt had redefined me as a hunter and gave me experiences I will remember, relive and retell for the rest of my life.