The Utah Dedicated Hunter Program (DHP) provides participants the opportunity to hunt archery, muzzleloader and any weapon hunts to harvest two bucks within a three-year period. In exchange, each participant in the program must complete 32 hours of service on a pre-approved project that benefits wildlife and complete an online conservation and ethics course.

In my experience, participating in the DHP has been a very worthwhile and gratifying experience, both in the hunting opportunities it provides and allowing me to give back by working on a variety of habitat improvement projects. It has also given me the chance to scout and hunt one buck over three different hunts. 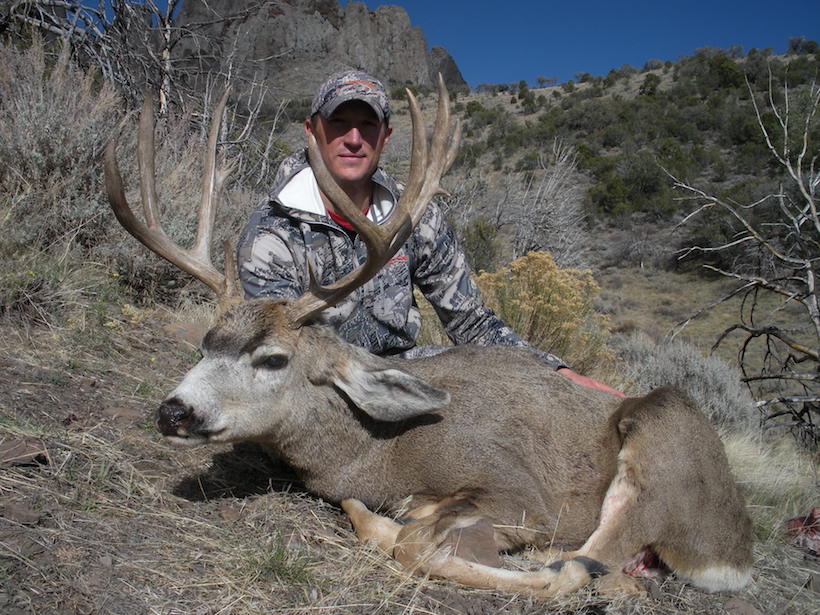 In 2012 I took a nice buck and once again was able to secure a permit in 2013 by being enrolled in the DHP. 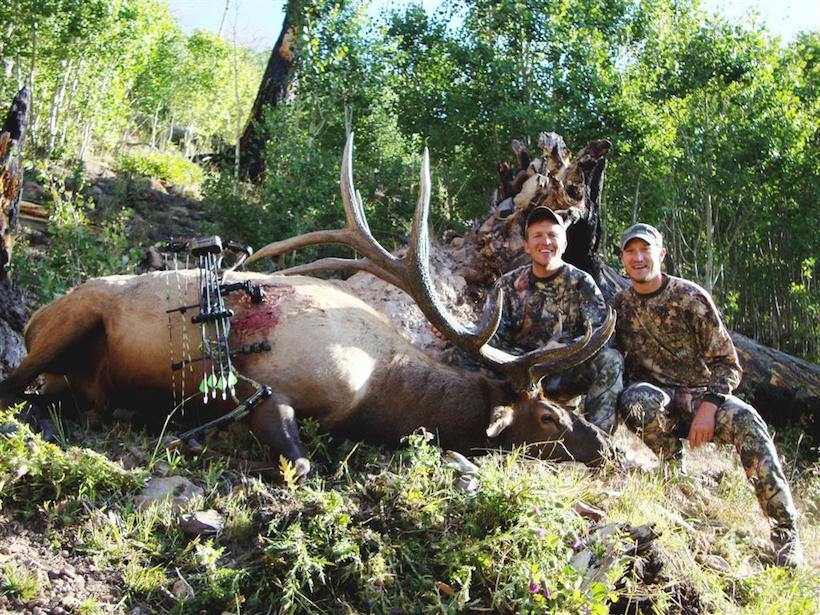 In 2009 my oldest brother Todd drew a coveted Archery Elk permit in Utah. Preparation for that hunt began with running together five nights a week. Not only was it key in helping him take a tremendous bull, but it became a passion for me and I’ve continued to run consistently since. 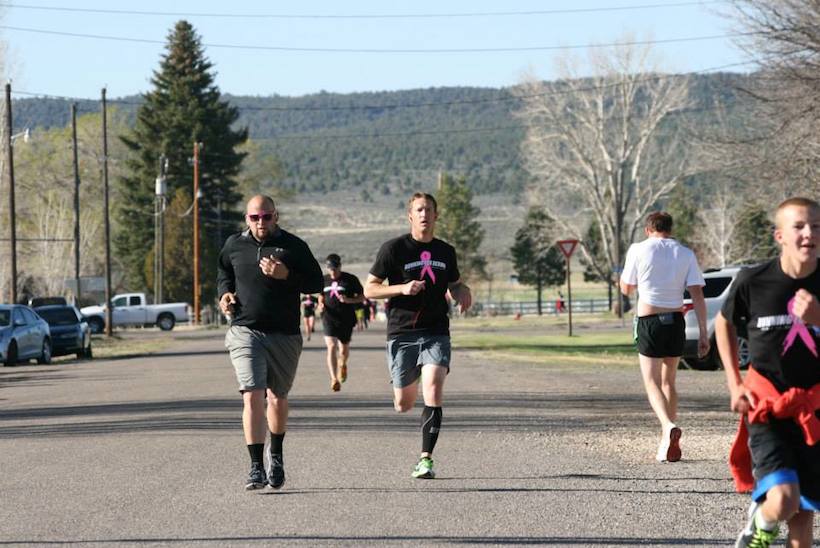 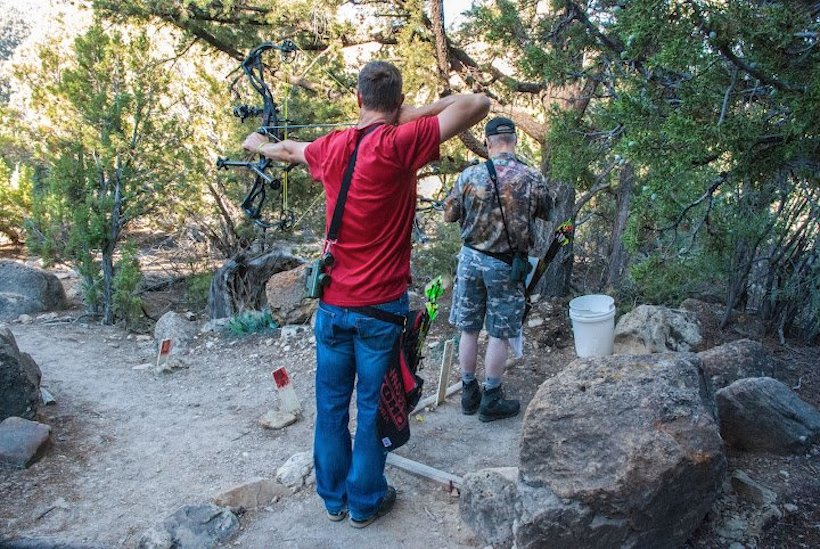 In addition to work, family life and running I try to shoot my bow as much as possible. Local 3D shoots are a great way to break in new gear and test myself.

In early July I got a phone call from a good friend who had an archery elk permit in the same unit where my deer permit was valid. He had been scouting a remote drainage that I had hunted during an archery elk hunt in 2010, and was able to catch a glimpse of what he thought was going to be a great buck. After further discussing the area, I described a spring located farther down the drainage that I thought might be a great spot to stick a camera, and later hunt elk. I hoped that the buck might show up, but over the next three weekends I spent hours glassing, trying to relocate the buck but never could. 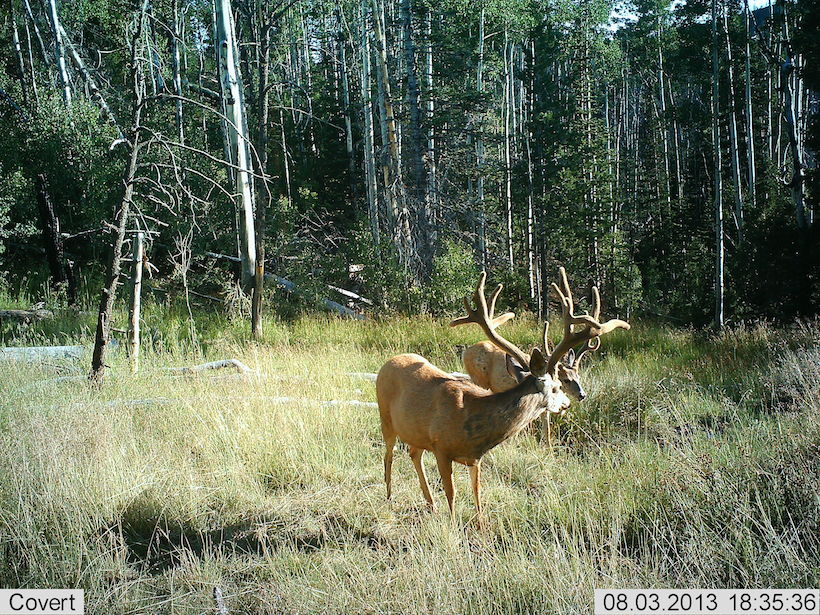 Finally, during the first week of August he showed up on trail camera in a BIG way. I decided to name him Tiger. I’ve had some luck in the past taking a few good deer, but I knew I had the opportunity of a lifetime in front of me, which is exactly how I explained the situation to my wife when I told her that she may not see me very much that fall. Generally, it seems no matter how well I plan or prepare prior to opening day I find myself backpacking alone in the middle of the night and this year was no different. I believe it was almost 2 a.m. before I made camp in a patch of mahogany. 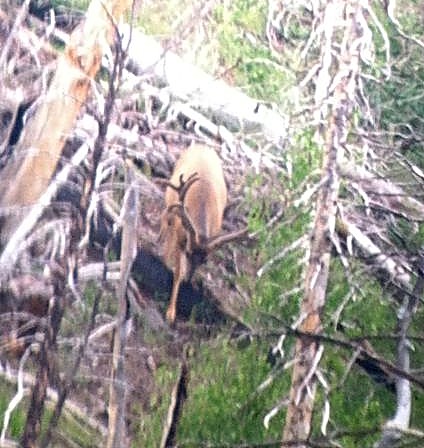 The next three days were a combination of torrential downpours, cold temperatures and lighting all around me. I saw a few elk and a few small bucks, but my equipment was becoming uncomfortably wet so I bailed off of the mountain feeling discouraged. I spent the next few days at work and once again, on Thursday night I started up the trail in the dark with my backpack on. The next three days were similar to my first, sitting in the rain glassing from dark to dark and listening to the lightning all night. Photos of scouting trips kept me motivated. 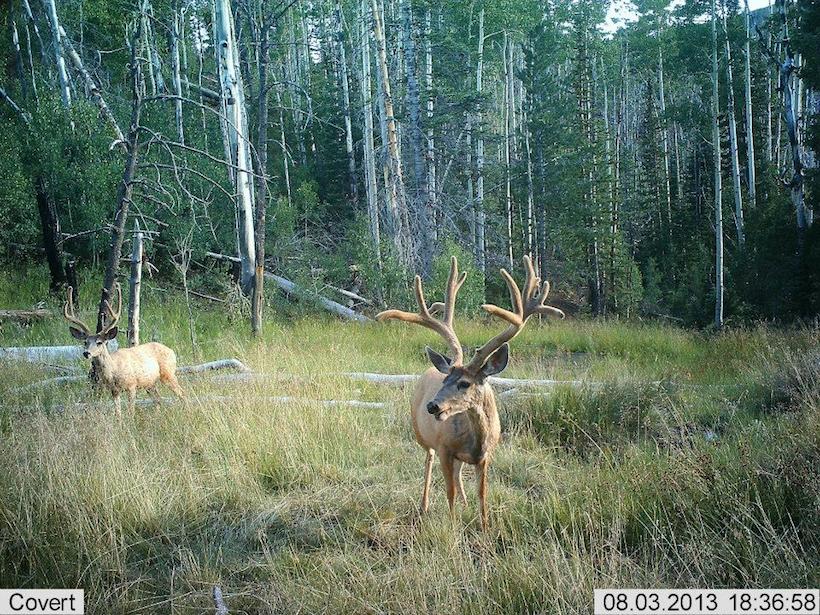 I was able to glass three other bucks that I had never seen during this stretch which gave me a much needed mental boost, but I still couldn’t find Tiger and I couldn't get the trail camera photos off of my mind. In my years of hunting and time spent backpacking, I have not spent any as soggy, as at the 2013 bowhunt. The last two weekends yielded no chances and although I hunted 15 days, I wasn’t able to make it happen on the bowhunt. I love to bowhunt, but the muzzleloader hunt has been gaining ground over the past six years. On the evening before the opener, I was once again packing in during the middle of the night and finally settled in my bivy sometime later, listening to the sounds of the wind whip through the old burn. Several times throughout the night I heard trees crashing to the ground.

By first light the wind had not lessened and just as I had expected there was very little wildlife up and moving. I glassed until almost 11 a.m. and then decided to catch up on some sleep. That afternoon and evening, working on the assumption that anything moving would likely be down near the canyon bottoms on a north facing slope out of the wind, I decided to hunt closer to the bottom of the drainage. I worked my way into the bottom of the canyon and then up onto a small ridge that gave me good views up one drainage and down another.

For a few hours I worked my way around the knob glassing. On my third pass around, I caught the backend of a deer a half mile up the canyon, moving through the same wet meadow where we previously got trail camera pictures of the buck. I stayed with the deer until it finally stepped out and I instantly knew it was a big buck. I had the wind in my favor and knew I had to make a move quickly. I threw everything in my pack and ran down one slope, up the next and down another. Once in the bottom of the canyon I used a wash to close the distance. For the final 150 yards I was able to sneak onto a small point that overlooked the meadow.

As I topped out, I could see a deer feeding 82 yards right below me, but it was definitely not the buck I was after. I scanned the area for the next 5 minutes trying to locate another deer, but couldn’t come up with anything. At that point, I started playing mind games with myself, thinking that maybe the buck was not as big as I thought. 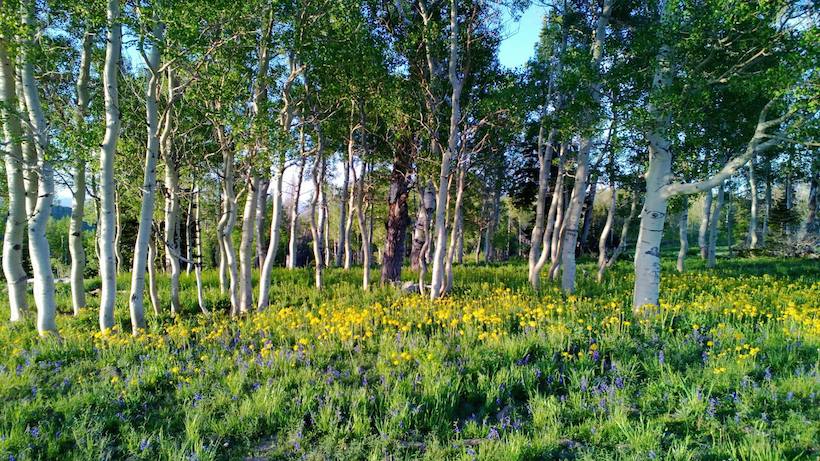 Eventually the buck fed up into a sea of aspen and out of sight. I sat there trying to decide what my next move should be when I caught movement in the direction of the buck that had just disappeared. The buck I had been watching fed back out into the meadow, this time followed by a doe. A few minutes later I saw another deer moving through the trees and as soon as he cleared the line of trees I was able to see those long main beams diving off at the tip, and knew it was my buck. 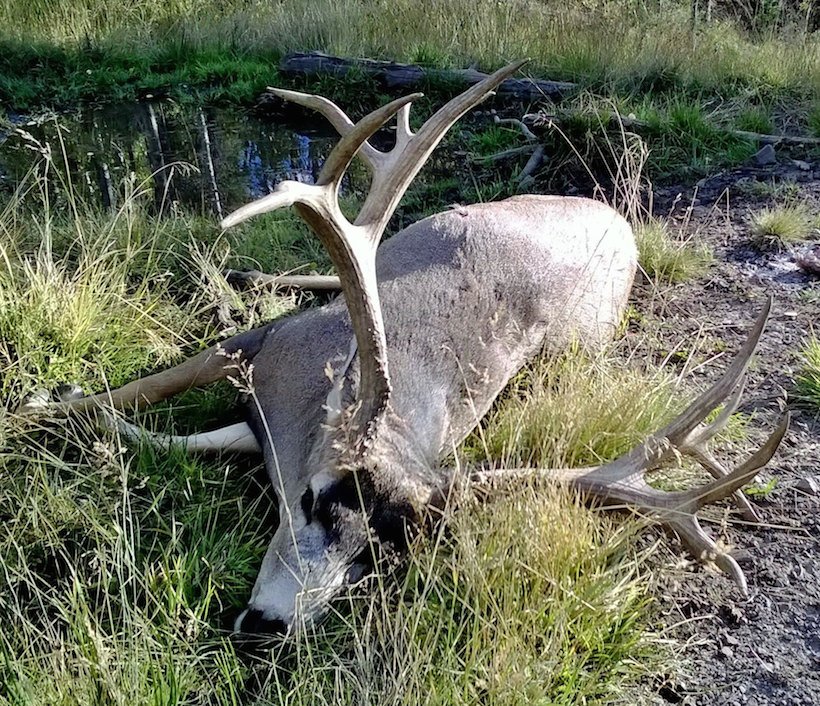 I already had my muzzleloader to my shoulder and a dead rest in the notch of burned mahogany. He walked steadily into the meadow and at 82 yards I squeezed the trigger and he collapsed. 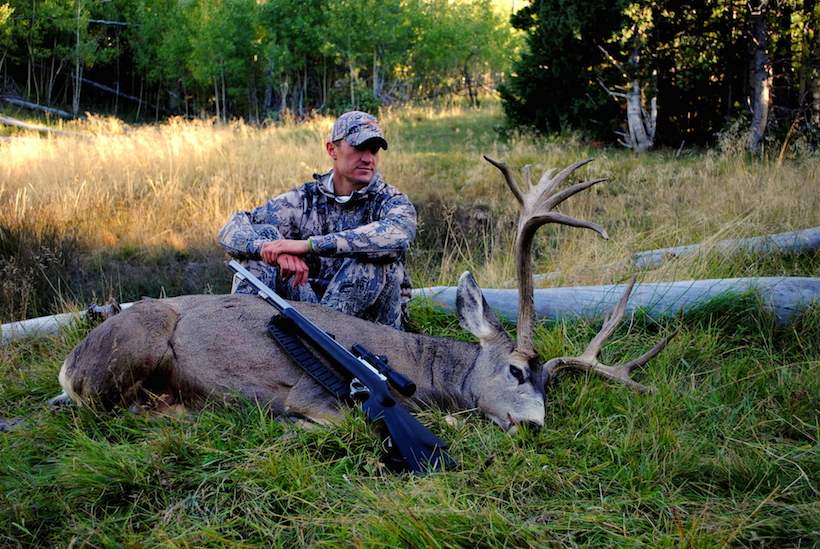 I managed to captured a few photos of the buck before dark. 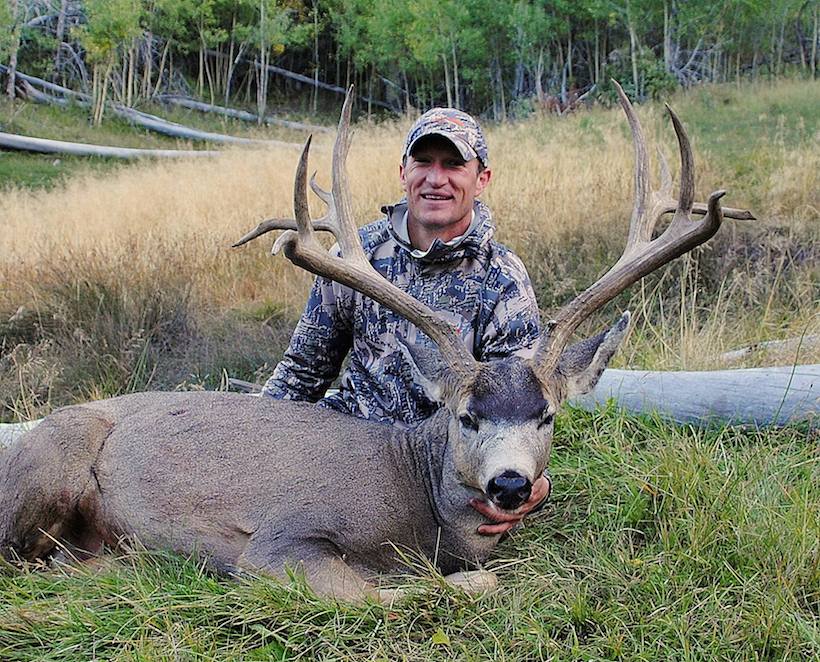 After cleaning him, I made my way to my bivy and loaded my camp. Once again, I packed out in the dark and spent the night next to the truck. The next morning, and again in the dark, my friend Ryan met me and we made the trip back up the hill with empty packs. 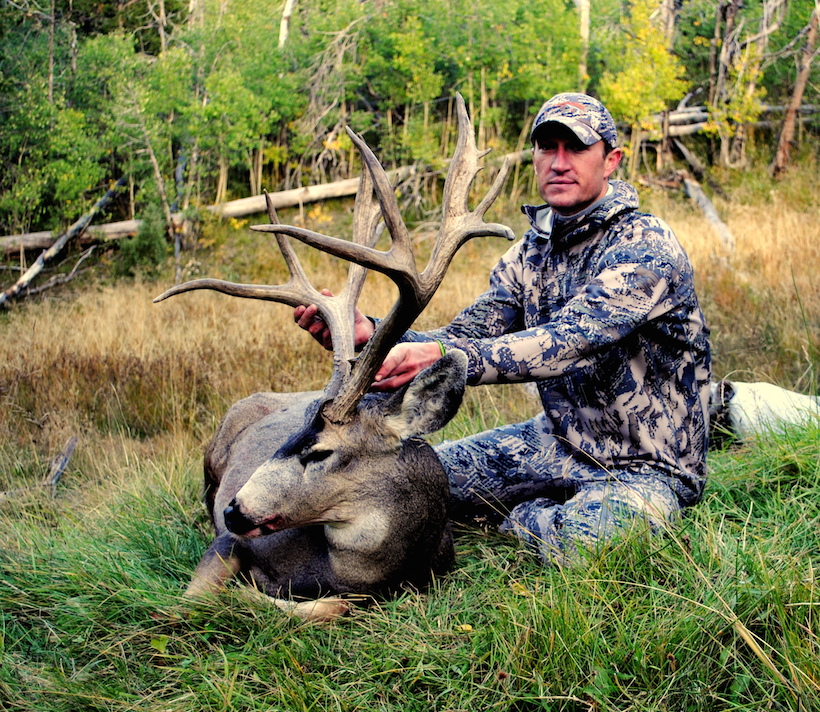 We spend the morning taking pictures and packing him out. 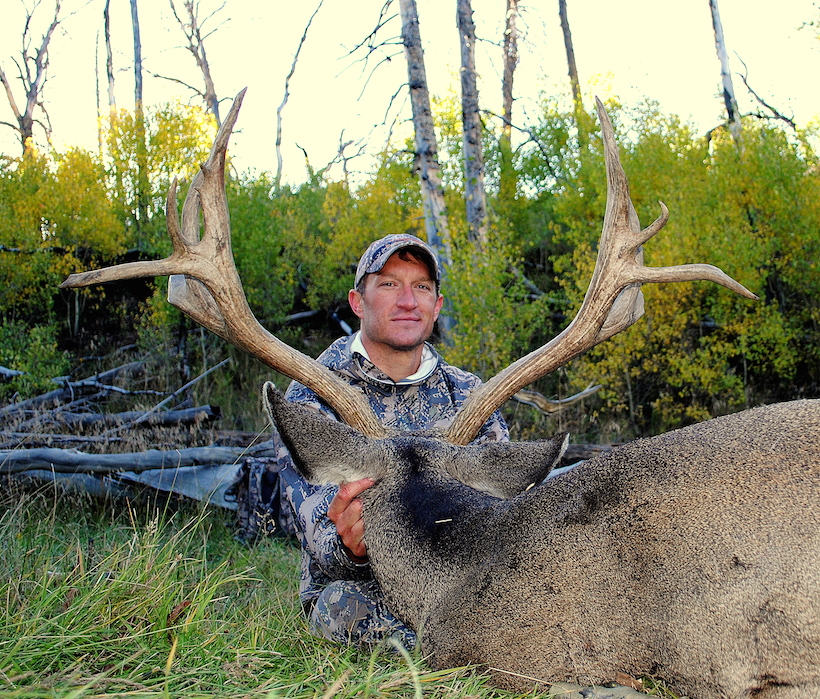 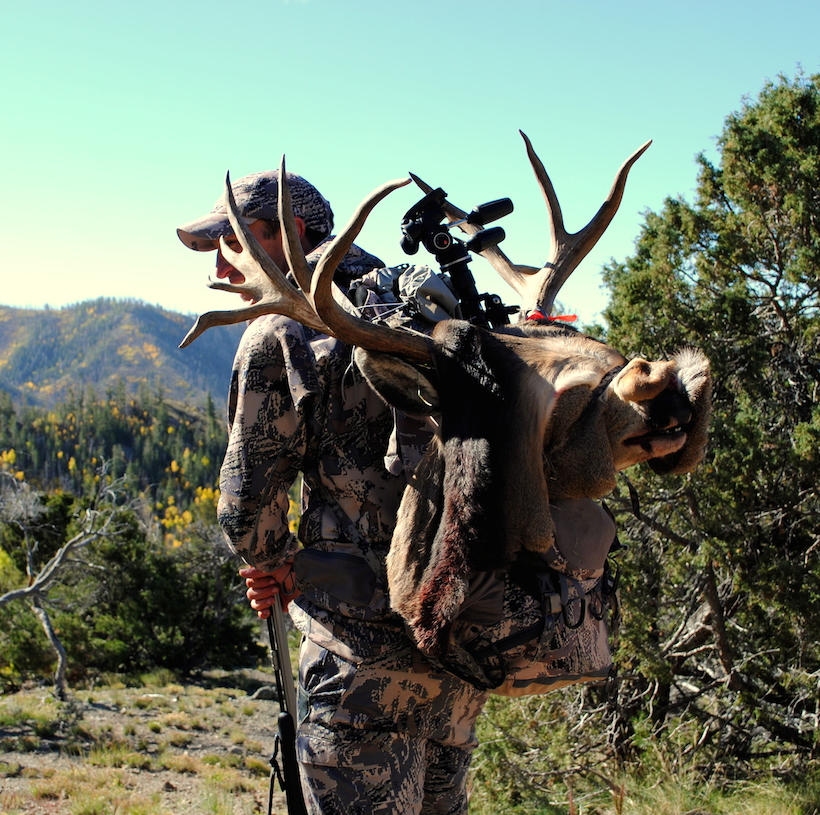 I hunted a total of 16 days by myself to get the chance I needed to take this buck.