One week, one mule deer

This hunt has become an annual tradition for me. Early fall was normally spent bowhunting antelope and elk, and then after a busy work schedule in October I get a lot of free time to bowhunt mule deer during the rut. Bowhunting in November adds a lot of challenges, especially since the general rifle season is going on at the same time. So finding less pressured areas are key. This hunt would be the same as years past … cold and once again I would be hunting solo.

Prior to my hunt, my truck had been in the shop for two weeks with repairs. This delayed my hunt for four days. 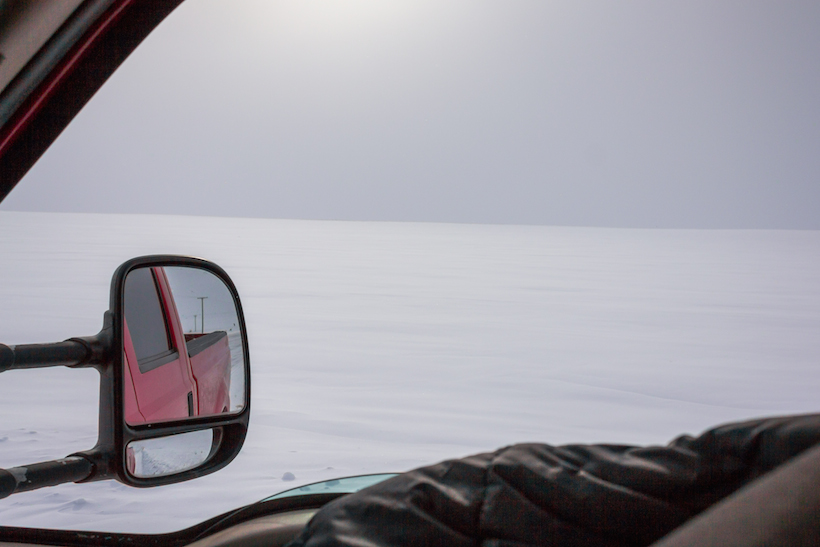 It was November 19 when I finally had my truck back. After that ordeal, my hunt started off rather smooth because I barely beat the heavy snowfall that was predicted to occur the following day. 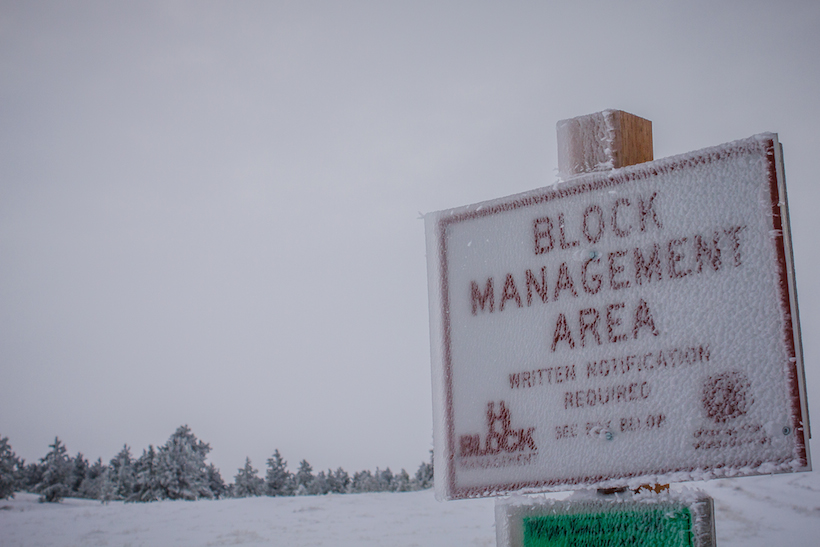 I drove through the night and arrived around 2 a.m. in the morning. Temperatures had dropped to single digits and the weekly weather forecast was calling for a high of 15 degrees and lows hovering around zero. I organized my gear and prepared myself for an uncomfortable night sleeping in my truck. I was eager to head off in search of November mule deer in the morning. 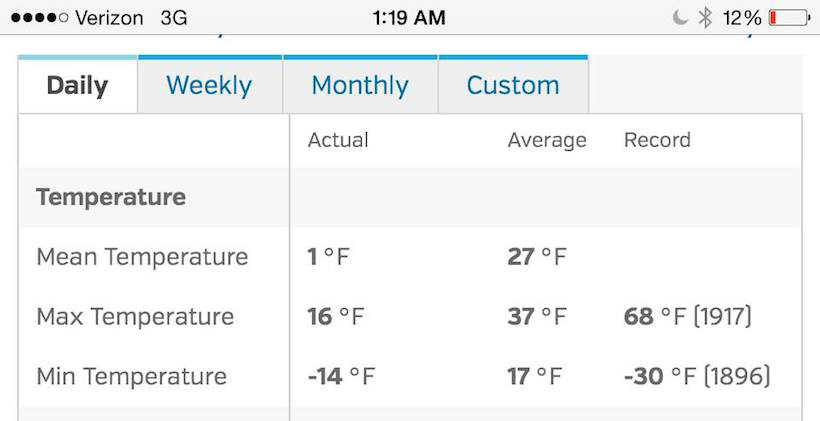 The morning started off brutally cold. The temperature on my phone read 2 degrees Fahrenheit. I kept extra clothes in my pack at all times and utilized multiple handwarmers in my down mittens to keep warm. 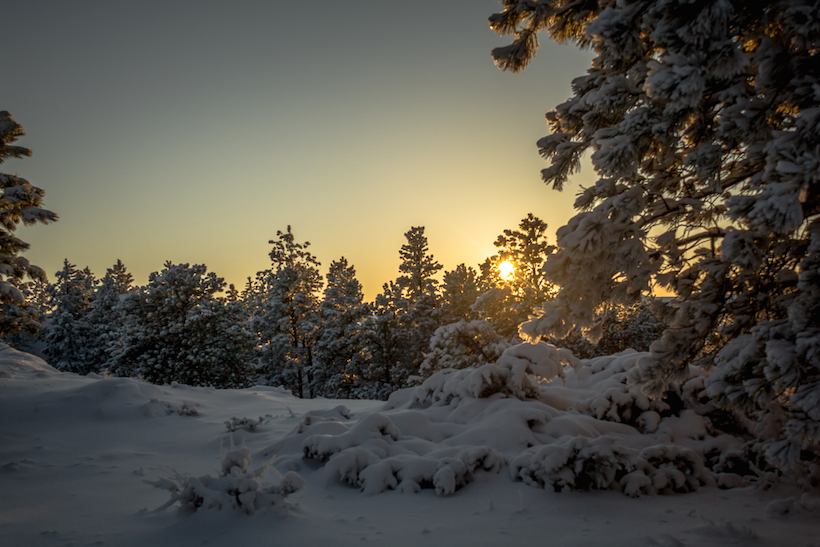 I hiked out to my pre-determined glassing knob early in the morning and got into position 20 minutes before first light. It was time to layer up and prepare for a long morning behind the glass in the cold and wind. I started off the morning by watching a few does and fawns feeding in the early light. I knew it would be a great day to catch a buck on his feet because of the cold temperatures. 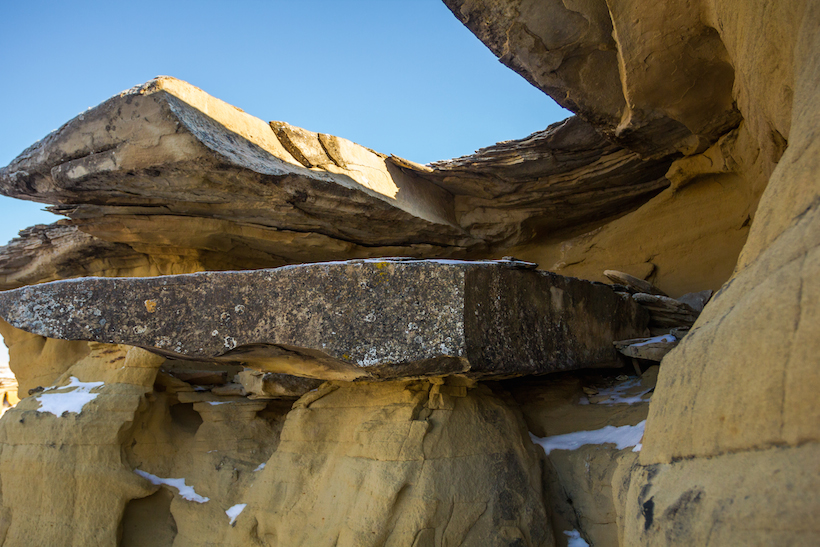 I am always amazed by Montana’s terrain. Around every corner there seems to be another photographic moment. As I sat there glassing it made me wonder who else used this as a glassing point for mule deer back in the day. 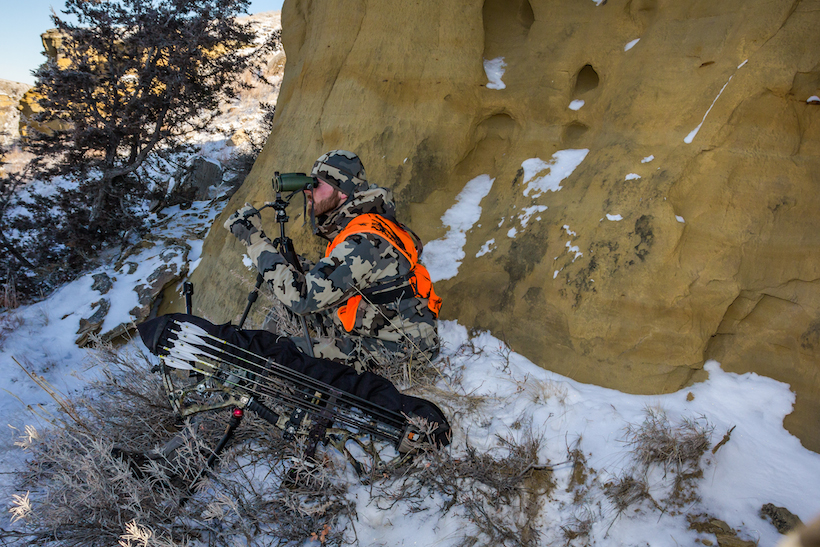 Sometimes it is better to be lucky than good. I’d say I had a little luck on my side during this hunt because the first morning I laid eyes on a great buck. For this area he was an exceptional buck, especially for a late season archery buck. I decided to play it safe, focus on only this deer the remainder of the week, and pattern him before trying to make my move. 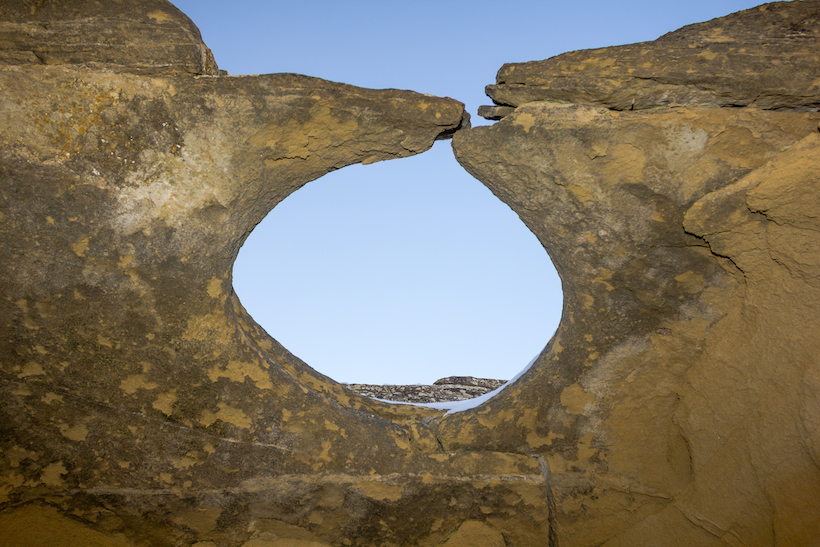 Normally it takes me a few days of glassing to pick up a quality deer and then I have to scramble to make things happen with my hunt coming to a close. I spent the rest of the week hunting this one deer. This buck was with five other does and two smaller bucks. It was this reason that I needed to play it safe with my approach and wait for the perfect opportunity. I had time on my side in a sense. 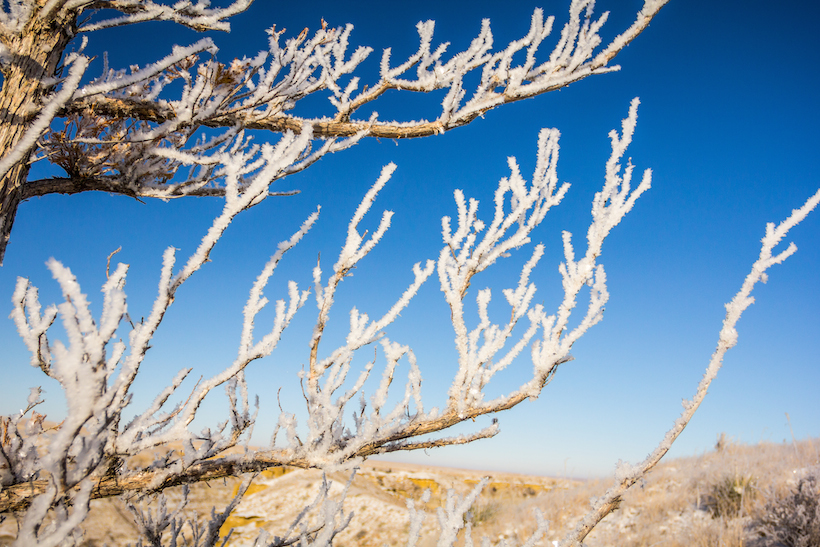 It was early in the week, and soon enough weekend hunters would be out hunting as well. So I had a few more days of playing the waiting game. The wind started to pick up during the evening, causing the snow to create whiteout conditions while I was glassing. This wind caused snow to blow off the ridge tops which will make the deer a little harder to see tomorrow at longer distances. 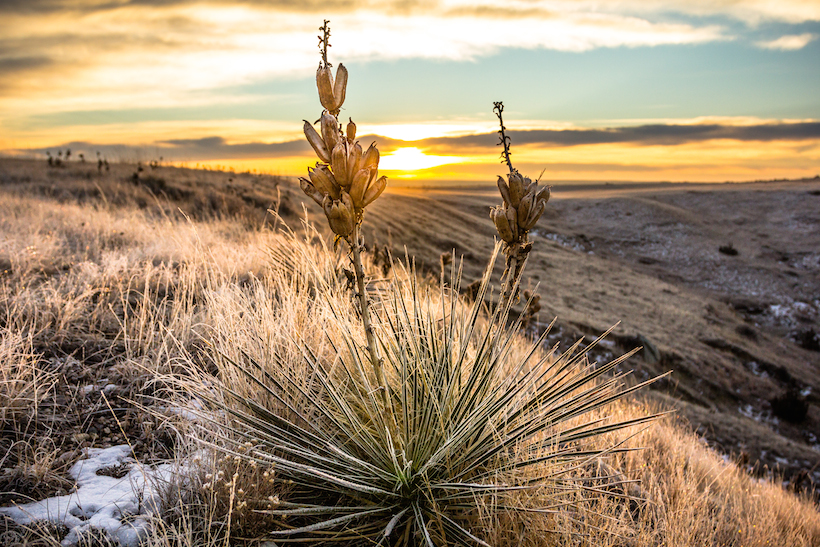 It was a picturesque moment as the sun began to rise on day two. Warm colors flooded the sky and painted the hills below. Soon, I started to see the telltale sign of small brown objects moving amongst the sagebrush. 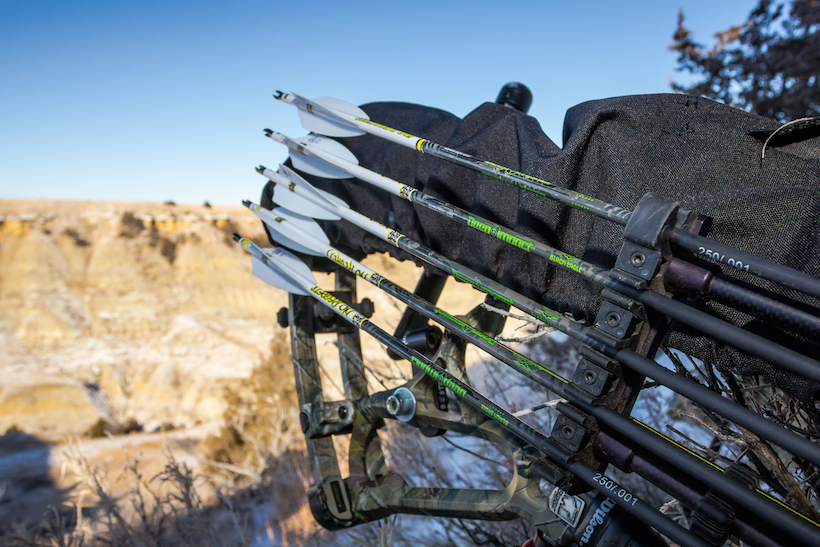 My gear was put to the test in the cold and held up great. What really surprises me is the temperatures these animals face during their mating season. 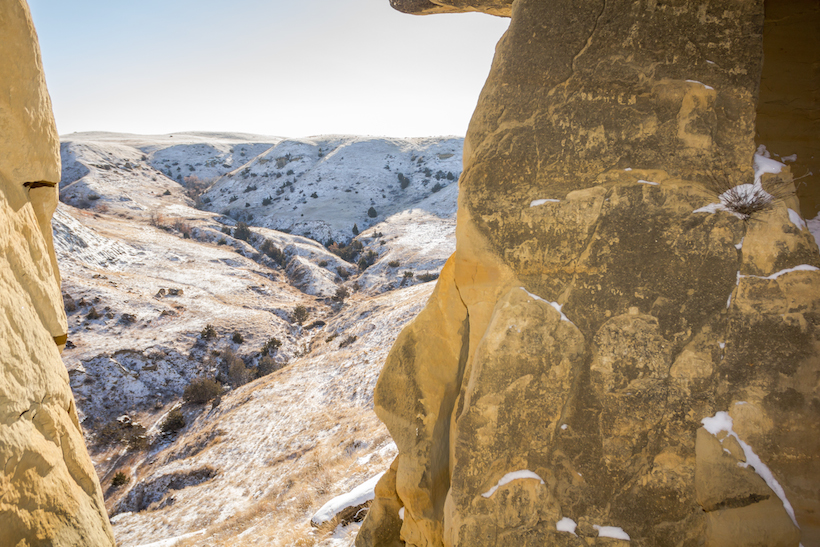 Once again I was able to locate the buck and his harem of does. I was able to utilize a rocky cliff band to glass three different coulees. I just needed to maneuver through the broken rock “tunnel” and I could appear on either side to glass. 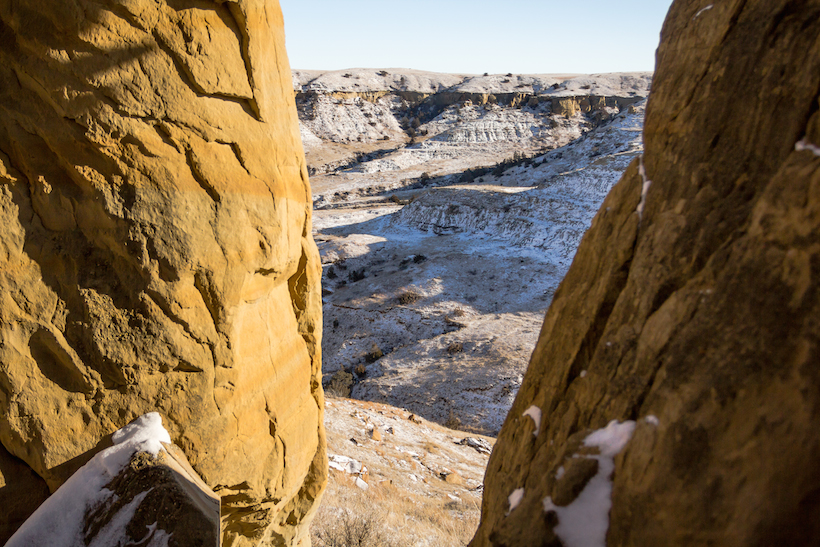 A view of a different drainage I could glass from inside the rocks. 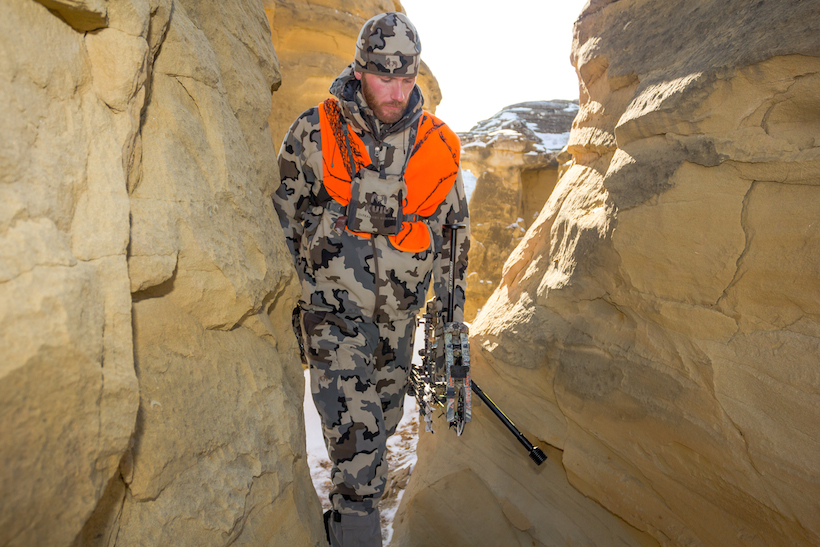 This “tunnel” really helped when it came to concealing myself from the buck and also gave me a chance to warm up out of the wind. The area I was hunting had broken terrain on Bureau of Land Management and Block Management ground. Luckily, a lot of it is tough to access and I’ve never seen anyone else backpacking the area. 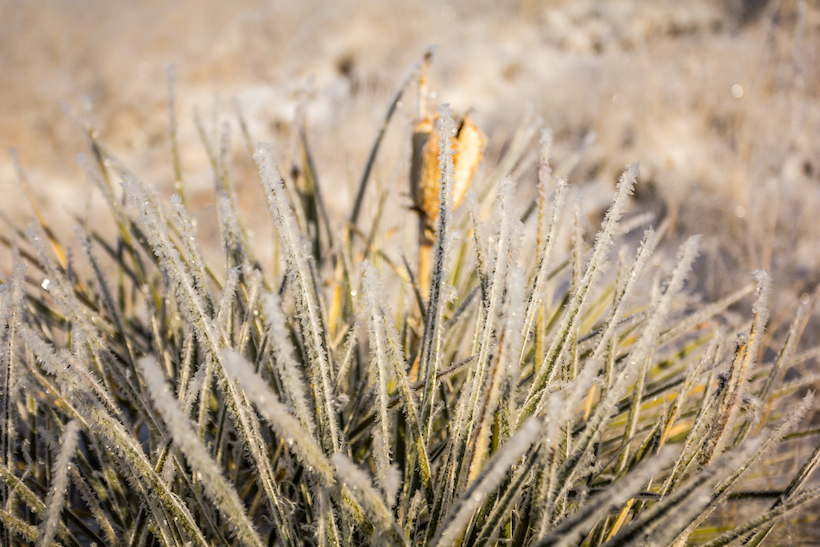 Extremely cold mornings and fog made for some great photo opportunities on my mule deer hunt. Every moment spent bowhunting is special to me. 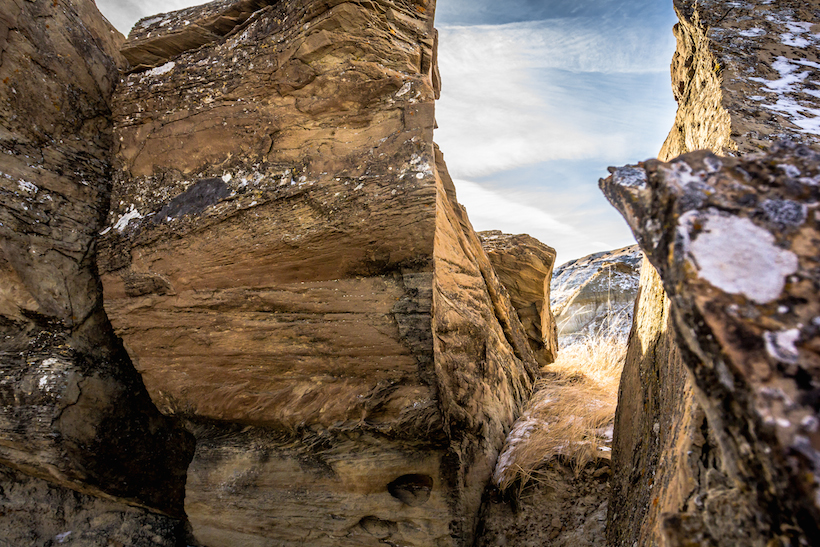 The morning of the third day the buck seemed to be moving toward an area that might present a shot if I could reach it in time. I quickly left my glassing position and worked my way out of sight of the group of deer.

Cautiously I worked my way along the rocky ridge being careful not to skyline myself. Another 40 yards and I would be in position. The buck was scent-checking does 150 yards to the west of me and working its way closer. I almost spoiled this entire hunt earlier in the week when I got too close to a few does. Luckily, they just ran across the canyon and the buck trotted behind them in an effort to grab them. This time I kept my composure and played it safe. 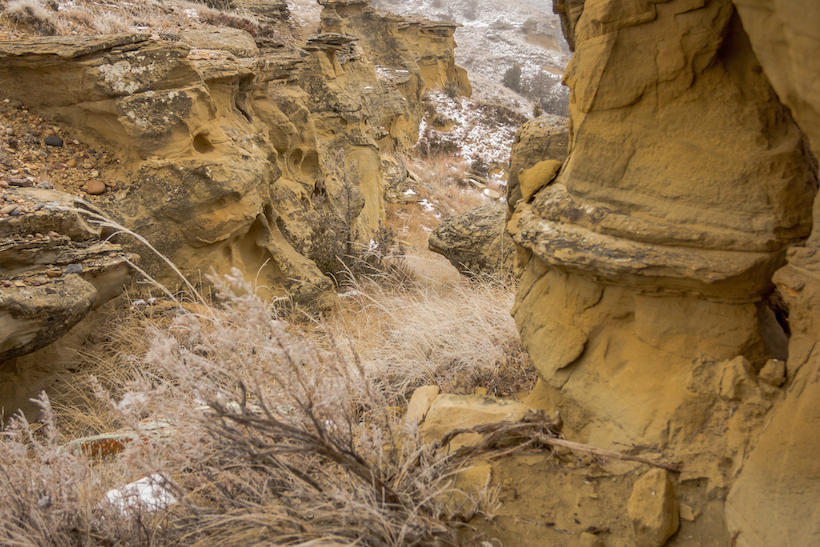 My patience was rewarded. The buck walked below me and didn’t have a clue I was perched above him in the rocks. Carefully, I came to full draw and allowed the string to come to rest at the draw stops. I leveled my sight and brought the pin down on the buck as he was looking over his does. The shot was true in the cold November air. 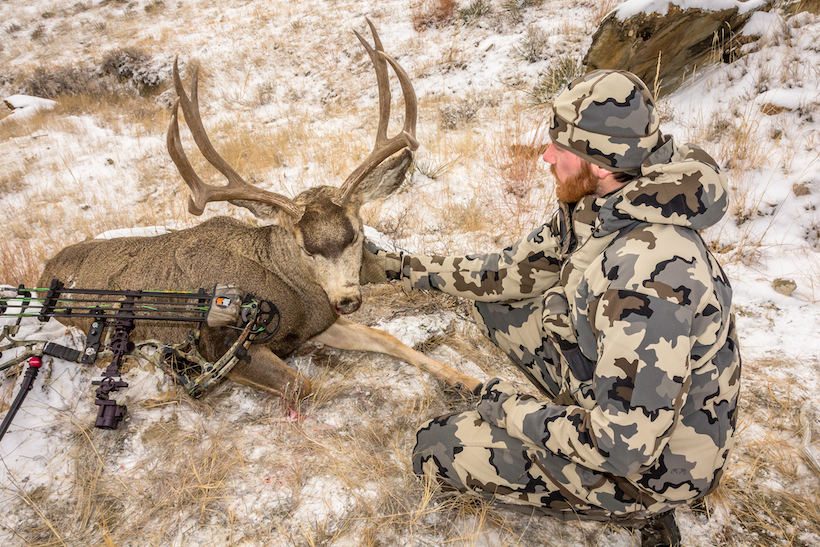 I am always overwhelmed with emotion when I finally get to lay my hands on the animal that I have been pursuing. It's an amazing feeling to put a close to this hunt after a hard week of patterning him and watching an old mule deer in his natural habitat. 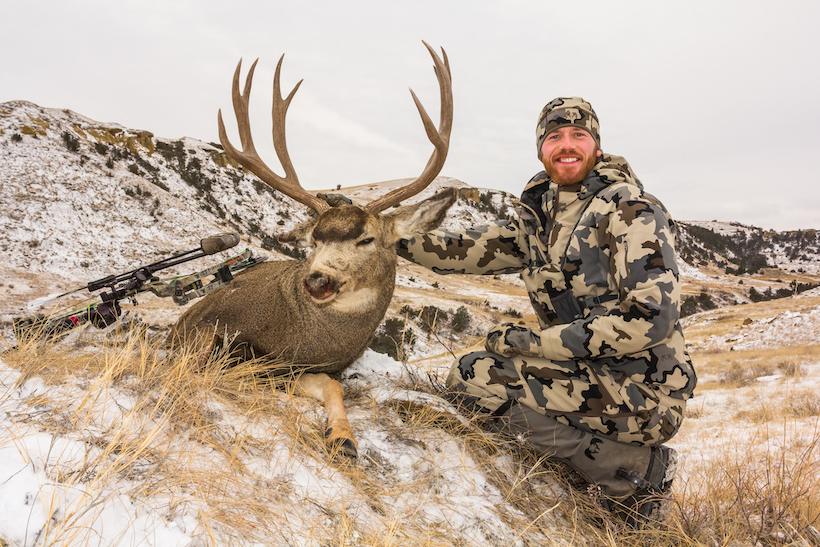 It is time like these that you truly appreciate focusing all your attention on hunting one animal and getting to watch him all week long. Taking a buck like this with my bow is what fuels my passion throughout the year. This is proof that hard work and patience can yield great results when it comes to bowhunting. 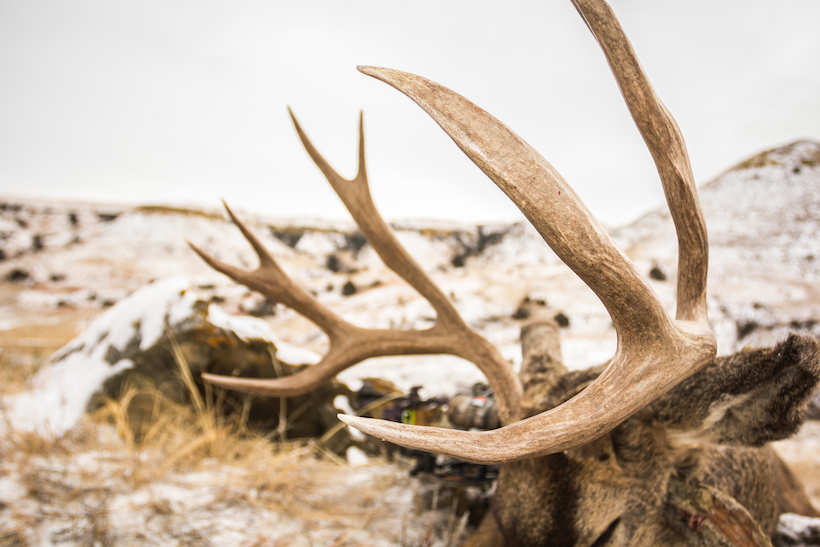 Moments like this are ones you can re-live over and over. 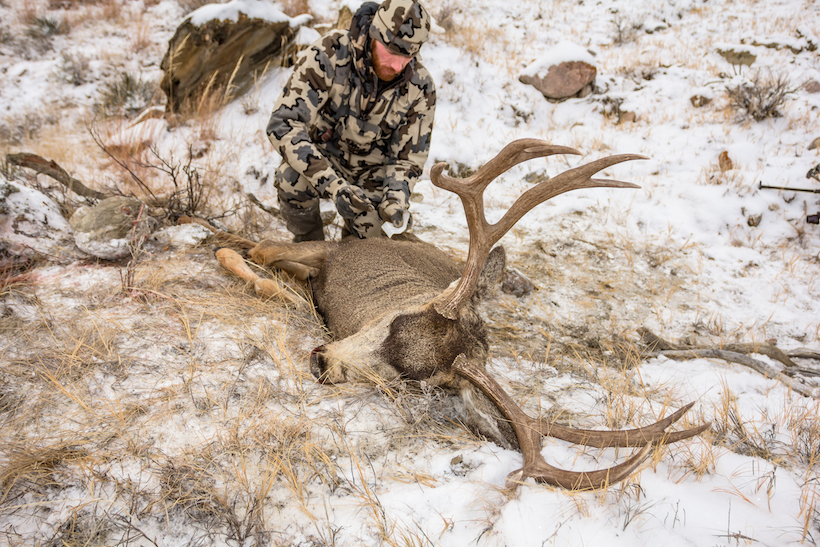 Cutting out this tag after pursuing this buck during a cold week of bowhunting felt extra special. 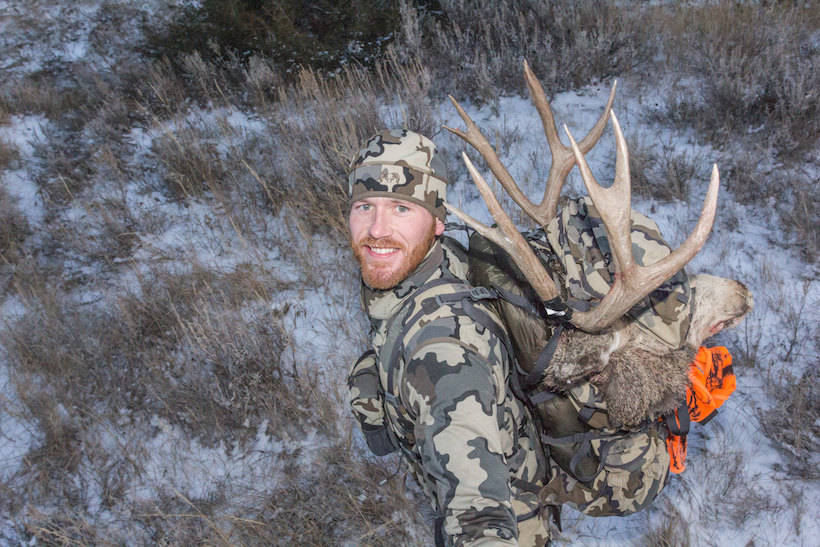 Packing out my archery mule deer in the single digit temperatures, frozen beard and all. I packed the completely boned out mule deer in one trip with my camp and gear. It was a long and slow three mile hike out, trying not to sweat too much because of the freezing temperatures. In the end it was worth the effort.